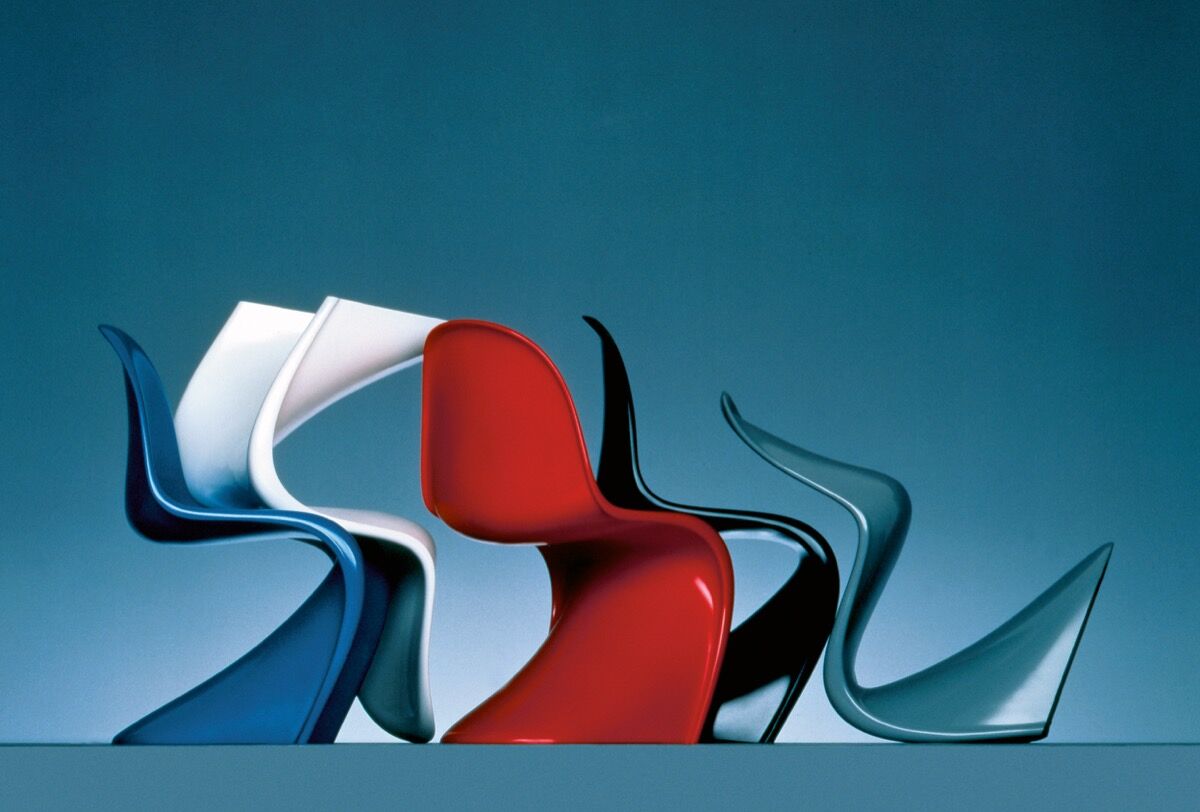 Many legacies are measured in the abstract—words, victories, concepts. Some leave their mark with the tangible. But a rare few leave behind a vessel that serves as a spring of wisdom for future visionaries to tap into. In the case of
Verner Panton
, he left us with the S-chair.
Ida Engholm and Anders Michelsen’s new book, Verner Panton, charts the legacy of the revolutionary Danish designer. The monograph, published by Phaidon, opens with a quote from Panton: “A less successful experiment is preferable to a beautiful platitude.” That notion, of the importance of taking risks to create meaningful design, encapsulates the sensibilities that steered his dynamic career.
Panton, who passed away in 1998 at the age of 72, aggregated a portfolio of furniture and interior design characterized by a striking visual identity synonymous with the neo-avant-garde principles of the post-war generation in Europe. Woven organically into the fabric of the 1960s, Panton’s creations became an iconic fixture of 20th-century design. 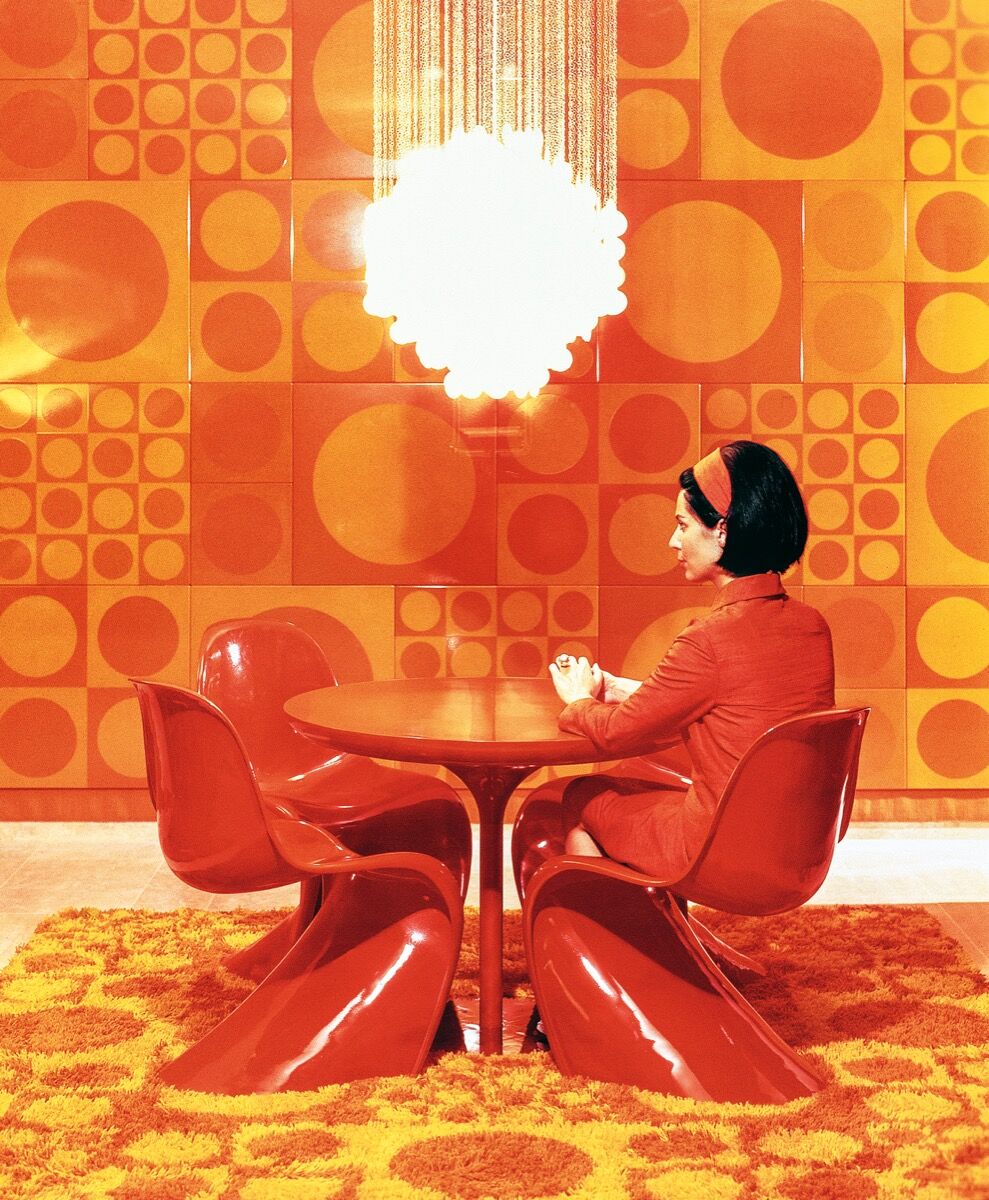 Marianne Panton on The Panton chair, with The Shell Lamp, and a Unika Vaev rug, 1967. © Panton Design, Basel. 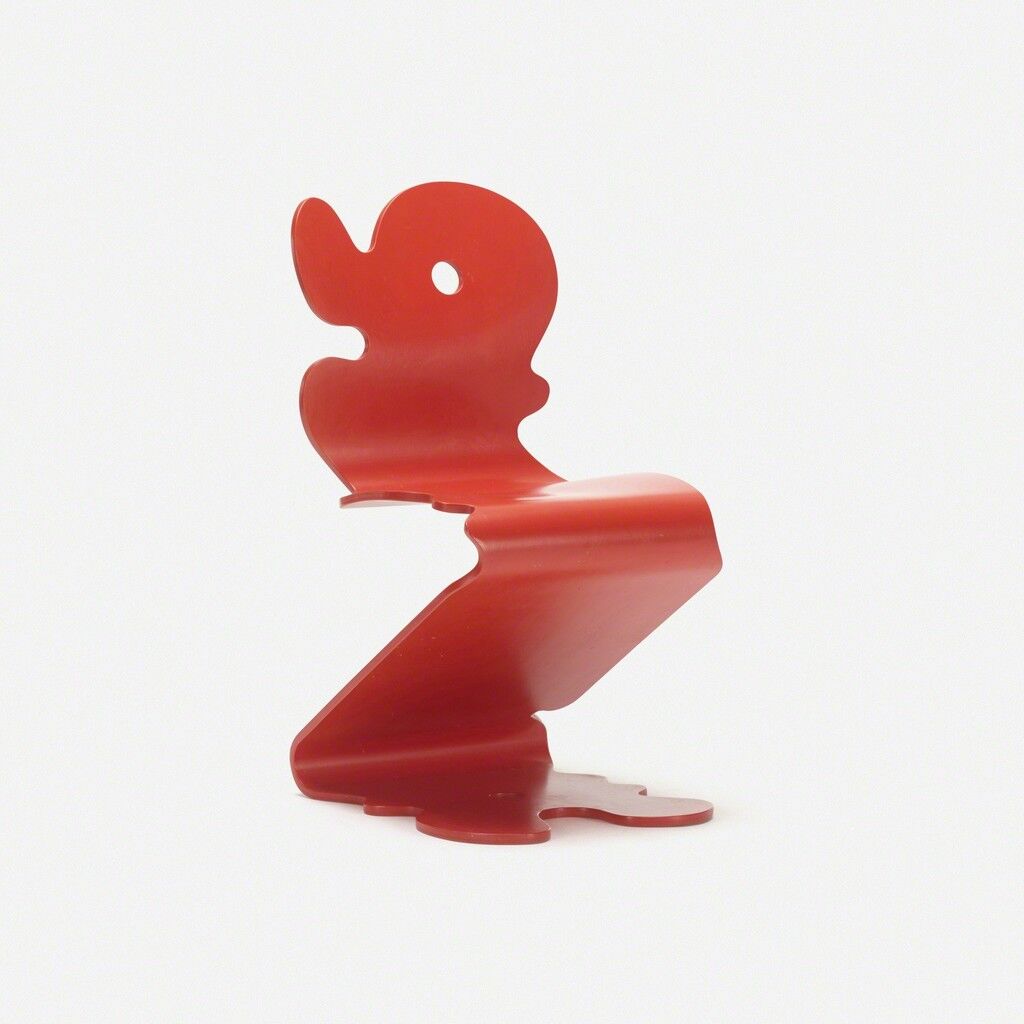 Verner Panton
Pantonic 5010 chair, 1992
Wright
The centerpiece of his sprawling catalog, the Stacking Chair, or S-chair, burst onto the market with its unprecedented legless construction and remarkable stackability—a modular idiosyncrasy at the time that is now far more ubiquitous. The chair’s sumptuous curves reflected Panton’s own fascination with the female form, with lines reminiscent of the human form—particularly the tongue.
The first chair in history to be constructed from a single piece of plastic, the S-chair’s design has aged into the culmination of Panton’s own visual vernacular, which was informed heavily by the expressive languages of architect and furniture designer
Alvar Aalto
and architect Erich Mendelsohn. In Panton’s early days, an insatiable hunger for experimentation resulted in designs composed of then-iconoclastic materials such as plastic, steel, plexiglass, and even foam rubber. Creations like the inverted Cone chair in 1958 demonstrated Panton’s innovative approach, while the design of his Peacock chair in 1960 gained notoriety for its simplicity. The Peacock chair, which was crafted as a semicircular seat on a cylindrical base and featured adjustable tilt, further indicated Panton’s ability to stand out in the marketplace. In his portfolio of whimsical and revolutionary designs, which ranged from
Op art
-inspired textiles to light fixtures, Panton’s systematic approach is most evident in the long evolution of the S-chair, which underwent a number of prototypes of varying materials. 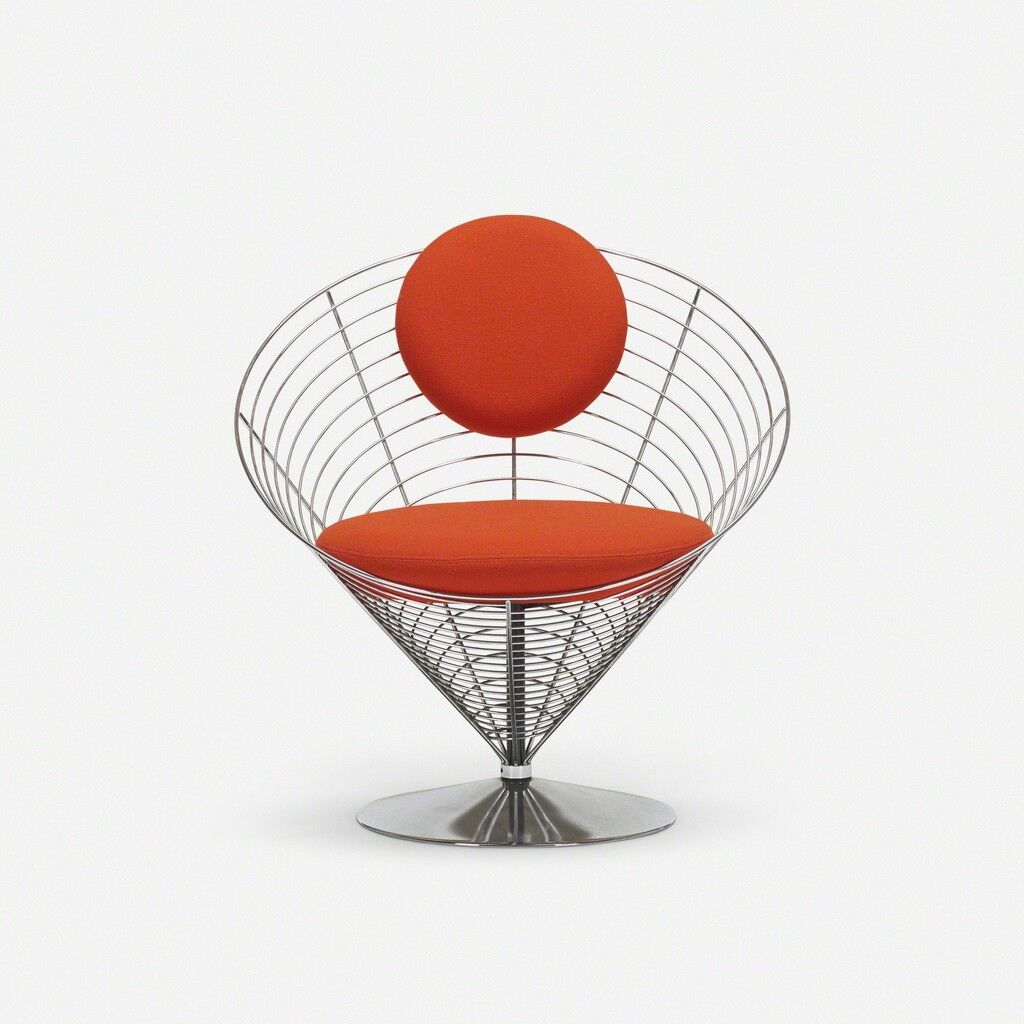 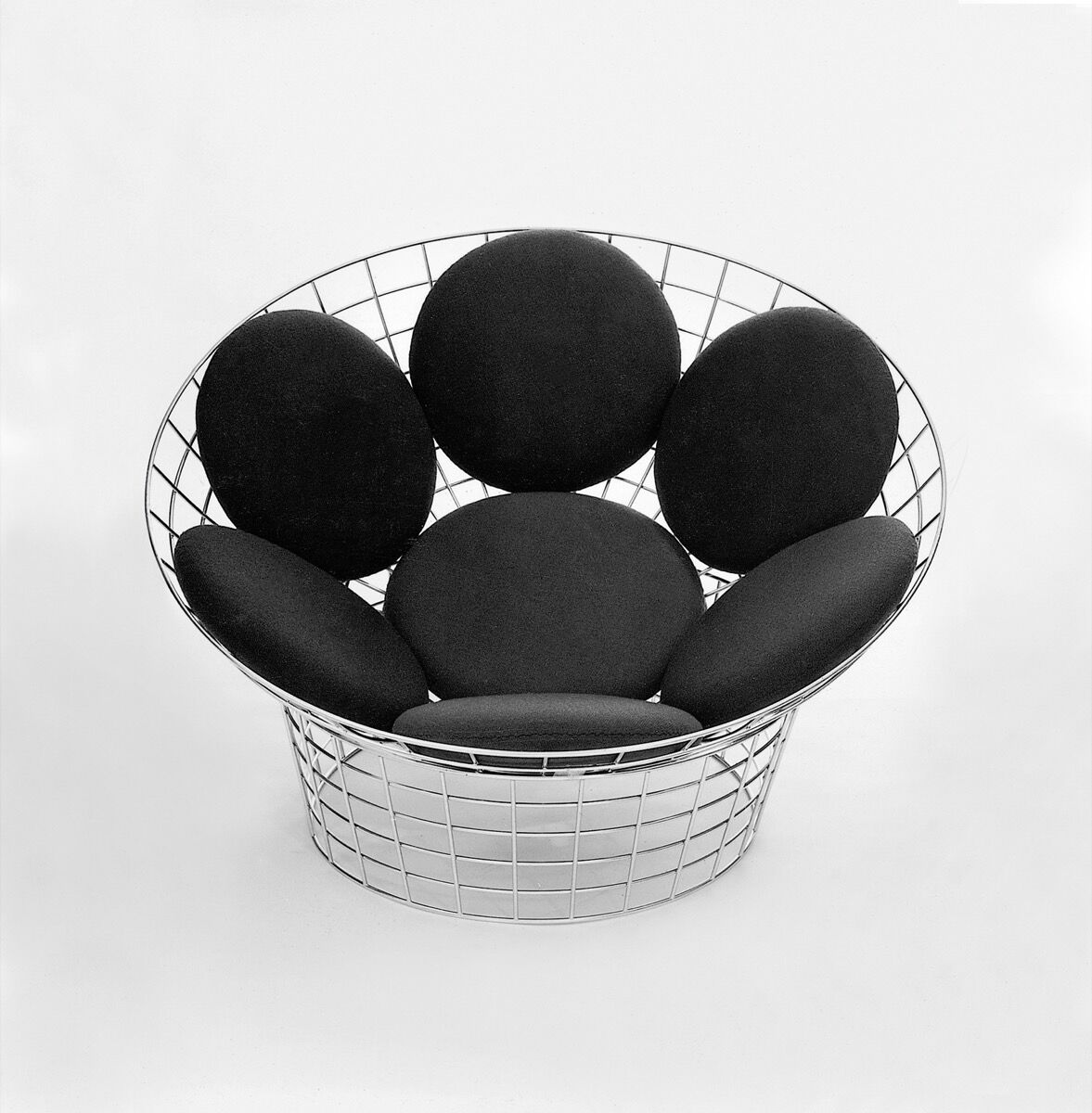 Advertisement
Panton’s trailblazing S-chair not only overhauled aesthetic conventions, it also elevated furniture design to a new technical standard. “It especially showed that a chair doesn’t need to be made of four legs, which opened a range of possibilities for new designers,” said Ana Milena Hernández Palacios, of the Valencia, Spain–based firm Masquespacio. “Panton was not afraid to take a risk in his designs, creating products that provoke a bunch of emotion.”
The S-chair was first cut from a single piece of plywood for its prototype form during the 1950s. Its earliest manifestations were produced in 1965 by Austrian-German manufacturer Thonet, and a select lineup was completed in fiberglass-reinforced polyester by 1967. With his reputation fully solidified on the global stage, Panton officially debuted the S-chair at the Cologne furniture fair the following year to superlative reception—though despite the favorable attention, numerous distributors initially rejected the design. It was Swiss furniture manufacturer Vitra that finally invested in Panton’s chair, which soon became the shimmering jewel of Danish design.
Although lauded with the distinction as the first chair manufactured in molded plastic, the S-chair with not without its warts. It was heavy, and it was a challenge to manufacture due to the need for sanding and lacquering to be done by hand. Efforts to save costs and eliminate hand-finishing led to a steep decline in quality, but prayers were answered in 1971 in the form of a material known as thermoplastic polystyrene, or Luran S. The new, lighter chair design, which was injection-molded from pulverized colored plastic and required no finishing, was cheaper and easier to produce. It also boasted new ribs installed at the point of transition from base to seat to further solidify its structural integrity. 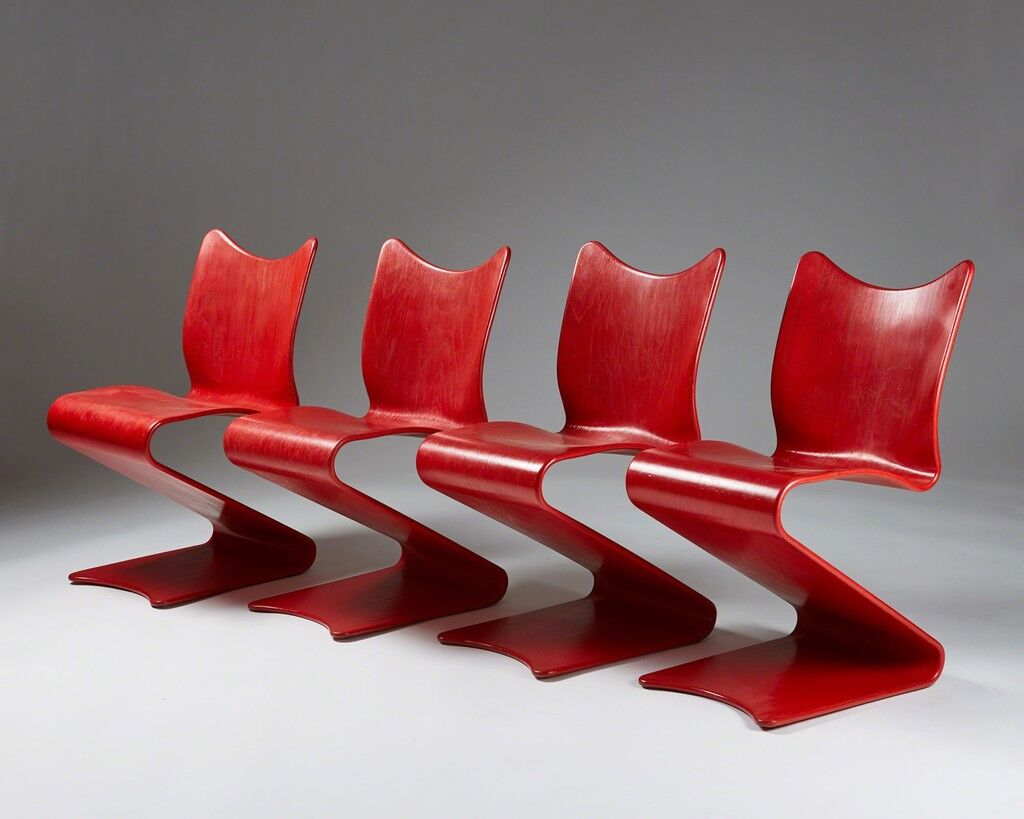 Verner Panton
Rare set of four chairs
Modernity
As the 1970s progressed, midcentury style retreated from the forefront of the zeitgeist as postmodernist and
Memphis
movements found their footing. The spotlight faded on the S-chair, which would soon face an 11-year production halt in 1979, due to the depreciation of the polystyrene material. But the 1990s saw a resurgence in popularity of midcentury modernism, and the S-chair reemerged as a highlight in revisionism of the period. The design was even featured with model Kate Moss on the January 1995 cover of Vogue UK. With the S-chair back in production, Panton was tapped to design an exhibition on his portfolio at the Trapholt Museum in Denmark, though he wouldn’t live to see it. It opened to the public on September 17, 1998, just days after his death.
Today, the licensed S-chair is still available through Vitra for roughly $310. But Panton’s most widely distributed seating design has also inspired a number of imitations—contemporary reinterpretations of the S-chair retail for nearly one-third the cost of the real thing. Despite its ubiquitousness today, its inviting shape once evoked a sense of rebellion synonymous with Panton’s desire to shatter convention, casting him as a sculptor more than a designer. The radical S-chair is a reminder of Panton’s ingenuity in transforming an action as automatic as taking a seat.
Will Speros
Related Stories