The Victorian Artist Who Painted Fairy Worlds from an Asylum 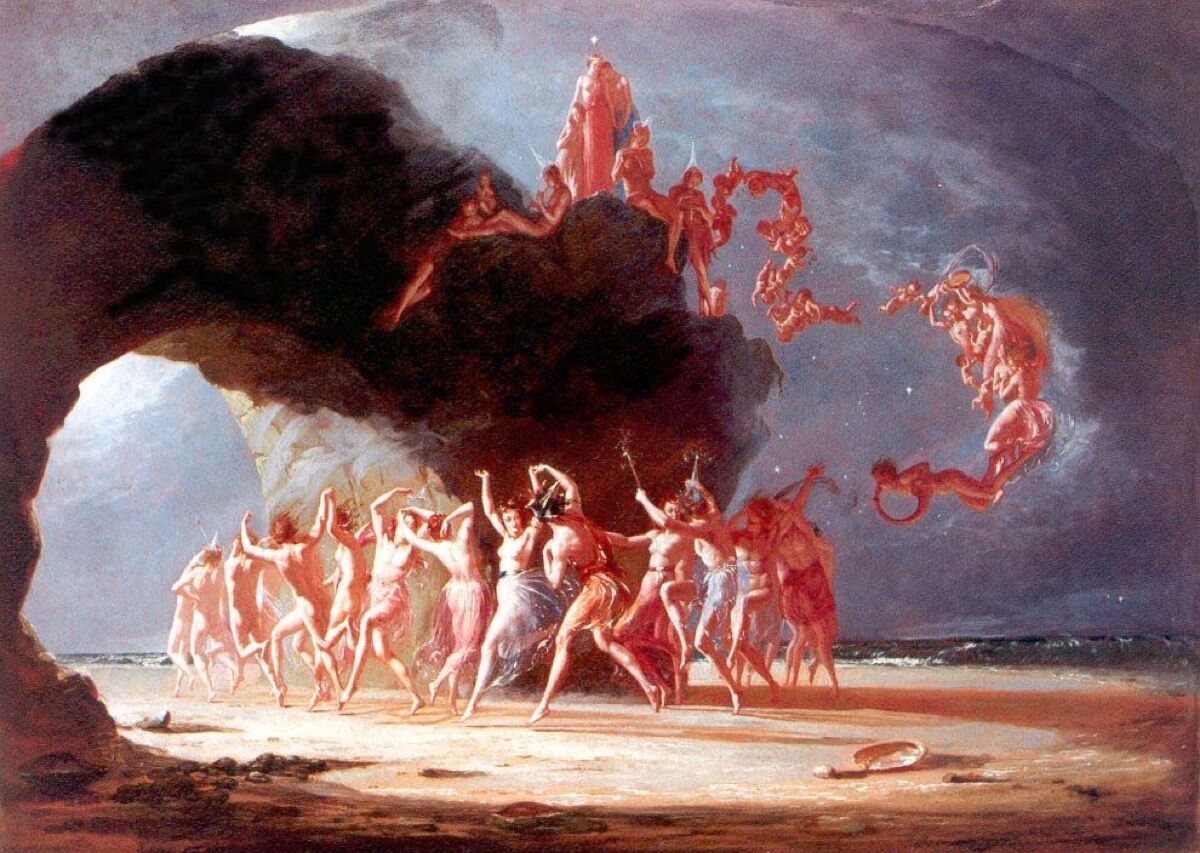 The Victorian artist
Richard Dadd
painted exquisite, highly detailed canvases filled with fairies and other magical creatures. In his best-known work, The Fairy Feller’s Master-Stroke (ca. 1855–64), flowers, leaves, and stalks of grass unfurl across the canvas, giving way to a magical world of miniature figures in fanciful dresses and crowns. They gather around a brown-suited gentleman who’s about to cleave an acorn in two with an ax. Yet this central act of violence eerily corresponds to Dadd’s earlier misdeeds: In 1843, in a bout of madness, he killed his father, then assaulted a tourist on a train on his escape. He spent the rest of his life in institutions; the asylum became his studio, where he produced most of his imaginative paintings.
An 1878 census from the United Kingdom lists Dadd as both an “artist” and a “lunatic.” In Victorian England, the latter term was a perfectly acceptable catch-all for sufferers of mental illness. Dadd was hardly the first painter or sculptor with such a diagnosis. Indeed, philosophers and physicians have investigated the link between creativity and madness for millennia. Plato even philosophized about the topic in ancient Greece. Artistic inspiration, he believed, was God-given madness. From
Vincent van Gogh
hacking off his own ear to Sylvia Plath’s suicide-by-oven, many of our most lauded creative practitioners are, for better or for worse, also remembered for their intense manias and depressions. Dadd offers one of the most tragic examples of inventive brilliance coupled with (poorly treated) mental illness. 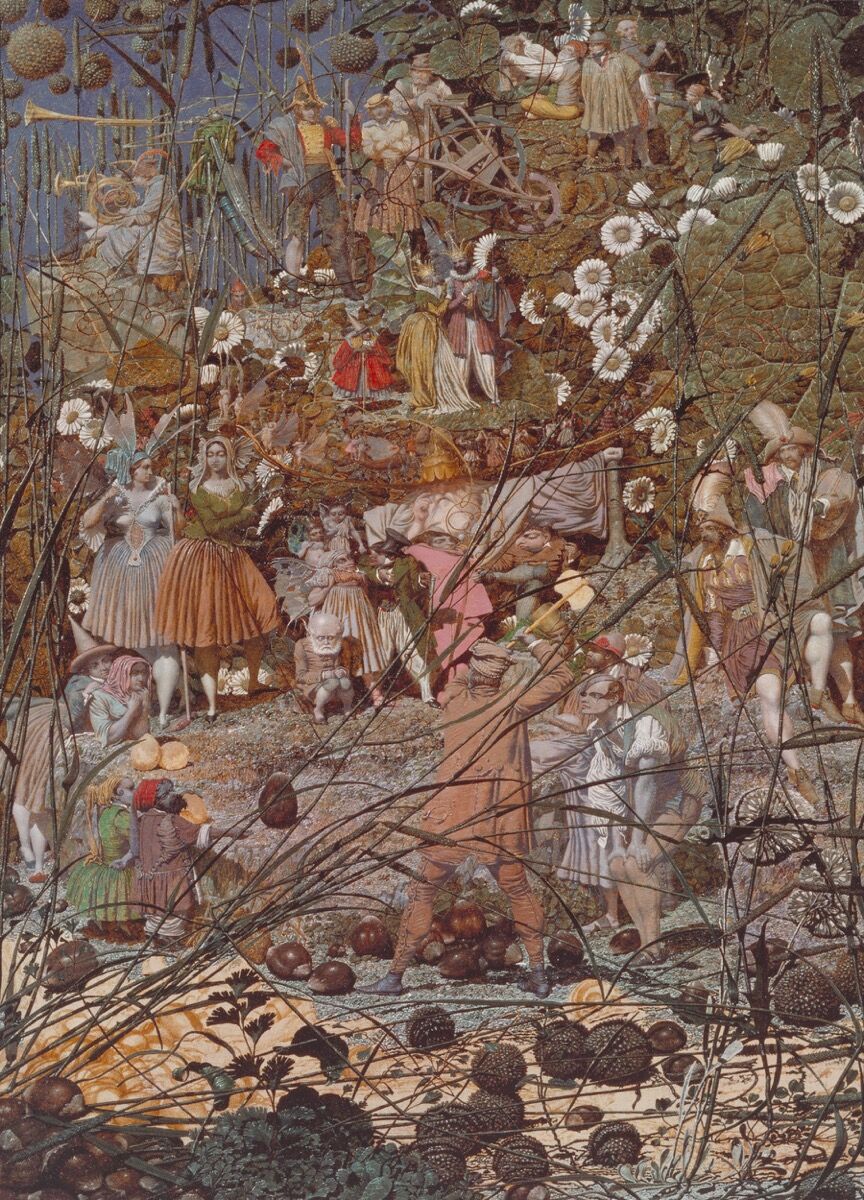 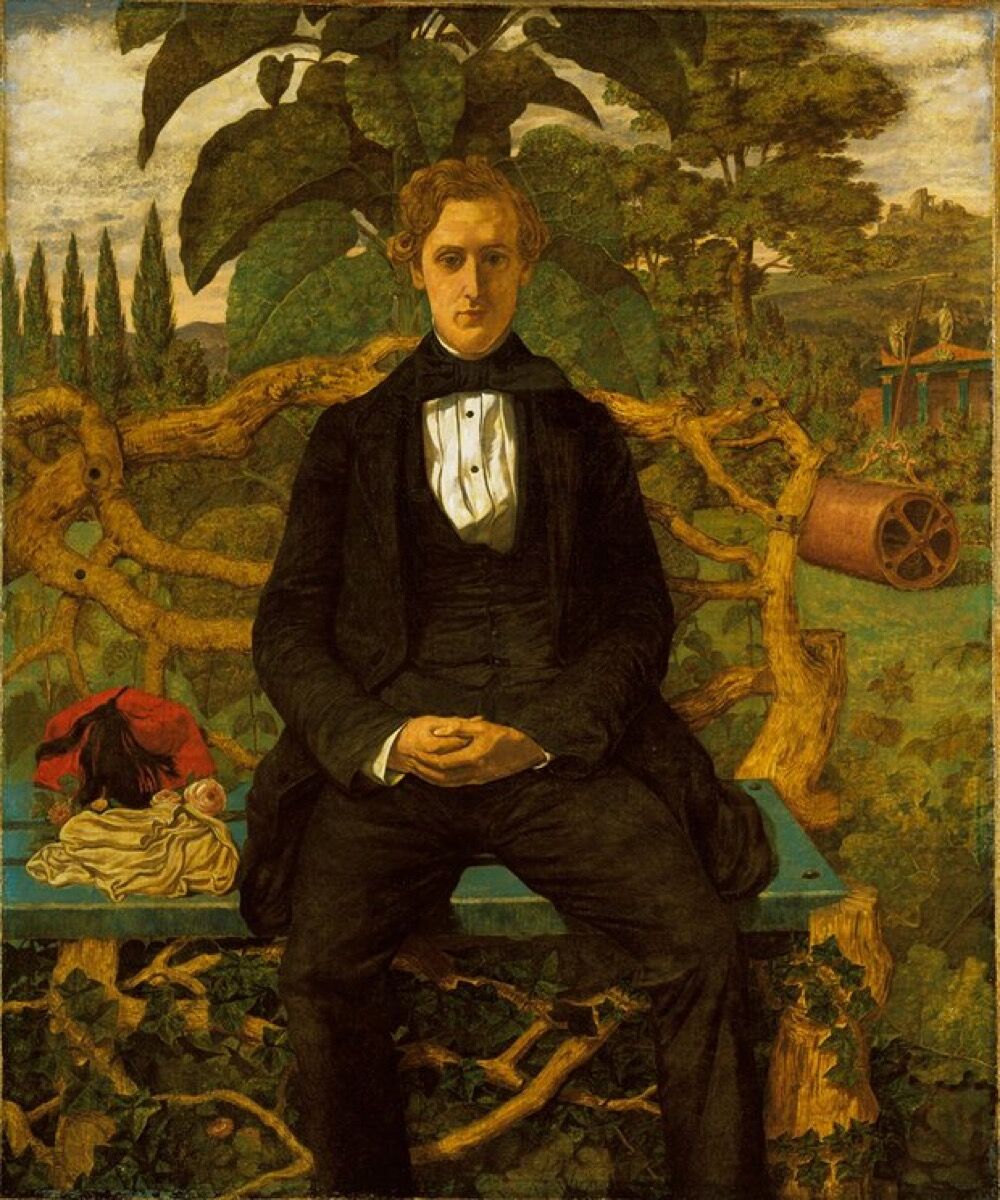 Dadd’s early life was unremarkable. He was born in Kent in 1817, and his family moved to London when he was 18. Two years later, he enrolled in the Royal Academy. Dadd became friendly with the up-and-coming painters of his day:
Augustus Egg
, William Powell Frith, and Edward Matthew Ward, among others. He received awards for his draughtsmanship, and during this time, he was focused on a fairly traditional series of Shakespearean illustrations. In the early 1840s, he painted fairies from A Midsummer Night’s Dream: Puck and Titania, the queen of the fairies. His 1842 canvas Come Unto These Yellow Sands takes inspiration from The Tempest. In sum, Dadd fit neatly into Britain’s well-heeled creative scene.
“I think he was very much of his time, right up until he killed his father,” Marc Demarest, who maintains a popular web page about Dadd, told Artsy. Demarest became interested in the artist after seeing The Fairy-Feller’s Master-Stroke at the Tate (where it’s in the permanent collection) in 2005. The obsessive detail, most of all, piqued his curiosity. “It’s not a painting that you can take in in 5 minutes or 15 minutes,” he said. “I still don’t know what it means. When you stand a foot and a half from it and peer into actual work, it’s pretty magical.”
Dadd’s life took its sad, strange turn during a trip across Europe and the Middle East with his patron, Sir Thomas Phillips. The pair embarked in July 1842, crossing the Alps and exploring Venice before setting sail to Greece, Constantinople (modern-day Istanbul), Cyprus, Beirut, and Jerusalem, among other cities. Dadd began suffering from headaches. After seeing impressions of the Egyptian god Osiris in Cairo, he also became paranoid, threatening Phillips; Dadd apparently believed he’d been tasked with fighting the devil. 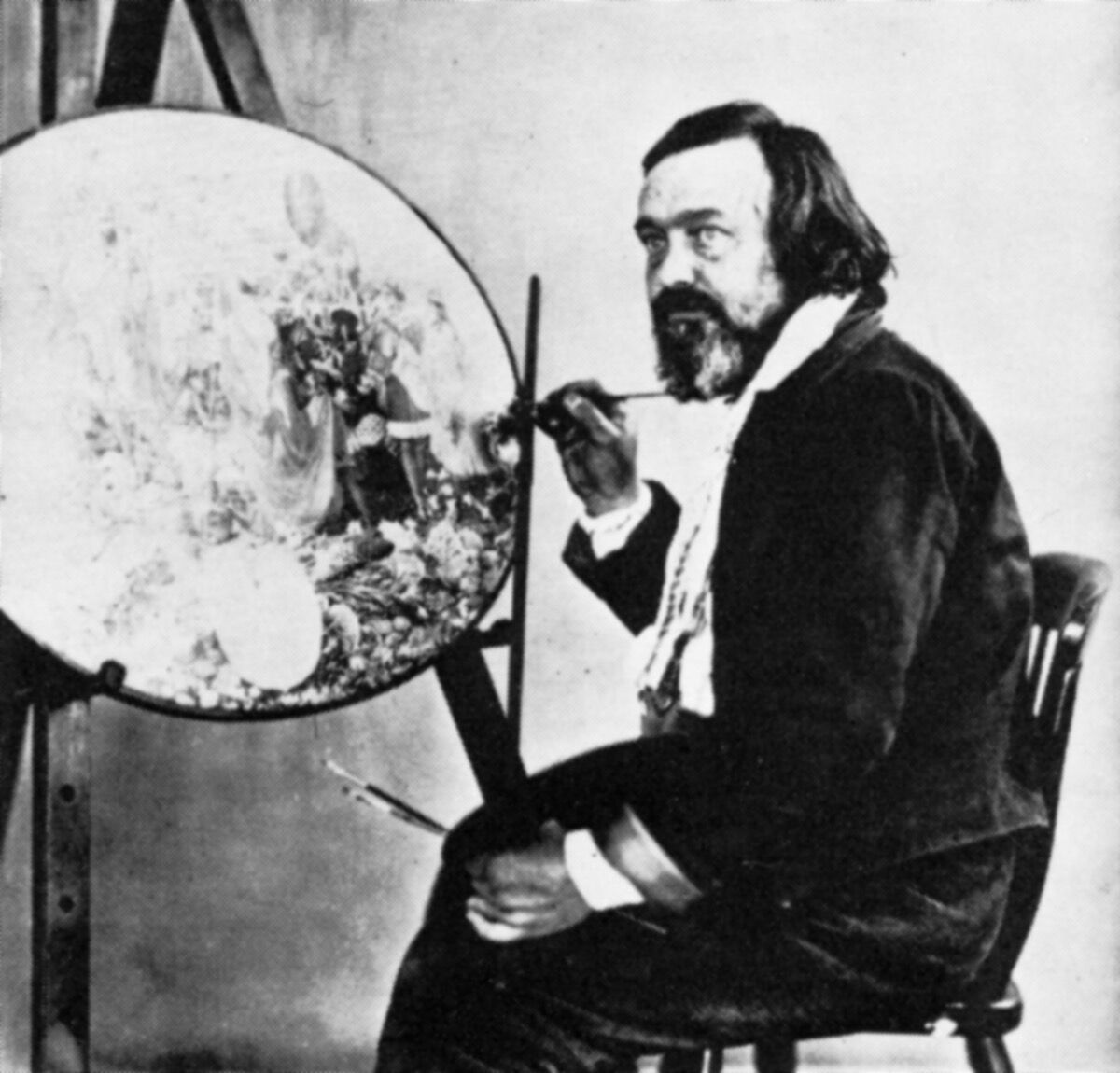 Advertisement
When Phillips and Dadd returned to London, Dadd’s father took him to St. Luke’s Hospital for Lunatics. A doctor judged the artist to be insane, though he protested. Father and son journeyed to Cobham (near the family’s first home), where Dadd Sr. may have urged him to accept treatment. Instead, Dadd Jr. lured his father to a park and, on their evening walk, killed him, slashing him with a razor and knife. Dadd fled to France, assaulting a tourist along the way, and then to Calais, Paris, and finally to a town near Montereau, where the authorities detained him. When the police canvassed his studio looking for clues, they found pictures he’d made of friends and acquaintances with their throats slashed, suggesting that Dadd’s murderous scheme had been premeditated.
Even this tragic note in Dadd’s life was, in some ways, in keeping with British society’s expectations in his day. “The idea that art and madness snuggled up right next to each other—that there was something subversive, dangerous, explosive about art—was very much part of the Victorian cultural milieu,” Demarest said. Dadd’s life took the stereotype to the extreme.
British authorities sent Dadd to London’s infamous Bethlem Royal Hospital (informally known as “Bedlam”—the origin of the colloquial term). In 1864, he moved to the newly opened Broadmoor Facility, where he remained institutionalized until his death in 1886. The staff of the facility became Dadd’s patrons and occasional subjects. Portrait of a Young Man (1853), for example, is thought to depict a hospital attendant. In the painting, a man in a dark suit sits on a bench made of tangled wood; the object seems a part of nature. Victorian mental institutions were notoriously horrific. Physicians’ understanding of schizophrenia and bipolar disorder (one of which Dadd probably had) was limited at the time, and restraints and opiates served as their major tactics for calming patients. The doctors’ support for Dadd’s painting—they even helped him get supplies—is a humane note in the history of Victorian mental health care. 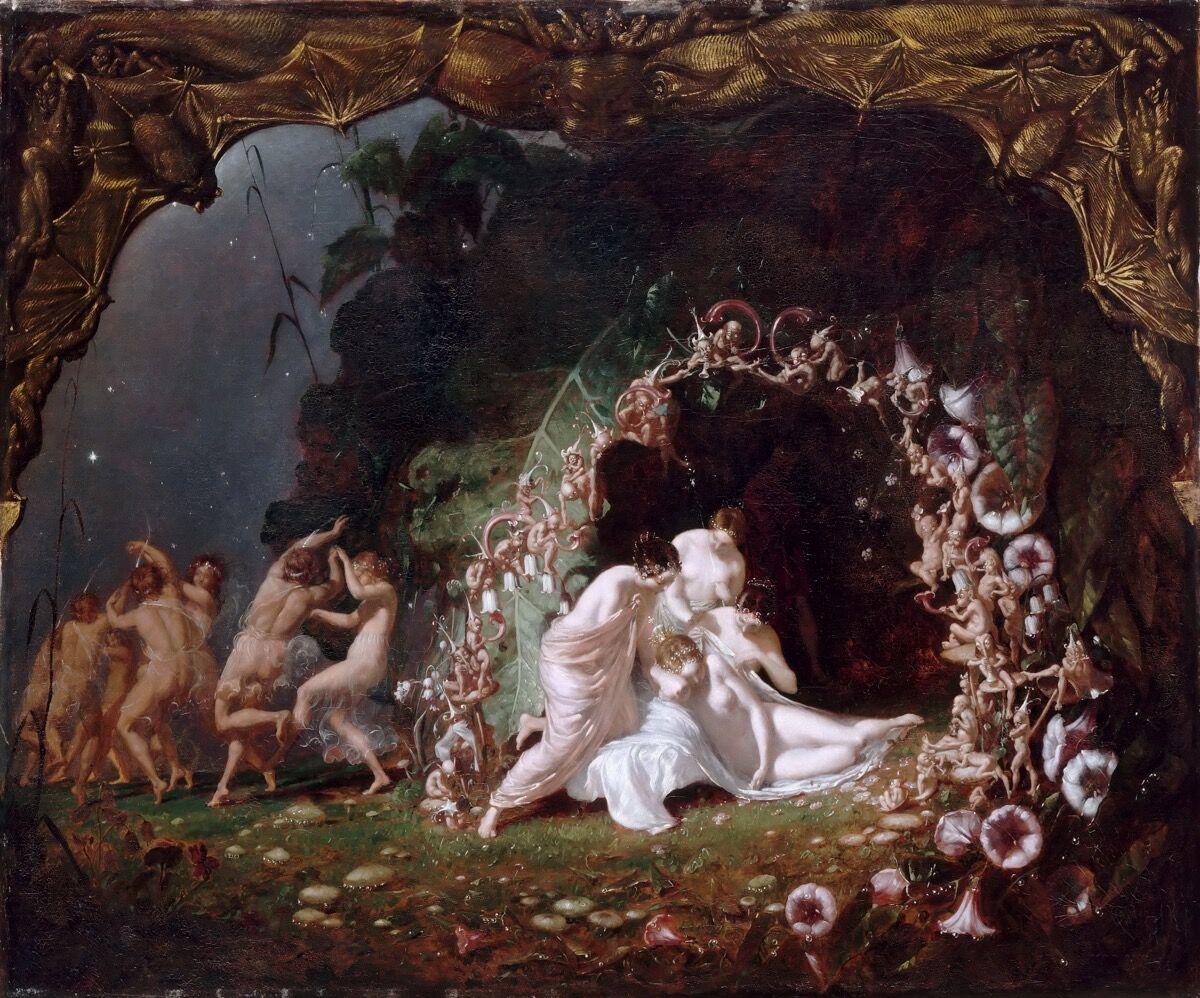 Fairies remained a predominant subject for Dadd throughout his life. The Fairy Feller’s Master-Stroke, which he worked on for nearly 10 years, became his magnum opus (and inspired a Queen song of the same name). His interest in the topic, notably, was not delusional, so much as it was part of a larger cultural intrigue. The British and Irish, as scholar Carole Silver writes in her 1986 book On the Origin of Fairies: Victorians, Romans, and Folk Beliefs, were trying to revive their folkloric traditions. Romantic poets like Percy Bysshe Shelley and Samuel Taylor Coleridge wrote about sprites in the early 19th century; their fantastical works fueled the Victorian imagination.
“Though the Romantic spirit hatched the fairies,” Silver writes, “it was the Victorian passion for investigation that nourished them.” Ideas about psychology and the unconscious were emerging, while the dawning Industrial Revolution encouraged the use of science and technology for new discoveries. Fairy mania eventually reached its peak in the early 20th century, when young girls convinced Sherlock Holmes writer Sir Arthur Conan Doyle that they’d managed to photograph fairies; in 1920, he included the pictures in a magazine article on the theme, and the story became a media sensation.
Dadd transformed a mad cultural obsession into transfixing artwork. “The artist’s illness is unquestionable and so, I think, is his peculiar genius,” Jonathan Jones wrote in a Guardian review of a 2015 exhibition of Dadd’s work. But he notes that in Dadd’s case, his mental illness may not have been connected to his art. “This is just one extraordinary case.…Dadd’s life was desolate. The art he made from it, in flight from it, is a joy.”
Alina Cohen
Related Stories