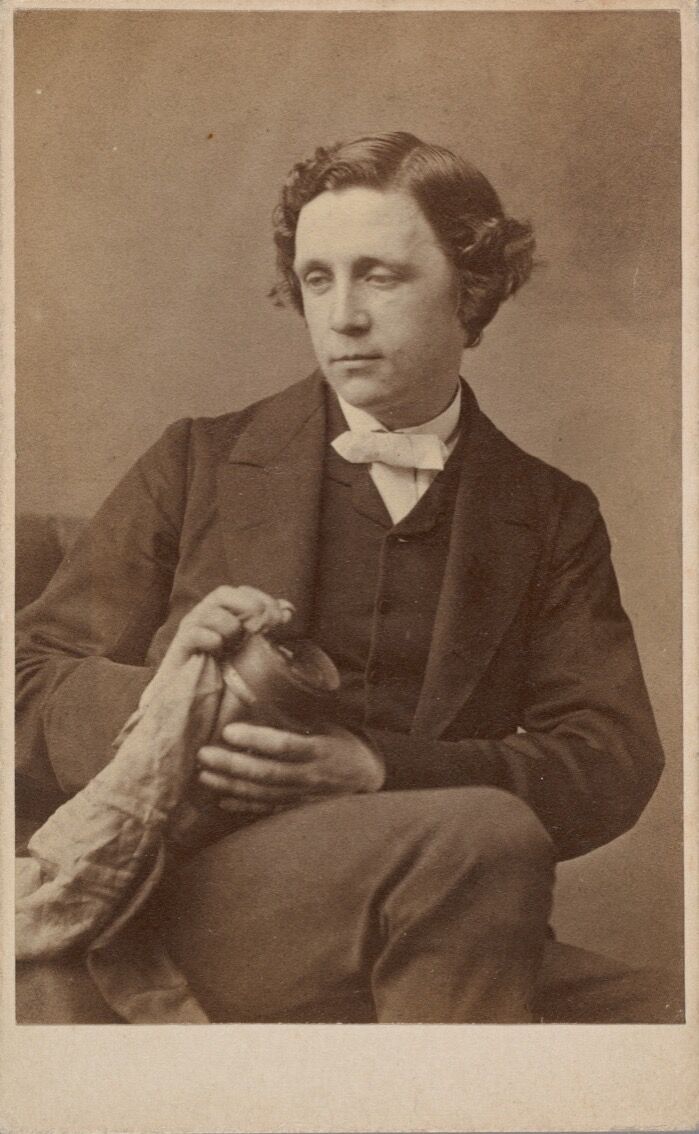 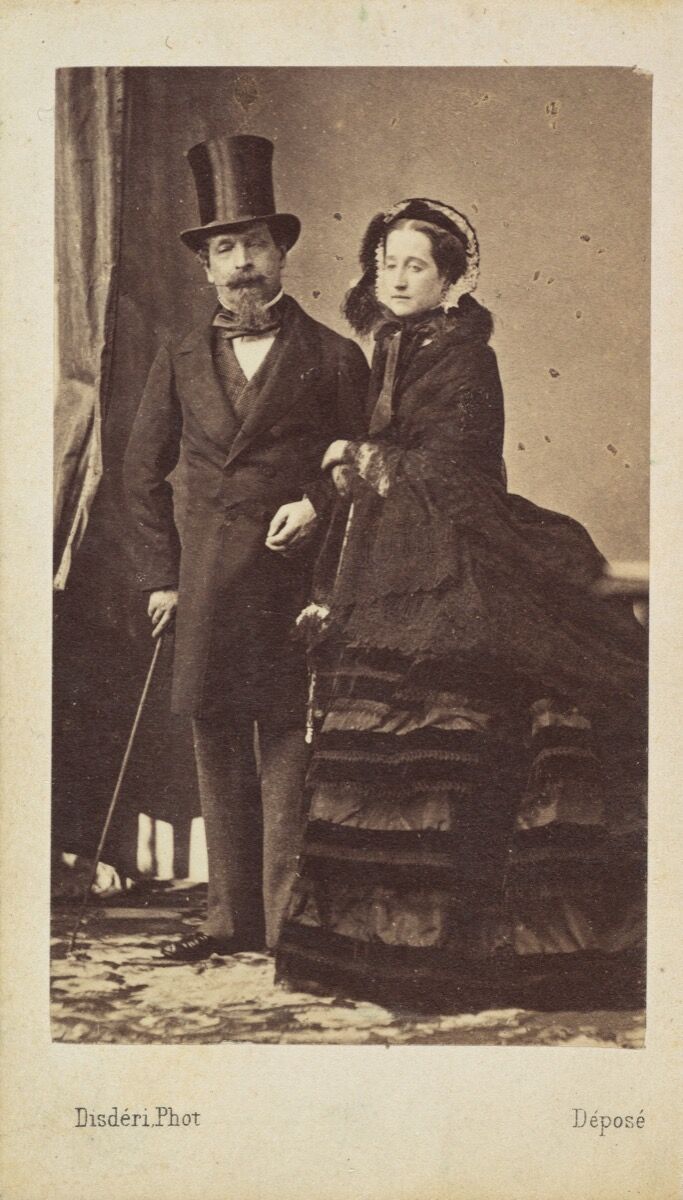 Napoleon III and Empress Eugenie, ca. 1865. Courtesy of The Metropolitan Museum of Art.

In our age of rabid social media use, the profile picture has become the de facto online avatar. Whether a formal headshot, carefully crafted selfie, or ironic meme, our profile picture represents a core aspect of our online identities. The idea behind the profile picture is much older than the advent of social media, however—it’s as old as the photographic medium itself.
In 1854, French photographer André-Adolphe-Eugène Disdéri patented the carte de visite, a slender 2 1/2-by-4-inch photographic print mounted on sturdy paper. Disdéri initially developed the carte de visite as a way of saving production costs—the small size of the photograph allowed him to take eight separate pictures for every single photographic plate. Conveniently, it was also approximately the size of a calling card, the wealthy Victorian socialite’s version of a business card, which they distributed to friends and acquaintances during house calls. With the increased capacities of printing technology, visiting cards of the time typically featured ornate designs and bright colors. With the ability to add one’s portrait to the card, the carte de visite represented a natural next step in pictorial communication. 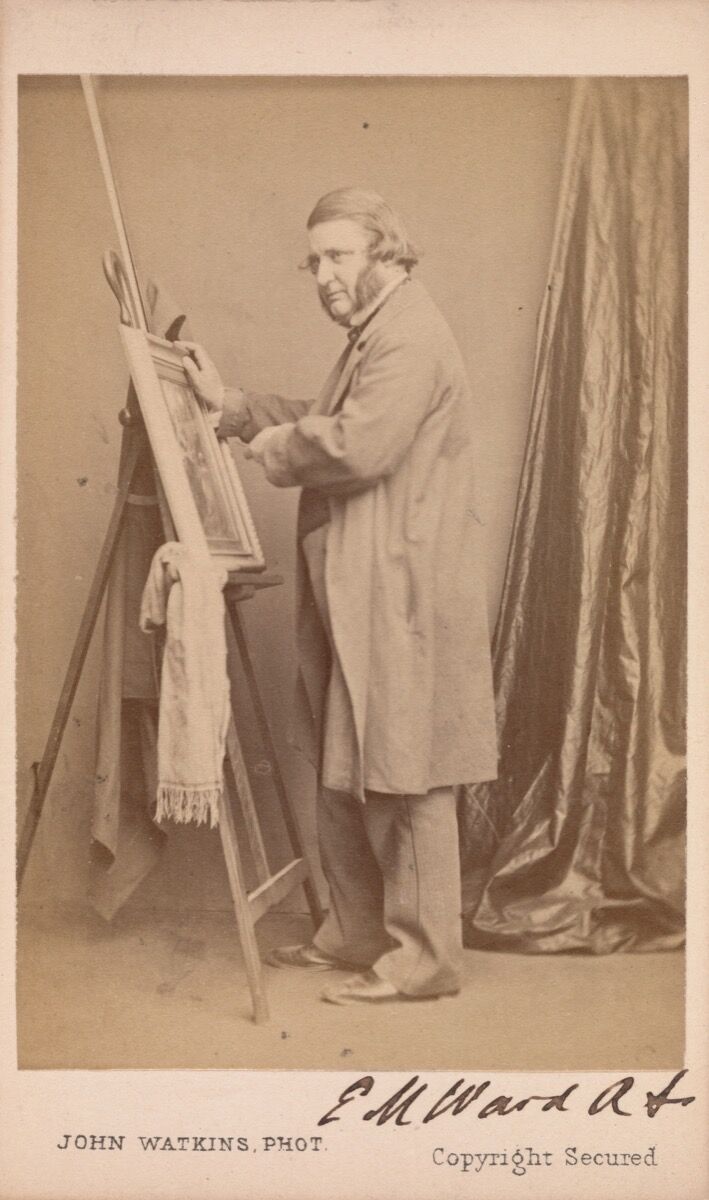 E.M. Ward, 1960s. Courtesy of the Metropolitan Museum of Art. 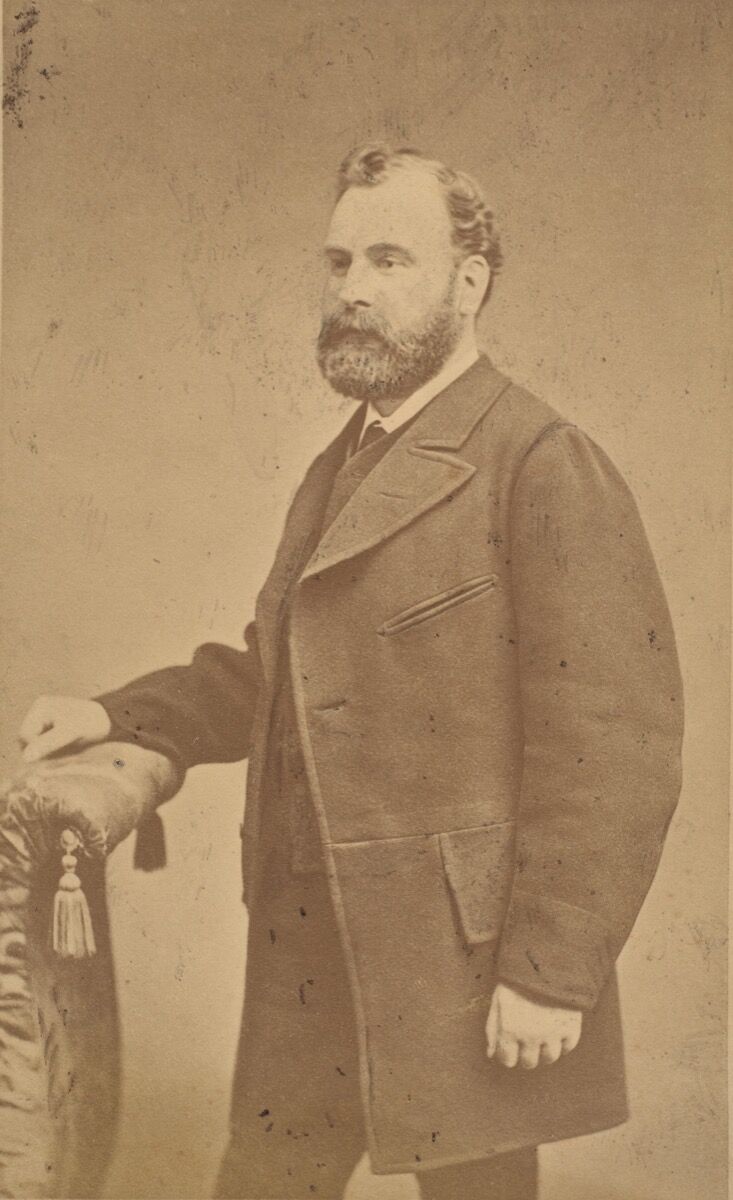 Eduoard Manet, 1890s. Courtesy of the Metropolitan Museum of Art.

Still, the photographic form didn’t really catch on for another five years, when Disdéri hit the 19th-century publicity jackpot, publishing a carte de visite of Emperor Napoleon III. Thus began the “cartomania” of the 1860s—a decade during which the pictorial calling card reigned supreme. Regular folks collected the visages of famous folks, placing them in photo albums alongside images of their friends and family members. In fact, the first photographs of British royalty to be disseminated widely were cartes de visite, helping individual monarchs develop particular celebrity personas. Popular cartes de visite of Queen Victoria showed her dressed quite humbly, while a similarly beloved image of Queen Alexandra when she was Princess of Wales was used to communicate her health and vitality after she endured rheumatic fever while pregnant. 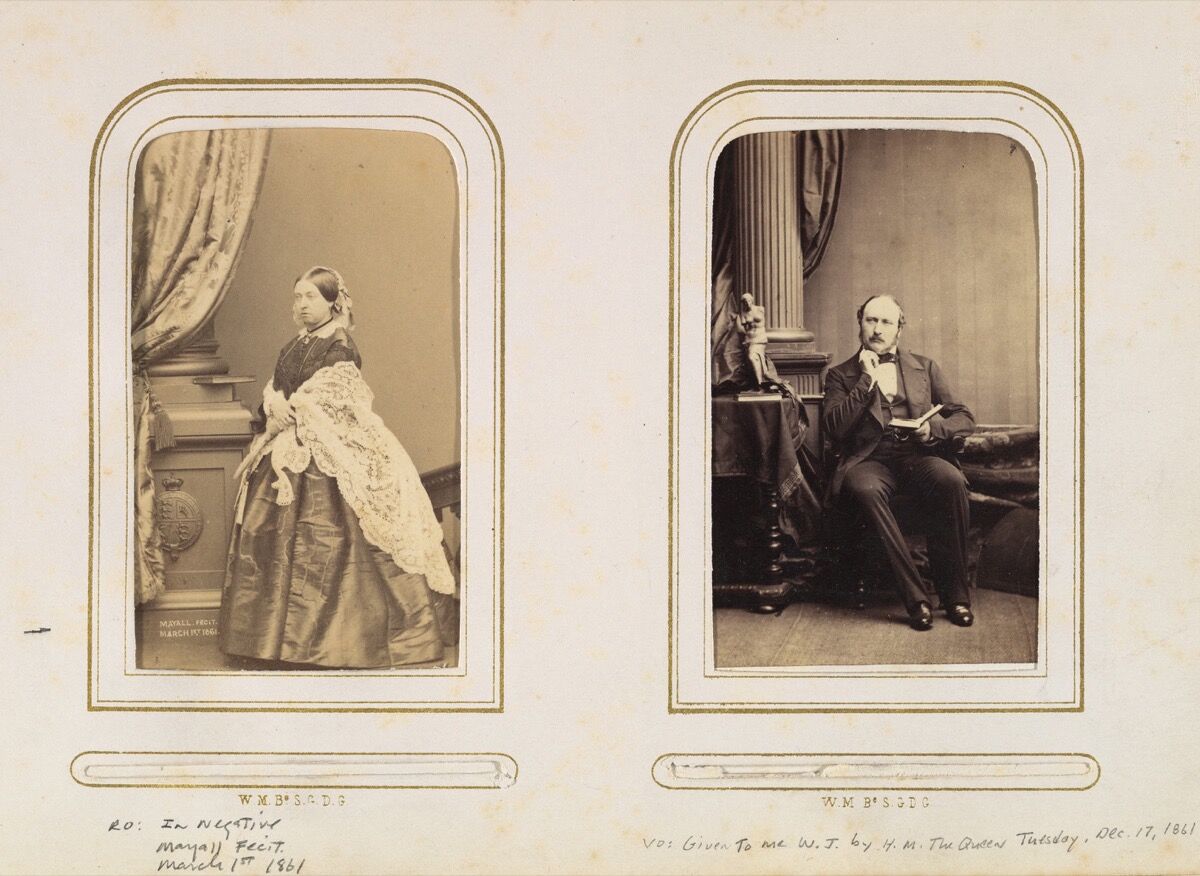 Advertisement
Because of the modest size and low cost of the carte de visite, this new art form signaled the democratization of photography. Sitting for one’s portrait was no longer a sole luxury of the upper crust. In the United States, the popularity of the carte de visite coincided with the Civil War, and many soldiers left their loved ones with one as a token of remembrance. As Andrea L. Volpe writes in the New York Times, for black soldiers in particular it was a powerful “claim to recognition” in a society that had rendered them invisible. Volpe also describes the way images of soldiers and freed black slaves were used to rally support for the Union, and establish a nascent form of national identity during this time of severe social and political fissures.
More broadly, the carte de visite was a means of communicating social importance and forming relationships. Just as we follow friends on Instagram today to connect with others, so too did cartes de viste establish and solidify social bonds. The importance of cartes de viste led American physician and poet Oliver Wendell Holmes, Sr. to deem them the “sentimental ‘green-backs’ of civilization” in The Atlantic Monthly in 1863, due to their omnipresence and unique emotional appeal. Holmes noted wryly: “Jonathan does not think a great deal of the Venus of Milo, but falls into raptures over a card-portrait of his Jerusha.” 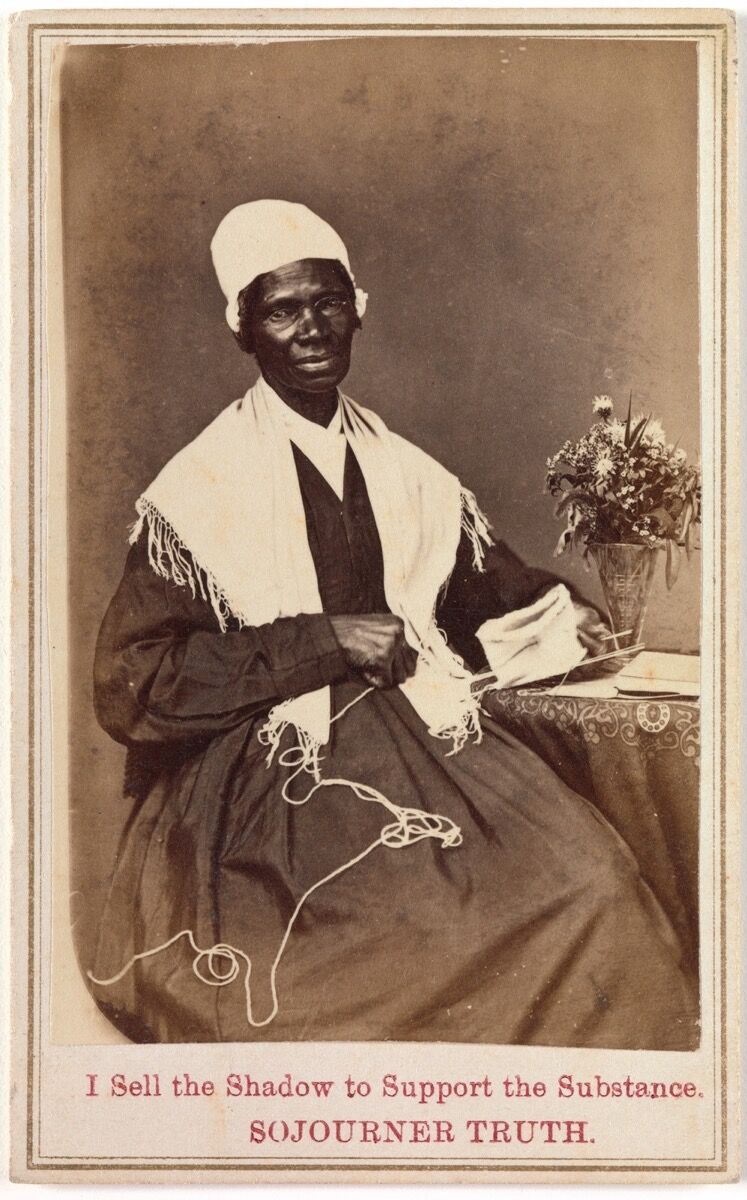 Similarly, author Charles Dickens commented on the ubiquity of the carte de visite at the time, calling its supremacy an “accomplished fact.” Like Holmes, Dickens’s review of the new art form was hardly glowing. He humorously described the darker side of photography’s democratization, noting that seeing one’s own carte de visite could be a decidedly humbling affair. In an 1862 periodical, Dickens wrote: “We do not all come out of the photographic studio alike unhappy. There are those to whom the process does justice, as well as those to whom it does injustice…” And so began the eternal crisis of photogenicity.
Like many cultural phenomena, cartomania was a temporary craze. The early 1870s saw the emergence of the larger, sturdier “cabinet card,” which served a similar, if oversized, role. The cabinet card would hold dominion over Victorian parlors until Kodak brought home photography to the masses in the early 20th century. 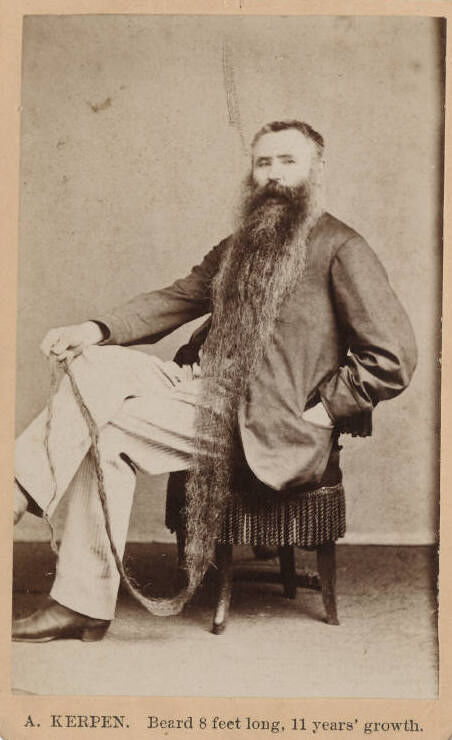 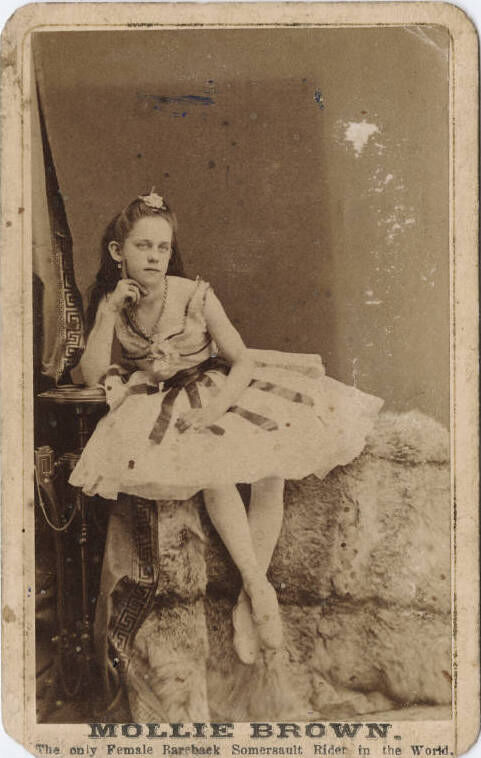 Still, throughout the second half of the 19th century, both the carte de visite and the cabinet card were essential to photography’s development. While most of the images were simple depictions of individuals and couples posing in a photography studio, some photographers got wildly creative. In his book A Concise History of Photography (1965), Helmut Gernsheim noted that each decade brought new visual trends to the cards. In the 1860s, it was common for the portrait subject to pose in front of a column and curtain, while 1870s imagery was all about rustic bridges. Images in the 1880s prominently featured hammocks, swings, and railway carriages; the following decade brought palm trees and cockatoos. In the first decade of the 20th-century, wealthier folks chose to pose for their cartes de visite while seated in their new motor cars.
Regardless of the trappings of any one carte de visite, cartomania reveals something universal in the human need to share our own image with others. Such an impulse is hardly an invention of the so-called narcissistic era of social media. Just as today’s profile picture is used to communicate identity through a single image, so too did the carte de visite announce one’s presence to the world.
Amanda Scherker
Related Stories

The Staying Power of the Smiley Face