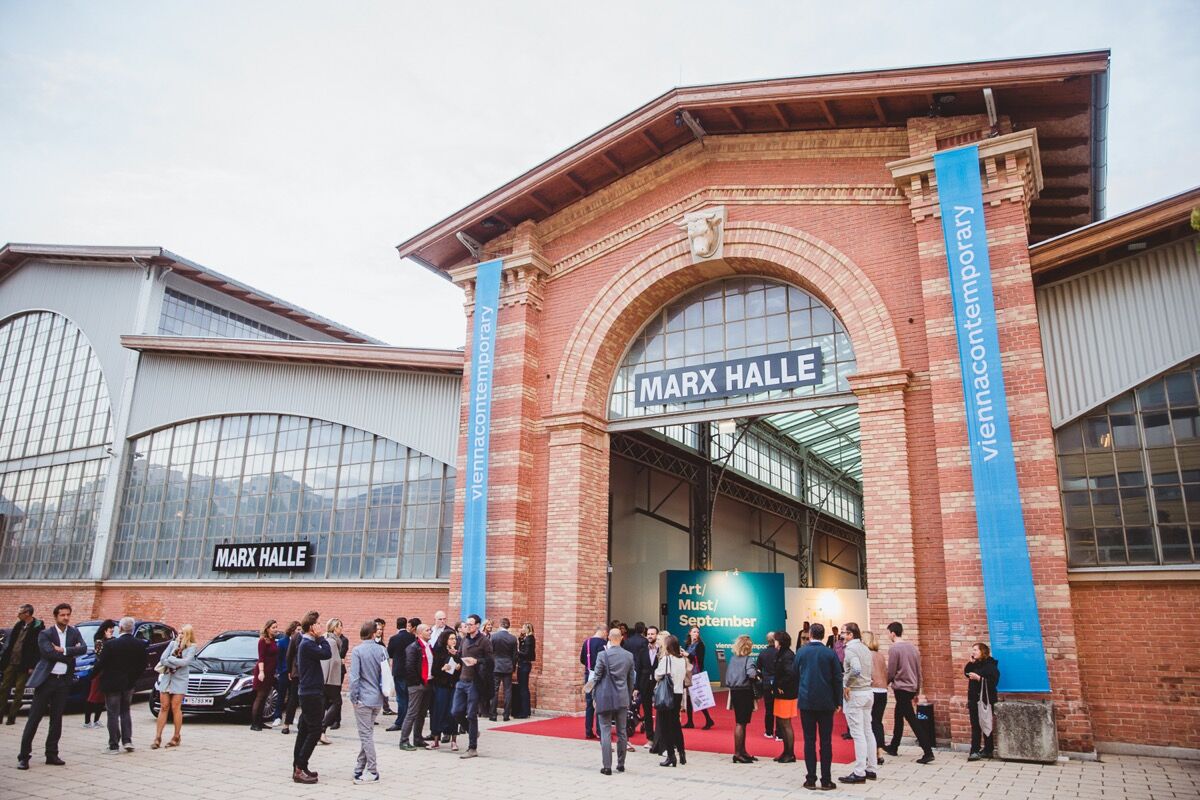 Viennacontemporary 2016. Photo by A. Murashkin, courtesy of the fair.

It used to be that Vienna was the global capital of contemporary culture. The leading artists, architects, and thinkers of the Western world worked in the epicenter of the Austro-Hungarian Empire, building a modernist culture at the turn of the last century on the shoulders of one of the richest museological traditions in Europe and some of the best educational establishments, for the arts and otherwise, on the continent. Names like Sigmund Freud,
Egon Schiele
, and
Adolf Loos
continue to be the city’s best-known cultural calling cards. Yet their heyday was a century ago—more, even.
Since then, it would appear that Vienna’s time as a capital of contemporary culture has come and gone. Today, at first glance, Vienna strikes the visitor as a city of historical, encyclopedic museums and storied institutions whose fin de siècle patina dictates exhibitions and cultural life writ large in the city.
And yet, a closer look reveals that the Austrian capital is also home to a resurgent, growing contemporary art scene, one that is capitalizing on the city’s expansive arts infrastructure and a cultivated collector base to support young artists and emerging galleries, and to make contemporary culture central to Viennese civic life. With the rise to prominence of viennacontemporary, the city’s leading international art fair (its latest edition opened yesterday and runs through the weekend), local dealers and artists are poised to reassert and redefine Vienna’s position in the global cosmology of contemporary art epicenters. 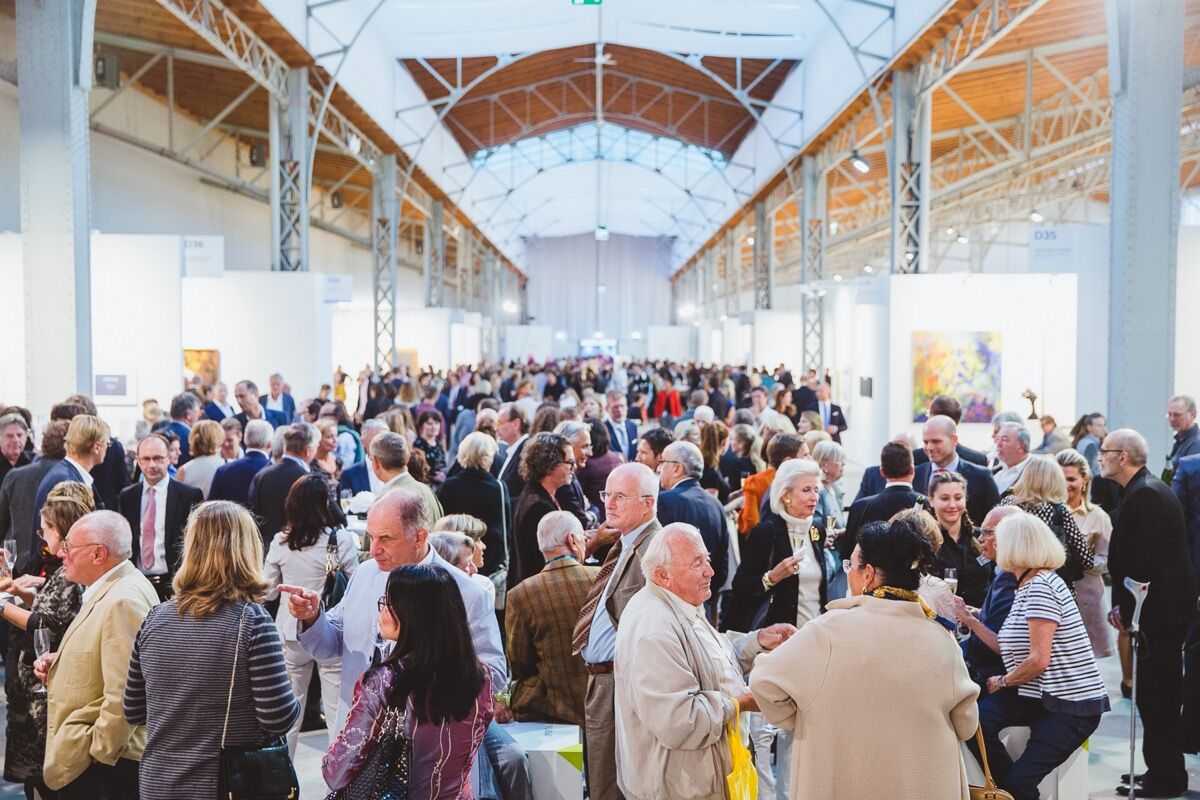 Viennacontemporary 2016. Photo by A. Murashkin, courtesy of the fair.

Given this context, the viennacontemporary vernissage was a telling scene: Hordes of collectors roamed the aisles (with Postmasters Gallery being the only New York gallery in sight), speaking and buying in a mixture of Central and Eastern European tongues. viennacontemporary is a hub for Austrian galleries, both established and new, but it also hosts the most comprehensive contingent of galleries from across the post-communist sphere of any international fair. German, Russian, and Serbo-Croatian could be heard in the booths, and the wares on offer reflected this diversity; major Viennese and Berlin galleries brought the likes of
Ian Burns
and
Hiroshi Sugimoto
, but dealers from Hungary, Poland, Croatia, and Russia were also showing established local talents, like Moscow-based painter
Pavel Pepperstein
.
This geographical focus is also a nod to Vienna’s Austro-Hungarian heritage. In the pre-World War I era, cultural elites from these and other territories of the empire’s far-flung peripheries flocked to its center to study art and develop their respective national traditions of visual culture in the manner of European modernity. And by asserting its hometown’s distinctly Central European heritage, viennacontemporary is becoming an annual event of pointed significance in a globalized art world that increasingly overlooks New York, London, Paris, and even Berlin in the search for exceptional new art.
Christina Steinbrecher-Pfandt, artistic director of viennacontemporary, numbers among the city’s most enthusiastic cultural ambassadors. A leading figure in the expansion of the local contemporary art scene, the Kazakh-born and Russian-bred impresario studied in London and worked in Moscow before relocating to Vienna in 2012 to join the fair as co-artistic director with Vita Zaman (who departed in 2014). At the time, the event was known as Viennafair, and though its core local identity and Eastern European geographical focus had been set since the first edition was held in 2005, the fair’s date was not—a blow to its standing among elite international collectors. “We saw that something structurally had to change,” she reflects. 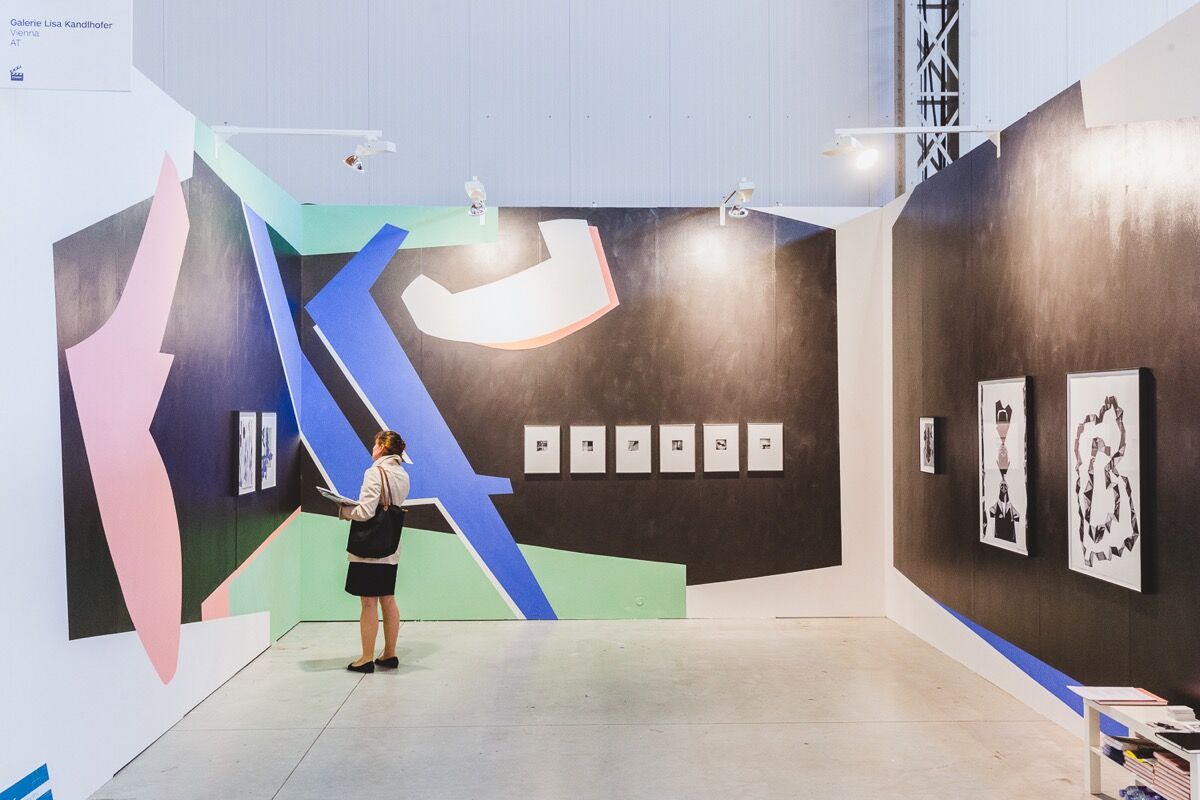 Installation view of Galerie Lisa Kandlhofer’s booth at viennacontemporary, 2016. Photo by A. Murashkin, courtesy of the fair.

Advertisement
In 2014, Steinbrecher-Pfandt began by cutting the number of participating galleries by some 30 exhibitors, the intent being to refine the overall quality of work for sale. And whereas Viennafair had taken place each spring without an annually standardized weekend, she aimed to set a fixed date. Yet Reed Exhibitions, the fair’s then-owner, could not accommodate what she saw as an eminently important goal because of scheduling commitments to its other fairs. Thus, Steinbrecher-Pfandt made the decision to separate from Reed and instead furthered her partnership with Russian entrepreneur Dmitry Aksenov.
The fair was rebranded as viennacontemporary. Steinbrecher-Pfandt brought many of Viennafair’s defining features—the bulk of its creative team, its eastward focus, its support from Austrian galleries, and its high standing among local institutions—with her to the new venture. Under its new title and stewardship, in 2015 viennacontemporary’s inaugural edition was held during the third week of September at the sprawling industrial-style event space Marx Halle, and garnered rave reviews from visitors and participating galleries alike.
For Steinbrecher-Pfandt, the support of local dealers was central to improving the fair’s quality and international standing. “This is their scene,” she explains, “and they want to protect it. They want it to work.” In a testament to the conviction Steinbrecher-Pfandt inspires, many of Viennafair’s participating galleries—and, importantly, nearly all of its longstanding exhibitors based in the Austrian capital—migrated to viennacontemporary with her.
The new name, she is quick to point out, makes explicit the fair’s ambition to assert that exceptional contemporary art is exhibited, sold, and made in Vienna. The city’s identity is rooted in a commitment to cultural excellence, she continues, and this tradition invariably informs the current scene. “Vienna was built more than 150 years ago,” Steinbrecher-Pfandt explains as she surveys the bustle inside the Marx Halle, “and since then, the city has just been improving and improving that infrastructure. You encounter excellence everywhere: excellent buildings, excellent concerts, excellent art.” 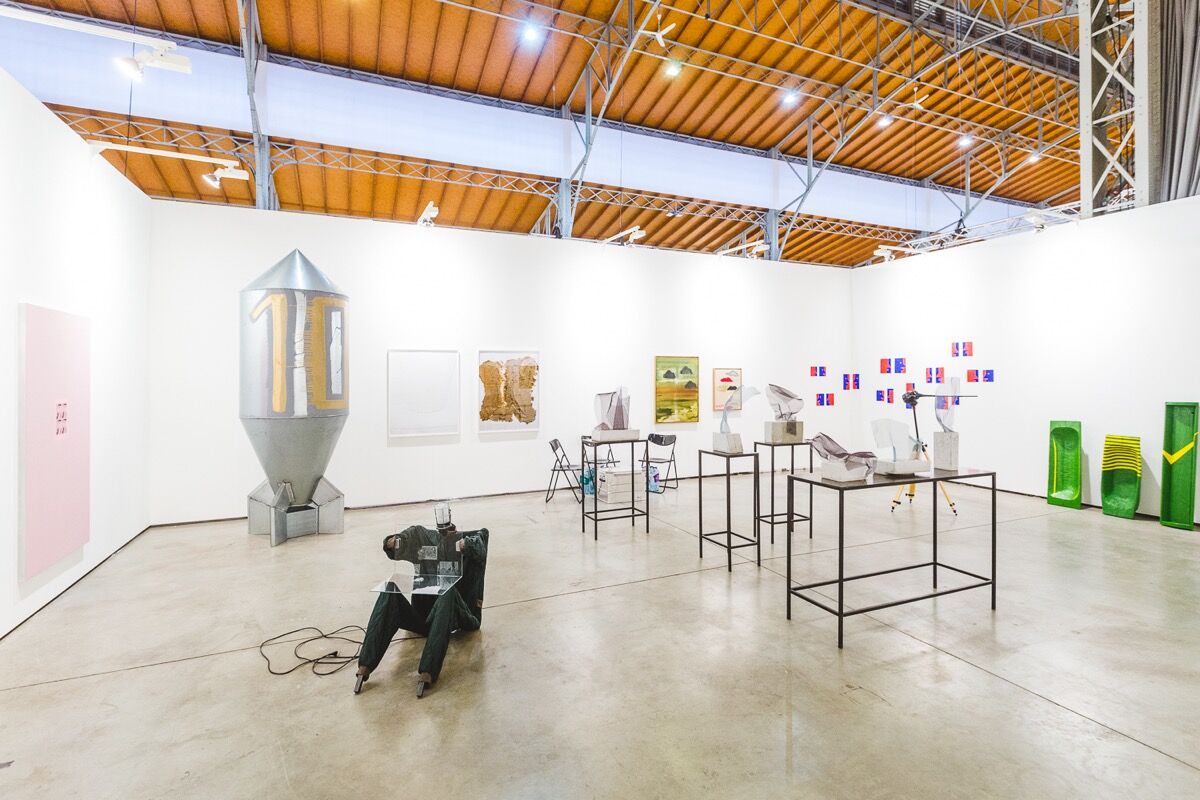 Installation view of Croy Nielsen and Galerie Emanuel Layr’s booth at viennacontemporary, 2016. Photo by A. Murashkin, courtesy of the fair.

Foreign art dealers are increasingly inclined to agree. Several German galleries have opened successful outposts in Vienna in recent years—prominent names like Beck & Eggeling of Düsseldorf and Berlin-based Galerie CRONE among them. Each of these spaces have long been fixtures at viennacontemporary. In an even more decisive show of confidence in the local art scene and market, Croy Nielsen, the young gallery previously based in Berlin, is completely relocating its operation to Vienna. “We really feel that Vienna has potential,” said co-founder Henrikke Nielsen at the viennacontemporary vernissage, where she and partner Oliver Croy are splitting a booth with their close friend Emanuel Layr, a cornerstone of the Viennese gallery scene. “We especially feel that there is the capacity here for a gallery of our generation—a gallery working with younger artists.” She cited the city’s well-funded museums and contemporary art exhibition spaces like Museum Moderner Kunst and TBA21; the high quality of work by graduates from the two local art academies, Angewandte Kunst (the University of Applied Arts) and Akademie der bildenden Kunst (the Academy of Fine Arts); and the existence of rich patronage and artmaking traditions as but a few of Vienna’s compelling qualities.
At the fair preview, Croy Nielsen’s new life in Vienna was off to an optimistic start. The nearby Belvedere Palace—the very same institution that has
Gustav Klimt
’s definitively secessionist, much-beloved 1907-1908 painting The Kiss on permanent display—bought a concrete-and-mesh sculpture by
Andy Boot
. The gallery will open for business on October 28 with a solo show by
Nina Beier
(who they have been working with at the Berlin space since 2008). It’s located within a piano nobile apartment in the city’s historic center, outfitted with original Jugendstil-era interior details that Nielsen describes with the palpable awe of an “outsider.” She uses the word several more times in describing her relationship to Vienna, in part to contrast with the experience of her Austrian-born co-founder, who spent his university years in the city more than two decades ago. “It was completely gray and dusty then,” Oliver Croy reflects. “It feels surprisingly good to be back.” He rattles off a list of experimental project spaces that includes Well Well Well, Jupiter Woods, and the just-opened Autocorrect as testament to the newfound diversity and liveliness of local contemporary art spaces. 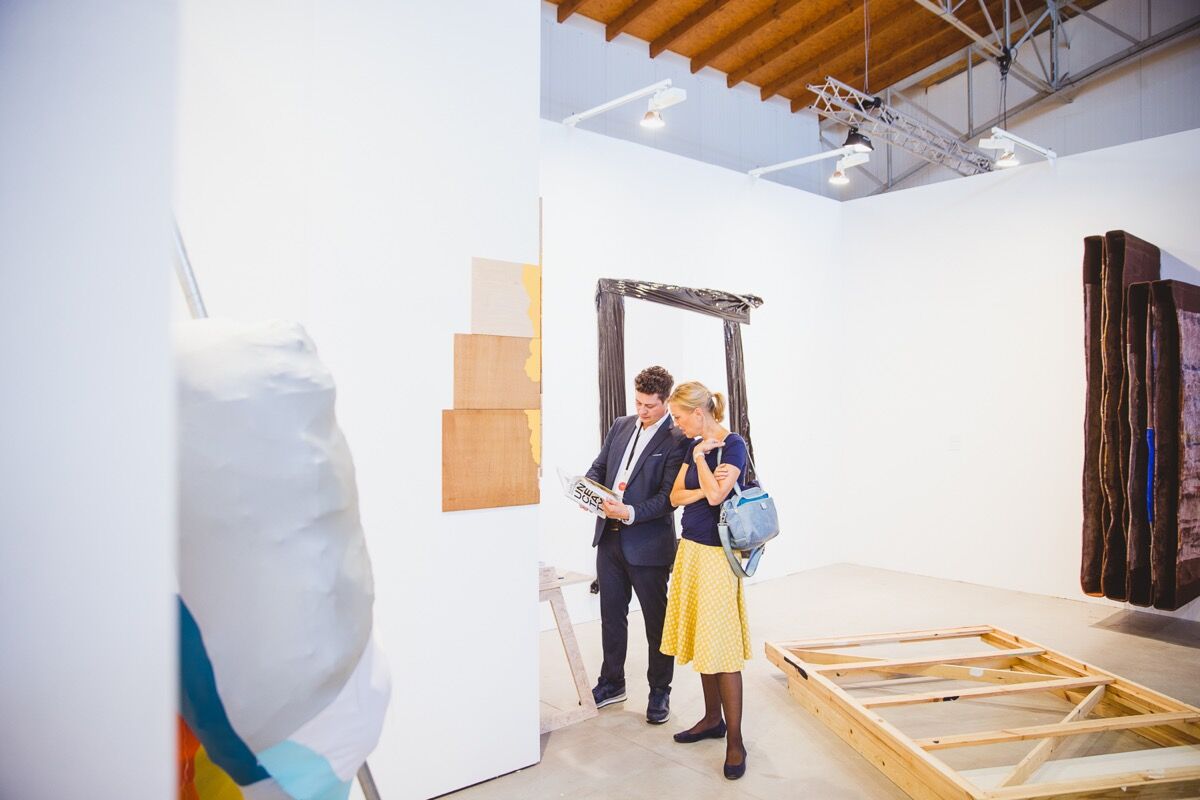 Installation view of FOLD’s booth at viennacontemporary, 2016. Photo by A. Murashkin, courtesy of the fair.

The Viennese scene—and viennacontemporary—is just as distinct for its ties to East-Central European artists and collectors. The regional commitment has been part of the fair’s identity since Viennafair first launched 11 years ago with the support of Erste Bank, a major financial backer of that earlier iteration and now of viennacontemporary, whose foundation holds an authoritative collection of conceptual art from Southeast Central Europe. Boris Marte, the former managing director of that philanthropic arm, explained at a celebratory dinner on Wednesday night that one of the fair’s original goals had been to centralize and promote the market for exceptional regional artists, many of whom had worked in poverty and obscurity during the state socialism years. Based on the turnout thus far for the 2016 edition—which includes an acquisitions committee from the Tate Modern—this ambition has been met with success.
“The [geographic focus] is the unique quality of the fair, and it brings a lot of people here,” Steinbrecher-Pfandt observed earlier in the day. Her words were corroborated at the booth of Vienna-based Gabriele Senn Galerie, where there was a textual sculpture by Austrian-born, Croatia-bred, Vienna-based artist
Marko Lulić
. The piece is a part of his recurring project to address the legacy of modernist monuments in Eastern Europe by fashioning them in miniature. (The work had yet to sell at the close of Wednesday’s vernissage, but a gallery representative described substantial interest in the piece.) 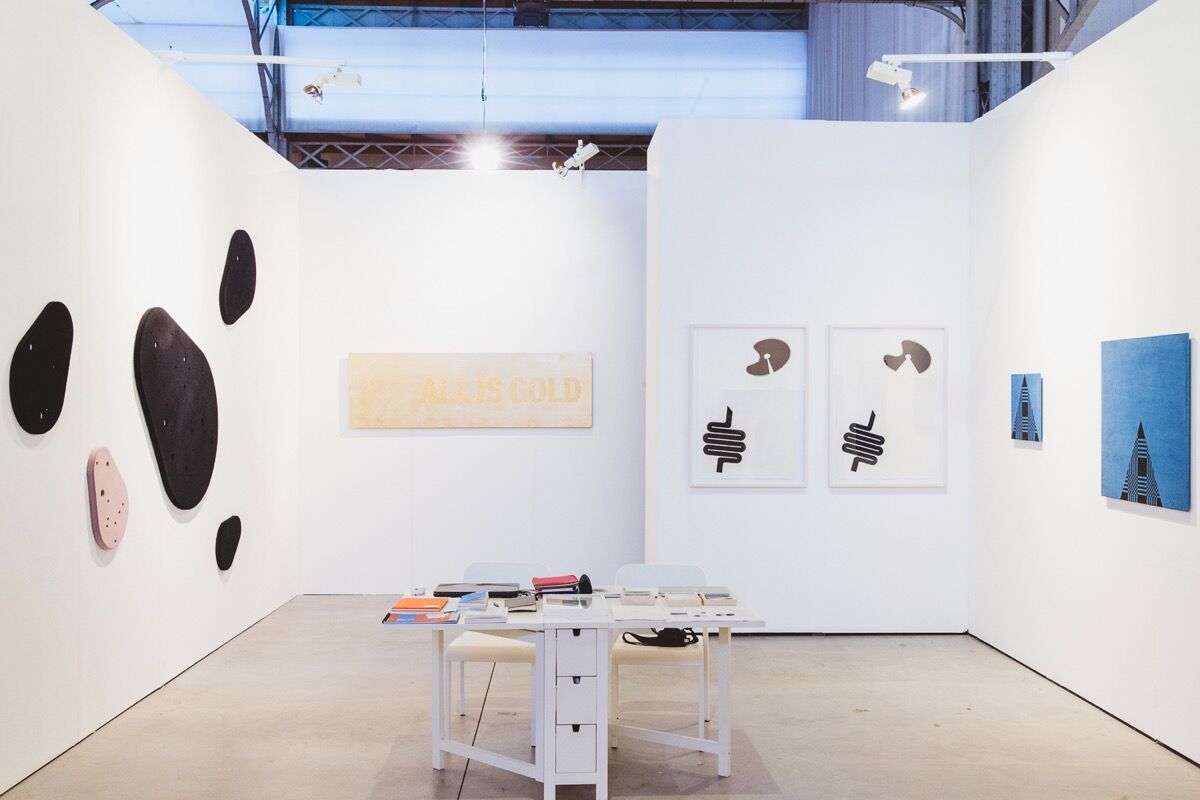 Installation view of Ani Molnár Gallery’s booth at viennacontemporary, 2016. Photo by A. Murashkin, courtesy of the fair.

At the nearby booth of Budapest’s Ani Molnár Gallery—one of the city’s leading spaces—a gold-clad panel by Hungarian
Emese Benczúr
had already been sold, and several collectors examined and discussed minimalist, geometric paintings by Russian
Ekaterina Shapiro-Obermair
. In between tending to the booth’s overflow of visitors, founder Ani Molnár explained that Viennafair had been her first international art fair and that positive experiences in the city led her to participate in other European fairs. This is her sixth consecutive year showing in Vienna, and Molnár noted that the high quality of exhibited work along with the especially impressive sales at last year’s inaugural edition of viennacontemporary gave her even higher hopes for 2016.
It seemed that Molnár had yet more praise for the fair, for the Viennese contemporary art scene, and for the city’s catalyzing role in contemporary art across the region. But before she could continue, she stopped short as a collector approached to inquire about a work. And, like so many of the dealers around her, Molnár went off to play her part in the resurgence of contemporary art in one of Europe’s most historically significant cultural capitals.
Anna Kats
Related Stories