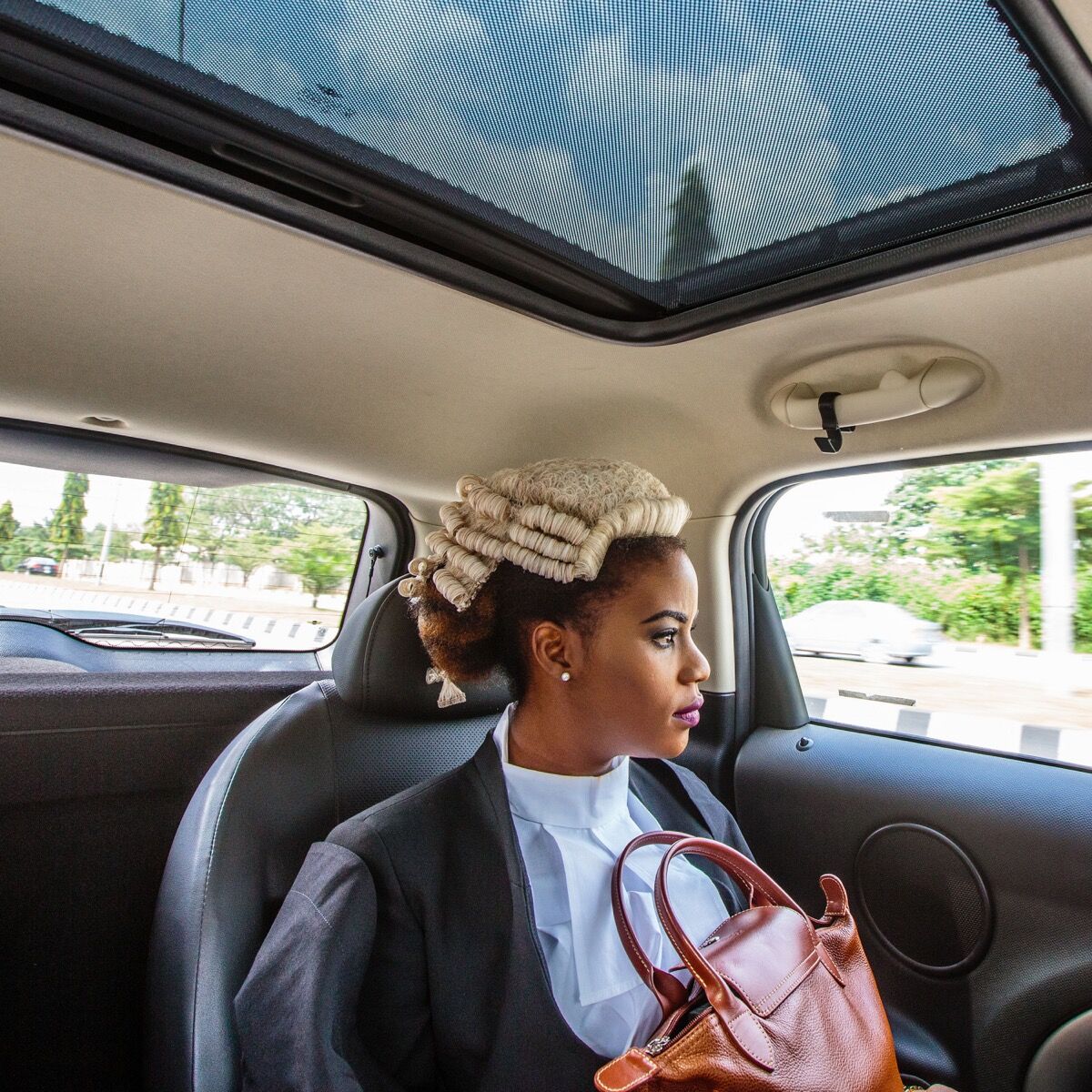 Ginika is on her way to join thousands of Nigerian law graduates being called to the bar in Abuja, Nigeria. Photo by @tomsaater. 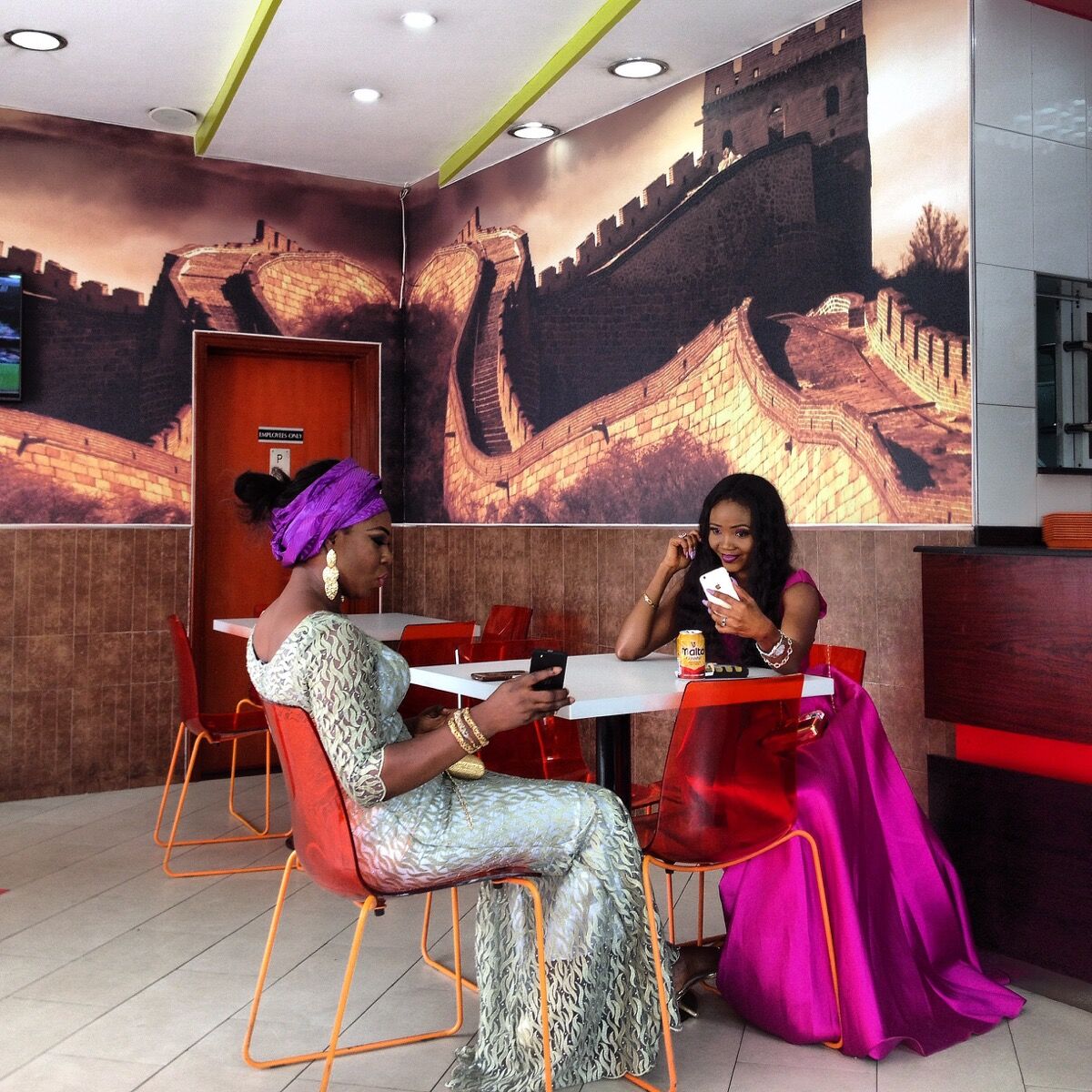 Too often, the African continent has been captured by the West in a series of clichéd images: women carrying jugs of water atop their head; children either starving or wielding AK-47s; elephants and lions silhouetted against a savanna sunset. But that narrow focus is expanding.
This overdue perspective is thanks in part to Everyday Africa, an Instagram account-cum-global movement that’s shifting photojournalism toward collective, localized storytelling—and now a new book: Everyday Africa: 30 Photographers Re-Picturing a Continent.
In 2012, its founders, photographer Peter DiCampo and writer Austin Merrill, set out on an assignment to document the aftermath of a decade of crisis in Ivory Coast. Both had intimate knowledge of West Africa; Merrill as a former foreign correspondent for the Associated Press, Dicampo as a freelance photojournalist. Both men cut their teeth on the continent in the Peace Corps.
On this trip, rather than photographing refugees and victims of the civil war—images that would likely have contributed to the simplistic narrative of Africa as a land of extremes—they reached for their iPhones, recording passed-over images of daily life. During a turning point in Ivory Coast, the two had pondered, “What does reporting look like if we just start photographing everything?”
“With issue-based storytelling,” DiCampo says, “you decide in advance what images or what words you need from a situation; it’s almost like you’ve decided on a thesis and then you have to go and prove it.” For Africa, with its 54 countries and as many as 2,000 languages, that often means zeroing in on poverty, war, disease, or wild animals—objectifying the exotic, as if donning blinders to all that doesn’t fit inside this narrative. 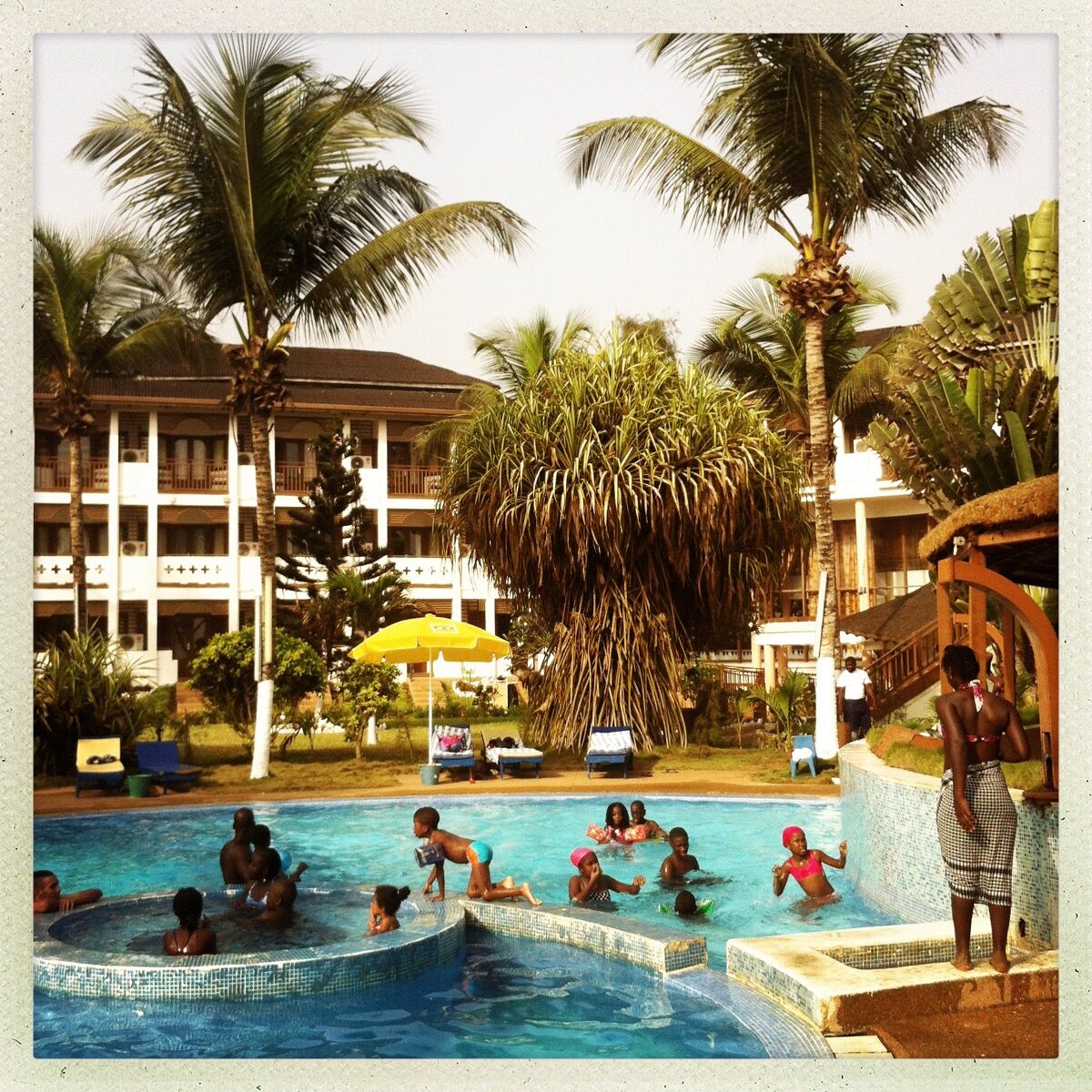 Poolside scene at a hotel in Grand-Bassam, a popular beach community outside of Abidjan, Ivory Coast. Photo by @pdicampo. 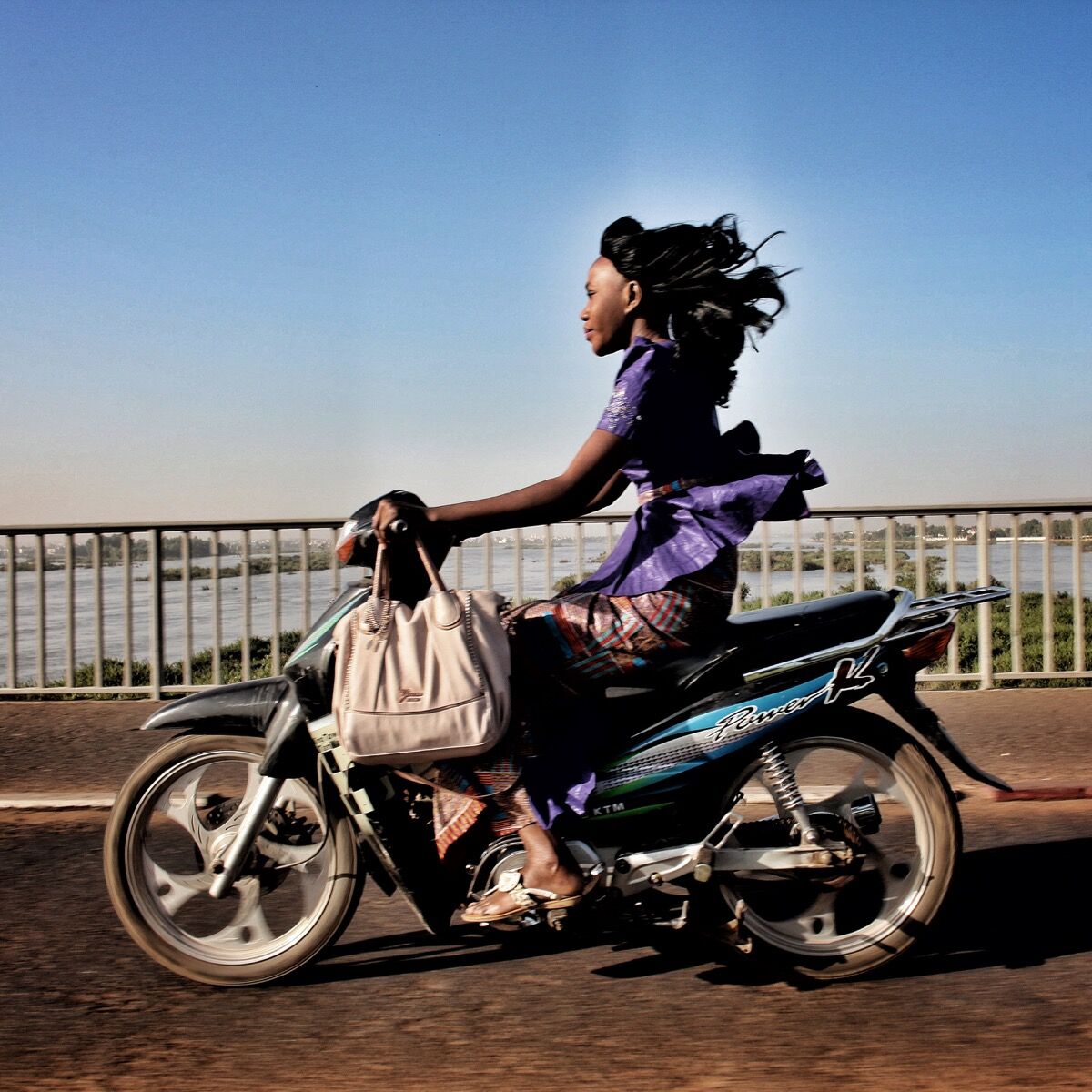 Riding over the Niger River in Bamako, Mali. Photo by @janehahn.

“It’s not that those things in and of themselves are inaccurate,” says Merrill of well-worn clichés, from scarified faces to cultural safaris, that date back to colonialism. “The inaccuracy comes with the incompleteness of the stories being told. There are elephants in Africa; there are child soldiers. It’s the things that you don’t see that means people aren’t getting a complete image of a place.”
While following a convoy of refugees, DiCampo recalls photographing a child hanging from her mother’s arm, looking off into the distance, with his professional gear. “It was a very sad ‘Africa refugee’ kind of photo, [suggesting] an uncertain future,” he says. A few minutes later, he switched to his iPhone, this time focusing on a group of refugees rifling through DVDs at a roadside stand. “They were such different takes on the same situation,” he explains. “In one of them I’m drawing back on this knowledge of Western photographers photographing Africa, pulling from that visual library, and in the other I’m casually photographing what’s happening.”
It’s in that casual inclusiveness that Everyday Africa finds its voice. The Instagram feed, at 3,762 posts and counting, is catalyzing a new form of journalism that thrives not on the decisive moment but rather on a reality told in small pieces, from multiple perspectives. In doing so, it’s engaging a new generation of African photographers with newfound access to amplify their voices via social media, the internet, and mobile phones. And it’s giving them a platform—an audience nearly 330,000 followers strong, of Westerners and Africans and people of African descent alike—through which to define their own narrative. 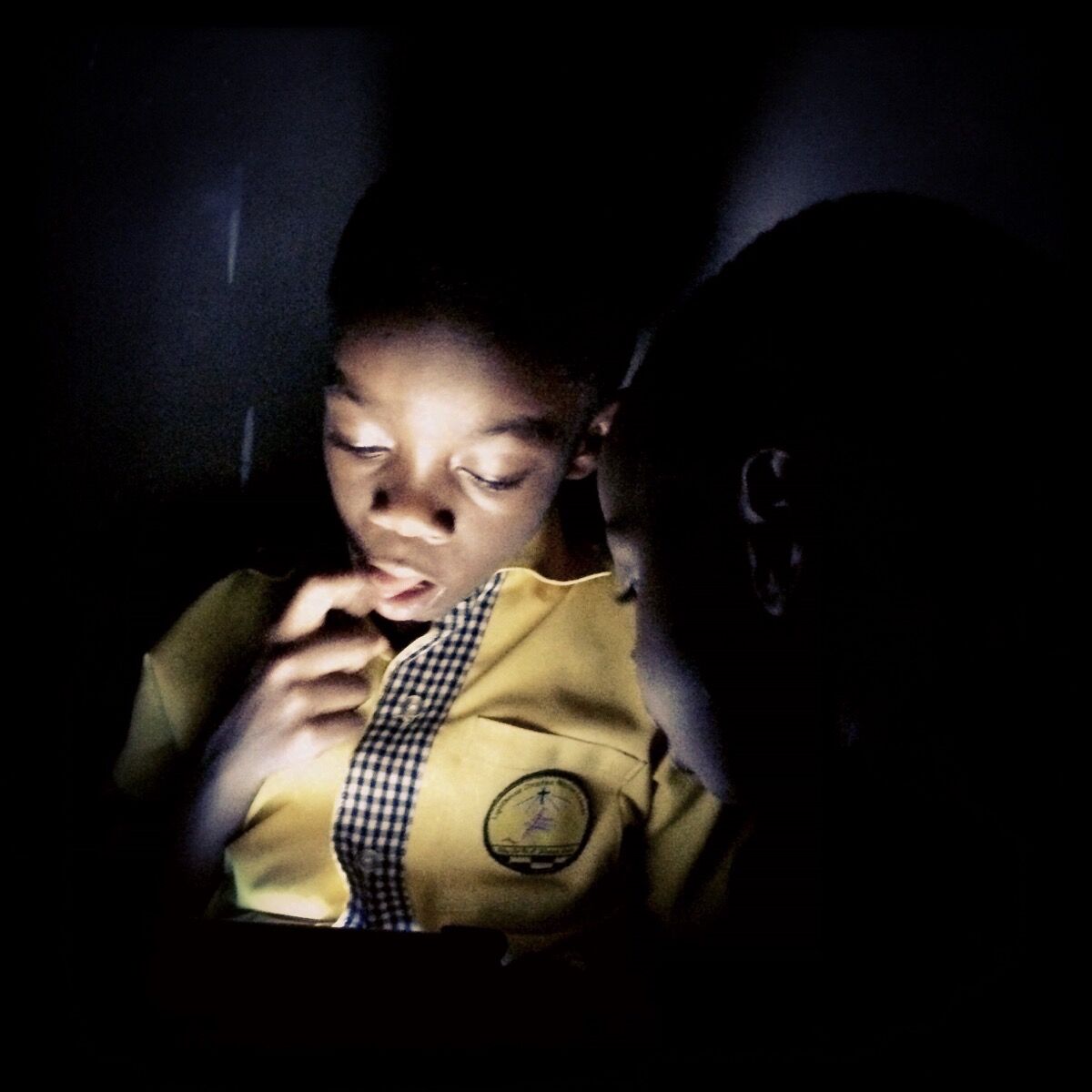 Paakow tries to answer a difficult question on the iPad while his younger brother Ato looks on. Accra, Ghana. Photo by @africashowboy. 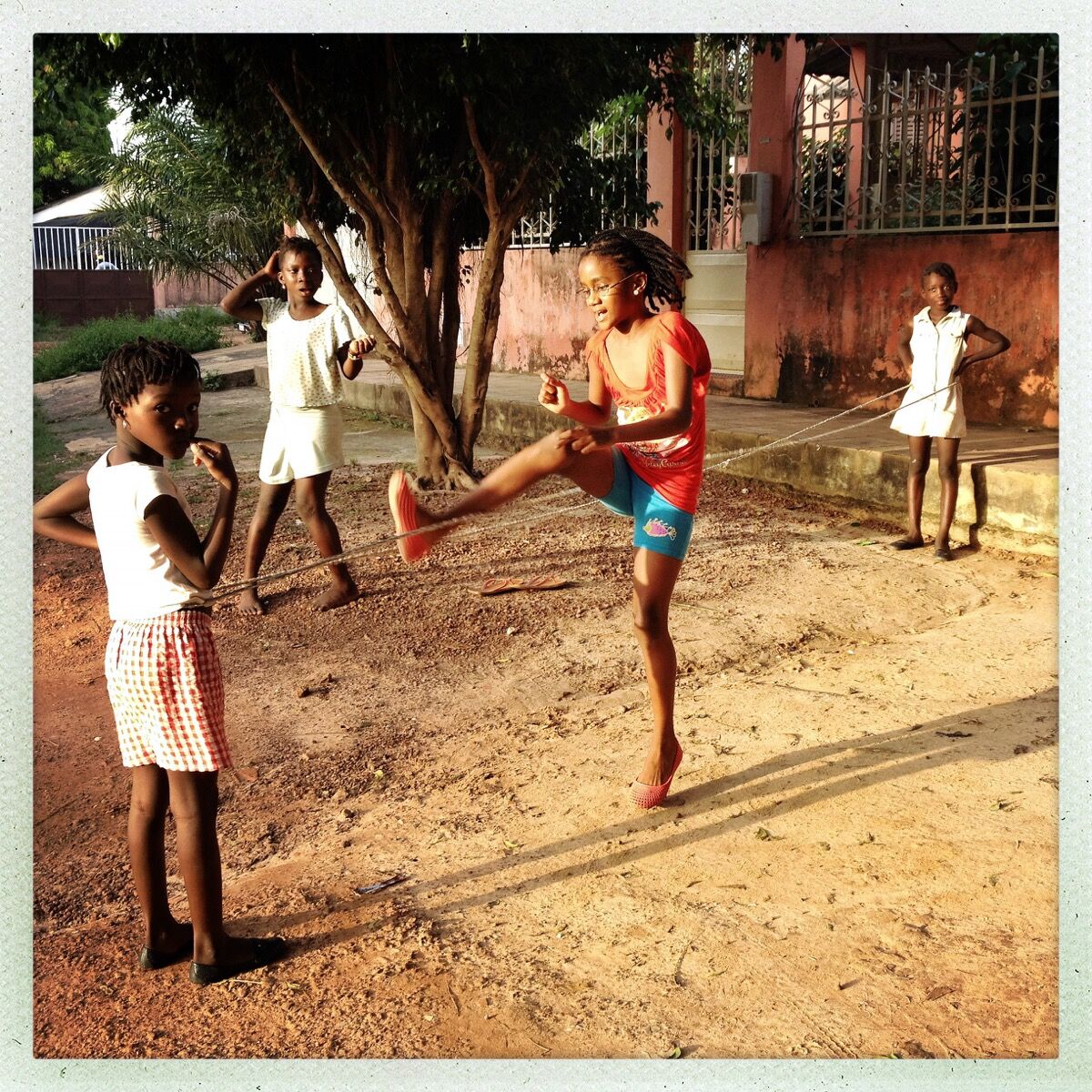 Advertisement
The just-published Everyday Africa book pulls from the Instagram account’s community of some 30 contributing photographers, both native Africans and international correspondents, collectively providing a balanced view from their respective corners of the continent. Their stories are often told via mobile phone—from Tom Saater’s image of a Nigerian law graduate en route to her bar summons to Andrew Esiebo’s snap of two women taking iPhone selfies in Lagos.
The book compiles more than 250 images taken throughout Africa. Indeed, you’ll find familiar scenes—like a Kenyan savanna plain dotted with zebras—but they may be sandwiched somewhere between a photograph of a Fellini-esque Italian sports club in Addis Ababa, Ethiopia, and an accountant enjoying a shoeshine in Conakry, Guinea.
Comments on the Everyday Africa account show how surprising some of these images are to certain viewers. In a photograph taken in Ghana by Nana Kofi Acquah, a young boy is seen playing with an iPad, his face illuminated by its glow. “Are iPads common in Ghana?” one person queries. (“This is a rich kid that poorly represents the majority,” another countered.)
DiCampo and Merrill chose to include these crowdsourced statements, rife with cultural stereotypes, in their book. It adds another layer to images like one by Holly Pickett, which depicts four children gleefully jumping rope in Bissau, Guinea-Bissau. Why, one commenter wondered, are Africans treated so horribly? 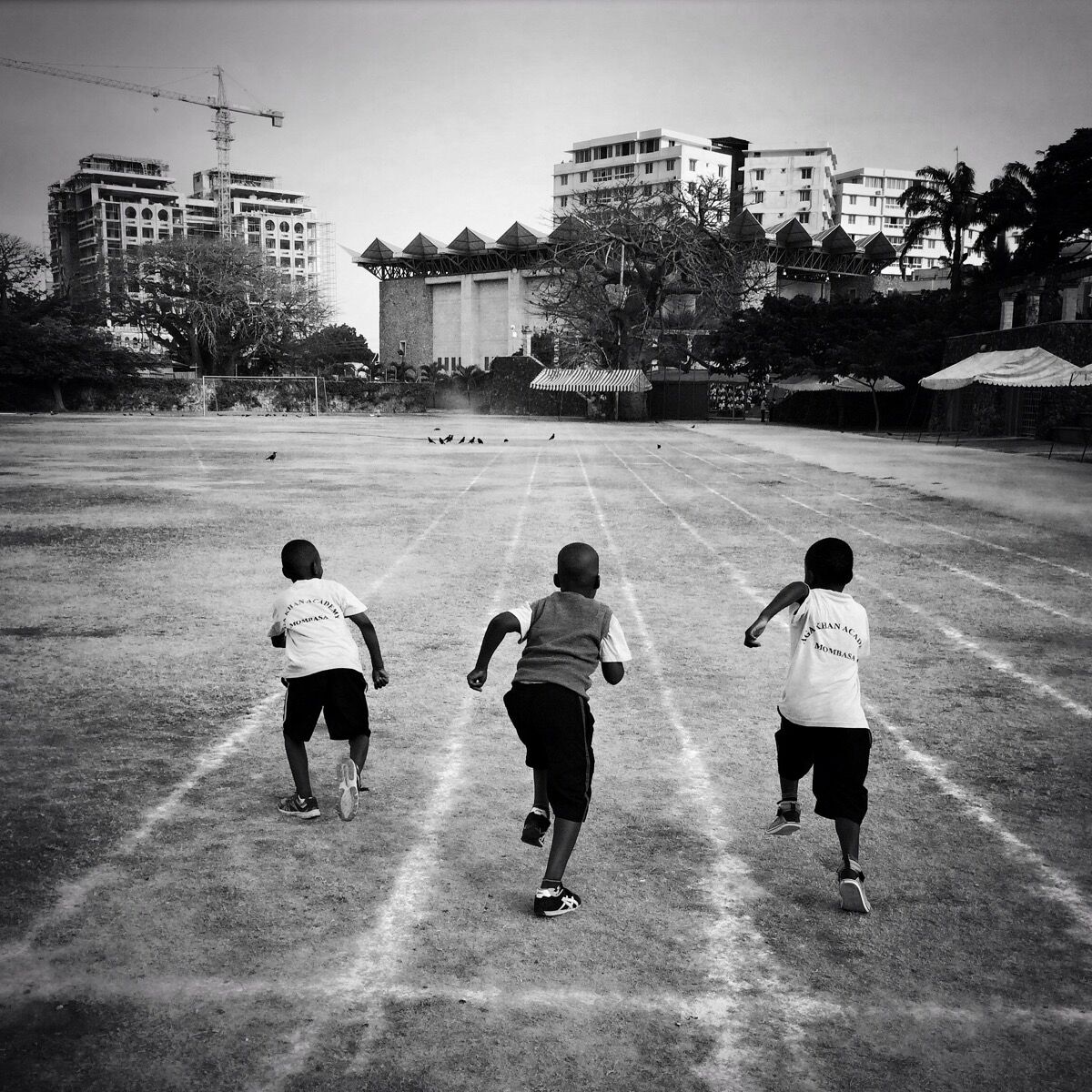 Three boys from the junior school of Aga Khan Academy in Mombasa,Kenya, race on the school’s track before the morning assembly. Photo by @austin_merrill. 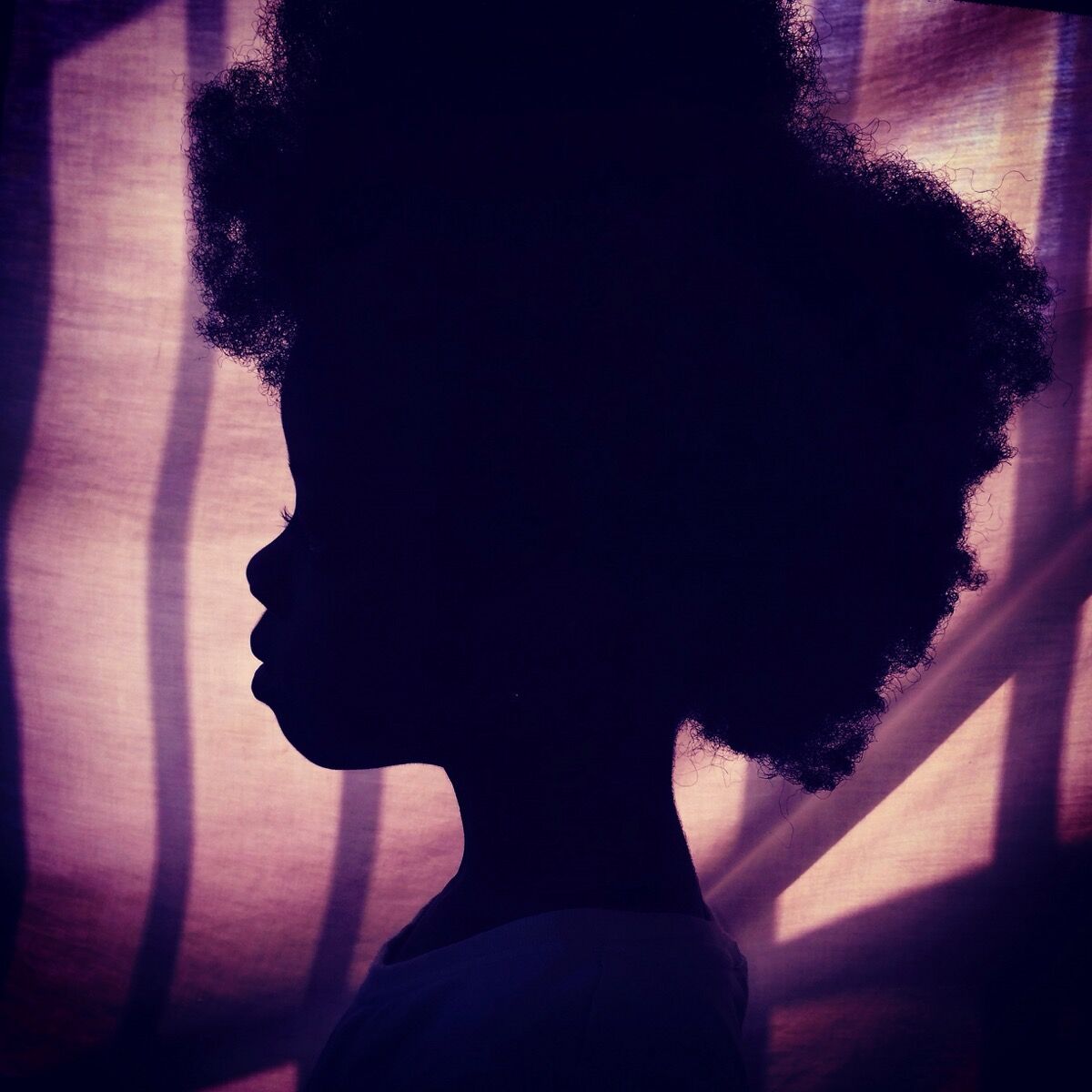 Afro on purple. Silhouette of my daughter. Accra, Ghana. Photo by @africashowboy.

“That comment has a lot more to do with what that person brought to the image than it does with the image itself,” says Merrill. He recalls the television commercials of his childhood in which American actress and activist Sally Struthers announced that, for just 50 cents a day, you could save the life of a starving child. “We see those sorts of charity-related promotional materials, and images of kids with flies on their faces, all the time. It’s in your head—so you see a picture of [African] kids playing and somehow you automatically see crisis or poverty.”
DiCampo and Merrill witnessed similar bias and ignorance while on assignment in South Africa in the midst of the Ebola crisis. “People were saying to us, ‘don’t get Ebola,’ which was happening thousands and thousands of miles away,” says Merrill. “That’s all you see in the news, so it contributes to what you think of a place,” he says.
Fortunately, their push for global visual literacy has found its legs. It didn’t take long for Everyday Africa to spur a global movement. In a year’s time, the unaffiliated Everyday Asia cropped up, quickly followed by a slew of geographical focuses—Iraq, Latin America, and the Middle East—or issue-based accounts, like Everyday Black America, Incarceration, or Climate Change. “New ones pop up all the time,” says Merrill. “The ones that stay active we try to connect with,” like Everyday American Muslim, launched last year in Baltimore in the wake of the U.S. presidential election.
Though many of these projects are formed independently, in 2015 DiCampo and Merrill established The Everyday Projects, a nonprofit geared toward the propagation of Everyday accounts and related projects, from exhibitions to classroom curriculum, in an effort to foster a better understanding of the world through photography. 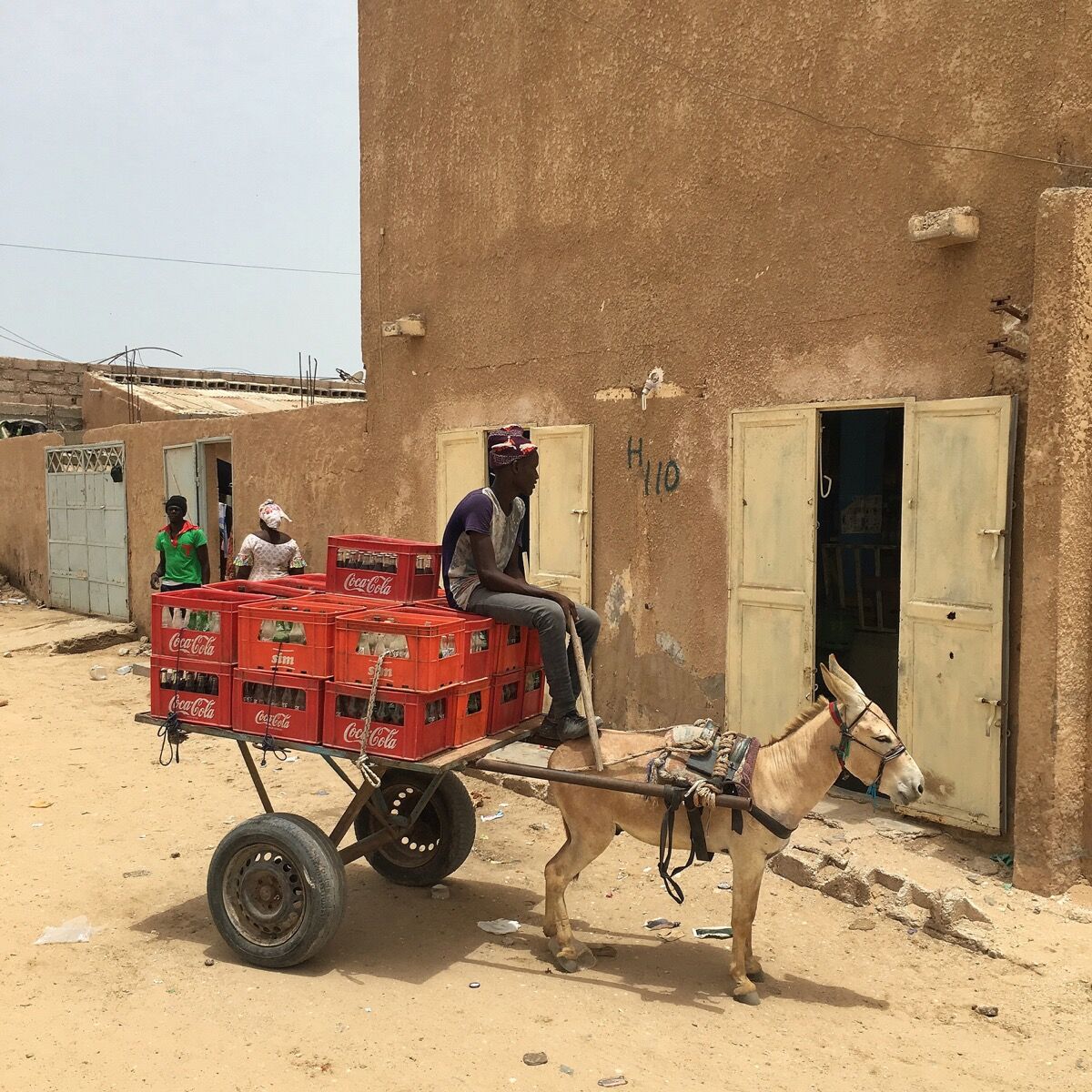 Aziz makes Coca-Cola deliveries with his donkey in Nouakchott, Mauritania. Photo by @dcoreraphotography. 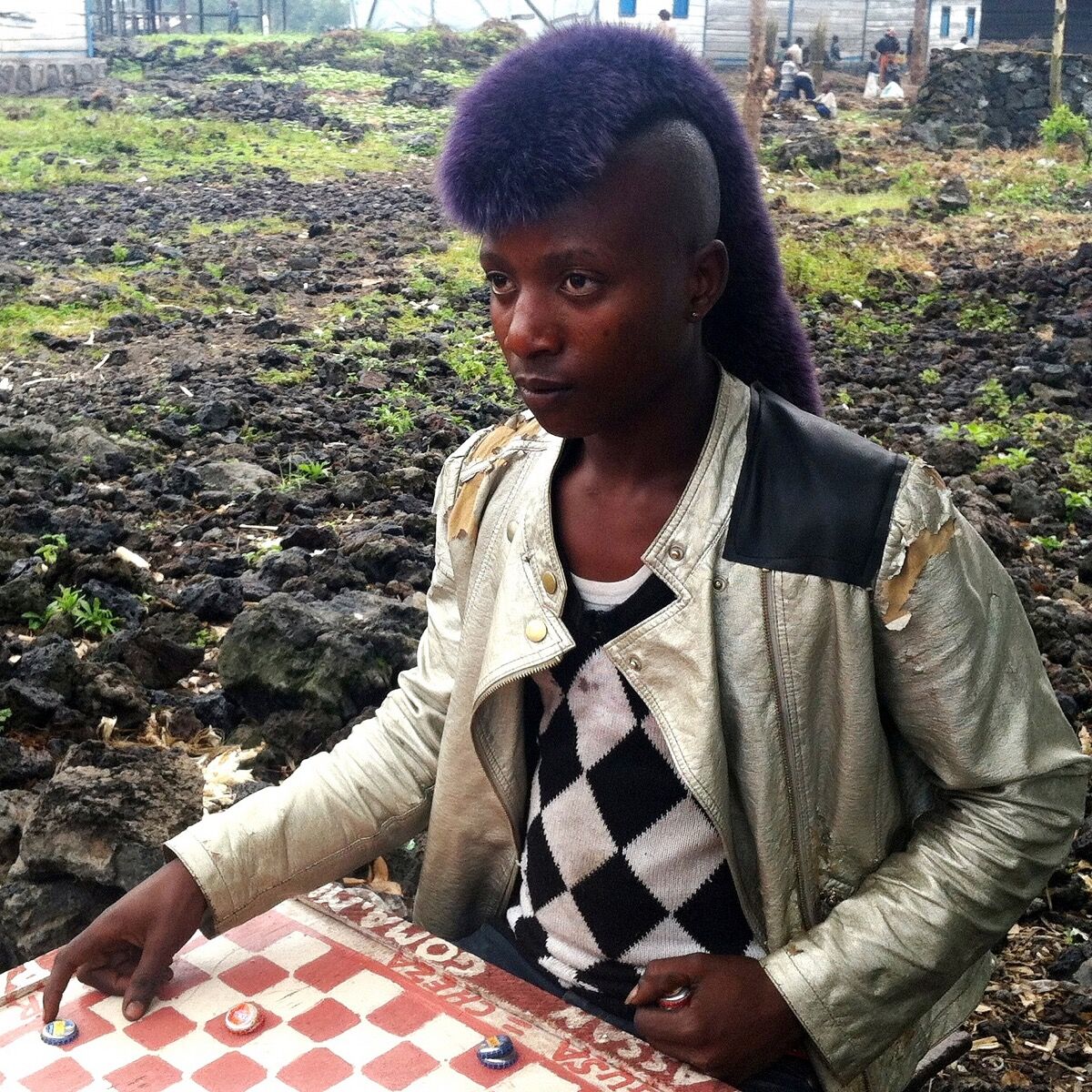 A young Congolese refugee in Goma, Democratic Republic of the Congo.I was impressed by the look of her hair. Photo by @leyuwera1.

“Education has become a central element to everything that we’re doing,” says Merrill. In 2014, they began a pilot program with middle school children in the South Bronx for which they discussed stereotypes of Africa, as well as misperceptions in the kids’ own neighborhoods, ultimately leading to the creation of Everyday Bronx.
From there, they’ve worked with students in Chicago, Atlanta, San Francisco, and Mombasa, Kenya. Through the Pulitzer Center on Crisis Reporting, they’ve even landed Everyday Africa a place in Washington, D.C.’s public school curriculum, in social studies and art classes. “It’s exciting not only to see the way kids respond to the photographs and this way of learning about the world, but to see how they tell stories about their own lives,” says Merrill.
DiCampo and Merrill are also working to translate the photographs and accompanying Instagram commentary into a theater program, where actors will recite the dialogue in a live performance.
In these varied ways, Everyday Africa continues to chip away at the exoticized narratives established during colonialism and long overdue for an update. It has birthed a global revolution in photojournalism that’s moving even faster than DiCampo and Merrill can lay the tracks. And within a political climate in which truth is continually on trial, the project gives an ever-growing community the power to play witness to reality as they’ve always known it.
Molly Gottschalk is Artsy’s Lead Visuals Editor.
Related Stories

Why Photojournalists Are More Important Now Than Ever 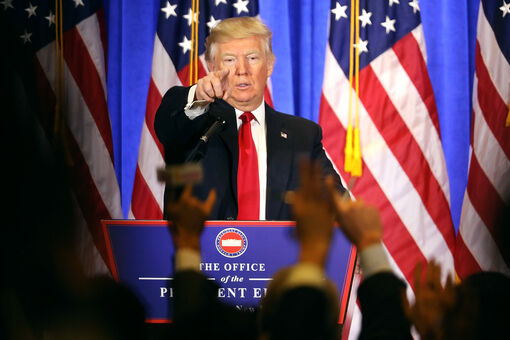 Why Photojournalists Are More Important Now Than Ever
Molly Gottschalk
Jan 12, 2017 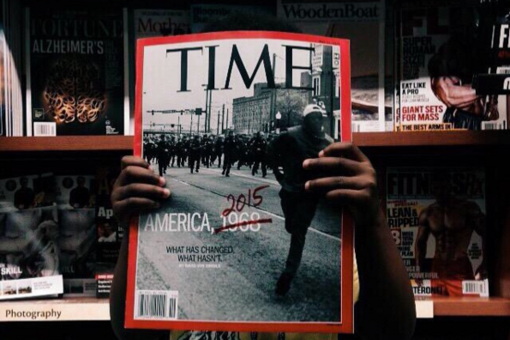 Why the World’s Leading Photojournalists Are Ditching Their DSLRs to Shoot on Instagram
Artsy Editors
Jan 21, 2016