Earlier this month, the art world superstar Brian Donnelly, a.k.a.
KAWS
, debuted a new set of his wildly popular “Companion” characters. But unlike his eminently collectible, limited-edition vinyl figures, this new endeavor consisted primarily of geolocated pixels.
The project, a collaboration between the artist and the digital art platform Acute Art, featured 12 augmented-reality versions of KAWS’s “Companions” floating above 11 cities across the globe, viewable only through Acute Art’s app. Dubbed “EXPANDED HOLIDAY,” it was a digital expansion of “KAWS:HOLIDAY,” a series of installations of large-scale inflatable sculptures around the world. Alongside public “installations” of the digital figures, the new project offers users the opportunity to acquire timed, subscription-based editions for $7 per week or $30 for a month. The company had also planned to release 25 limited-edition sculptures for permanent acquisition for $10,000 each. Donnelly ultimately decided to delay the release of these works in light of the global COVID-19 pandemic. Birnbaum said the company hopes to move forward with the permanent digital editions at a later date. In the meantime, in light of the pandemic, the company has extended the collaboration with free miniature (virtual) KAWS sculptures, which are available until April 15th. 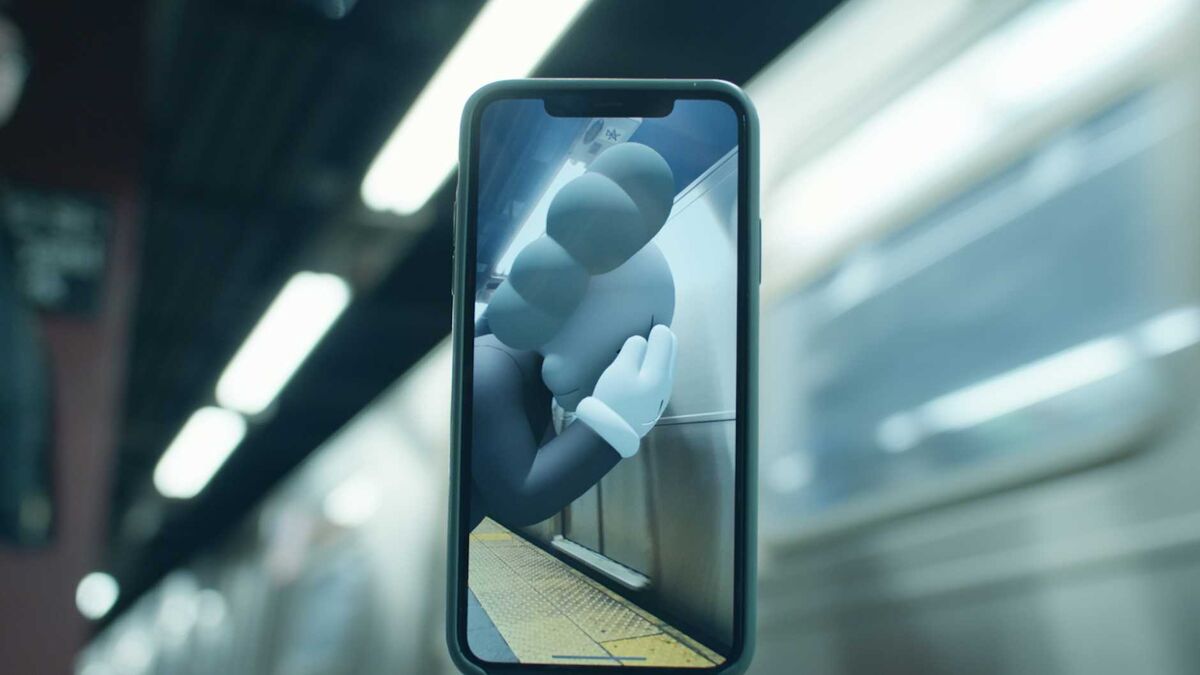 The $10,000 price tag for a digital edition is a higher price point than the average KAWS collectible. A Phillips auction of the artist’s work in December saw most vinyl figurines selling for figures between $1,500 and $5,000. But the digital editions are still relatively affordable in the context of his larger market, which saw a new auction record of $14.7 million set last year at Sotheby’s in Hong Kong.
The commercial aspects of the collaboration between KAWS and Acute Art would seem novel in any context, pushing the possibilities for selling both virtual- and augmented-reality art. In the midst of the deadly COVID-19 pandemic, with most of the art world going online, it seemed to offer a sophisticated way to interact with art while remaining socially distanced.
When Acute Art was founded in 2017, the commercial viability of virtual- and augmented-reality art had not been extensively explored. “VR is older, but it was a super-specialist thing,” said Daniel Birnbaum, Acute Art’s artistic director. “VR as something that people can use—where you can actually reach an audience—is a relatively recent thing. It was already a little bit further ahead in the architecture world, in certain kinds of entertainment, in the film world, but very few artists have done anything with VR.” 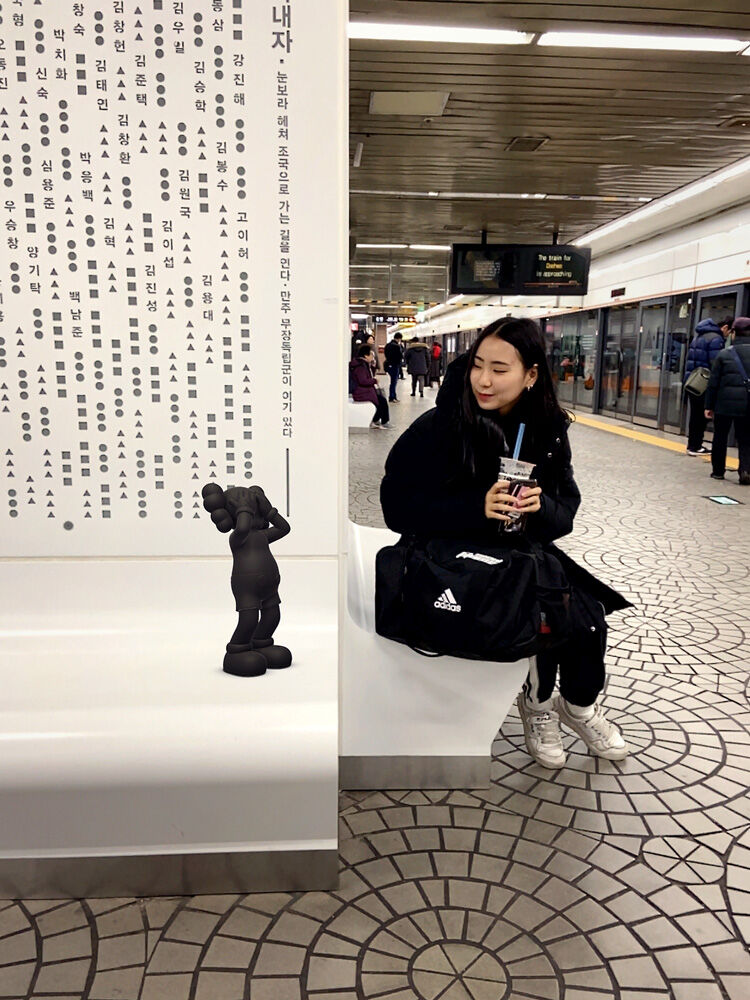 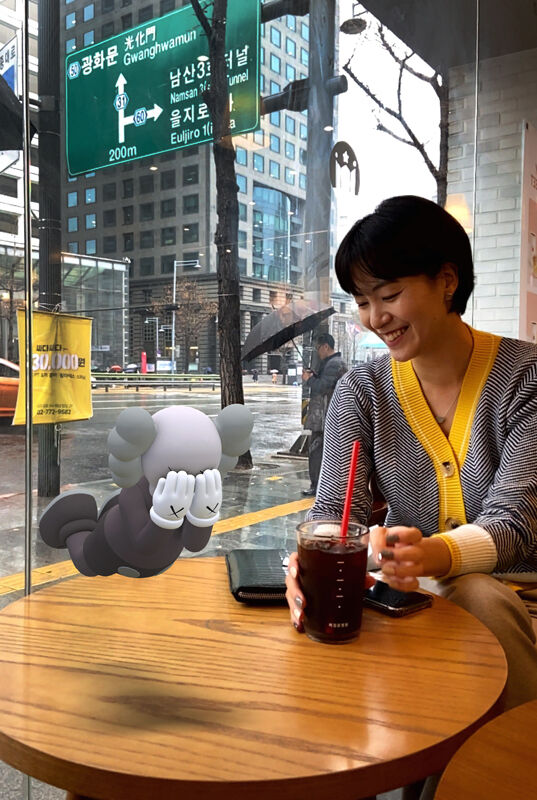 Advertisement
Birnbaum, who worked as the director of the Moderna Museet in Stockholm before starting at Acute Art in 2019, sees the company in the lineage of
Robert Rauschenberg
and Billy Klüver’s Experiments in Arts and Technology, which embraced the fusion of new technology with creative practice. “We’ve always talked about dematerialized aspects of art, since the birth of conceptual art,” Birnbaum said. “And AR really is an extreme example of this, where you can do global things that are not material but still visually overwhelming, or at least visible.”
Acute Art’s initial projects included collaborations with heavyweight contemporary artists such as
Jeff Koons
, who created a virtual avatar of one of his perfectionist, balloon-like sculptures, and
Marina Abaramović
, who made use of virtual space as an avenue for intimate performance. Birnbaum said the company’s focus is on reaching wide audiences. “The [KAWS] exhibition is like a massive, monumental art world Pokémon Go,” he said. 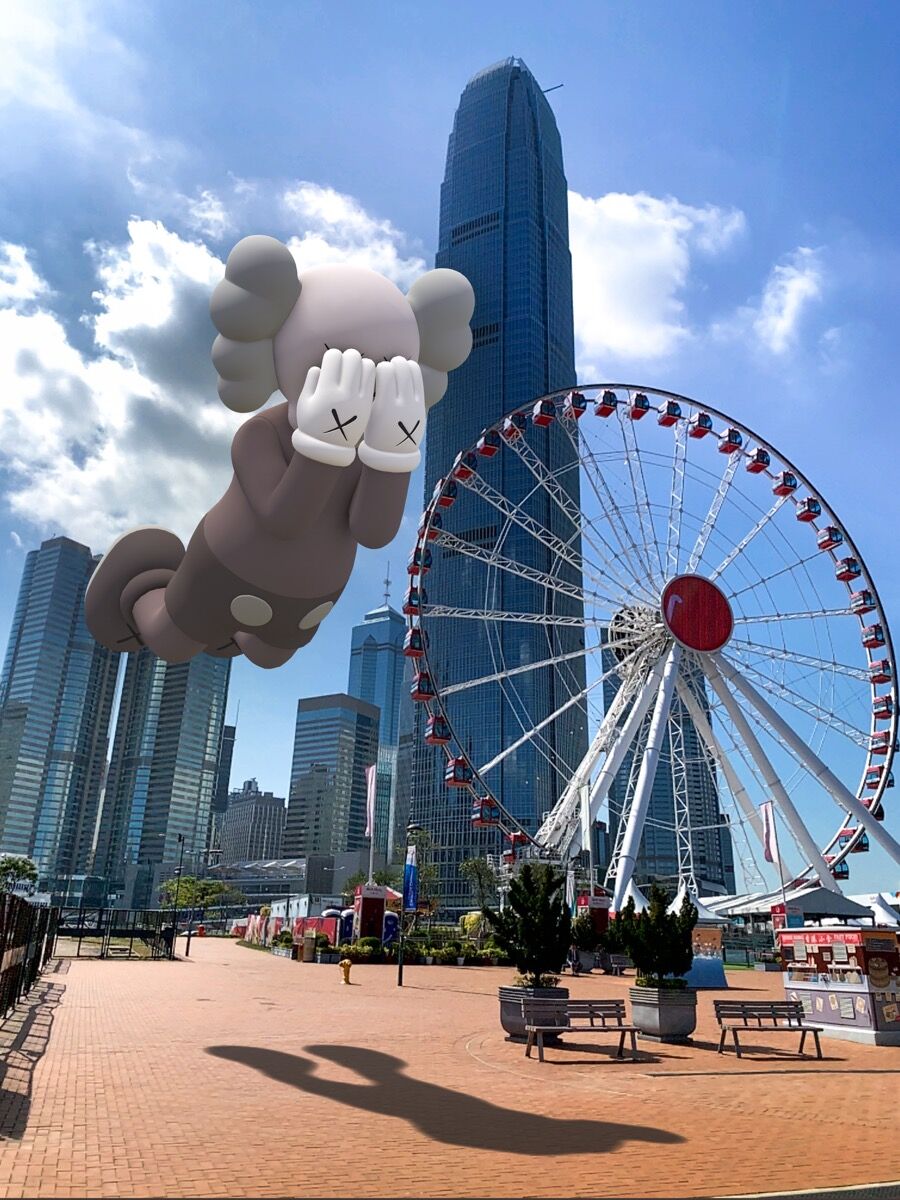 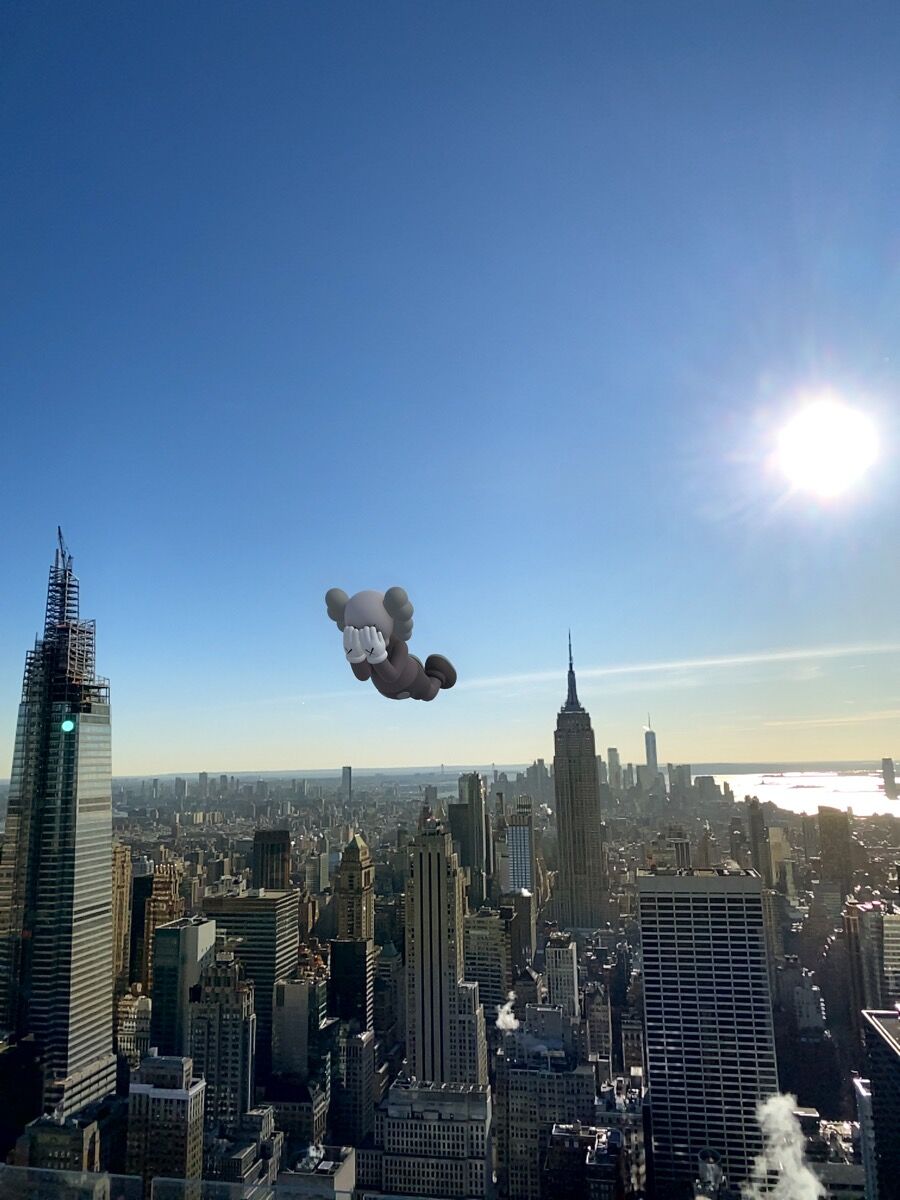 Birnbaum pointed to KAWS’s global audience as the driving force behind the collaboration’s success. He said Acute Art saw 100,000 app downloads in the days following the launch of “EXPANDED HOLIDAY,” with total downloads now hovering around 250,000. But the smaller-scale editions, which were available to buy or rent, may have an even greater impact.
“He’s created something that I don’t think existed anywhere before—he turned AR into a participatory interactive project,” Birnbaum said. “You can become your own curator and place this little object in your kitchen, in your mother’s living room, your girlfriend’s bathroom. You can share it with friends, send it as a post—it’s become this incredibly visible thing.”
According to Birnbaum, it was Donnelly who initially proposed making pieces available to rent when Acute Art approached the artist nearly a year ago. It was not something the company had attempted before. Previous iterations of the Acute Art app had required monthly subscriptions to access its projects, but the company had never facilitated the direct rental of works. And while the project had been in development long before the COVID-19 pandemic brought massive structural changes to the way the art world conducts business, the decision to provide work that could be purchased and placed in the home proved to be a prescient one. 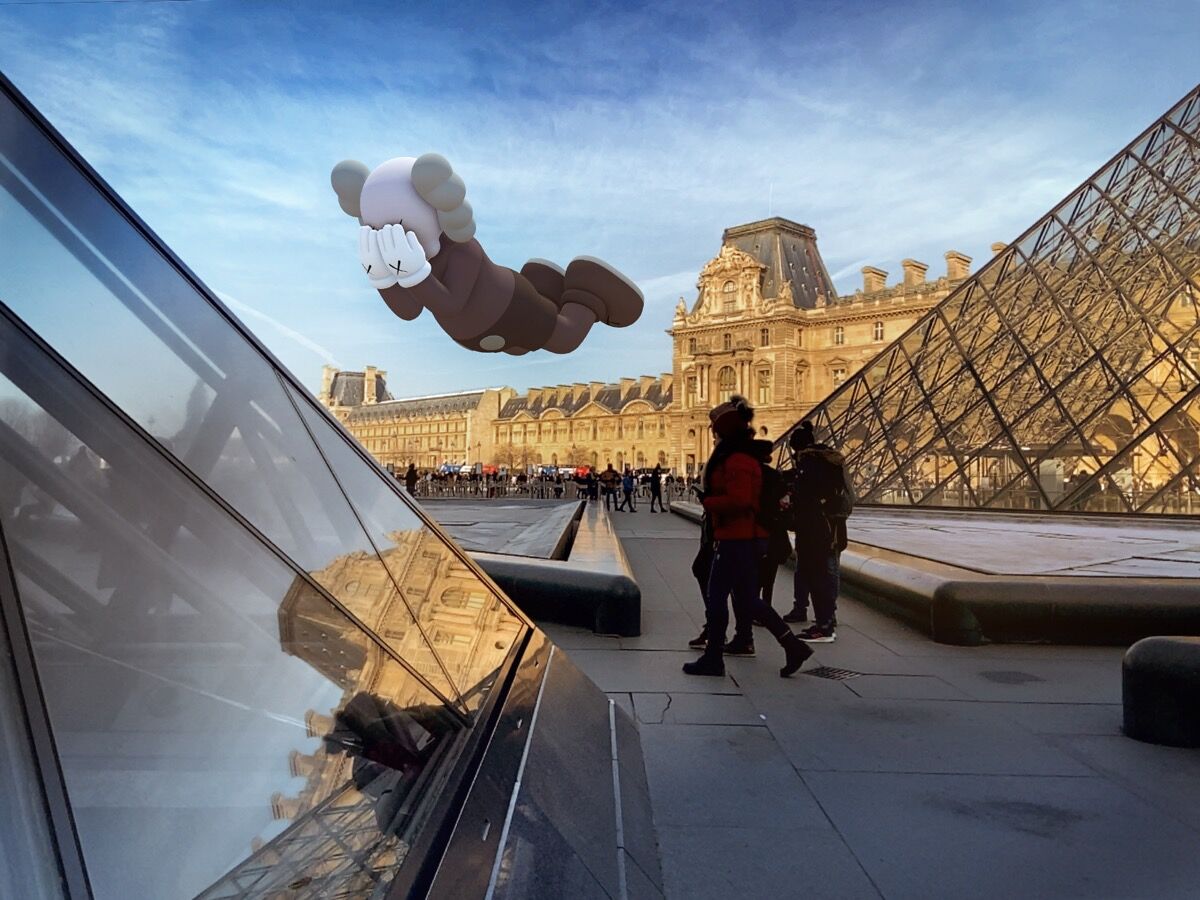 In the past, Acute Art had positioned itself as a democratizing force, one that counteracted not only the exclusivity of art fairs and biennials, but also the attendant costs—both monetary and environmental—that come with participating in those events. But with the mandatory isolation that has upended most art world institutions, the company’s focus has taken on another dimension.
“What we were anticipating as more of a political conversation, something that doesn’t have to do just with your perception or with technological possibilities, all of a sudden became super relevant,” Birnbaum said. “And now of course, we’re thinking, ‘What can we do?’”
That has mostly meant making the KAWS project as widely accessible as possible, rather than exploring further sales avenues. “We haven’t really developed Acute as a marketplace,” Birnbaum said. “It seemed like a bit of a conservative move, to pretend that a VR piece would actually be just like a photo or a piece of sculpture.” In many ways, VR art is in its infancy as a collecting category, though some enterprising artists and dealers are moving the needle.
In the immediate future at least, much of the art world will be forced to operate online. Birnbaum hopes that, instead of driving art to be a strictly online experience, the current moment can be used as a way to further integrate the virtual and the tangible. “I think the art world needs a new toolbox,” Birnbaum said. “I don’t think AR and VR will solve everything, but they’re part of that new toolbox.”
Justin Kamp is an Editorial Intern at Artsy.
Related Stories