How to Do a Virtual Studio Visit with an Artist 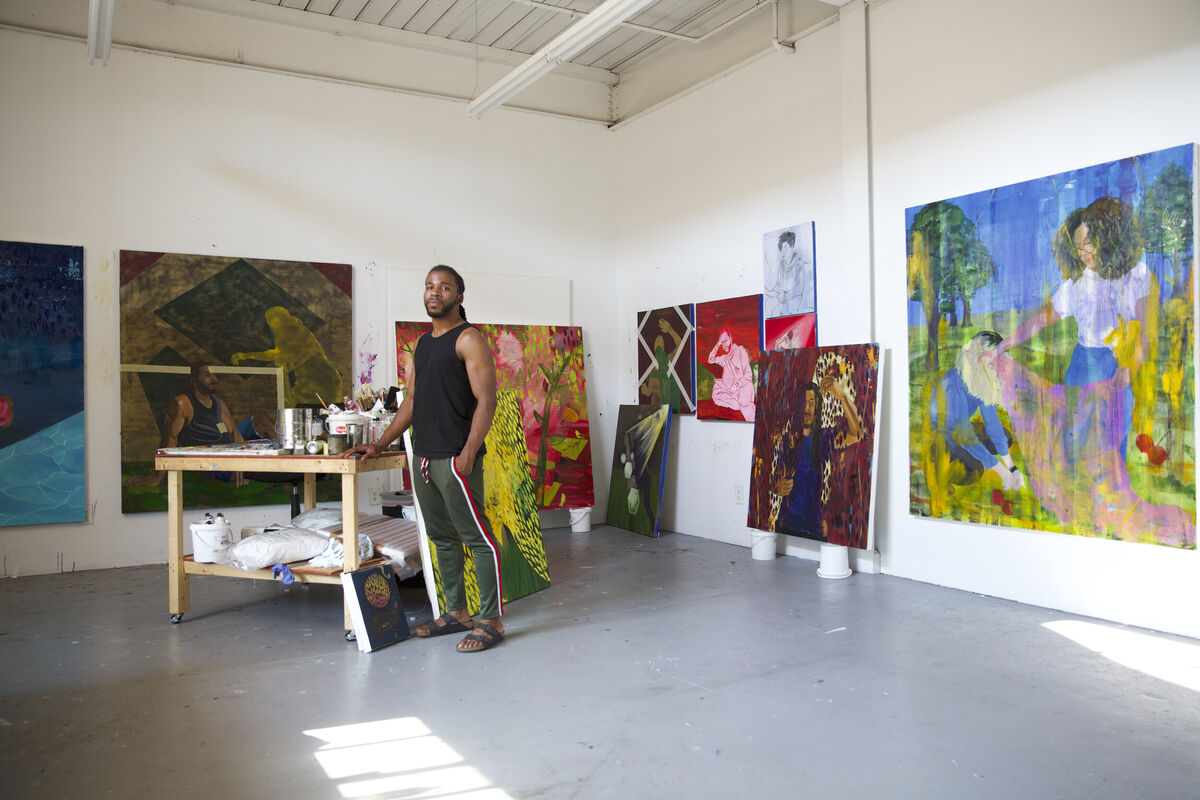 Remember the good old days? Back then, a studio visit involved visiting an actual studio—likely a slightly cramped, charming space, with the tang of turpentine hanging in the air. That sort of face-to-face meetup with an artist had its own particular rituals, routines, and expectations.
Now, the rules of the studio visit have been swiftly and completely rewritten by the COVID-19 pandemic. Hanging out and chatting for an hour in a small room that may or may not have windows? That’s so 2019.
But the art world is resilient and adaptable. While social distancing might prohibit old-fashioned studio visits for the foreseeable future, critics, curators, and artists have embraced the virtual. That means connecting on platforms like Zoom, FaceTime, or the underappreciated and chic Whereby—trying to conjure some of that “in-real-life” magic despite the occasional technical snafu.
Below, artists share their tips on how to make a virtual studio visit an engaging success.

Sure, many people find video chat to be alienating and off-putting. But embrace it with an open mind and you might even discover that it opens up new possibilities and new ways of engaging.
“There’s a certain level of intimacy that I’ve experienced during virtual studio visits and critiques that I haven’t felt during in-person tours or conversations,” said Luján Pérez Hernández, who recently finished her MFA at the New York Academy of Art. “I can’t pin down why, exactly, but the conversations have seemed more genuine.”
Nadja Verena Marcin
, a performance and video artist currently based in New York, concurred. Virtual visits she had in April and May proved surprisingly inspiring. “These unusual, intimate conversations with curators, some of whom I met for the first time, were rather personal and open-hearted,” she said. “A feeling of sitting in one boat, sharing empathy, speculating about the art world—and what good and bad this disaster might lead to.”

Walter Scott, a Canadian visual artist and the cartoonist behind the incredible Wendy series, recently synced up with an Amsterdam-based curator over Zoom. “What was really helpful was that we had very low expectations,” he admitted. “It was conversational, and I didn’t have to wave my computer around to show her objects in my studio. It’s good to go in looking primarily for a conversation.”
On a technical note, Scott stressed coming to terms with the bugs and quirks of the communication platform itself. “Like any Zoom conversation, give ample time for the person to finish their thought before responding,” he said. “The digital lag causes so much speaking over each other. Patience!”

Be creative with your staging 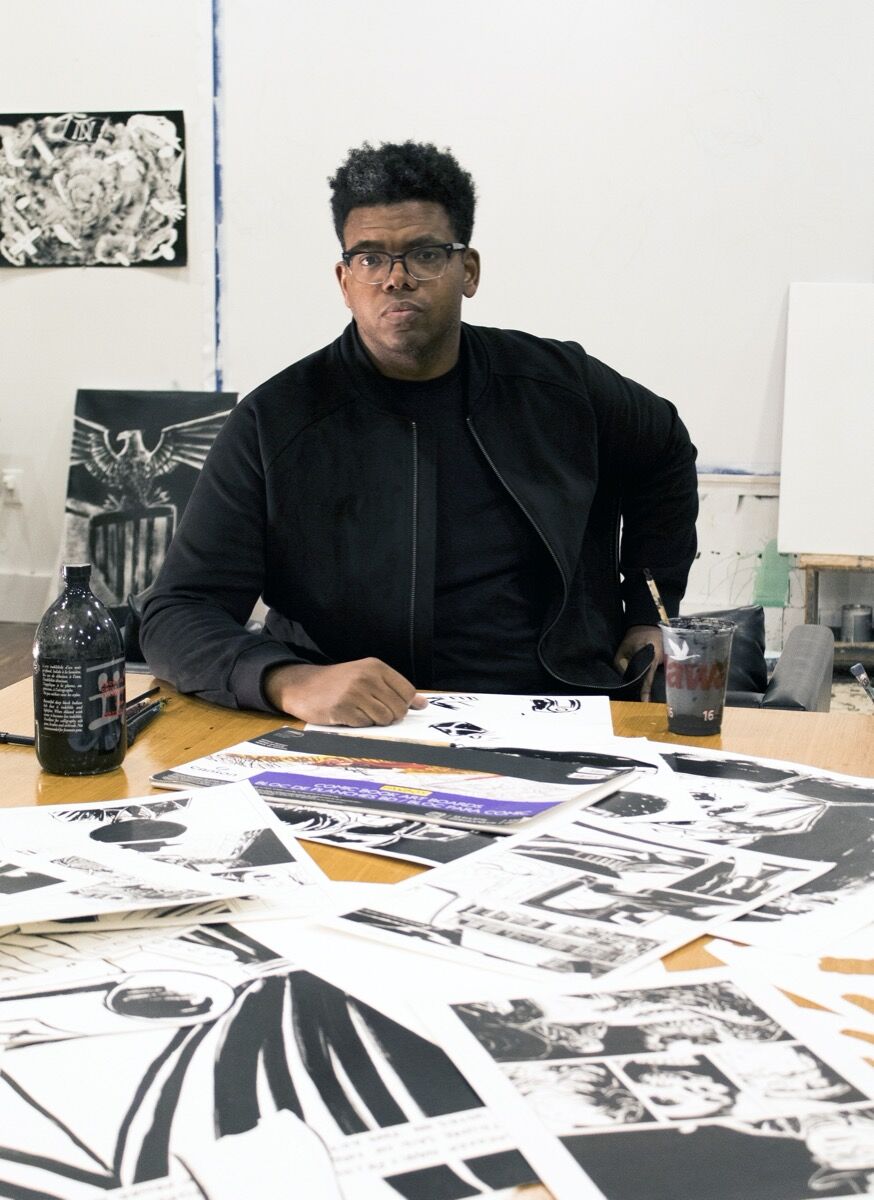 Portrait of Mark Thomas Gibson in the artist’s Philadelphia studio, 2020. Photo by Kathryn Gegenheimer. Courtesy of the artist. 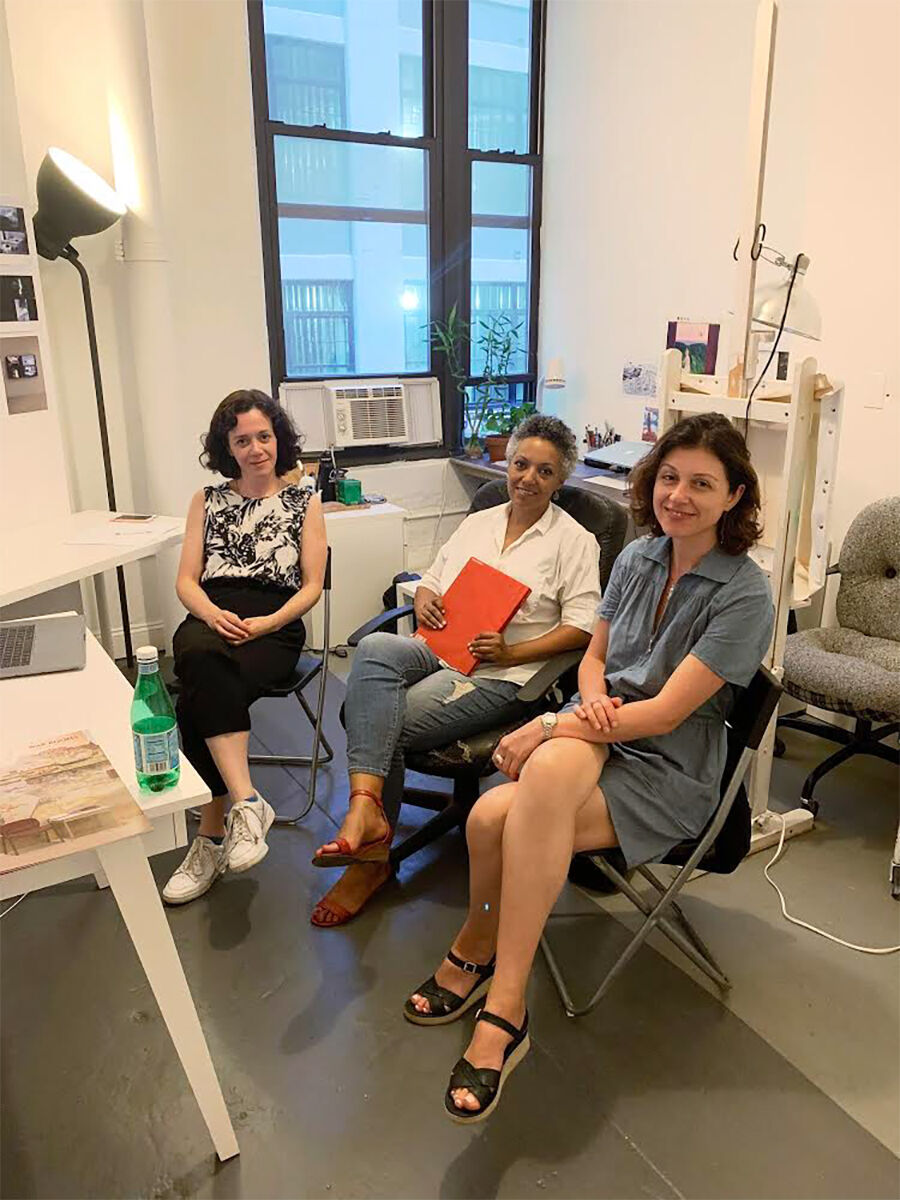 With most conversations and interviews happening virtually these days, fixating on what’s in the background during a Zoom call has become a minor obsession. (An entire Twitter account exists to pick apart the contents of prominent bookshelves, for instance.)
Artists hosting a virtual studio visit should keep in mind that what’s visible on-screen will affect how their guest will interpret them, and the work. So why not have a little fun with it?
“Be creative—that doesn’t mean bizarre, necessarily—but you’re creating an environment and an aesthetic, whether you like it or not, and as humans we will read into it,” the artist
Mark Thomas Gibson
explained.
Position relevant artworks in the frame—your own or those of others—that can act as conversation starters. Stack some erudite books (that you’ve actually read) on the corner of your desk. Make sure you’re wearing pants, in case you have to stand up unexpectedly. And feel free to hide a few sly Easter eggs here and there to reward virtual visitors who are especially observant.
“I like contradictions,” Gibson said. “When I was a grad student, I had a Ronald Reagan calendar on my wall by the door. After whatever political or art-related conversation I had with a visitor, they’d always see it on their way out.” That unexpected and left field touch, he said, was meant to mess with people’s heads a bit, to make them “question everything that was said” during the visit, and to always “keep them guessing.”

Get your act together in advance

A traditional studio visit leaves room for spontaneity—artist and visitor can wander around the space, taking a look at what hangs on the walls, or digging into flat files to see older pieces. A virtual studio visit is a lot more constrained, so it helps to overprepare. Pérez builds a folder on her computer that contains any images or text that she’d like to cover during the visit, an easy way to “make the conversation more fluid.”
“I suggest having a cache of files of other works that have been scanned or documented,” added Gibson, “and also a few works held back that you haven’t blasted on the web or Instagram to share.”
Structure helps, as does having a loose agenda. “If this is a first-time meeting, send a short video compilation or slideshow that introduces the curator to your recent work, prior to the visit,” said Marcin. “Point at new work that you’d like to discuss in greater depth…[and] specify what feedback you seek.”

When you show up at an in-person studio visit, it’s pretty rare for the artist you’re speaking with to freeze or glitch. But virtual studio visits have to contend with shaky Wi-Fi connections, faulty applications, and plain bad luck. There are some best practices to follow to avoid unfortunate outcomes.
“Do not try to set up a virtual visit from your friend’s or family’s suburban or countryside home,” Marcin said. “If you’re meeting for the first time, it can be rather frustrating to view and hear each other pixelated, with a robotic, staccato voice. Be prepared, do your homework—jump in your car, drive to the next town with bandwidth.”
“I definitely suggest checking five times before entering a meeting that both your camera and microphone work,” Pérez added. Still, realize that computer meltdowns can happen to the best of us, so don’t make a big deal out of it when they do. “Avoid apologizing for your lack of technological wittiness; we’re all in this together, trying to figure out the best solutions to transition to this virtual platform,” Pérez continued.

Phone? Computer? Why not both? 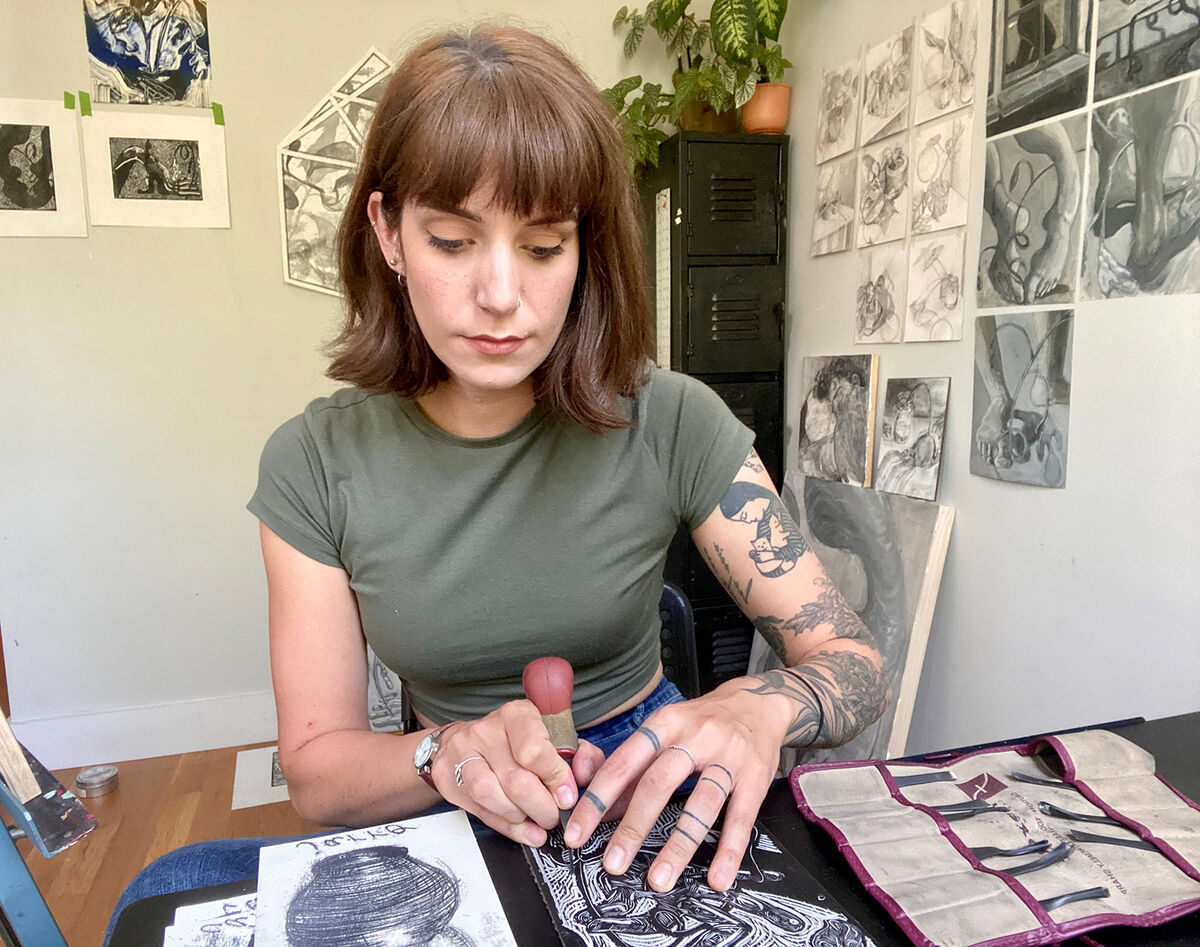 Portrait of Lujan Perez. Courtesy of the artist.

Advertisement
Running around your studio while video-chatting on your phone can make for a queasy experience. But sitting in one spot and talking at your laptop screen can also feel too static, and a little boring. So why not combine both methods?
Many video-chat apps allow you to join the same room multiple times, which means you can log in simultaneously on your MacBook and your iPhone.
Use your laptop for casual conversation about ideas, and then pick up your phone to get up close and personal with artworks in the studio, zooming in on specific details. But don’t “show off art while using your front-facing camera,” cautioned artist
Dominic Chambers
. “Change to the back camera. This way, you don’t have to guess which part of the work the viewer is looking at.”
If you’re feeling ambitious, why not go for an even more elaborate setup to create a true multimedia experience? Tyler Woolcott is the founder of the new online platform StudioVisit, which organizes and presents virtual group studio visits with well-known artists. When StudioVisit set up a virtual visit with
Andy Holden
, Woolcott said the British artist “used multiple screens, including one to broadcast his cartoon avatar, another to showcase his work, and another of himself, live.”

Dream big, since art world VIPs may be more accessible at the moment

You might not be able to snag a virtual studio visit with Klaus Biesenbach—who has quickly become enamored of the format, sharing recordings of his visits on YouTube—but now might be the time to reach out to curators and critics who previously seemed out of reach.
“The best thing is the accessibility of the virtual format,” said
Anna Park
, a young artist whose work was included in an exhibition that went on view at Half Gallery during New York’s lockdown. “Although I do much prefer in-person studio visits, it’s only possible when people are in town, and [when you can] coordinate schedules. With Zoom visits, people are more open to do them casually, since they can be done in the comfort of their own homes.”
The Italian artist Nadia Antonello, one half of the duo
Antonello Ghezzi
, has been using the past few weeks to cast a wide net. “We contacted a large number of curators and museum and festival directors,” she explained, which resulted in responses from around the world, including France, the United Arab Emirates, CanadaMontreal, California, and South Africa.
Antonello surmised that COVID-19 has meant art world professionals “had more time to respond, to observe our portfolio with care.”
For big-time curators, 2020 is shaping up to be the year when jet-setting from one swanky international biennial to the next is replaced by hopping on another Zoom call with an intriguing artist you’ve never met in person before.

Lean in to the liberating potentials of digital space

The art world has long been concentrated in various so-called “power centers”—cities like New York, London, Berlin, and Los Angeles. That often gives an unfair advantage to artists who have the financial means to live (and rent a studio) in such expensive locales. It’s very easy for an assistant curator from the Whitney Museum to hop on the subway to Bushwick, Brooklyn—and a lot harder for them to take a day trip down to Raleigh, North Carolina, for a quick studio visit.
Woolcott, the founder of StudioVisit, underscored how virtual visits are flattening geographic differences. “It makes studios accessible from anywhere in the world,” he said. The artists he launched StudioVisit with are a far-flung bunch, working everywhere from Argentina (Ad Minoliti) to Algeria (Lydia Ourahmane).
“This form of engaging with culture is going to become more normal, and this situation has proved that we can succeed in creating new sustainable models within the art world,” Woolcott said. “While there are assorted pros and cons, of course, it opens up new doors and possibilities for artists.”
Will the virtual studio visit thrive even after it’s safe to hang out in person again? If so, that’s great news for young artists living in places that so often are ignored.
“Quarantine has most likely opened up a bit more curiosity from collectors, dealers, and galleries who are interested in finding artists outside of New York,” said Dominic Chambers, who is based in New Haven, Connecticut, and will show his work this September at Anna Zorina Gallery in Manhattan. “Now that it’s become commonplace for studio visits to take place via Zoom or FaceTime, it’ll surely draw attention to artists who otherwise may have been overlooked.”
Scott Indrisek
Related Stories

What Collectors Need to Know about Banksy’s Market 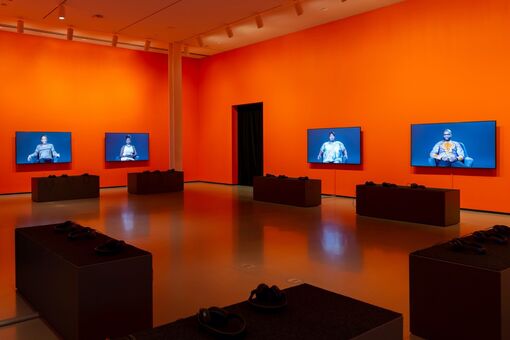