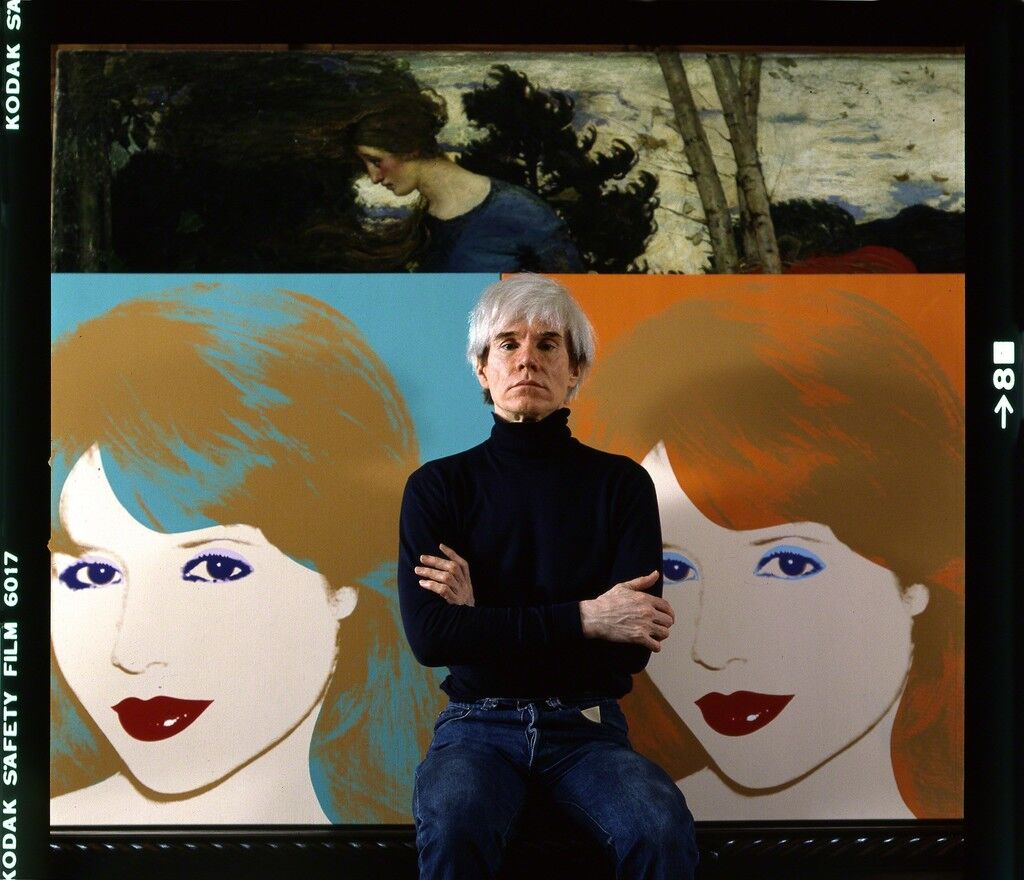 Harry Benson
Andy Warhol, New York, 1983
Contessa Gallery
When institutions present large exhibitions of iconic, deceased artists, their primary objective is often to ask, and answer, a comically predictable question: “Why is this artist relevant today?” What generally follows is a battery of claims, speeches, press releases, and testimonials to justify the museum’s efforts. These campaigns seek to exhume and hook artists to current events, thereby relocating them in the now. Such attempts usually founder because very few artists transcend their eras and remain vital to subsequent generations.
The Whitney Museum of American Art’s enormous new exhibition, “Andy Warhol: From A to B and Back Again,” operates in this mold, asking us to consider why
Andy Warhol
still matters. The show, titled after the artist’s autobiographical 1975 publication, comprises 350 works, from student drawings of the late 1940s to Polaroid-based portraits of celebrities from the mid-1980s. But in 12 catalogue texts, the truest, simplest response is never given regarding Warhol’s rare and genuine endurance. Namely, that if one were to ask people on the street—with no link to, or active interest in art—if they know of Andy Warhol, the majority would. No other artist has crossed over from the art world to so successfully inhabit the wider cultural landscape. 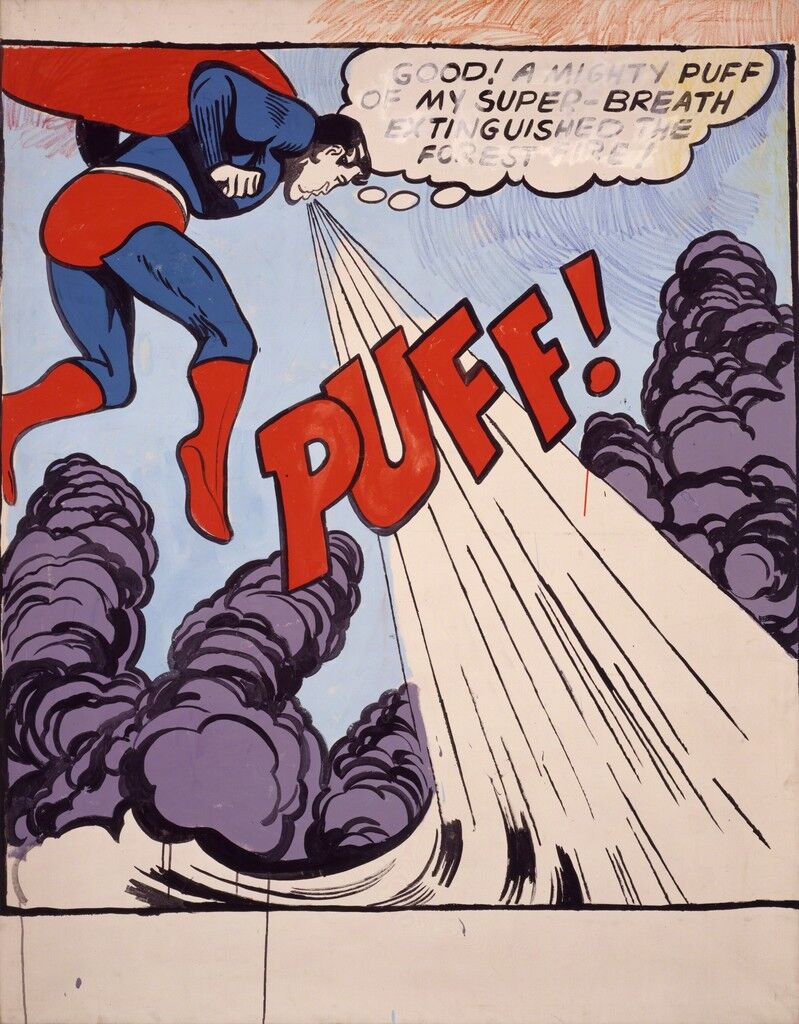 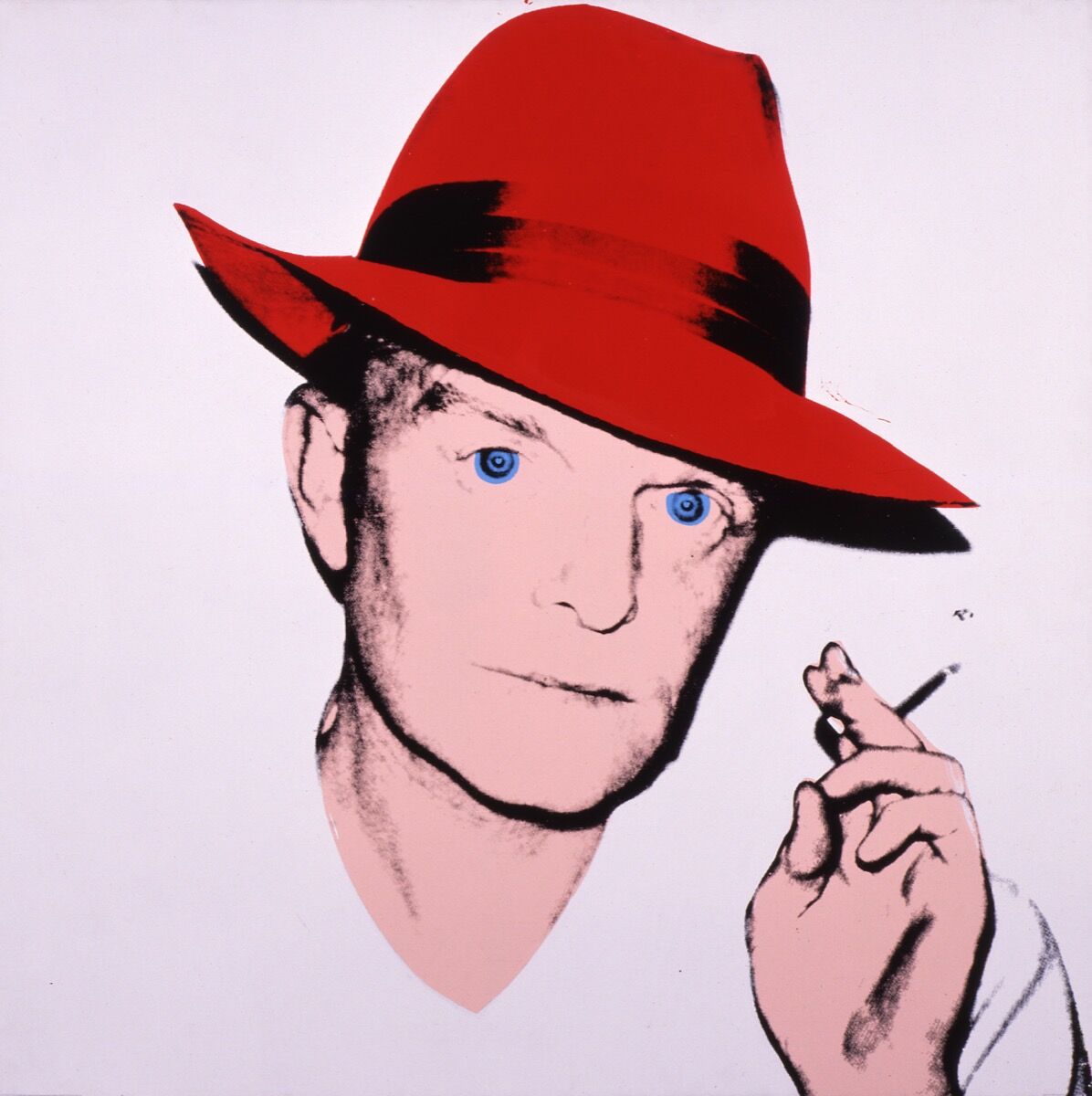 Perhaps it is too indelicate, or not academic enough, to highlight Warhol’s appeal merely by virtue of his ubiquity. Certainly the catalogue is exhaustive, but it needn’t have tried so hard. The mere fact of Warhol’s reputation is as impressive as it needs to be. How he achieved this is revealed in the exhibition, and it is one of the Whitney’s chief achievements here.
The last major American exhibition of Warhol’s work took place back in 1989, at the Museum of Modern Art in New York, which seems surprising, and endows the Whitney’s endeavor with timely properness. It might also explain an incongruous curatorial blemish at the beginning of the chronological design in the fifth floor galleries, where the bulk of the exhibition is. What appears to be the first room presents not Warhol’s earliest work, but some of his most famous, including Brillo Boxes (1969), which is a version of the 1964 original installation, and his paintings of Campbell’s soup cans, from 1962. It seems a dip in confidence to begin with a reminder of something that nobody has forgotten.
After those greatest hits, though, the show backs up to explore Warhol’s commercial work in the 1950s as an illustrator for designers (I. Miller & Sons), fashion magazines (Glamour), and department stores (Bonwit Teller); his illustrative work also extended to media organizations and even the pharmaceutical industry. It is the most important section of the exhibition because it reveals Warhol’s experimental attempts and stumbles as he sought a fine art aesthetic out of his professional experience. This trove includes a quite magnificent series of gold, mixed-media collages of ladies shoes incorporating metal leaf and ink on paper. These were made in 1956, and exhibited at Bodley Gallery in New York the same year. Intended as portraits of prominent names in fashion or society, they almost dance off the page with joie de vivre. 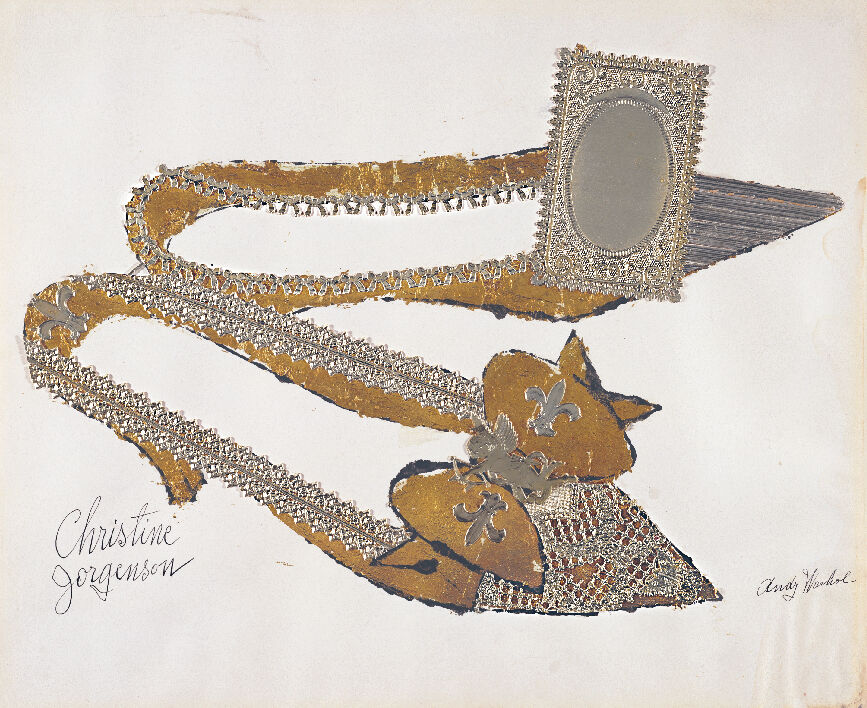 Advertisement
Striking a much more somber tone is The Nation’s Nightmare (1951), a drawing commissioned by CBS for a radio program on drug abuse in the United States, and published in the New York Times as an ad for the broadcast. It shows a young man with an anxious, furtive bearing as he injects heroin, his face turned from the viewer. Warhol made the piece by blotting wet ink from an initial line drawing onto a blank piece of paper, to make a mirror image—a technique that would become a common device in his practice.
Warhol, like any artist who begins in the field of retail to earn a living, would have been exposed to philosophies that combine technique, economics, and creativity. When a visual merchandiser places a set of china in a store display, or a brand hires an illustrator for a magazine campaign promoting its shoes, the effectiveness of those efforts is recorded and analyzed. Correlations between art and finance become second nature to the graphic designer or the commercial artist. When a company promotes a sale, it has fractions of a second to catch potential consumers’ attention (that’s why bright red is nearly always the color used for sale banners). Visual sensation, color, sight lines, and aspirational messaging are all factors. 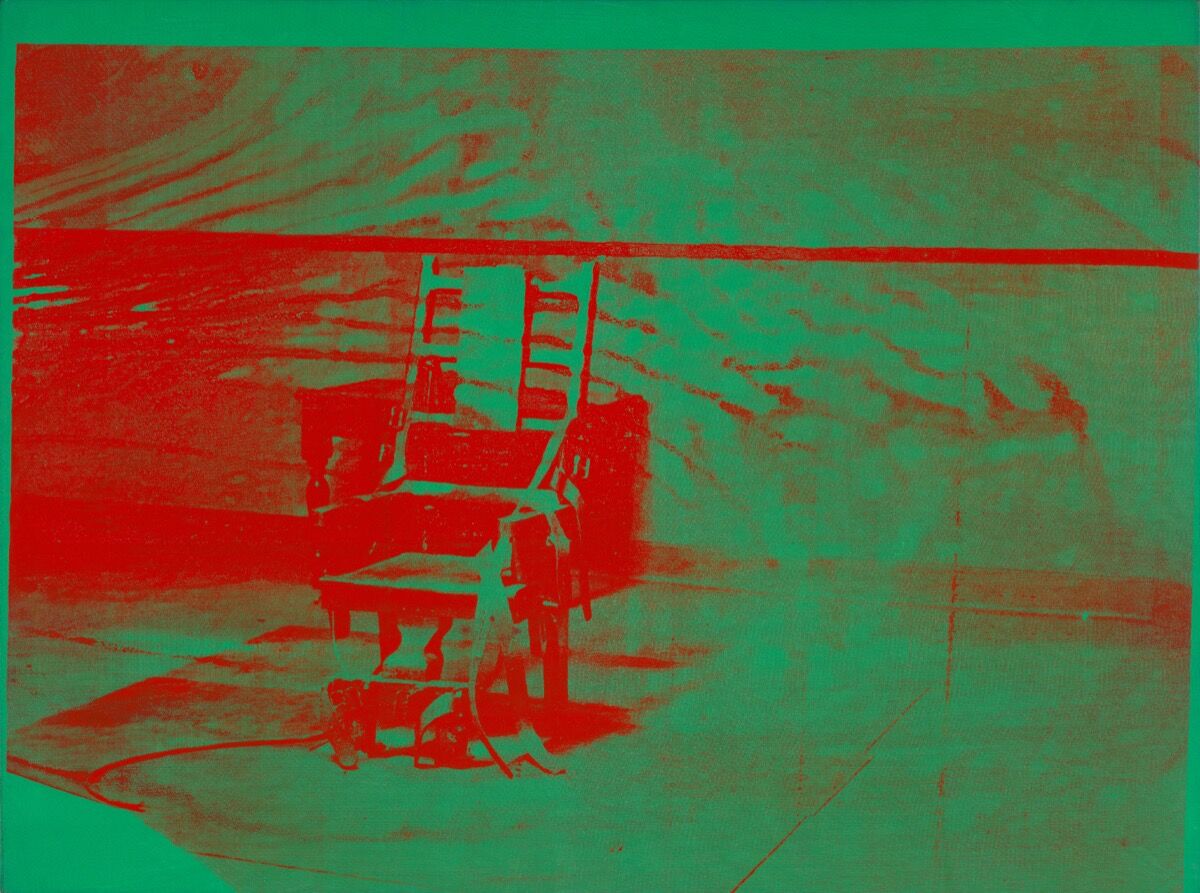 The retail industry’s aim is to form brand awareness and ultimately produce sales. Warhol learned these tools quickly and well, honing skills that would underpin his career. This carried over into his fine art career in interesting ways: For instance, the mass production of goods—their sameness—has to be offset by a note of specialness for individual customers. Consider, in that light, the slight variations in the silkscreens Warhol would make beginning in the early 1960s, featuring repetitions of the same image, with slight differences between them. Another trade standard is the use of balance in visual displays to convey a sense of order, calm, or pleasure on the eye—three, or exponentials of it, is the prime number for decorative objects—in a glassware display, room setting, or, say, a gallery wall. It is exemplified in Triple Elvis [Ferus Type] (1963), seen here. Warhol would employ such strategies throughout his life. 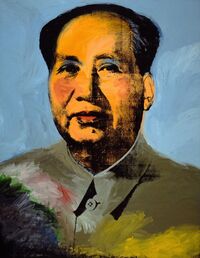 2 Images
View Slideshow
The opening moments of this exhibition focus on the tinkerings that would lead to Warhol’s later practice, though certainly early experiments were sometimes abandoned. Superman (1961) is painted in a comic-strip manner redolent of
Roy Lichtenstein
, and depicts the hero blasting out an enormous breath to extinguish a forest fire. It could be read as a colossal blow job; a
Pop
reaction by a gay, male artist toward the heteronormative, stifling masculinity of the
Abstract Expressionism
that was still dominant. Two paintings of soda bottles, Coca-Cola [2] (1961) and Coca-Cola [3] (1962), also read like tests; the former evinces a handmade painterliness, while the latter has a slicker form.
What followed from here in terms of Warhol’s own art was not the organic, maturation of an oeuvre, but rather a decision-making process, a series of moves calculated to achieve his interlocking personal and artistic ambitions: universality, accessibility, success, fame, even mythical status. Warhol understood the machinations by which his art—and the environment he constructed around him—could be commodified to topple distinctions between the domestic and the public; between exclusivity and egalitarianism, inclusion and exclusion. He mobilized the products and consequences of the American Dream—so rapidly expansive in the post-war period—from the glitter and beauty of Hollywood to mutilation, death, and disaster on the streets. He mechanized his art production to keep pace. The motifs of American life became his arsenal, from mundane grocery products to newspaper photographs. In his multiplying of them, he simultaneously deified and diminished them. 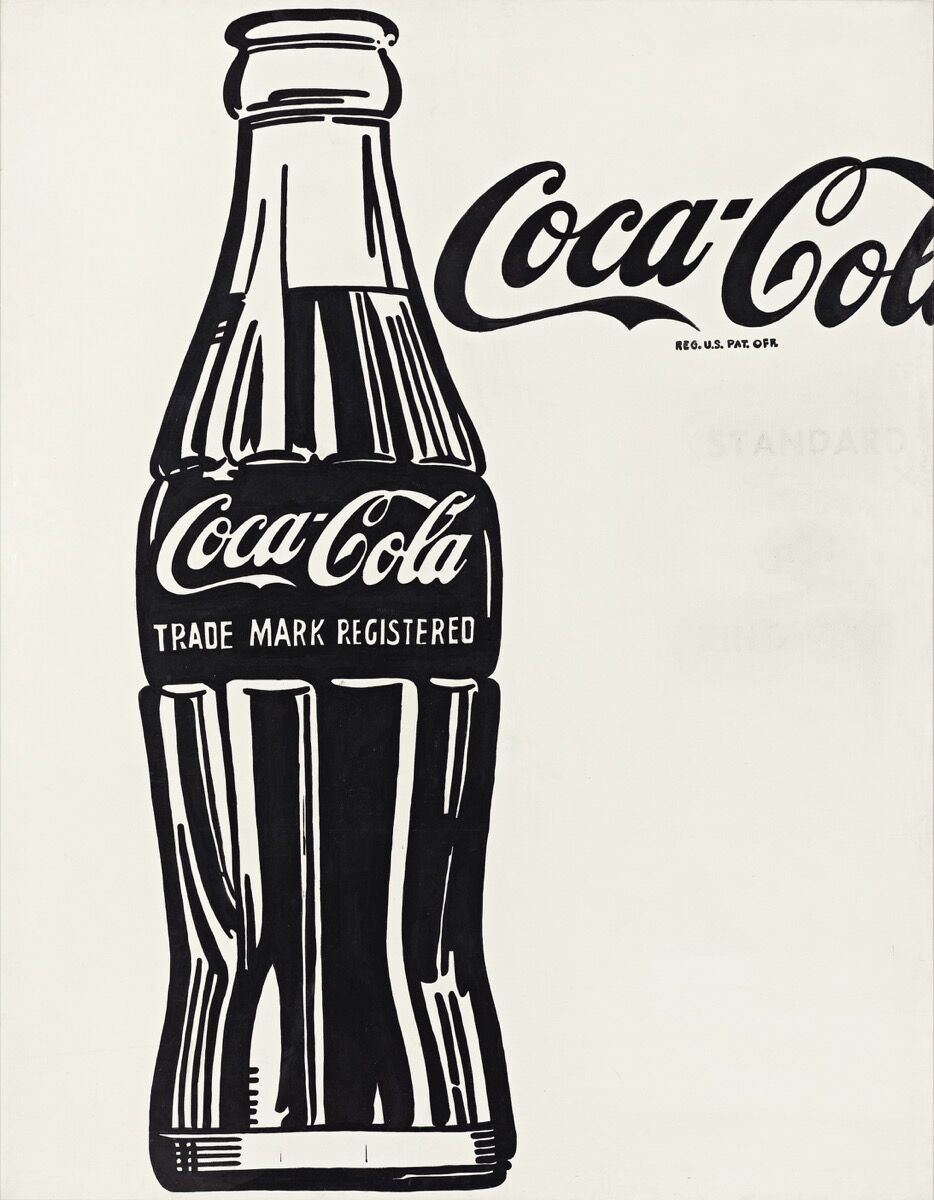 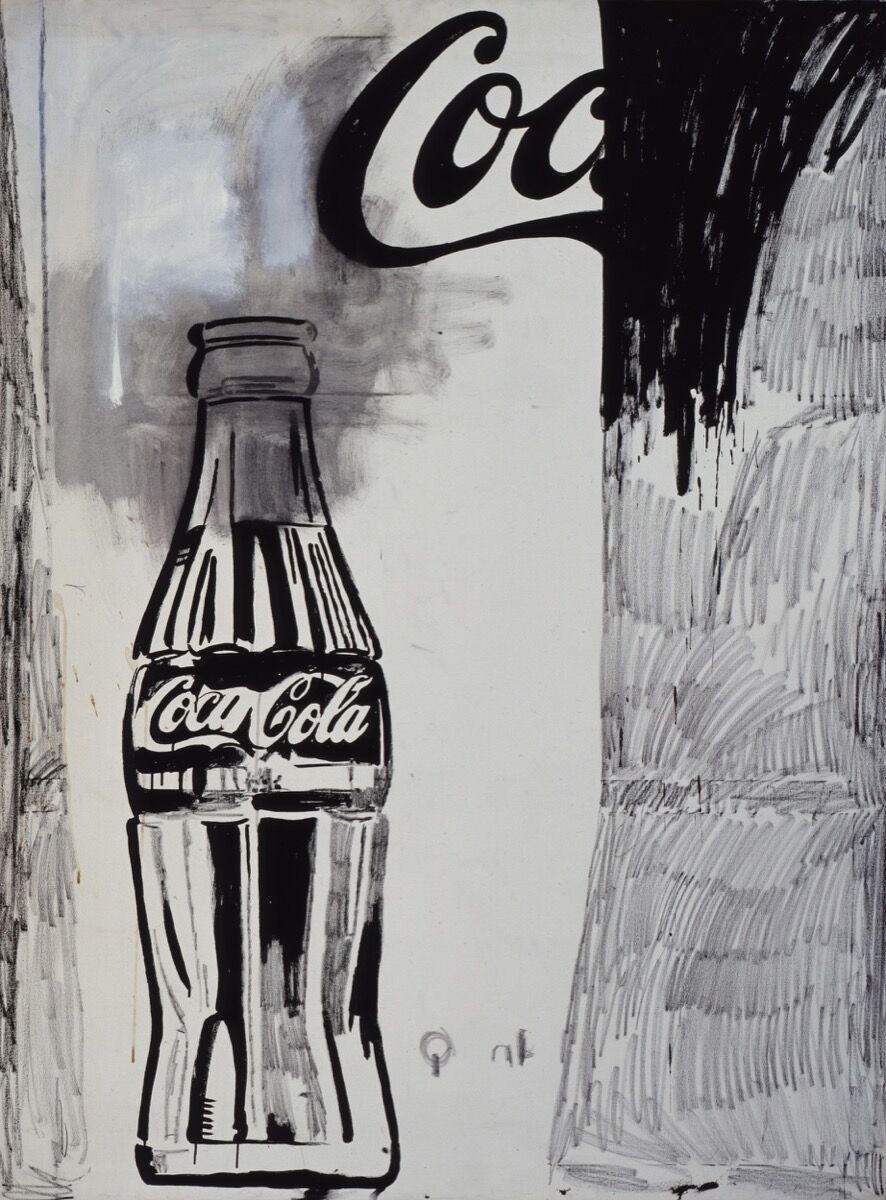 The last example in this show of Warhol’s hand-painted, mechanized-looking style is Before and After [4] (1962), which was based on a rhinoplasty advertisement, and shows a woman’s profile twice, preceding and following the surgery. (By then, the artist had undergone a similar procedure himself.) In the same year, Warhol moved to
silkscreening
as a mode of production, and the work that would establish him as a star in his own right. Subjects range from Marilyn Monroe, Elizabeth Taylor, and
Leonardo da Vinci
’s Mona Lisa (1503–19) to lurid pictures of suicides, gory crash victims, and the electric chair. Among these is a humbler, less familiar image: Crowd (1963) is taken from a 1955 United Press photograph wherein a horde of half a million people have gathered in St. Peter’s Square, awaiting the appearance of Pope Pius XII on Easter Sunday. The multitude is facing the camera, and many are looking directly at it. How much self-projection did Warhol intend by selecting such an adoring gaze?
The picture startles because for an artist so enamored of mass communication, of reaching huge numbers of people—extending to television, including his MTV show, Andy Warhol’s Fifteen Minutes, in the mid-1980s—it’s the only still image of a crowd in the exhibition. The inclusion of the modestly sized Crowd permits a marvelous contrast against much larger works focused on individuals, and perhaps reveals Warhol’s own compulsion for canonization. 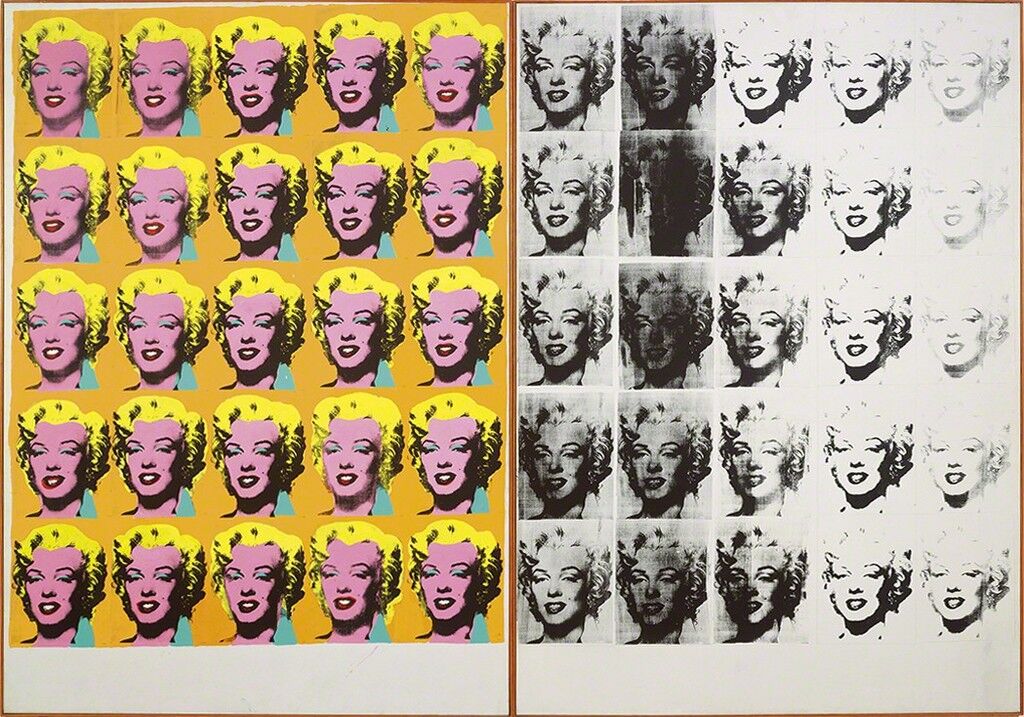 Andy Warhol
Marilyn Diptych, 1962
Whitney Museum of American Art
Elsewhere in the show are many defining works, including the 1964 series “Most Wanted Men”; an entire room featuring facsimile reproductions of the vivid Cow Wallpaper [Pink on Yellow] (1966); Mao Tse-Tung (1972), from his series of portraits of the Chinese leader; two large Rorschach paintings from 1984; and the luminous green Self-Portrait (1986). However, it is relatively unfamiliar works that are particularly absorbing. Mylar and Plexiglas Construction (ca. 1970) consists of a clear Plexiglas stand with three compartments that decrease in size from bottom to top, like a pyramid. They house six roles of mylar (three, two, and one, as the piece ascends). The totemic construction lends these industrial materials a faintly mystical air, while the irresistible colors—magenta, deep purple, rose pink—are nonetheless dormant, not yet part of the displays, signage, or backdrops they were originally intended for.
Similarly curious, towards the end of the exhibition is a small collage—Untitled (White Brick Wall) (1986)—which is stitched together from six photographs. The threading is subtle, but reveals its seams, and is loose at the edges. The sense is of a barrier compromised, yet still holding something unseen from the viewer. It gives the tantalizing hint that not everything that Warhol made was intended to fit within his great kaleidoscopic endeavor. 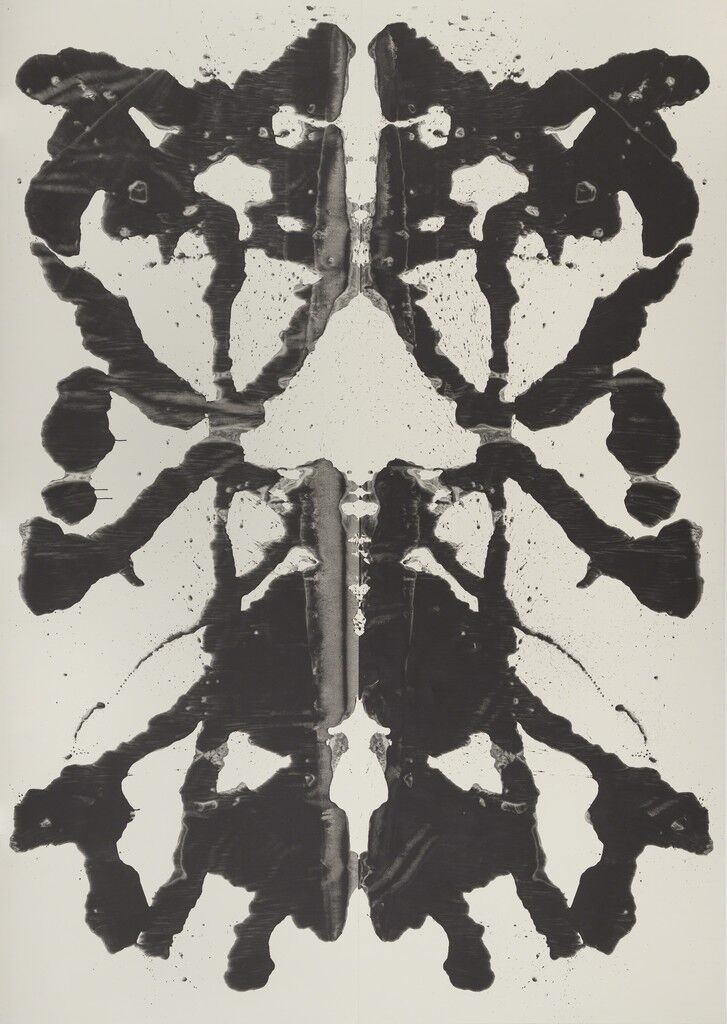 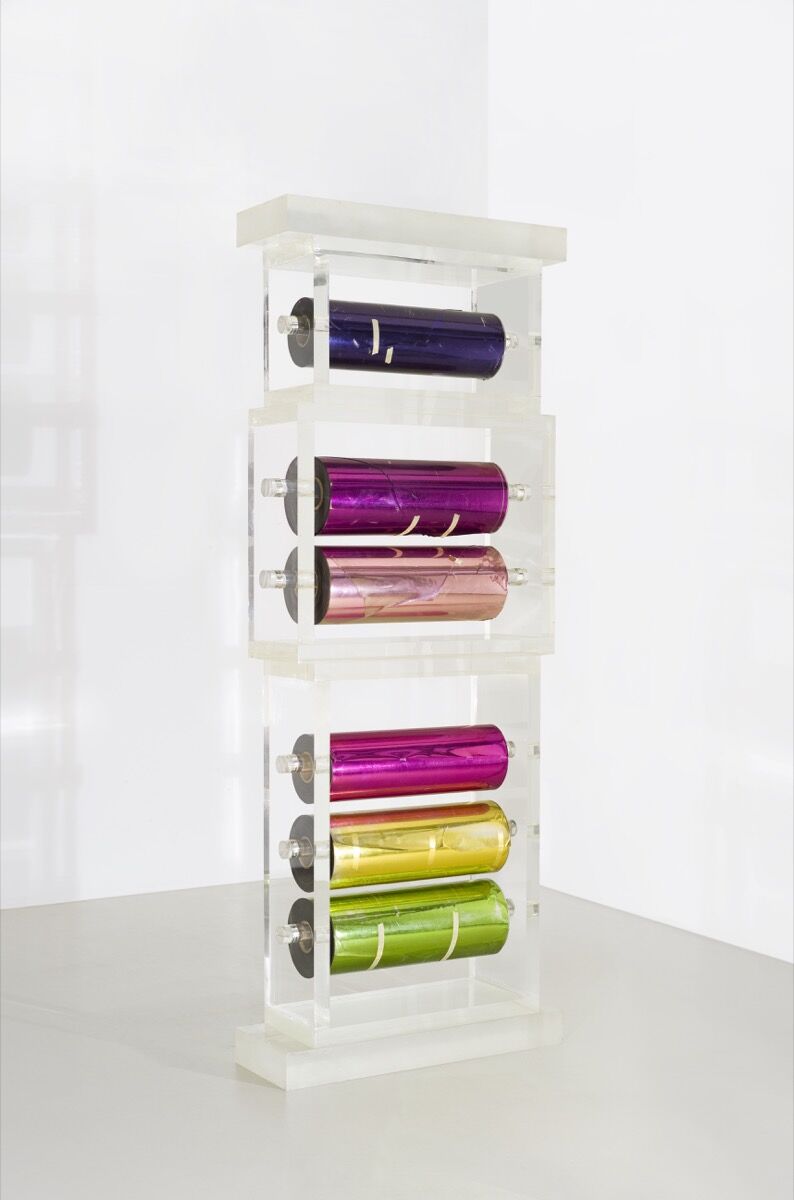 “From A to B and Back Again” encompasses Warhol’s vast output through books, film, drawings, magazines, recordings, portraiture, and more. It could be an overwhelming experience were it not for the contextual roadmap provided by his earliest work from the 1950s. Overall, the show does answer the question of why Warhol is an important part of 21st-century discourse. The artist remains pertinent because, through his appetite for consumption and dissemination, he became the information, the culture, and the machinery that so fascinated him, and which everyone now increasingly trades in on a daily basis.
Warhol perceived, predicted, and promoted the collapsing into oneness of every aspect of American life—crime, commerce, stardom, technology, domesticity, trauma, and politics. He has been necessarily superseded by his descendants—reality television, social media—and their avatars: the Kardashians, YouTube personalities, even the current president of the United States. While the ancestry of this frenzied condition can be traced back to him, one wonders if Warhol would find the current state of his project gratifying.
Darren Jones
Related Stories

The Camp Aesthetic Is Everywhere, from Andy Warhol to American Politics 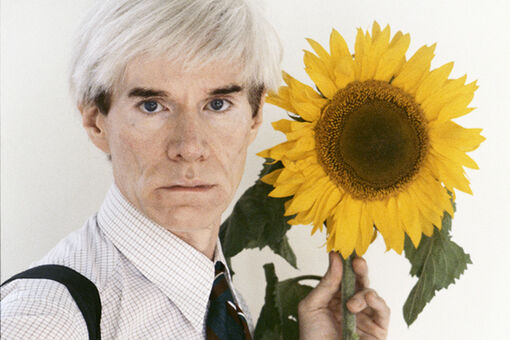 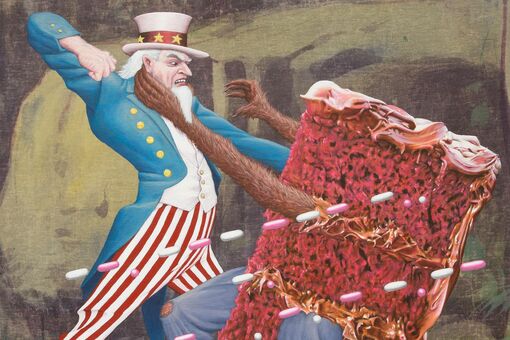 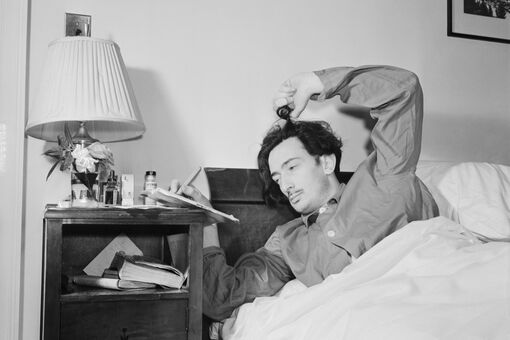