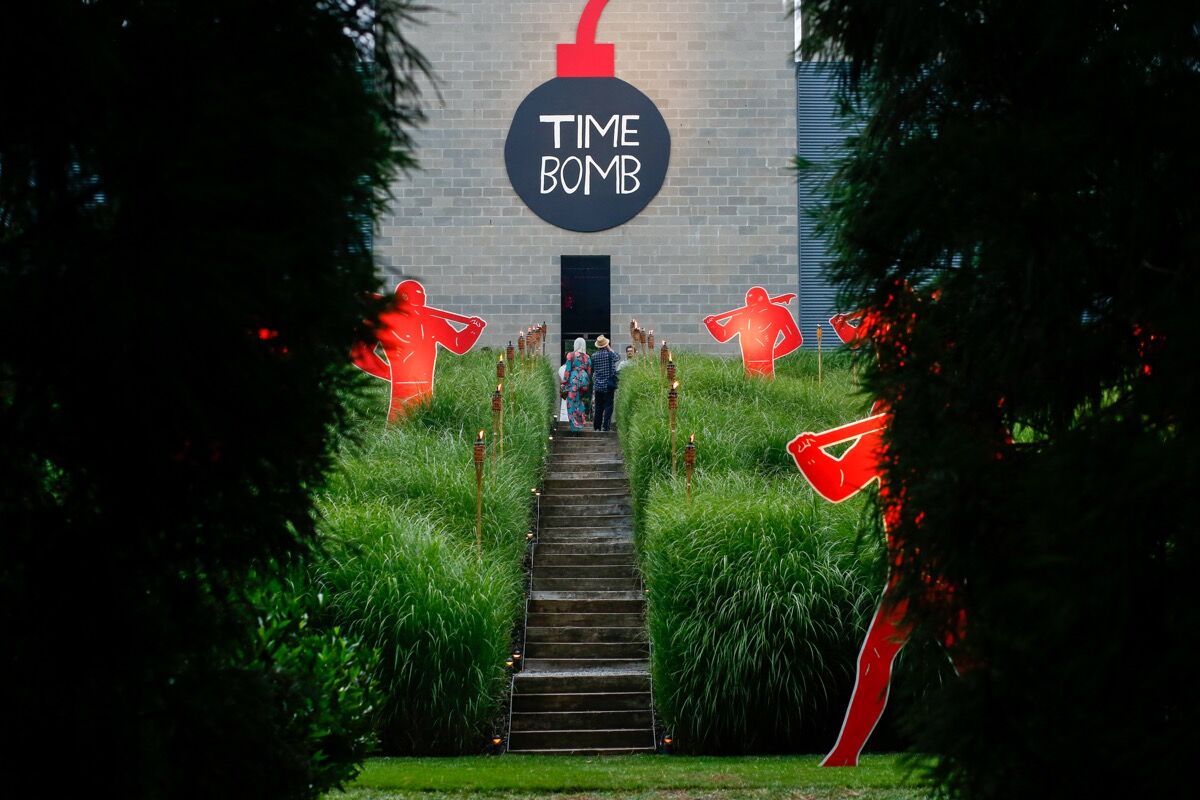 The Hamptons was once a modest artist haven, with
Willem de Kooning
,
Jackson Pollock
, and others seeking refuge from New York City—instead opting for light reflecting off of inlets and bays, and cheap, ramshackle houses that could be converted into studio space. But, as anyone who has gone out east for a weekend this year quickly figures out, the Hamptons has become less of a creative community, and more a place where political candidates court wealthy donors, hedge-fund managers throw debauched house parties that destroy $20 million homes, and the wealthy residents chair a stream of charity galas.
5 Images
View Slideshow 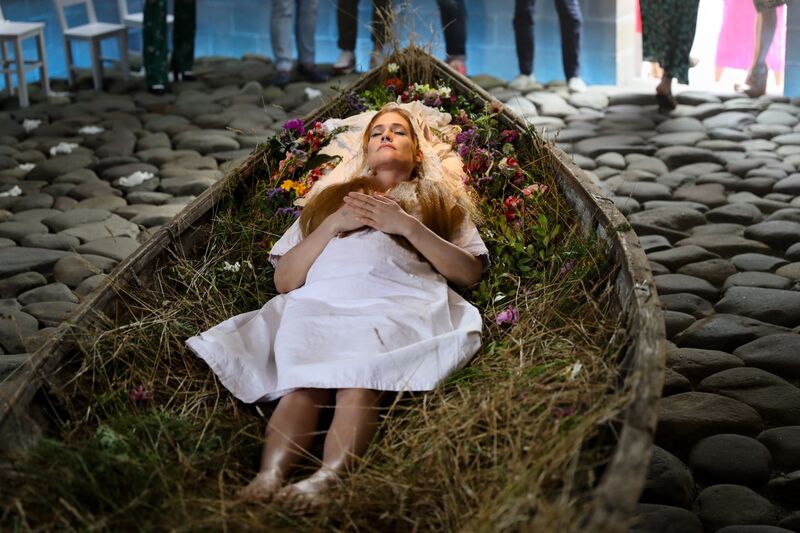 At least one of those Hamptons charity galas is still something of an artwork itself. Each year, The Watermill Center—a training ground for young artists-in-residence and an exhibition space—hosts a benefit dinner on its 10-acre campus in the wooded hamlet from which it got its name. It keeps the flame of the first artist-settlers in the Hamptons alive by treating the elite guests to dozens of installations and performances scattered through the forests. Last Saturday was the 25th annual gala, and the silver anniversary brought out 1,000 visitors—and raised $2.2 million for the institution—as attendees snaked through the expansive space, discovering work more outré than the last.
Guests entered to see the logo for the benefit’s title, “Time Bomb,” designed by
Christopher Knowles
—the artist who was discovered by Watermill founder
Robert Wilson
when he was 14 years old, and was soon helping the artist and avant-garde theater legend with productions such as 1976’s Einstein on the Beach. 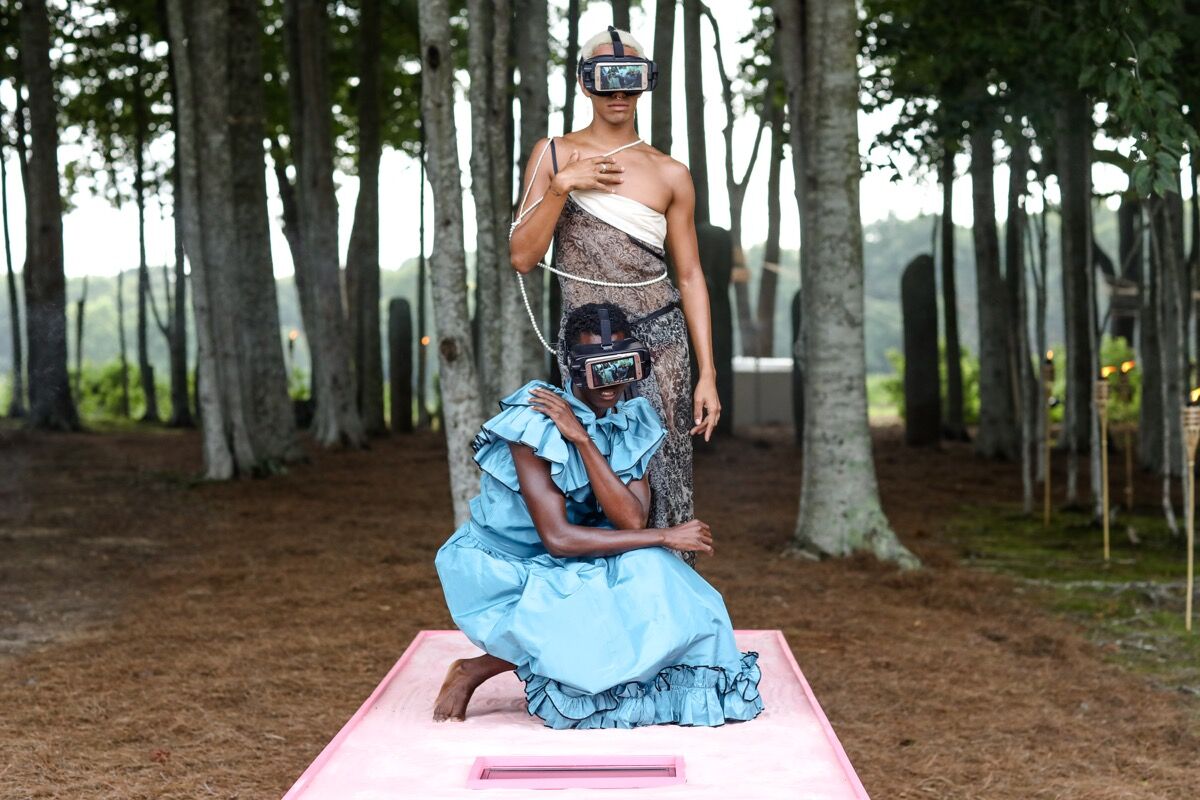 Advertisement
Then, visitors ducked into the first of the performances to find freak folk band CocoRosie performing a work called Lying Awake: Our Lady of the Flowers (2018) in a room where the ground was covered by large round stones, which visitors in heels were forced to walk warily over. Looking up, they saw a horn section playing on a balcony; to their sides, a chorus of women in white makeup stretched their bodies in an undulating free-form dance while men sat on row boats placed atop the stones.
In an adjacent room,
Dawn Kasper
’s new installation Watermill Cluster (2018) featured a wave of contiguous drum cymbals, amplified via microphones to create a wave of reverberations in the room. Above the cymbals, banners from the project “Word on the Street” displayed work by artists such as
Laurie Anderson
,
Jenny Holzer
,
Carrie Mae Weems
, and
Wangechi Mutu
, with slogans such as “FOLLOW THE MONEY” and “DON’T BE AFRAID OF ANYONE.” 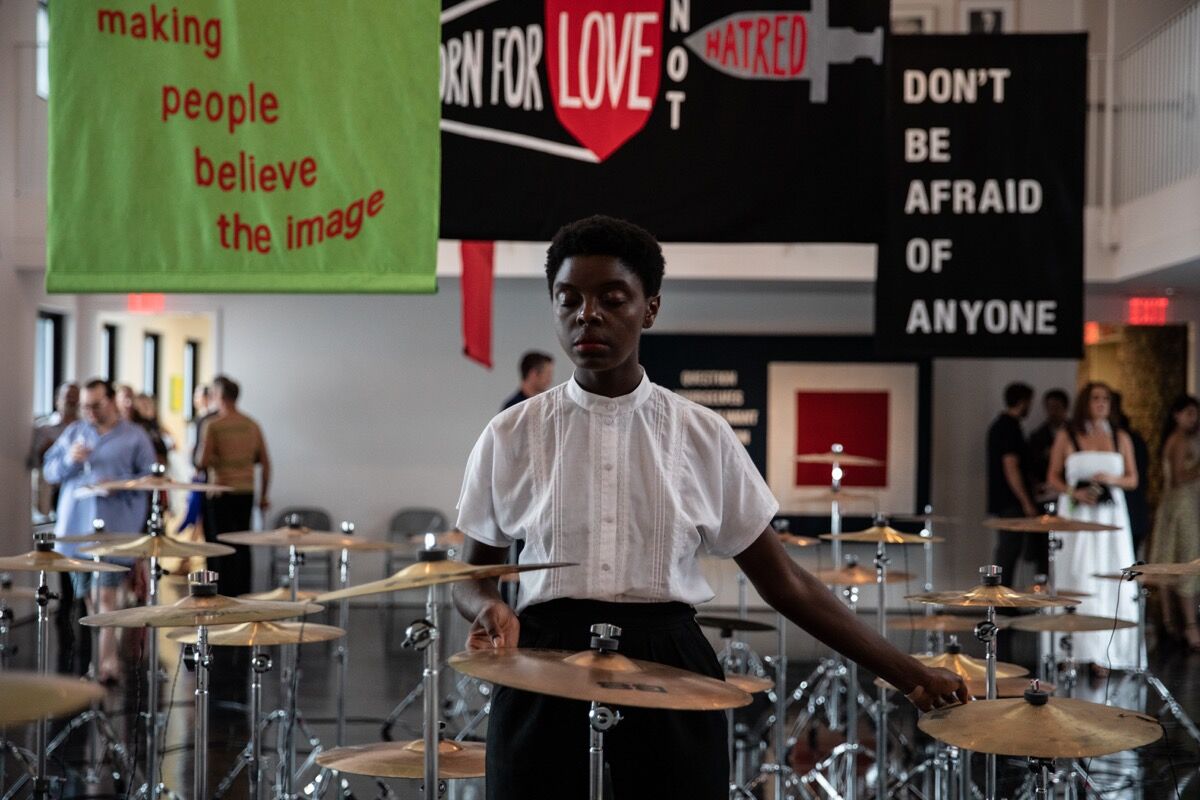 Walking outside into a clearing pavilion, guests encountered perhaps the most striking and timely of the works.
Stephen Shanabrook
’s Assaulted Landscape with Splattered Rivers and No Place to Hide (2018) was a performance in which a paintball gunman—in this case, the artist—stood enclosed inside of a small, semi-opaque circle made of glass, splattering its walls with different colors. Guests who stood close enough could be hit by the gelatin shrapnel of spent balls.
3 Images
View Slideshow 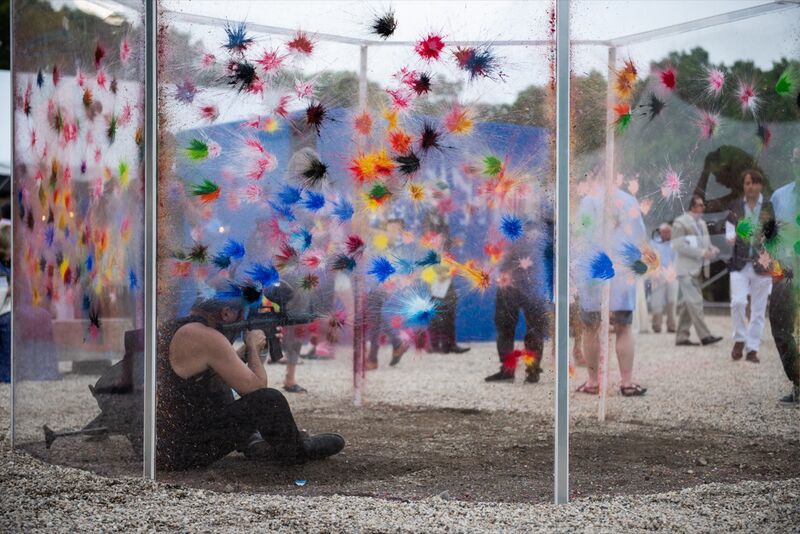 Back in the woods, Israeli artist
Naama Tsabar
hunched over a Frankenstein instrument constructed by fusing two guitars into one, both attached at their backsides, string-side out. Once her performance began—situated in the middle of a white triangle drawn in the mulch—Tsabar began shaking the double-sided guitar to make it scream among the trees.
Nearby was Tassy Thompson’s Lys Klår—involving two strapping men in skimpy tunics suspended suggestively by ropes—and, perhaps the most perplexing, Jorg Brinkmann’s The Broad Gave Me My Face But I Can Pick My Own Nose. Men in neon-green bodysuits danced on platforms, holding up MacBooks as faces of the famous—Sir Elton John, Mr. T, and, inevitably, President Donald J. Trump—flashed across the screens. 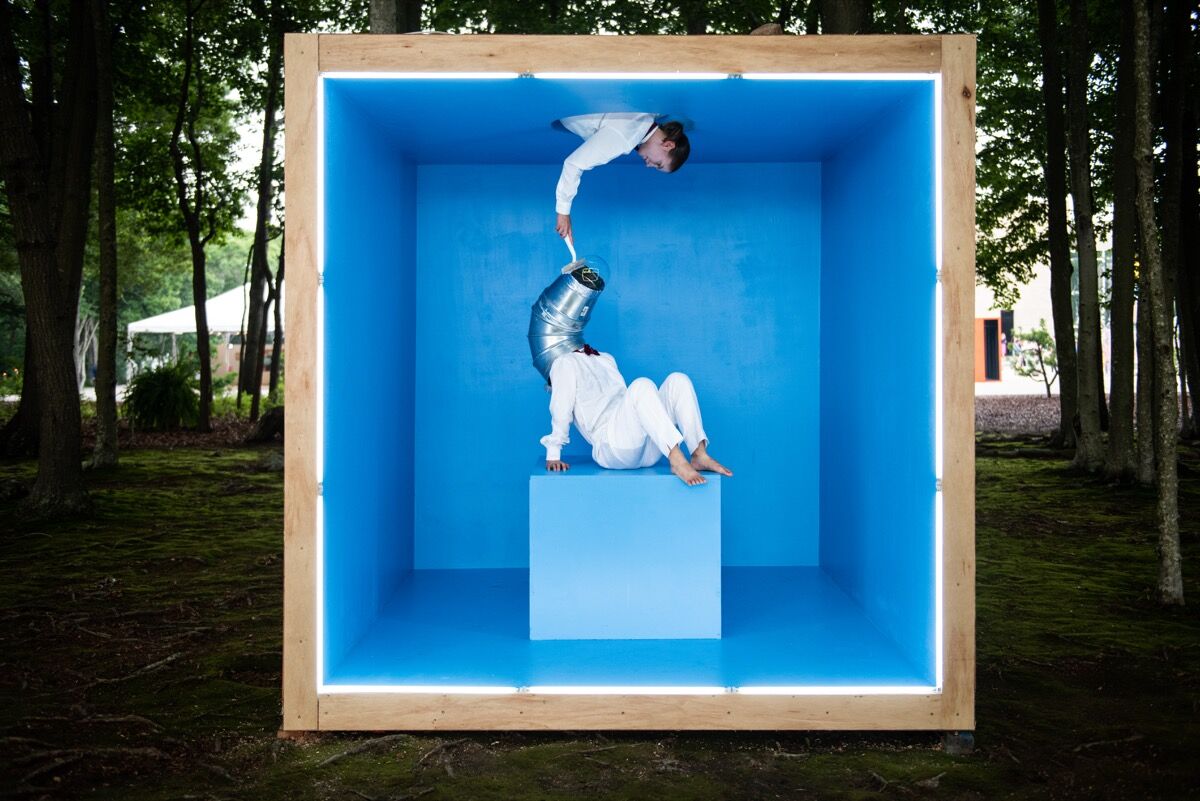 As the cocktail hour moved to dinner, Wilson gave a speech about the night’s honoree, Pierre Berge, a French industrialist who, until his death, had built up a magnificent collection of art alongside his late partner
Yves Saint Laurent
. Wilson began the speech with a performance, waving at a woman who held up her phone for a picture, imploring her to listen to his words, and then launched into a series of bird calls of oscillating pitch. He recited something akin to a tone poem for the honoree, calling Berge “a statesman, a Scorpio,” and mentioned that he was the first person to contribute to The Watermill Center.
“This is my song for him, a citizen of the world, for his loyalty and generosity to his friends,” Wilson said. 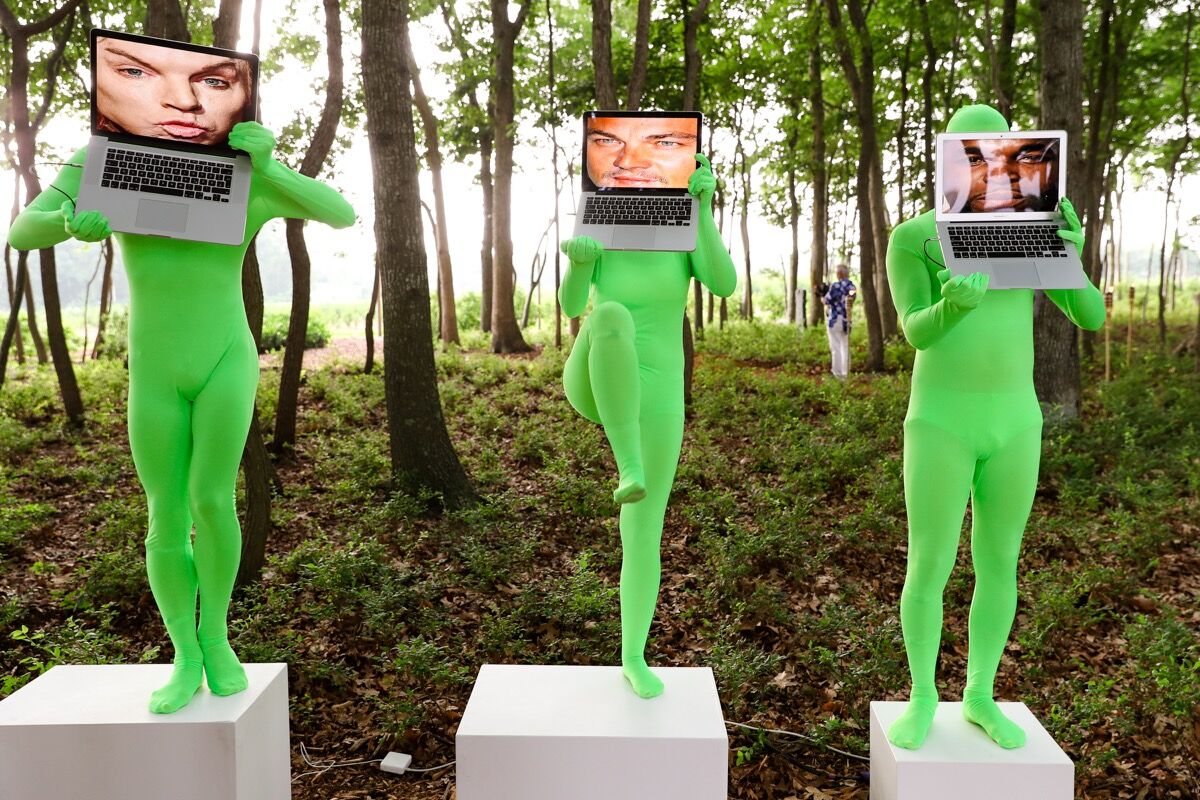 Jörg Brinkmann, The  Broad  Gave  Me  My  Face  But  I  Can  Pick  My  Own  Nose, at the Watermill Center. Photo by Neil Rasmus. Courtesy of BFA.

Even the charity auction imitated performance art. Gavel wielder Simon de Pury came to the center of the tables and announced that
Marina Abramović
herself would offer to the highest bidder a new item for the benefit auction, a one-time-only performance that could not be recorded by any electronic devices. There could be no talking during the performance, nor any clock faces present.
Abramović explained the auction prize: “As I work with my body, I was like, let’s donate—well, not exactly donate my body, but donate dinner with my body.” The dinner could involve the winning bidder and 10 friends. Art handlers walked around, holding up a gigantic, photographic self-portrait of Abramović, also for sale, so her visage hovered around the stage. In the three days before the dinner performance, the artist instructed that attendees could not have sex, could not watch television, and could not talk about Donald Trump. 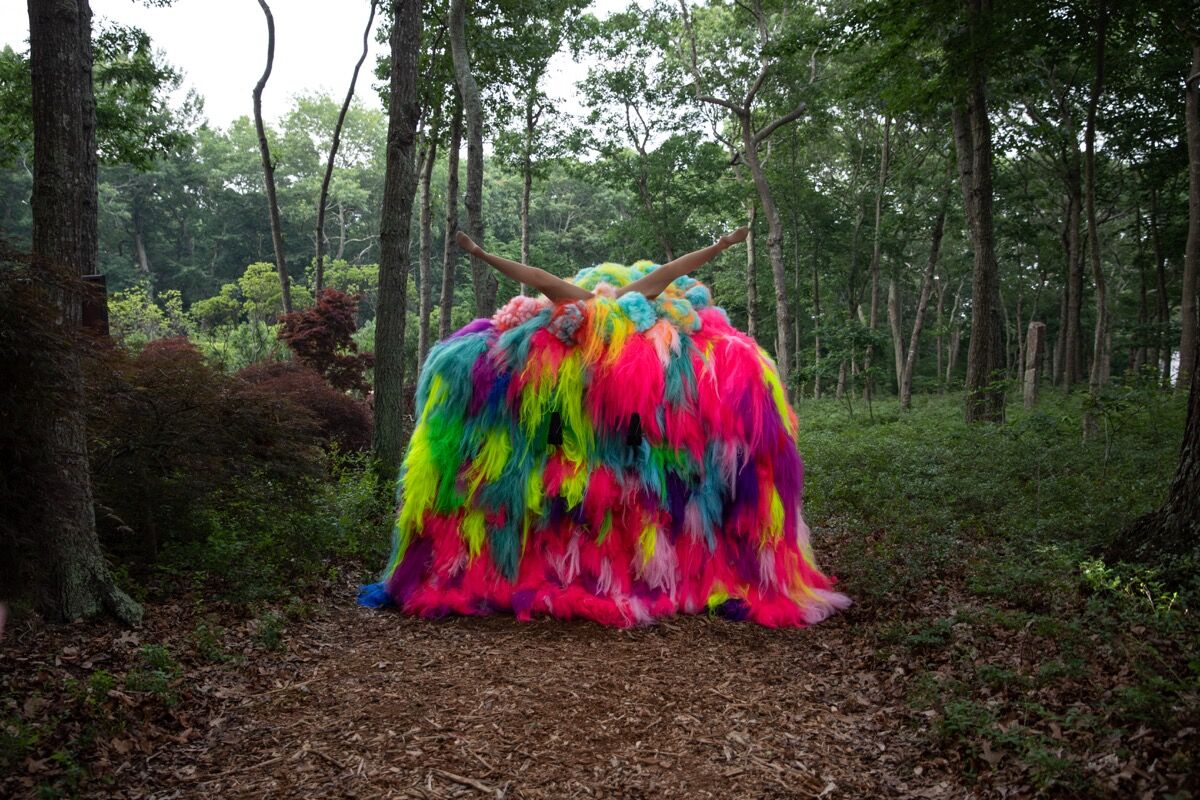 Perhaps such an offer would have tripped up the crowd at a different charity gala. But at the Watermill benefit—a gala that is, in many ways, an extended performance—the paddles went flying, and the bidding soon shot up past $30,000.
Nate Freeman
Related Stories