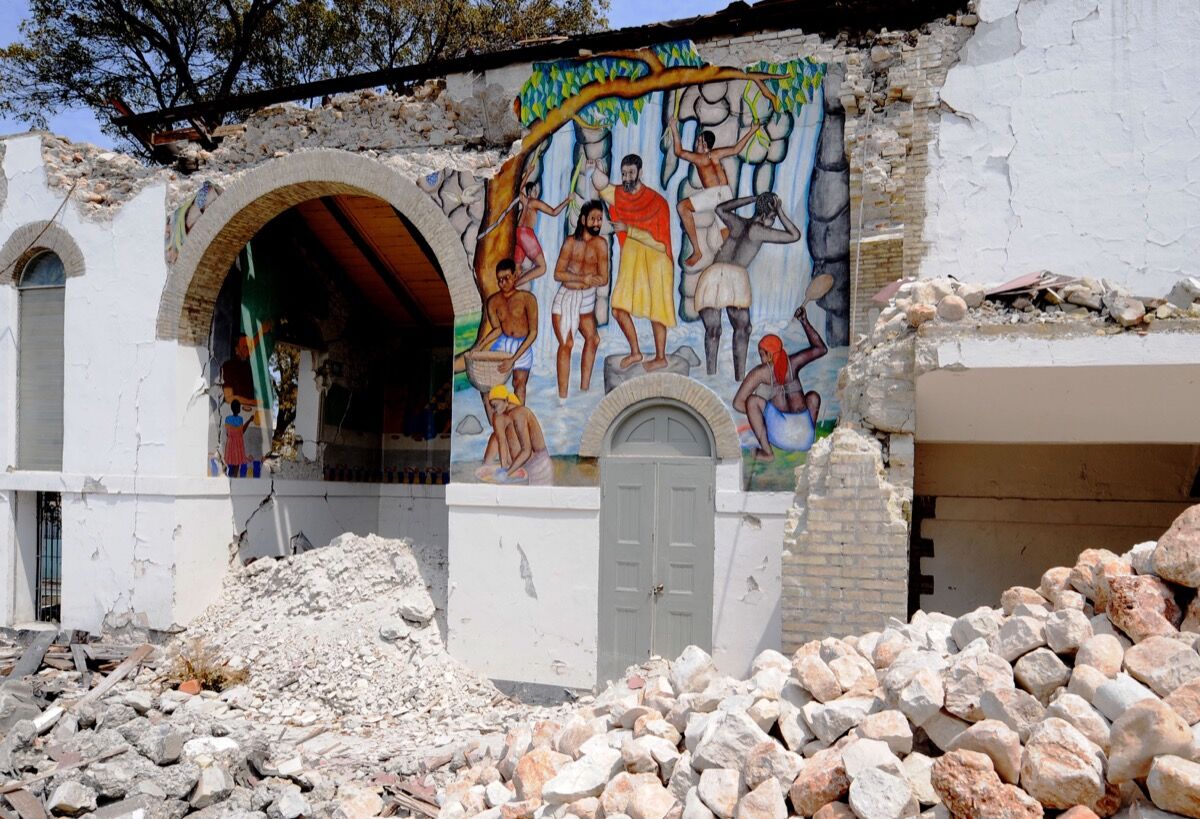 In 1861, an African-American bishop named James Theodore Holly gathered some 110 of his fellow countrymen and set sail from New Haven, Connecticut, bound for Haiti. A staunch abolitionist, Holly believed that the small island nation offered the potential for a life free from slavery and servitude. Once there, Holly founded a church, the Holy Trinity Cathedral. Like Haiti itself, the church proved resilient: It burned down and was rebuilt—twice. From 1949 to 1951, local artists painted 14 murals on its walls, powerfully symbolizing and asserting the country’s identity and history by blending traditional Christian imagery with Haitian figures and cultural symbols.
On January 12, 2010, nearly 150 years after Holly left America, a magnitude 7.0 earthquake hit Haiti. Death toll estimates range from 220,000 to 316,000 people. Injuries have been placed in the 300,000 range. 1.5 million people were displaced. But art, artifacts, and archives were also amid the rubble. When the earth’s shaking subsided, only three of the Holy Trinity Murals remained, and the walls that held them were barely standing.
Across the globe, natural disasters threaten not only individual people but the tangible art and artifacts that store our shared sense of identity and history. From Kathmandu to Lower Manhattan, organizations and individuals are drawing on 21st-century engineering and local expertise to safeguard the world’s heritage, which in the aftermath of calamity provides the resilience necessary to rebuild.

A number of Haitian conservators sprang into action just 24 hours after the earthquake. Stories abound of Haitians, finding solace in their shared history, singing through the first night of the disaster, afraid to re-enter their crumbling homes. In a school attached to the Holy Trinity Church some 250 students were killed. But following the natural disaster residents risked life and limb to get instruments out of the building and to safety so that they could be played again one day.
Still, Haiti is not a wealthy nation, and a global effort seemed necessary if repositories of national identity, like Holy Trinity, were to be preserved and salvaged. In March, Corine Wegener arrived on the island, part of the Smithsonian-led Haiti Cultural Recovery Project. “The first impression was just how incredibly devastated the city of Port-au-Prince was,” she says. “But the other impression was how important to Haitians their cultural heritage was, even amid the disaster of that earthquake.” Wegener, who founded the U.S. Committee of the Blue Shield, an international NGO that works to help protect cultural property during manmade and natural disasters, had been invited to participate in the Haitian project by Richard Kurin, the Smithsonian’s Under Secretary for History, Art, and Culture. Kurin, frustrated by bureaucratic intransigence, worked with Wegener and others, embarking on an impressive and successful endeavor to get the cultural recovery project off the ground, securing funding, and getting Haitian and American governmental approval.
Over the course of project’s 18-month lifespan roughly 4,500 paintings, 3,500 artifacts and sculptures, 17,000 rare books, and 500 works on paper received treatment and caretaking. Those figures include a painstaking restoration process of the three surviving murals at the Holy Trinity Cathedral. First, walls in danger of collapsing were stabilized until the murals could be removed and restored. Of equal significance to the impressive totals of objects saved was the training of roughly 150 Haitians in cultural preservation and restoration—a vital transfer of skills to a local population best positioned to help should another earthquake or hurricane strike. 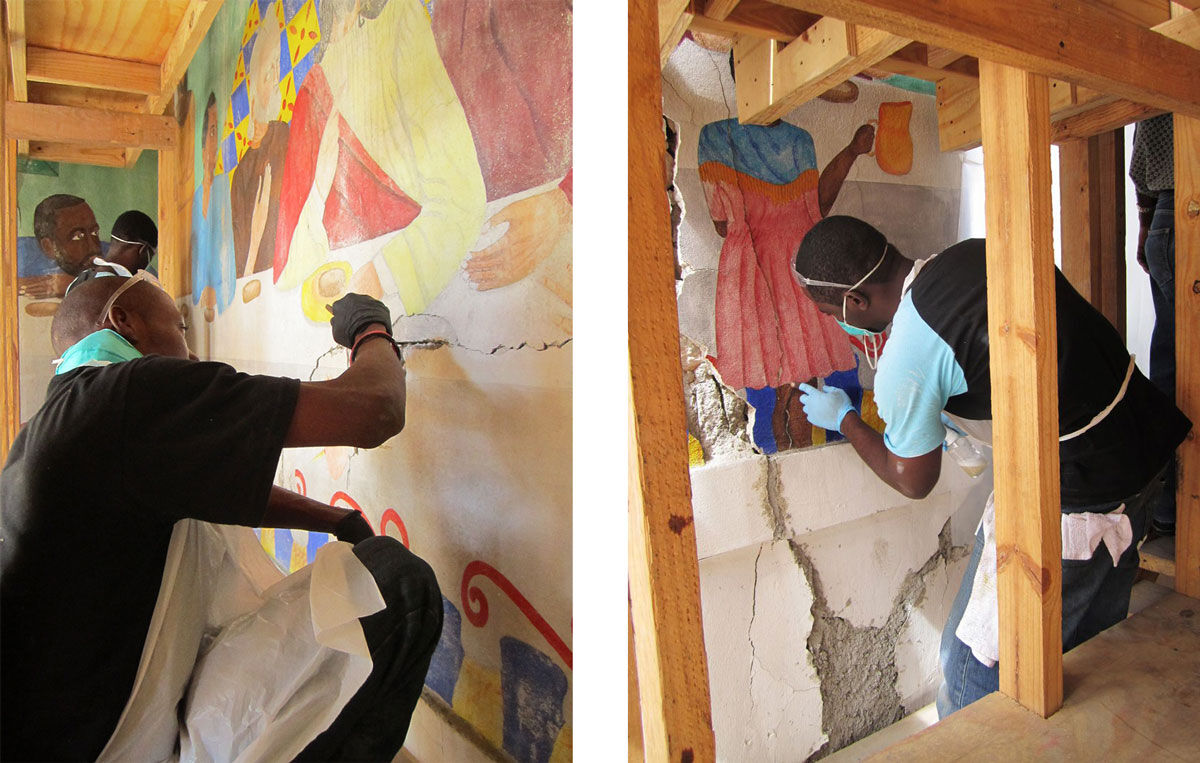 Restoration of murals in Haiti. Photos by Stephanie Hornbeck, courtesy of the Smithsonian.

For some, this kind of effort and expenditure of resources in the aftermath of an earthquake may seem misguided. “I have only ever heard Americans say ‘I can’t believe you worry about cultural heritage in the aftermath of a disaster,’” says Wegener, now the Cultural Heritage Preservation Officer at the Smithsonian. In crucial ways, Wegener argues, that disbelief misunderstands both the significance of the history being rescued and the way in which such heritage preservation efforts actually occur. Once our personal safety is ensured, we would all want our individual repositories of memory and family, be they photo albums or heirlooms, saved from a house fire or flood. “Why do you think a community would think any differently about their heritage?” Wegener asks.
These shared cultural items provide a set of  “common memories, a sense of identity, a sense of confidence and hope in the future” in the aftermath of a natural disaster, says Giovanni Boccardi, chief of UNESCO’s emergency preparedness and response unit. And while local efforts to salvage heritage can begin quickly, paintings don’t take priority over people, nor do they detract resources from humanitarian relief. As for the international projects like the one championed by the Smithsonian in Haiti, “we’re not there on the ground in the golden hours, but we hope to be there in the golden weeks, after the humanitarian response is taken care of but before things start to deteriorate really badly,” says Wegener.

Nations with relatively well-tested natural disaster preparedness and resources can deploy their expertise quickly. A 6.2 magnitude earthquake tore through Amatrice, Italy, last month, killing roughly 296 people in the region. Days later, the hands on the small town’s central clock tower still read 3:36 AM, the exact moment that the quake hit. The clock broke and much of the town crumbled. But the 16th-century tower withstood the tremors. “Only that tower remains,” one Amatrice resident told the Washington Post, “which means that if she was left standing, we can make it, too. If she falls, I don’t know.”
Rescue and relief efforts began in the aftermath, and focused first on providing aid to those trapped or injured by the destruction. But within hours, a crisis unit within the nation’s Culture Ministry started to sift through the rubble, salvaging archives and works of art. This was not the first time the repositories of Italy’s rich past proved vulnerable to natural disasters. In 1997, a series of quakes with magnitudes between 5.0 and 6.0 rippled across the country’s central region, killing 11 and gravely damaging, among other works of art and architecture, several murals by
Cimabue
and the school of
Giotto
in the town of Assisi. The destruction prompted the Italian government to establish a unit within the Culture Ministry to salvage heritage in peril.
And after the Amatrice quake, members of that unit arrived as first responders wrapped up initial efforts to look for survivors. But almost two decades after the quakes in Italy’s central region, questions remain about why Italy’s infrastructure remains so poorly prepared to brace the impact of the two fault lines that run beneath the country. Roughly 70% of Italy’s buildings are not up to seismic code. And concern still swirls around those that are: One school that collapsed in Amatrice was ostensibly brought up to these seismic standards in 2012, at a cost of $785,000. 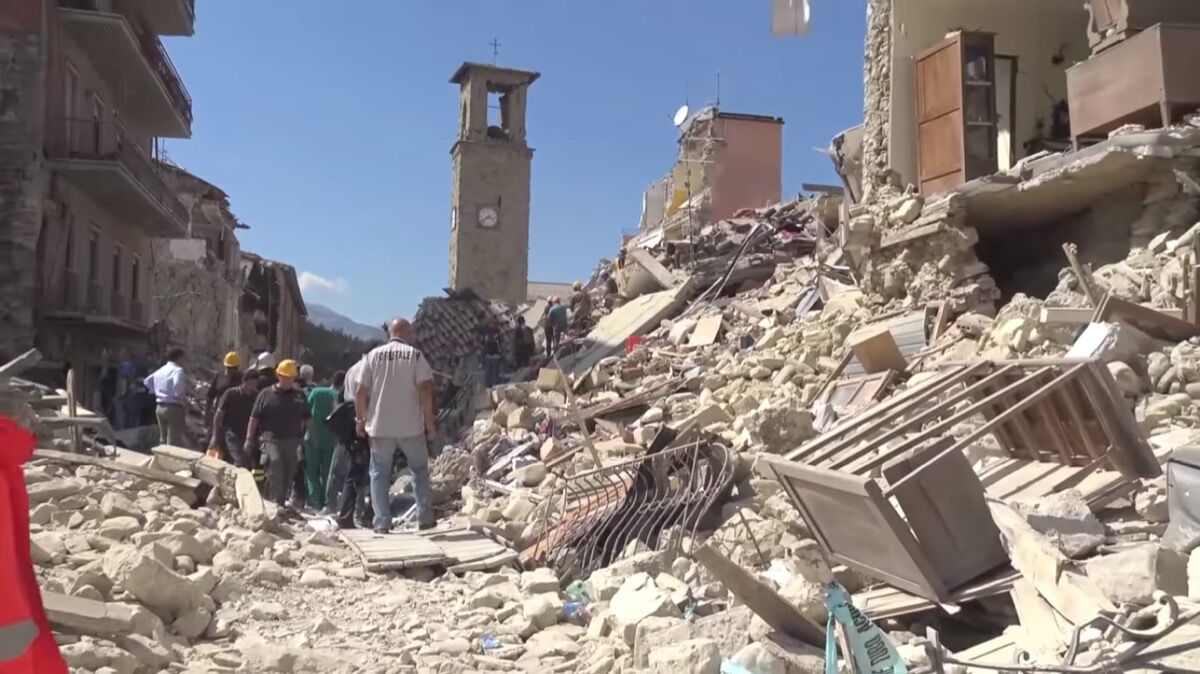 Advertisement
Investigations into this case and others have begun. But the track record around what happens next in a nation notorious for corruption and delays is dubious. “Typically in Italy, events such as the 2016 Amatrice earthquake do not lead to a sustained government response, for there are too many other demands upon the public purse,” wrote UCL professor David Alexander, who specializes in natural disaster risk, impact, and response. But compared to Haiti, Italy has a knowledge base and wealth of resources—along with EU support—that it can deploy now and going forward.

The skills and time put into Haiti did, however, prove valuable when a 7.8 magnitude earthquake struck Nepal in April 2015. “We did similar first aid training,” says Wegener, who went to assist with the efforts in the country as part of an international effort. Christian Manhart, the head of the UNESCO office in the country, describes the monuments in the Kathmandu Valley as “heavily affected.” Manhart says that 743 historic monuments suffered damage, with roughly 18% percent collapsing entirely. UNESCO is currently engaged with numerous international partners on several projects in the country, working to establish databases and conduct the studies and research necessary to adequately protect heritage moving forward.
One challenge is that “the government is tendering the restoration to the lowest bidder,” Manhart says. It’s a policy UNESCO protests since it “does not ensure the best quality of work.” Financial strains and shortcuts aren’t unique to the country, however. “In Nepal and in Haiti, too, the whole question of how you do reconstruction and who gets the contracts and how this international money is spent is always controversial,” whether those contracts are for preserving cultural heritage or building new homes for affected families, says Wegener.
Along with repairing damage done, UNESCO has 1,052 world heritage sites to safeguard and protect from manmade and natural hazards. The two are usually connected, with sites facing a combination of hazards. Poor human planning can mean that an expected natural event, like an earthquake occurring along a fault line, poses far more of a hazard than it should.
A key challenge to cultural heritage sites is that they have historically been excluded from broader preparedness measures for natural disasters. This is one issue the Sendai Framework for Disaster Risk Reduction could potentially tackle. Approved by the UN General Assembly last year, the framework “is the most important international policy document on the topic of disaster risks from now to 2030,” Boccardi says, crediting extensive lobbying efforts that ensured heritage has been included in the document meant to provide broad guidance. Along with laying out best practices, it is a non-binding attempt to get the 193 signatory nations to “to use the same vocabulary, to have the same goals” when it comes to risk reduction, says Wegener.
Indeed, for all the importance of saving heritage after a earthquake or hurricane, dedicating adequate resources to brace for one is the best way to ensure culture and identity aren’t threatened, especially as the number of natural disasters increases, as it has due to climate change. “Preparation starts with knowing the risks that affect your sites and museums,” says Boccardi. “So the first thing is, of course, conducting a multi-hazard analysis of the risks, developing the specific scenarios that might develop at your individual site, and then of course starting to make plans for how to mitigate these risks.” 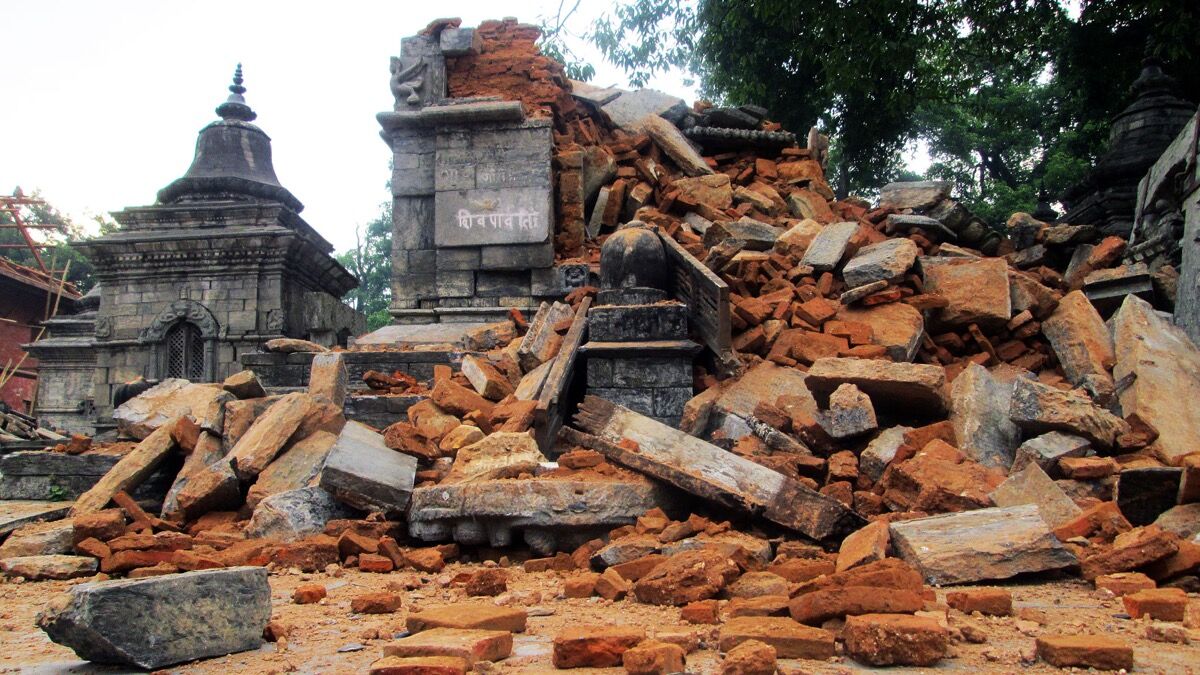 The destruction of Dewal at Pashupatinath Temple Area during the 2015 earthquake in Nepal. Photo by Nabin K. Sapkota, via Wikimedia Commons.

One doesn’t need to look to the natural disasters in Haiti, Nepal, or Italy for examples. Rather, a prime instance occurred in the heart of New York City, when Hurricane Sandy flooded the lower Manhattan construction site of the new Whitney building in 2012. The museum’s COO, John Stanley, calls the event an “eye-opener.” Though the museum is located a few hundred feet from the Hudson River, the threat posed by storms was greater than what had initially been determined by FEMA flood maps. In response, the museum worked to “retrofit, redesign, and reengineer aspects of the building to withstand a future Sandy,” says Stanley. Along with mobile flood barriers and precautions like storing their art 60 feet above sea level, the museum routinely conducts drills and other preparation measures.
As climate change increases natural disasters, modern buildings, when improperly engineered, can actually be in greater danger. In many cases, “vernacular houses built in traditional techniques have stood better in the face of earthquakes or typhoons compared to so-called modern buildings which were built in reinforced concrete but not supervised by engineers and not properly constructed,” says Boccardi. The mangrove forests in West Bengal and Bangladesh—a world heritage site—mitigate flooding and reduced the impact of the devastating 2004 tsunami. As individuals and organizations look to preserve the art, architecture, and artifacts that provide people across the globe a sense of identity, the key can sometimes lie in the heritage sites themselves.
Isaac Kaplan is an Associate Editor at Artsy.
Related Stories