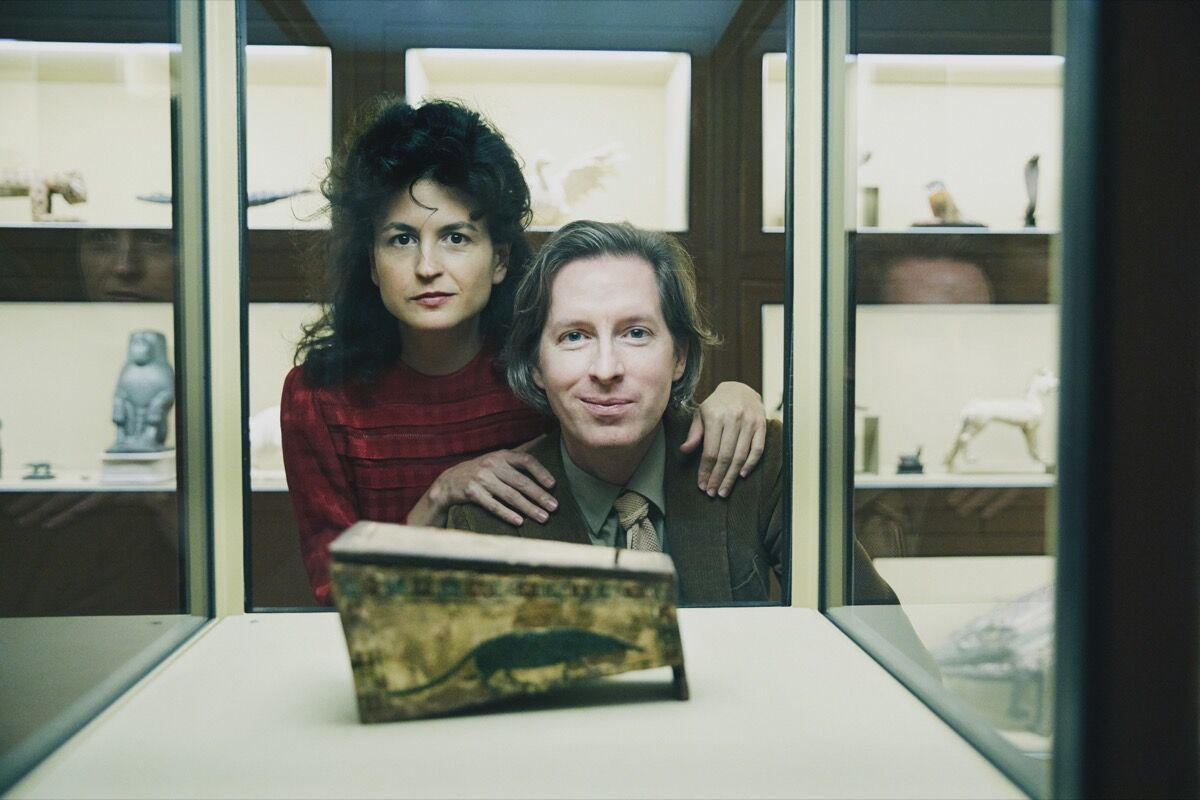 It’s like a benevolent father giving the keys to the heirloom Lamborghini to an unconventional son and his smart girlfriend. Deep trust is involved, but also risk. You never know what might happen.
The situation behind “Spitzmaus Mummy in a Coffin and Other Treasures,” an exhibition opening today at the grand Kunsthistorisches Museum in Vienna, isn’t so far off the above scenario. Celebrated filmmaker Wes Anderson and his partner, the writer and illustrator Juman Malouf, were asked to take a metaphorical joyride through the history of art, craft, natural wonders, and other discoveries. They’ve created a show with pieces culled entirely from the museum’s 14 collections and several outside ones, like that of the natural history museum across the way.
The result is a small, densely packed exhibition elegantly tucked into a part of the Kunstkammer—a portion of the museum dedicated to the objects that Habsburg emperors and archdukes collected, encyclopedically, from the
Middle Ages
to the
Baroque
periods. Vitrines and walls are packed with often-unsung and long-hidden-in-storage pieces from the museum’s overall holdings—composed of altogether more than 4 million objects spanning 5,000 years. Anderson and Malouf selected the 430 objects on view, ranging from weapons, paintings, and household objects in luxury materials to intricate decorative objects in wood and porcelain, taxidermied animals, and emu eggs (large bluish orbs laid six weeks ago on a farm in neighboring Lower Austria). More than 350 of the works were taken from storage, and several have never been shown to the public. 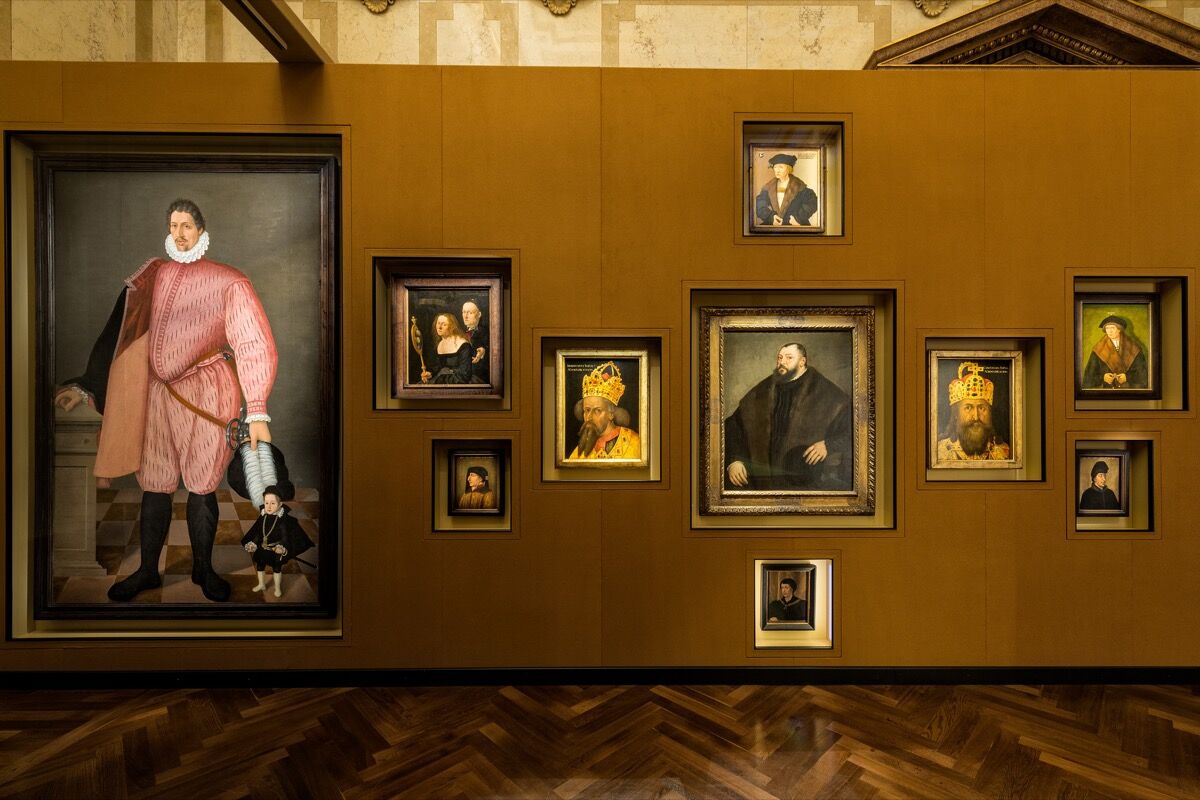 The thrill of not knowing what might happen is, in fact, the point of having an artist curate from a museum collection, and here, it’s part of an ongoing exhibition series. British curator Jasper Sharp, adjunct curator for modern and contemporary art at the Kunsthistorisches, came up with the idea of mounting artist-curated shows in Vienna after finding documentation in a New York bookstore of an exhibition called “Raid the Icebox 1 with Andy Warhol,” which
Andy Warhol
curated in 1969. And in general, Kunsthistorisches director Sabine Haag had the desire to display more work from the museum’s trove. The first such foray, 2012’s “The Ancients Stole All Our Great Ideas,” saw the then-74-year-old artist
Ed Ruscha
curate his first show. The second, in 2016, was “During the Night,” with pieces selected by British ceramicist and writer
Edmund De Waal
.
Three years ago on a cold January day, Sharp received a call from a friend, asking whether he could give an impromptu tour through the museum for visitors. “I put on something less comfortable and ran to the museum,” said Sharp during a press preview for the exhibition. The visitors ended up being Anderson and Malouf, who already knew the museum well, but wanted to know more. It was a eureka moment as to who might curate the next exhibition in the series. The show took two years to assemble and involved Anderson and Malouf making several long visits to Vienna (where they “come to hide,” said Sharp—both artists were noticeably absent from the press conference and not available for interviews), and probing into its deepest depots. 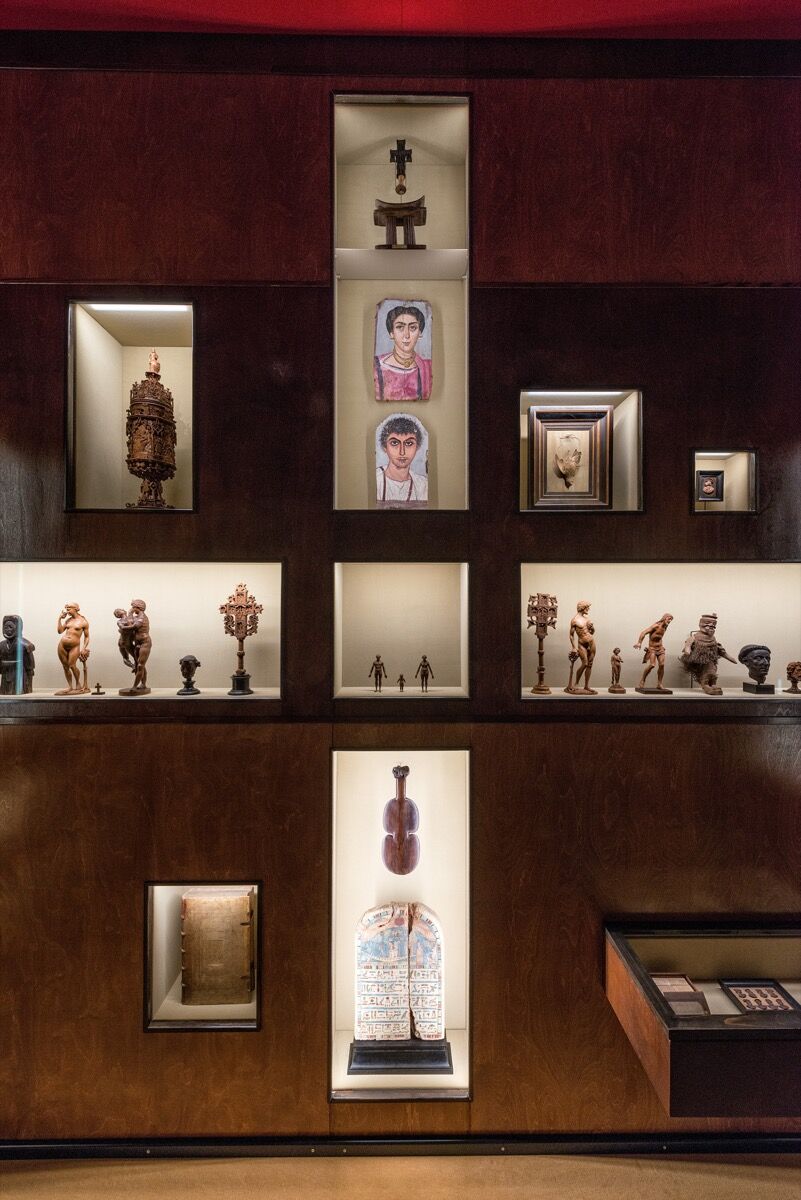 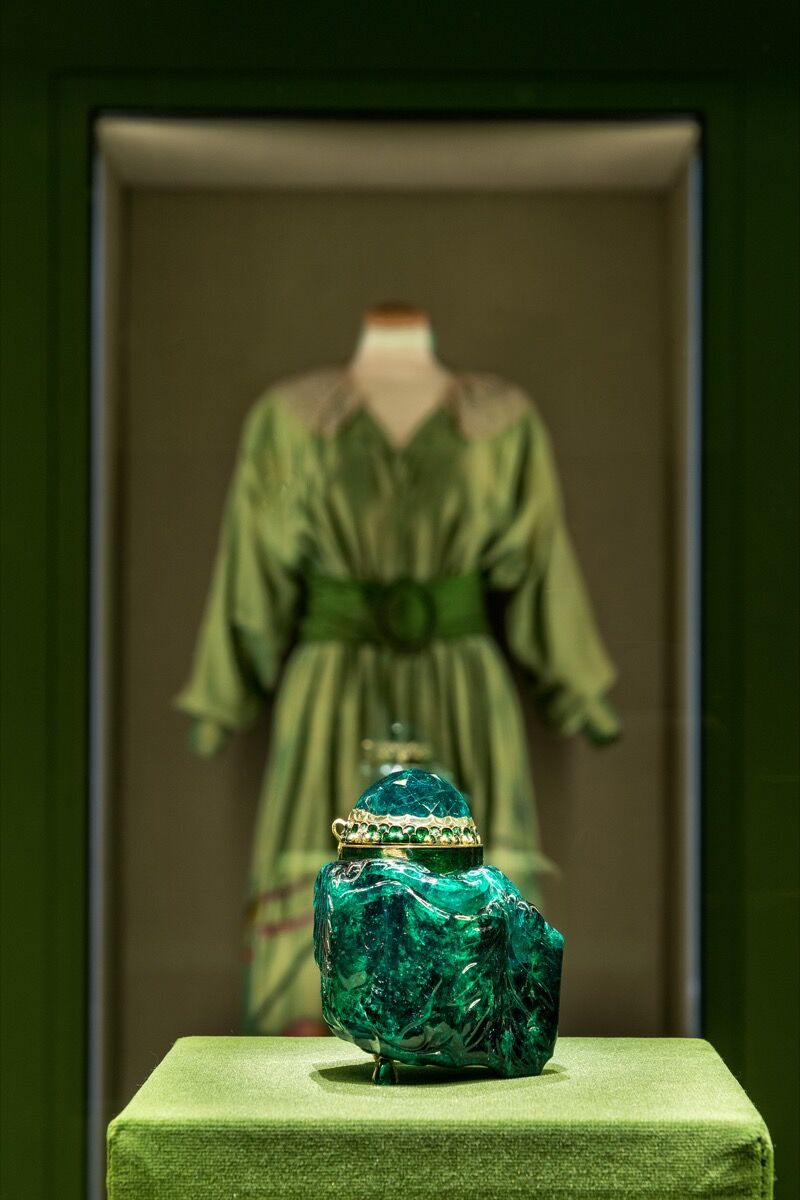 Advertisement
“Spitzmaus Mummy” is as quirky and eccentric as Anderson’s films. The low-lit exhibition opens with unattributed paintings of a “hirsute man” and his children, all with carnivalesque furry faces, yet posing for their portraits in fine dress as if they’re royalty (the portraits echo
Diego Veláquez
paintings depicting the Spanish Habsburgs as children in a picture gallery upstairs). The titular piece is a tiny wooden coffin for a mummified shrew (the Spitzmaus) from 4th century B.C.E. Egypt, and intricately decorated with drawings of a rodent and its afterlife, displayed in a vitrine in the center of the exhibition.
The show is arranged across eight cozy rooms, each with a clear (if oversimplified) criterion. One room is filled with green things: malachite stones, a green Roman vase from the 3rd century, a green dress worn in a 1970s production of Henrik Ibsen’s Hedda Gabler, a skirt of green feathers from 1870s Peru, a green Indonesian lute and bow, and paintings in which figures wear green clothing. Another space is hung floor-to-ceiling with historical paintings of royal babies and children from Central Europe, watched over by a petite suit of armor that could fit a 6-year-old. Another room displays representations of animals—cats, turtles, a phoenix, the shrew mummy, centuries-old Egyptian and Roman sculptures—in every medium and from all corners of the earth.
Anderson fans will recognize the filmmaker’s obsession with symmetry and color, but might notice a complete lack of the prescribed narratives that often mark his films. Standing in the galleries, though, one can almost conjure an alternate scene from The Grand Budapest Hotel (2014) in which, perhaps, the murder of a tiny shrew has taken place, the coffin of the victim set in a perfectly balanced, unmoving shot. The packed arrangement of objects here wouldn’t look out of place on the walls of Royal Tenenbaum’s house. And those familiar with Malouf’s 2015 children’s book Trilogy of Two will see echoes throughout the show of her eye for representational detail and poetic sensibility (Malouf is responsible for more than half of the exhibition, in fact). 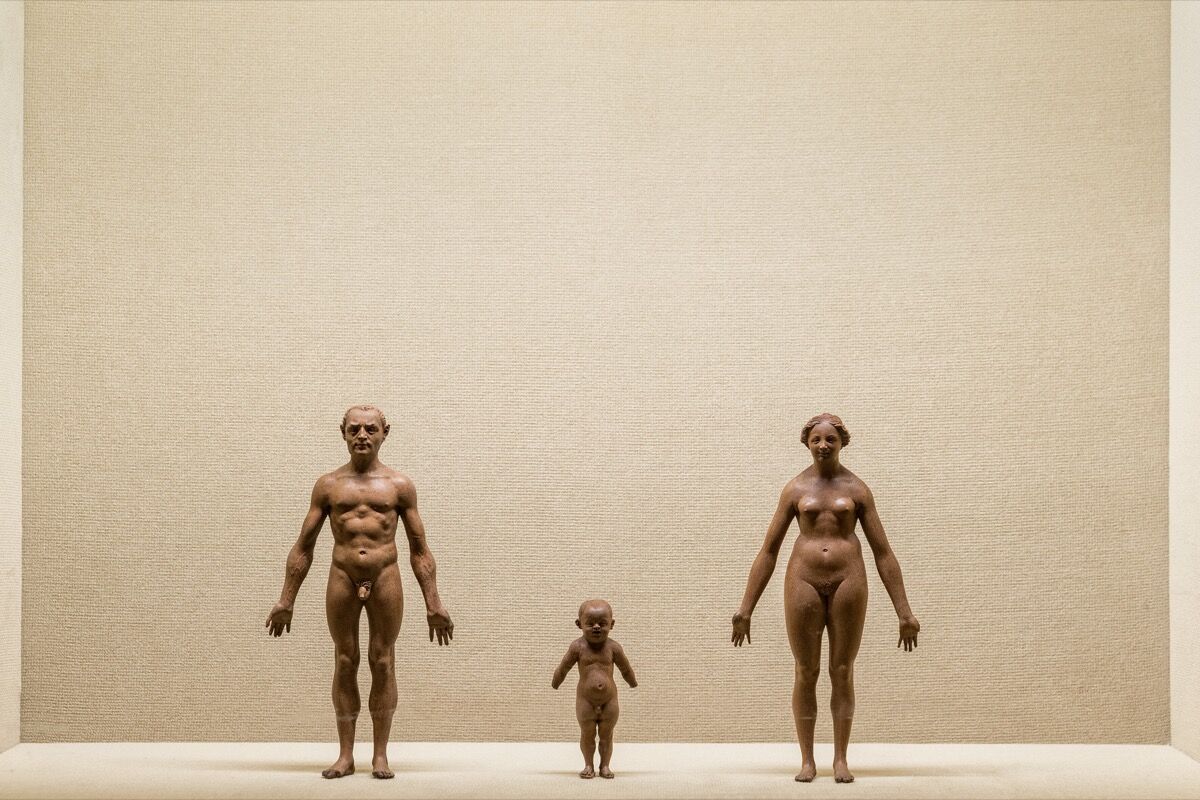 Let’s be honest. Art historians, real-life curators, and critics won’t find what they’re accustomed to here: Academic curatorial standards are set aside in favor of instinct, intuition, and arcane ideas. In his short essay in the exhibition catalogue, deliciously illustrated by Malouf, Anderson writes: “A box for the storage of Spanish powdered wigs goes next to a case for the storage of the crown of the king of Italy because both were so clearly shaped and formed by the introduction of the hinge.” Connections like this elude the typical viewer—and also were sometimes tricky for the museum’s senior curator to wrap his head around, according to Anderson’s essay.
Does this matter? Cabinets of curiosities are fun to view, and it’s high time at least some dusty museum rules are broken, or at least bent. Anderson and Malouf leave one vitrine near the back of the exhibition completely empty, a sort of visual joke. And why shouldn’t a wonky, obscure painting of a giant and dwarf by an unknown
Renaissance
painter be hung near a portrait of a corpulent Duke John Frederick of Saxony by the great
Titian
? Putting an Inuit doll and its teensy snowshoes in a vitrine near hand-drawn maps of sleigh tracks looping over the grounds of the Austrian royal palace might make us think, just for a minute, of how civilizations worked or played in the snow—which is likely more important to a filmmaker or writer than an art historian.
The Kunsthistorisches is undoubtedly leveraging the celebrity cachet of Wes Anderson, but gaining a new audience in a historical museum is not a bad thing. The show will move—in a “sequel” version, depending on conservation issues—to the Prada Foundation in Milan in 2019.
Anderson’s claim that the show might advance art history through trial and error (“in this case, error,” he writes self-deprecatingly) is a huge stretch, but “Spitzmaus” nonetheless provides new ways of looking at old, hidden things with a lot more levity and irony than museumgoers may be used to. That Lamborghini took a wild trip, but is back in one piece, filled with goodies.
Kimberly Bradley
Related Stories