What Happens When a Museum Closes? 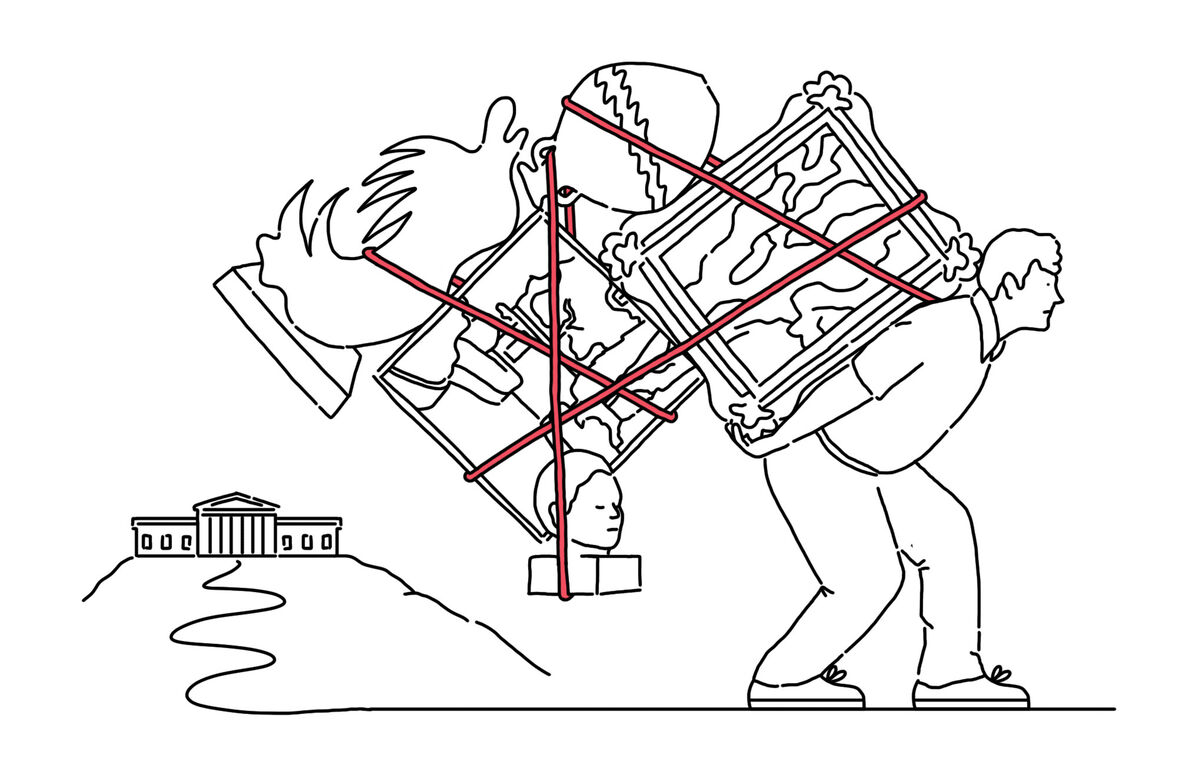 Richard P. Townsend was in Italy when he got the call. The director of New York’s Museum of Biblical Art, he was in the midst of preparing for an exhibition of
Donatello
’s sculpture that would go on to be the museum’s most well-attended and critically acclaimed.
It would also be its last. The caller, a member of the museum’s board, broke the news that the American Bible Society would soon be selling its Upper West Side building. The Museum of Biblical Art (MOBIA for short) had just 12 months to find another affordable home—a timeline that, in the end, proved too short. In June 2015, the institution closed its doors for good.
Townsend discovered, as he guided MOBIA through the closure process, that there was no blueprint for shuttering a museum. He reached out to the American Alliance of Museums, hoping they might have advice or materials to offer. “And they said, ‘No, sorry,’” Townsend recalled. “Of course, MOBIA was not the very first museum to close, but it doesn’t happen very often, and there are no guidebooks. So I had to figure it out for myself. It was not just distressing, it was terra incognita.”
What follows is a guidebook of sorts: takeaways from the museums that have come (and gone) before. Four recently dissolved cultural institutions—MOBIA in New York, the Fresno Metropolitan Museum of Art and Science in California, the Corcoran Gallery of Art in Washington D.C., and the Higgins Armory Museum in Massachusetts—each offer a lesson in how to weather the complex process of closing a museum.

When a museum can’t pay its debts

In general terms, a nonprofit museum follows the same procedure as any other public charity or tax-exempt organization going out of business. Three parties—the board of trustees, the creditors, and the state’s attorney general—work together to determine the institution’s fate. The board attempts to maximize assets after settling the debt, then uses that money to advance the museum’s mission; the creditors want to be paid in full; and the attorney general works to ensure that any additional assets are used in the best interest of both the public and the mission. Mark Gold, an attorney with a focus in museum law, divides these institutions into two broad categories: Either they have enough assets to pay off their liabilities, or they don’t.
When they don’t, as was the case with the Fresno Met in 2010, there is limited flexibility in determining how the collection will be parceled out. “Museum trustees have very little to say about it, and the creditors don’t really care where the art goes,” Gold said. The California museum, one of the largest in the state’s Central Valley, fell victim to an ambitious renovation project, unexpectedly coupled with the 2008 recession. Saddled with crippling debt, the Fresno Met considered filing for Chapter 11 bankruptcy. But local lawyer Riley C. Walter suggested the board of trustees take advantage of a little-used legal process instead, allowing them to sidestep formal court proceedings that would have been three times more expensive and twice as long.
By this point, the Fresno Met couldn’t even afford to shut down—a situation remedied by “Friends of the Met,” a group of longtime supporters who loaned the museum some $600,000 to keep it afloat until it could auction off its assets. In total, 3,218 pieces from the collection were divvied up and sold by auction houses Sotheby’s and Bonhams for a profit of $1.8 million; other objects were sold directly to interested parties. A grouping of Native American baskets was purchased by a local tribe for future public display in the San Joaquin Valley, while an extensive set of vintage puzzles was snapped up by a toy museum. Other works, including several Ansel Adams prints and a series of Asian snuff bottles, ended up scattered throughout private collections.
A bankruptcy lawyer by trade, Walter noted that the Fresno Met was “a more political process than most insolvencies. Even though it was clear who was entitled to get what, great pains were taken to consider the interest of families who had donated either works of art or money, the many members of the board that had dedicated huge amounts of time, and balancing that with the rights of creditors to be paid.”

But what if, when a museum decides to close, its assets actually exceed its liabilities? That grants the institution greater control over the future of its collection, increasing the likelihood that the works will stay together. The Higgins Armory Museum in Worcester, Massachusetts, offers one such example. Founded in 1928 to house what is now the country’s second-largest collection of arms and armor (behind only New York’s Metropolitan Museum of Art), the Higgins Armory had struggled for decades to address its insufficient endowment and antiquated building. By 2011, with its financial issues compounded by the recession, the board had come to the conclusion that the Armory was unsustainable in its current form.
According to the Armory’s former president James C. Donnelly, Jr., the “logical successor” to host the collection was the Worcester Art Museum. But “the process of finding a good fit with them and negotiating the terms was fascinating and complicated,” Donnelly said. “It’s as much a challenge for the successor institution as it is for the institution that’s making the donation. It’s easy to think that all gifts are good, so just take them and don’t ask any questions, but the fact of the matter is that the successor institution then has to say, ‘Wait a minute. What’s our mission? And what responsibilities are we taking on and how will we fulfill them?’”
Eventually, the two institutions found a mutually agreeable solution in which the art museum accepted a pared-down version of the Higgins collection, accompanied by a $7.5 million “dowry” to aid with conservation and exhibition costs. One of the most controversial aspects of the closure was the deaccessioning process—advised by staffers at the Met, the Armory sold off around 2,500 works deemed unsuitable for a museum.
“One of the things we did quite successfully is recognizing that, when you close a museum, some things will be lost forever,” Donnelly said. “That’s simply inevitable. But if you do it correctly, you can achieve some new things that would not have been possible otherwise.” Take “Knights!,” the first exhibition at the Worcester Art Museum incorporating the Higgins collection: In one section, 14th- and 15th-century suits of armor were displayed alongside courtly portraits, contextualizing armor design within the history of women’s fashion in a way that the Armory had never been able to.
Dan Yaeger, executive director of the New England Museum Association, said the story of Higgins Armory offers a blueprint for other institutions. “Depending on who you talk to, it’s seen as the best-case scenario for a museum that is likely to go out of business,” Yaeger said. “The collection is being honored and more or less staying in the home city.” Since 2010, he said he’s watched as museums in precarious positions increasingly find solutions via merger.

When the government steps in

The Corcoran Gallery of Art in D.C. went that route in 2014, when it donated its sizable collection to the National Gallery of Art (NGA) and transferred its College of Art and Design into the hands of George Washington University. “In fact, I wouldn’t really characterize the Corcoran as having closed,” interim director and president Peggy Loar pointed out. “Most of its elements have moved forward under different leadership. The structure as we knew it, of course, came to an end, but its history and nature remains.”
The Corcoran, which at the time of its closure was Washington’s oldest private art museum, existed simultaneously as an art school—a rarity in the 21st century. A series of financial blunders, including an unrealized $200 million Frank Gehry-designed extension in 2005, had long plagued the institution; when Loar came on in 2013, “it was really the twelfth hour,” she said. The combination of school and museum made it difficult to find a partner for a merger. In the end, the board was forced to split the Corcoran in two.
Although all non-profit museums have to seek approval from the state for decisions that would substantially change the nature of their operation, these interactions proved uneventful for the Higgins Armory and Fresno Met. Things became more contentious for the Corcoran when an advocacy group calling themselves “Save the Corcoran” sued to keep the institution independent. The Washington museum was required to go to court and present testimony and evidence to prove it had no choice but to revise the original 1869 charter. A Superior Court judge agreed that there was no viable alternative to the merger and the board moved forward with its original plan, although Loar noted that the lawsuit extended the closure process by six or seven months.
Despite the necessity of the merger, “I can tell you that changing the nature of a historic, 19th-century institution like the Corcoran was the most painful thing I’ve ever done,” Loar said. “I was a great lover of the Corcoran—I’d lived in Washington, I knew the institution well. I think only someone who loved it could have gone in and done what I did.”

Can we expect more museum closures?

On the whole, museum closures are relatively rare events. In 2009, the last year the American Alliance of Museums collected data on closures, according to the New York Times, 30 museums shuttered—less than one percent of the approximately 35,000 cultural institutions that exist across the United States. “In some ways, it’s almost a miracle that more museums don’t go out of business,” Yaeger said. “It’s such a difficult, competitive universe in some places to just keep your doors open, but somehow we do.”
Townsend believes, however, that MOBIA—which, lacking a permanent collection, had a more streamlined closure process compared to other recently dissolved institutions—may be one shutdown of many in the coming years. “I think it’s something that’s endemic,” he said. “We certainly haven’t seen the last of it.”
Townsend calls the Great Recession a “watershed moment” that significantly altered giving patterns, perhaps for good. “I talk to colleagues about this,” he said. “We’re all sort of shell-shocked. There was a real change in attitude towards corporate philanthropy from 2008 on. All you have to do is look at the Met’s donor list, on the title walls of exhibitions, and you can judge for yourself—there are so few corporations listed. If the Met has fewer corporate donors, you can imagine what that means for museums below that top tier.”
Townsend went on to tell the story of a family of donors who, upon hearing the news that MOBIA was closing, sent an email saying that they wished they’d known earlier, that they assumed there would be more time to give. “And that’s the lesson,” Townsend concluded. “We mustn’t take for granted these essential cultural institutions because, sometimes, they slip away.”
Abigail Cain
Illustration by Jan Buchczik for Artsy.
Related Stories