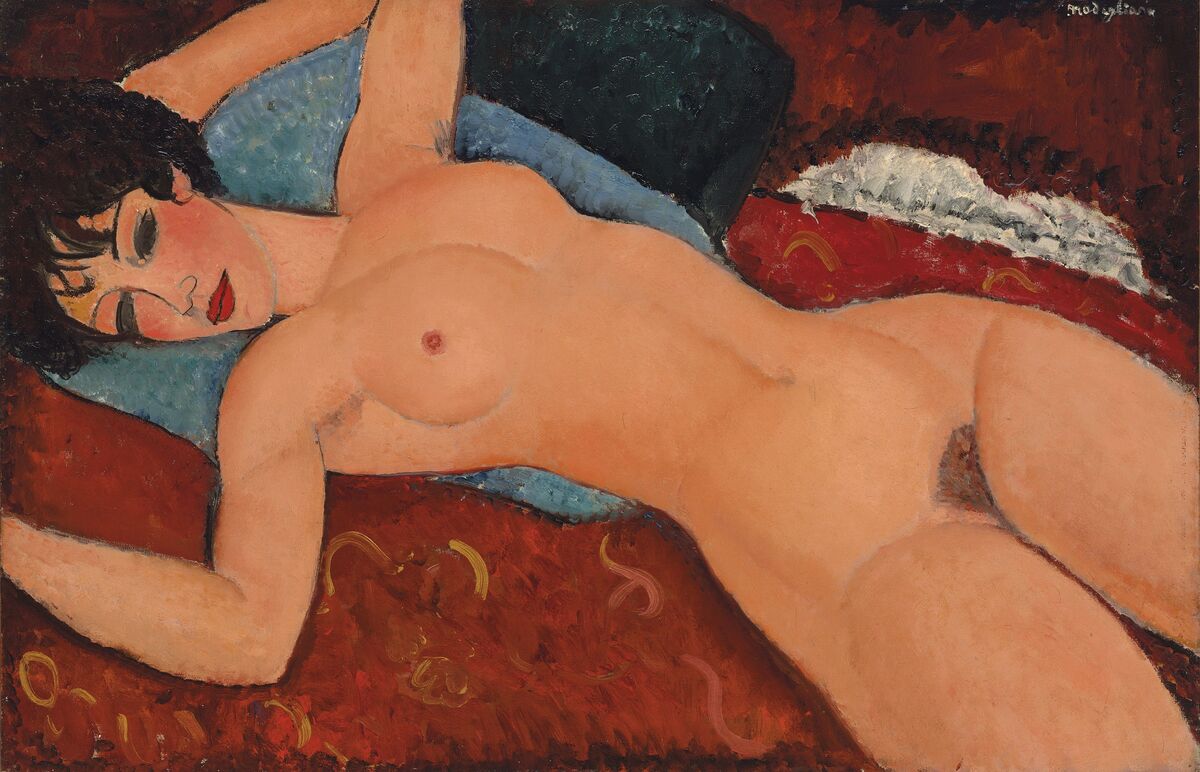 Amedeo Modigliani
painted numerous women over the course of his career. They were friends, partners, friends’ wives, bistrot acquaintances, lovers, and admirers. Their names—Louise, Jeanne, Lolotte, Margherita, Elvire, Renée—are those of models, ladies, workers, and fellow artists. Other times, their identities remain unknown, as is the case for Nu Couché (Reclining Nude), a painting executed in 1917-18, which will be offered at Christie’s New York on November 9th and estimated to exceed $100 million. It’s an odd destiny for a truly bohemian artist who lived an unregulated life of hardship and died prematurely at age 35. His works did not sell well during his lifetime, and Modigliani himself had no interest in the market. When, in 1917, a series of female nudes, among which may have been Nu Couché, was exhibited at the Galerie Berthe Weill in Paris, the public reaction to these too-sensuous figures was so strong that the police forced the closure of the show. Scandals often increase art prices, but why is this particular work so coveted by collectors that it is expected to break the current Modigliani world auction record of $70.7 million paid for Tête (1911-1912), a rare limestone sculpture sold at Sotheby’s in 2014?

A synthesis of the avant-garde

Nudes
are the most sought-after and thus the most expensive subjects in all of Modigliani’s painterly production—and this particular nude is especially iconic. “This is the painting that defines Modigliani,” commented Mariolina Bassetti, Christie’s Chairman and International Director, Italy, who was directly involved in the work’s consignment. “Nu Couché is extremely beautiful and attractive, yet in it there is a synthesis of all the historical avant-garde,” added Giovanna Bertazzoni, Christie’s Deputy Chairman and Senior International Director of Impressionist and Modern Art in London. “It combines Modigliani’s revolutionary capacity to look at faces and bodies with a new and absolutely modern [perspective]” that combines “geometries of the 19th century with Post-Cubism and particular analysis of
Brancusi
and African sculptures.”
The work brings together these post-cubist influences with those of Constructivism and also draws influence from Mondrian in its flat application of color, according to Bertazzoni. And it incorporates “Modigliani’s pictorial signature” of almond-shaped eyes with an unusually attractive face for the artist. “This is very rare for Modigliani, who has no intention of beauty and pleasantness,” explains Bertazzoni.

If it’s not in Ceroni, don’t touch it

Nu Couché has the good fortune to be one of the few nudes included in Ambrogio Ceroni’s Amedeo Modigliani, Peintre, published in 1958 and last updated in 1970. This catalogue, which includes a total of 337 works, is the art market’s Modigliani bible. Bertazzoni confirms, ‘‘If a Modigliani painting or sculpture is not in Ceroni, we don’t sell it.”
There have been other studies and catalogues on Modigliani, which the market uses only as a complement: those of Marc Restellini, Christian Parisot, Joseph Lanthemann, and Osvaldo Patani. As with many high-priced artists, fakes and lawsuits have emerged around Modigliani’s work. And some of Modigliani’s paintings were suspected to have been completed by others after the painter’s sudden death. Questions of authenticity are accentuated by the relative paucity of documents and basic information on the artist’s short and chaotic life—never mind that Modigliani’s signature style is reportedly relatively easy to fake. Thus a well-documented provenance for any Modigliani is fundamental to its sale.

Not only has Modigliani’s Nu Couché been owned by some extremely important collectors, but it has also not been available on the open market for some time. It has passed through the collections of the Polish poet and Modigliani dealer Léopold Zborowski, the wealthy art lover Jonas Netter, the industrialist couple Riccardo and Cesarina Gualino, and the lawyer Pietro Feroldi. When, in the late 1940s, Feroldi’s entire collection of over 80 works was sold to Gianni Mattioli for approximately 25 million lire, this Modigliani represented 5.5 million lire of the total. After Mattioli died in 1977, the collection was inherited by his daughter (the art historian Laura Mattioli Rossi) who, rumor has it, could be the current, anonymous consigner.
Nu Couché has had an extensive tally of institutional exhibition outings as well. It was shown at the Venice Biennale in the 1930s and in several leading museums around the world, including the Museum of Modern Art in New York, the Musée National d’Art Moderne in Paris, and the Tate Gallery and Royal Academy of Arts in London.

Modigliani has a global and stable market, maintained by both private collectors and museums. His sculptures and paintings rarely exchange hands. Nudes are even more rare; very few are included in the Ceroni catalogue and remain in private hands. In the last 12 years, only two nudes have appeared at auction: Reclining Nude (on Her Left Side) (1917), which sold for $26.8 million at Christie’s New York in 2003 and Nu assis sur un divan (La belle Romaine) (1917), which sold at Sotheby’s New York, for nearly $69 million in 2010. Other Modigliani nudes reportedly exchanged hands privately for prices around $100 million. Among them is Nu Couché au Coussin Bleu (1916), which was bought by the Russian magnate Dmitry Rybolovlev from Steven A. Cohen for $118 million in 2012.
The eroticism of the work’s subjects is such that it may serve as a deterrent to the UAE’s wealthy collectors, who have recently been responsible for driving up the prices of many record-breaking works. Yet this work is so rare that the battle to gain its possession is expected to be fierce nonetheless.
—Chiara Zampetti Egidi
Related Stories