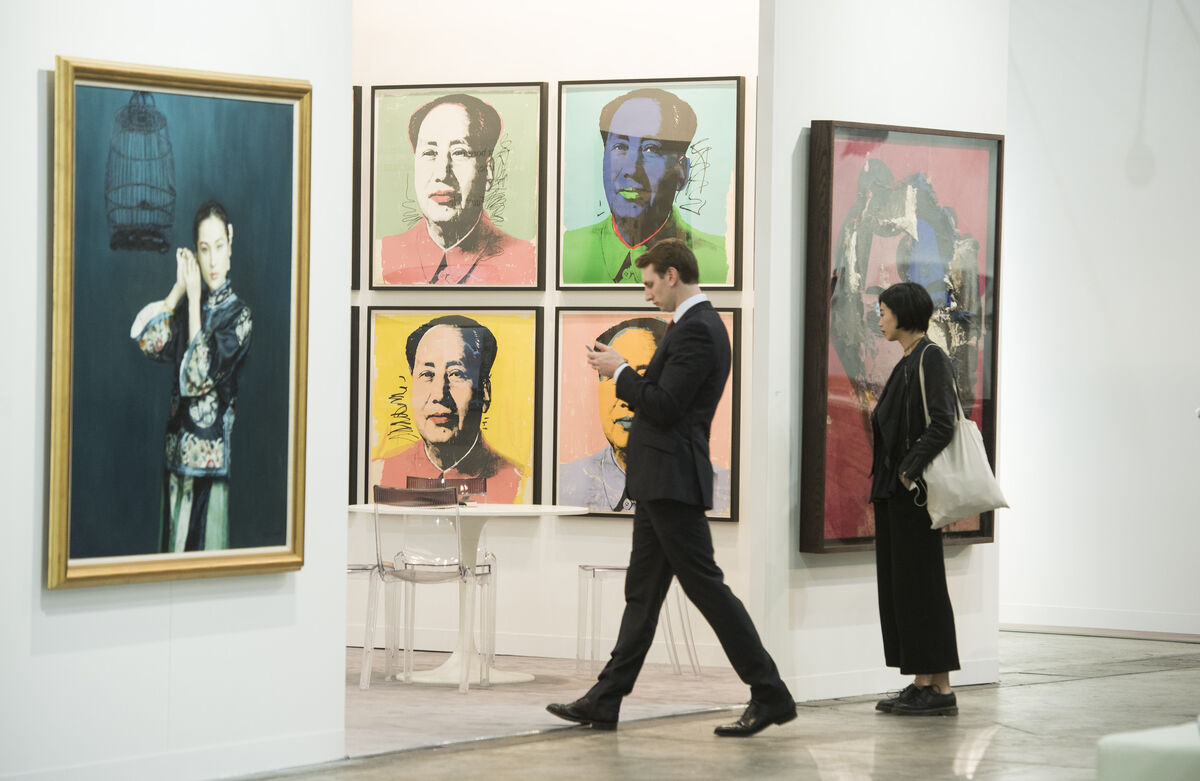 The art market could learn a lot from the Chinese economy. While dealers, collectors, and institutional buyers descended on Hong Kong this week for the city’s fourth edition of Art Basel, the larger business and investment community was focused on China’s mainland. Growth of GDP in the country is at a 25-year low. Meanwhile, the country’s debt-to-GDP ratio is at a staggeringly high 250% (corporate debt is at 160% of GDP). And Chinese companies are reporting the longest lag in collecting payment from their consumers—an average of 83 days from purchase—since 1999; that’s twice as long as in other emerging markets. It’s also something that has directly affected the art market—at the very least on the auction side of things—with the recent TEFAF report citing increasing payment lags and failed payments for purchases over $1.6 million during the past three years.
Analysts project at least two more years of hard times for the country’s real economy. The Chinese regime has turned to such analysts and said, in essence, get used to it. According to government economists, we have entered a “new normal,” where China’s economy will expand at a pace that better resembles that of the rest of the world than it does the country’s past two decades of explosive growth. 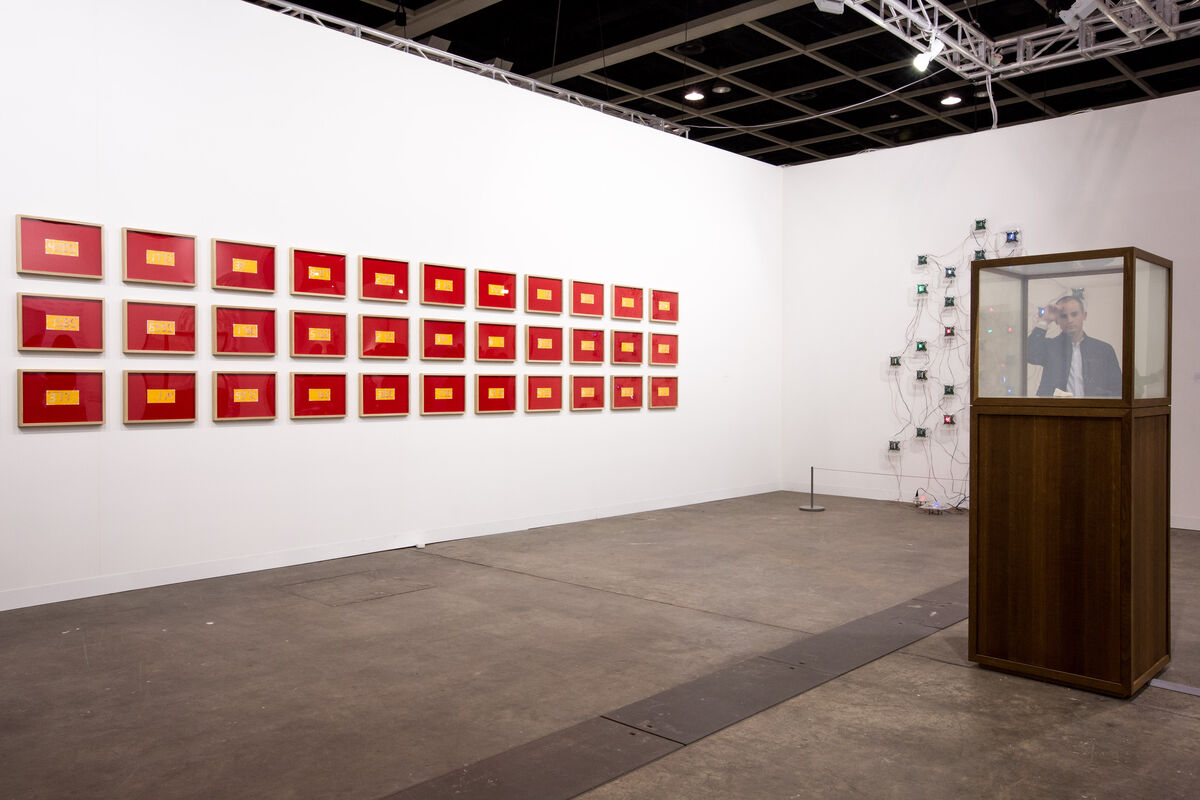 If this sounds like a familiar narrative to those more deeply entrenched in the art world, it’s because much of the same situation is taking place in our own industry. The art market contracted by 7% in 2015, according to the TEFAF report, with China’s market down 23%. While that contraction most accurately reflects data on the open, secondary market (especially in China), the market at large has entered a new normal. The market has shifted from one predicated on speculation over the past half-decade, which sent emerging art prices through the roof, to one getting used to its larger size—and art’s broader audience—and settling back into a sustainable pace.
“People have been anxious in the lead-up to the fair, both about what’s been going on in mainland China and also what’s going on in the world,” said Hong Kong collector and Duddell’s Arts Committee member Alan Lo, referencing both the economy to the north and the rise of populism worldwide. “But for the collectors who have been steadily acquiring works, it doesn’t seem to affect them so much,” added Lo. “I’m guessing there will be some effects on buyers of art, people who became very rich and want to buy some art and go out and get a Picasso. That’s a very different market than your serious collector type who may not necessarily take part in the stock market or other parts of the market that are related to the volatility we’re seeing.” 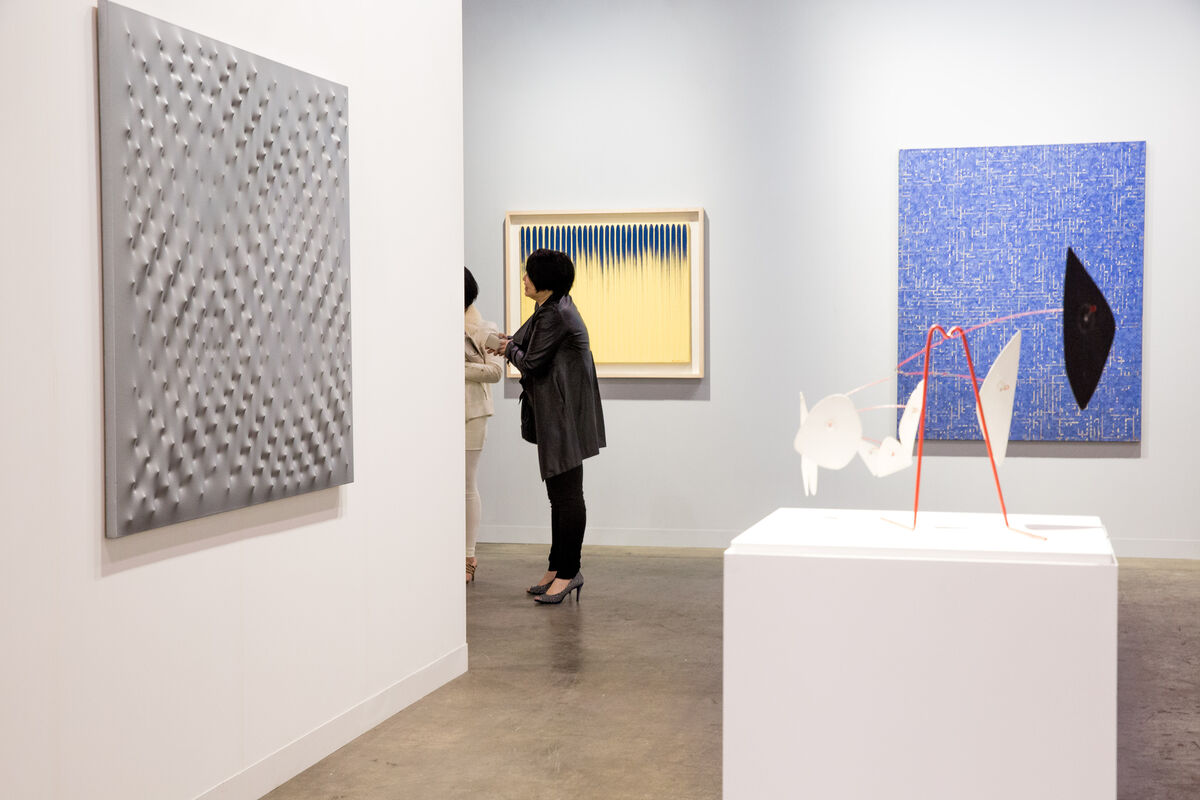 Advertisement
As Lo rightly presumed, Art Basel in Hong Kong shares another thing with the Chinese economy—unhindered consumption. Despite the economic downturn on the mainland, global consulting firm McKinsey & Company estimates that Chinese consumers will increase spending 10% annually through 2020 due to rising incomes. And amidst the reports of greater debt were reports of spending on spas, luxury goods, and entertainment leading that increase.
These reports were exemplified at the Hong Kong Exhibition and Convention Centre this week. During Art Basel’s first days, dealers reported a slew of six- and seven-figure sales. Dominique Lévy led that pack, selling an untitled
Rudolf Stingel
oil painting from 2010 for $1.9 million as well as Park Seo-Bo’s Ecriture 36-73 (1973) for $250,000. David Zwirner followed closely behind, with five paintings by Belgian artist Michaël Borremans selling for up to $1.6 million. The same price was fetched for
Luc Tuymans
’s Forever (2008), with the gallery also selling two paintings each by
Oscar Murillo
and
Jordan Wolfson
for $250,000 and $75,000, respectively per work, and
Wolfgang Tillmans
’s photograph Greifbar 28 (2014) for $180,000.
Zurich’s Galerie Gmurzynska wooed collectors with a suite of works by
Fernando Botero
. A large painting titled At the Park (2006) sold for $1.2 million, while two bronzes—Leda and the Swan (2006) and Donna seduta con mela (2011)—sold for $400,000 apiece. Like many galleries, Gmurzynska’s booth focused on just three artists from their stable—Botero,
Wifredo Lam
, and Pablo Picasso—a strategy that gallery CEO (and Art Basel in Hong Kong selection committee member) Mathias Rastorfer says is one learned from experience at the fair. “They’re very suspicious if you show bits and pieces,” said the dealer of the Asian audience. “They think that you’re not knowledgeable or not in charge. They want to see that you bring what you are good at, not what you think they might want. They also want to see that you have something in depth.” 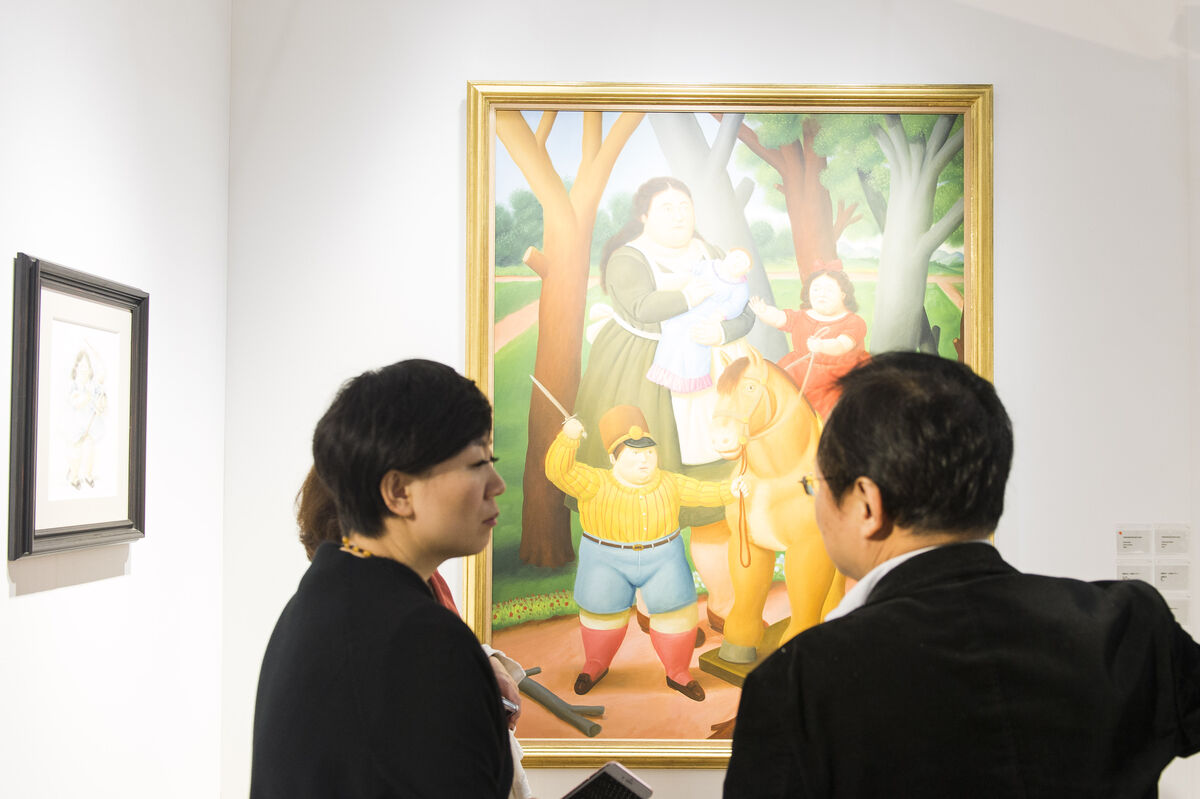 The strategy was further nuanced for this year’s particular economic situation: “With a lot of people wondering about where the market will go, we decided to only bring things of substance, both in terms of artistic career and price structure. And it has worked,” says Rastorfer. Lam, a Cuban artist of color who has recently received a much more prominent place among other
Surrealists
in the canon, is perhaps the most upwardly mobile in price: “It has moved upward, but not to the point where it is speculative. I think after the Tate show in the fall of this year, it will become even more public.”
Also selling well in the fair’s relatively small sub-section of galleries dealing Modern art was de Sarthe. Founder Pascal de Sarthe estimated he had sold under $10 million of the approximately $50 million in work in his stand, all of which was thematically tied by the color red. That did not, as of Wednesday evening, include the sizable Gerhard Richter abstraction on the booth’s exterior whose price was undisclosed but significant enough to warrant a personal guard. But de Sarthe was nonetheless pleased.
“The booth is a projection of what we’ve been doing for the past 40 years, a mix of Modern, post-war, and contemporary art,” said de Sarthe. “We sold the Park Seo-Bo, the Zao Wou-Ki, the Ma Sibo, and we’re very close on the Miró. It’s a very dynamic fair. We sold to Indonesia; we sold to China; we sold to Hong Kong.” When asked if any shift had taken place from the region’s economic tremors, de Sarthe added, “I don’t see any change from last year. If you have great works, if the quality is there, the market is there. That’s how it always has been. In 40 years, I’ve seen some prices go up and down. But if you have major works, the collectors are always there.”
For Art Basel in Hong Kong newcomer David Kordansky, the first day’s pace was off the charts, with nearly every work in the gallery’s booth of pieces by Jonas Wood, Mary Weatherford, and Rashid Johnson selling by Tuesday’s end on the range of $12,000–145,000. Likewise, at Cape Town’s Goodman Gallery, things got off to a very strong start. Goodman’s was one of the few solo booths in the Galleries sector of the fair, dedicated to South African artist William Kentridge. His three-channel video, Notes Towards a Model Opera (2014-2015), which will be on view at Art Basel Unlimited in Basel this summer, was the first work to sell, at $450,000. “There recently was a big retrospective of his work from the last 30 years at the Ullens Center in Beijing for which he made this new work,” said gallery director Liza Essers. “The catalogue isn’t available in Beijing but we’re able to sell it in Hong Kong, and all of the works on the booth relate to this work.” Four of the artist’s drawings also sold for $100,000–150,000. 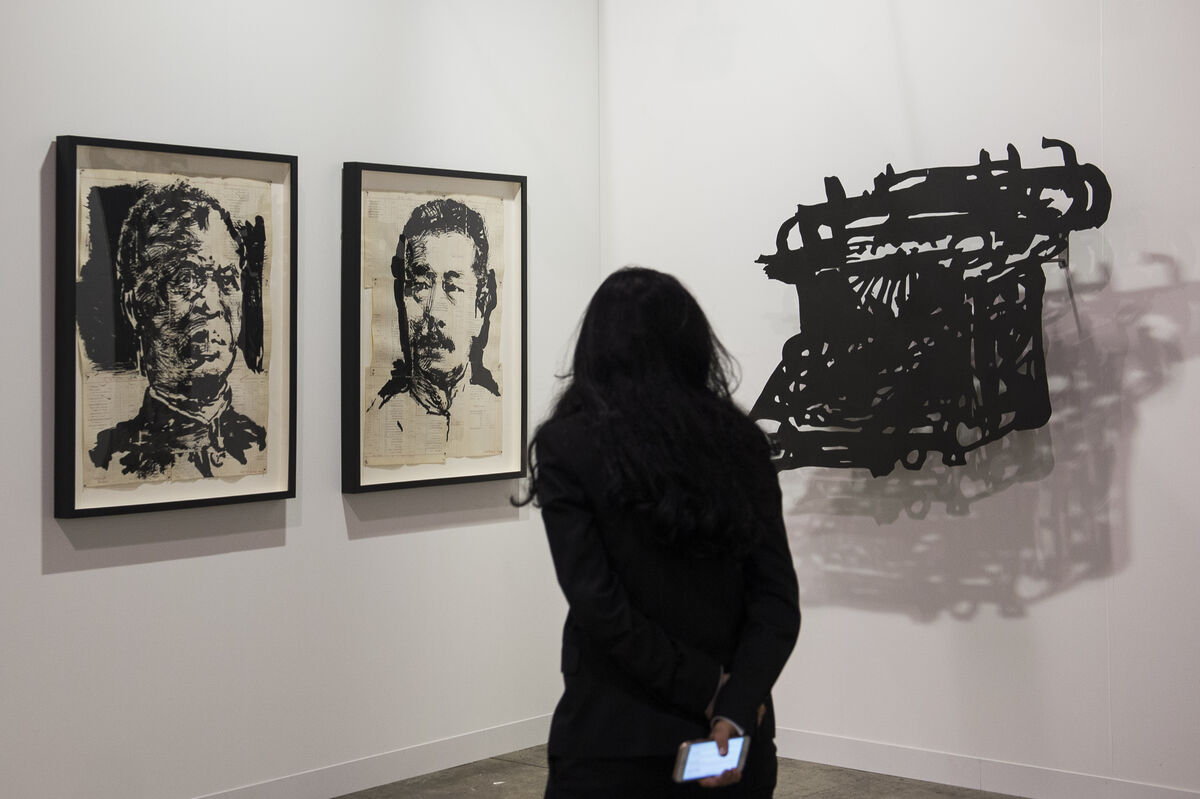 Most galleries, however, reported that in Hong Kong, you have to wait until the end of the fair to confirm sales on truly major works. Such was the case at Lisson Gallery. The gallery sold two Ryan Gander works—Associative Ghost Template #8 (2012) and Set Out Your Stall (2015)—for €30,000–40,000 early in the fair. Nathalie Djurberg & Hans Berg’s installation A Thief Caught in the Act (Blue with Orange Legs) (2015), which was shown as part of the fair’s Encounters section for large-scale works, sold for €60,000. And, while multiple collectors were vying for the set of major works by Anish Kapoor on the stand as well as a piece by Tatsuo Miyajima (whose work Time Waterfall currently lights up Hong Kong’s International Commerce Centre building each night through the end of April), sales hadn’t yet been confirmed. “We’ve been doing the fair here for a while, even before it was Art Basel, and have always found that for significant works people will wait until the last day or two of the fair. They want to view the work multiple times,” said Lisson’s Asia Pacific associate director Sarah Wang of the fair’s typical pace.
Much the same was the case at Sean Kelly’s stand. “We’ve sold across the board,” said Kelly, referring to all four artists in the booth—Marina Abramović,
Sun Xun
, Los Carpinteros, and
Hugo McCloud
—however, sales for the stand’s most significant works hadn’t yet been confirmed. “Yesterday was a good start, but we’re waiting on a number of things,” said Kelly of the fair’s first days. “That is fairly normal for this fair. We’ve learned that people want to come and spend some time to be educated about the work. They make their decisions a bit slower. Unless it’s a
Warhol
or another very famous name, the audience perhaps doesn’t know it as well.”
Kelly echoes Lo’s sentiment about global instability contributing to collectors’ steadier trigger-fingers. “It’s not just the economy but also the election,” he said. “Every time there is an election year people get very nervous, and this year it’s even worse because of all the raving lunatics” running for office. Kelly was among a number of dealers who were reflective on the week’s attacks in Brussels and art’s power to provide solace in times of instability, regardless of that instability’s effect on sales at a fair. “We can’t change it, but we have to regard ourselves as the antidote or for the art world to provide some respite.”

In the second half of Art Basel in Hong Kong, several further notable sales were recorded. Those reported include a work by
Cy Twombly
, which sold for a fair-tally-topping $10 million from Milan's Cardi Gallery, as well as a
Mark Bradford
from Hauser & Wirth, which sold for $1.5 million. Pace further reported selling out their booth of works priced up to $2.75 million and placed an '80s
Robert Rauschenberg
with an undisclosed Asian museum.
Alexander Forbes is Artsy’s Consumer Marketplace Strategist. He was previously the Executive Editor of Artsy Editorial.
Explore Art Basel in Hong Kong on Artsy.
Related Stories 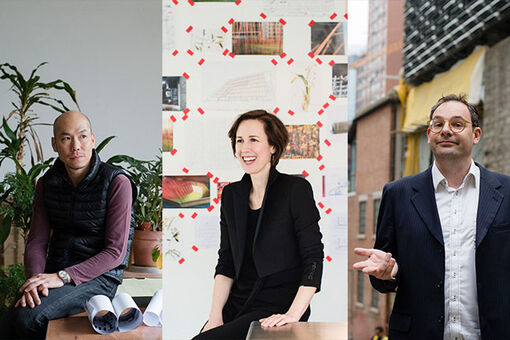