What Sold at Art Basel in Miami Beach? Art Basel in Miami Beach closes its 14th edition today, with dealers packing their wares back into crates this evening. Some of those works are destined for collectors’ homes, some headed back to gallery storage. The former group does not include the volume of seven- and eight-figure pieces that it has in recent years, at least as far as what dealers would report publicly. Completed transactions as of Saturday evening topped out at around $15 million, the asking price for
Francis Bacon
’s Man in Blue VI (1954) sold from Van de Weghe’s stand.
The New York dealer also sold Picasso’s Buste au Chapeau (1971) for $10.5 million. And a handful of sales were reported at or above the million-dollar mark:
Andy Warhol
’s 1980 silkscreen of
Joseph Beuys
on offer from Thaddaeus Ropac sold for $1.4 million; a Günther Uecker nail painting, Ohne Titel (Untitled) (1962), sold for $1 million at Skarstedt; Leipzig school (and current figuration boom) forebear Neo Rauch’s Lösung (Solution) (2005) from David Zwirner went for $1.5 million; Paul McCarthy’s White Snow, Dopey, Black Red White, Black (2011-2015) was also acquired for $1.5 million from Hauser & Wirth; a
Robert Indiana
work sold from Gmurzynska’s standout Germano Celant-curated stand; and at least one Louise Nevelson fetched $1 million from Pace’s sold-out presentation of 16 of her works. 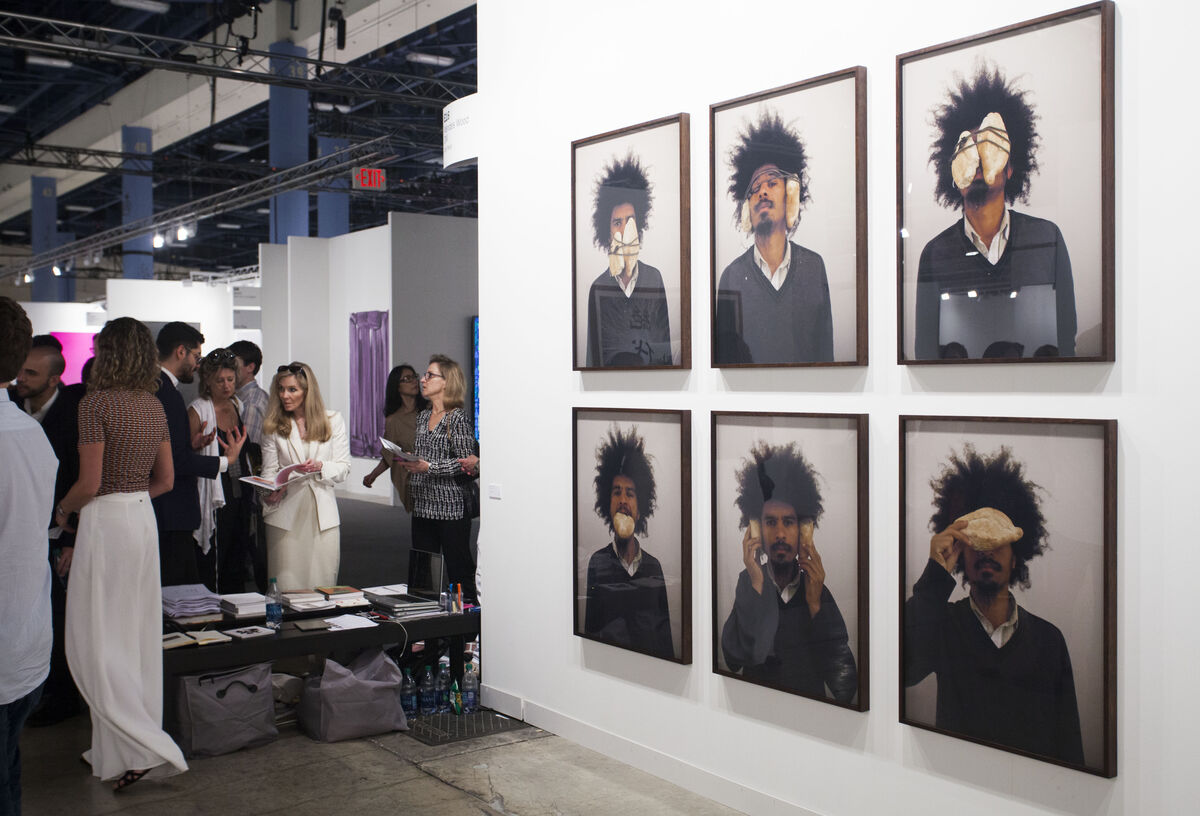 Sales were much more plentiful in the six figures, exponentially so as prices approached the lower bound of that range. The distribution is not altogether surprising, nor is it necessarily a bad indicator in the long-term. The New York auctions in November lagged behind performance this past spring, with works that had relatively recently appeared on the market not faring particularly well. Some might characterize such a change as marking an increasingly discerning marketplace, others as a sign of market froth edging on a spillover. Either way, it suggests that, regardless of your position on art-as-investment, major works will need to be held for a long period of time.
Meanwhile, Friday’s strong U.S. jobs report indicated that a near-certain hike in the interest rate is imminent, the first time the Fed has raised rates in nearly a decade. Independent of the November auctions, that positive indicator of health in the U.S. economy might have spurred sales at Art Basel. A particularly bullish adviser I spoke to said that people have “lots of money right now” and will buy when they see something they like. For the majority of merely high-net-worth individuals buying at the fair, that is probably true. But with the art market (like the stock market) waffling slightly at the moment, the very, very top-end of the market could be staying liquid for the next 10 days to take advantage of the upward swing that has historically followed rate-hike announcements. We’ll see what happens after December 16th. 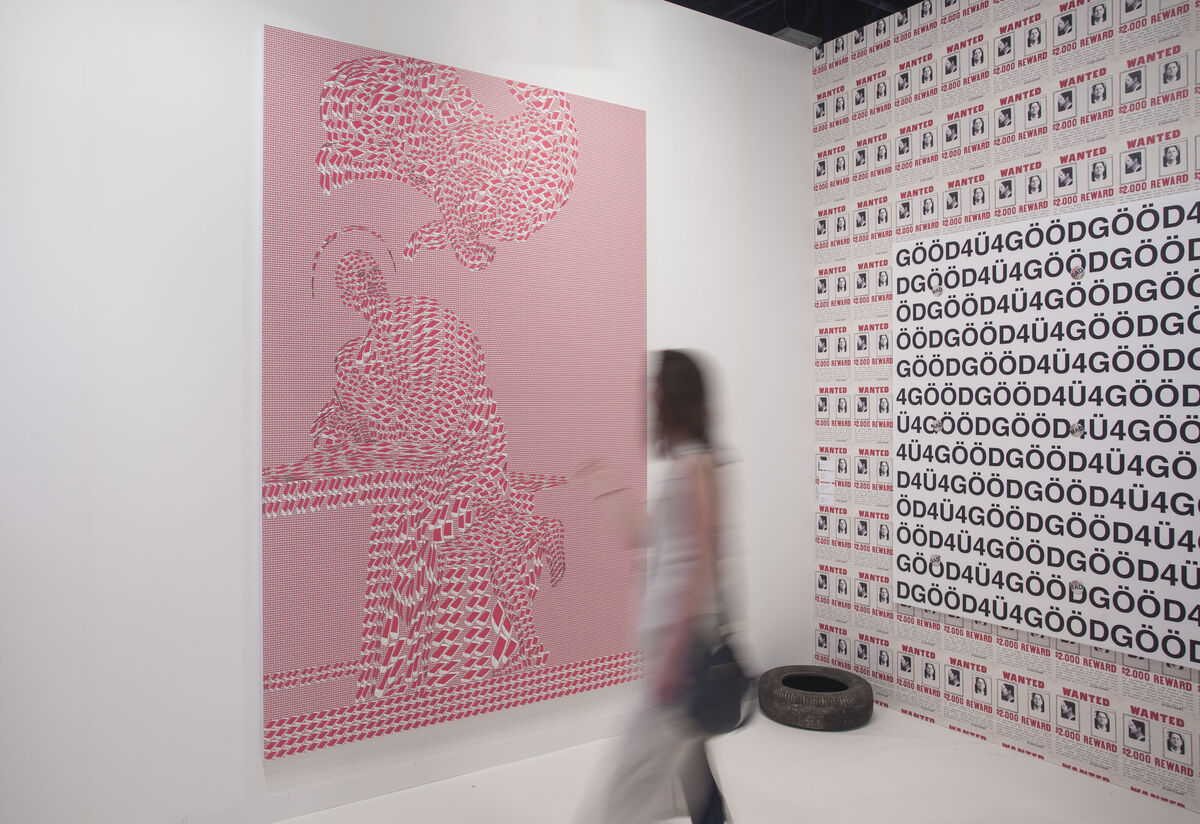 Advertisement
Either way, the midrange of sales—which by Art Basel standards is in the six figures—was on fire. Ropac further reported the $770,000 sale of
Robert Rauschenberg
’s Appalachian Double Latch Spring Glut (1989); the sale of two Georg Baselitz bronzes, Bündel (Bunch) (2015) from an edition of six for €750,000 apiece and Es ist kein Zimmer frei (2015) for €500,000; Robert Longo’s charcoal Untitled (Potemkin, Black Square) (2015) going for $450,000; and the sale of Alex Katz’s Four Trees 3 (2015) for $400,000.
Following the Rauch, Zwirner reported the $850,000 sale of
Kerry James Marshall
’s Untitled (Blot) (2015), the sale of two works by Lisa Yuskavage—The Big Pileup (2015) for $800,000 and Sorbet Sky (2013) for $120,000—as well as
Sherrie Levine
’s 2015 bronze Beach Ball after Lichtenstein going for $450,000, and an untitled aluminum panel work by
Isa Genzken
from 2014 being acquired for $250,000. Perhaps the booth’s most significant work, Chris Ofili’s Poolside (Smoke Signals) (2014–2015) sold for $750,000. It was previously presented in the artist’s major, critically acclaimed retrospective “Night and Day,” organized by the New Museum, which traveled to the Aspen Art Museum this past summer.
London’s Thomas Dane fared well, in the initial two days selling an untitled
Kelley Walker
from 2014 for $400,000,
Lynda Benglis
’s COMANCHE (2013) for $65,000, two
Hurvin Anderson
drawings for just under $100,000 each, and a painting by
Ella Kruglyanskaya
. “It sold immediately,” said Dane of the hot Latvian figurative painter’s work. The dealer indicated that, for the most part, it was business as usual at Art Basel this year. “There are always going to be certain artists like Hurvin Anderson and Ella that are in a great deal of demand, so there’s a big rush. And then there are other artists where it takes having conversations over time.”
Dane echoed sentiments expressed by numerous dealers across the fair that collectors are slightly more patient in their purchases than during years past. Whether it indicates an increased attention to content, “varies from person to person and adviser to adviser,” said Dane. “Some still come with a list of names that they’re frantically checking off. Others take more time to consider things in greater depth.” 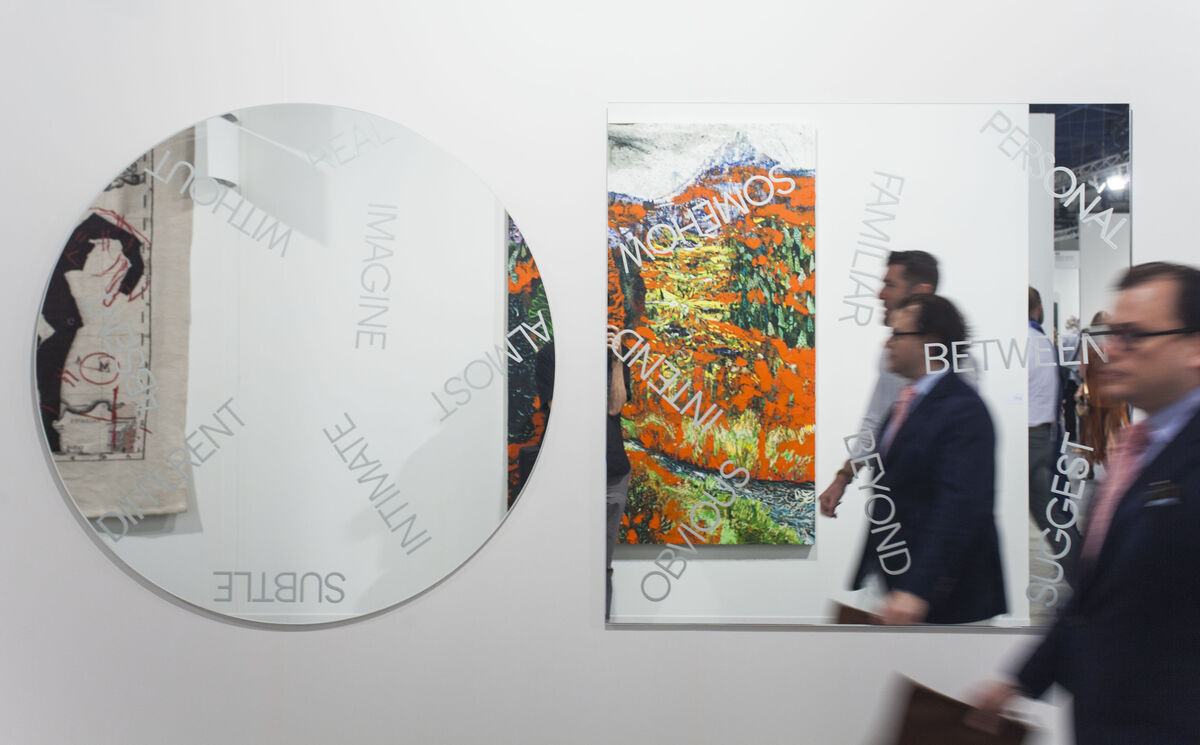 Fellow Londoner Alison Jacques reported a similarly solid set of six-figure sales in Miami Beach. A 1955 work on paper by Lygia Clark—the late Brazilian artist for whom demand is still rampant following her MoMA retrospective last year—topped Jacques’s balance sheet at $600,000. Dorothea Tanning’s 1979 painting Salut, délire! (Hail, Delirium!), a sumptuous abstraction of two intertwined figures that featured in the gallery’s collaborative show of Tanning’s work at Marianne Boesky’s uptown space this past summer, sold for $400,000. Slovak artist Maria Bartuszová’s bronze Drop (1963-1984) was also quick to sell for €200,000.
Works by
Nari Ward
were particularly resonant with collectors at Lehmann Maupin’s booth, doubtlessly thanks in part to “Sun Splashed,” his largest exhibition to date, which opened at the Pérez Art Museum Miami on November 19th. One of 27 artists in the fair’s Kabinett sector who receive curated, solo presentations as part of larger booths, Ward’s We Shall Overcome (2015) went for $70,000–90,000 and Blackboard Numbers (2014) for $50,000–60,000. David Maupin noted that the platform allowed for the gallery to “create a larger dialogue around (Ward’s) practice.” The gallery sold
Robin Rhode
’s RGB (2015), on the heels of his Times Square Performa commission, for €30,000–40,000. Higher up the price bracket, Lehmann Maupin reported selling
Teresita Fernández
’s ceramic panel work Viñales (Precipice) (2015) for $300,000–400,000, a fresh-from-the-studio
Liu Wei
painting for $200,000–250,000,
Mickalene Thomas
’s Clarivel #1 (2015) for $75,000–125,000, and
Tracey Emin
’s Is this Love (2012) and Loving You More (2015) for £100,000–150,000 and £50,000, respectively. Maupin added that the fair “is unique in that we continue to have steady sales and conversations with international collectors and institutions throughout the week, not just on the VIP days.” Although there was a decent amount of apprehension about the lack of fireworks throughout the week, this steady stream of sales and their location on the overall price spectrum could suggest that, at least in the primary market, the much-worried-about froth is settling rather than approaching a crash. Dealers—and Art Basel director Marc Spiegler, for that matter—have for seasons warned against placing too much weight in the upper regions of the auction market when analyzing the vast majority of business conducted in the art world. That’s likely the case at fairs too.
—Alexander Forbes
Explore Art Basel in Miami Beach 2015 on Artsy.
Related Stories