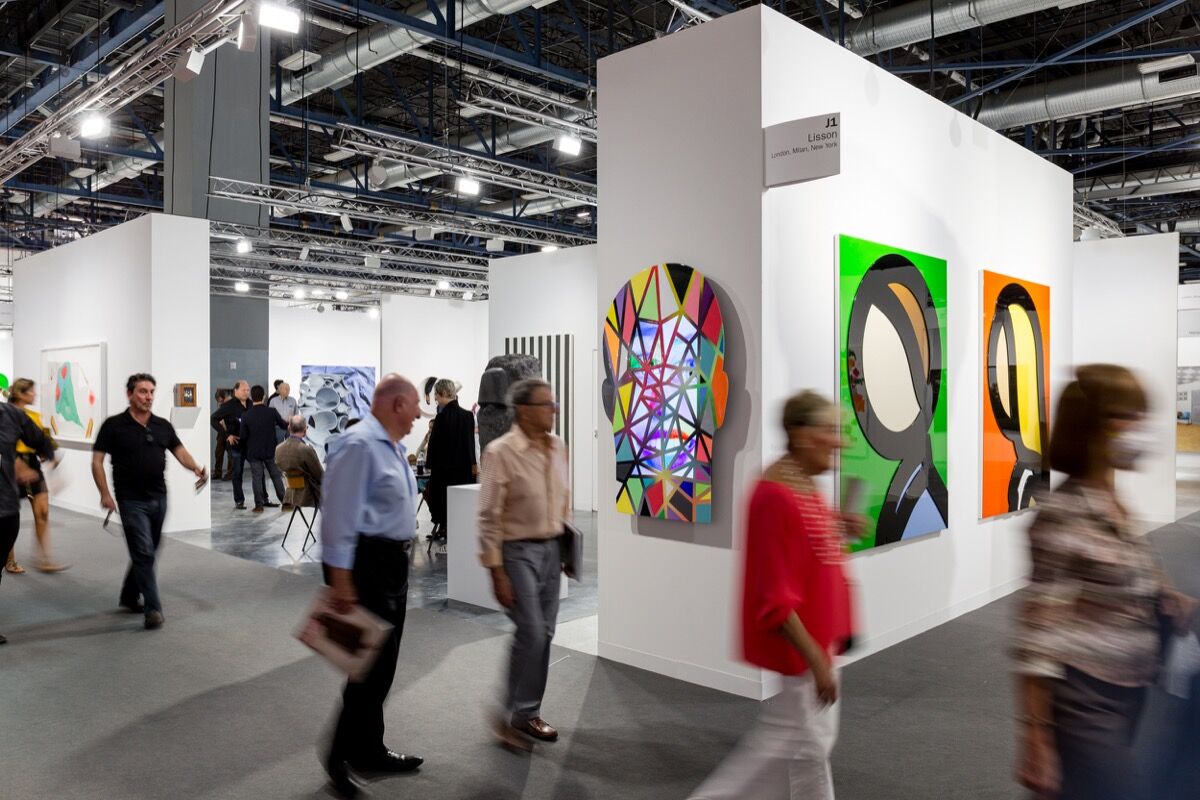 The 15th edition of Art Basel in Miami Beach comes to a close on Sunday. Over five days, 269 galleries from 29 countries have exhibited at the Miami Beach Convention Center in the primary art market’s biggest week of activity, annually.
As has been the case across most financial markets and business sectors this year, uncertainty surrounding the potential of Brexit, the presidency of Donald Trump, and slowing growth in emerging markets dampened demand for art—and in the secondary market, collectors’ willingness to sell—throughout 2016. Art Basel in Miami Beach fell at a particularly strange point along this path of uncertainty. Numerous factors including the outcome of the U.S. presidential election, political and economic instability across the globe, and the continued presence of the Zika virus in Miami have made for less crowded halls at Art Basel in Miami Beach this year. And the art market continues an 18-month trend of softening, which in turn is giving collectors greater leverage to negotiate prices and delay purchases. But, all things considered, results this week in Miami give an encouraging outlook for the art market in 2017. Works up to $500,000 were selling at relatively the same pace that you would expect in all but the most booming of years. The very upper and lower reaches of the market still appear softer than they were in recent years, however, which is something that may continue for some time.
Generally, we know more about what the future will look like at this stage than we have in well over a year. But while Brexit has hit the pound hard already, its full effects will only become apparent once the U.K. actually leaves the European Union. Meanwhile, we have a pretty clear idea of the economic platform that Donald Trump will enact based on his campaign, a pro-Big Business and pro-Capital approach confirmed by his treasury appointments this week (including Steven Mnuchin, the son of art dealer Robert Mnuchin). But some who have become accustomed to expect the unexpected out of President-elect Trump (like his Friday phone call with Taiwan president Tsai Ing-wen that may lead to a more strained relationship with China, one of the United States’s biggest trading partners) are wary of assuming assured economic growth. We have less uncertainty in terms of decisions to be made. But we have little certainty just yet. 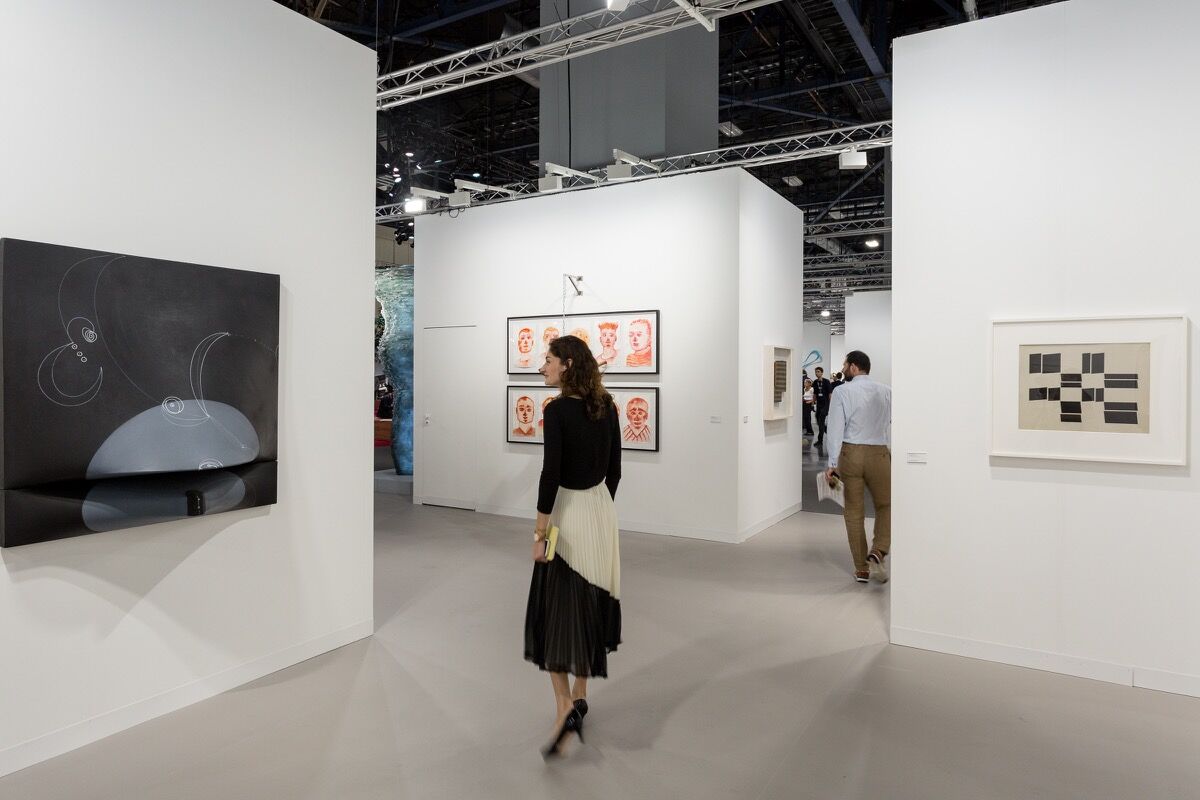 By every indication, a Trump presidency will allow the rich to get richer. The presumption of forthcoming income and corporate tax cuts as well as fiscal stimulus measures like proposed infrastructure investments have sent the Dow above 19,000, and caused U.S. Bond markets to record losses not seen since 1990—both signs of forthcoming growth (and potentially rising inflation). Art collecting, however, is much more a study in behavioral economics than it is perfect math. “The new administration’s policies will have a certain benefit for the collecting class. But, on the other hand, there are people who feel distressed or depressed and who may not want to jump in for some time,” Paula Cooper director Steven P. Henry told me early this week. People buy more art when they feel good. And so, to the extent that certain collectors may value the philosophical direction of their country rather than their tax rate, we could expect art market performance to not hold lockstep with U.S. economic growth at large. Then again, many high-power buyers take a different view.
At Art Basel in Miami Beach, the primary market demonstrated some similarity to the direction auction houses have increasingly moved. Much of the commentary around recent auctions has related to executives having “managed” them to solid sell-through rates through guarantees and other measures, despite supply constraints and dampened demand. At the fair, this can be seen in the increasingly trade-show-like approach of dealers—using the fair as an advertising platform for future sales as much as they are a direct venue to close—and the great extent to which sales occurring before the fair opens its gates have become the norm.
Take Paul Kasmin Gallery, for example, which accounted for one of Art Basel in Miami Beach’s highest-priced sales reported this year:
Lee Krasner
’s Another Storm (1963), for which it was asking $6 million. “We had a discussion about it beforehand and had a number of interested parties,” said senior director Nick Olney. “But we were very excited to have this to announce to the world in a very physical way that we’re working with the [Pollock-Krasner Foundation].” The piece is among Krasner’s five largest canvases and was shown in Bryan Robertson’s 1965 exhibition of her work at Whitechapel, as well as Marcia Tucker’s 1973 survey at the Whitney. In a previous market, one might have imagined a piece like this being held back for an 11:05 a.m. bidding war during Wednesday’s VIP preview. But in 2016, things are more reserved and more planned out, the Krasner sale being confirmed on Thursday. 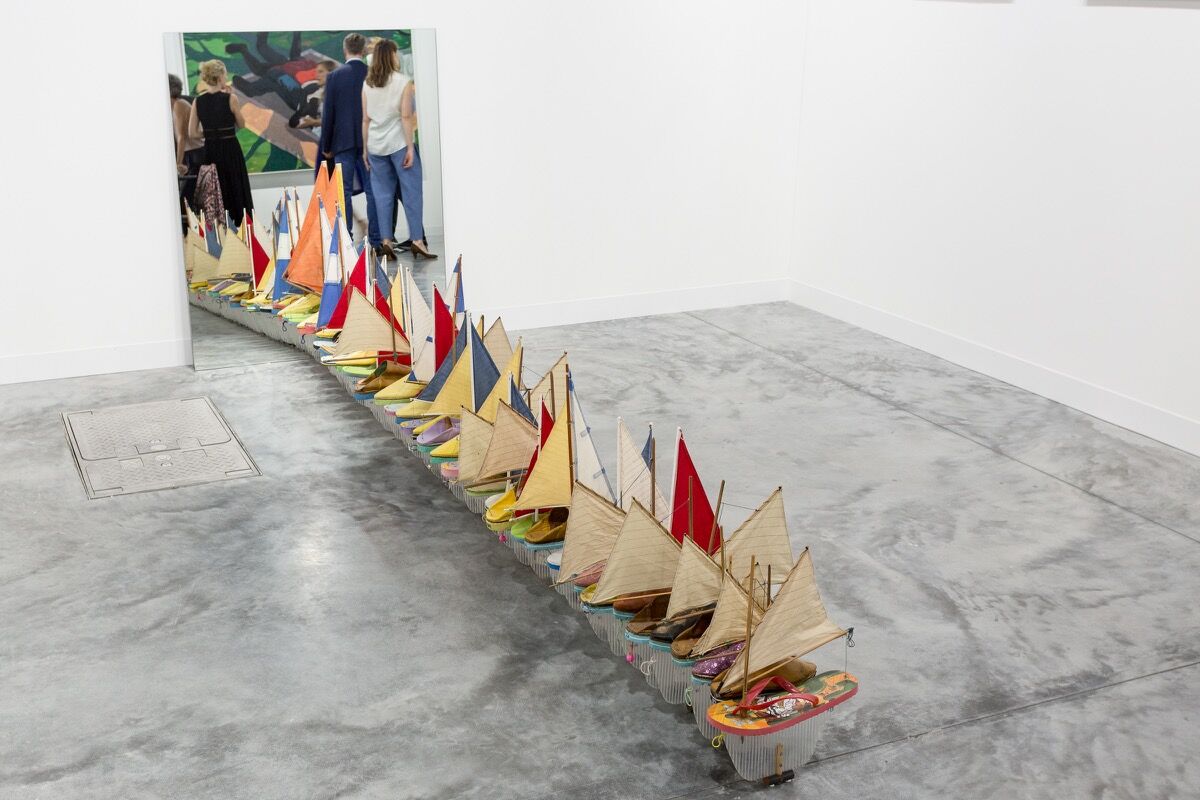 Advertisement
“I haven’t found hesitancy [among buyers]. It’s maybe just less impulsive,” said Olney. As dealers suggested pre-election during October’s Frieze London, this can be to the benefit of more established galleries. As Olney explains, “In uncertain times, people become more discerning and more price-conscious as well. For our philosophy and approach, that ends up working quite well,” observing that much the same result happened in the market rout of 2008 and 2009. “Our historical program has artists who are in the canon but may have been undervalued for some time. A lot of our other artists are mid-career; they’re proven and their markets are solid. They’re not the flavor of the month.” Among other sales were five works by
Iván Navarro
priced from $50,000 to $150,000,
William N. Copley
’s Under the Stars (Hommage à Picabia) (1994) for $185,000, and
Roxy Paine
’s $2 million, 41-foot-tall sculpture Compression (2016)—clearly not an impulse buy.
For galleries, part of growing in uncertain times has also meant expanding their footprints internationally. Physical gallery spaces are once again becoming core to a business that several years ago spoke frequently about art fairs’ and Instagram’s eclipse of the brick-and-mortar space. But those that can muster more than one space distribute their risk across multiple markets. “I think the slowdown may have been imagined. At least, for us, that’s been the experience. We’ve seen very steady, very robust business,” said Lisson’s international director, Alex Logsdail, who brought the gallery to New York this past May, adding a fourth location to two in London and one in Milan.
This investment has not only expanded the gallery’s market—Logsdail reported its having sold out both its
Carmen Herrera
and
Ryan Gander
shows in New York. But the relative increased strength of the dollar post-Brexit has also reportedly proved beneficial. Logsdail noted London’s resilience as a market and added that Brexit “may even have had a net positive effect. Maybe that’s short-term, maybe it’s not.” With the decrease in the value of sterling, he said, “all of a sudden artists’ work that is priced in pounds looks very affordable.” At Art Basel, the gallery sold Herrera’s Untitled Estructura (Blue) (1966/2015) and Ave Maria (2011) for $450,000 apiece as well as several works on paper by the 101-year-old artist; a spray-gun work by Roy Colmer, who the gallery just started representing and who will have a show in New York in January, for $50,000; multiple works by
Anish Kapoor
for £500,000–700,000; as well as works by
Stanley Whitney
,
Ryan Gander
,
Pedro Reyes
, and
Tony Cragg
for undisclosed prices. 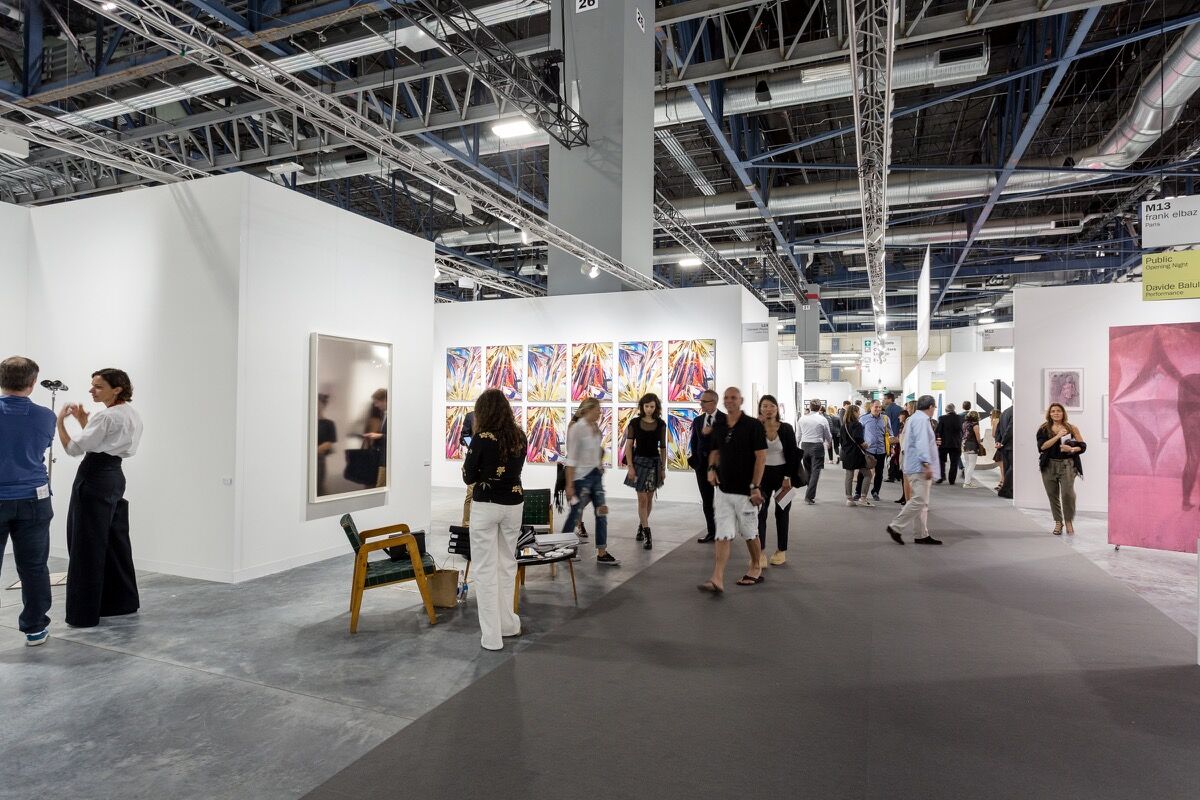 Expanding to New York has also been integral to Brazilian Galeria Nara Roesler’s continued strength, said director Alexandra Garcia Waldman. “When the South is on holiday, the North isn’t. So it keeps the program more active.” (The gallery will open an additional space in Rio’s Jockey Club next year.) The gallery sold four works by
Marco Maggi
(BIG DATA (North), 2016, for $42,000; BIG DATA (West), 2016, for $36,000; BIG DATA (EAST), 2016, for $42,000; and Complete Coverage on Oiticica (March, Turner Box), 2016, for $14,000), an untitled painting by
Tomie Ohtake
from 1965 for $160,000, and three works by
Julio Le Parc
(Alchimie 339: En spirale huit couleurs, 2008 / 2016, for €150,000; Continuel mobile transparent, 1962 / 2016, for €290,000; and Continuel Mobile rouge, 1962 / 2016, for €190,000), among others. “There’s been a sense that the fair is in a different place, but for us we’ve had waves” of sales, said Waldman. “It’s been non-stop. But then again I was in a very lucky position,” with Le Parc having this week’s most prominent institutional exhibition, a major retrospective at the Pérez Art Museum Miami (PAMM). He also helped curate the gallery’s stand.
Like Paul Kasmin’s Olney, Waldman cited the established nature of the gallery’s program as a benefit during global instability. “At a time when you don’t really know what’s happening in the world, there is a move to collect more consolidated work, to invest in things that you’re more sure about. For us, that works very well,” she said. Nara Roesler’s experience further reflects those of other galleries in Brazil, according to a report by regional gallery association Latitude to be released next week. Despite political turmoil in Brazil and the economic crisis gripping the country, three-quarters of those surveyed over a period from 2015 to 2016 suggested no change or an uptick in growth over the past year. That activity, however, has increasingly come from abroad, with 20% of sales taking place internationally in 2015, compared to 15% in 2014, and 10% of sales taking place online versus 4% in 2014.
At Pace, director Ben Strauss-Malcolm was among the few dealers who would confirm a different sales cycle at present. “It’s a little more slow pace but it’s a constant pace,” he said. Strauss-Malcolm went on to suggest that “people are still responding to the works that are most impactful to them.” And in a brighter indication for the market, he noted that demand had rebalanced across all the market segments that Pace deals in. 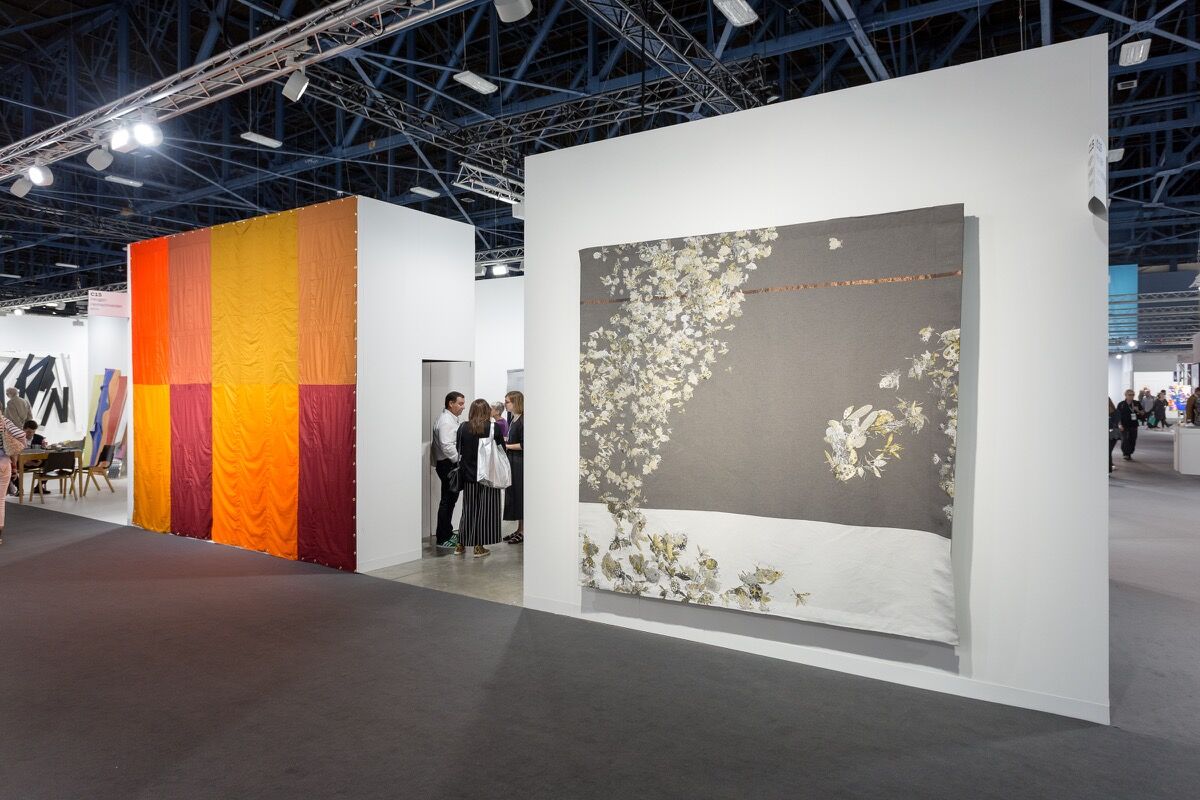 At Art Basel in Miami Beach, the gallery sold
Maya Lin
’s Silver Pearl (2015) for $150,000, several small
Joel Shapiro
sculptures for $125,000, two pieces out of
Tara Donovan
’s “Composition (Cards)” series from this year for $65,000, five works on paper by
Yoshitomo Nara
for $30,000–$65,000, a painting by
Nigel Cooke
for $50,000, and all available editions of
Leo Villareal
’s Cloud Drawing (2016) for $85,000 apiece. (Villareal, who Pace began representing in October, has continued efforts to bring additional tech industry leaders into the art-world fold, due to his prominence in that community following the Bay Bridge Lights project and his work at Burning Man.) The indication that collectors are broadening their demand once again is a positive one, following a persistent narrative over the past year or so of collectors fleeing to safe assets and blue-chip modern works that can serve as a store of value amid economic turbulence.
Ultimately, as Logsdail put it, “We’re in uncharted territory.” Hardly anyone would have projected eight months ago that Britain would be leaving the U.K. or three months ago that Donald Trump would be packing for the White House. And there is very little by way of a historical playbook as to what exactly will happen next. It will likely be at least a couple quarters before any new policy initiatives are fully implemented in the U.S. The same is true for how a post-Brexit Europe and U.K. will take shape. It will be longer still for effects to trickle down to the art market on either side of the Atlantic. The most successful galleries in these unpredictable times will be those with diversified programs and international reach. Barring particular erraticism, diminished policy uncertainty bodes well for the wallets of the wealthy. But until the feeling of potential foreboding subsides, much of the art market may not jump up in equal measure.
—Alexander Forbes
Related Stories