What Sold at Art Cologne? 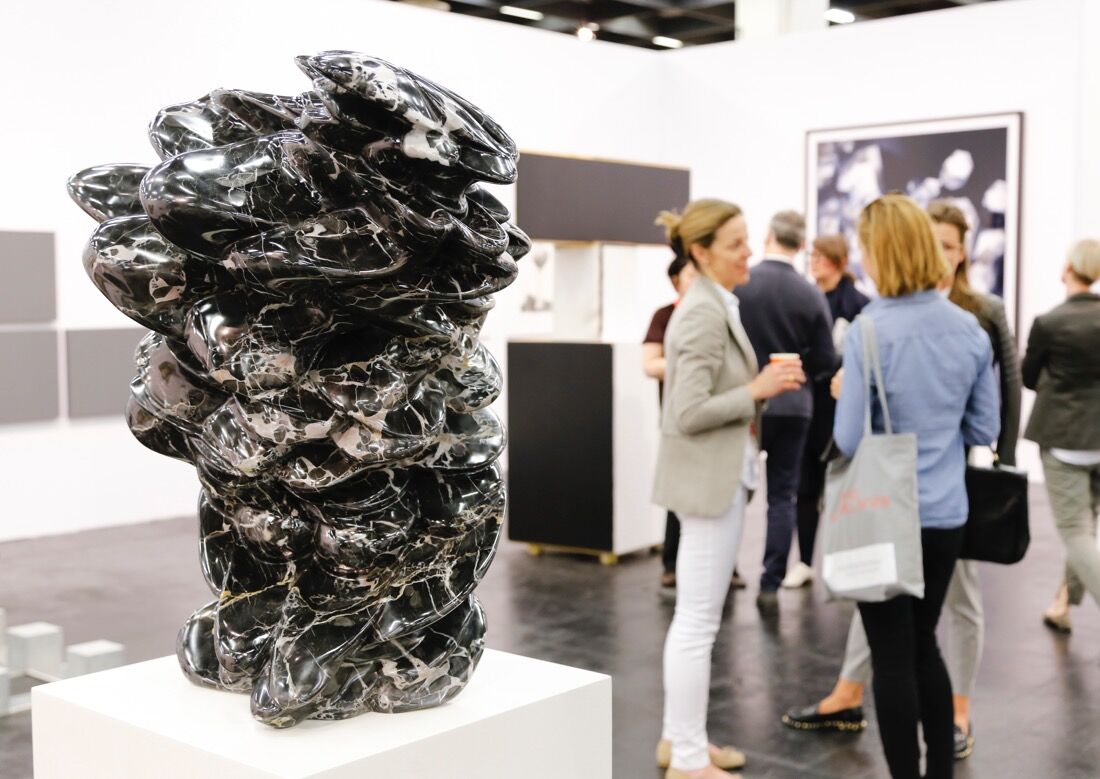 Leading the pack was Cologne’s Galerie Klaus Benden, who sold Andy Warhol’s Mona Lisa (four times) (1979) for $4.4 million. The dealer also sold a Roy Lichtenstein (Brushstroke (1968)) for €85,000 and a Tom Wesselmann drawing (Big Blonde) for €75,000. Benden was among those dealers moved to a new ground floor section for modern and postwar dealers at the fair, many of whom were skeptical about the move but quickly changed their tune as sales rolled in.
No other seven-figure sales were confirmed by the fair’s close (although the sale to a German museum of a late Kirchner, for which Samuelis Baumgarte was reportedly asking over €7 million, was in the works). But collectors in the modern section were comfortably snatching up works in the low-six-figure range. Zurich’s Galerie von Vertes sold a
Marino Marini
at €285,000. Galerie Maulberger put a nail painting by
Zero
star Günther Uecker in the hands of a collector for €280,000, also selling pieces by Otto Piene for €78,000 and €57,000. Next door, Galerie Utermann sold a Karl Hartung from the 1950s (Flügelform) for €180,000. Edith Wahlandt Galerie brought in €240,000 for an Ernst Hermann work and €180,000 for Norbert Kricke’s sculpture, Gelb – Weiß – Schwarz. 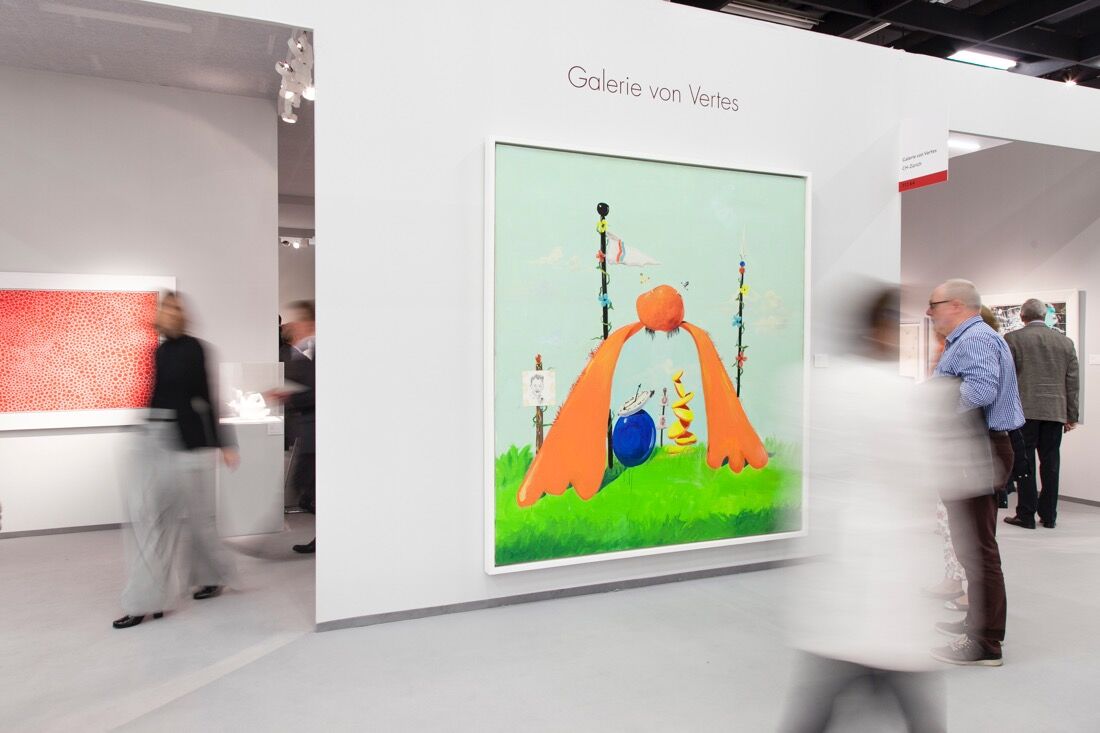 Such figures are the norm at Art Cologne. But the new layout made it such that 2015 was the fair’s best-looking edition in memory, particularly among the modern galleries but also on the second and third floors. Galerie Thomas’s Heike Grossmann—whose front-and-center booth was the standout downstairs—reported being particularly pleased with the change and noted more active buying on Thursday and Friday than in past years. The gallery saw a solid group of sales of their secondary market stock from €40,000–175,000. However, keenest interest was lobbed at a young artist in their program, Simon Schubert, whose folded paper pieces were flying off the walls for €2,500–8,500. 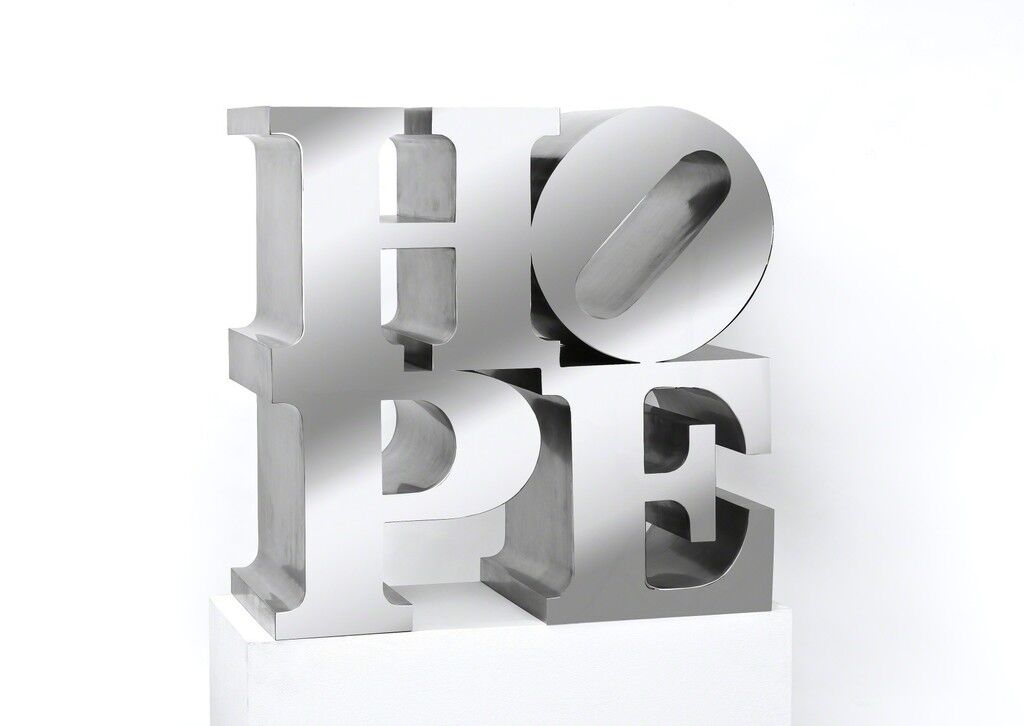 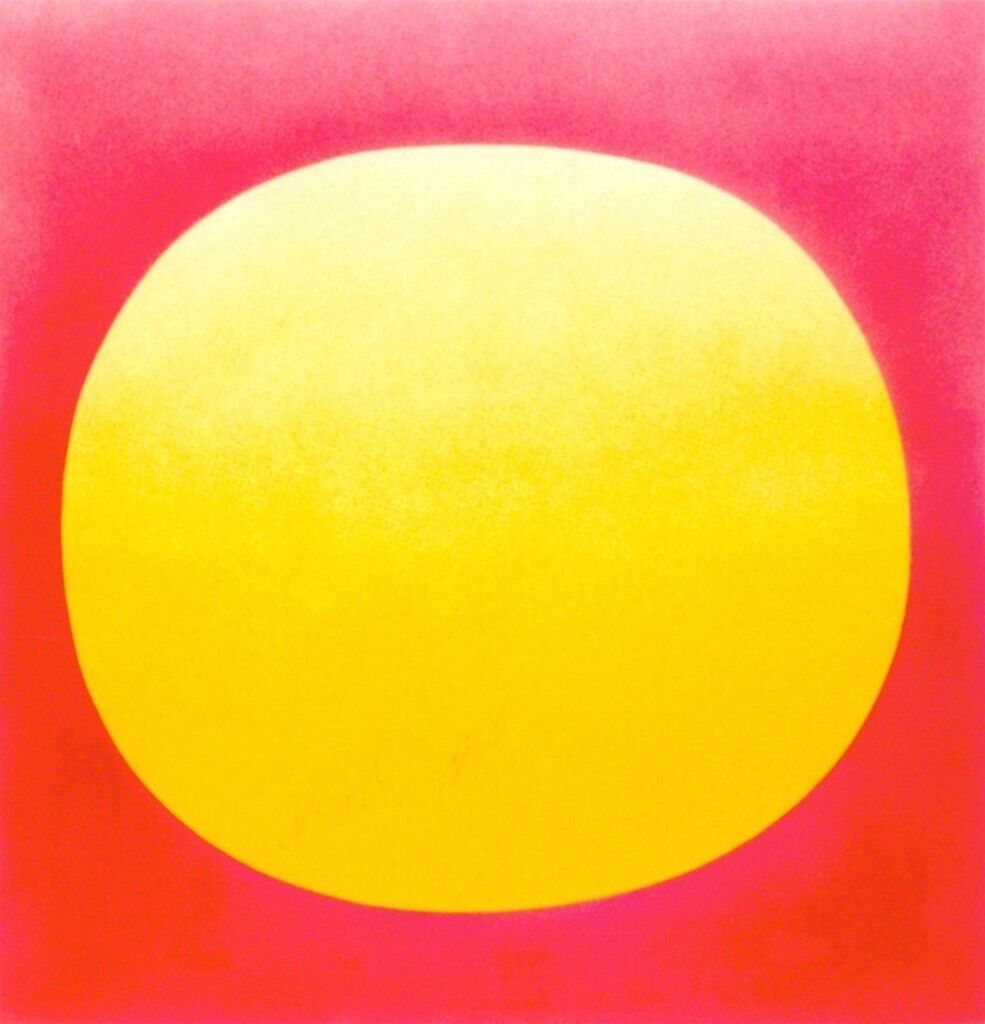 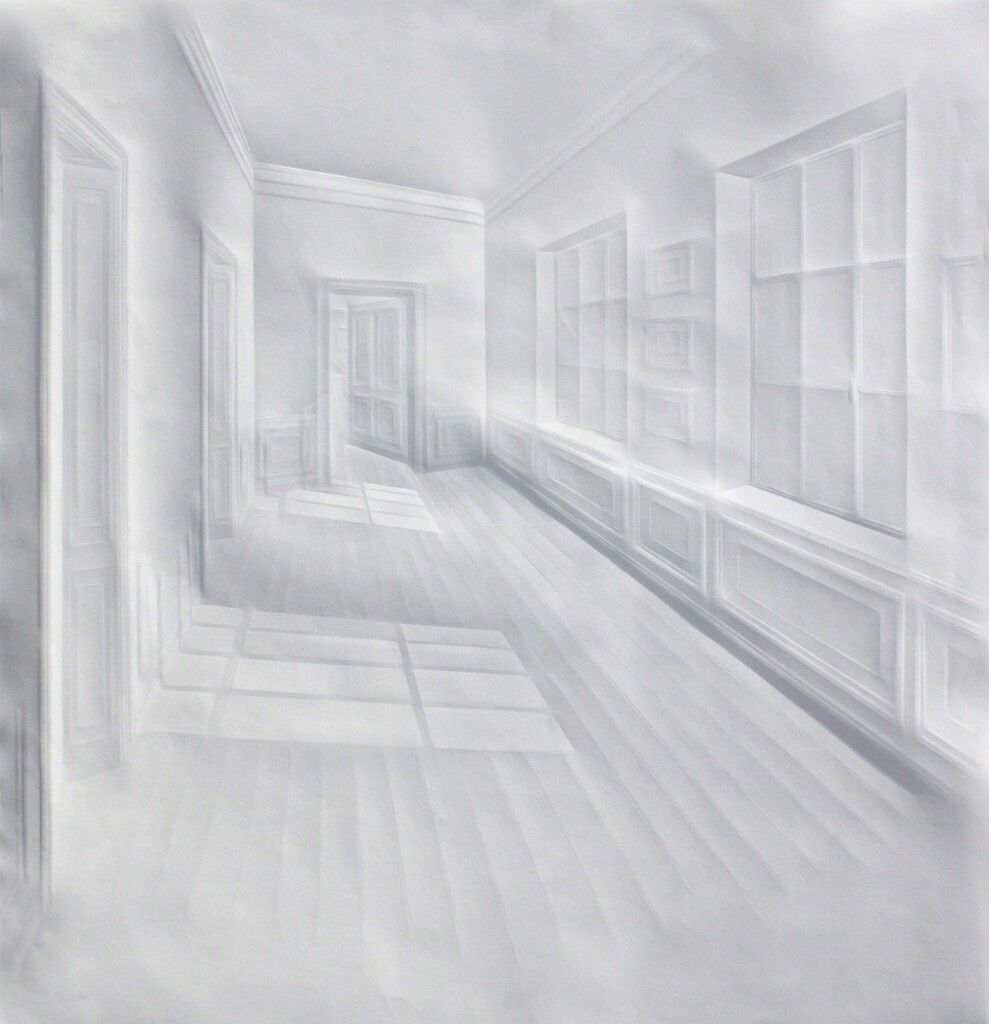 Simon Schubert
Ohne Titel (Licht in Flur mit Türen), 2015
Galerie Thomas
Advertisement
Grossmann and numerous other dealers throughout the week noted that these lower price point sales were derived from a new generation of collectors emerging from the Rhineland. It is this local region on which Art Cologne has always relied for its market power, but with the most prominent collectors now well into their seventies and eighties, many have stopped buying. (One dealer joked that many now come to the fair just to check in on the current price for a Richter or Baselitz similar to one they picked up for a pittance many years ago, prices now principally driven by foreign collectors.) There was a time several years ago when interest in collecting from this next generation was not a given, with dealers fearing that the young’ns would gravitate towards Panerais and Porsches rather than buy art. Luckily, that hasn’t been the case. 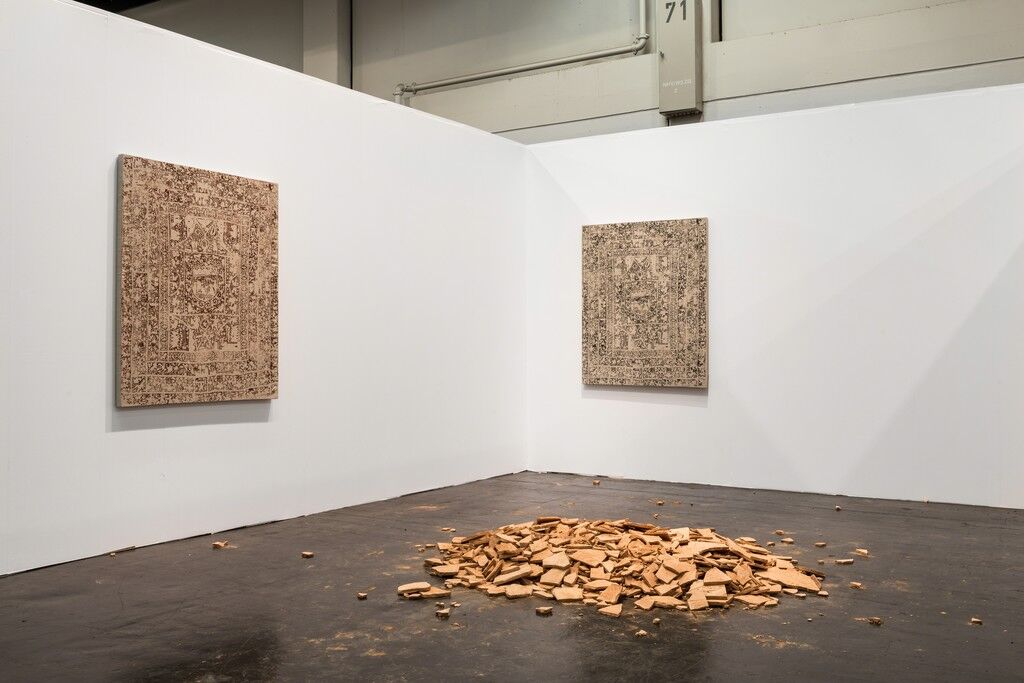 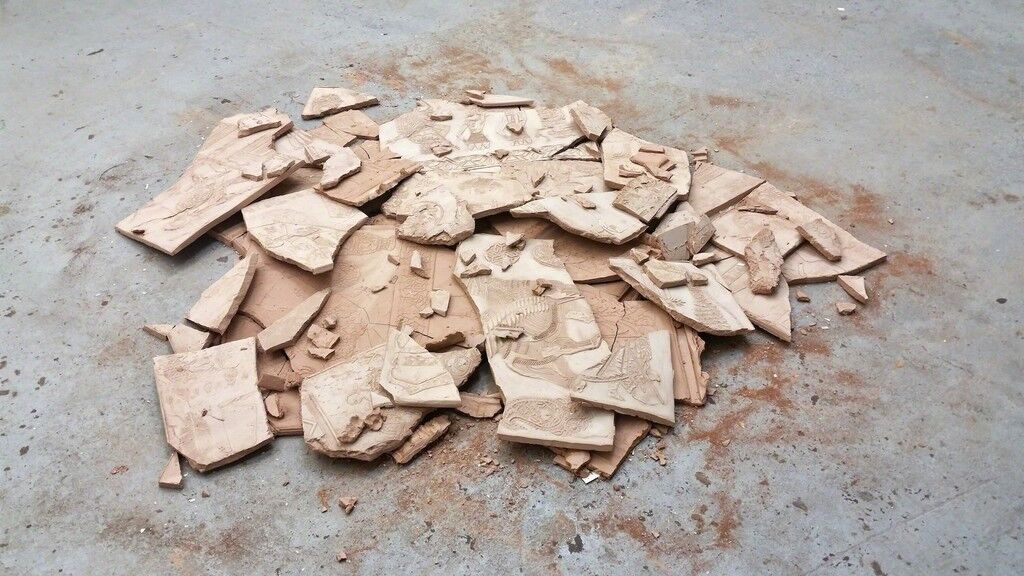 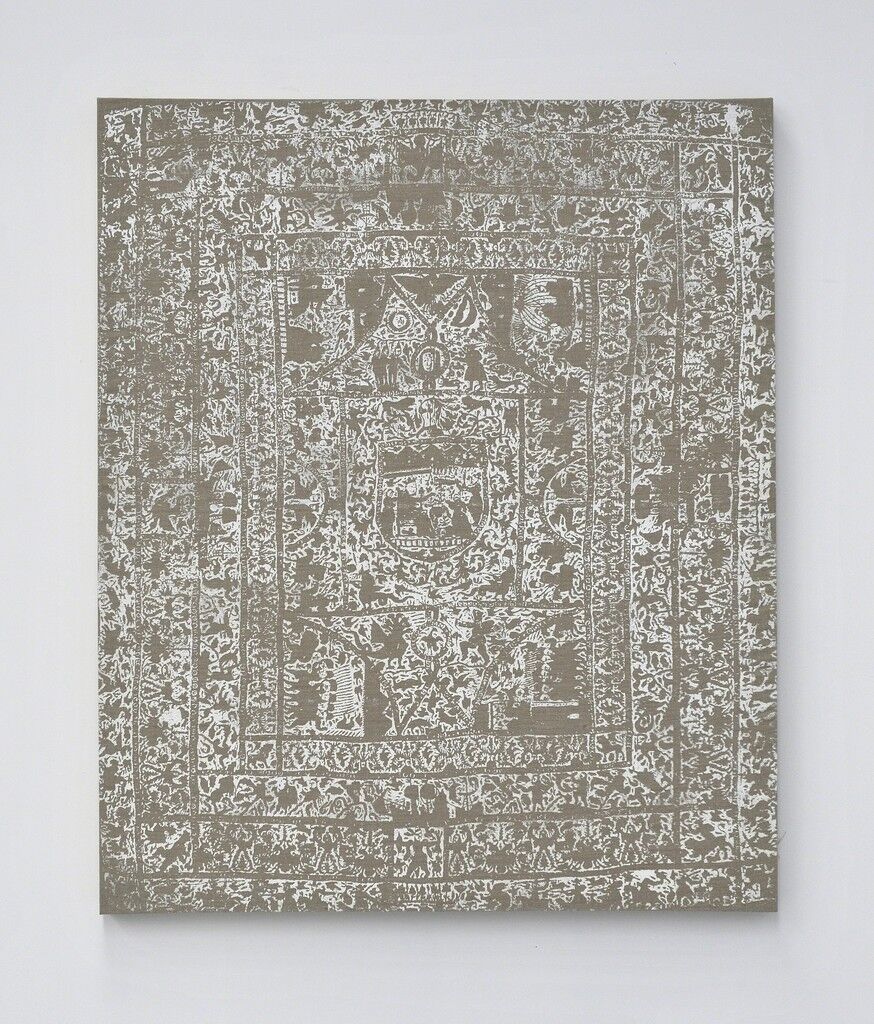 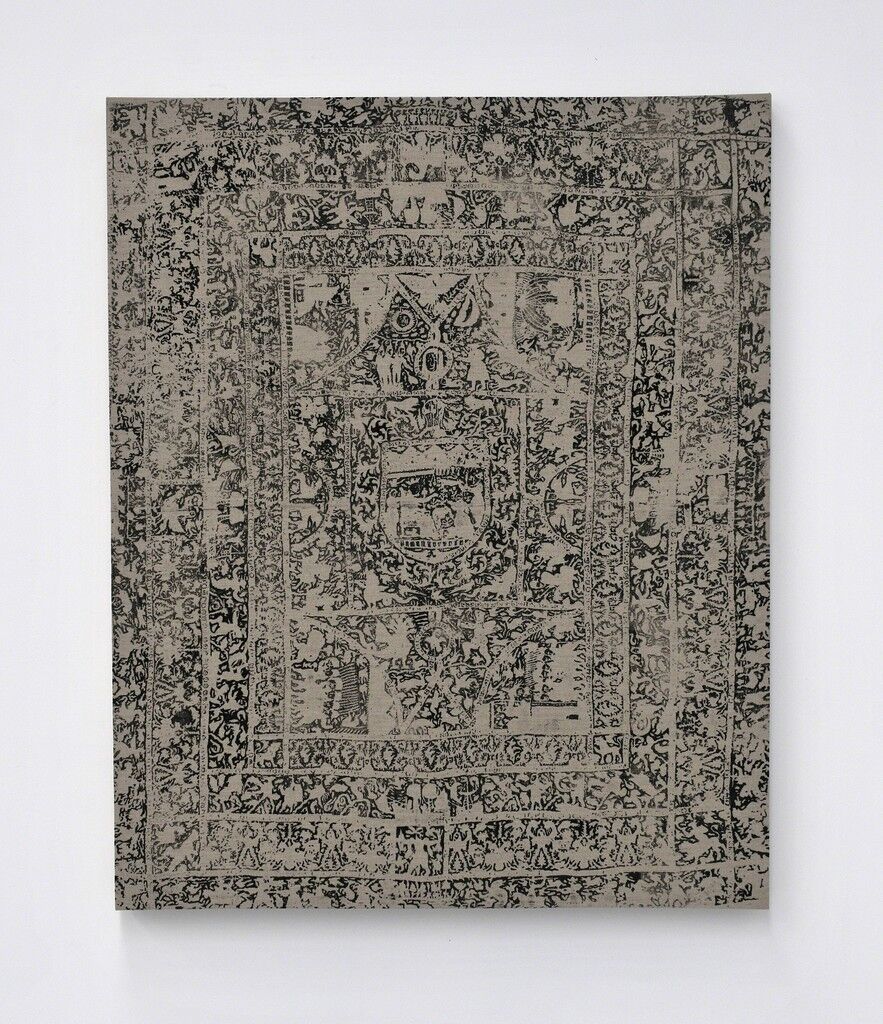 Kour Pour
Coverlet (Made in Bengal),, 2015
Ellis King
Throughout the week, those young collectors continued to drive strong sales of emerging art, as observed during Art Cologne’s preview. Dublin gallery Ellis King—which, despite what one might think looking at its roster and prominence on the international scene, only celebrated its first birthday this week—sold two paintings by British-Iranian artist Kour Pour for $45,000 each, as well as a sculpture (The lone and level sands stretch far away (2014)) for $15,000. Pour was one among many young artists with works available at Art Cologne whose markets are incredibly strong internationally but have yet to make a big entry onto the German scene. New York’s CANADA quickly sold out of their five
Matt Connors
works, riding momentum from his inclusion in MoMA’s recent survey of contemporary painting, “The Forever Now.” The three larger pieces were each priced at $45,000, the two smaller works at $30,000. 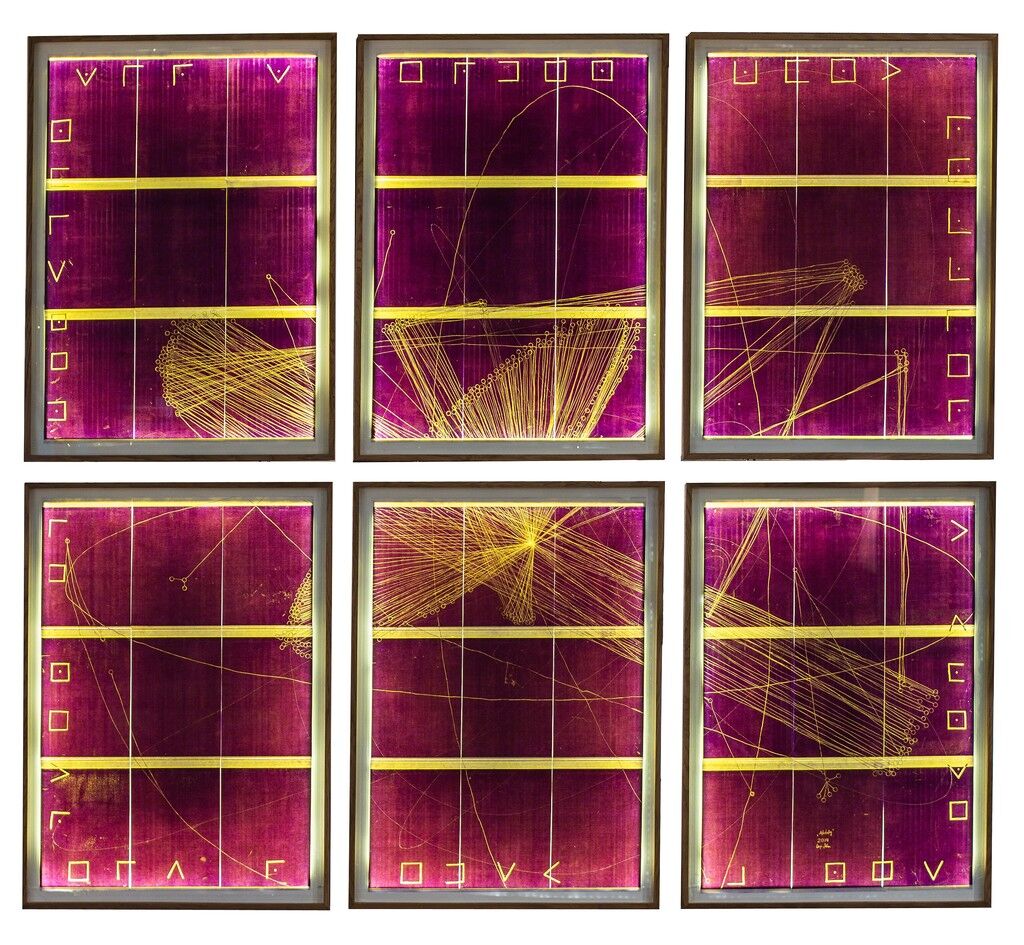 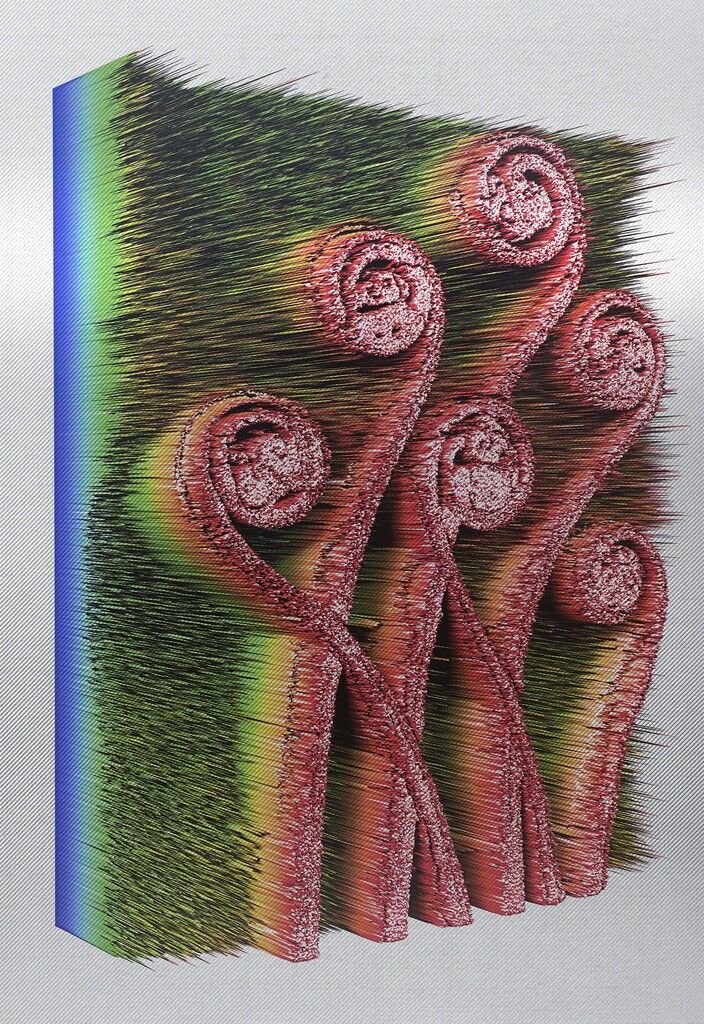 Spiros Hadjidjanos
Adiantum Pedatum, 2015
Future Gallery
Young Berlin-based galleries were the real darlings of the third floor, however. Future Gallery’s Michael Ruiz said they did particularly well with works by Spiros Hadjidjanos, whose 3D-printed wall sculptures were priced at €8,200 alongside new UV prints on carbon fiber at €6,100. The gallery also sold works by Jon Rafman, not exactly surprising considering the significant buzz around the artist at the moment. Soy Capitán sold three paintings by Henning Strassburger for €12,500 a pop as well as Benja Sachau’s six-part piece Astroturfing (2014) for €11,500. Following a stellar presentation at The Armory Show last month, Michael Müller drew significant collector interest at Aanant & Zoo, with two paintings being sold for more than €20,000 apiece. The gallery also sold numerous works on paper in specially designed frames by recent addition Max Schaffer for an impulse buy-able €1,100 each.
Other works friendly to those on a budget included sculptures of varying quantities of fried eggs by Christopher Chiappa, five of which sold from Kate Werble Gallery for under $1,000 each. (The gallery also sold a piece by Anna Betbeze for $14,000.) The Hole and V1 Gallery collaborated on a presentation of (among other artists) Rose Eken, who creates recreates everyday objects found in her studio—from nuts and bolts and markers to packs of cigarettes and ashtrays—in glazed clay. Priced starting at €20 for a small screw, they went like hotcakes. 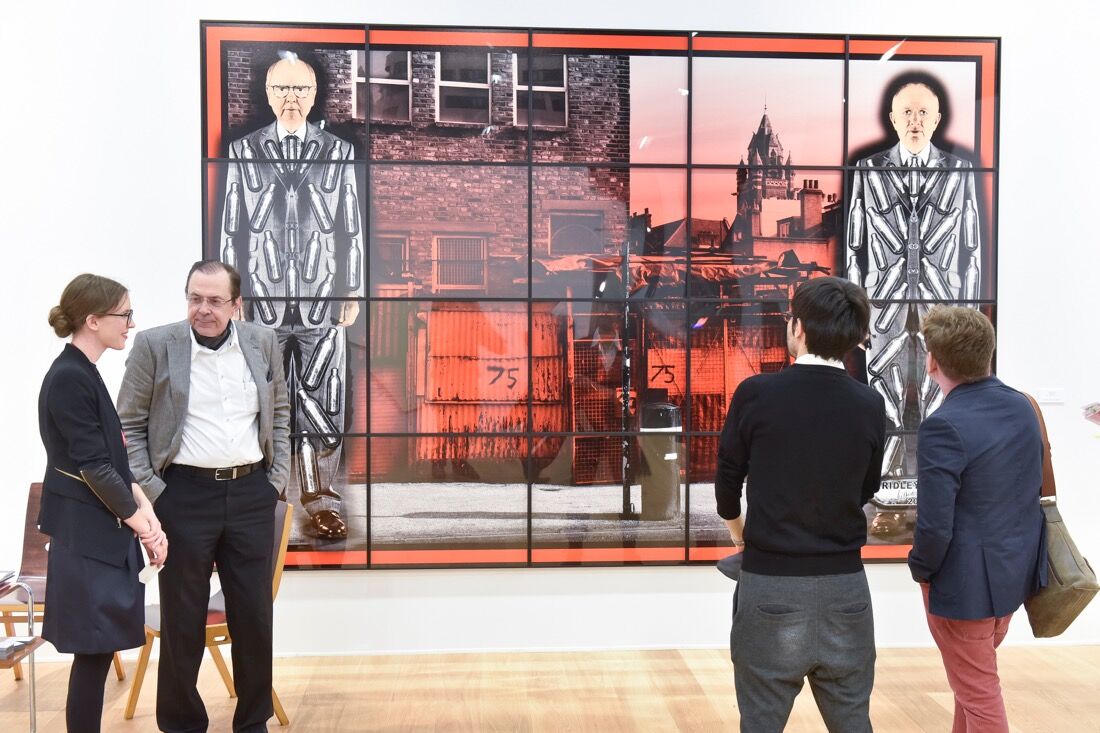 But the real proving ground for Art Cologne is its central floor of established contemporary galleries And there, too, good business was being done. Paris and Salzburg’s Thaddaeus Ropac was among the fair’s most successful, selling among other things, Robert Longo’s Untitled (Jet Fighter) for $425,000, a Baselitz painting for €400,000, two sculptures by Antony Gormley for £350,000 and £155,000, and a
Richard Deacon
sculpture for £110,000. Cologne native Galerie Buchholz’s results proved that interest in works by
Isa Genzken
remains as fervent as ever, her sculpture Schauspieler selling for €180,000 and another for €150,000. Berlin’s Galerie Eigen + Art reported having a very strong fair, the €140,000 sale of Stella Hamberg’s large bronze Hund (2013) topping the list. 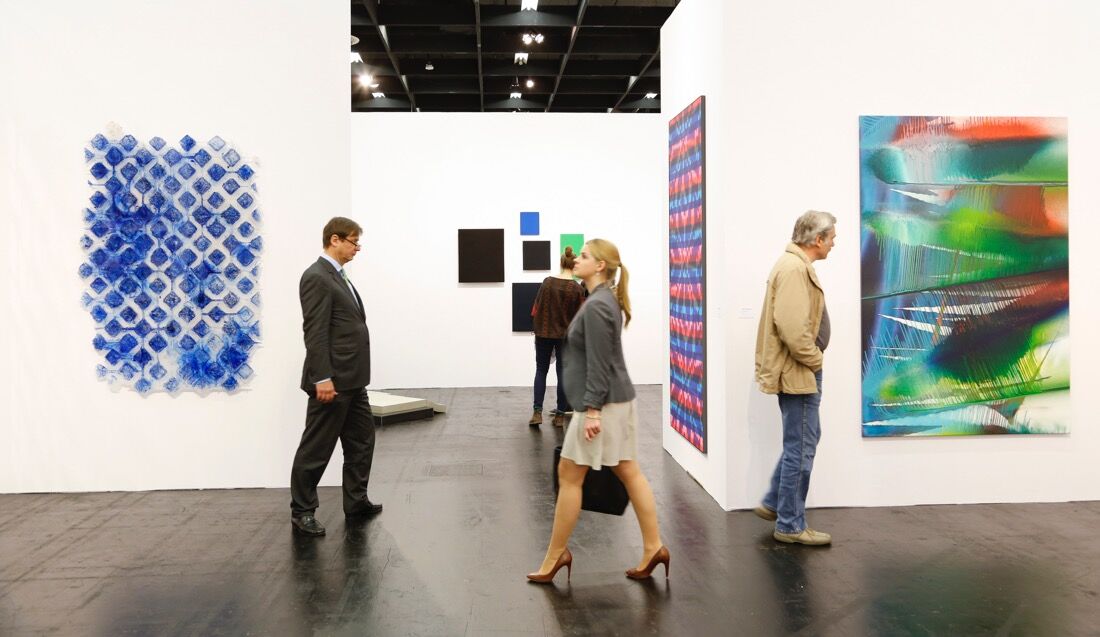 Collectors were notably tending towards works under (and generally well-under) the €100,000 mark. Vienna’s Galerie nächst St. Stephan Rosemarie Schwarzwälder racked up a lengthy list of sales including one painting and one sculpture by Katharina Grosse (for €60,000 and €50,000, respectively), two of
Daniel Knorr
’s new “Depression Elevation” works (€30,000 each), for which he casts the negative space in the sidewalk where puddles develop during rain storms, and one of three editions of his 70-part photographic piece Stolen History (2010) for €45,000. Blain | Southern sold the largest of three Lynn Chadwick sculptures that they brought to the fair, for which they were asking £60,000. The gallery also sold two works by Malian artist Aboulaye Konaté—who recently had a show at their Berlin outpost and has been a feature of their fair booths worldwide this spring—for €25,000 each. 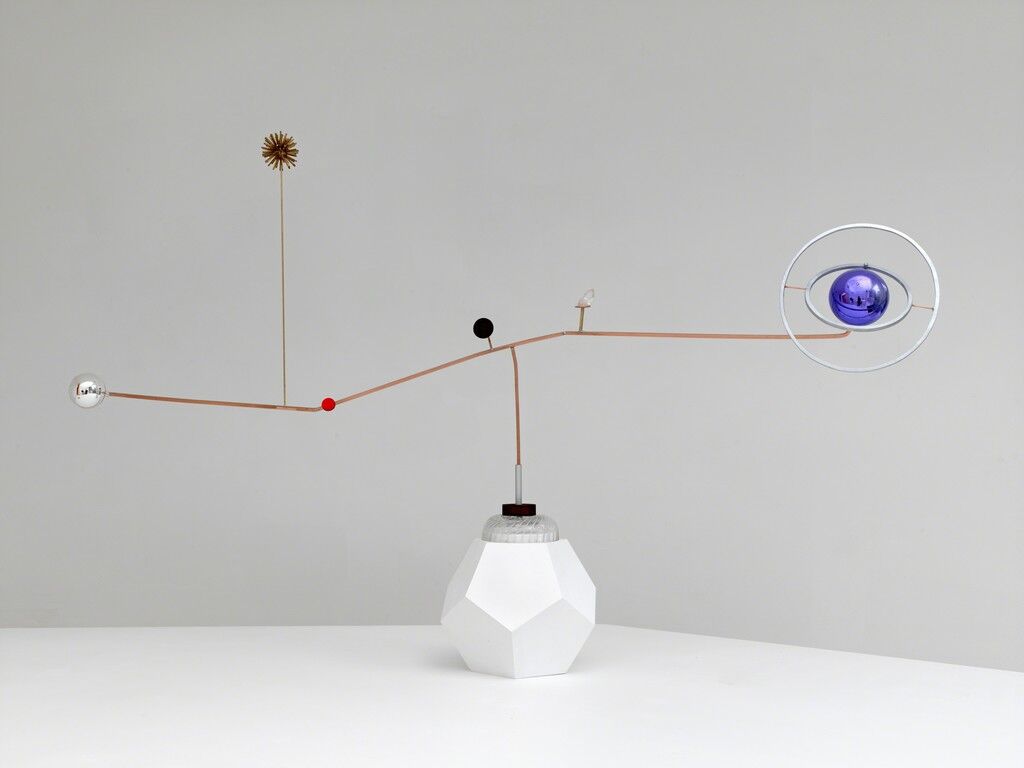 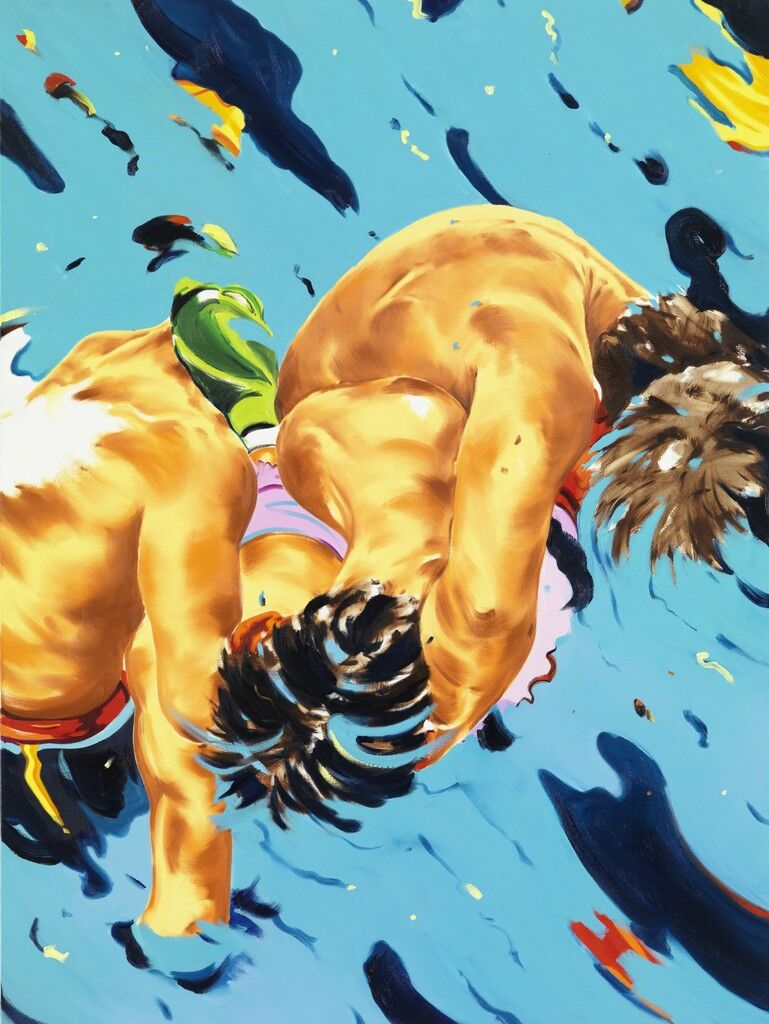 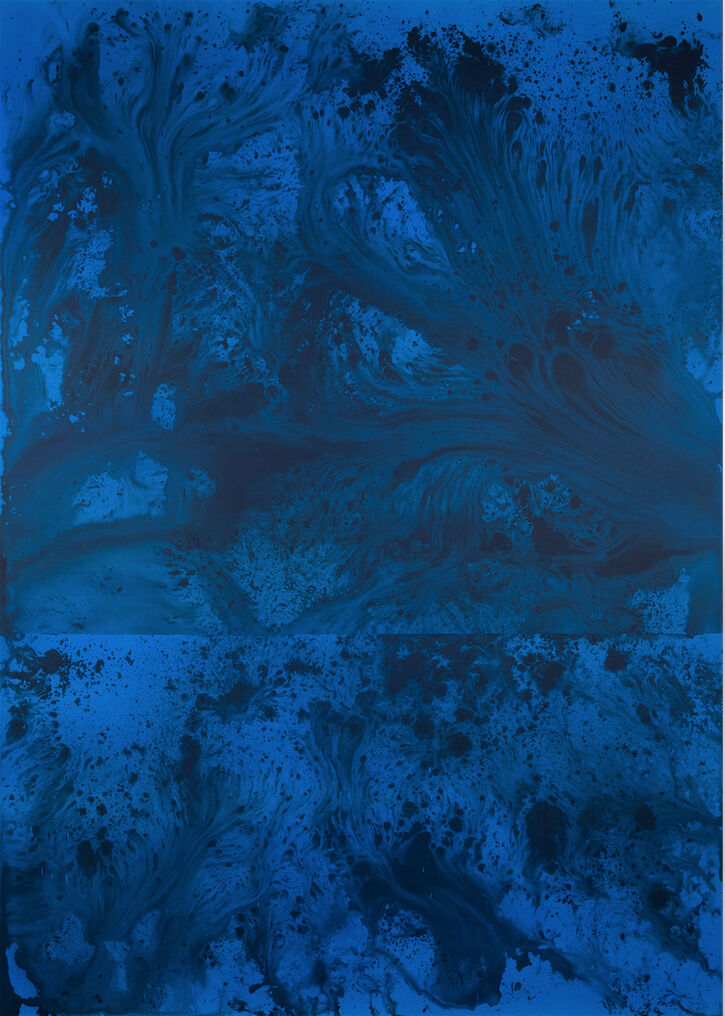 Sayre Gomez
Untitled Painting in Cerulean , 2015
Galerie Parisa Kind
By Saturday evening, Berlin’s Contemporary Fine Arts had sold six of the seven Borden Capalino paintings they had on offer for €20,000 a piece. Galerie Crone had similar success with works by Norbert Bisky and also sold pieces by Monika Grzymala and Marcel Odenbach. Düsseldorf staple Sies + Höke followed the low-price-point trend, selling out of Björn Dahlem’s sculptures, which each form a geometric shade around a lamp and were priced on the €10,000–30,000 range. Like Soy Capitán, they also sold a pair of Strassburgers for €10,000 and €12,000. Nearby, Galerie Parisa Kind sold a pair of Sayre Gomez pieces for $18,000 each.
Many dealers suggested that the lower price point favored by collectors this year was the result of new VAT legislation, which sees art sales in Germany to EU-based collectors—nearly all of those at Art Cologne—taxed at a rate of 19%. The increase in this rate from 7% actually went into effect in January 2014. However, as one dealer confided, due to the custom across the EU of including VAT within price tags (whether for art or otherwise), collectors may likely have mistakenly attributed the 12% or more rise in price in certain works from 2013 to 2014 to simply be a function of the art market’s aggressive growth. With this year’s buyers wisened up to this fact, several dealers suggested that they are now having to bear the brunt of that tax burden in order to negotiate a palatable price for the works with collectors. Furthermore, with the German art dealers association BVDG lobbying the government to approve a new tax scheme, in tandem with a private meeting held by a number of other prominent dealers on Saturday morning to devise their own strategy, collectors currently have an incentive to delay big-ticket purchases in anticipation that the legislation might soon be reversed. 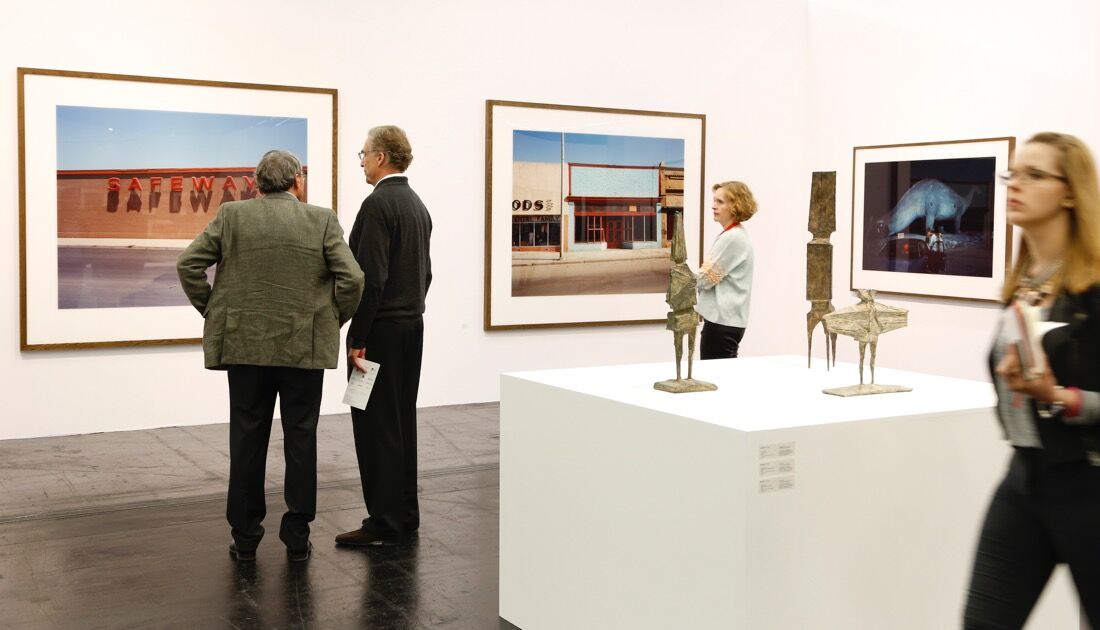 And, of course, that’s just one of two macroeconomic factors currently working against fairs with numerous international participants—but mostly regional collectors—like Art Cologne. With the euro worth around 30 cents on the dollar less than it was at this time last year, works priced in dollars are effectively 27% more expensive this year for a European collector (assuming they don’t have some greenbacks stashed away somewhere). The state of play should have the NetJets hotline ringing off the hook for flights to Basel from the U.S. coasts—those collectors would have been smart to make a similar call and come to Cologne this past week. For the galleries, however, it’s reintroduced a level of uncertainty (and need for some creative forex trading and knowhow) that was out of the picture for the past 10 years.
Under these circumstances, the fact that Art Cologne was able to achieve the results it did is all the more impressive. It also suggests that the art market here is far more stable and able to react to changing conditions than those who have recently been calling for the “bubble” to burst have suggested. With the fair’s 50th edition on the horizon for next year, it has reached a new level of stability in its place atop the German art market and one that looks unable to be challenged for many more editions to come.
Alexander Forbes is Artsy’s Consumer Marketplace Strategist. He was previously the Executive Editor of Artsy Editorial.
Explore Art Cologne 2015 on Artsy.
Related Stories