What Sold at EXPO CHICAGO 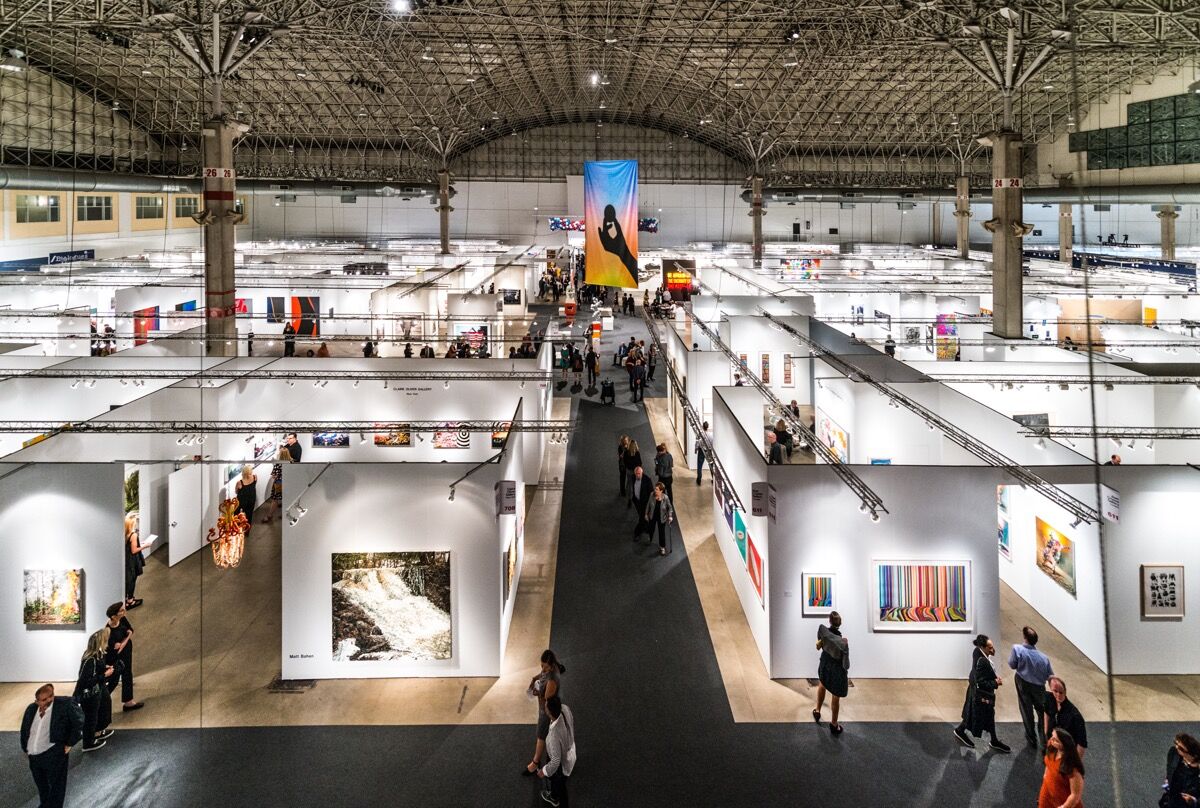 EXPO CHICAGO came to a close on Sunday, having welcomed 145 galleries to the city’s historic Navy Pier. This year marks the fair’s fifth and largest edition since president and director Tony Karman resurrected the long-running but faltering Art Chicago in 2012. And based on the reactions of returning dealers and those among the fair’s 35 new exhibitors, EXPO certainly didn’t disappoint.
“Chicago hosted the only international art fair in North and South America for 20 years,” said Karman on Saturday afternoon of the city’s lynchpin role in the early years of the modern-day art market. “It is seminal to the fabric of the city and can’t be lost.” Despite the city’s rich history of radical art movements, arts patronage, and some of the United States’s best institutions, Chicago had largely fallen off the art world’s ever-widening radar until several years ago. This year, on behalf of the city’s collectors, curators, artists, and institutions, Karman said, “We feel a renewed pride.”
His enthusiasm checks out. A rush of the world’s top collectors and curators—Hans Ulrich Obrist, Simon Castets, Anita and Poju Zabludowicz, Toby Kamps, Jorge Pérez, and every curator from the MCA among them—were seen scouring EXPO CHICAGO’s aisles throughout the week. Dealers reported a quality of face time with heavy-hitters not always feasible at other major fairs. “The biggest impact is this cultural exchange it fosters in Chicago,” added Karman, who was knighted and received the Chevalier des Arts et des Lettres during the announcement of the fair’s upcoming 2017 partnership with Palais de Tokyo and the Institut Français on opening day.
EXPO CHICAGO fell just over a month before the most high-stakes U.S. presidential election in recent history—and amidst continued reports of a slowdown in the art market. (Brussels’s MOT International, a previously listed exhibitor who quietly closed up shop over the summer, was noticeably absent from the fair.) Dealers across Navy Pier pointed to the fair’s leisurely pace. But its notorious slow burn appears to be driven—at least in part—by the proclivity of Midwestern collectors to take their time in making acquisitions. “I tell exhibitors to be prepared for that,” said Karman. “Even when there were only five fairs in the world, the tone and pace was measured, thoughtful, intellectual, considered. All of those things are very much the hallmark of this fair.” 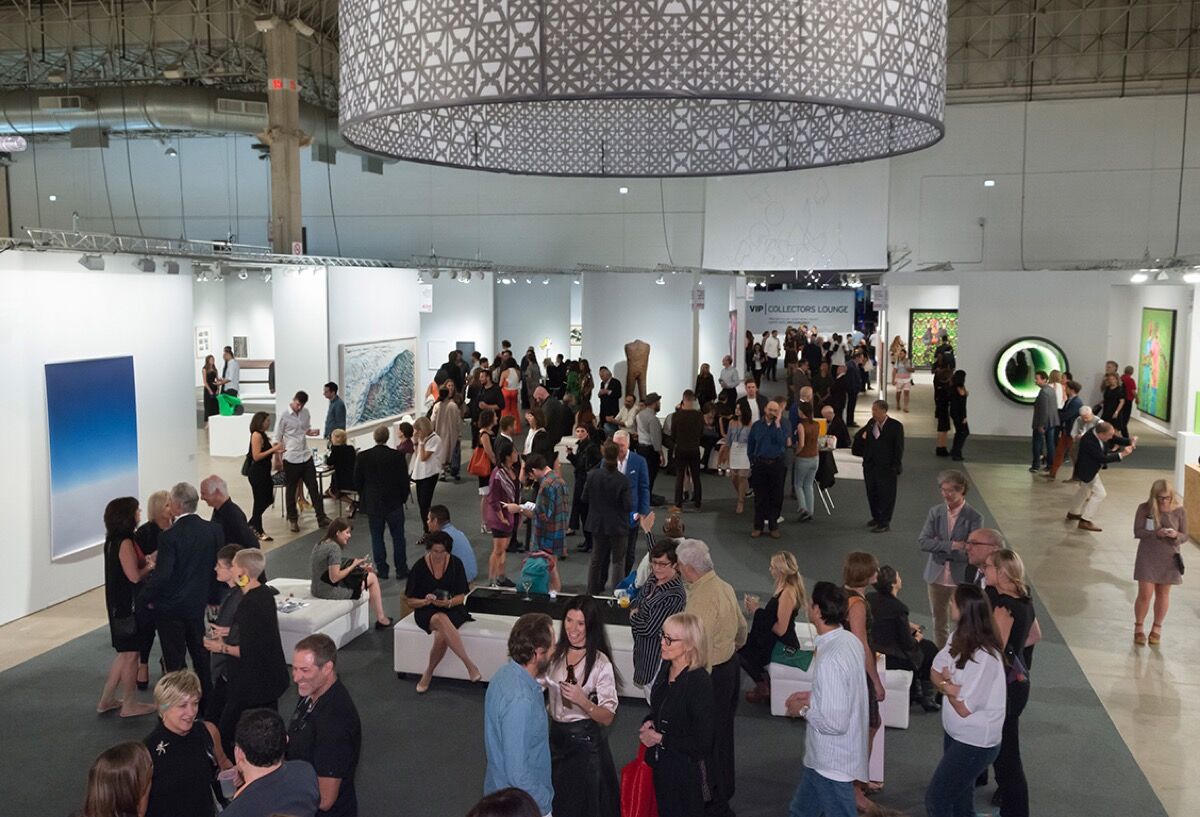 Despite that slow build, which saw collectors and curators trickle in through the weekend (perhaps some wrapping up the work week before traveling from Kansas City, Houston, Milwaukee, or St. Louis), a number of dealers reported six-figure sales on opening day. Leading the pack was Paul Kasmin Gallery, who placed
Roxy Paine
’s Maquette for Centrifuge (2014) with a New York private collector for $225,000. In its first showing at EXPO since 2012, the New York gallery later sold
Iván Navarro
’s DEAF (prototype) (2016) to a Los Angeles-based collector for $50,000, two newly-commissioned paintings by
Mathieu Mercier
for €22,000 apiece, and
Bernar Venet
’s large sculpture Indeterminate Line (2013) for $450,000. “The market is fairly discreet in the Midwest, but they’ve opened up,” said Paul Kasmin senior director Denis Gardarin of an outing that he characterized as “much better” than previous trips to Chicago. Gardarin added that, given the current market slowdown, this success can be attributed to collectors’ security in investing in the gallery’s brand name.
Amsterdam’s GRIMM gallery kicked off its maiden voyage to EXPO CHICAGO with the sale of
Matthew Day Jackson
’s August 6, 1945 (Chicago) (2016), which went to a European collector for $175,000. The wall-hung sculpture continues Jackson’s series in which aerial images of Hiroshima post-atomic bomb are mapped onto 3D models of a variety of cities, Chicago, with its Great Chicago Fire of 1871, being a fitting inclusion. The gallery also placed a painting by
Matthias Weischer
with a European collector for €47,000, four large photographs from
Dana Lixenberg
’s 1993-2015 “Imperial Courts” series at around $10,000 a pop, and
Eric White
’s painting Down in Front: No Other Dream™ (2014–2016) for $35,000. Director Sebastiaan Brandsen said that the gallery “had some great response from local collectors,” but as of Saturday afternoon, “none of the works will be staying in the Midwest.”
The fair’s EXPOSURE sector, which offered 26 younger galleries the opportunity to curate solo or duo artist presentations, saw a number of first-time exhibitors in high spirits. New York’s Half Gallery had placed eight of nine paintings on view by Dublin-based artist
Genieve Figgis
by the stroke of 6 p.m. on opening day. Of those sales, on the range of $12,000–20,000, one painting went to a local museum trustee. “Obviously Genieve is more of a known entity, but I think locally and regionally, most people have probably never seen her work in person,” said owner Bill Powers of the decision to show Figgis, whose beautifully macabre, dripping, and swirling paintings have garnered a major following in New York and Europe.
New York’s The Hole also saw success in the EXPOSURE sector. The gallery, notorious for creative fair presentations, installed a solo booth of sculptural, abstracted portraits by Los Angeles-based artist
Vanessa Prager
—including two paintings each only visible through peephole. Several of the artist’s smaller works were snatched up on opening day for $2,500 apiece. “The fair has been building in momentum, and we wanted to hit the Midwest,” said director Raymond Bulman, who later noted the sale of the booth’s largest work, Green is My Valley (2016), which went to a Chicago-based collector for $16,000. 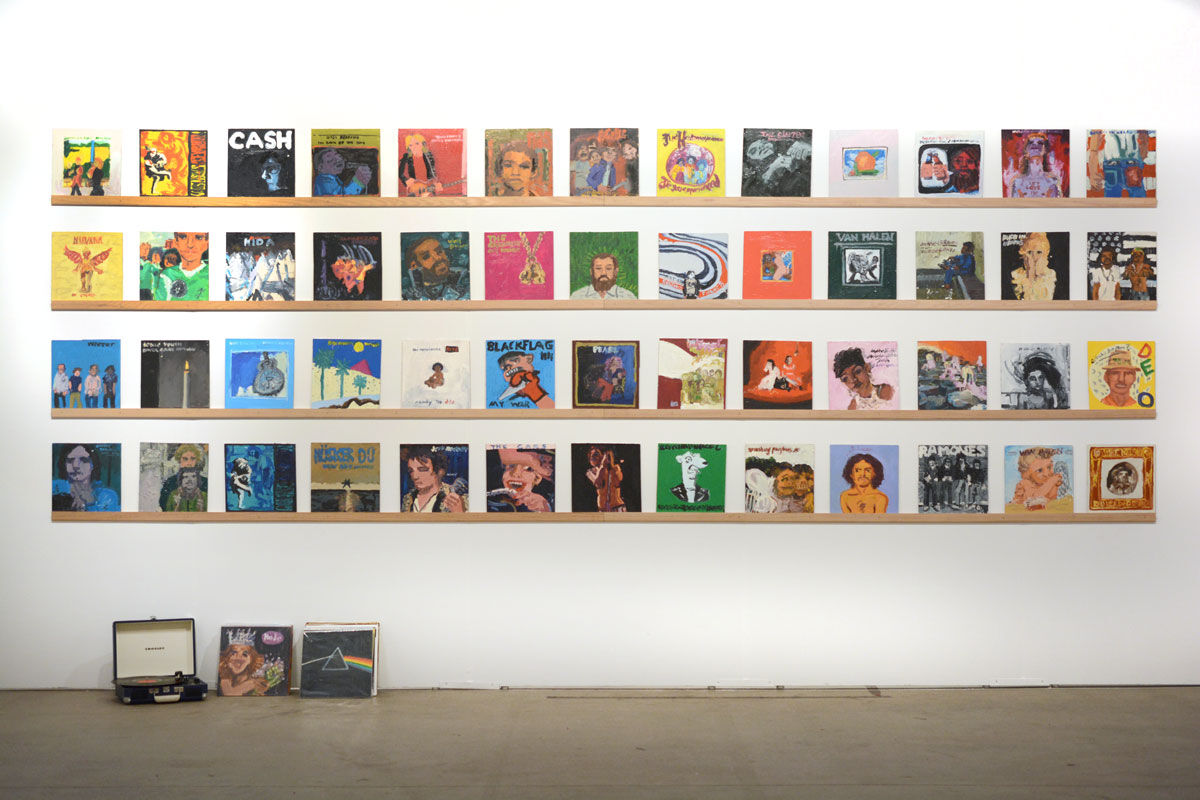 Advertisement
EXPO CHICAGO’s youngest gallery, Yours, Mine & Ours (which opened in New York’s Lower East Side on September 11th) had a successful first-ever art fair outing. Their booth’s walls were lined with to-scale paintings of album covers by artist Brooklyn-based
Todd Bienvenu
. (Albums by The Misfits, Aretha Franklin, Nirvana, and James Taylor were among them.) “Chicago is a music town, so we wanted to create this record store atmosphere,” said gallery co-founder RJ Supa, who showed at EXPO CHICAGO last year with his former gallery Louis B. James. By Saturday afternoon, around half of the works from the series of 100 had sold at $1,400 a pop. Supa noted that most sales took place after 5 p.m.—likely after work hours.
Los Angeles gallerist David Kordansky returned to EXPO CHICAGO having not participated since his gallery’s first-ever art fair, at Art Chicago in the early 2000s. He and gallery director Mike Homer pointed to the market’s slower pace as an opportunity to bring work that requires greater dialogue: in this case, a standout booth of recent work by two radical octogenarians,
Betty Woodman
and
Sam Gilliam
, who are just starting to get their due. According to Homer, “People are more thoughtful about what they are buying,” looking at artist’s track records and institutional support before making a purchase. Kordansky added that Chicagoans have long displayed “bold, brave, fearless thinking” in their support of forward thinking, and risk taking, from the
Imagists
to the Surrealists.
By Saturday afternoon, Kordansky had sold three paintings from Gilliam’s 2015 “PARADE” series, priced at $55,000 each, to collectors from New York and Chicago. (The latter sale was initiated with the help of the MCA.) The gallery also placed one of three painted ceramic and wood sculptures by Woodman, Vase Upon Vase: Horme, (2009–2014), with a Chicago-based collector for $45,000. 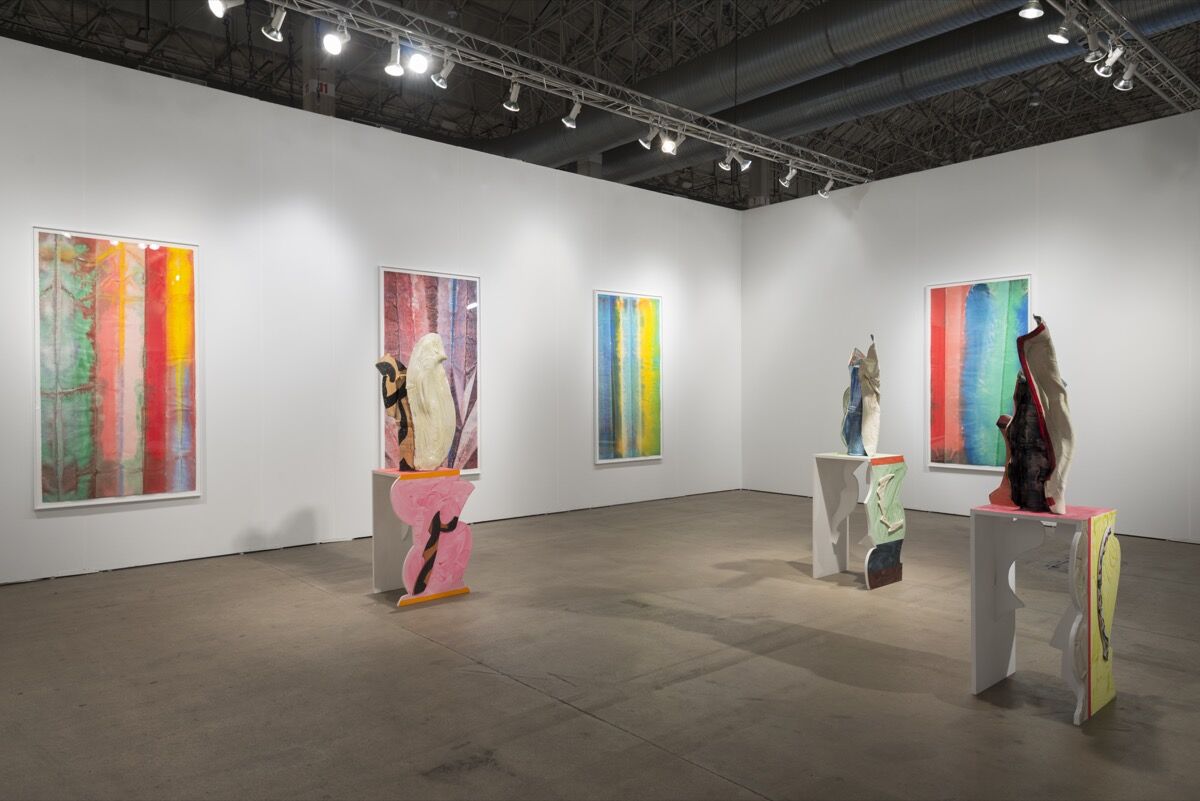 Major collectors were also back in Chicago this year after significant stretches away. “I went to the first edition of the Chicago fair many years ago,” said Beth Rudin DeWoody, who unveiled a fantastic exhibition of works from her private collection—with a particular focus on Chicago artists, from the Hairy Who to
Kerry James Marshall
—at the Peninsula Hotel on Friday. Back this year thanks to Karman’s encouragement, DeWoody said, “It was a great fair; a lot of things to buy and a lot of vitality.” On opening day, the collector had acquired a beautiful wooden altar piece by young African-American, Chicago-based artist
Nate Young
at moniquemeloche  (Untitled (Altar No. 12), 2016), a work on paper by
Jim Hodges
at CRG (No Title, 1988), an ink wash drawing by
Lucas Samaras
at Pavel Zoubok (Head #136, 1983), and two mixed-media collages by
Phyllis Bramson
at nonprofit Artadia.
Chicago gallerist Kavi Gupta suggested that EXPO is helping foster a renewed interest in collecting in the city. “The art fair’s first editions in the ’80s built all of the collectors here,” he said. “But then a generation was skipped, in a way.” Today, he says, a new generation of young collectors in their thirties and early forties is emerging in Chicago—and the revived fair is no small part of that. “For all of the young tech pioneers of Chicago who’ve made a lot of money, and real estate people, the fair is the easiest way for them to get an entree into the art world,” he said. From those hailing from J.B. Pritzker’s tech incubator 1871 to those from GrubHub or Groupon, the city is ripe with young connoisseurs who are looking to learn about art. Gupta added that this group was out in full force on opening day: “After four or five years of the fair, they’re collectors now; they’ve got the bug.”
As of Sunday morning, the gallerist had reported strong sales across the booth, including two works from a fantastic display of sculptures by
Jessica Stockholder
, two pieces by
Glenn Kaino
, all six works on offer by
Manish Nai
, and works by
Clare E. Rojas
and
Mickalene Thomas
, among others. Surely, it was a proud weekend for the Chicago native, who also opened a two-man exhibition featuring
Roger Brown
and
Andy Warhol
at his gallery space. “To see the art world outside of the coasts is so rewarding,” said Gupta. “To get recognized art often has to go one piece at a time to an art fair somewhere else—so this is kind of our ‘aha moment.’”
Molly Gottschalk is Artsy’s Lead Visuals Editor.
Related Stories