Outside view of the Grand Palais. Photo by Marc Domage, courtesy FIAC.

Just days after a high-volume edition of Frieze London and Frieze Masters came to a close, the art world hopped on the Eurostar for the 42nd edition of FIAC. Held under the glass ceiling of Paris’s Grand Palais, the fair welcomes 170 galleries from 22 countries in 2015—down from 191 in 2014, with reductions having allowed for larger booths, particularly upstairs in the section for younger galleries. By all accounts, in Paris, the market continued at the rampant pace set during Frieze Week, shrugging off expectations of a slow fall season.
As opposed to Frieze’s steady stream of sales, FIAC took a more top-heavy rhythm this year, with a flood of sales reported to have taken place during its exclusive morning preview. Among those reporting some of the heaviest volumes of early action was Thaddaeus Ropac, who hung a nearly monochrome stand of works by
Georg Baselitz
,
Robert Longo
,
Tony Cragg
, and
Alex Katz
, among others. A pair of large Longo charcoal drawings (Untitled (Misty Forest), 2011 and Untitled (X-Ray of The Mona Lisa, c. 1503-1519, After Da Vinci), 2015), a less-than-week-old sculpture (Bündel, 2015), and a painting (Oggi viola domain viola da gamba, 2015) by Baselitz, and a painting (Cinq Tigres, 2015) by
Yan Pei-Ming
were among the first and priciest works to sell. “It was amazing,” said the gallery’s José Castañal of the fair’s first hours. “There were a lot of people but they were really of the highest level. FIAC keeps getting better.”
Aside from the expected set of international art fair loyalists—like Susan and Michael Hort, Alain Servais, and Stefan Simchowitz—and cohorts from the major Pinault and Arnault French collections, the Qataris were reportedly in town for FIAC this year and picking up new pieces for their formidable collection. Some dealers and collectors suggested that the preview remained overcrowded, but none failed to mention that the audience itself continues to improve.
“In the past, the audience of FIAC was not of this quality,” said Parisian art adviser Laurence Dreyfus the morning after the preview. For the tenth year in a row, the adviser mounted a collateral exhibition, “Chambres à part”—featuring artists such as
Olafur Eliasson
,
David Altmejd
,
Anish Kapoor
, and
Ryan Foerster
—in an apartment just off the Trocadéro. “Perhaps because of the exchange rate between the euro and dollar, I saw many more Americans than before,” added Dreyfus. “The collectors are much more informed and cultured than they were ten years ago. Yesterday was a connoisseur audience.” Dreyfus, herself, reported picking up a piece by Altmejd from Andrea Rosen for a client. At a fair the quality of FIAC, informed collectors make for the best buyers. And, as such, White Cube logged “just under £1 million in sales on the opening day,” according to the gallery’s Sharis Alexandrian, including works by
Etel Adnan
,
Imi Knoebel
, Baselitz,
Sergej Jensen
,
Eddie Peake
,
Mona Hatoum
, and
Theaster Gates
.
Over at Hauser & Wirth’s stand, which Paul Schimmel curated in homage to the Charlie Hebdo terrorist attack, things also got off to a pacey start.
Isa Genzken
’s untitled mannequin sculpture from 2012, which recalls revolutionary movements in Germany, led the pack, selling for €200,000. Works by
Mark Bradford
,
Mike Kelley
, and
Philippe Vandenberg
were also transacted upon during opening day. 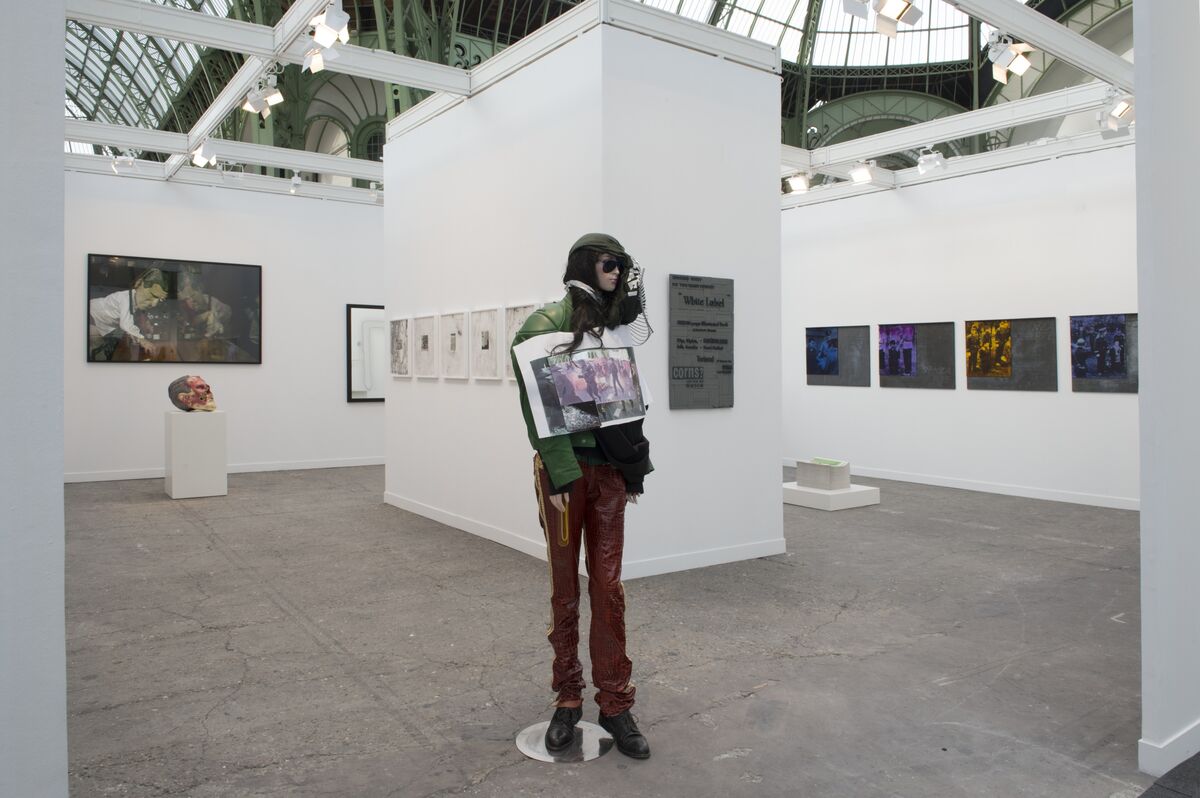 Advertisement
Sprüth Magers also made an early splash, selling
George Condo
’s Large Female Portrait (2015) to an American for $600,000. In light of the recent red-hot market for young painters making surrealist-inspired work, the painting screams out “anything you can do I can do better.” Condo’s 2012 bronze, The Philosopher, sold to a Middle Eastern collector, with the gallery also reporting the sale of multiple
Louise Lawlers
for between $10,000–85,000.
Gordon VeneKlasen of Michael Werner reported FIAC being “particularly good for us this year,” having sold several works by
Gianni Piacentino
(ranging from $50,000–350,000),
Markus Lüpertz
,
A.R. Penck
, Baselitz, and
Enrico David
, by Thursday afternoon. Piacentino’s Dull Orange Portal I (1966) is of particular note. “It was acquired by
Lucio Fontana
but then he died so it ended up staying in the studio,” said the gallery’s Gyonata Bonvicini of the work. Though not particularly forceful in its penetration of FIAC stands, Asian art is having a moment in Paris this week. A new fair, Asia Now, made its debut with the intent of fostering greater dialogue between the French capital and the East. “France has always been key site for Chinese art,” said Ullens Center of Contemporary Art director Phil Tinari when he and UCCA founder Guy Ullens stopped by FIAC on Wednesday afternoon. “You had one generation of artists who came here in the ’80s, another generation who came right after ’89 and many of them stayed.” Tinari and Ullens helped realize the new fair.
Kukje Gallery founder Hyun-Sook Lee earned a spot on ArtReview’s Power 100 on Thursday morning for her role in promoting similar dialogue between East and West. The gallery, which shares a stand with Tina Kim Gallery, had sold pieces on the range from $60,000–350,000 as of that afternoon, with works by
Ha Chong-Hyun
selling particularly well at FIAC. “People are really interested in looking for new gems other than most well known artists, like
Lee Ufan
and
Park Seo-bo
,” said Tina Kim’s Sophie Beeftink.
Across the rest of FIAC’s main floor, sales were steady. “We’re very happy,” said Almine Rech senior director Jason Cori of the fair, adding that they sold “the most important works on the stand,” including pieces by
Richard Prince
and
Julian Schnabel
for between $50,000–350,000, as well as works by
Jean-Baptiste Bernadet
and
Brian Calvin
.
Galerie Krinzinger sold a
Thomas Zipp
painting for €42,000 in the fair’s first half hour, a
Jannis Varelas
for €19,000, and a
Secundino Hernández
for €40,000. “There is such a long waiting list, it’s not a surprise, but it went to a very good collection,” the gallery’s Thomas Krinzinger said of the Hernández sale. Meanwhile, next door Galerie EIGEN + Art sold four works of varying size by “local hero”
Marc Desgrandchamps
for €8,500–45,000 and a mid-sized
Tim Eitel
piece, according to director Christian Ehrentraut, who recently closed his own gallery to rejoin the Berlin and Leipzig standby. Upstairs, São Paulo’s Mendes Wood DM international head of sales Martin Aguilera reported that their booth sold out. It featured works by
Lucas Arruda
,
Paloma Bosquê
,
Michael Dean
, and
Willys de Castro
, with prices ranging from $10,000–40,000. The four Arrudas on display all went to private museums, and such was the interest in de Castro’s piece from 1959, “we could have sold it about 50 times over,” said Aguilera. He noted that the current economic downturn in Brazil has allowed the gallery, which was initially known for its eye for emerging talent, to “become a bit player on the secondary market. A lot of collectors have been letting go of some real gems.”
However, not just the established names attracted serious interest. London’s Josh Lilley sold all but two of the works—priced between €3,000–7,000—from its solo presentation of 27-year-old Viennese artist Sarah Pichlkostner, who is currently in residency at De Ateliers in Amsterdam. The minimalist sculptures, mostly crafted from blown glass, metal, and brick powder, take a historical perspective on “life hacking” in the lens of technological progress. “It’s been a thrill for us,” said William Pym, who recently left James Cohan to join the younger outfit. “It’s really encouraging to see people taking time for a young artist that nobody has seen before and who is making difficult work.”
With Frieze shifting two weeks forward next year, it and FIAC will soon be in much more real competition for collector attention—and the Eurostar a little emptier on the third Monday in October— than has recently been the case. But the divide between the two fairs has also become increasingly distinct: Frieze, whether in young emerging art or Old Masters, being a place for discovery and for widening the art world milieu, while FIAC holds court to the not-so-petit bourgeois of the collecting scene with polished works and an emphasis on the serious conceptual stuff that the continent prefers. That’s a good thing for both. And both have more than earned their place at the art market’s top rung.