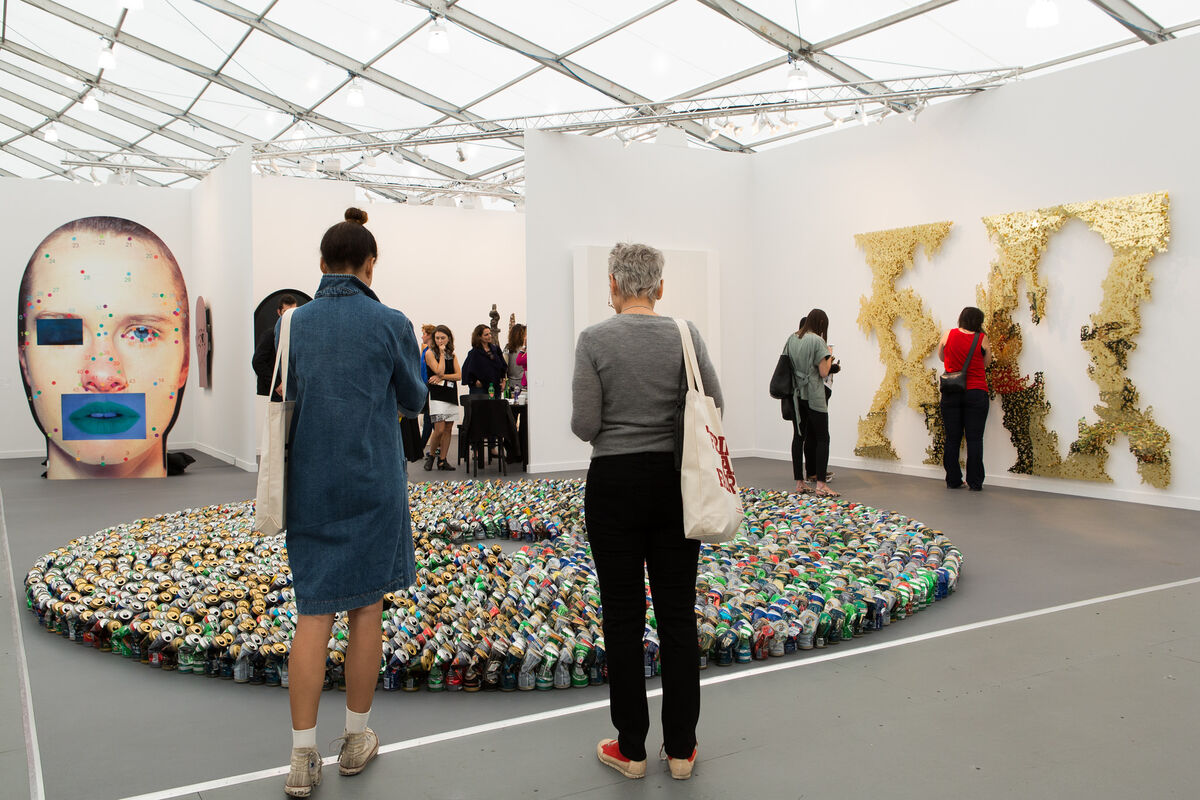 Of those new galleries in the Frieze tent, Skarstedt racked up the strongest results early on. The gallery broke the seven-figure mark with
Cady Noland
’s 1989 sculpture Untitled (Walker), which was snapped up for $1.5 million. The piece combines everyday objects such as a walker, a grocery basket, and a wheeled clothing rack (all in stainless steel), with an American flag draped over the rack. One edition of an iconic
Richard Prince
“Cowboy” print from 1987 found a new home at $600,000. A 2006 bronze bust by
Thomas Schütte
, Wicht (2) also sold in the fair’s early hours for $500,000.
Lehmann Maupin was similarly quick to put their Frieze outing well into the black thanks to patronage by a mix of American and European collectors. The gallery sold no fewer than four works above the six-figure mark on the fair’s first day and went on to close out the weekend with sales of
Robert Cuoghi
,
Nicholas Hlobo
,
Catherine Opie
(who joined Lehmann’s stable last month), Tony Oursler, and Patrick Van Caeckenbergh, among others. Topping the gallery’s tally was a large-scale wall sculpture by
Teresita Fernández
, Ghost Vines (Yellow Gold) (2015). That piece, which sold to a private collection for over $500,000, continues strong interest in the artist’s work in the lead up to Fata Morgana, her installation at Madison Square Park, which will open on June 1st. (The installation’s future impact was already being felt last quarter at the Armory Show.) Los Angeles-based artist
Mary Corse
’s Untitled (White Inner Band with Flat White Outer Bands) (2012) was acquired for more than $160,000 by a collector identified as a “high-level museum trustee.” The artist, who has received a great reprise of acclaim since her 2011 inclusion in the Getty’s “Pacific Standard Time” show and other reexaminations of California’s
Light and Space Movement
, is currently enjoying her second solo show at the gallery’s Chelsea location. 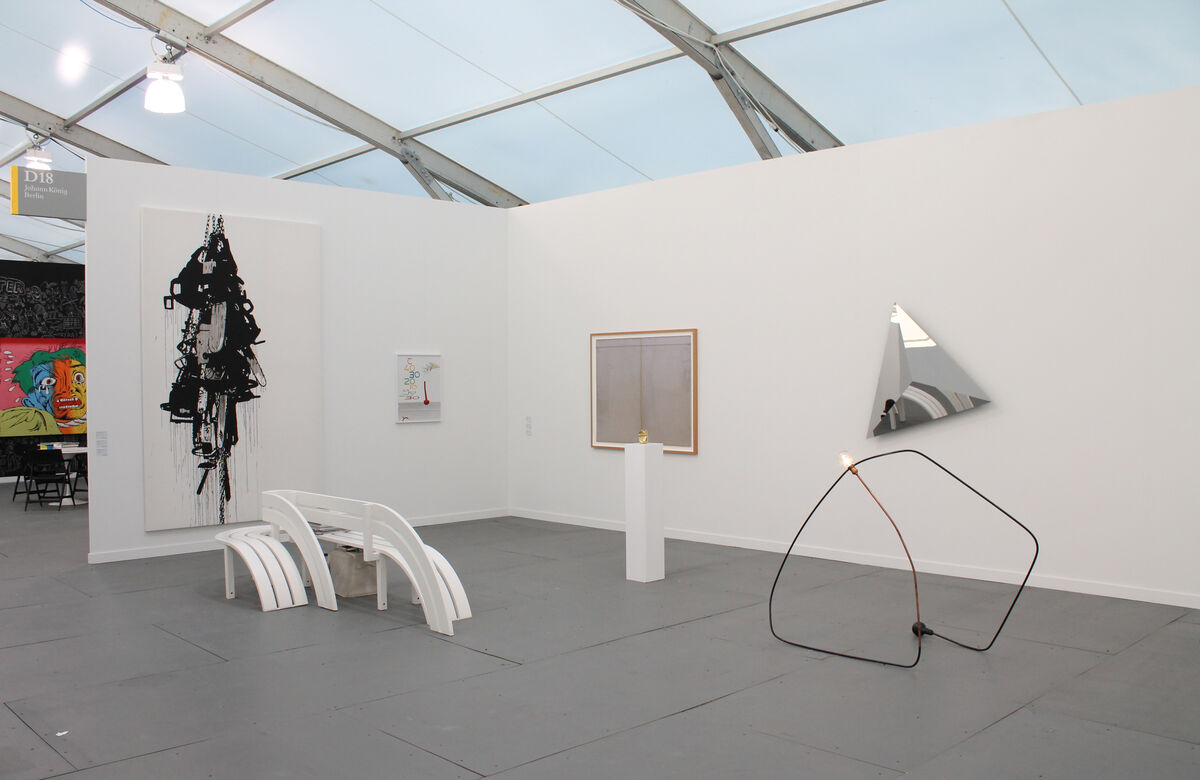 Lehmann Maupin wasn’t the only gallery making hay on public art commissions. Two of Johann König’s artists—Tatiana Trouvé and Jeppe Hein—currently have major installations in public spaces within the five boroughs. Trouvé’s “Desire Lines” is up in Central Park through August 30th and Hein opened his installation “Please Touch the Art” in Brooklyn Bridge Park this past weekend. KÖNIG GALERIE sold Trouvé’s I tempi doppi (2014) and Hein’s Modified Social Bench #30 (2012)—which went within 10 minutes of the fair’s opening. Each piece sported an asking price of €45,000. New artists to the program, Daniel Turner (who had a work for $28,000) and Nathan Hylden, also sold well on Randall’s Island. 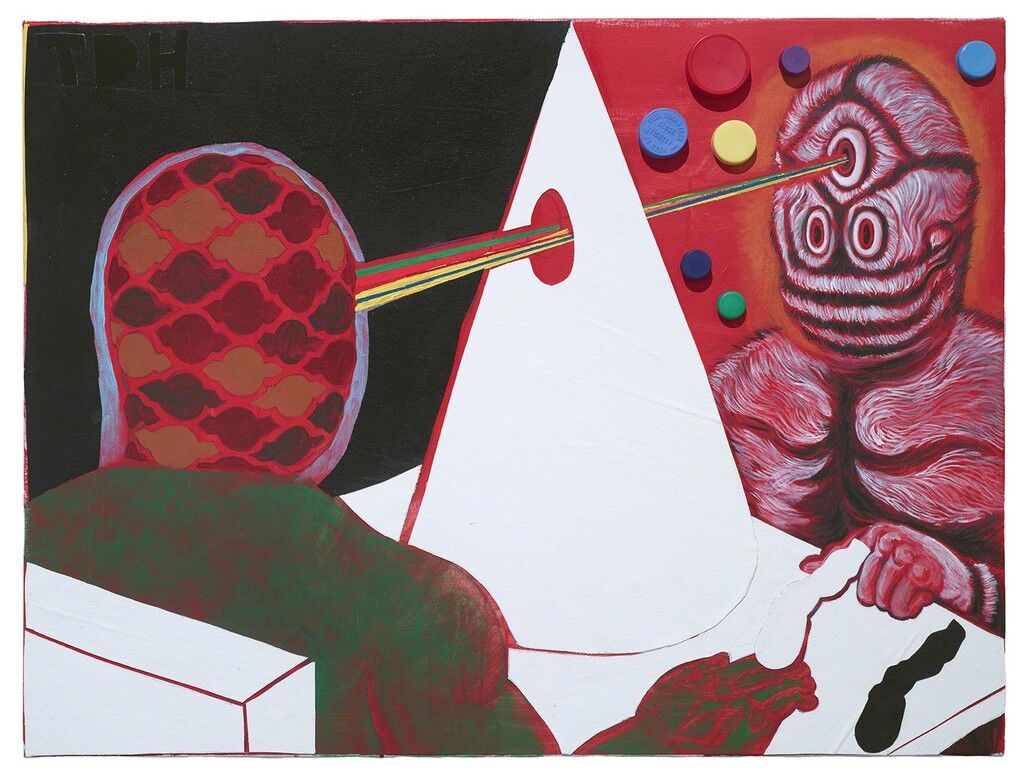 Trenton Doyle Hancock
Knowledge From Samantha, 2015
James Cohan
Advertisement
Works with connections to the Venice Biennale, which opened just one week prior, appeared to be the early winners at Frieze New York, but as the fair wore on, it was those connections closer to home that were most strongly driving collectors’ buying decisions. Another prime example was to be found at James Cohan’s booth, where at least two of the gallery’s paintings by Trenton Doyle Hancock, who currently has a show up at the Studio Museum in Harlem, easily fell into collectors’ hands. (The gallery declined to say for what price.) A suite of works by Spencer Finch—noted for his grand installations at the 9/11 Memorial Museum and the Morgan Library & Museum—from his “Color Test” series that spans the tonal spectrum from warm to cold, were purchased for up to $50,000. Multiple editions sold of Katie Paterson’s Timepieces (Solar System) (2014), which tracks the relative time on each of the planets in our solar system and was also on view at Art Brussels, as well as a piece by Shi Zhiying. (The artist features in the Orange County Museum of Art’s upcoming exhibition of young Chinese artists, “My Generation.”)
Where collectors’ geographical distribution is concerned, Frieze does appear to be a more international affair than the rivaling Armory Show, a fair that has remained focused on New Yorkers and those from the flyover states. Asian collectors and/or their advisers were particularly well represented at Frieze, likely thanks in no small part to the blockbuster set of sales at Christie’s, Sotheby’s, and Phillips during the same week. But in opposition to those auctions, where top lots were more often than not headed west—over the international date line—big-ticket acquisitions at Frieze were still the domain of Americans and Europeans. 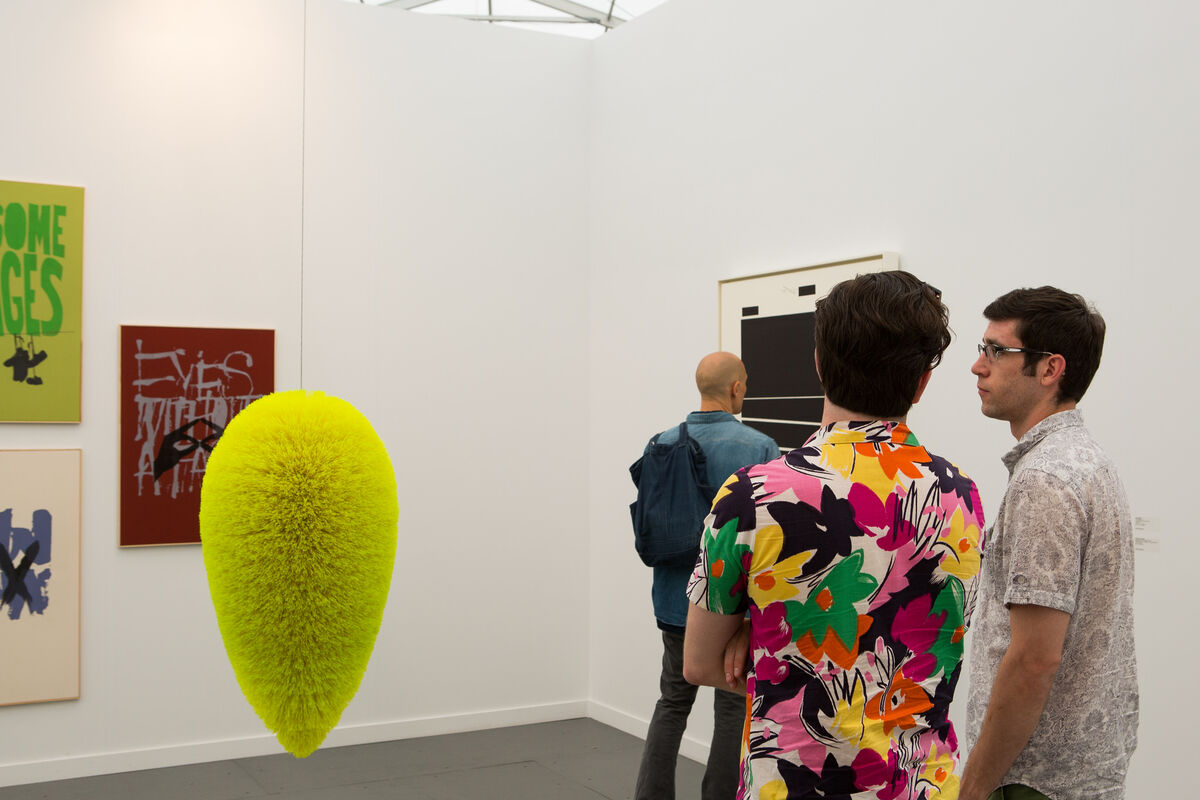 Such was the case at Sprüth Magers, where London director Andreas Gegner reported selling a nearly five-meter-long
George Condo
from 2001—In Out (Component Painting)—to an American collector for an undisclosed sum.
Barbara Kruger
’s print Untitled (Connect) (2015) and Jenny Holzer’s engraved marble bench Selection from Truisms: It is crucial… (2015) both found homes in the U.S., each for $150,000. Sales of
Cyprien Gaillard
,
Walter Dahn
, and Karen Kilimnik were also wrapped up by fair’s end. Gegner noted that the gallery was very pleased with their outing, despite Frieze New York not having “the same sort of frenzy” as Art Basel. That’s likely due to its island location, which, four years on, still means collectors tend not to come back for more than one visit. However, “once people are here, they stay,” said the director, pointing to the fair’s unparalleled setting and food that is actually more than something to be choked down only for calories’ sake.
It’s a relaxing and enjoyable atmosphere that numerous dealers, and particularly those based in Europe and Asia, pointed to as allowing them to sell more difficult-to-collect or lesser-known artists from their roster than is often the case. “People commit to coming here,” said Peres Projects’s Nick Koenigsknecht. The gallery sold a large-scale
Brent Wadden
woven painting to a German private museum as well as works by
Mark Flood
and
Mike Bouchet
—none of those are exactly surprises in today’s market. More surprising, however, was the success the gallery saw with works by
Marinella Senatore
, monochrome-painted pieces from sets of the multi-year-long film/performance productions for which she is known. “She has such an incredible institutional presence,” said the director. But up until Frieze they hadn’t found the right platform at which to successfully translate that commercially. 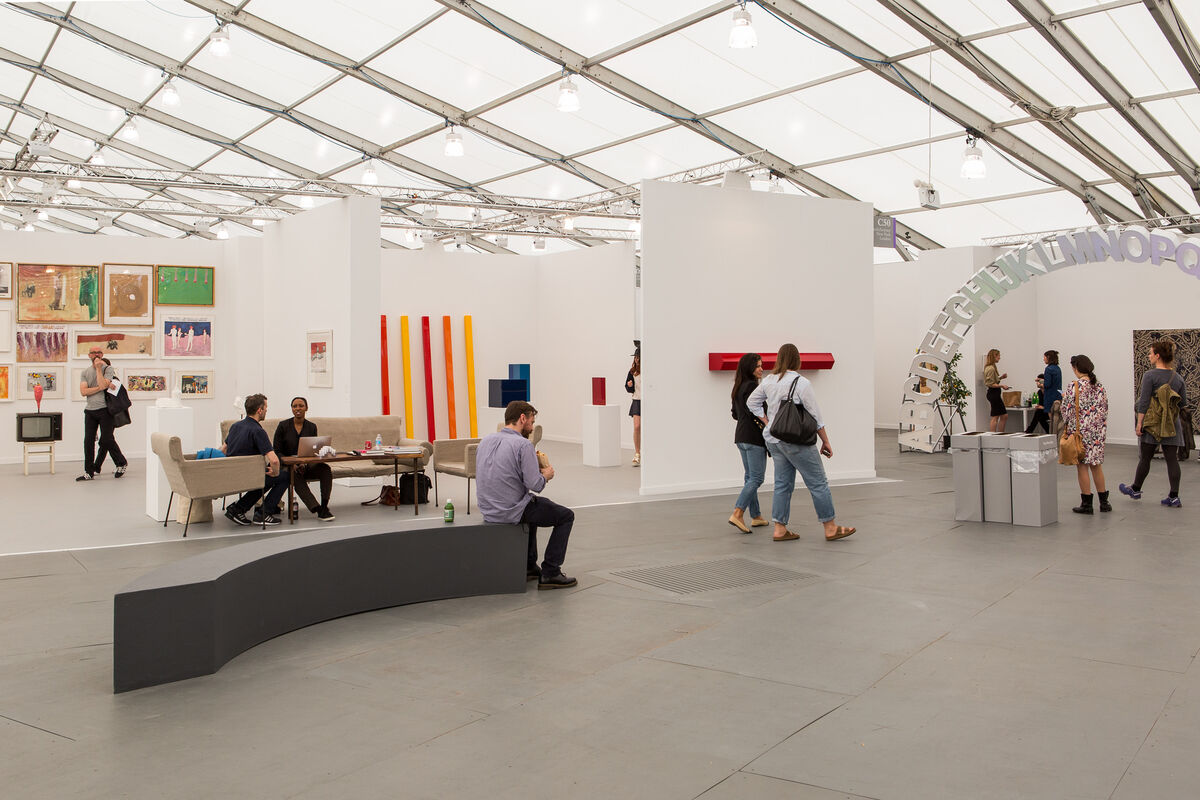 In large part, the formula Frieze has developed for New York since 2012 is now empirically proven and well set. But, throughout the week, feedback from dealers placed one challenge most directly in front of Victoria Siddall as she takes over the directorship of the fair from founders Matthew Slotover and Amanda Sharp: how to make the fair more than a yearly one-off excursion. Despite the solid lineup of programming and generally as-enjoyable-as-it-gets vibes for an art fair, the fact is, most New Yorkers seem more keen to take two trips to the British Isles via Terminal 7 than to the island on which the British fair has set up shop.
Alexander Forbes is Artsy’s Consumer Marketplace Strategist. He was previously the Executive Editor of Artsy Editorial.
Revisit Frieze New York 2015 on Artsy.
Related Stories