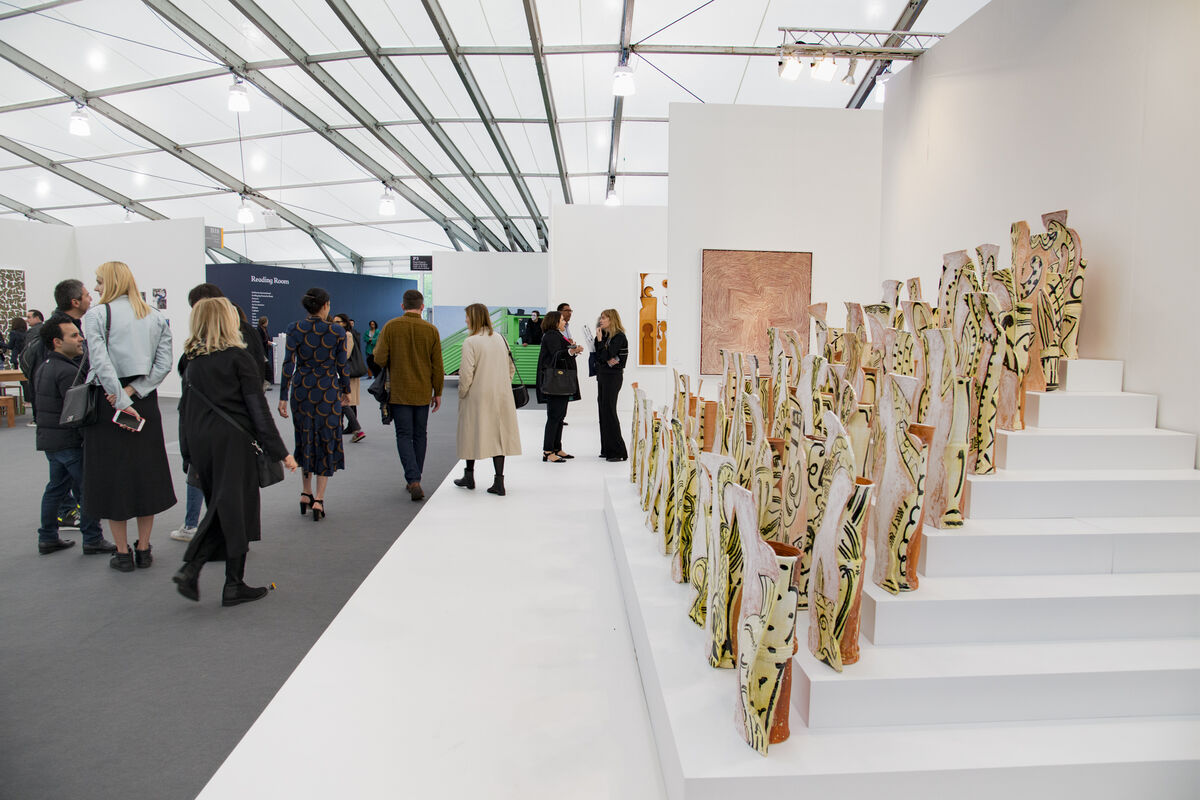 An hour and a half into the VIP preview of Frieze New York last Wednesday the news hit. John Kasich would end his bid to be the Republican nominee for president of the United States, leading Donald Trump, against all predictions, to become the party’s presumed candidate for the White House. Trump’s promises to “make America great again” have won over a plurality of the country’s voters who choose to sport an elephant lapel pin. But for many in the art world, the business world, and the world at large, the prospect of a Trump presidency has, at best, generated unease.
The possibility of President Trump and near certainty among analysts that an economic down cycle is pending has sent jitters across the art market and wider macroeconomy spanning from New York to Hong Kong. Around half as much art, by value, is estimated to sell at New York’s major spring auctions this week as this season last year. And at art fairs (among which Frieze New York is no exception), purchases of higher-priced works have been slower and less abundant than in years past. Young galleries sold well at Frieze last week, with works priced at around $15,000 or below. For established galleries, results were more modest than in past years. With much of the market’s froth tamped down due to uncertainty, it was a better schooled and pickier upper echelon of collectors who made most of the week’s high-priced purchases.
“Collectors right now can spend money and they will, but they want the best work available,” said Galerie Thaddaeus Ropac’s José Castañal on Friday. The gallery had, by that time, sold three works by
Georg Baselitz
, a medium-sized sculpture from
Tony Cragg
, and an
Erwin Wurm
“Fat Bus.” (Wurm, along with
Brigitte Kowanz
, will rep Austria at next year’s Venice Biennale.) Though the director noted that even one sale of a major artist such as Baselitz can put a gallery in the black for a fair like Frieze, boomtimes these are not. “Sometimes people think that just because you have established artists, it’s easier to sell, but people buying established artists also have a different way of buying,” said Castañal. 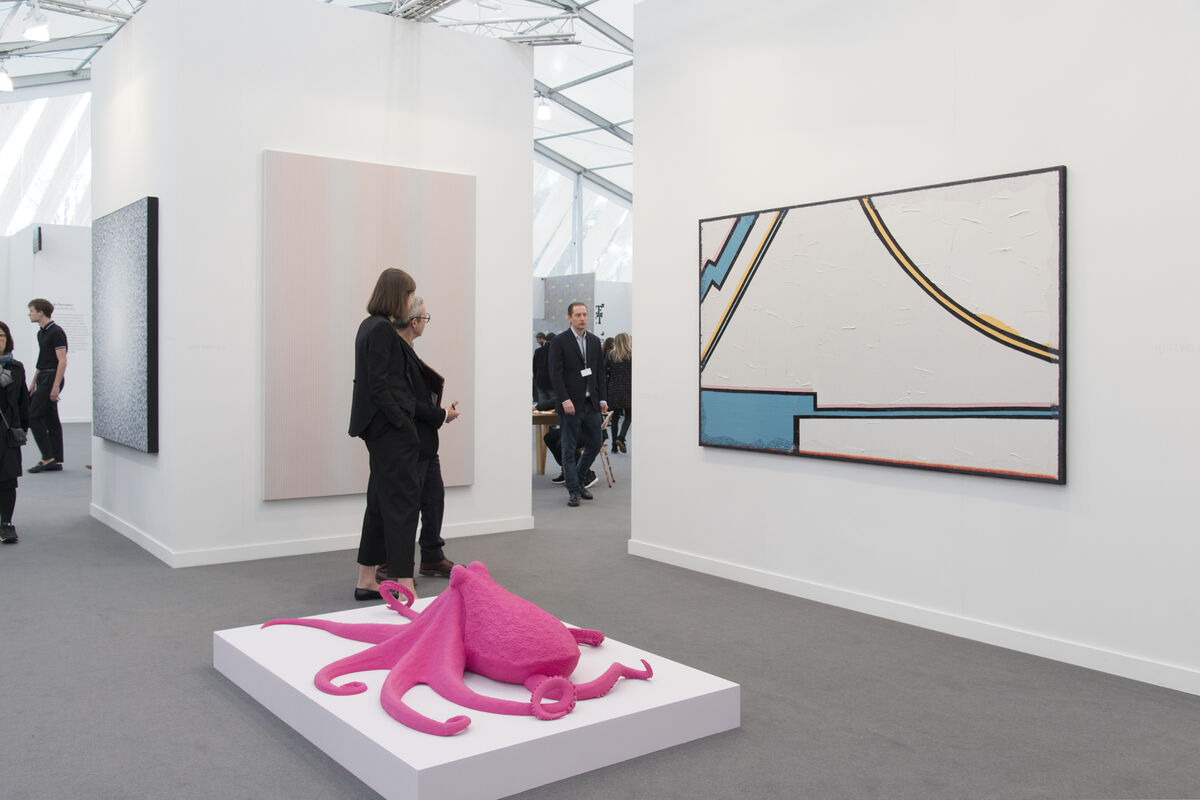 Over at Almine Rech’s stand, managing partner Paul de Froment noted a similar trend in the gallery’s sales. “For the past two years, it’s been a little bit slower, both at Frieze and in the art market in general,” said Froment. The gallery’s booth at Frieze presented a trio of major artists from the
Neo-Geo
movement—Peter Halley, John M. Armleder, and Olivier Mosset—as well as a pair of works by a younger artist from its program, Mark Hagen.
Froment noted on Friday that he had sold works by each of the artists presented (among which several by Mosset), despite the slowdown in the market. And he credited that success to the gallery’s consistent focus on quality. “When you see what happened on Wall Street two days ago based on the announcement that Donald Trump would be the Republican nominee, it certainly adds insecurity into the market,” said Froment, noting that he was keeping a particular eye on the markets during this period of instability. “But I think if you put good art on the walls, it’s not something that you have to worry about too much. That’s what we try to focus on, because that’s where we have influence.”
Hauser & Wirth has no doubt taken a similar approach to quality in recent years. Its biggest success at Frieze New York came by way of two works from the Philip Guston estate, which the gallery began representing last September. Guston’s oil Black Coast (1977) and a drawing from his series of sleeping figures from the same decade both sold for undisclosed prices. “Frieze New York has grown up,” said gallery partner and vice president Marc Payot. “The fair has taken its place among the best in the world,” he added, with the gallery’s sales throughout the week being characterized as “robust.” Those included a pair of Roni Horn’s cast glass sculptures at $975,000 apiece as well as Paul McCarthy’s SC Western Red River, Red (2016), the first work in a new series entitled “Stagecoach,” for $750,000. 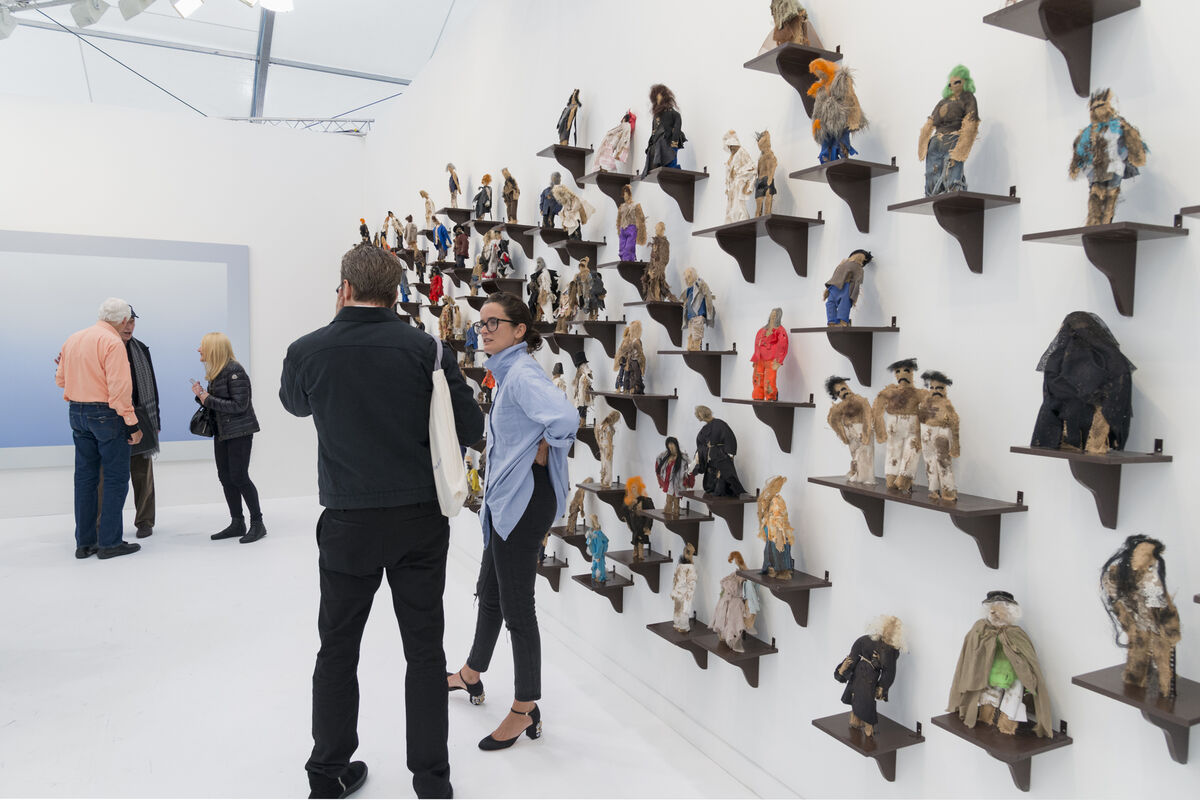 Advertisement
Collectors last week remained ready to pull the trigger on works at the lower end of the spectrum. This was evident by the strong, early sales seen across Frieze’s fresh-faced compatriot, NADA New York, and at Frieze itself in the Frame and Focus sections, which host younger galleries and artists, offering curated presentations.
Lower East Side gallerist James Fuentes sold no fewer than 12 works by
Benjamin Senior
at Frieze New York this year, priced from $6,000 to $15,000. “We’ve always known Benjamin is really special,” said gallery director James Michael Shaeffer. Fuentes began working with the artist while he was still at the Royal College of Art, giving him his first show at the gallery in 2011. “Even though that was only five years ago, thinking about what art was doing at that time, to choose this was not at all cool,” added Shaeffer. (That has, of course, changed thanks to the strong trend back towards figurative painting that has taken over the conversation around emerging art in the past couple of years.) Shaeffer noted that while they’re not eager to react to trends in the market, Senior will have a solo show at the gallery this coming winter. “We work with each of our artists one on one,” he said. “It just happened to sync up with what was happening in the market,” he said.
Even more effusive about his positive experience at the fair was Sultana founder Guillaume Sultana. “It’s totally a dream,” said the Parisian gallerist of his third outing at Frieze New York. “Things are very busy and I’ve only been selling to new people.” Sultana had sold all of the new works by Pia Camil featured in the booth for €9,000 to prominent collections from Miami and London. “She’s had a great amount of visibility because of her recent New Museum show, but these ceramic pieces are completely new,” he said of the works, which consist of ceramic masks placed on plinths created out of the slatted walls stores use to hang their wares. Also selling well were new paintings by Jacin Giordano, priced between €5000–12,000. The works are based on Native American culture and see the artist carve into many layers of acrylic in a way that recalls woodcutting. (So smitten with his purchase was one collector that he had to stop back by the booth to admire his new work: “I’m looking at it and thinking to myself. Oh my god, what did I buy; it’s wonderful. Tell Jacin I love him.”)
Sultana said the success at Frieze New York was a welcomed relief. “In Europe, it’s a very bad time in the economy,” said the gallerist. “We had a very hard time last winter in Paris. Nobody was coming to the gallery.” While the election might have some spooked from major acquisitions in the U.S., in his hometown Sultana has felt the continued effects of the November 13th terrorist attacks, which killed 130 individuals. “American collectors don’t want to travel to Europe at the moment. It’s so sad because terrorism can happen anywhere,” noted Sultana, adding that galleries had reported that Americans had shied from traveling to Brussels during Art Brussels and Independent in April and that some had discussed canceling their plans to attend Art Basel. “I hope it’s going to change with time,” he said, suggesting that in the meantime, this might be accounting in part for his added success at Frieze, as New York collectors continue to spend closer to home. 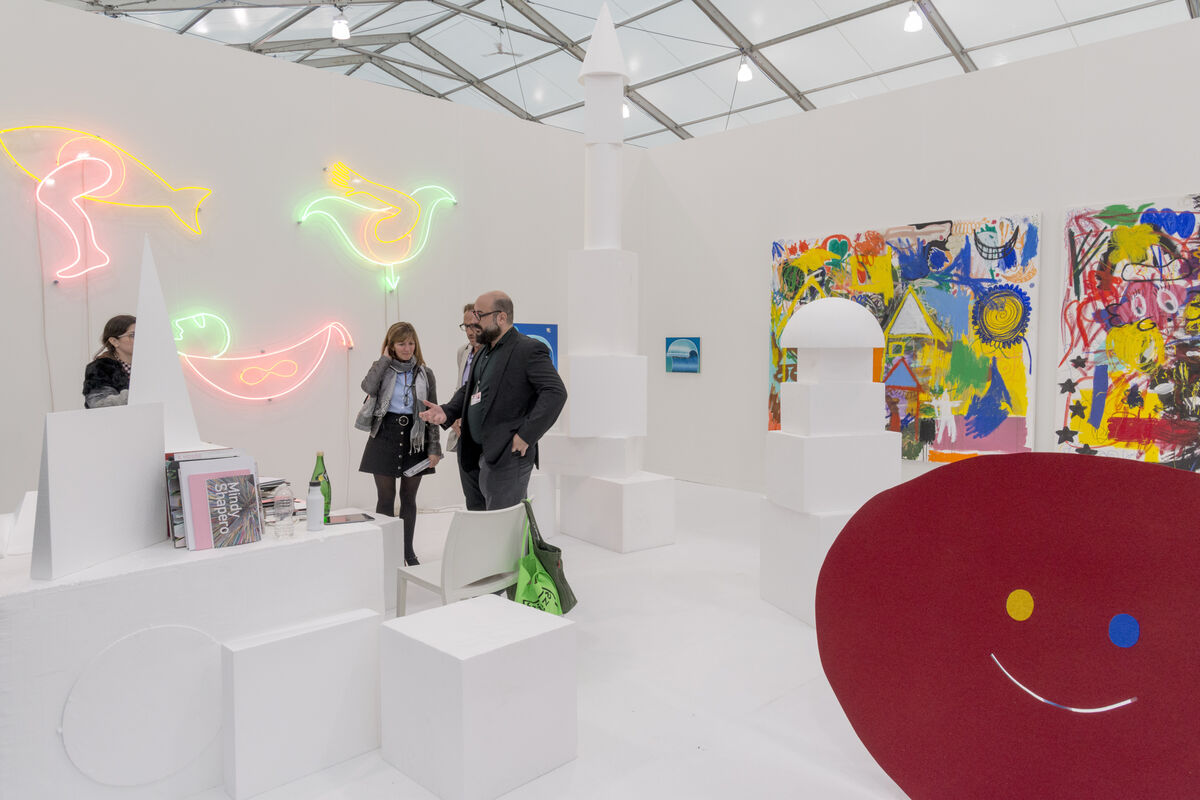 Galerie Max Hetzler’s Samia Saouma noted a similar contraction in the number of American visitors to the previous week’s Gallery Weekend Berlin, despite record attendance overall. “People are insecure about what the elections will bring, not only in this country but also the Brexit, and the refugee crisis across all of Europe. It’s a transition period,” explained Saouma. The gallery showed works mainly by three artists,
Albert Oehlen
,
Edmund De Waal
, and
Raymond Hains
, in its first outing at Frieze New York. And while she reported making some sales during the fair’s run, Saouma also suggested that this transitional moment in the political and economic scene should spark transition in the art world as well. “We need to rethink the whole thing as gallerists,” she said. “There is an art fair fatigue. There’s an inflation of art” in New York, added the dealer, who noted the auctions as well as the “many excellent galleries with very, very good shows” in Manhattan taking attention away from those at the fair in a way that happens less so in places like Miami and Basel.
Sean Kelly Gallery director Janine Cirincione had a different perspective on how the art world should react to the changing macro-environment. “We know that from now until the election it’s going to be dukes up. We don’t know what to expect on any given day. We don’t know how that will affect world markets,” said Cirincione. And while the rest of the world gets nervous about what might transpire, “we just have to fasten our seatbelts a little bit and get ready for a bumpy ride. We all knew the constant trajectory upward wasn’t realistic in the long term.”
Cirincione equates the current jitters as something of an art world recency bias. Players feel particularly down now because they’re biased to compare their performance to the recent several-year-long sprint upward, rather than to economy’s consistent cyclical patterns of growth and contraction. Selling Antony Gormley’s sculpture Daze II (2014) for £350,000, Callum Innes’s painting Exposed Painting Delft Blue (2016) for £40,000, Los Carpinteros’s watercolor Espuma Cúbica (díptico) (2016) for $50,000, and
Hugo McCloud
’s mixed media work on paper Untitled (2016) for $37,500, as did Sean Kelly on opening day, isn’t a bad day’s work, after all. It just reflects the activation of a core base of art lovers without the added bonus of buyers brought on by surging economic indices. “Hedge fund guys will be the first ones out of here when they get nervous,” said Cirincione. “But working with people who are buying for the right reasons, for the love of collecting, is something that is very sustainable, even in uncertain times.”
Alexander Forbes is Artsy’s Consumer Marketplace Strategist. He was previously the Executive Editor of Artsy Editorial.
Related Stories 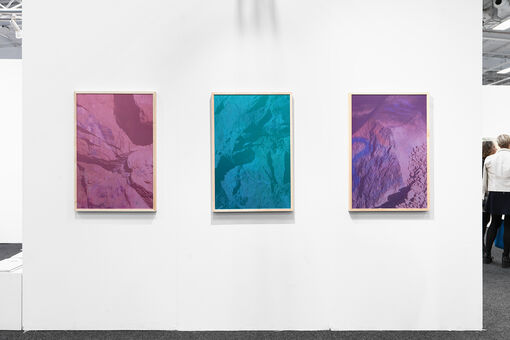 NADA New York Kicks Off with Speedy Sales and Art You Can Touch
Alexxa Gotthardt
May 6, 2016 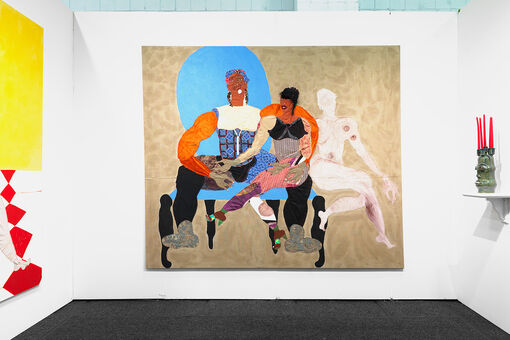 The 12 Young Painters You Need to Know at NADA New York
Molly Gottschalk
May 6, 2016 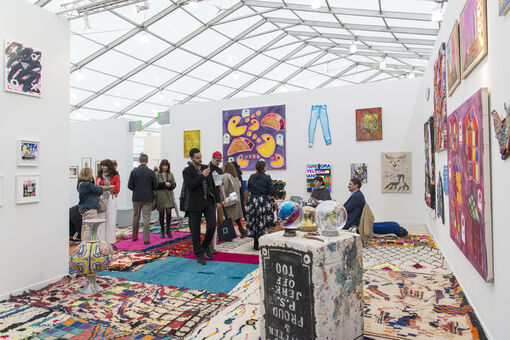