What Sold at TEFAF New York 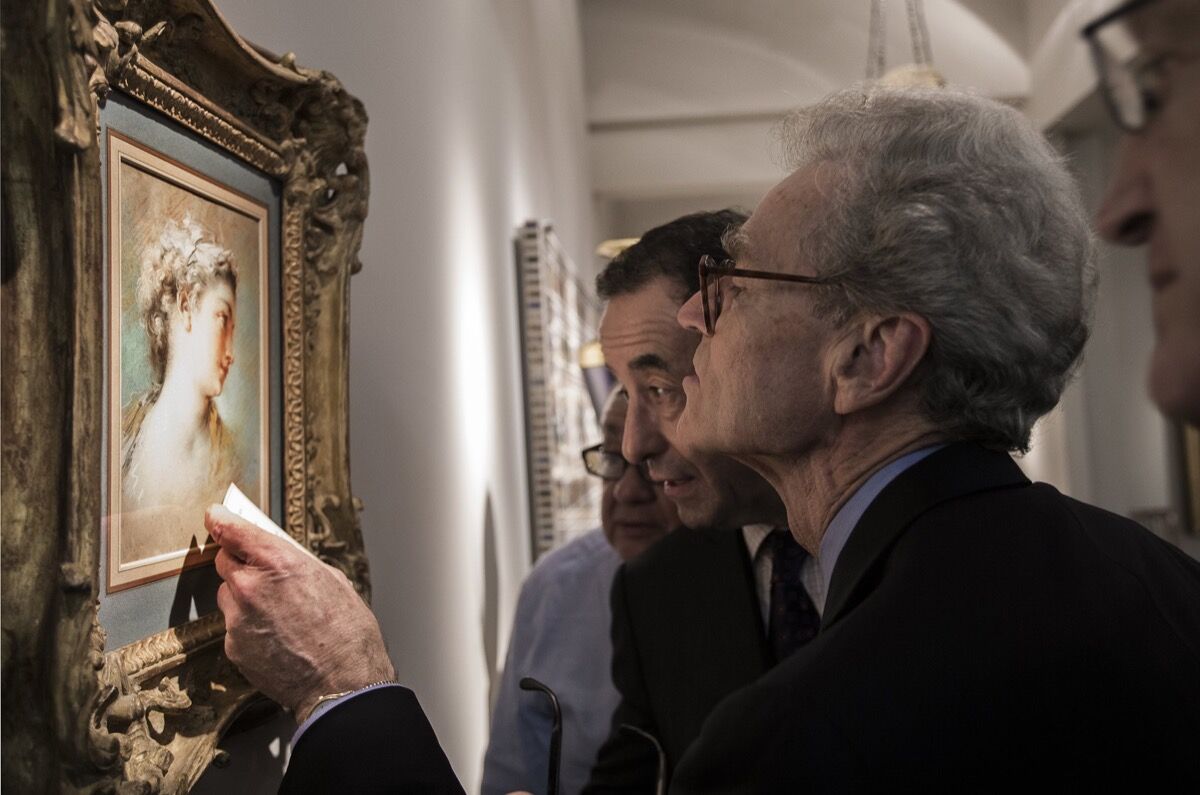 The European Fine Art Fair’s (TEFAF) New York debut closed on Wednesday. This inaugural edition is a decidedly smaller affair than its mothership in Maastricht, which each spring confirms its reign as the Grande Dame of the art fair circuit. TEFAF New York welcomed 94 galleries to the Park Avenue Armory over its six-day run. In Maastricht, upwards of 270 galleries typically hold court.
Unchanged in New York is the near-obsessive attention to detail that has been characteristic of TEFAF since its founding in 1988. As has become a hallmark for the fair, all works are vetted extensively by an expert panel and sophisticated scientific techniques to ensure authenticity. (TEFAF was among the first fairs to use the very advanced Hirox digital microscope in 2011, allowing up to 7000x magnification of a work’s surface.) Any work garnering even the slightest shred of doubt is locked away for the duration of the fair. Perhaps even more so than at major auction houses, collectors of
Old Masters
can enter TEFAF with the assurance that the work they’re buying is legit. This is no small thing given that in the sectors on which this fall edition of TEFAF focuses—art and antiquities up until 1920—one forgery scandal seems to follow on the coattails of the next.
TEFAF didn’t spare effort on any of the aesthetic touches put forward in this inaugural New York edition either. The fair hired its go-to interior architect Tom Postma to transform the Park Avenue Armory’s 55,000-square-foot Wade Thompson Drill Hall—and, most astonishingly, the wood-paneled rooms on its second floor that, for the first time since the building was reborn as an art center in 2007, hosted exhibitors. The result—maroon and cream shrouded walls, floral arrangements that hung two floors in height, and a freely flowing supply of oysters and champagne on opening day—set the proper stage for a very different crowd than you might find at, say, Art Basel in Miami Beach. 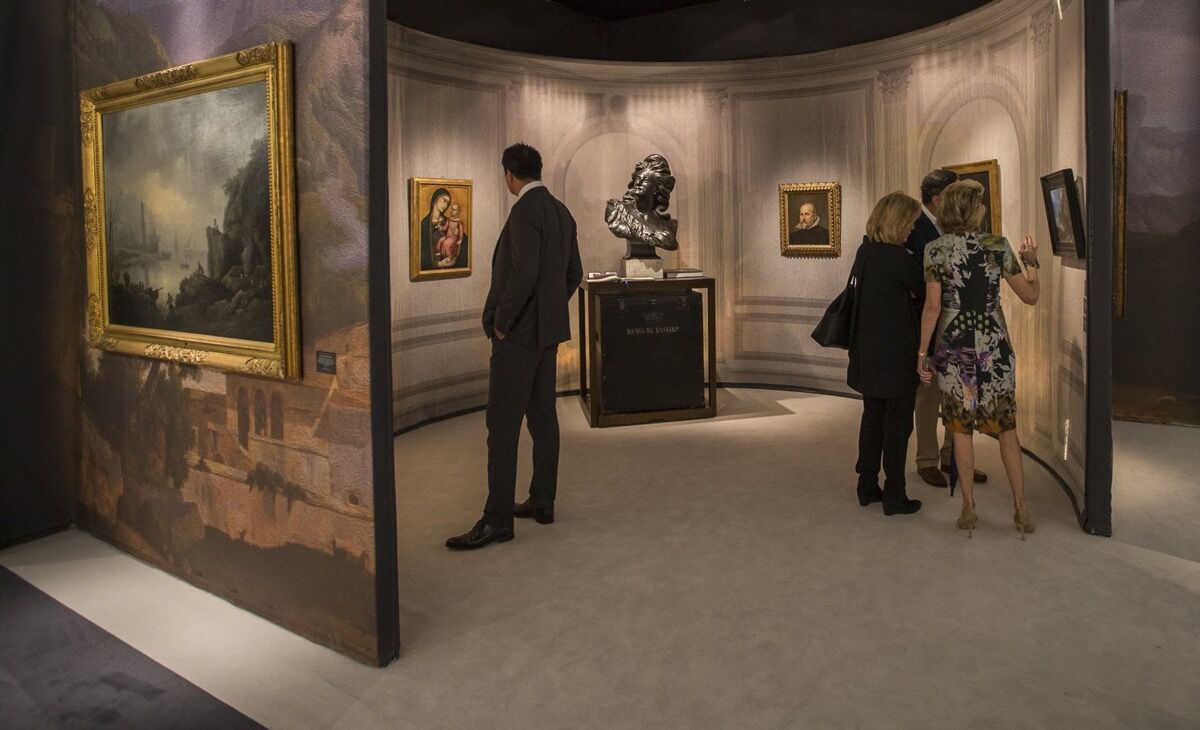 “The fair has been a triumph,” said veteran TEFAF dealer Dino Tomasso of London’s Tomasso Brothers Fine Art, as the fair headed toward its close this week. Tomasso was one of 12 dealers to have the privilege of showing in the more residential environment of the period rooms on the Armory’s first and second floors, and said that both new and returning clients had been astonished at what TEFAF had managed to achieve in just eight months since announcing that it would buy the The International Show, which previously held down this week on the calendar. (In May, TEFAF New York will also host a spring edition using the former dates of Spring Masters.)
As did many dealers across the fair, Tomasso noted that opening a New York outpost has seemingly allowed TEFAF to branch out to Americans who otherwise hadn’t had the opportunity to travel to or fully understand what this fair is all about. “It’s been a nationwide audience,” said the dealer. “We’ve had museums and institutions here that we’ve never seen be able to make the trip. And therefore, this should be a stepping stone for them to be able to visit the mother fair, Maastricht.”
As of Tuesday evening, Tomasso had sold Swedish
Neo-Classical
sculptor Johan Tobias Sergel’s terracotta A Nymph and a Satyr crowned by Cupid (c. 1770–80) for $200,000. The piece was created in Paris while Sergel was traveling back to his homeland from Rome, and shows the great influence of the Eternal City’s ancient reliefs as well as that of the Flemish sculptor François Duquesnoy, who worked in Rome in the early 17th century. Red dots indicating sales also graced the placard of a 16th-century Italian model of a pacing horse; a limestone sculpture, Funeral stele for Apion, son of Bion from 2nd- to 1st-century B.C. Greece; and a Portrait bust of young Commodus from 18th-century Rome.
Of particular surprise to Tomasso amidst what he described as a strong market at TEFAF was interest among younger collectors. “We sold something we didn’t even expect to sell, to a contemporary collector,” said Tomasso. “You might expect a contemporary collector would fit something like a vanitas skull. That seems to be the trend these days with their appreciation of antiquity. But it was an extremely elegant object from the 18th century,” presumably the aforementioned Roman bust. 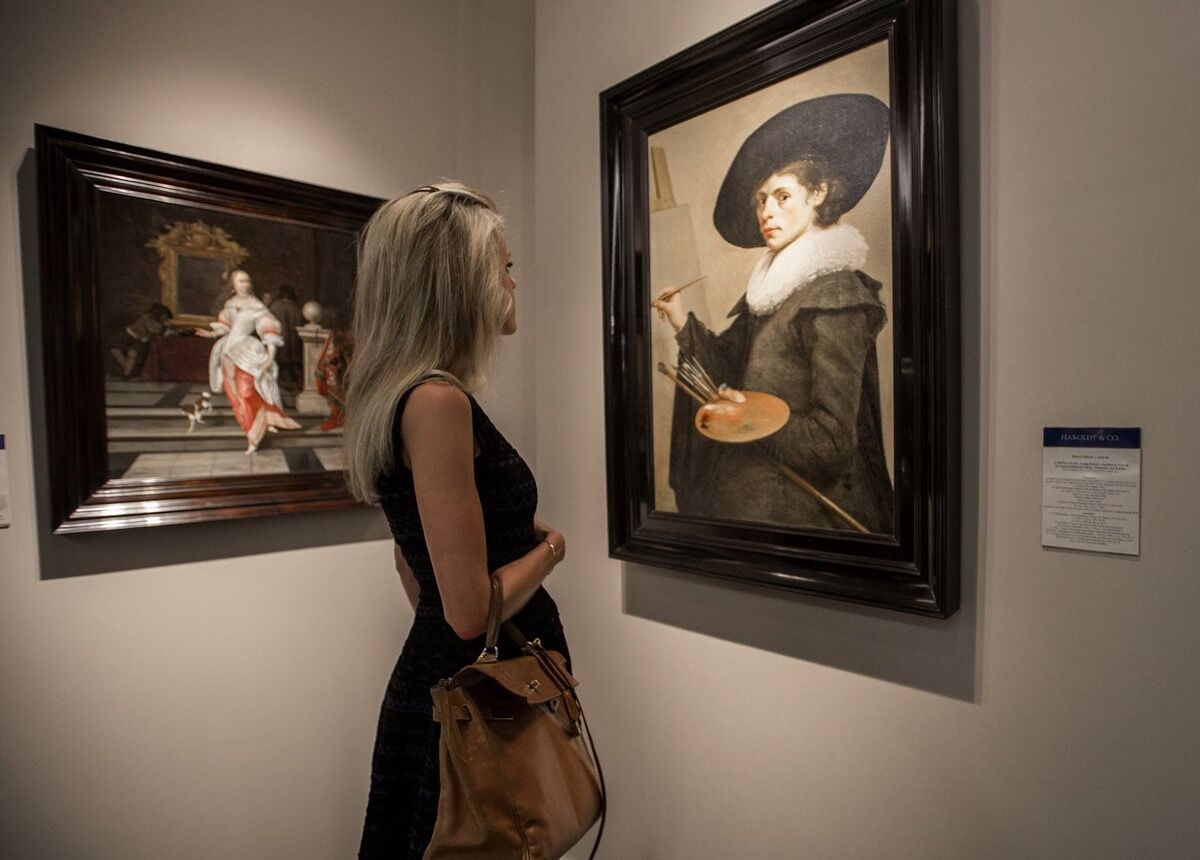 Advertisement
New York dealer Otto Naumann, LTD designed its stand particularly with younger collectors in mind. “There’s a lot of talk among Old Master dealers of the market dipping and the need to find new ways to revamp interest in Old Master paintings,” said Naumann’s Bria Koser of the gallery’s impetus to rethink how one might present work at TEFAF. “It’s not a traditional Old Master hang,” she said of the booth, designed by New York firm Sawyer | Berson, which saw some 10 Old Master paintings removed from their period frames and placed instead in minimal black frames. For those among us to whom ornate, gilded frames don’t necessarily appeal, the effect was stunning, letting the viewer focus on the works themselves—and indeed easily imagine them hanging alongside post-war and contemporary pieces.
Naumann’s stand was the talk of TEFAF, but not just because of its innovative design. On opening day, CNN anchor and contemporary art collector Anderson Cooper and his partner Benjamin Maisani purchased
Anton Raphael Mengs
’s Portrait of Mariana de Silva y Sarmiento, Duquesa de Huescar (1775) for $275,000 to much media attention. The piece recently featured in the Met Breuer’s inaugural show “Unfinished: Thoughts Left Visible,” a detail that was not lost on Maisani. “We were speaking about a few of the things we have on the opposite wall but when we turned around it was like a tractor beam,” said Koser of Maisani’s immediate attraction to the work.
Nonetheless, Maisani reportedly returned the next day to purchase a second work from Naumann on that opposite wall,
Andrea Vaccaro
’s The Martyrdom of Saint Bartholomew. “In their home they’ve always blended their two aesthetics,” explained Koser of Cooper and Maisani. And though they’ll be returning the two pictures to the period frames, this cross-over collecting by the younger generation is a strong example of where TEFAF and its dealers need to see their demographics head before their current, aging base dwindles too much further in numbers. 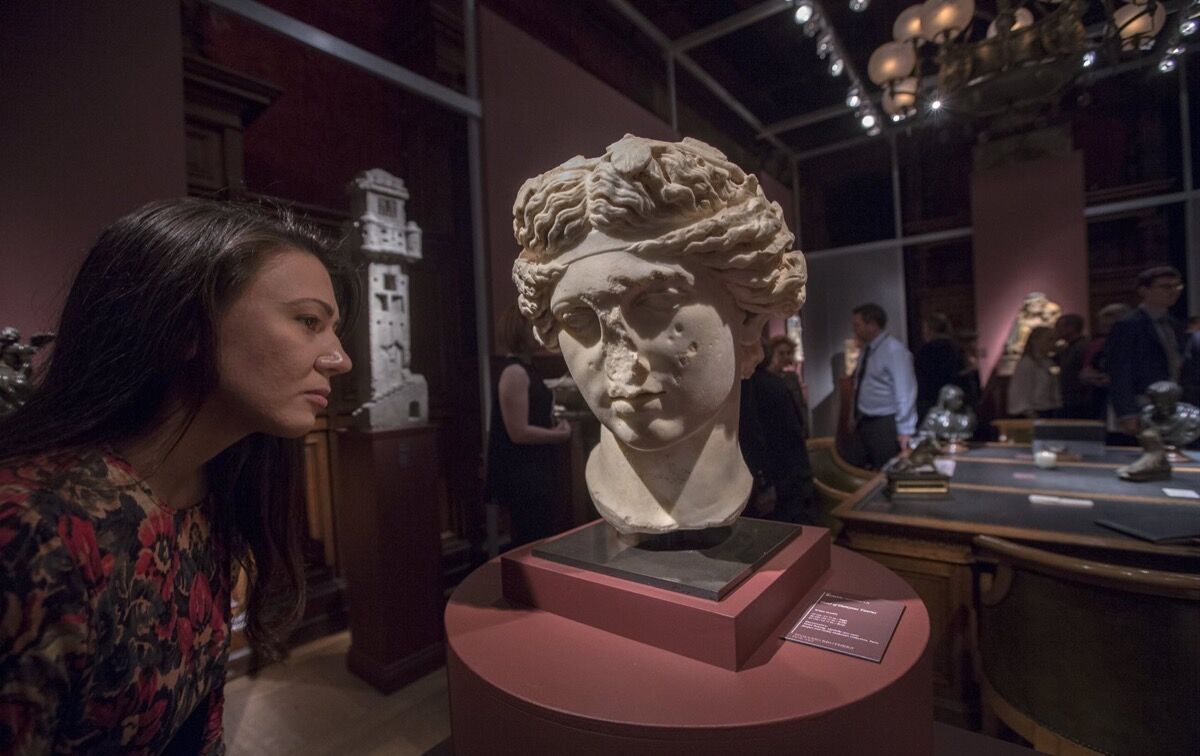 Some dealers at TEFAF’s New York debut found it disappointing that more overt crossover couldn’t be accomplished at the booths themselves. In recent years, as contemporary art has dominated the art market, dealers at TEFAF Maastricht have increasingly mixed newer works in with their offer of Old Masters and antiquities. At the forefront of that movement has been Axel Vervoordt. “It’s our philosophy that a good piece of art is timeless. We like to bring together pieces of art from different regions and different time periods. You see links that you wouldn’t otherwise,” explained the Antwerp gallery’s Annemie De Maeyer. But, while the dealer’s stand at TEFAF New York featured pieces from across the centuries, the 1920 cap on works allowed to be shown at this iteration of the fair did hem in on possibilities. The spring show, on the other hand, will focus solely on modern and post-war works.
Nonetheless, De Maeyer reported a strong showing by collectors at the fair. While many deals remained in negotiations as of Tuesday evening—something normal for fairs featuring older material—the dealer could confirm the sale of a Hathor capital, which sat at the center of one of the second-floor room’s wood-paneled walls, and an Egyptian offering table. Both pieces went to collectors from Asia. Dealers across TEFAF suggested that Asian buyers were perhaps the second most prevalent at the fair, after Americans, perhaps no surprise due to Chinese collectors’ proclivity towards antiquities.
Whether due to the overall cooling of the art market at present, continued (though lessening) insecurity about the fate of the United States presidential election on November 8th, or this simply being TEFAF’s debut New York outing, few sales in the seven figures were to be found by Tuesday evening. Bernard Goldberg reported having sold
Edward Hopper
’s Portrait of Guy Pene du Bois (c. 1904) for upwards of $1 million. (The work was a gift from Hopper to his fellow art schoolmate, and remained in du Bois family until 2000.) Goldberg, who was understandably chuffed about the sale, said, “We do many fairs and this is the most successful show we’ve ever had.” He further noted the sale on Tuesday afternoon of
William Glackens
’s vibrant Bal Martinique (1928–29) for an undisclosed sum.
Alexander Forbes is Artsy’s Consumer Marketplace Strategist. He was previously the Executive Editor of Artsy Editorial.
Related Stories