What Sold at The Armory Show? 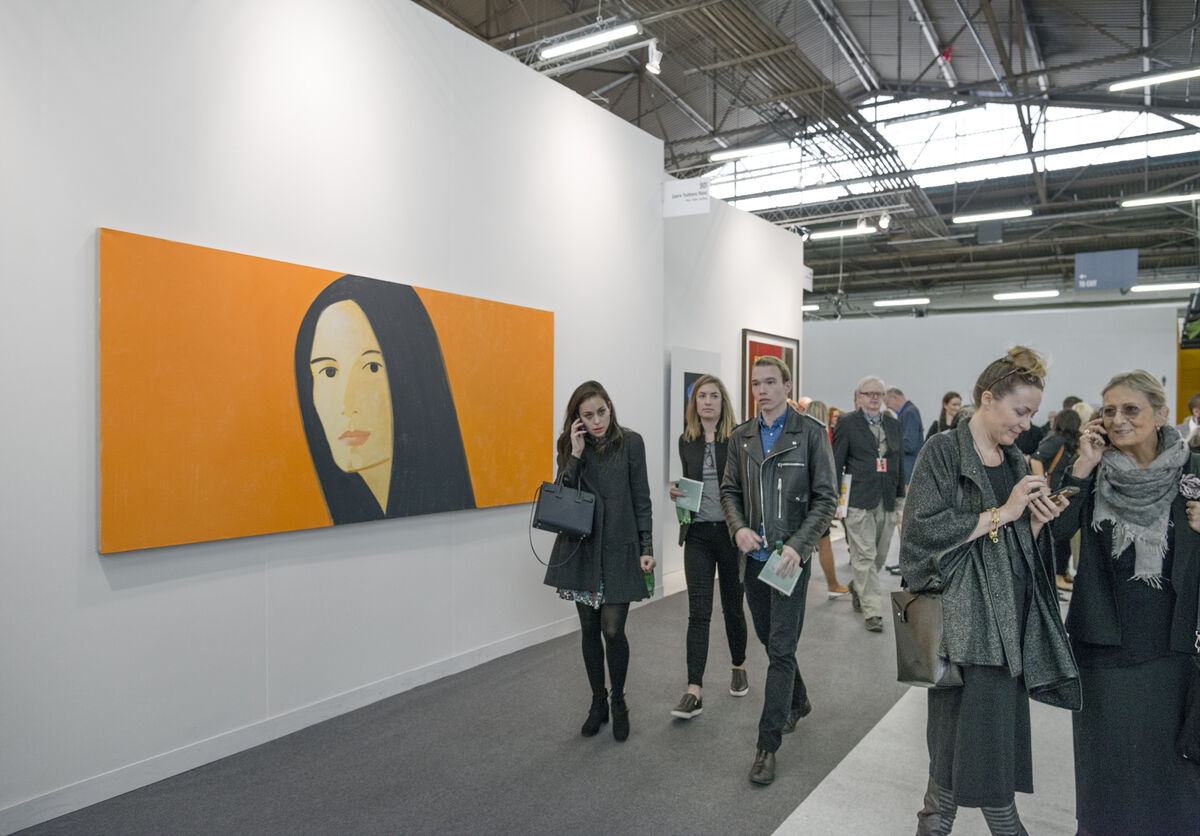 The Armory Show closes this evening following a busy 22nd run over the past five days on Manhattan’s Piers 92 and 94. The fair’s 2016 edition comes at an uncertain time for the global economy. Brazil is in the doldrums. On Saturday, China lowered its economic growth target for 2016 to 6.5–7%—its slowest projected growth in 25 years—and declined to announce a trade target on fears of global instability. Lagging investment from China and commodity price declines have put Africa’s growth in question. And the Russian economy continues to slide.
The U.S. economy received positive news on Friday: a better than expected 242,000 jobs were added in the month of February. And, as a result, the Dow eked above 17,000 to close at a two-month high. Given that the U.S. has thus far remained relatively isolated from instability in global economic forecasts, a good number of new dealers were lured to The Armory Show this year. But with prominent investors suggesting a U.S. recession is but the next domino to fall, and concerns about a contracting art market staying continuously above the fold in art publications since the year’s start, collectors are understandably cautious at the moment. They’re sticking to consistent, strong performers on the established end of the spectrum and young artists whose low prices amount to an unnoticeable blip on their portfolio summary page.
Those bookends at the high and low extremes of the market nonetheless played out for a resoundingly successful 2016 edition of The Armory Show. The common refrain from dealers across the fair was “These aren’t the boom years, but we’re doing just fine.” A time for panic, this is not. Most of the fair’s biggest sales popped early on, either being confirmed during Wednesday’s vernissage or shortly thereafter. A sculpture by
Ugo Rondinone
was picked up from Zurich’s Galerie Eva Presenhuber for $350,000. Sean Kelly led a strong set of sales among multiple dealers representing
Kehinde Wiley
at the fair, with the painting Equestrian Portrait of Philip III (2016) selling for $300,000 and the sculpture Bound (2015) selling for $375,000 from Kelly; Daniel Templon also sold a Wiley painting for $250,000. YBA
Richard Patterson
’s Soaper (2015) and Christina with Dutch Door (2015) sold for $250,000 and $100,000, respectively, from Timothy Taylor’s booth. 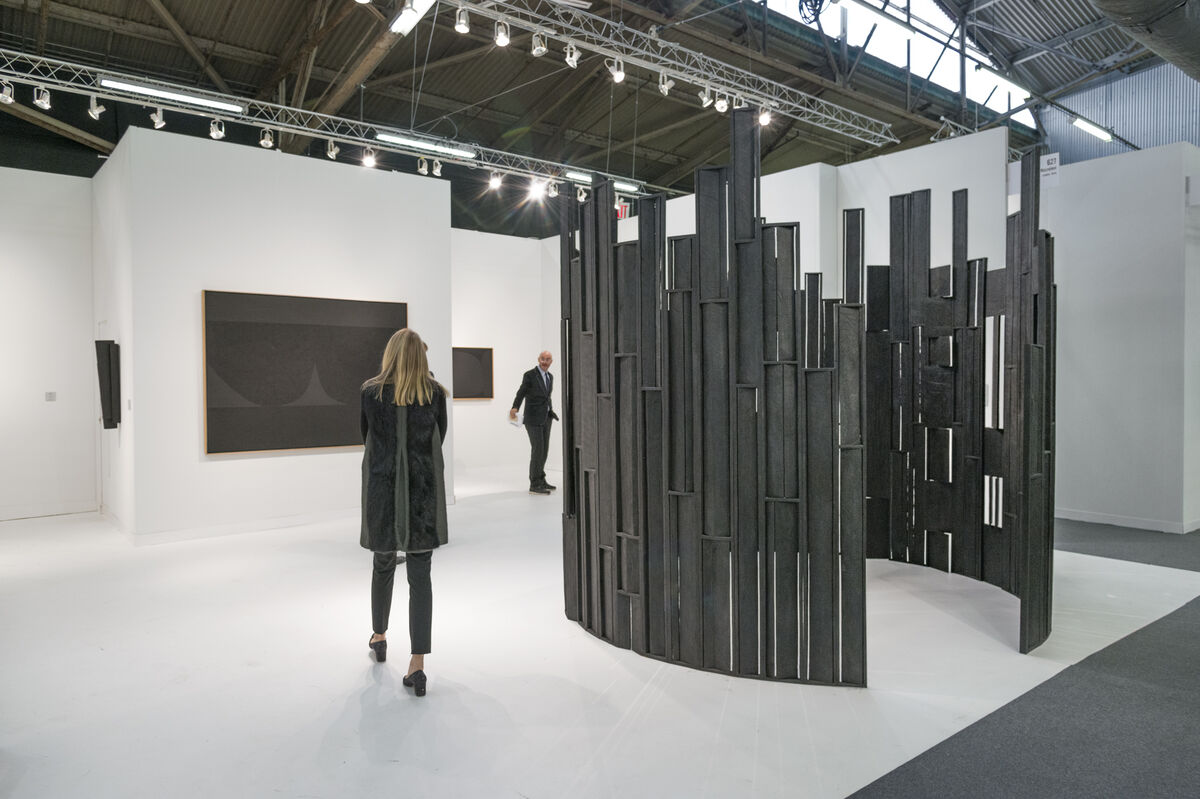 Installation view of Mazzoleni’s booth at The Armory Show, 2016. Photo by Adam Reich for Artsy.

The largest confirmed sale by Saturday evening was $500,000 for a work by Italian painter
Alberto Burri
from London and Turin’s Mazzoleni Galleria d’Arte, who moved to Pier 94 this year after three years on Pier 92. The gallery mounted a two-man show at Armory, juxtaposing Burri with works by
Nunzio
, winner of the Duemila Prize at the Venice Biennale in 1986. Two of Nunzio’s works—a lead piece and a burned wood sculpture—had also sold by Friday evening. Mazzoleni’s more prominent positioning on Pier 94 speaks to increased fervor on the art market for works by Italian post-war artists like Burri, who have been among the best performers of the past 12 months. “Everybody is just beginning to realize how important the post-war Italian movement was for the international art scene,” said the gallery’s founding director Luigi Mazzoleni of the rise in interest. This increase in interest has been headlined by
Lucio Fontana
, but has been an equal boon to his peers. (Burri’s Sacco e rosso, ca. 1959, sold for a record £9.1 million at Sotheby’s London in February, the same work having sold for only £1.9 million in 2007.) “It was undervalued before,” said Mazzoleni of post-war Italian artists’ work. “Now they’re getting what they deserve. And I’m investing all my time and money into doing what I can to help.”
Two galleries’ booths—Lisson and Sprüth Magers—served as something of a preview of their entrees into the U.S. market, with Lisson opening its first American gallery in New York this May and Sprüth Magers having just unveiled its Los Angeles location, also its first in the U.S. “Given our imminent plans to expand in the U.S. this spring, the fair was particularly important and successful for us this year,” said Lisson’s Alex Logsdail of The Armory Show, where they sold works by
Tony Cragg
and
Spencer Finch
(prices for which ranged from $50,000 to $200,000) as well as pieces by
Stanley Whitney
,
Ryan Gander
, and
Julian Opie
(these went for undisclosed sums). However, by press time, no sales had been confirmed of works by two of the artists who will follow
Carmen Herrera
in inaugurating Lisson’s New York space:
John Akomfrah
(snatched last year from Carroll / Fletcher, following major critical reception at the Venice Biennale) and
Ai Weiwei
.
Sterling Ruby
’s imposing steel sculpture MS40-2947 (2010) started off the sales at Sprüth Magers’s booth, being picked up by a Middle Eastern private collection for $175,000.
Analia Saban
’s Burlap Rag (2015) also went to the Middle East for $28,000. A handful of pieces by
Michail Pirgelis
sold on opening day for €20,000–30,000. By day two,
George Condo
’s Primitive Modern Head (2012) set a new high for the booth, going for an undisclosed sum that past performance indicates would be comfortably in the mid-six figures. Condo will follow
John Baldessari
’s exhibition at Spüth Magers’s L.A. outpost—one which director Andreas Gegner said “people were queuing around the block” for during the opening. “The U.S. has always been our strongest market,” said Gegner of the impetus to make the move. “We were following that enthusiasm through our presence in Los Angeles.” 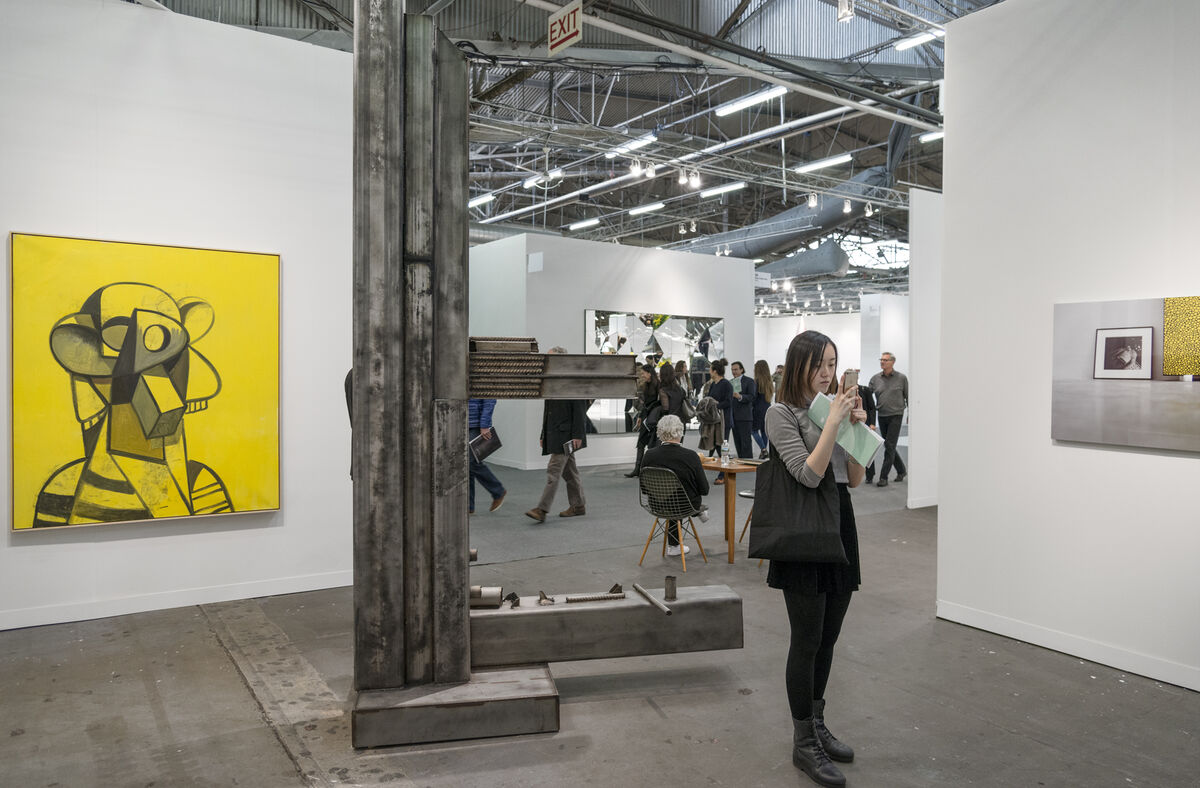 Installation view of Sprüth Magers’s booth at The Armory Show, 2016. Photo by Adam Reich for Artsy.

Advertisement
One of three Brazilian galleries new or returning to the fair this year after a hiatus, Galeria Fortes Vilaça presented one of the Armory’s most ambitious set-ups, rehanging their booth with a different two-person show each day. “We decided to do a small booth this time, but we still wanted to be able to show our artists in the best way possible,” said the gallery’s Alessandra d’Aloia. “People are responding to it very well,” she added, citing sales of a $75,000 painting and a $36,000 work on paper by
Janaina Tschäpe
, who showed on Friday, as well as three works by
Agnieszka Kurant
in the range of $18,000–25,000. “We wanted to get back into the New York market,” said d’Aloia of the gallery’s return to The Armory Show after around a decade’s absence. “This is a real New York fair.”
Düsseldorf’s Sies + Höke saw significant success with their younger artists, with two large-scale paintings by
Henning Strassburger
selling for €17,000 on opening day. Both went to New York collections, according to director Lucas Hirsch. “That’s why we’re here. We can sell them in Germany very quickly, but we want to place them here,” said Hirsch, in reference to the gallery’s efforts to continue to establish the young painter’s market in the U.S. (A major painting by the artist was also recently placed with one of Miami’s most prominent collections.) “I’ve been friends with Henning since before he started painting and before I started working at Sies + Höke. Now I work with one of my best friends,” added Hirsch of his enthusiasm to see the artist’s reception grow. The gallery had also sold an edition of
Talia Chetrit
’s Fennel (2015) for $6,000 and three works by
Claudia Wieser
for $6,500 apiece.
Among other strong sales of sought-after emerging artists were two editions of Mario Pfeifer’s two-channel video work #blacktivist (2015) at KOW, priced at $15,000; On Stellar Rays’s entire two-person presentation of paintings by
Ryan Mrozowski
and works by a new addition to the gallery’s stable,
Julia Bland
; two editions of
Natalie Czech
’s A poem by Repetition by Aram Saroyan (CD) (2016) for up to $10,000 at Kadel Willborn; ceramic-and-mirror works by
Ry Rocklen
, as well as pieces by
Brenna Youngblood
and Victoria Fu, from Honor Fraser for $3,000–50,000; and a work by
Lydia Gifford
sold by Laura Bartlett. 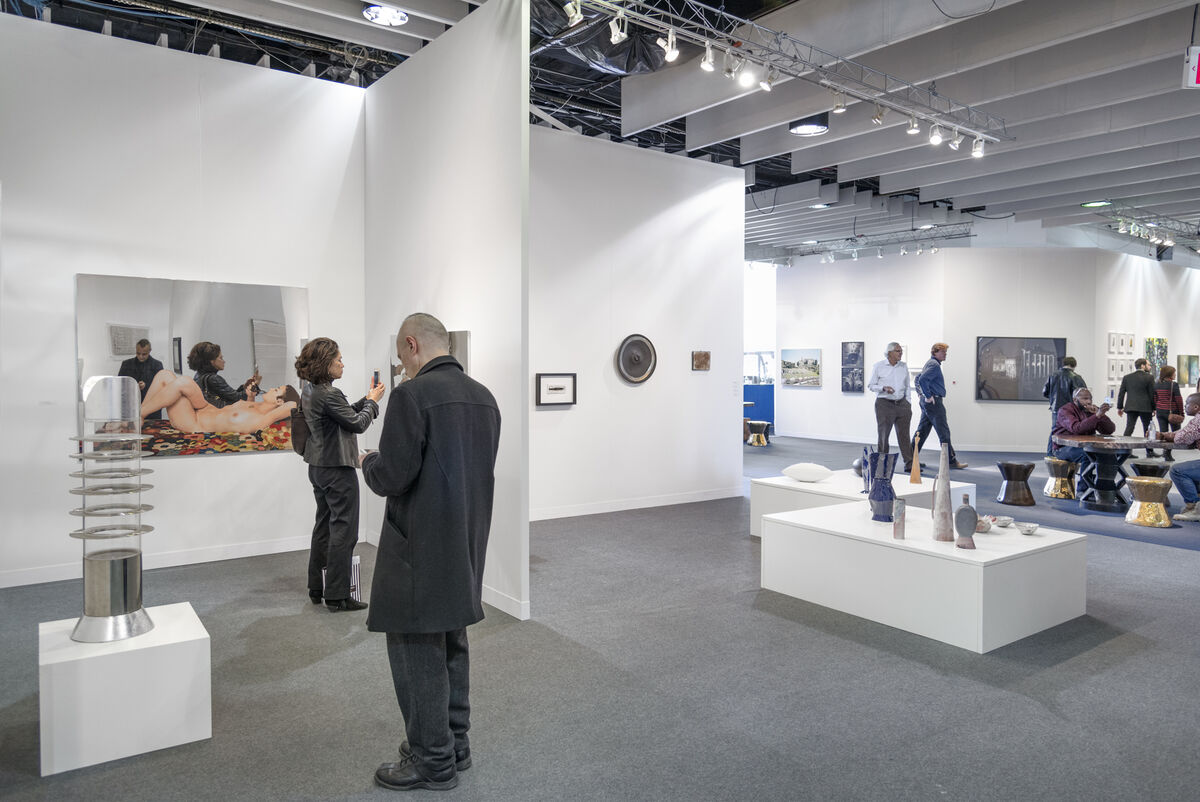 Installation view of Beck & Eggeling’s booth at The Armory Show, 2016. Photo by Adam Reich for Artsy.

If The Armory Show is any indication of what’s to come in the art market in 2016, it’s a sign that middle-market galleries may have the hardest go of it this year. Up to $10,000, and to some extent $25,000, collectors are quite willing to pull the trigger. And above $100,000—where recent reports indicate one can expect a constant rate of return on the range of 12–15% annually—more deep-pocketed buyers are still raking up pieces, too. But even for those middle-market galleries, panic should not ensue. Collectors are buying, just not at the frenetic pace of the past five years, which could be good for art anyway (if still a sting to the art market). And during the worst economic collapse since the Great Depression in 2008, the art market fared relatively well compared to other asset classes—and jumped back faster. With little to suggest that this current correction will deviate from that record, it’s time for a deep breath.
Alexander Forbes is Artsy’s Consumer Marketplace Strategist. He was previously the Executive Editor of Artsy Editorial.
Explore The Armory Show 2016 on Artsy.
Related Stories

10 Emerging Artists to Watch at The Armory Show 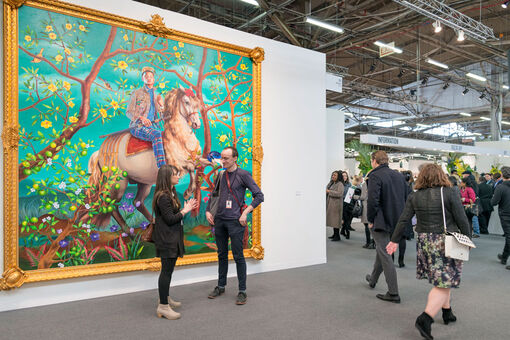 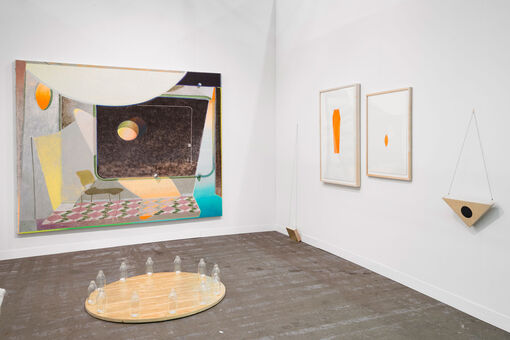