Molly Gottschalk
Feb 8, 2016 8:11pm
The 13th edition of ZsONA MACO closed last night. The fair has been largely credited for bringing the international art world to Mexico City. And for many exhibiting, this year’s edition cemented the Distrito Federal—regarded as a rising arts hub since the ’90s—as having finally grown into its hype. 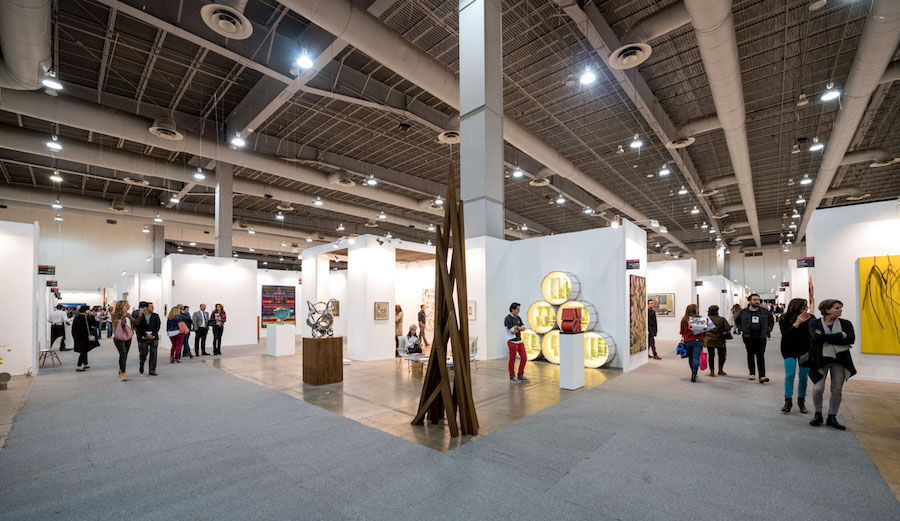 Echoing across the fair on opening day was chatter of MACO’s notoriously slow burn. Characteristic of Latin American fairs, strong sales occur for some in the fair’s first hours but explode in the last half-hour of Sunday. This is perhaps due to the recent drop in the value of the peso in relation to the dollar (the currency in which most works were priced), thus leaving collectors awaiting the fair’s end to decide on the best set of works to bring home.
There are exceptions to the rule, of course, including local gallery Kurimanzutto: “The Mexican art market is super strong,” said sales assistant Bree Zucker during the vernissage. “As soon as the gunshot goes off, we’re like a speeding bullet.” And counter to the more commonly reported mid-fair lull, by Saturday afternoon the fair’s halls were flooded with foot traffic—and many booths had been rehung with fresh stock. 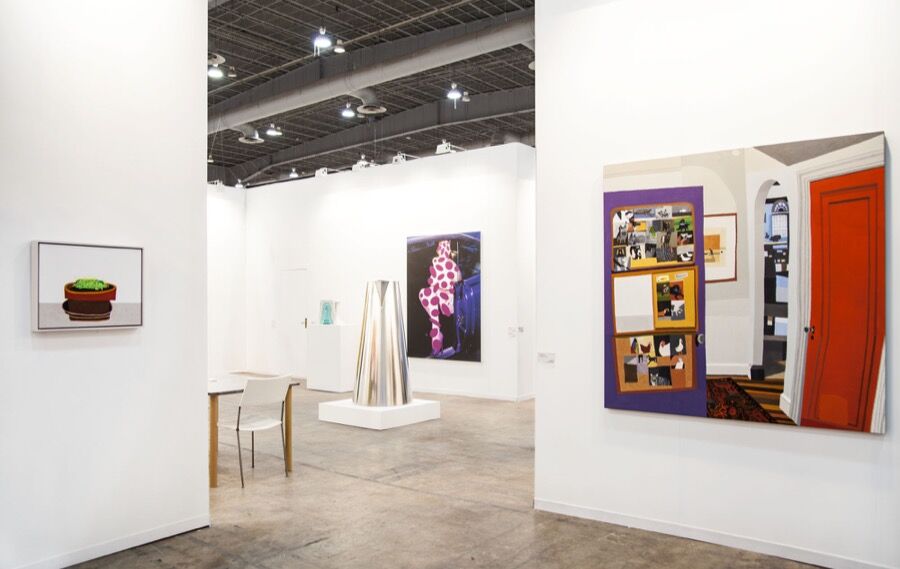 Advertisement
Perhaps ZsONA MACO’s strongest vote of confidence came from mega-dealer Gagosian, who participated for the first time this year, joining the ranks of blue-chip galleries including David Zwirner, Lisson, Paul Kasmin, and Gladstone. “I will definitely come back next year,” said Deborah McLeod, director of Gagosian’s Beverly Hills location. “It’s more than I hoped for.” She noted the savvy and enthusiasm of MACO’s predominantly local collectors. As for sales: “We’ve done very well,” the director added, indicating that works by
Ed Ruscha
and
Sterling Ruby
were in particularly high demand at their booth, where prices ranged from $17,000 to $2 million. The selection was purposefully Los Angeles-centric, the Southland being the DF’s sister city. The only problem for Gagosian at MACO? Not enough stock, according to McLeod, who said next time around, “I will bring more art.”
London and Milan’s Lisson Gallery returned to ZsONA MACO this year following a three-year absence. (Lisson’s 8,500-square foot New York gallery will open on May 3rd of this year.) Amongst a steady stream of sales on opening day, the gallery sold
Ryan Gander
’s Group Portrait- Associates, Royal Academy, London, 15 October (2007) and
Julian Opie
’s Woman with paisley dress (2015) for between £50,000 and £100,000 each.
Joyce Pensato
’s Away We Go (2016) sold on the range of $35,000–$75,00. And Bateau Sobre (2012) by
Carmen Herrera
, who will have the debut show in New York during the week of her 101st birthday, went for an undisclosed sum.

According to Lisson’s London director Claus Robenhagen, there was “overwhelming interest” in work by Mexican artist
Pedro Reyes
, whose Carrara marble and brass hand, Sundial (2015), sold on opening day for $35,000. The gallery also had Reyes’s volcanic stone Totem (2015), which sold for $80,000 later in the fair’s run.
Anish Kapoor
had a strong showing across the fair—perhaps related to his May 2016 exhibition at Mexico City’s El Museo Universitario Arte Contemporáneo (MUAC) museum—with works at Lisson as well as Gladstone, Continua, and Regen Projects. Two mirror works by the Indian-British artist were on offer for £550,000 and £400,000; sales, however, were not disclosed at the artist’s request.
At Basel’s von Bartha’s booth, director Stefan von Bartha was in high spirits, following the approximately $100,000 sale of a five-part work by
Imi Knoebel
, Anima Mundi 6-5 (2015), to a major French private foundation on opening day. The following day, an additional work by Knoebel also sold, selected by curator Carlos E. Palacios to join the Grupo Axo collection in the second edition of the Grupo Axo-ZsONA MACO acquisition award. “They just fly out of the studio, so we were really fortunate to get two and to have sold two versions,” said von Bartha of the Knoebels. On the other end of the booth, an installation of locally sourced bricks by Swiss installation artist
Daniel Robert Hunziker
(priced at $40,000), combining patterns and material found in Mexico City that reference the rich history of the ancient Maya, was an undeniable crowd-pleaser. Installed to offer a local connection, both via concept and materials, the work helped stoak high interest in Hunziker’s work from two Mexico City institutions. 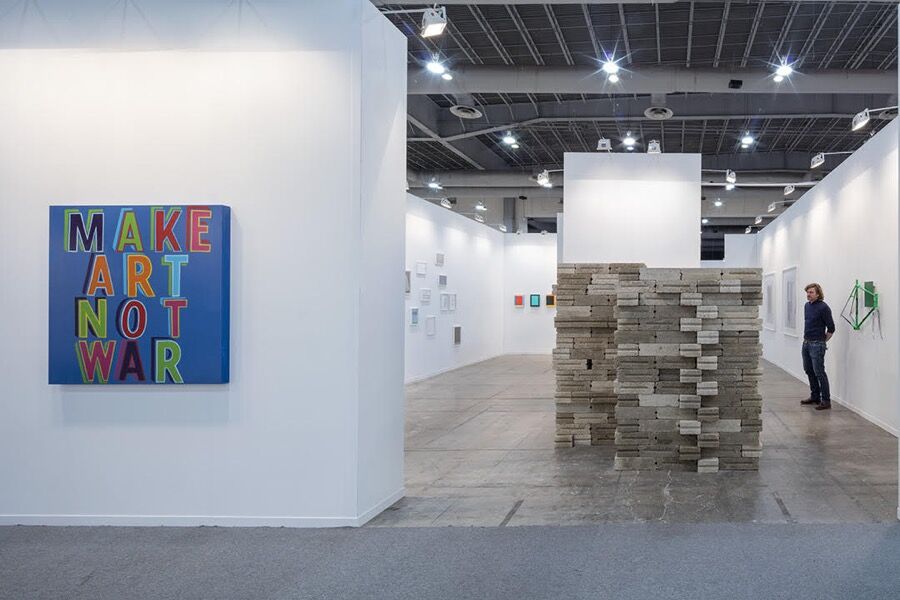 Installation view of von Bartha’s booth at ZsONA MACO, 2016. Courtesy of the gallery.

“Mexican collectors can be pretty adventurous,” said David Zwirner Gallery director Robert Goff surveying their MACO booth on Saturday. “They’re not just looking for paintings; they’re willing to go out on a limb.” This year marks the gallery’s fifth year at the fair since 2006. “Really good sales to good Mexican collections,” as the director put it, were highlighted by particularly fervent interest in work by German artist
Isa Genzken
—who has an upcoming exhibition at Museo Tamayo—including a flower-crown clad mannequin, Schauspieler II, 1 (2015). The daring bent of the city’s collectors carried on to a minimalist yarn installation (Untitled, 1976) by the late sculptor
Fred Sandback
, which had sold to a Mexican collector for an undisclosed sum. Sandback is also the subject of a much-lauded exhibition at local gallery Proyectos Monclova, extended throughout the city in three houses designed by architect
Luis Barragán
. 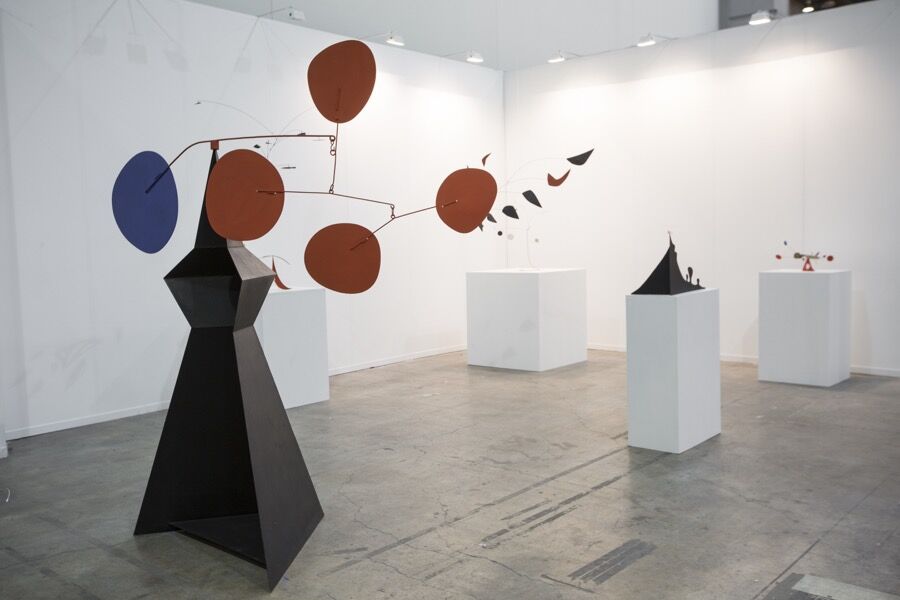 Installation view of Venus’s booth at ZsONA MACO, 2016. Courtesy of the gallery.

Likely the most expensive booth at the fair this year was Venus’s solo presentation of five sculptures by
Alexander Calder
. A standout on the curatorial front as well, which follows on the heels of the excitement around last March’s Calder exhibition at Museo Jumex, the works were priced between $1 million and $7 million. “It’s our first time at ZsONA,” said Venus director Anna Christina Furney, who was not authorized to comment on sales aside from the recurrent “It’s been great.” The crown jewel of the booth was Caged Stone and Fourteen Dots (1948). The piece is particularly rare both in terms of its composition—it incorporates a stone, which Calder collected during a walk on his property in Roxbury, Connecticut, as a counterweight—and its date. “I love it,” said Furney, spinning the piece gently. “It’s pretty magical.” 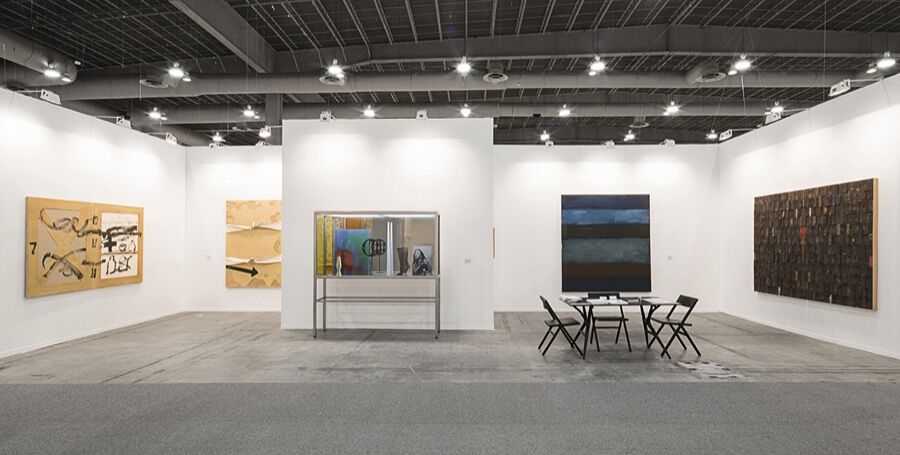 London’s Timothy Taylor, exhibiting this year for the second time, reported that the gallery’s heavy hitters,
Antoni Tapies
and
Sean Scully
, were selling quite well. (Alexandra Leive, who heads up international sales, elected not to share specifics.) The gallery also used ZsONA MACO as an opportunity to present the work of local artist
Gabriel de la Mora
, who just joined their stable and will have a solo show at the gallery in March.
Two of de la Mora’s works also hung on the outside of Mexico City-based Galería OMR’s booth, including a new series—vintage silver gelatin prints onto which speakers have been playfully affixed in places one might expect to emit sound—several of which had sold for $8,000. According to gallery director Kerstin Erdmann, there was much buzz around
James Turrell
’s installation Magnatron (1999), priced at $250,000. However, works by Guadalajara-born artists
Jorge Méndez Blake
and
Jose Dávila
had, so far, garnered the most sales at the fair.
“Jose Dávila is one of our most successful artists,” Erdmann noted, rounding the booth’s corner to stand before the artist’s cardboard boxes created after
Donald Judd
’s stacks (Untitled, 2015), which had sold for $65,000 to an important European collection. Inside the booth, Dávila’s marble and glass sculpture, Untitled (2016), priced at $45,000, had not sold as of Saturday afternoon, but it had led one of Mexico City’s esteemed private collections to commision a marble work for their garden. Absent from the booth by mid-fair was an outer wall of six drawings by Dávila, priced individually at $20,000 a piece, sold out—and with a long line of collectors on the waitlist for more.
Another local gallery, Marso, had sold half of its booth by Saturday, according to founder and director Sofia Mariscal. The booth’s centerpiece, a totemic work titled Sculptures pour tremblements de terres (2015), was created by young French artist
Théo Mercier
, newly signed to the gallery, during a residency at Mexico City’s artist-run nonprofit Casa Maauad. Created from wood recovered from collapsed buildings in Mexico City and clay found throughout the city, the work was sold to a private collector for $15,000.
Though galleries at ZsONA MACO trended toward showing more established names this year, interest in emerging art remained strong. Future Gallery’s Sira Piza spoke of an enthused local collector who came in during the last 10 minutes on Thursday evening, wanting to buy out the entire set of tondo digital abstractions by young Finnish artist
Jaakko Pallasvuo
. (Though, by Saturday evening, she hadn’t yet returned to seal the deal.)
Across the fair, international and local dealers alike gushed about their affection for both MACO and Mexico City. “It’s not just tequila-induced,” one joked. Meanwhile, visiting exhibitors spoke candidly of their excitement to build upon—or forge new—networks amongst highly engaged collectors in a city that, the consensus agrees, has truly come into its own. Although there’s no doubt that the arrival of major museums like Museo Jumex in 2013 and its ever-growing cadre of innovative gallery programs have helped foster Mexico City’s art community, ZsONA MACO has made incredible strides to put this city in boldfaced letters on the international art world’s map.
Molly Gottschalk is Artsy’s Lead Visuals Editor.
Explore ZsONA MACO 2016 on Artsy.
Related Stories