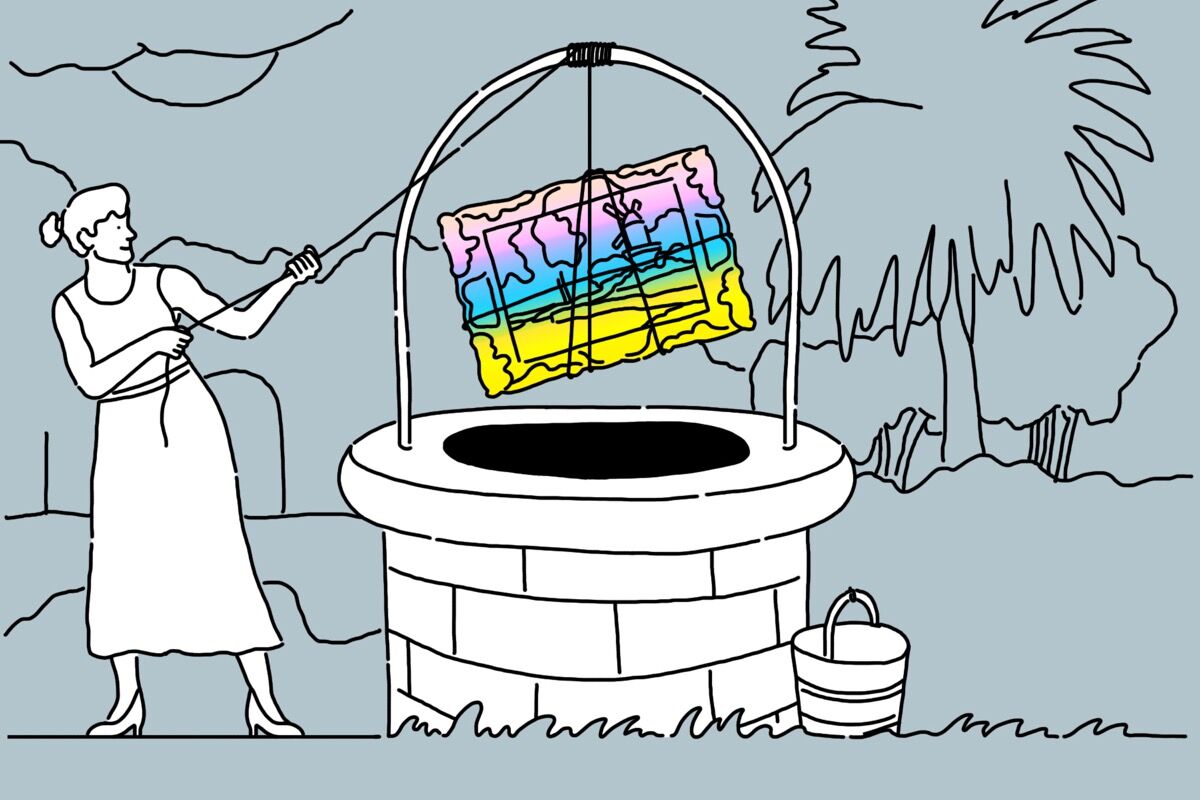 There—between a trunk of your great-great grandmother’s letters and a box of tacky Christmas ornaments—you see it. A painting, tucked deep into a shadowy corner of the attic. You think back to the French family who, while investigating their leaky roof, stumbled upon what some experts have declared a long-lost
Caravaggio
worth $136 million. Is this it? Have you finally found your masterpiece?
Don’t get your hopes up. “Ninety-nine percent of inquiries we get, maybe even 99.9 percent, are junk, or they’re reproductions,” said Debra Force, a New York art dealer and regular appraiser on PBS’s Antiques Roadshow. Below, find five steps informed by expert advice to determine if you’re part of that lucky 0.1 percent.

1. Give the artwork a once-over.

After years spent working at Sotheby’s, Deborah Spanierman, an appraiser and president of DGS Fine Art Consultants, Inc., said she’s developed a “second sense” about authentic work. For those of us lacking an extensive art-historical background, however, there are a few signs that may indicate whether or not your artwork is the real deal. Force suggests determining the medium first; in some cases, it may be noted on a label affixed to the work. If not, there are some rules of thumb you may follow. If it’s an oil painting, for example, the brushwork should have left some visible surface texture. If it’s mounted behind glass, there’s a good chance it’s a print of a painting, not the painting itself. And, of course, check for a signature or monogram. “Sometimes the painting is really dirty, and you can’t tell at first glance,” Force noted. “But if you illuminate it with a flashlight and use a magnifying glass, you can usually ascertain if something is signed or not.”

So, it looks like a
Renoir
. Or maybe a
Monet
. Or—okay, fine, you have no idea who it is. Your first move is to find a knowledgeable advisor who can help in identifying the artist. One option is Antiques Roadshow, where appraisers will offer opinions about your work’s origin. Potential downsides include the show’s restricted schedule—it only tapes during the summer in certain cities—and the extensive wait time. “Especially at the fine art table, people are often lined up starting at five in the morning,” Spanierman said. “We work until seven or eight at night to see every last guest, and we don’t have a lot of time with each one of them.”
Alternately, you can reach out to a local gallery or a dealer, or search online for an appraiser (the Antiques Roadshow website lists contact information for those who have appeared on the show). An auction house is another resource. If you have a sense of the work’s style (
Impressionist
?
Abstract Expressionist
?) or region (European? Asian?), email an image and accompanying details to the corresponding auction department. If you’re uncertain, many auction houses also have generalists, who can direct your queries to the appropriate specialist. Force, who served as senior vice president and head of the American Paintings department at Christie’s in New York, recommends approaching a major auction house like Sotheby’s or Christie’s if you think you truly have a masterpiece. “Especially if we’re dealing with
Old Masters
, or European art or Asian art, you want a firm that has international representation,” she said. “A lot of times if you go to a local auction house, although they’re very fine, they don’t have the necessary expertise.”
Finally, you may choose to reach out to a curator at a local museum. Force actually recommends this route—“they may be the most objective,” she said—but this is only feasible if you know enough about your painting to select a curator with expertise in the appropriate area of art history.

So you’ve got a name—either via a knowledgeable source or through your own sleuthing. Now it’s time to hit the books. A catalogue raisonné is a publication that brings together all of an artist’s known work, and serves as “the resource that most dealers and auction houses and buyers refer to first,” said Katy Rogers, president of the Catalogue Raisonné Scholars Association. “If the work is not in there, it raises a red flag.” These volumes can be found at an art library, although in recent years these projects have also begun to migrate online.
Using the catalogue as reference, check to see if your work has a match. Even if it’s not pictured, don’t throw in the towel yet. Rogers, who also heads the
Robert Motherwell
catalogue raisonné project, said that some works in Motherwell’s oeuvre are known only through written documentation from gallery shows. In any case, it’s preferable to have an expert to guide you through the process. “For the novice trying to look in catalogues raisonnés, there are lots of nuances,” Force said. “It really is helpful to have someone with you, rather than just doing it alone.”

The team who compiled the catalogue raisonné is a good place to start. You can also comb the internet for names, although Force notes that it is much easier to get in contact with an expert if you’re working with a museum, auction house, or gallery. Authentication doesn’t come cheap, either—independent experts (generally academics, although sometimes family members) usually charge for their services. Force said the minimum fee hovers around $500 and can go much higher depending on the artist and the potential value of the work. Some experts, like Whistler scholar Nigel Thorp in Scotland, prorate depending on the medium. Experts attached to institutions, on the other hand, don’t have a fee.
Catalogue raisonné projects, like the one for Motherwell at the Dedalus Foundation, sometimes have an authentication committee—although according to Rogers, it’s become increasingly less common. Lawsuits levelled by disgruntled collectors have knocked out several committees, most notably that of
Andy Warhol
. If this is the case for your artist, consider reaching out to the International Foundation for Art Research (IFAR). This independent committee of experts is willing to give opinions on a wide range of works (most recently they evaluated the fake
Pollock
works involved in the Knoedler scandal).

5. Prepare for the moment of truth.

If you’ve contacted the appropriate expert and they’ve expressed interest in the piece, you will likely be required to send them the work so it can be evaluated in person. In the case of the Dedalus Foundation, individuals must fill out a contract that states that they are the owner of the work and that the foundation’s decision is an opinion subject to change. The catalogue raisonné committee meets twice a year, and works that have been sent in are returned with one of three letters stating that a) the work would be included in Motherwell’s catalogue raisonné, b) it would not, or c) the committee is unsure at this time.
If your work was shipped off to an independent expert, particularly one in Europe, Force said they often provide certificates of authentication or assign the work an identification number. “Some experts are very precise and very official,” she said. “Some might write a general letter. Some just do verbal. But generally speaking, if you’re paying them, they give you proof that it’s a valid work.”
What’s next? “If it turns out that your work is truly authentic and it’s not a fake, a forgery, or just wishful thinking, then it’s time to find the appropriate market for your work of art,” Spanierman said. What happens to your masterpiece after that is up to you.
And perhaps you should consider checking the basement, too.
Abigail Cain
Illustration by Jan Buchczik for Artsy.
Related Stories