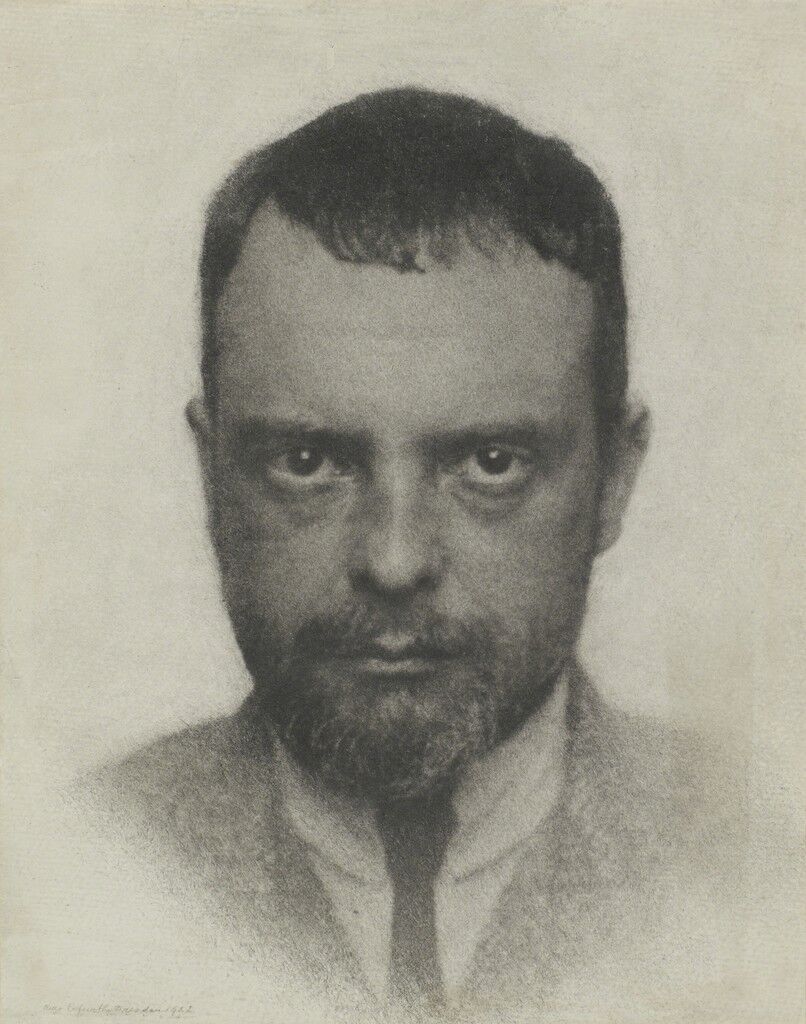 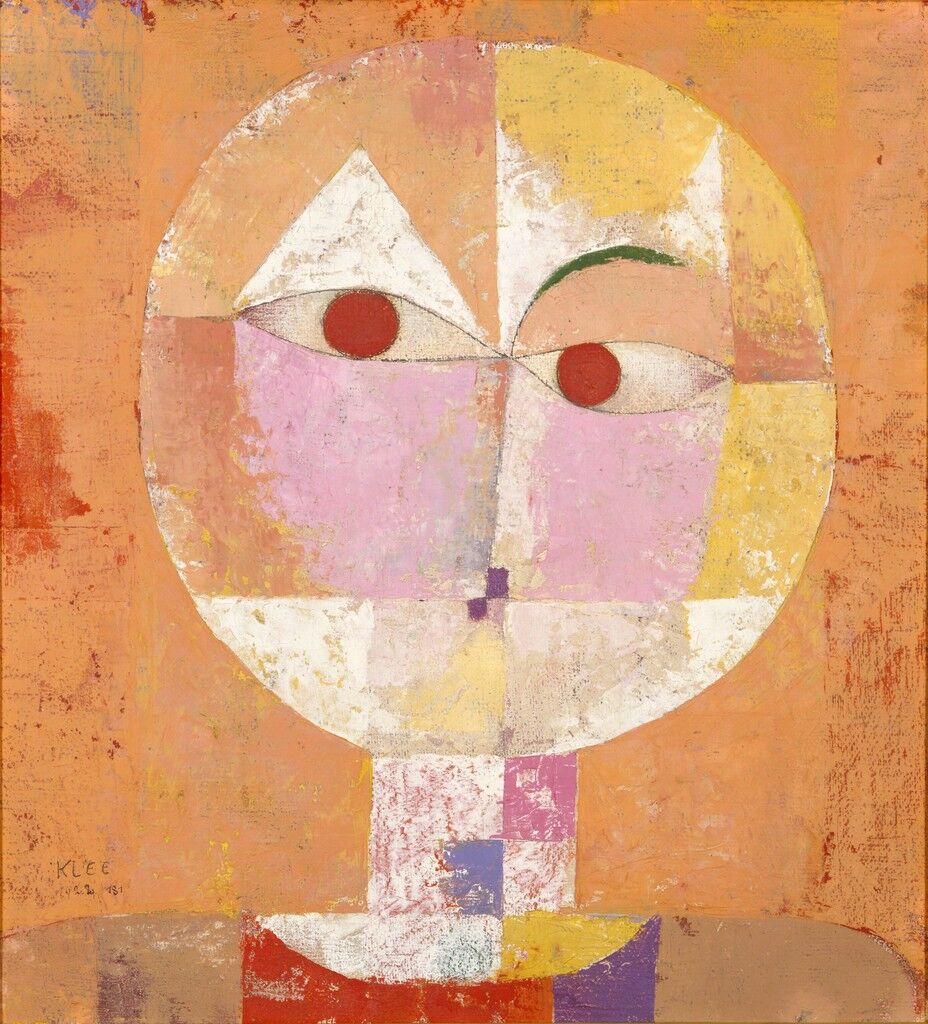 Paul Klee
Senecio, 1922
Kunstmuseum Basel, Basel
Paul Klee
(1879-1940) has been called many things: a father of abstract art, a
Bauhaus
master, the progenitor of
Surrealism
, and—by many an art historian and fan (members of his cult following affectionately refer to each other as “Klee-mates”)—a very hard man to pin down. Indeed, the Swiss-German artist’s paintings are tied to numerous groundbreaking 20th-century movements, from
German Expressionism
to
Dada
. But Klee’s body of work isn’t easily bucketed into a single category, thanks in large part to the system of throbbing forms, mystical hieroglyphs, and otherworldly creatures that he developed to populate his compositions.
These symbols marked some of the first efforts in the 20th century to embed spiritual content and the subconscious into abstract art. In turn, they inspired both
Surrealism
and
Abstract Expressionism
, whose influential practitioners, from
Joan Miró
and
Salvador Dali
to
Mark Rothko
and
Robert Motherwell
, cited Klee as a lodestar. This spring, Klee’s enigmatic but influential work is celebrated at Paris’s Centre Pompidou in “L’ironie à l'oeuvre” (“Irony at work”). What follows is an exploration of the many influences and aftershocks of the artist’s strange and singular work.

In the early 1900s, Klee radically broke with a millennia-old tradition in art: the faithful representation of objects and environments from the real world. Along with
Picasso
and other turn-of-the-century, avant-garde artists, he jettisoned recognizable content, contributing to a form of art that would come to be known as “abstraction.” Klee was an early adopter of this movement and a member of one of German Expressionism’s regional factions,
Der Blaue Reiter
, a Munich-based group of artists founded by
Wassily Kandinsky
and
Franz Marc
, and bound together by the belief that art should express the metaphysical realm. 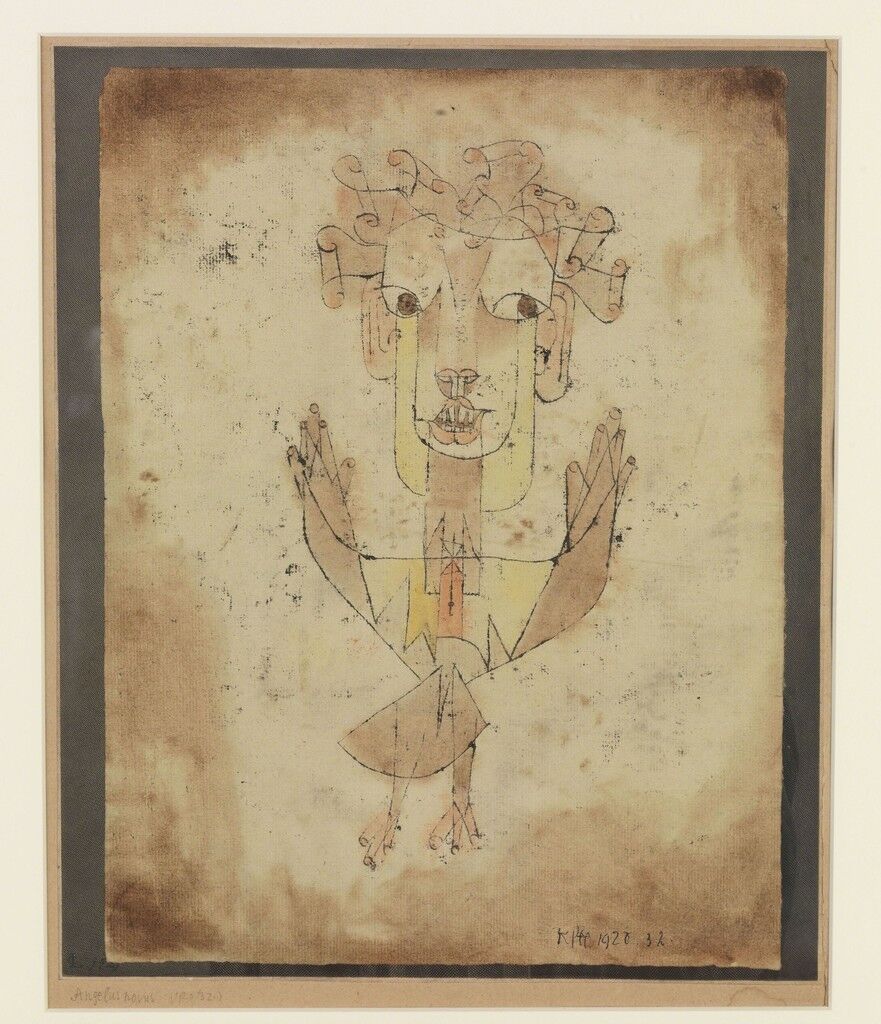 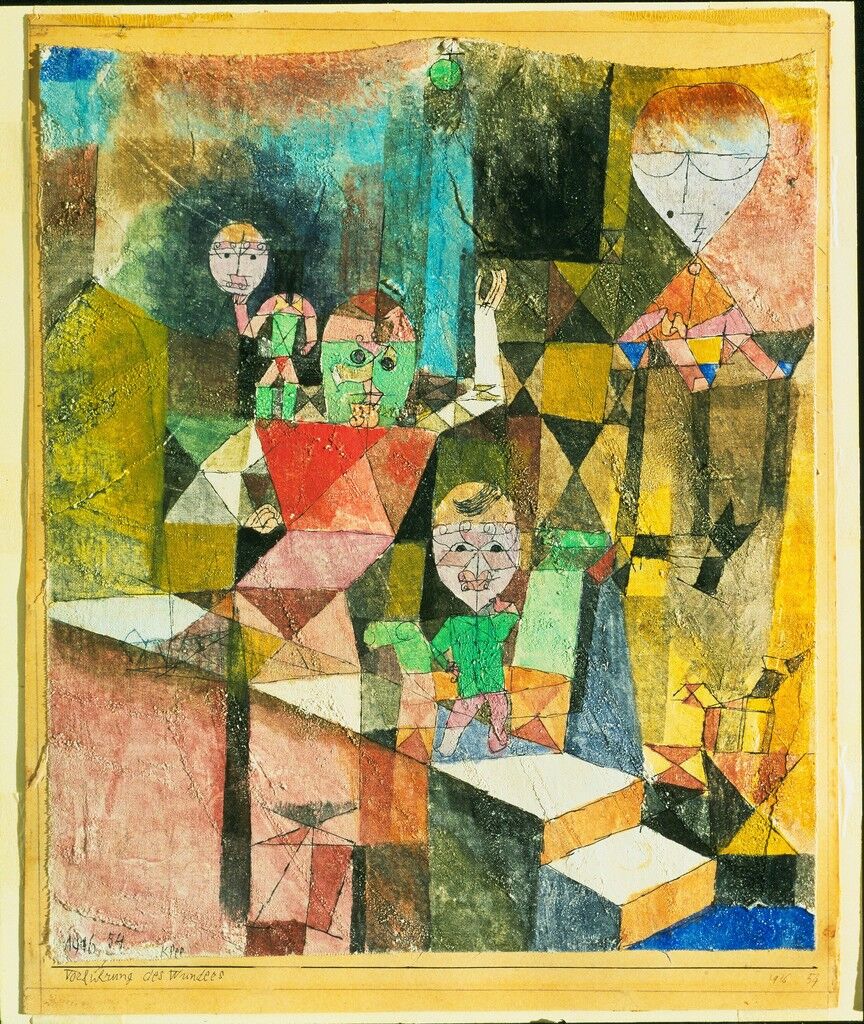 Paul Klee
Présentation du Miracle, 1916
"Paul Klee: L'ironie à l'oeuvre" at Centre Pompidou, Paris
This interest was galvanized with the onset of World War I and the deaths of his peers
August Macke
and Marc in battle (in 1914 and 1916 respectively). As the traumas of war continued, abstract artists like Klee sought refuge in forms of expression that were divorced from the material world. The pictures he and his fellow artists produced teemed with lines and colors that crashed together ecstatically—and when representational elements did crop up, they were fantastical, as in Klee’s 1916 painting Présentation du Miracle. Kandinsky’s manifesto “On the Spiritual in Art” (1911) served as Der Blaue Reiter’s sacred writ and inspired not only Klee’s early paintings but also his own seminal text, “Creative Credo” (1920), whose punchline, “Art does not reproduce the visible; rather, it makes visible,” influenced both his contemporaries and his Surrealist scions.
It also caught the attention of
Walter Gropius
, the founder of the Bauhaus school in Weimar, which united art and craft and stressed function as well as form. Gropius invited Klee to teach there in 1920; Kandinsky followed in 1922. There, they worked alongside a diverse group of artists, including Johannes Itten,
Lyonel Feininger
, and
László Moholy-Nagy
(who will receive a retrospective at New York’s Guggenheim later this year). Klee and Kandinsky’s lessons helped formalize the tenets of abstract art and modern design. Klee’s description of drawing as a “line going for a walk,” for instance, epitomizes his signature approach to artmaking—one that animated the elements of art (the line) with movement, spontaneity, and even an element of magic (going for a walk).

11 Images
View Slideshow
Advertisement
It was this sense of magic, embodied in works like Image Tirée du Boudoir (1922) and Klee’s use of spontaneous or “automatic” drawings as the basis for his paintings, that caught the eyes of Surrealists, who included Klee’s paintings in their first group exhibition in 1925.
André Breton
cited Klee as an inspiration in his first Surrealist manifesto. The pioneers of Dada were intrigued, too, and featured Klee’s work in Zurich’s Galerie Dada in 1917.

Klee was a voracious reader and lover of music (he was also a beautiful writer and a gifted violinist). Even when filled with squares and rectangles, his paintings—like Redgreen and Violet-Yellow Rhythms (1920)—pulse with rhythm motivated by the modulations of Mozart and Bach, or the cadence of poems by Apollinaire and Rilke, another close friend of Klee’s. He was also interested in the art of children and those suffering psychological disorders, which he regarded as pure forms of expression (he believed they had the “power to see”), and the hieroglyphs of African languages and art. A 1914 trip to Tunisia with Macke and Louis Moilliet deeply affected Klee, inspiring his rich color palette and distinctive language of mystical symbols (glowing stars and suns, topsy-turvy checkerboards, disembodied heads) that he would evolve over the course of his career. 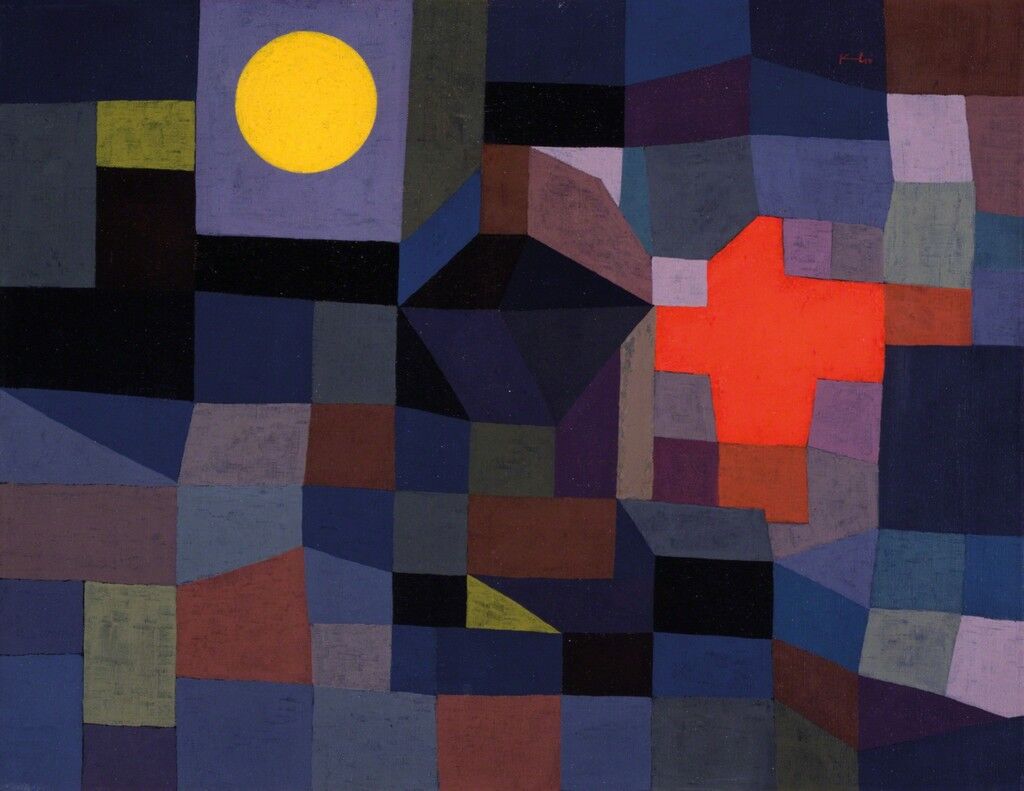 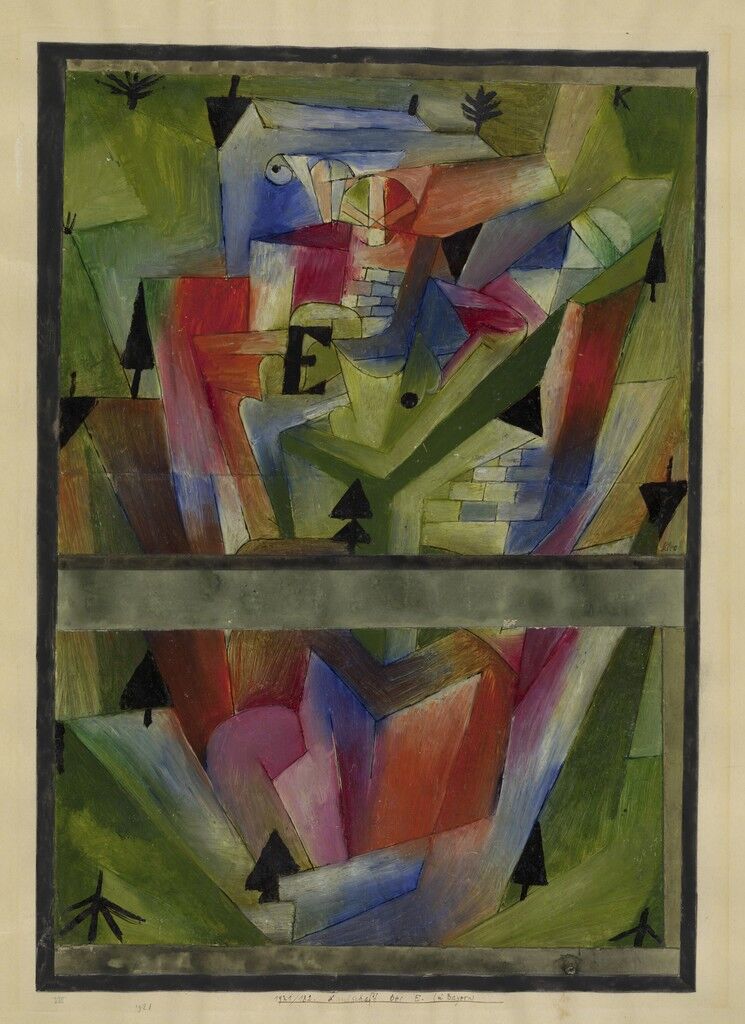 Paul Klee
Paysage près de E. (en Bavière), 1921
"Paul Klee: L'ironie à l'oeuvre" at Centre Pompidou, Paris
Klee also came of age during a time of groundbreaking experimentation in art across Europe. When he relocated to Munich in 1898 at the age of 19 to study painting, artists were beginning to move away from representing what they could see, and beginning to paint psychologically charged subject matter (
Van Gogh
), and studies in color, pattern, and light (
Matisse
). But it wasn’t only Klee’s predecessors who informed his work—his peers were integral to his artistic development, too.
Perhaps his greatest inspiration and ally was Kandinsky, a godfather of abstraction, as well as the Munich-based group’s other members, Macke, Marc, and
Alexej von Jawlensky
. In 1911, Klee discovered Picasso’s Cubist compositions, which he referenced in Hommage à Picasso (1914), and less overtly in Paysage près de E. (en Bavière) (1921) and Senecio (1922)—paintings that quote the fractured perspective and prismatic forms of the Spanish master. (Klee respected Cubism, but also sought to veer away from what he considered its lack of vitality.) 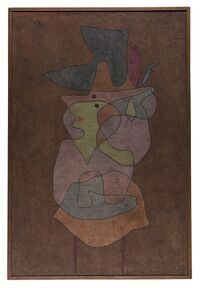 9 Images
View Slideshow
He also looked to
Robert Delaunay
’s lyrical patterns and transcendent color palette; the unprecedented sense of movement introduced by the
Futurists
; the strange machines and automations conceived by the
Dadaists
; and the pure forms of
Constructivism
and
Suprematism
, which surrounded him at the Bauhaus.

Why are we still talking about him? 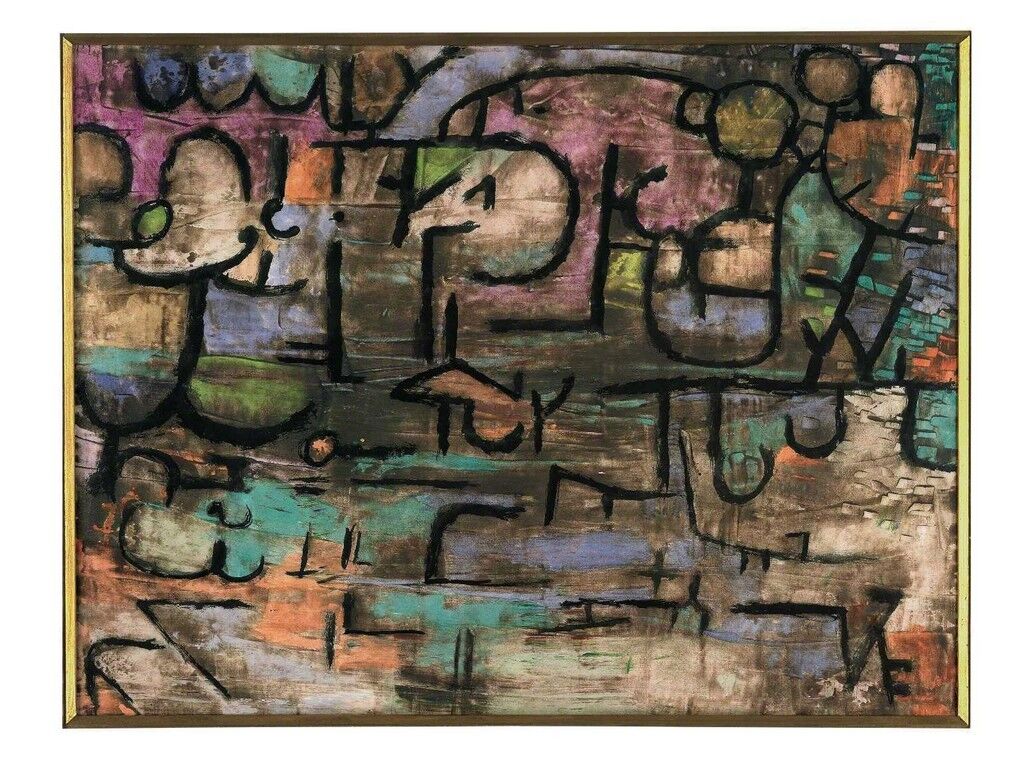 Paul Klee
nach der UeberSchwemmung (After the Flood), 1936
Fondation Beyeler
Klee was one of a group of artists in the early 1900s who indelibly changed the course of modern art and influenced generations of artists. His place in the art-historical canon ensures we’ll be talking about him for decades to come. What’s more, though painting was declared dead following its prominence in the mid-20th century, the medium surged to the forefront of contemporary art again years later and is now back in vogue, as is art created by “outsiders.” Klee’s interest in the subconscious and those deemed insane—and his work’s engagement with these ideas—resonates with today’s fascination with art created by those outside of the establishment, including disabled people and practitioners of occult traditions.
Alexxa Gotthardt