Anna Kats
Jun 6, 2016 8:20pm
Nearly a month after Zaha Hadid’s sudden death on March 31st, her first posthumous building, the Salerno Maritime Terminal, was inaugurated in Salerno, Italy, near the Amalfi Coast. What might otherwise have been a relatively brief, routine affair involving local politicians and a small coterie of representatives from Hadid’s namesake firm in London became instead an elegiac celebration of her life and work in the aftermath of the heart attack that killed the Pritzker Prize laureate at 65. Half of Hadid’s 400-person staff flew in for the occasion, posters of the architect were plastered across the port town, and Italian Prime Minister Matteo Renzi presided over part of the ceremony. Hadid was conspicuously absent, but her building—and her legacy as a champion of algorithm-generated, computational architecture—cast a long shadow over the gathering.

The tribute now continues several hundred miles north of Salerno in Venice, where a retrospective exhibition of Hadid’s oeuvre, hosted by Fondazione Berengo, is on view at the Palazzo Franchetti. Especially significant due to the fact that it developed internally at Zaha Hadid Architects, the show, which was organized by Manon Janssens, the firm’s in-house head of exhibitions, contains pieces from Hadid’s archive and documents the beginnings, rise, and imminent future of the practice she founded in 1979. By the firm’s own admission, the survey is patchy, far from comprehensive. Originally planned as a small display of new research, the career-wide show morphed into its current expanded state during the several months since Hadid’s passing.
Paintings, sketches, renderings, scale models, and 3D-printed research ephemera are crammed into 10 of the Venetian-Gothic Palazzo’s second-story rooms. The result amounts to a testament to Hadid’s ingenuity as an architect who expanded the possibilities of both design and construction by focusing on the digital frontier, applying software and algorithmic modeling to the end of rendering curves that would seem unimaginable—irrational even, or altogether unbuildable—if drawn by the human hand. The first of these chambers is devoted largely to her early work, and includes some of the most visually stunning pieces in the entire show—Hadid’s
Constructivist
and
Suprematist
-inspired paintings, some of which cite
Vladimir Tatlin
and
Kazimir Malevich
by name in titles, a way of honoring her indebtedness to their experimentation with geometric abstraction nearly a century ago. Advertisement
But whereas Tatlin and Malevich pursued their design work with political goals, her own experimentation was primarily formal. The remaining rooms document the evolution of Hadid’s geometries (by and large, her early rectilinear angles become curvilinear forms as the algorithms used by her firm become increasingly sophisticated) and testify to her devotion to digital design technologies as the means toward the constant experimentation so often cited in her obituaries. The Salerno Maritime Terminal, and more than 35 forthcoming projects that the firm is currently working on represented in the exhibition, show that Hadid applied her design methodology uniformly upon developing its mature form.
Though Hadid’s retrospective runs concurrently with the Venice Architecture Biennale (both close on November 27th), her memorial exhibition shares very few sentiments with the projects and proposals on view in the Giardini, the Arsenale, and at national pavilions scattered throughout the city. The Biennale, directed by fellow Pritzker winner Alejandro Aravena, skews heavily toward the work of young, relatively unknown practices that posit architecture as an inherently sociopolitical act, one with a responsibility to address the needs and material realities of poor and disenfranchised constituencies the world over. As a litmus test of the present architectural zeitgeist—especially among the generation of designers that will rise to prominence in the coming two decades—the Biennale suggests that emerging practitioners are far less interested in the kind of formal experimentation and large-scale building projects to which Hadid and many of her contemporaries in the profession’s star system lay claim.

In fact, Hadid’s exhibition fails to address the questions lobbied time and again by many of her critics, who took issue with the political implications of her designs during her lifetime; based on her retrospective, they’ll likely have reason to continue to do so as the firm carries on without her. Can a building generated by algorithm be responsive to its context, and can its design take surroundings, site, and the socioeconomic circumstances within which it is built into consideration? What kind of political compromises should an architect be willing to make, in order to see his or her work built? It is especially telling to find these and related concerns—among the driving themes of the 2016 Venice Architecture Biennale—altogether ignored at the Palazzo Franchetti.
In the aftermath of Hadid’s death, her firm will be led by Patrik Schumacher, a longstanding design partner who served as co-designer on her first major built commission, the 1993 Vitra Fire Station. Schumacher coined the term “Parametricism” in 2008 to describe the firm’s algorithmic process, and has since served as Hadid’s chief propagandist and design philosopher. Under his tutelage, the Venice retrospective makes clear, her firm will continue to do precisely what she did so well in life: Refine her formula, and apply it.
Anna Kats
Zaha Hadid is on view at the Palazzo Franchetti, Venice, May 27–November 27, 2016.
Related Stories

The 10 Best Pavilions at the Venice Architecture Biennale 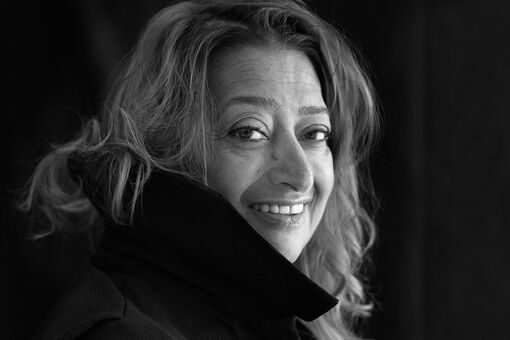