What Happens to Whitney Biennial Curators after the Show’s Over? 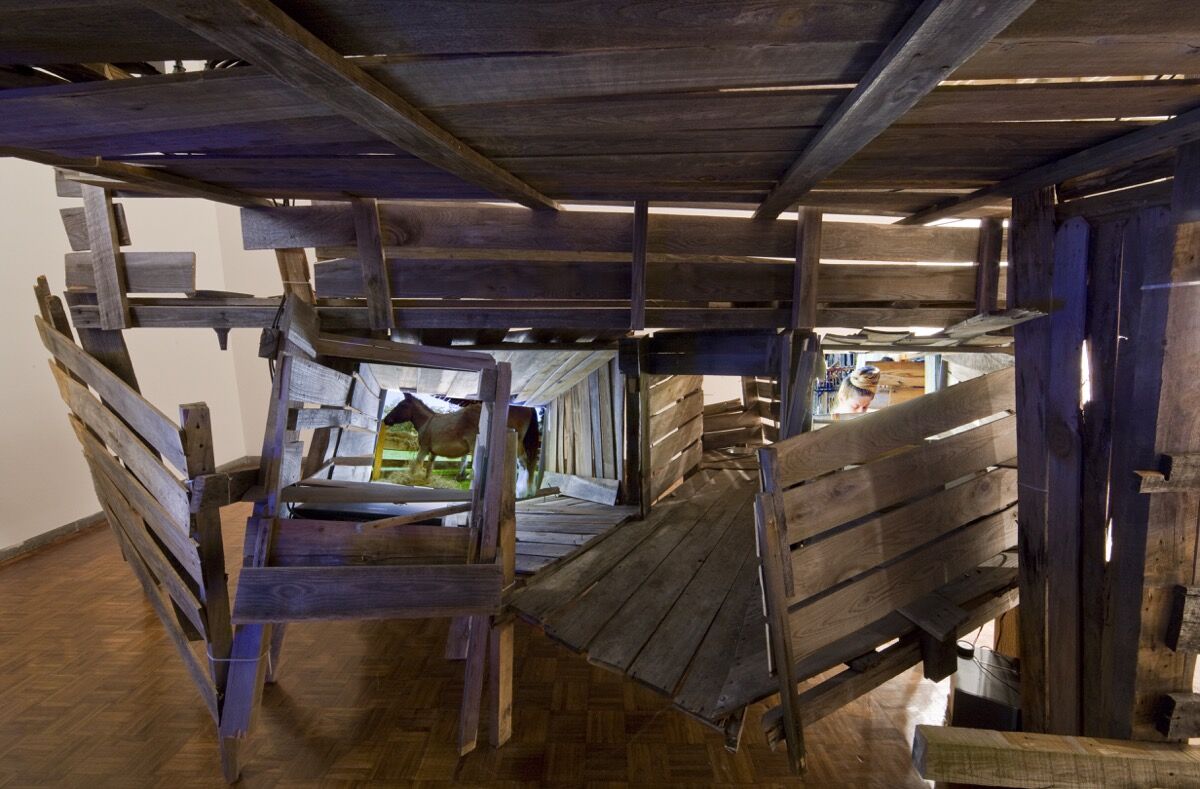 Installation view of Mika Rottenberg, Cheese, 2007–08, at the 2008 Whitney Biennial. Photograph by Sheldan C. Collins, courtesy of the Whitney Museum of American Art.

Inclusion in the Whitney Biennial—the influential and sometimes controversial snapshot of contemporary American art that takes place every two years—has launched or resuscitated many an artist’s career. But those tapped to do the selecting have experienced their own professional transformation, as this year’s organizers Christopher Y. Lew and Mia Locks may well discover.
“For any young curator who’s put in that position, it’s kind of a dream to be able to make a choice of an artist and take a position,” says Gary Carrion-Murayari, who as an associate curator at the Whitney was chosen as the millennial counterpart to Francesco Bonami to organize the 2010 biennial. “That’s how you build a curatorial profile. And to have that be on such a big stage, that’s a once in a lifetime opportunity.”
In conversations with a sampling of curators from the last several biennials, all recalled being surprised to have been picked as part of the team and excited by the free reign they were given to canvas the country.
“It almost has a quality of a military mission where you go out and survey and bring back your findings,” says Jay Sanders, who was asked by Whitney curator Elisabeth Sussman to co-organize the 2012 biennial with her when he was the gallery director at Greene Naftali. Back then, he had never organized an exhibition at a large institution.
What Sanders and Sussman discovered was a critical mass of artists working in dance, music, and theater, prompting them to create an open performance space on the Breuer building’s fourth floor. The show’s spotlight on performance and multimedia in turn helped to shape the vision for the new Whitney building, which opened in 2015 with a state-of-the-art theater and “floating” wood floors over neoprene pads throughout the galleries to provide protection for performers’ feet. 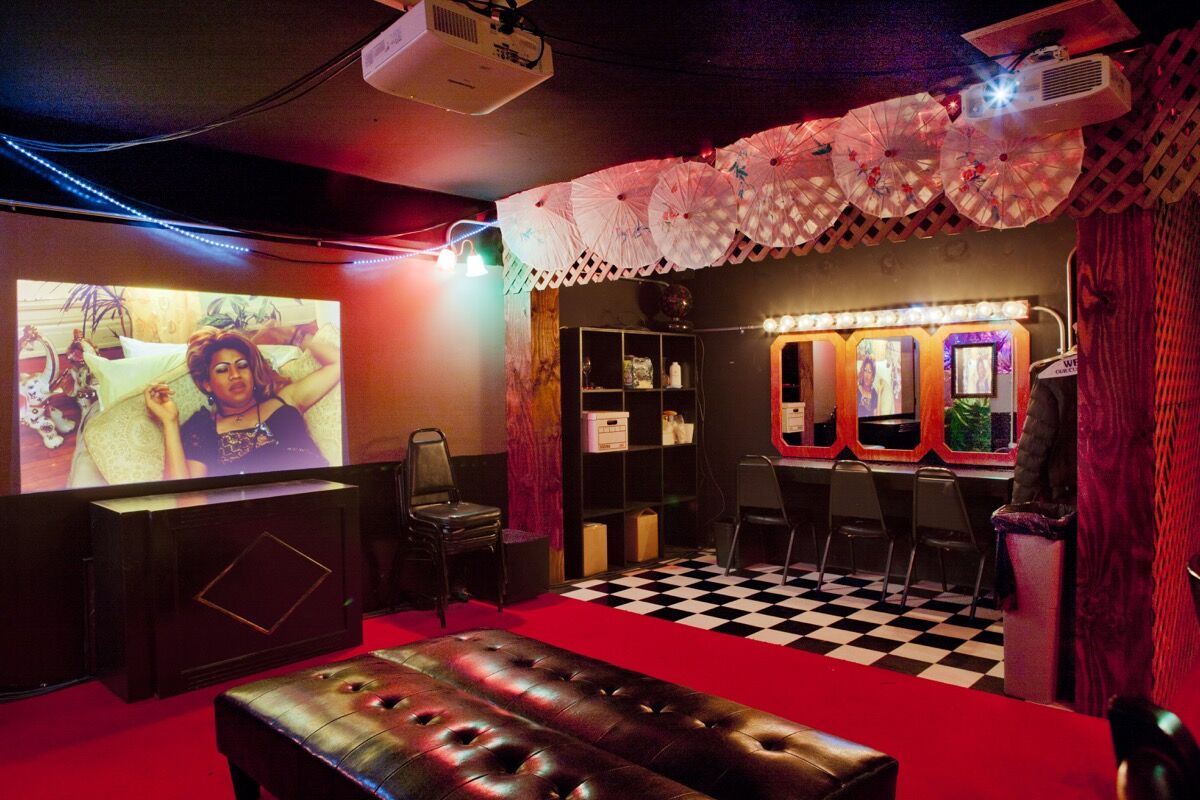 Installation view of Wu Tsang, Green Room, 2012, at the 2012 Whitney Biennial, curated by Jay Sanders and Elisabeth Sussman. Photography by Bill Orcutt, courtesy of the Whitney Museum of American Art.

“In a sociological, structural way, the Whitney Biennial is a chance to rewire how the museum works, how you build your walls, how you ask an audience to engage with it, which has really broadened my thinking,” says Sanders, who was hired as the museum’s first full-fledged curator of performance after the biennial.
Indeed he notes the influence of the 2012 biennial on the concept for last year’s exhibition “Open Plan,” which used the new building’s fifth floor as a single unobstructed space for five consecutive artists’ projects that he co-curated with four colleagues. (Next month, Sanders is leaving the Whitney to take the helm at Artists Space as executive director and chief curator.)
Shamim M. Momin was just 28 and branch director of the Whitney’s former Altria space when she was asked to co-curate the 2004 biennial with curators Chrissie Iles and Debra Singer. Momin returned to the role in 2008 when she was teamed with Henriette Huldisch.
“Nothing else replicates how you get to go everywhere and interact with so many artists in such a concentrated amount of time,” says Momin, who in 2009 founded LAND (Los Angeles Nomadic Division), which curates site-specific public art projects around L.A. “I’ve tried to keep that up as much as I can. Even with my multiple hats at LAND, I feel committed to really spending the time with artists in their studios and being in front of the work.”
Momin’s experience with the 2008 biennial partly inspired her conception of LAND’s mission. Many of the artists that she and Huldisch were most interested in were working across multiple platforms besides object-making, from publishing projects to culinary gatherings. They chose to expand the biennial into the eccentric spaces of the Park Avenue Armory that year to highlight those “extended practices,” as they called it. “We felt we weren’t showing the work properly by ‘just’ showing it at the Whitney galleries,” says Momin.
Her biennial credentials certainly helped her in building support and momentum behind LAND. “It’s something that’s very easy to cite,” says Momin. “We work with many different partners in the public realm, and I’m sure that [the biennial] had some impact on people being able to understand that we know what we’re doing and why we wanted to use their space in this weird way with artists they don’t know.”
In 2014, the Whitney Biennial was led by three curators from outside the museum—Stuart Comer from MoMA, Anthony Elms from the ICA Philadelphia, and Michelle Grabner, an artist and professor at the School of the Art Institute of Chicago.
“I was tapped as an artist from the Midwest who was a teacher,” says Grabner, “which had a narrative to it and was something different than past curators who had a hand in the Whitney Biennial.” (She notes the rise in artist-curators of prominent exhibitions, such as Christian Jankowski organizing last year’s Manifesta 11.) Each of the three curators for that 2014 biennial worked independently on their given floor. “People understood I like objects,” says Grabner, who championed a lot of contemporary abstract painting. 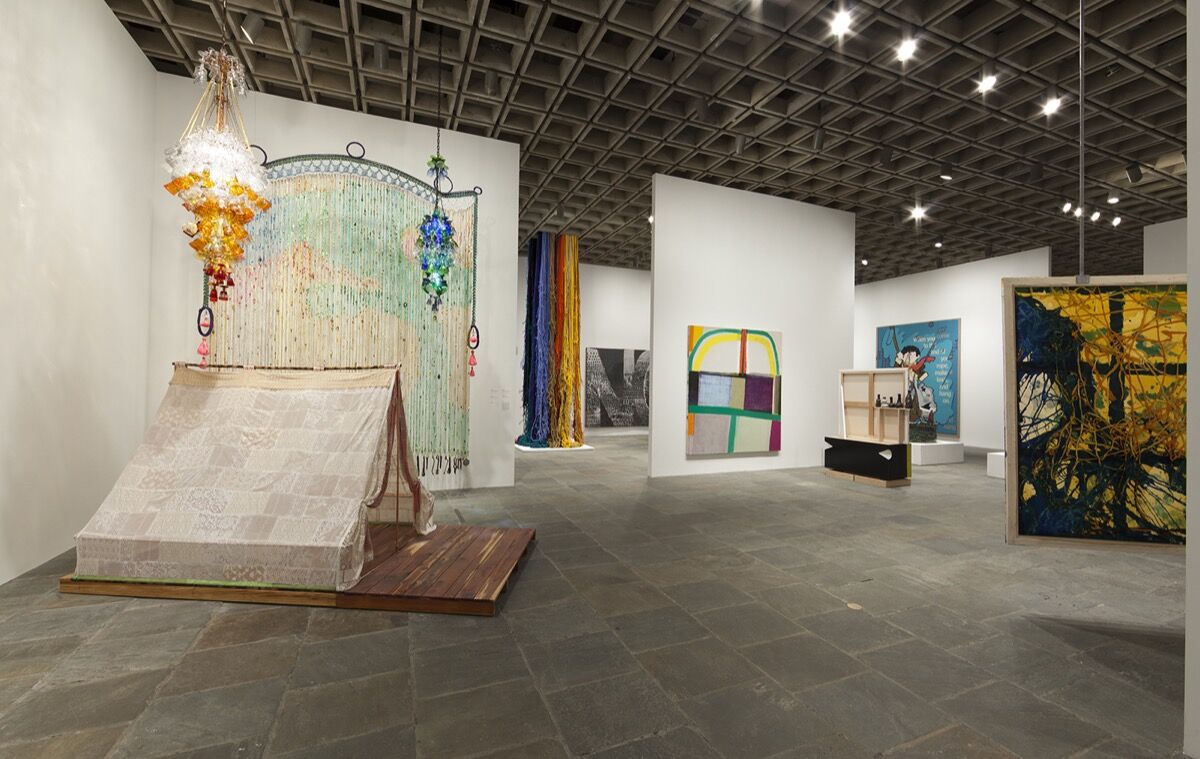 Installation view of the 2014 Whitney Biennial, on the floor curated by Michelle Grabner. Courtesy of the Whitney Museum of American Art.

Advertisement
As an artist who had been on the receiving end of studio visits from would-be curators in the past and felt some irritation with the mystery enshrouding the process, Grabner took pains to be as transparent as possible. “The stakes are so high for an artist that being rejected is a hard thing,” says Grabner, who in the exhibition catalogue included graphics showing how many studios she visited, the division between men and women, and their average age, among other stats.
Grabner, who was the curator of the 2016 Portland Biennial and is currently co-organizing the new Cleveland Triennial, titled “FRONT,” is now rethinking that approach. “I’m less sure that everything has to be an open book,” she says. “By keeping the selection process a little more opaque, it allows us as artists or viewers to insert our own understanding as to why these artists are included. That’s something I’m considering now.”
Grabner’s stint as a Whitney Biennial curator undoubtedly helped her to secure subsequent curatorial gigs. “I was able to work with a big institution, get my catalogue essay in on time, work with registrars,” she says. For Carrion-Murayari, who was hired by the New Museum shortly after the 2010 biennial, his Whitney credit likely helped to make him an attractive choice to co-organize the 2018 New Museum Triennial with Alex Gartenfeld from the Institute of Contemporary Art in Miami.
If only the two endeavors felt more related, Carrion-Murayari muses. “Having the whole world as your purview is a very different experience than America,” he says of the broad parameters of his New Museum Triennial mandate.
“Cities in America are different, but it’s nothing compared to things in other countries where the art world just doesn’t function in the same way. It’s really night and day.”
—Hilarie Sheets
Related Stories

What Participation in the Whitney Biennial Means to These Emerging Artists 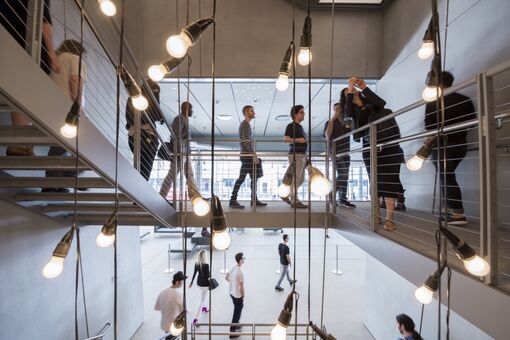 What Participation in the Whitney Biennial Means to These Emerging Artists
Isaac Kaplan
Mar 9, 2017