Why Artists and Activists Are Protesting the Brooklyn Museum 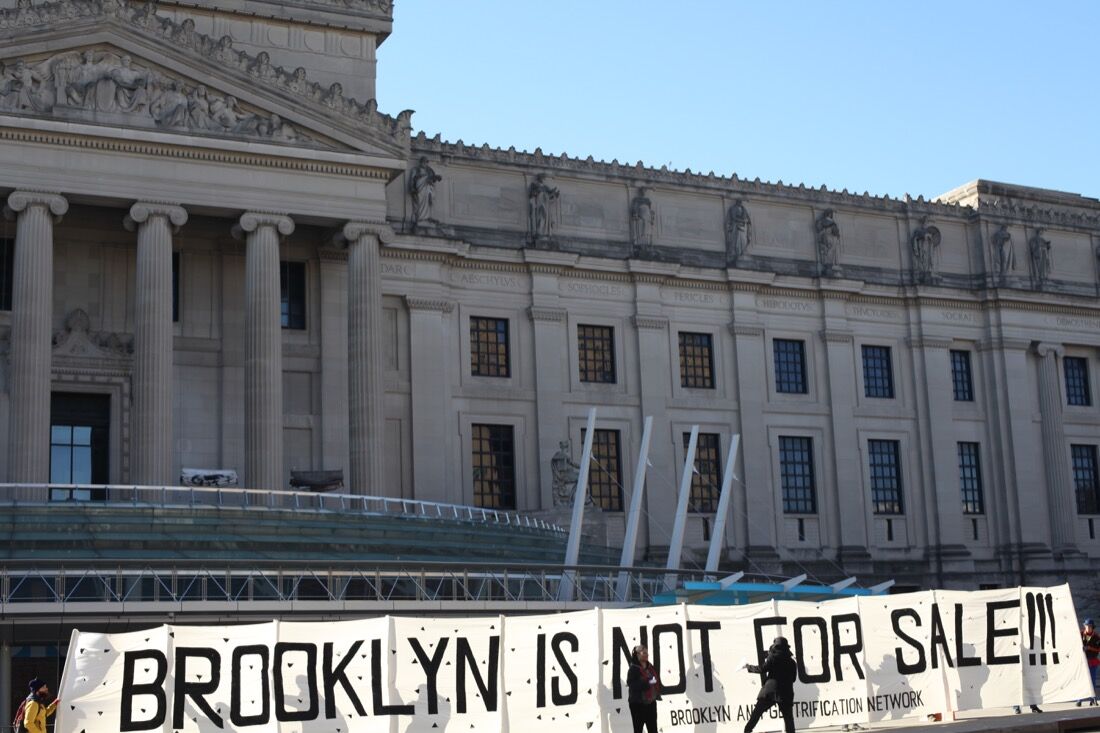 During protests organized by the Brooklyn Anti-Gentrification Network (BAN), demonstrators unfurled a 65-foot banner in front of the Brooklyn Museum. Photo by Isaac Kaplan.

Over 100 people gathered outside the Brooklyn Museum yesterday in two waves of demonstrations against the “6th Annual Real Estate Summit” being held inside the institution. Dissenting voices erupted online after word broke that the museum had rented space to the conference of some 600 developers who had gathered to “learn how to create value” in Brooklyn (after coughing up $500 per ticket). Many argue that such language is code for hiking rents and that the museum was effectively providing space for developers to plot the further gentrification, and ensuing displacement, of marginalized communities.
At the first demonstration, protestors from a number of activist groups, some congregating as early as 7:30 AM, braved the chilly morning to relay a clear, angry, and comprehensive anti-gentrification message, one that touched on everything from affordable housing (“Affordable for who?” was a frequent refrain) to community gardens. The tensions and shifting demographics of Prospect Heights, where the museum is located, were evident: amid chants of “Fight Fight Fight—housing is a human right,” moms in exercise clothes pushed strollers by while summit participants hurried into the museum. 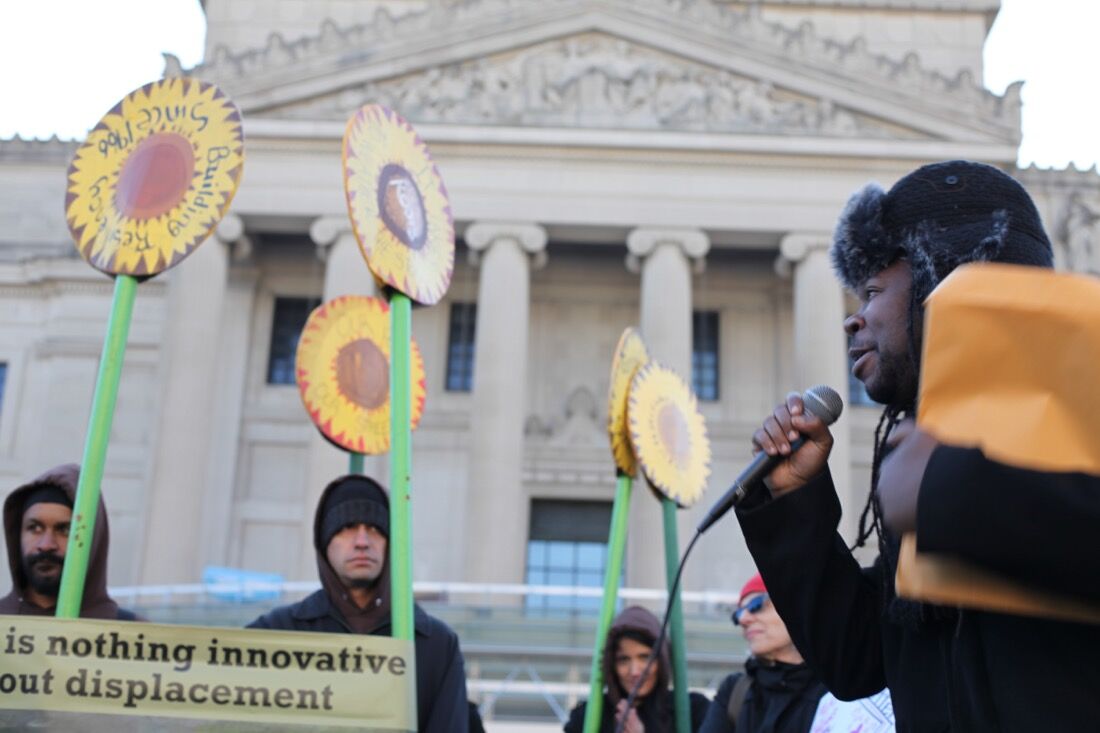 Imani Henry speaking at the protests at the Brooklyn Museum on Tuesday, Nov. 17th. Photo by Isaac Kaplan.

Ultimately, demonstrators wanted those congregated inside, including Brooklyn Borough president and featured summit speaker Eric L. Adams, to hear their simple directive. “The message to the developers is ‘go away,’” artist Sarah Quinter told Artsy in the lead up to the protest. “The message to the museum is ‘don’t ever host these developers again.’” Indeed, many feel the summit is antithetical to the museum’s role to safeguard, generate, and reflect the community’s cultural values.
Imani Henry, a member of a group affiliated with the Brooklyn Anti-Gentrification Network (BAN), which organized the first demonstration, voiced frustration over how the summit’s location in a museum had overshadowed broader issues affecting people of color. “We are living and breathing as artists every day of our lives, whether people pay attention or not,” Henry said, noting that black street performers and graffiti artists have had their art criminalized by broken-windows policing. “We’re fighting for our lives,” he added, a statement borne out by the residents and activists who spoke during a noon press conference, giving long, often gut-wrenching testimonials about their experiences with displacement, poverty, and homelessness. 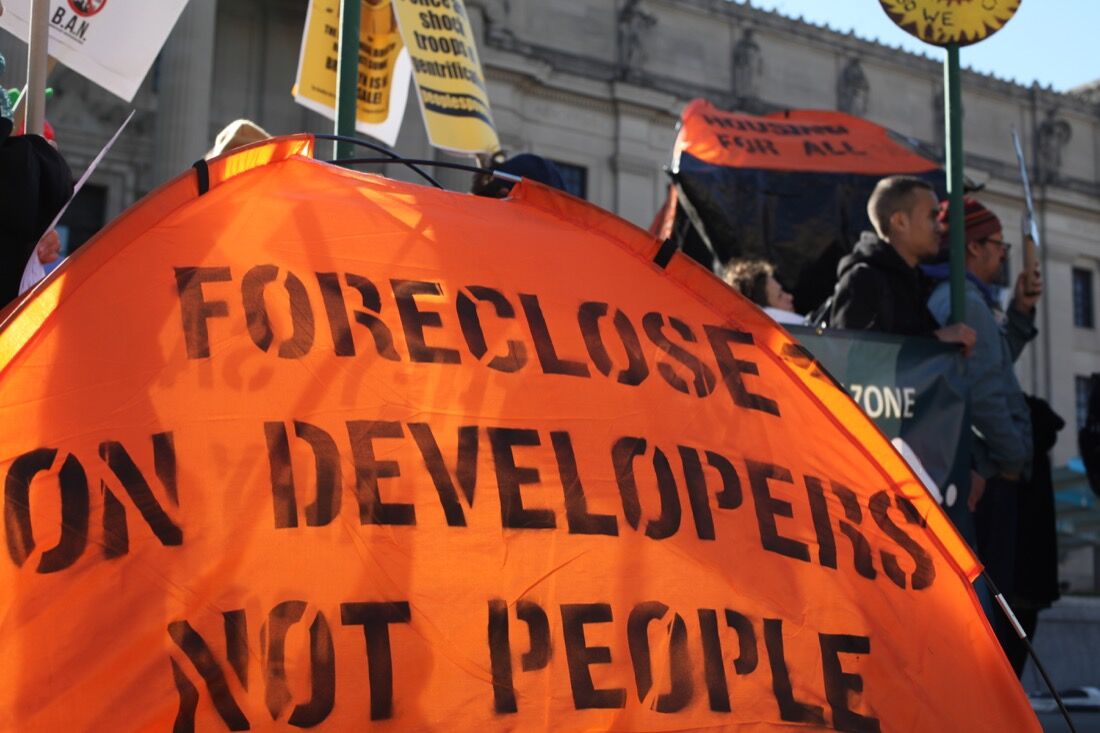 A tent created by Not An Alternative on view during BAN’s protest in front of the Brooklyn Museum. Photo by Isaac Kaplan.

Advertisement
The second protest, organized by the Artist Studio Affordability Project (ASAP), occurred late in the afternoon. With the sun setting, the protest, titled “Double Crossing Brooklyn” (a riff on the museum’s 2014 “Crossing Brooklyn: Art from Bushwick, Bed-Stuy and Beyond” survey exhibition), was a manifestation of what ASAP member Jenny Dubnau argues is the responsibility of artists to engage politically as the city’s affordability crisis continues.
Artists, who have seen studio prices soar, have long been associated with gentrification, and she told me there is a need to “break the link between culture and capital,” one made palpably obvious by the summit’s presence in the Brooklyn Museum. “Financially, perhaps we’re uncovering something really uncomfortable,” she said. Indeed the summit and protests come on the heels of the roundly lambasted “Bronx-is-Burning” Halloween party, organized by Bronx real estate developers and curated by artist
Lucien Smith
(Brooklyn Museum director Anne Pasternak was reportedly a co-host), a glitzy affair aimed at “rebranding” the South Bronx as the “Piano District” in an attempt to entice developers. 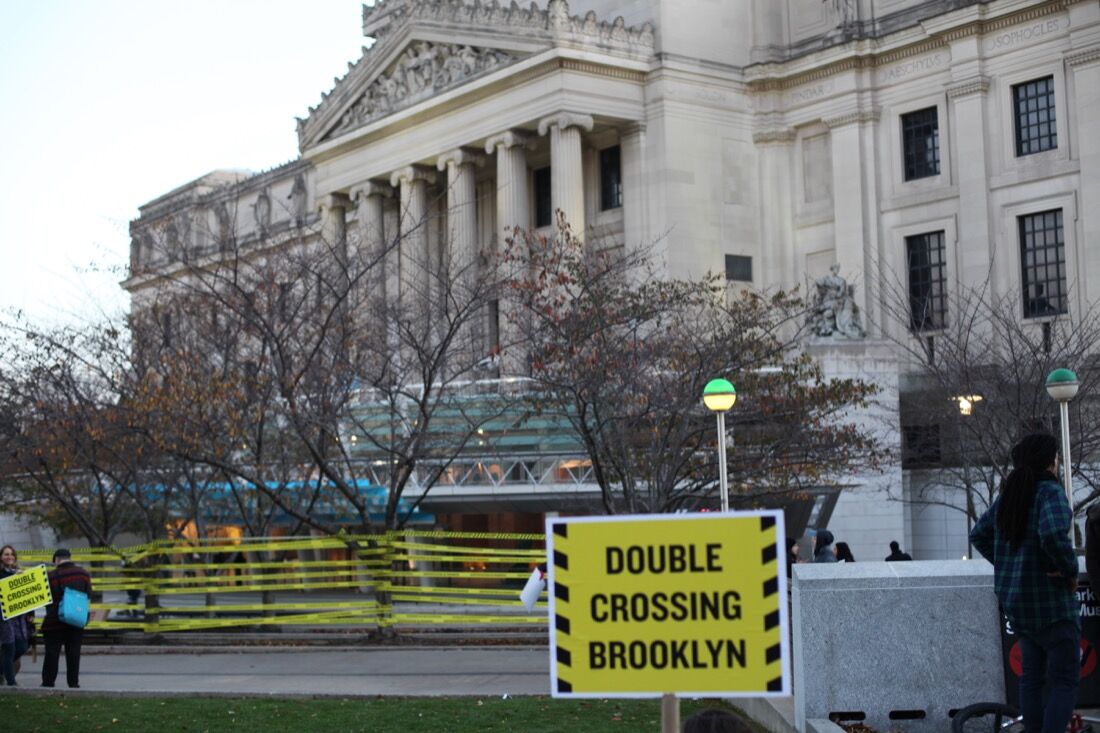 The “Double Crossing Brooklyn” protest at the Brooklyn Museum. Photo by Isaac Kaplan.

Even before the picket line formed, online criticism from ASAP, Quinter, and a number of activists and writers (including Ben Davis and Paddy Johnson of blog Art F City), prompted Pasternak to acknowledge the protester’s grievances, noting “we are not expressing opinions regarding the matters discussed in the conference.” In a follow-up message, she added that the museum would “take a close look at our policies for hosting third-party events.” According to Gothamist, Pasternak also claimed that protesters declined an invitation to meet with her to discuss their concerns. (In a statement provided to Artsy, the museum said: “As a place of learning and engagement, the Brooklyn Museum is a center for conversations for our many diverse communities—we cherish this role.”)
For some, the location of the developers’ summit came as a shock given the museum’s strong reputation for fostering community dialogue and exhibiting black and women artists, such as
Zanele Muholi
,
Kara Walker
, and
Wangechi Mutu
. Next month the museum will host “Agitprop!,” a show dedicated to art that “create[s] political and social change.” But given the dire nature of the affordability crisis, Jason Jones (member of the artist/activist collective Not An Alternative) thinks that mounting such exhibitions isn’t enough, arguing institutions like the Brooklyn Museum are “associated with radical gestures but not political import.” 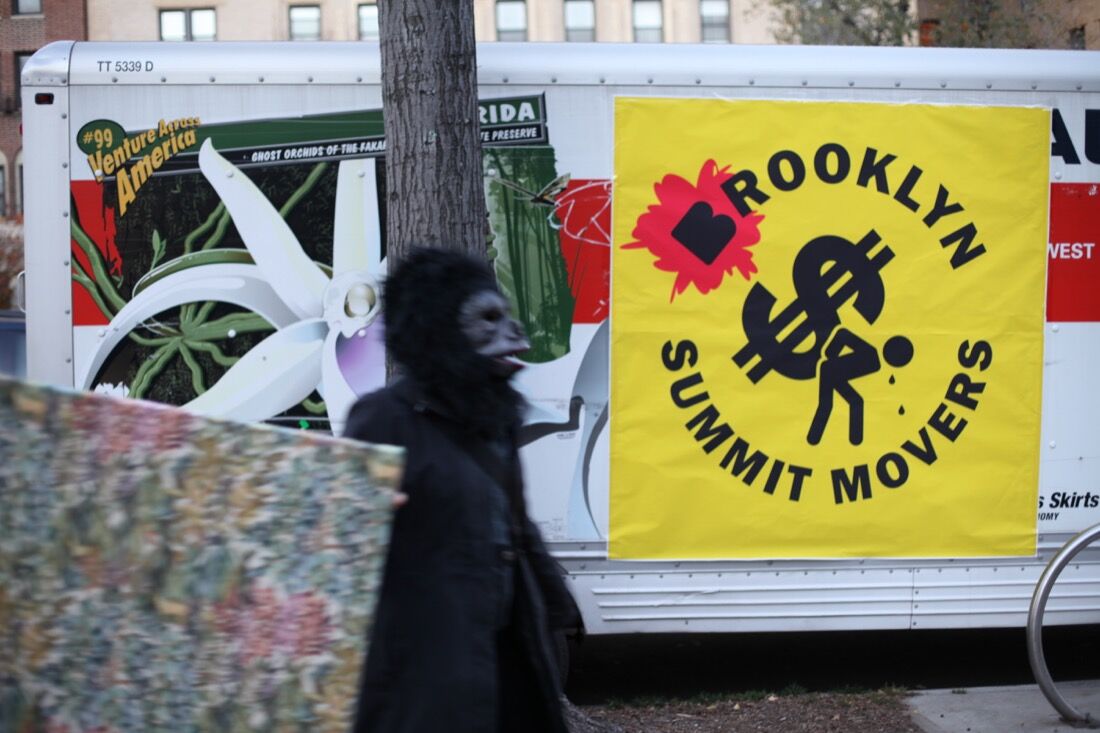 “Frida Kahlo” of the Guerrila Girls unloading furniture from a U-Haul as a part of the protests.

In collaboration with several nonprofits, including Picture the Homeless, Not An Alternative created a number of orange tents emblazoned with slogans like “Foreclose on Developers Not People,” which dotted the protest line throughout the day. Though curators planned to include the tents inside the museum as part of “Agitprop!,” it is hard to imagine that the institution’s white walls will suit the tents better than yesterday’s charged protest.
During the demonstrations, “Frida Kahlo” of the Guerilla Girls, slated to be included in the same exhibition, helped unload furniture from a U-Haul, dumping it in front of the museum in an act meant to bring home the rapid displacement affecting New Yorkers. Yet, amid the diverse rallying cries, colorful posters, and powerful testimonials, it was artist Nichole van Beek (herself forced to leave the neighborhood due to rising rents) who most eloquently summarized the underlying feeling of the protesting artists: “This conference was the worst thing they could have at this museum.”
Update 11/19: BAN has issued a statement denying that they refused to meet, stating they “were never contacted directly by Anne Pasternak or any other Brooklyn Museum employee.”
—Isaac Kaplan
Related Stories