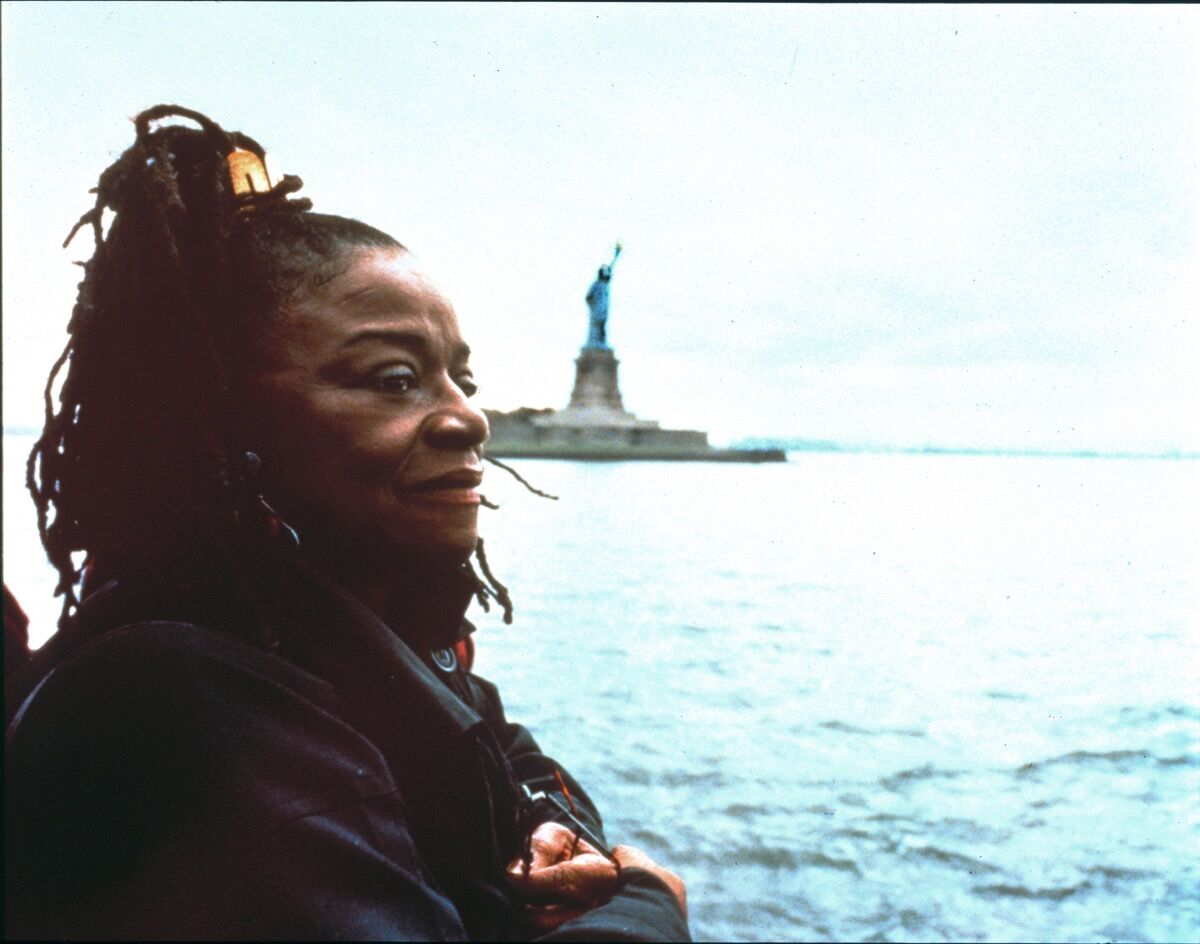 In 1967, a year of widespread race riots in America,
Faith Ringgold
painted a 12-foot-long canvas called American People Series #20: Die. The work shows a tumult of figures, both black and white, wielding weapons and spattered with blood. It was a watershed year for Ringgold, who, after struggling for a decade against the marginalization she faced as a black female artist, unveiled the monumental piece in her first solo exhibition at New York’s Spectrum Gallery. Earlier this year, several months after Ringgold turned 85, the painting was purchased by the Museum of Modern Art, cementing her legacy as a pioneering artist and activist whose work remains searingly relevant.

Where did she come from?

Ringgold was born in Harlem in 1930. Her family included educators and creatives, and she grew up surrounded by the
Harlem Renaissance
. The street where she was raised was also home to influential activists, writers, and artists of the era—Thurgood Marshall, W.E.B. Dubois, and Aaron Douglas, to name a few. “It’s nice to come up in a period where great changes are being made,” she once said. “And that was my period: the ’30s to the ’60s, when radical changes were being made.”

Ringgold received her art education at City College, down the street from her childhood home. “I got a fabulous education in art—wonderful teachers who taught me everything except anything about African art or African American art. But I traveled and took care of that part myself,” she’s said. After graduating, she began her career painting landscapes and still-lifes in the style of modern European masters. But her practice quickly pivoted to focus on her own experience and the political and social tensions that surrounded her, namely the struggle for equality among women and the black community.

Throughout her career, Ringgold’s work has been driven by the challenges and fulfillments of her life and the lives of those around her. “First of all, you should never make something, as an artist or even as a writer, that is outside of your experience,” she once said. “People will use what is available to them. I am black and I am a woman. There it is.”
In 1963, as the fight for racial justice animated the Civil Rights movement, Ringgold began her seminal “American People Series.” It was the artist’s first body of work to manifest her mature style—one that fused the forms and techniques of folk art with content inspired by the most vocal social critics of her time, such as the writers James Baldwin and Amiri Baraka. In an early painting from the series, The American People Series #1: Between Friends (1963), two women, one black and one white, stand close but seem to stare through each other. A red divider cuts through the center of the composition, bifurcating the two women and emphasizing their distinct experiences and, perhaps, their inability to understand one another. 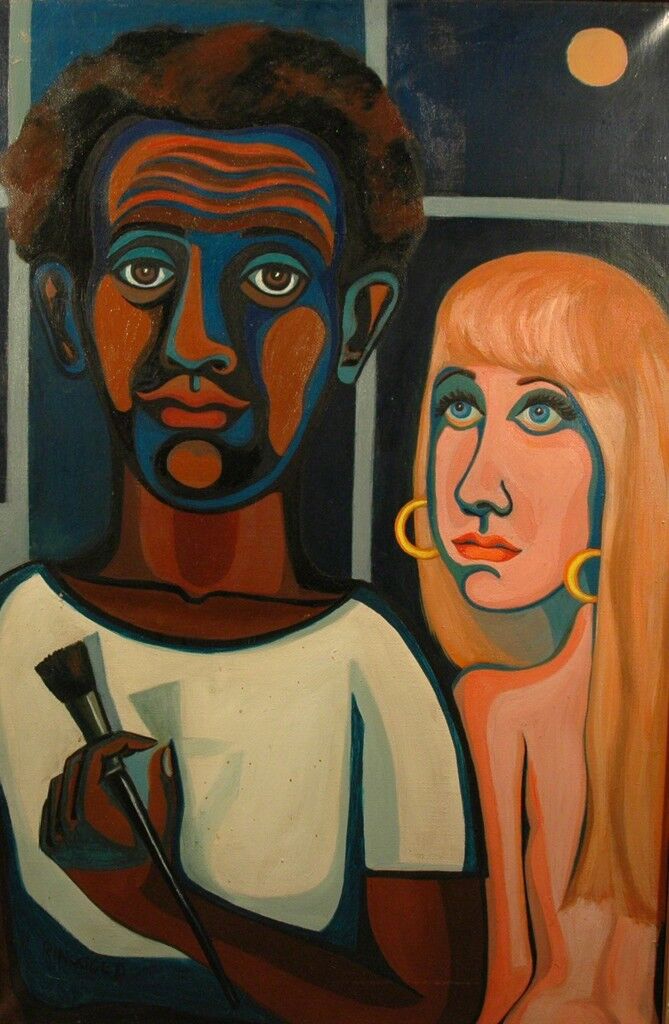 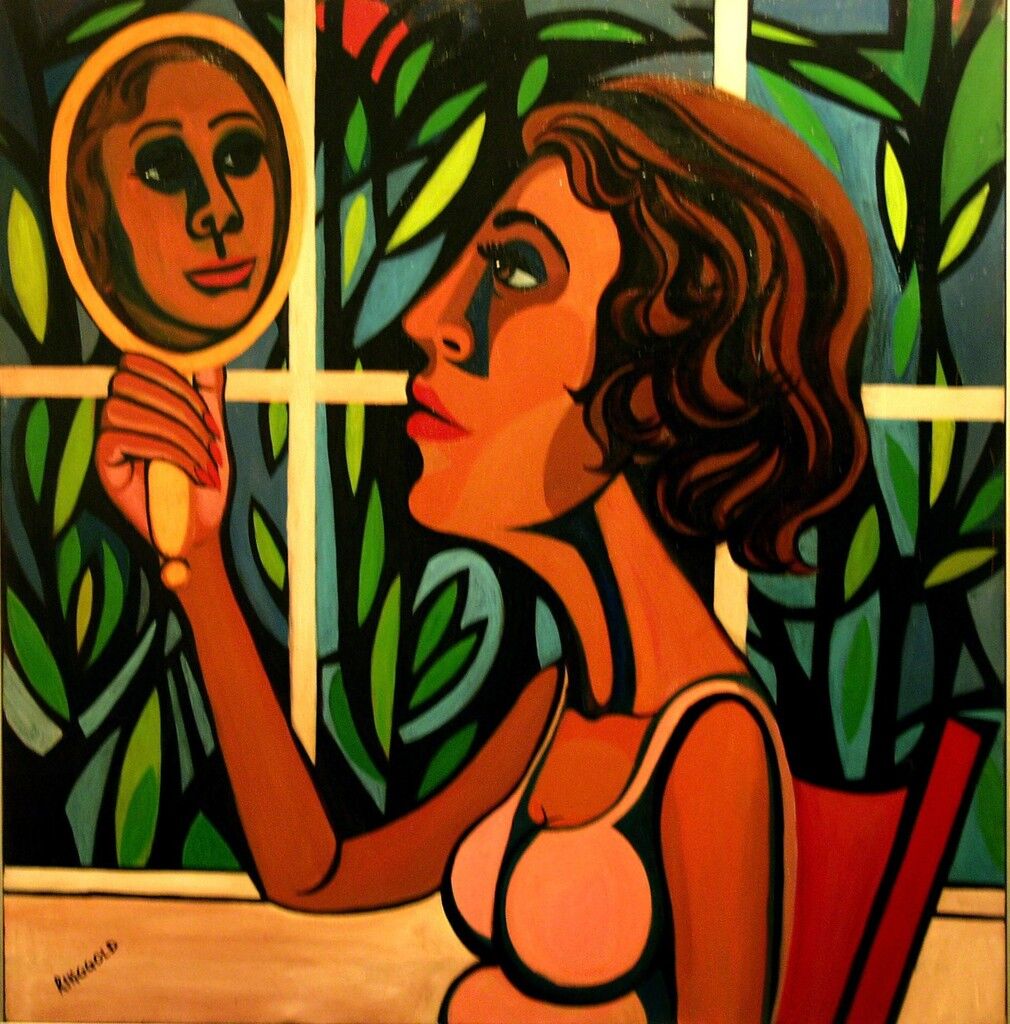 Faith Ringgold
American People Series #16: Woman Looking in a Mirror, 1966
ACA Galleries
Advertisement
The ’60s also gave birth to Ringgold’s role as an activist. In 1968, she organized a demonstration protesting the omission of black artists in a Whitney Museum show highlighting American sculptors of the ’30s. Two years later, she was on the front lines of another demonstration at the Whitney—this time protesting the woeful dearth of female artists across the museum’s exhibition program. The demonstrators brandished police whistles, feminine products, and eggs: “I boiled mine, painted them black, and wrote 50 percent on them [to indicate the percentage of women who should be included in shows],” Ringgold said. “It felt like we were doing something and were a part of the movement in America to equalize things.”
Inspired by the history of African and African-American art, Ringgold introduced fabric and three-dimensional forms into her practice in the ’70s. Her experiments resulted in soft sculptures that drew from tribal masks and handmade dolls; in “The Harlem Series” (1975), these took the form of Civil Rights heroes and black cultural icons, like pastor Adam Clayton Powell Jr., activist Martin Luther King Jr., and NBA star Wilt Chamberlain. Not long after, Ringgold began making her “Story Quilts”—intricate narrative paintings bordered with fabric that would put her name on the map (she adapted one piece, Tar Beach, 1988, into a popular children’s book), but weren’t accepted into the art historical canon until recently. The Guggenheim purchased Tar Beach in 1988 but has yet to place it on public view.

Why will she go down in history?

Ringgold passionately combines a deep commitment to social activism with a style that draws from folk art and modernist painting. Across her body of work, paintings and sculptures lay bare the discrimination that plagues our world and double as rallying cries for urgent change. “You can’t sit around waiting for somebody else to say who you are. You need to write it and paint it and do it,” she once said. “That’s the power of being an artist.” And while the subjects and scenes that fill Ringgold’s compositions are inspired by the American experience, the themes are universal: inequality and the struggle for its eradication. 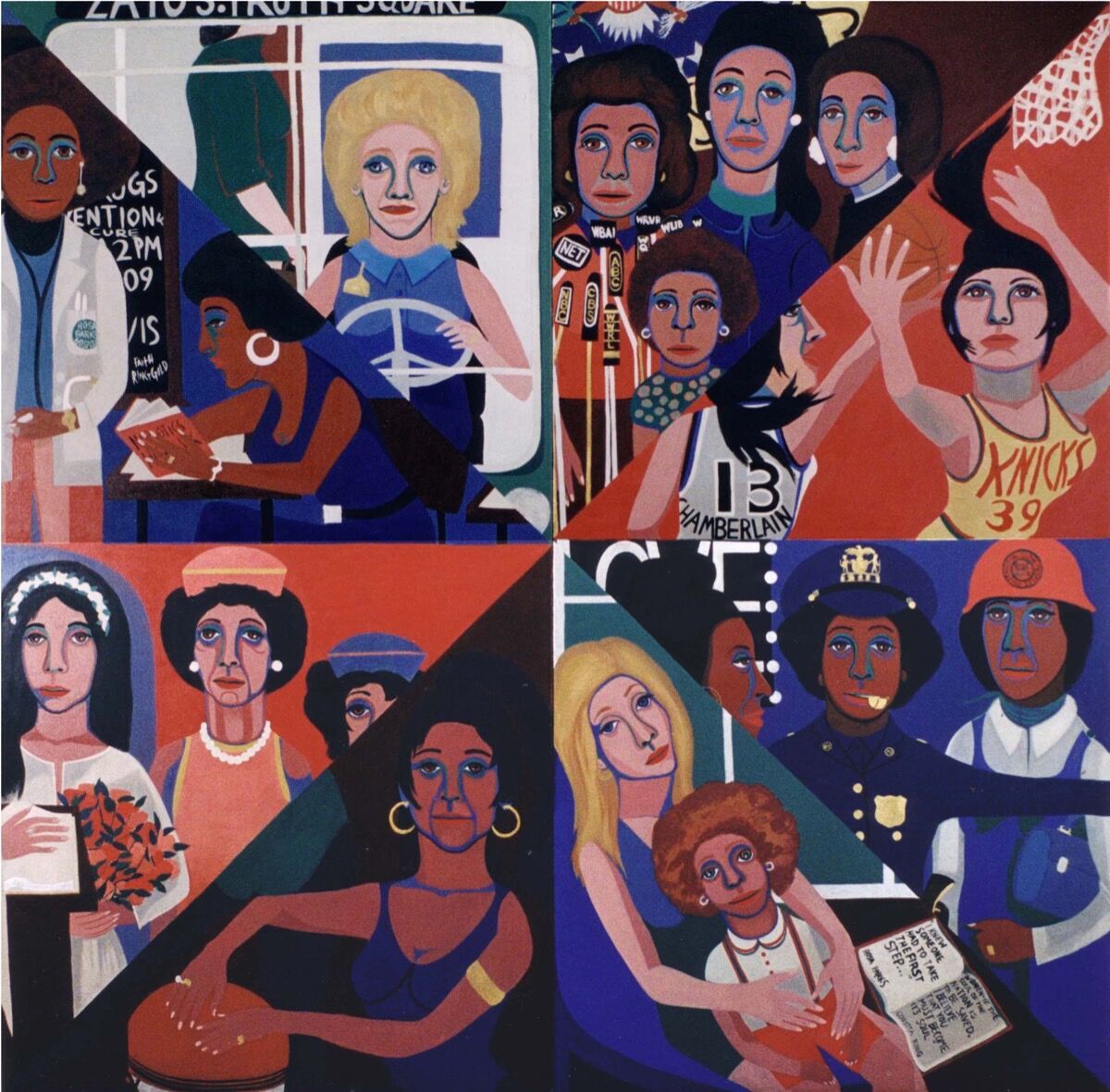 In 1971, Ringgold took up a residency of her own design at Rikers Island. For several months, she interviewed women incarcerated in the Women’s House of Detention. She asked inmates what they hoped to see in the site-specific painting that she would create for the space. “Many of them voiced the opinion that they wanted to be able to see women being things in the world other than some of the things they had gotten arrested for,” she recalled. A year later, For the Women’s House (1971) was installed on the walls of the prison: It showed women of all races working in an expansive range of professions, many of them traditionally associated with men: doctors, police officers, basketball players. In the corner of the composition, an open book reads: “I knew someone had to take the first step. –Rosa Parks.” It’s a fitting tagline for Ringgold’s own influential and groundbreaking practice.
—Alexxa Gotthardt
Related Stories