There is a moment from
Mark Rothko
’s life that still manages to confound, even half a century later. It’s been the focus of two documentaries, one award-winning play, and served as fodder for countless biography chapters. It’s the story of the Seagram murals—the first commission the struggling painter ever received, and also the first commission he turned down.
The story begins in 1954, when the Bronfman family, owners of the Seagram distilleries, announced their intention to build a new corporate headquarters on Park Avenue between 52nd and 53rd Streets. They hired architect
Philip Johnson
to help oversee the project, and he invited German architect
Ludwig Mies van der Rohe
to collaborate with him on the design of the building itself. The ground-floor Four Seasons restaurant, outfitted with plants, pools, expensive stone, and a world-class art collection, would serve as a reflection of the power and opulence of 1950s Manhattan (and it did, until this year).
Rothko himself didn’t come from America. He was born in Dvinsk, Russia (now Daugavpils, Latvia), where he spent the first 10 years of his life; his family moved to Portland, Oregon, in 1913. Rothko grew up poor and, despite being accepted to Yale (which he reviled, and eventually dropped out and moved to New York), his finances were tight well into his middle age. In the 1950s, however, his paintings were finally beginning to sell. He caught the attention of Alfred H. Barr, the director of the Museum of Modern Art, who recommended that Rothko’s work hang on the wall of the Four Seasons. So the painter was offered a $35,000 commission in 1958 to create 500 to 600 square feet of mural-scale canvases for the smaller of the restaurant’s two dining rooms.
Many have wondered why, exactly, he took the commission. Some believe Rothko was mistaken about where the paintings were to be hung—instead of the restaurant, he thought his canvases would adorn the wall of a boardroom also visible from the employees’ mess hall. The project organizers, however, claim he knew exactly where his works would end up. Others, including the Guardian’s Jonathan Jones, believe he wanted to create an environment that terrified and oppressed the high-flying crowd who would dine there. Certainly, Rothko’s conversation in 1959 with John Fischer, the publisher of Harper’s Magazine, reflects that feeling. “I hope to ruin the appetite of every son of a bitch who ever eats in that room,” the artist said. “If the restaurant would refuse to put up my murals, that would be the ultimate compliment. But they won’t. People can stand anything these days.” 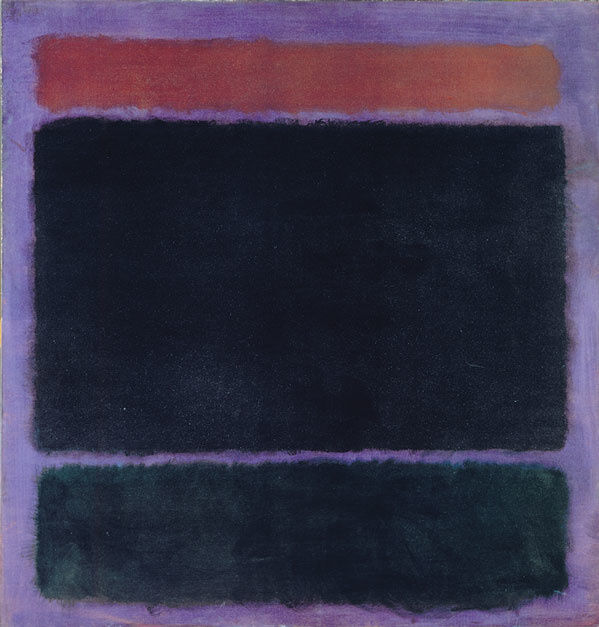 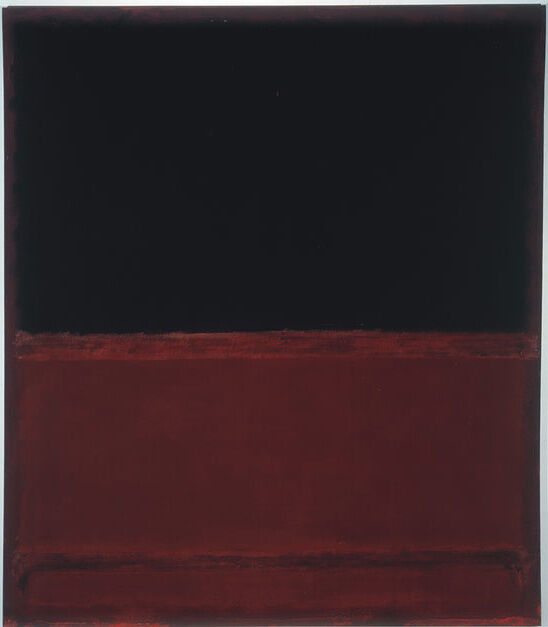 The numerous Seagram murals (he eventually made 30), are some of the first paintings in which he experimented with darker shades. This so-called “dark palette” is the focus of a current, unprecedented show at Pace Gallery, featuring works drenched in deep hues of black, blue, purple, and red, spanning 1955 through the 1960s. It’s a period of his artmaking that is often overlooked, according to Pace Gallery chairman and founder Arne Glimcher. This is the gallery’s 12th Rothko show, and the first to explore his dark palette in great depth.
“Each show has been a kind of peeling of the onion, revealing other layers of the artist’s work,” Glimcher said. “It’s so easy to just think of Rothko as this kind of museum postcard image of a red picture, or of a red-and-yellow picture. But there’s this other side of Rothko, deep and voluptuous colors that reveal themselves very slowly.”
Glimcher said there’s a misperception that these darker-hued works are “end-of-life” paintings that preceded Rothko’s suicide in 1970. But many of these works were created long before that date, as is the case with the Seagram murals. Additionally, Glimcher notes, for Rothko, bright colors could be as menacing as rust or burgundy.
He recalls a moment at Rothko’s studio when he complimented a painting done in shades of burgundy, plum, and black. The painter responded that he’d offered the work to someone just that day and she’d refused, saying: “Mr. Rothko I’d like a happy painting. A red painting, an orange painting, a yellow painting. A happy painting.” Rothko’s retort? “Red, orange, yellow—isn’t that the color of an inferno?”
Rothko took a break from the Seagram murals in June 1959 and traveled to Europe with his family. Upon his return to the United States, he went to eat at the completed Four Seasons with his wife, Mell.
Jackson Pollock
’s Blue Poles (1952) hung on the wall as a stand-in for Rothko’s soon-to-be-completed commission. For a man who once proclaimed it was “criminal to spend more than $5 on a meal,” it comes as no surprise that he found the experience off-putting. What is shocking was the level of his distaste. That night, he called a friend and informed them that he would be returning every cent of the commission and reclaiming his paintings. “Anybody who will eat that kind of food for those kind of prices will never look at a painting of mine,” he seethed to a studio assistant. The canvases went into storage; years later, after a series of lengthy negotiations with the Tate, he donated a number of them to the museum. They still hang there today.
One of the Seagram canvases is currently on view at Pace. Glimcher notes that these dark paintings, unlike the lighter-hued ones, “yield slowly, so they demand more time. But as you approach one of these burgundy pictures, you begin to see all kinds of layers of color that he laid underneath, until he built up to that surface and harmony of color,” he continued. “They’re very complex paintings, and they are paintings that require a lot of time.” Perhaps, as Rothko may have believed, more than the average restaurant-goer could spare.
Abigail Cain
Related Stories