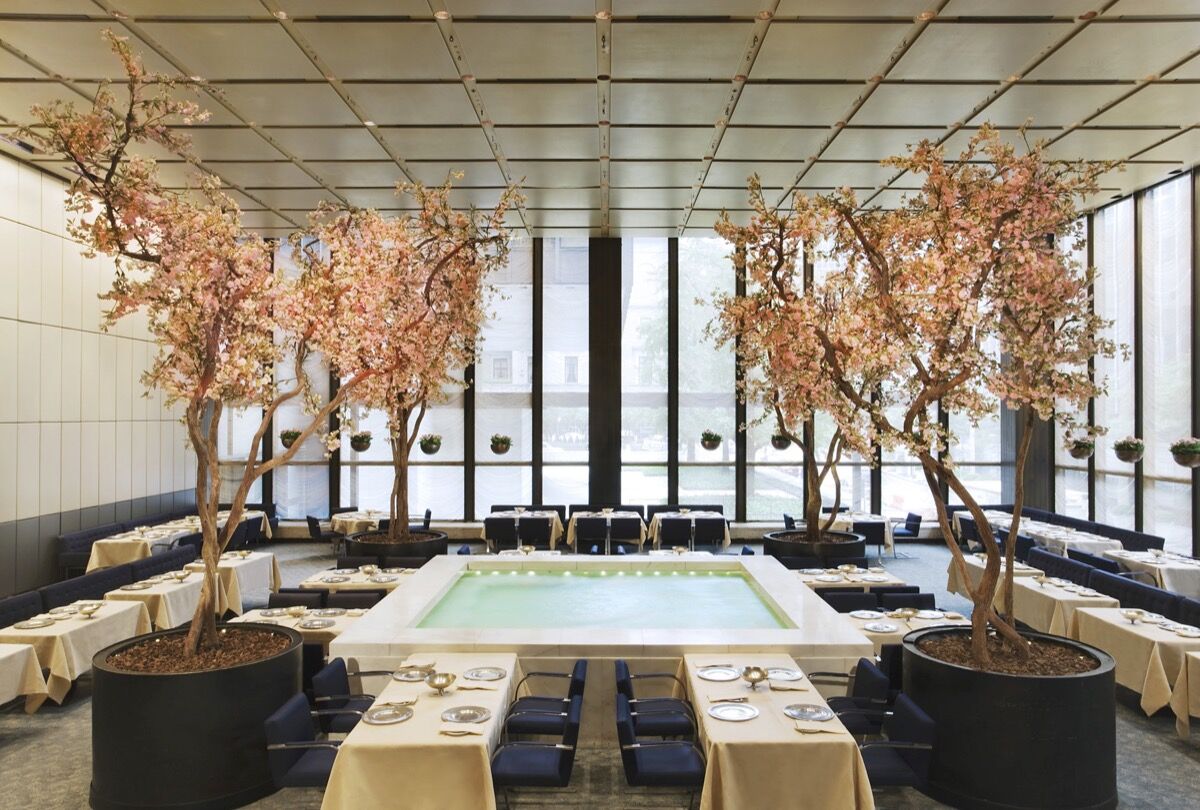 When potential bidders entered the Four Seasons restaurant on July 26th for an auction of its interior ephemera, they walked past a plaque near the front door that was ostensibly meant to prevent their presence. The inconspicuous oval mounted to a limestone foyer wall read “Designated Interior Landmark New York City.” Yet every movable feature of the restaurant’s High Modernist interior was sold that day, from furniture to flatware and plates, leaving many observers to wonder how a much-beloved interior that was supposed to be legally protected could be disassembled and dispensed with such expediency.
Writ large, historic preservation seeks to prevent the destruction of buildings and architectural elements of high aesthetic or historic value, and most major American cities have passed landmarking laws that govern the designation and protection of exceptional structures. Yet such laws typically focus on building exteriors, often to the detriment of interiors, for which legal protection mechanisms vary widely. In New York, an interior must be at least 30 years old before it can qualify for designation. In San Francisco, in contrast, either an individual element or the whole interior site can be designated. Many city governments don’t address interior designation at all in their historic preservation laws, in part because it’s decidedly easier to claim that the public significance of a building is bound up with the street-level presence of its facades.
The Landmarks Preservation Commission in New York City is historically unreceptive to petitions for interior designation, and at present, the status of various highly important interiors remains pending. The Four Seasons was but one of several prized spaces facing dismemberment. Below, we survey it and three other interiors, four of the city’s most architecturally significant sites—recently dismantled or potentially threatened—that could soon be unrecognizable. 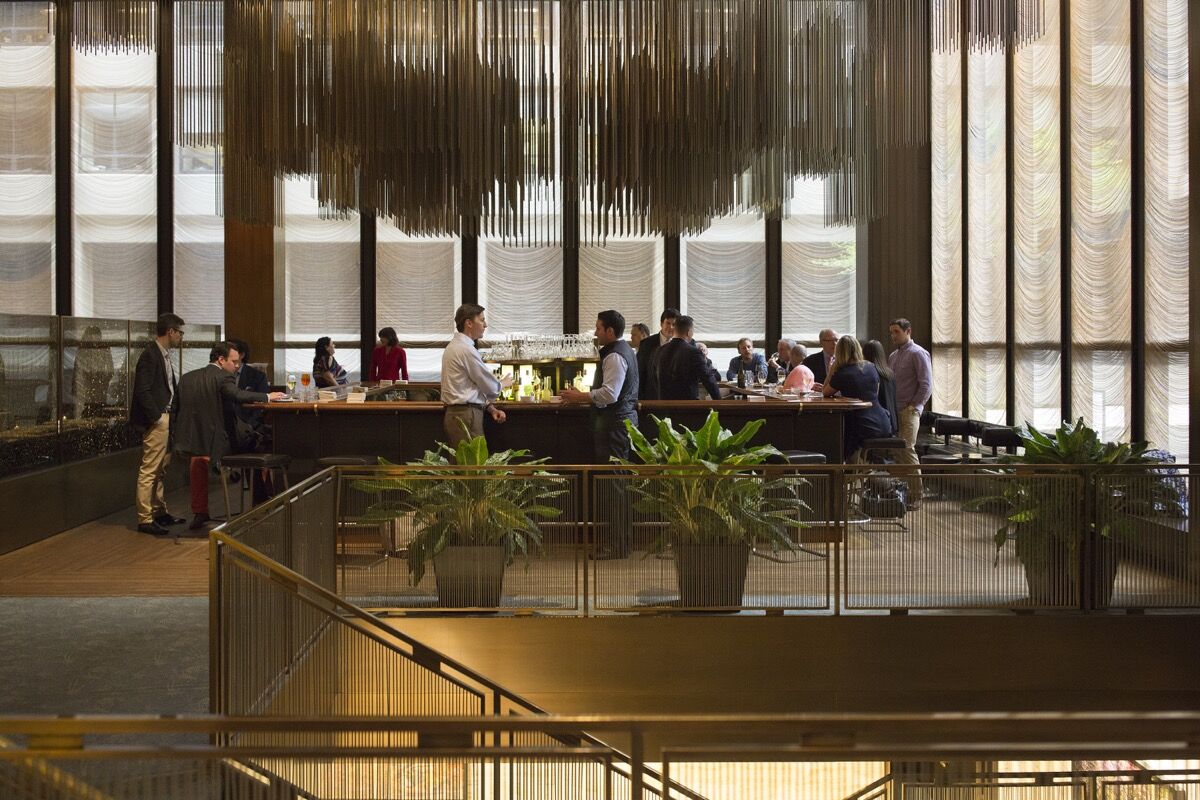 When the now-notorious eatery inside the Seagram Building opened in 1959, it was hailed as “the most expensive restaurant ever built.” No detail was spared in its appointments, some executed by the building’s architects,
Philip Johnson
and  Ludwig
Mies van der Rohe
, with William Pahlmann in charge of interior design. Johnson and Mies van der Rohe created custom bar stools for the restaurant, and Johnson designed the banquettes; they hired Garth and Ada Louise Huxtable to design nearly every element of the food service, from flatware to cooking equipment and rolling carts; and commissioned custom furniture from
Eero Saarinen
and
Knoll
. Four years after the New York City Landmarks Preservation Commission designated the Four Seasons an interior landmark in 1989, the building’s then-owner sued the city in hopes of repealing a designation that, the company argued, limited future use of the space.
The Seagram Building now belongs to developer Aby Rosen, whose disputes with the LPC over the interior of the Four Seasons have been reported since 2014, when he found a legal loophole to remove a Picasso tapestry from the restaurant. The following year, Rosen chose not to renew the restaurant’s lease. Four Seasons owners and managers Edgar Bronfman Jr., Julian Niccolini, and Alex von Bidder ceased operations in the Seagram Building on July 16th, intent to re-open in a new space a few blocks away. A new restaurant will open in the old space, one that is legally bound to maintain the walnut paneling on the Grill Room’s walls, the Pool Room’s namesake water feature, and the Richard Lippold sculpture installed above the front bar. But because interior landmark designation only governs permanent elements—that is, features bolted to the floors, ceilings, and walls—no legal recourse could ensure that the furniture, cutlery, and other ephemeral elements remained in the space for which they’d been designed. Every lot at the Four Seasons auction surpassed estimates—a bronze sign with the arboreal logo went for $96,000, not including New York State sales tax and a 20% buyer’s premium—a testament to the fact that it was not merely a landmark interior but a cultural institution in its own right. 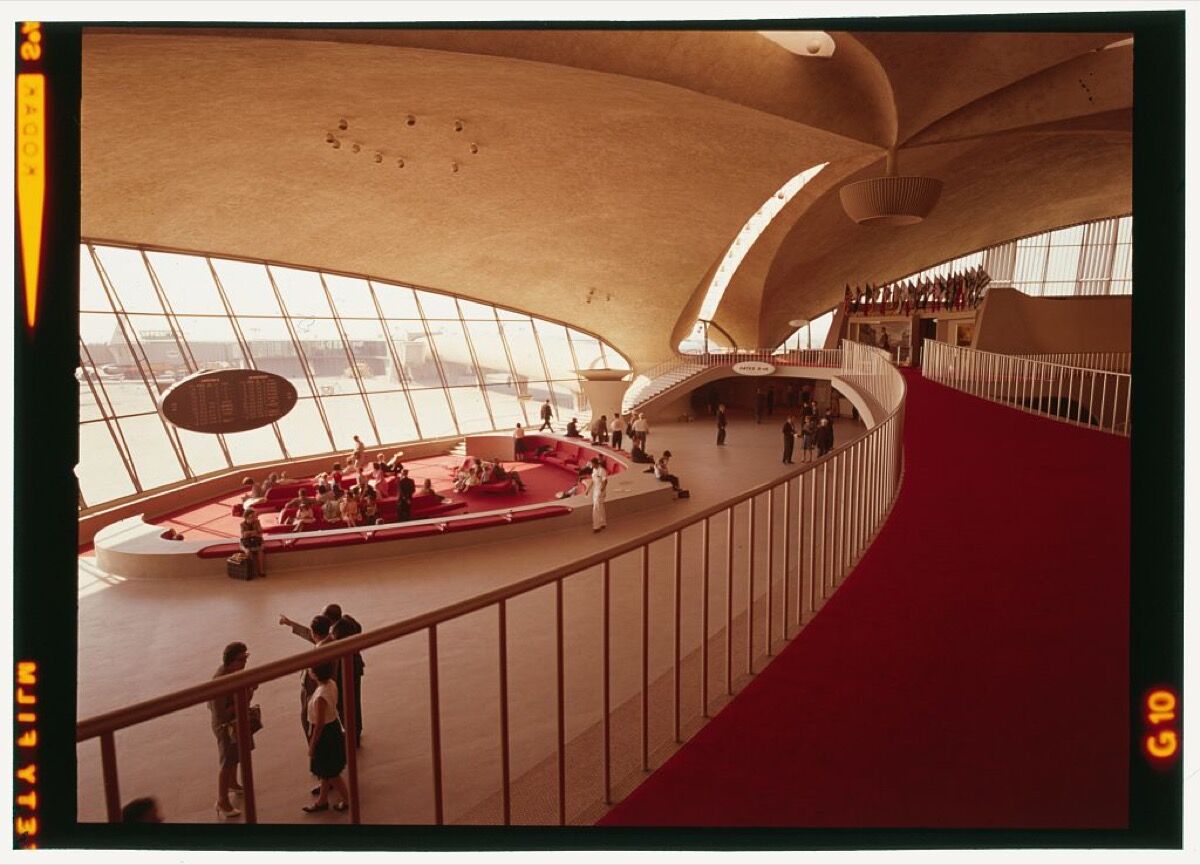 Advertisement
When it opened in 1962, the
Eero Saarinen
-designed headhouse to the Trans World Airlines (TWA) Terminal at Idlewild Airport (now John F. Kennedy Airport) represented boundless Jet-Age optimism. A 1994 interior and exterior landmark designation confirmed the significance of features like its curved interior stair and the plush red upholstery in its departures lounge. The building closed in 2001, by which point its namesake airline had gone out of business. Thereafter, the terminal briefly hosted a pop-up art show in 2004, and continued to lay dormant as JetBlue moved into a nearby terminal—and incorporated Saarinen’s building into its logo, without restoring or occupying the original.
After failed negotiations to convert Saarinen’s building into a Standard Hotel, real estate firm MCR Development announced in late 2015 that it planned, in partnership with JetBlue, to renovate the headhouse into a luxury hotel complex, with 505 offsite guestrooms to be located near the original building. Though the developer has not made public the full details of its renovation plans, the company insists that it intends to “celebrate and preserve Eero Saarinen’s masterpiece,” according to its CEO Tyler Morse. It remains to be seen if the remodel will match original materials and finishes, or simply evoke their effect with an update that feels like a stage set. 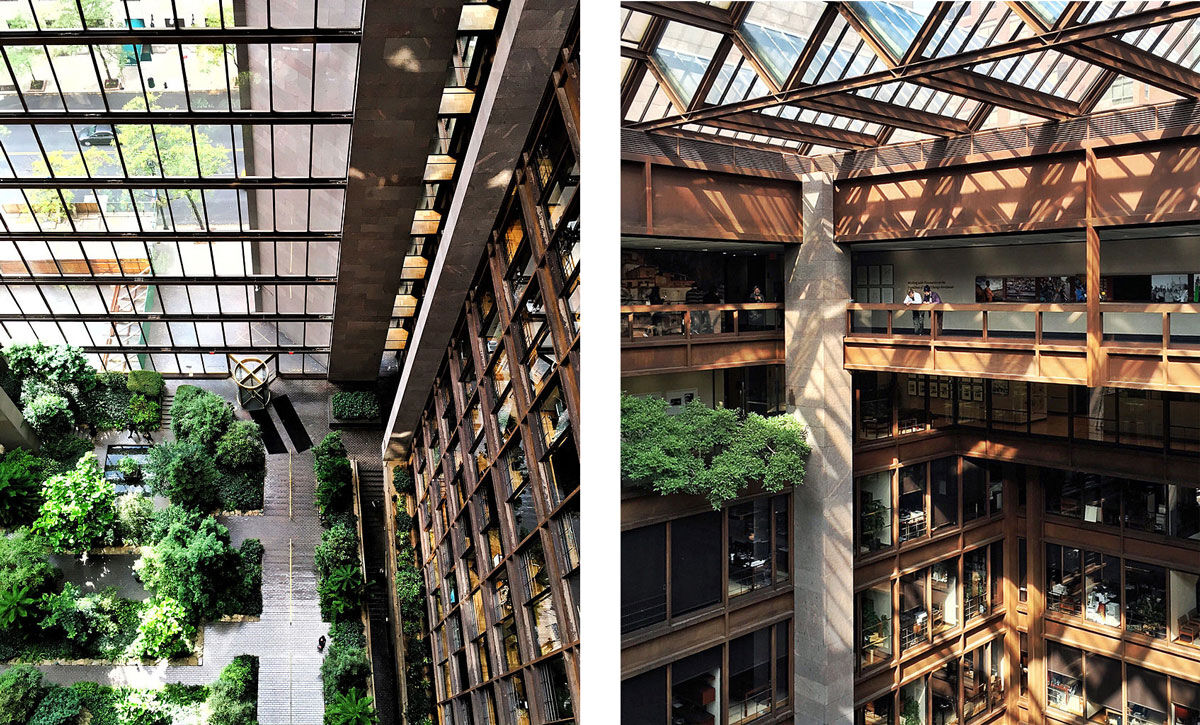 Interior views of the Ford Foundation. Photos by Striped Architect, via Wikimedia Commons.

The Ford Foundation’s headquarters on East 43rd Street is among the city’s most exceptional corporate interiors—and its most striking garden. Designed by Kevin Roche John Dinkeloo and Associates in 1967, the building opens onto a 12-story atrium where company offices are vertically arrayed around an expansive interior glass-walled garden, designed by Dan Kiley. The interior was landmark-designated in 1997 and the citation specifically celebrates Kiley’s abundant plantings, which conjure the effect of a lush forest in Manhattan’s midst. Yet in December 2015, the Ford Foundation announced that some of Kiley’s plants would be removed from the garden, as part of a comprehensive interior renovation; smaller details, like the entrance door, will also be altered. The Foundation has taken pains to insist that the primary goal of the renovation is to make the structure building-code compliant, and that any alterations will be deferential to the building’s original features whenever possible. Yet the extent to which the space is left intact won’t be fully visible until work is completed, which should be done by 2019 as per a deadline set by the city.

Another Roche Dinkeloo design faces a far more grievous threat: the mirrored, marble-clad interiors of their Ambassador Grill and Lounge and the lobby of the UN Plaza Hotel in the same building. Finished in 1976 and 1983, respectively, the spaces attested to the sensuous, pattern-rich predilections of the era—until this past winter, when both were quietly closed to the public ahead of a comprehensive redesign planned by the hotel’s current owner, Millennium Hotels. When preservation advocates got wind of the closure in January, they filed an urgent Request for Evaluation with the Landmarks Preservation Commission, asking that the interiors be designated before demolition permits could be issued. Alas, the LPC has yet to issue a reply, which may mean that the public will never see these interiors again.