Michael Craig-Martin
’s painting Cassette (2002) is an oversized depiction of an obsolete technology. The object has been rid of its labeling and packaging and rendered minimally, more like a schematic or a Platonic ideal than a cherished mix-tape with personal resonance. Its green, pink, and orange colors distance it from reality.
Cassette occupies the central room in “Transience” at the Serpentine Gallery, the Dublin-born London-based artist’s first solo show in a public institution in his hometown since 1989. The exhibition, which includes both new and old work, is a paean to the iPhones, headphones, laptops, game consoles, and watches that clutter the artist’s everyday world—those over-marketed gadgets that transform our lives momentarily before becoming garbage in a future dystopia.
The relationship between artists and technology is currently taking a spotlight in London. As well as Craig-Martin’s show, the Serpentine’s nearby Sackler Gallery is showcasing New-Zealand-born artist
Simon Denny
’s exhibition “Products for Organising,” which deals with the cooption of hacking techniques by corporate and quasi-governmental organizations. In January, the city’s Whitechapel Gallery will host “Electronic Superhighway,” exploring the impact of technology on artists from the 1960s onward. Given the ubiquity of such ideas, the question is not so much why this is happening now, as why it isn’t happening more. 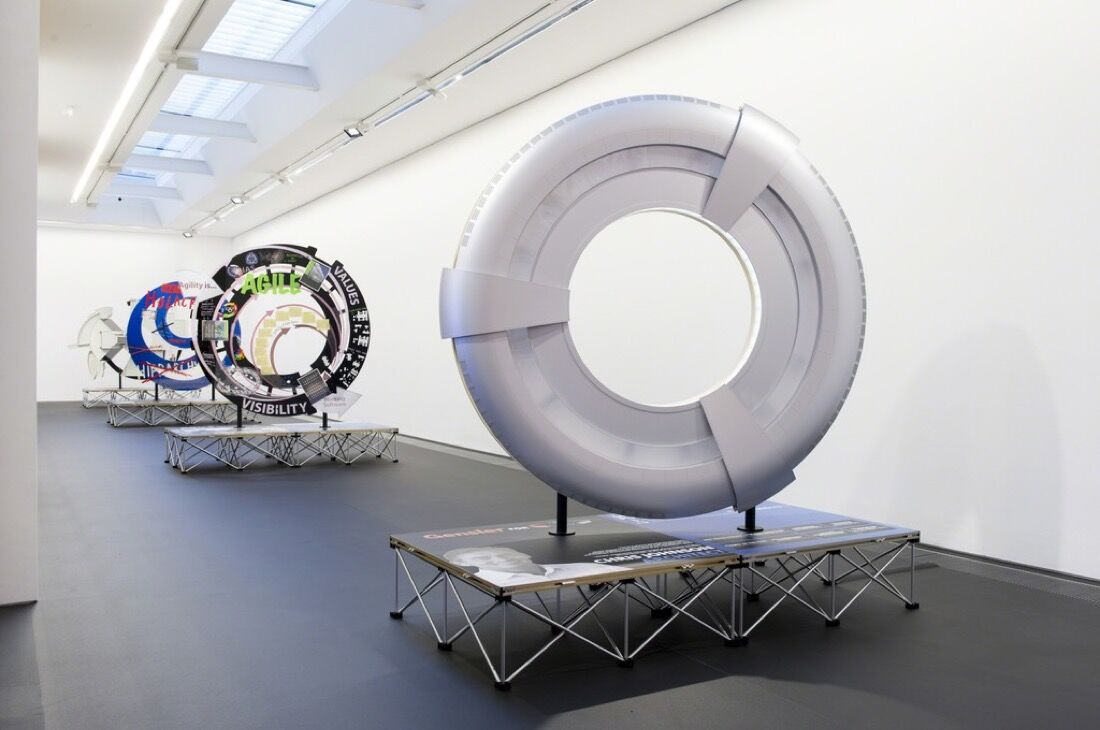 Craig-Martin’s work at the Serpentine spans from the 1980s to the present, serving as indicators of technological shifts. “Because he has been drawing these objects since the 1970s, he has inadvertently charted this momentous change in communications, in how we interact with each other,” says Serpentine curator Rebecca Lewin. The abundance of subjects has increased just as swiftly as gadgets have been rendered obsolete. “When I did the first drawings,” says Craig-Martin in an interview with
Liam Gillick
in the show’s accompanying publication, “it was hard to imagine that these objects would ever disappear.”
It’s not surprising that Craig-Martin came of age in the era of Marshall McLuhan’s pioneering 1964 book Understanding Media: The Extensions of Man, which yielded the theorist’s most celebrated and repeated line, “the medium is the message.” Nonetheless, in an advertising and media culture obsessed with “digital natives” and millennials, Craig-Martin’s generation is seldomly heard on the matter. This is, happily, redressed by “Transience,” through images of laptops, game consoles, and TVs, as well as new wallpaper, created just for the exhibition, showing a pattern of smartphones, flash drives, fluorescent lightbulbs, and other objects transformed, quite aptly, into a backdrop for his canvases. 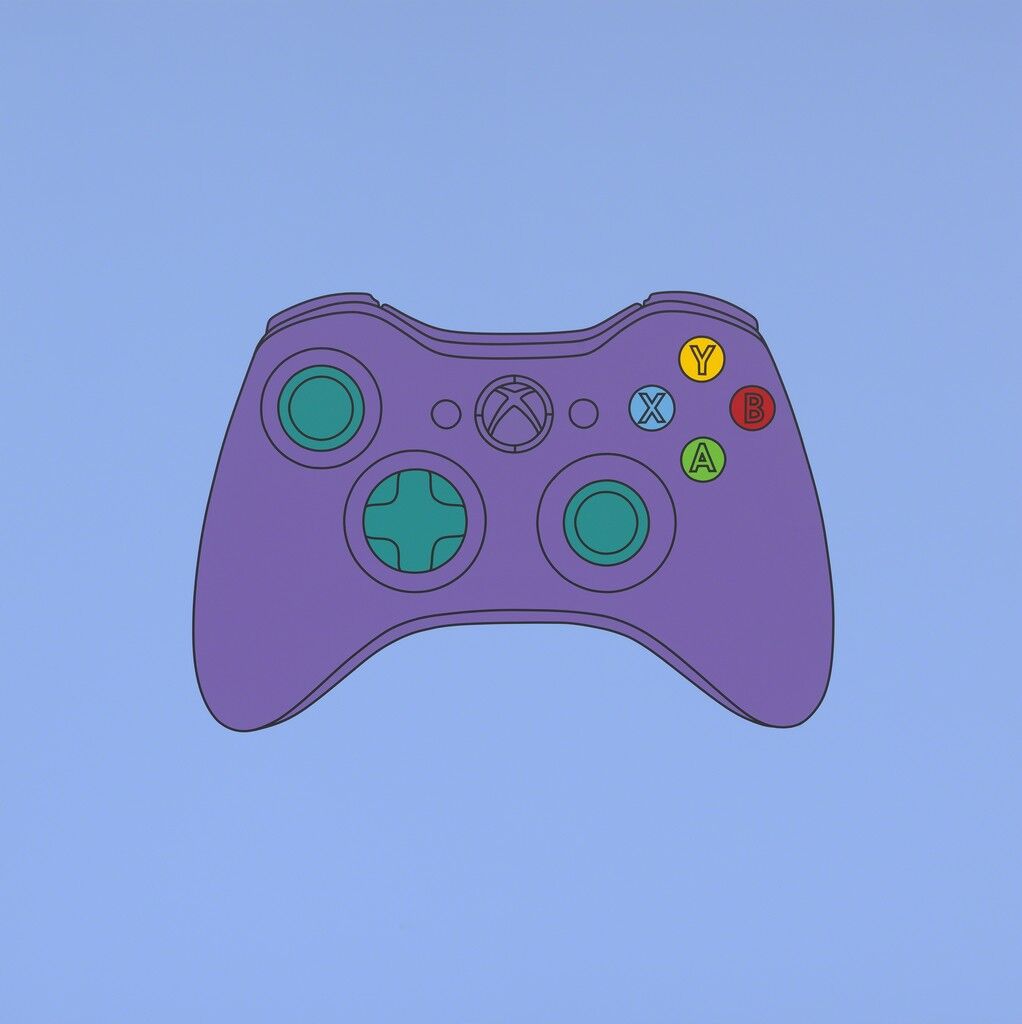 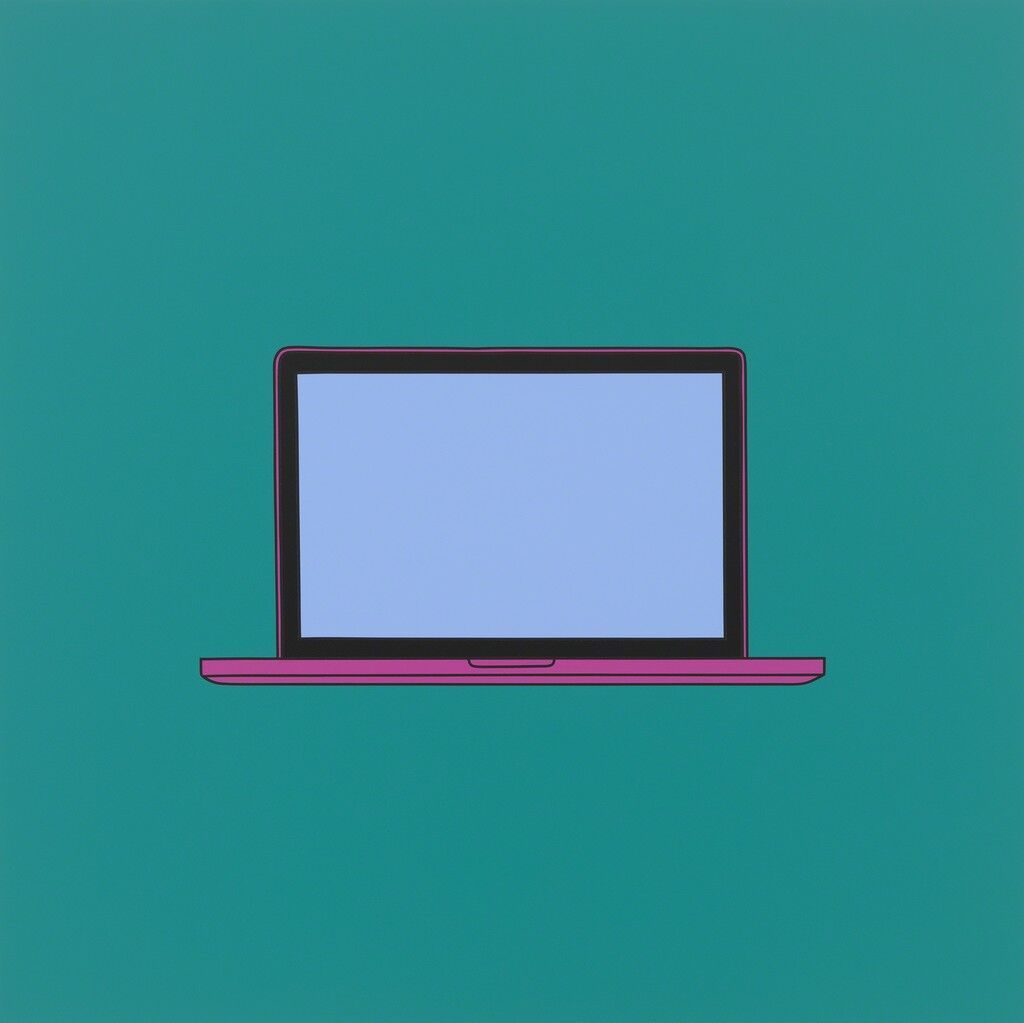 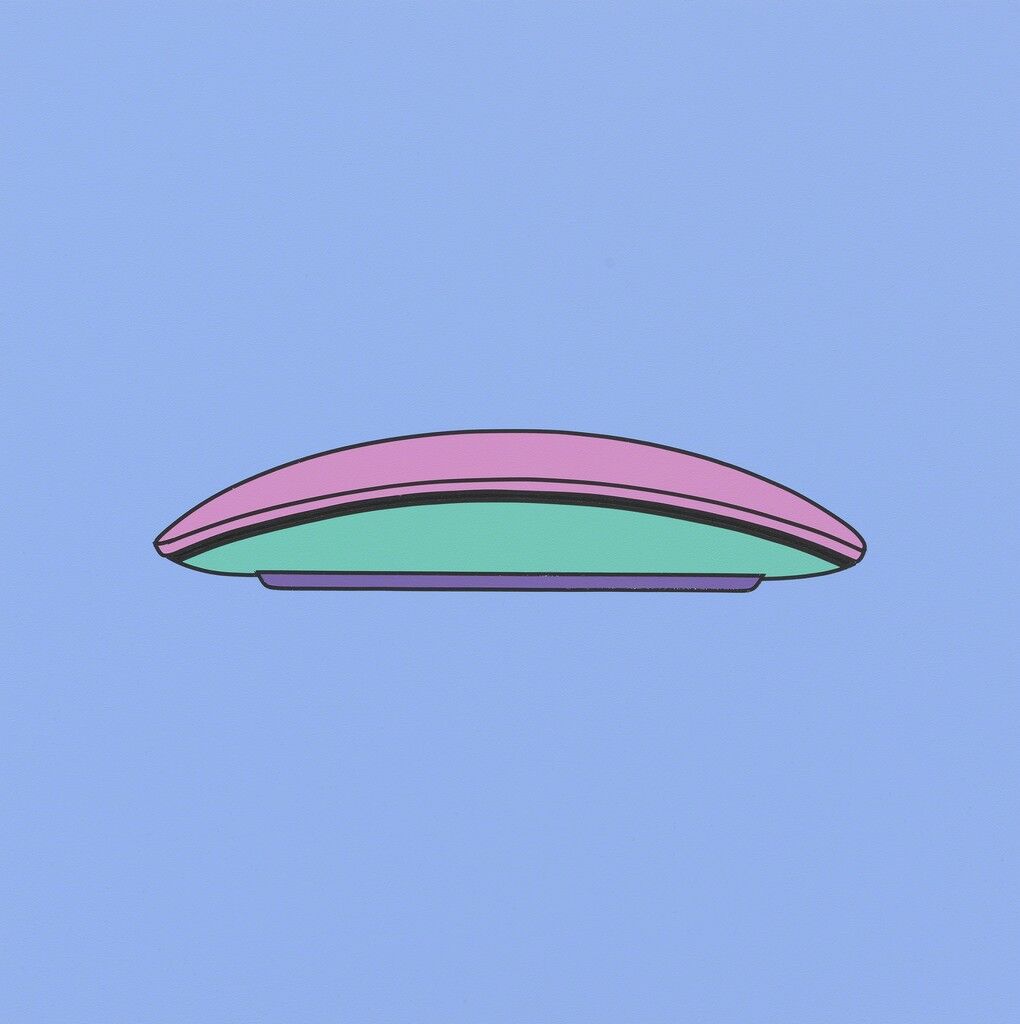 Michael Craig-Martin
Untitled (mouse), 2014
"Michael Craig-Martin: Transience" at Serpentine Gallery, London
Advertisement
In curator Omar Kholeif’s 2014 book You Are Here: Art After the Internet, U.S. artist
Brad Troemel
discusses what he calls “Art After Social Media,” asserting that “since the advent of photography, more people view images of physical artworks in magazines, books, and videos than in person.” While Duchamp’s readymades, and later Warhol’s Soup Cans and Brillo Boxes spoke to the rise of mass production, Craig-Martin’s graphic style—easily recognizable and photographable—assumes a decontextualized life online, an extension of the idea he first formed several decades ago. Instagram posts of Craig-Martin’s show are into the hundreds a week after opening.
While Craig-Martin directly addresses the predominance of new media in his digital work Lightbulb (2015)—whose color gradually changes online, and which is shareable via social media—larger, political questions of digital networks and their relationship with the real world are mainly left to Simon Denny, who takes a sharp critical angle on the murky alliance between technology and capitalism in his Serpentine show. 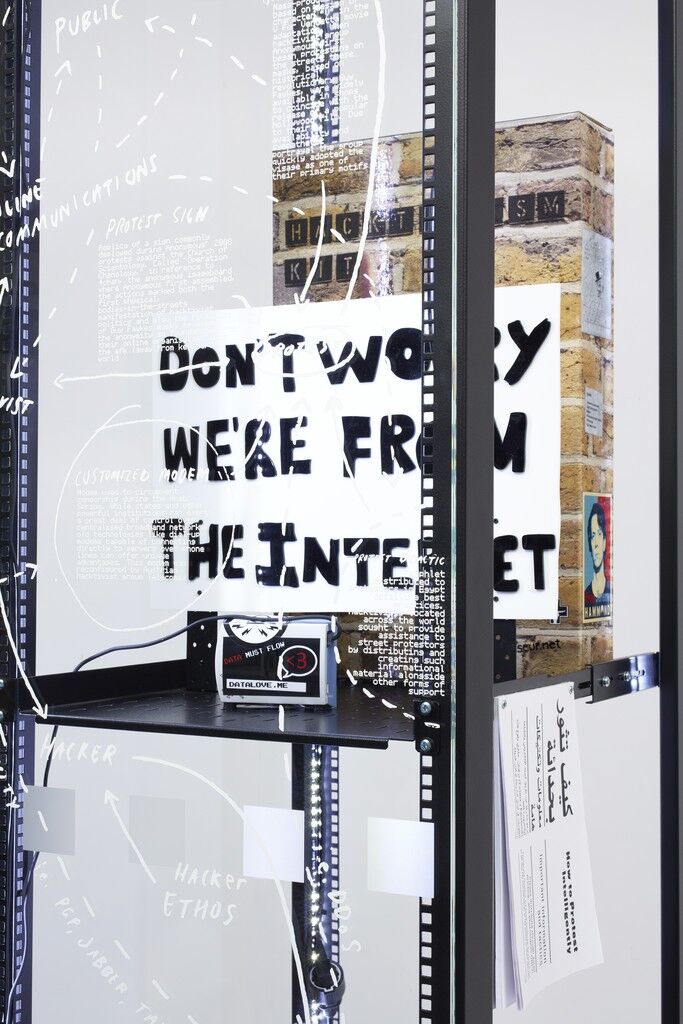 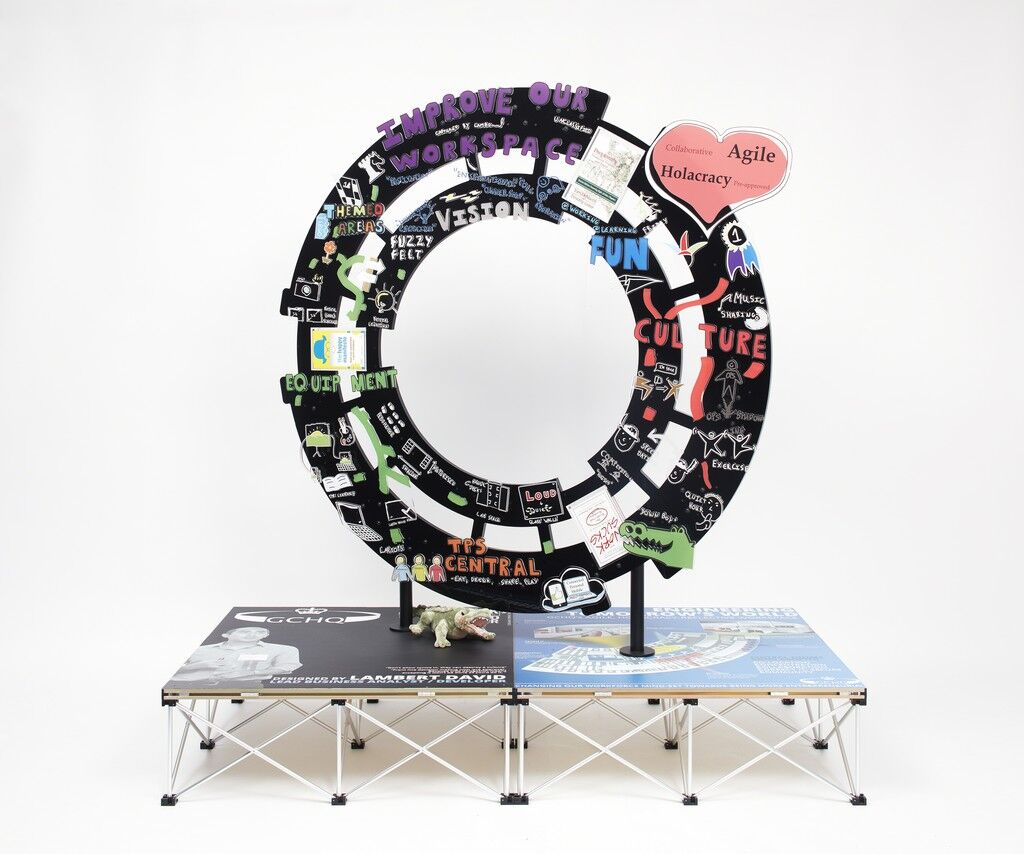 Simon Denny
Formalised Org Chart/Architectural Model: GCHQ 3 Agile/Holocracy Workspace, 2015
"Simon Denny: Products for Organising" at Serpentine Sackler Gallery, London
Through installations—vitrines, display cases, architectural models— packed notes, items, and information, Denny, who made a splash at the Venice Biennale this year, questions the means by which products and ideas developed in institutional contexts are sold back to us. In works such as Modded Server Rack Display with Legitimacy Hack (2015), the artist identifies key moments in the history of hacking. He addresses, for example, the U.S. Senate’s 1998 attempt to learn more about online security weaknesses through hacking. Denny presents these events as mixed-media pieces, as if at a trade fair, with modular display units containing bespoke packaging that markets the hackers’ work. A “Hacker Legitimacy Kit,” the kind of cardboard computer box one might find in a stripmall electronics store, probes the relationship between these individuals and the state.
Denny’s show melds the virtual with the real: It is the hackers themselves, and the behaviors they exhibit, that come under his scrutiny, irrespective of the medium. To artists, it appears that this split is not just blurred, but irrelevant. “I think it’s not that the two are merging, but rather that our experiences are becoming altered in a new way by our interactions with technology,” says contemporary video and performance artist Ann Hirsch, whose work will be featured in “Electronic Superhighway.”  The artist’s recent play “Playground” recreates an encounter in a fictionalized online chat room between a 27-year-old man and a 12-year-old girl, and is loosely based on Hirsch’s own experiences. “With Web 1.0, there was very much your ‘offline’ life versus your ‘online’ one. Now what is happening, as our lives meld with technology, is we’re dealing with a lot of new experiences, feelings, scenarios that we’ve never had to deal with before. I always think about comment threads and how engrossed someone can be in them, how intensified your emotions might get in a comment thread,” says Hirsch. 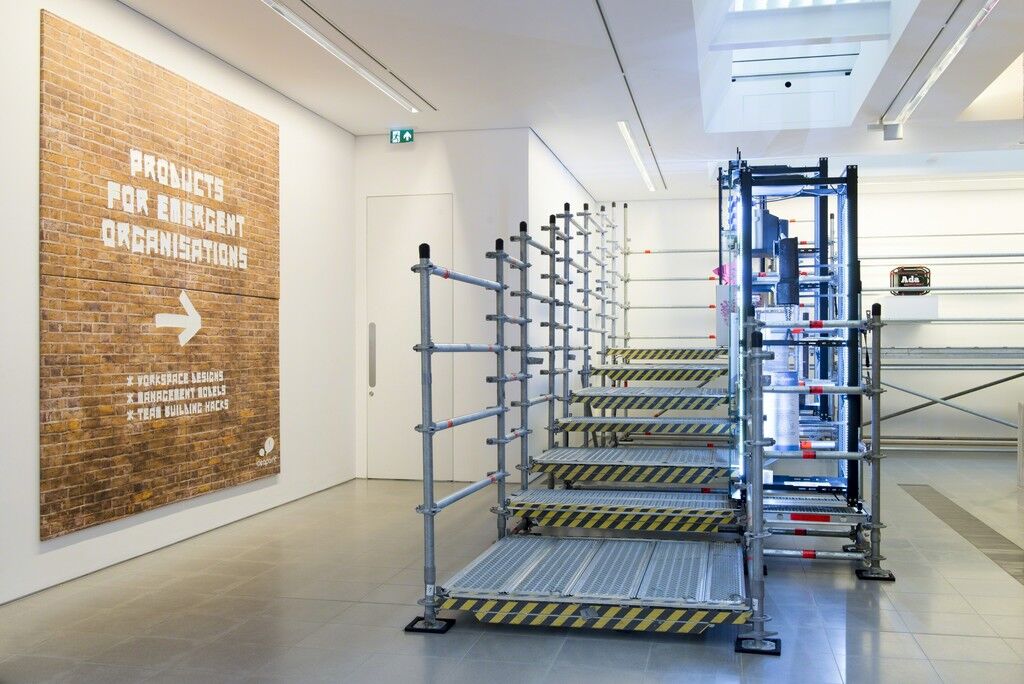 Such issues make interesting fodder for artists. As Craig-Martin tells Gillick in the “Transience” catalog: “All these changing technologies are not just in the objects but in the processes of my own activity as an artist...I just use what’s in front of me. I increasingly think that invention is the realm of design, and observation is the realm of art.”
—Rob Sharp
“Michael Craig-Martin: Transience” is on view at the Serpentine Gallery, London, Nov. 25, 2015–Feb. 14, 2016.
“Simon Denny: Products for Organising” is on view at the Serpentine Sackler Gallery, London, Nov. 25, 2015–Feb. 14, 2016.
Follow the Serpentine Galleries on Artsy.
Related Stories