Ahead of ALAC, How Los Angeles Is Fostering the Next Generation of Emerging Artists

When the Art Los Angeles Contemporary (ALAC) fair opens on January 28th for its seventh edition, we in less temperate climes will be girding ourselves against the January chill. It seems only sensible to follow in the footsteps of artists like
Ed Ruscha
and
John Baldessari
(or more recently
Math Bass
,
Ryan Trecartin
, and
David Benjamin Sherry
) and go west.
ALAC, though expansive, is locally grounded, with 25 of its 73 exhibitor booths occupied by Los Angeles-based galleries. This year the fair will also include a section called Freeways, for emerging galleries under four years old, and and another devoted to independent publishing. A new program of lectures and talks aims to address the changing conditions for artmaking in Los Angeles—and those conditions are increasingly sunny. According to Marc LeBlanc, curator of events and programing for the fair, L.A. has seen an influx of dealers and galleries in recent years. “My friends in Berlin, London, and Paris are more interested in coming to see L.A. than New York,” he muses. “Maybe it has an art community that’s identifiable, one that people can actually see and feel like they have a grasp of.” Although reluctant to generalize about the city’s appeal, LeBlanc notes that the price is right: “L.A. has all the things that Berlin has going for it, including a really low price per square foot.”
Curious how these changes are impacting young artists, I asked several of ALAC’s up-and-coming artists about what drew them to L.A., and how making art in the city has influenced their practice. 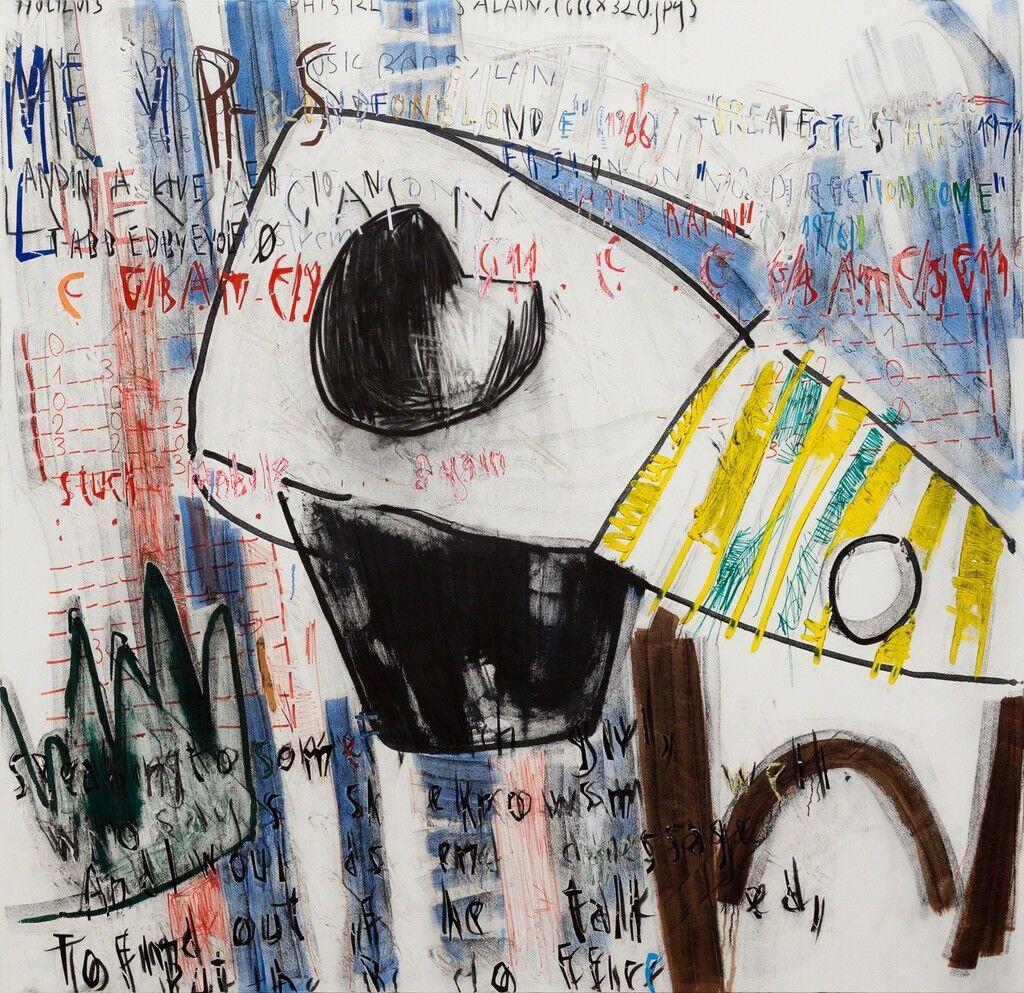 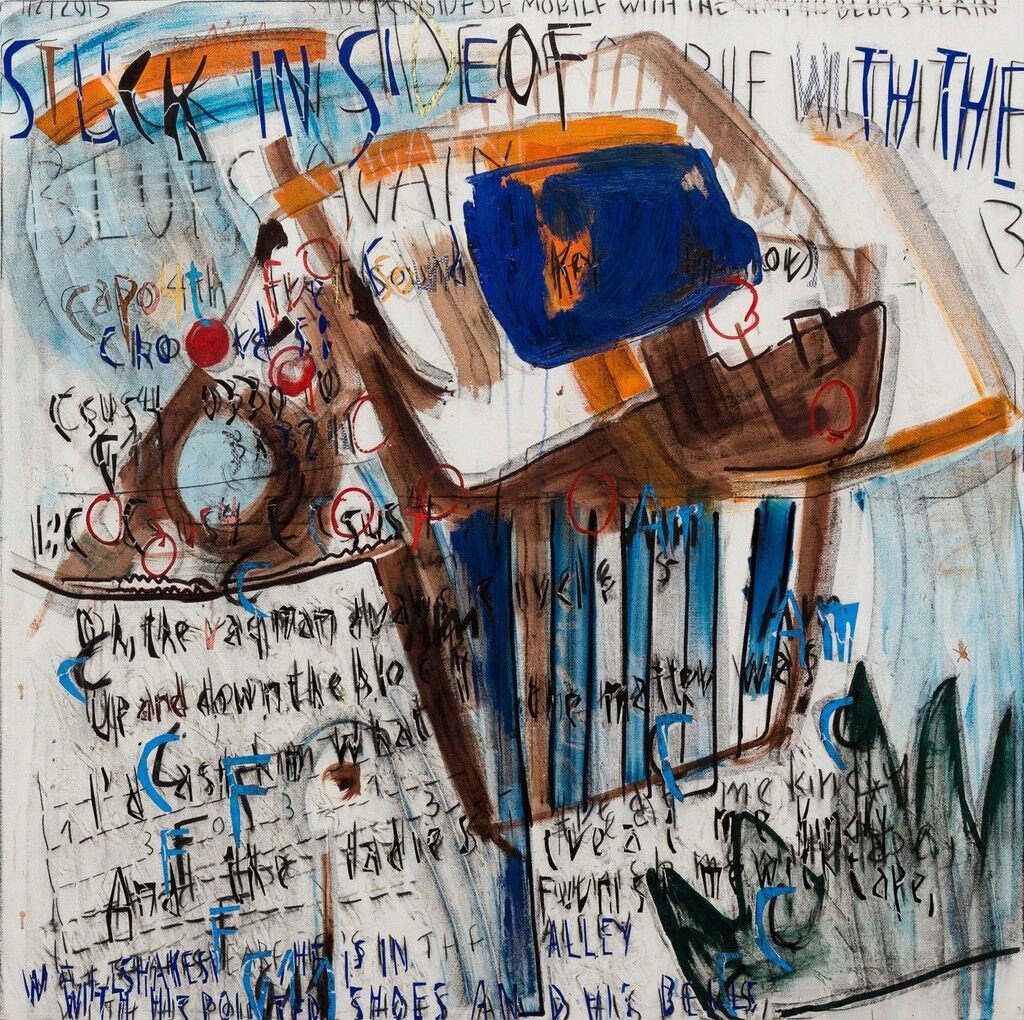 Stokou is a Greek-born artist, known for translating swathes of online data onto canvas. Layers of text flirt with legibility beneath abstract smears and swipes of color, as if
Basquiat
had lived long enough to see the internet. Drawn to L.A. by its location “at the end of the Western world,” she noticed that the city’s abundant light has changed her work: “My palette has gotten brighter for sure. Plus there are so many spectacular plants here—they’ve crept into my mostly non-representational paintings.”
Stokou’s recent work features rows of emoji—culled sets of the icons recently used by her friends, some rendered in brightly colored collage and others left as simple charcoal outlines (as in Recently Used 8971, 2015, shown at Galerie EIGEN + ART last November). Emoji interest her because they’re universal, yet entirely subject to interpretation; a symbol that represents good luck in one culture might suggest very bad luck in another. Stokou sees her work as a loose and shifting narrative, “like the memory of a story your grandmother used to tell you and change a little bit every time.”

On view at ALAC: SMART OBJECTS 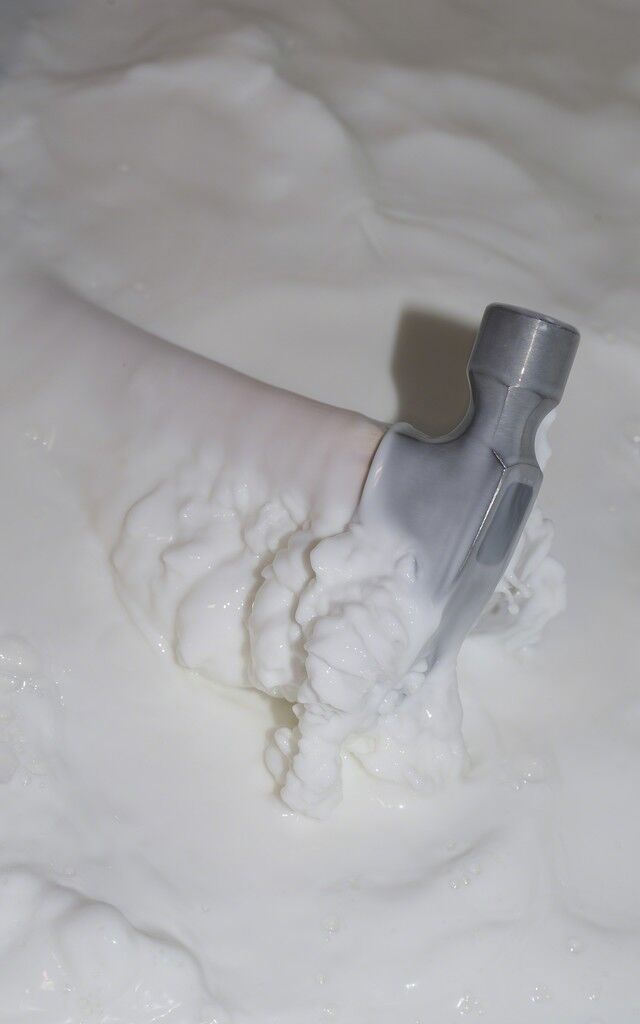 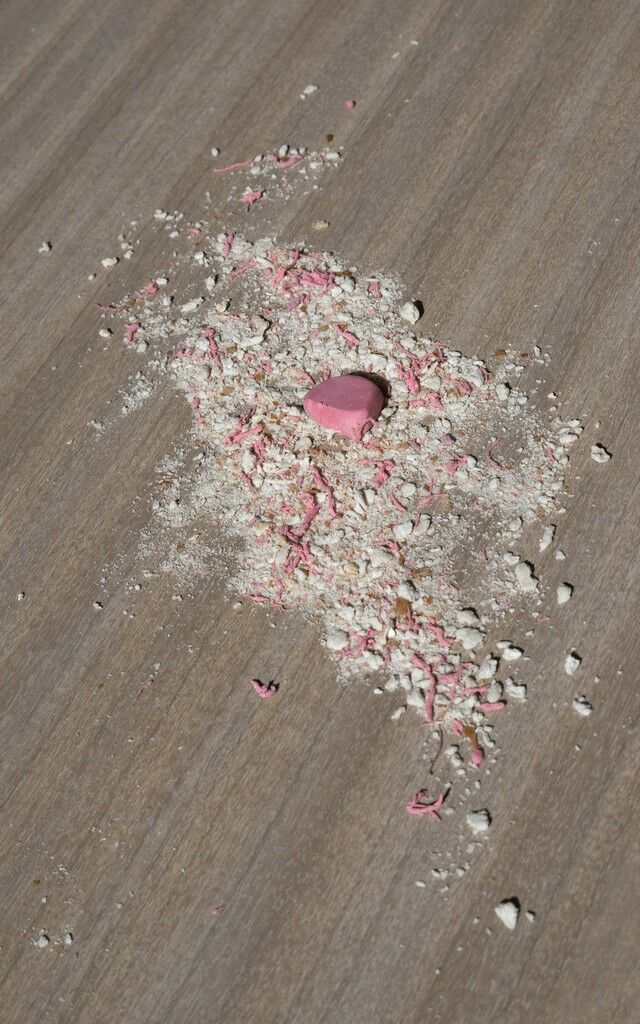 “This is my final destination.”

Boyle is a photographer whose juxtapositions of ordinary objects in unusual circumstances seesaw between pathos and hilarity. In one piece a pair of socks are stuffed full of pale cake (Cake in Socks, 2015), in another a hammer rises through a frothy pool of milk (Milk Hammer Rising, 2016, which will be shown at ALAC). “Photography is the endpoint, but they’re more like object events,” Boyle explains. “I approach making each work as if it’s a short film; each object has a character. I take things that could be considered commonplace and recontextualize them in a manner that heightens the experience of the object. It’s like the moment of climax in a film, where you see the character for who he really is.”
Boyle sees L.A., with its abundance of light and production studios, as the ideal place for artists working in photography and film. He’s also enamored of the diversity of its landscape. “LA. presents the ideal of many environments in one. I can create any setting I want for the photographs I make: indoors or outdoors, urban or suburban, beach or mountains.” He traces his affinity for light and landscape back to his childhood. “I’ve been wearing glasses since I was three, and my dad ground glass as a hobby, so I’ve been fascinated by lens culture my whole life. For me it’s all about being able to capture light.” “Maybe I was running towards a fantasy made up of a million films.”

Stepping into one of Golden’s installations is like falling down the rabbit hole: uncanny, familiar, and physically disorienting. Her show at New York’s CANADA this past September, “A Fall of Corners,” was a large room comprised of four separate, sideways vignettes (chairs and tables, a salad bar, an exercise bike, stained glass windows), each adhered to a different wall. Upon entering, the viewer stood on a raised walkway above a floor of mirrors. Seen from this point of view, each wall became an aerial view of a room, a perspective Golden describes as “suspended [and] omniscient.” At ALAC she’ll be showing what she calls “missing pieces,” objects which hint at the experience of the installation without endeavoring to recreate it. Several of these additions have a distinctly culinary bent: “For the last couple months I’ve been adding things to the tables: melted foam pork chops, cake with caulk frosting, broiled fish made from a pool noodle with gorilla glue for sauce,” she explains.
An L.A. resident since 2009, Golden is grateful for the city’s tight-knit and supportive art scene. “One thing I appreciate is that often more well-established artists put energy back into the community. They participate in weird one-off group shows, buy artwork at unestablished galleries, and seem to just generally re-invest. Like Laura Owens opening 356 Mission with Wendy Yao, and Gavin Brown, and Mara McCarthy opening The Box.” Although costs are still lower than New York, Golden has noticed the rents for industrial spaces have increased significantly in the past six years, a change that has her musing about feasible alternatives (out in the desert? Detroit? New Orleans?), though she would miss the strong community that L.A. offers. 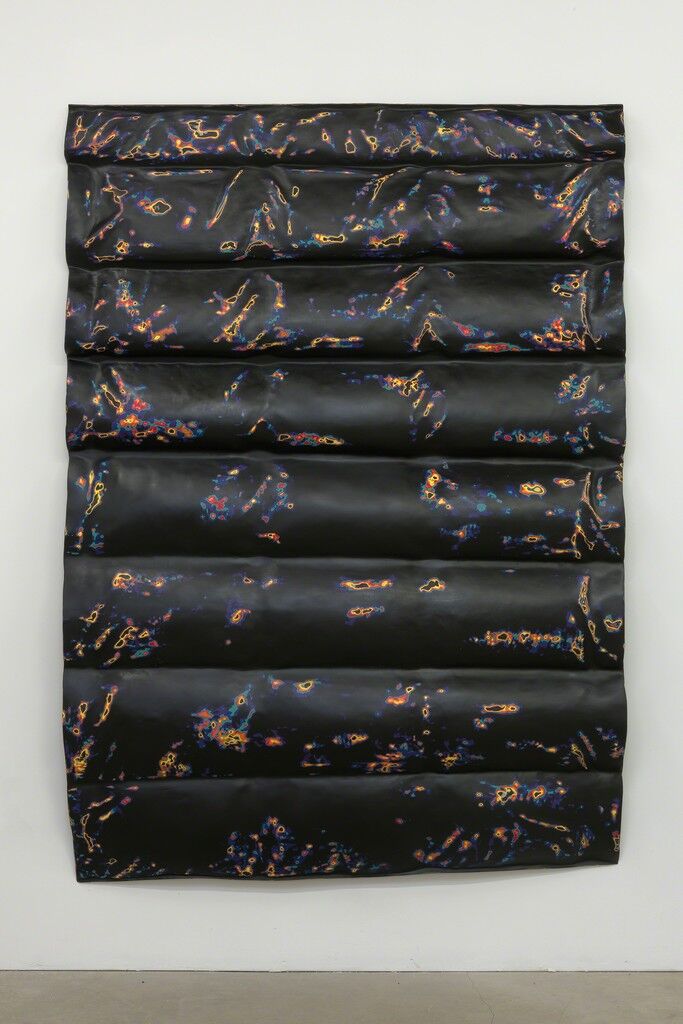 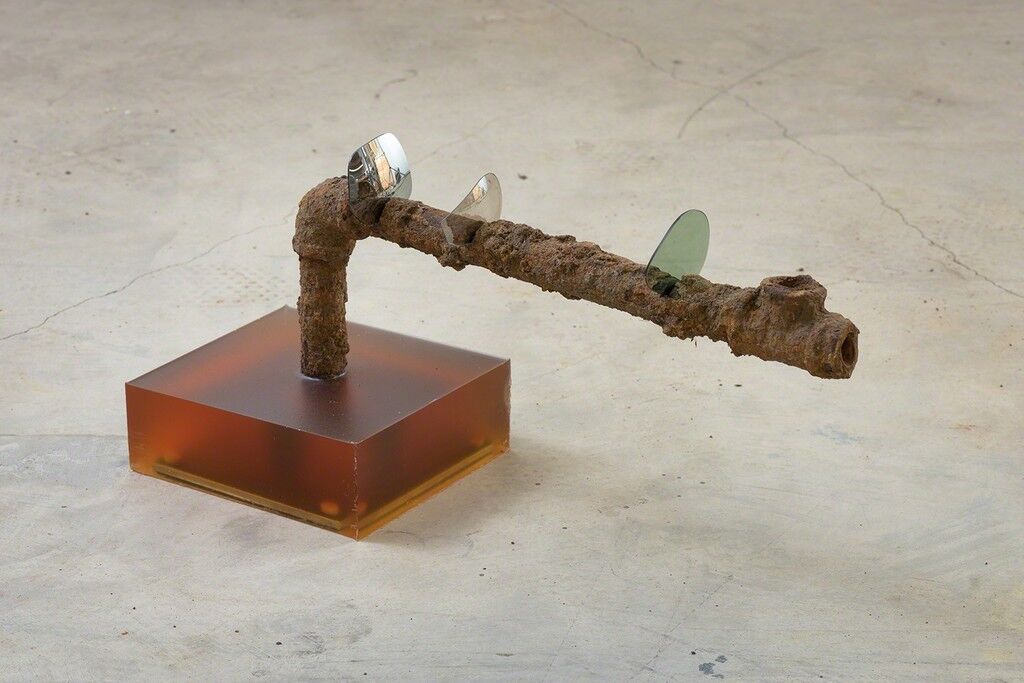 Several of Yaghmai’s recent sculptures, such as a delicate assemblage of lenses, rust, and pipe (Optometer, Lightning, 2015, which will be shown at ALAC), suggest totems of a lost civilization, or tools cobbled together in the aftermath of cataclysmic event. Others feel almost forensic, like a series of aqua-resin and chrome socks (Socks #1-4, 2015) which lie crumbled on the ground as if they’ve been carelessly tossed by one person, then carefully preserved by another. It’s no surprise that the artist is a bit of a scavenger: “I spend a lot of time driving around and seeing what’s out there and what’s being cast off and just hanging around. I take great pleasure in the sort of trashiness of L.A.,” she admits.
As a native Angeleno, how has Yaghmai seen the art scene change in recent years? “It’s changing so quickly!” she concedes. “I can feel that mythic space disappearing. There are a lot of new faces, all moving forward on their own projects. I hope the new influx of artists expands the kind of work being shown around town. I sometimes miss the casualness of the smaller scene, but I feel so lucky to be making work in L.A. at this time.”
Ariela Gittlen
Related Stories