I Baked a Cake in Will Cotton’s Candyland Studio

Casey Lesser
Mar 29, 2017 6:10pm
“Let’s look at some recipes!”
Will Cotton
offers, his face alight, as we head to the kitchen of his Tribeca loft. The New York artist is known for elegant paintings of female subjects like Katy Perry and Elle Fanning lounging in candyland-scapes or donning cupcake crowns. But he also skillfully creates the confections he paints, from scratch. So, on a sunny March afternoon, rather than a traditional studio visit, Cotton’s game for baking a cake.
In the kitchen, which faces a studio space, he produces a copy of Martha Stewart’s Baking Handbook and opens it to a yellow butter cake recipe he’s been eyeing; he then flips to a brown sugar buttercream frosting. “I love Martha,” he tells me as he scans the list of ingredients. “Her recipes are the best.” The affection is mutual: Cotton was commissioned to paint the legendary businesswoman’s portrait in 2015 for the cover of the 25th anniversary edition of her magazine—she even let him adorn her Valentino dress with faux frosting. 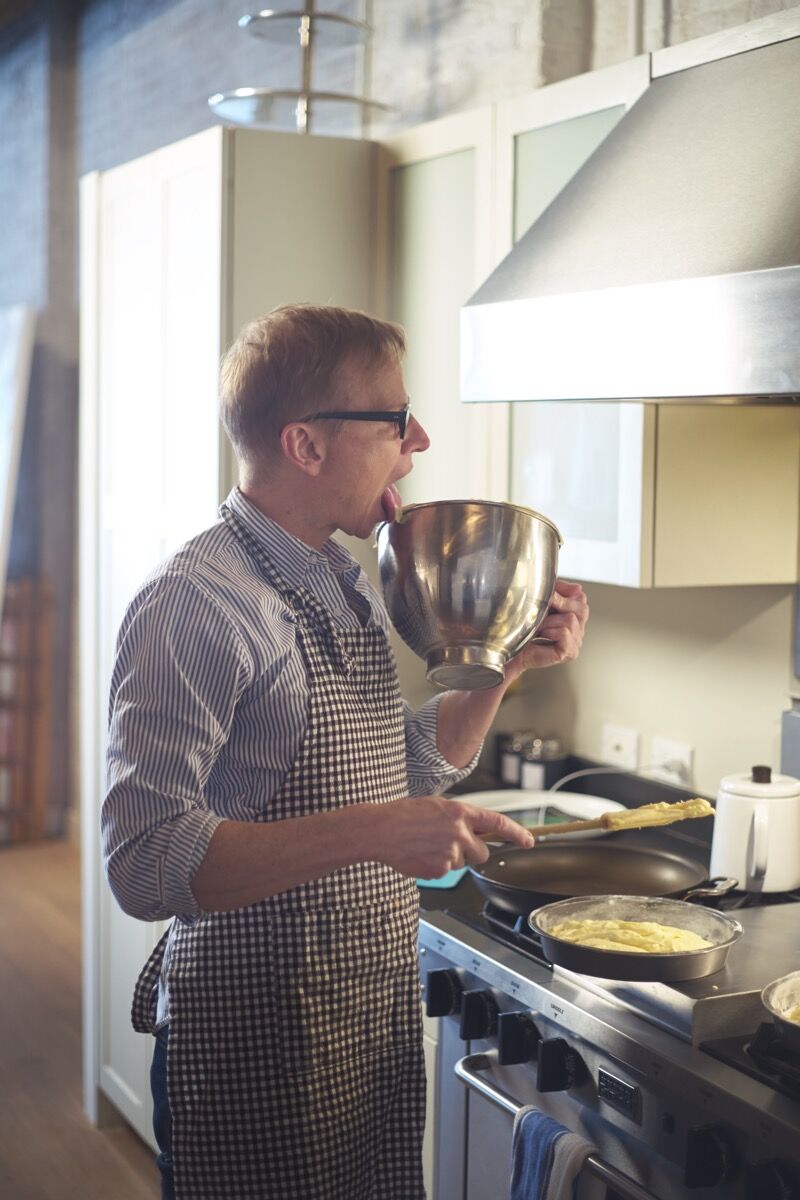 Portrait of Will Cotton in his Tribeca studio. Photo by Alex John Beck for Artsy. 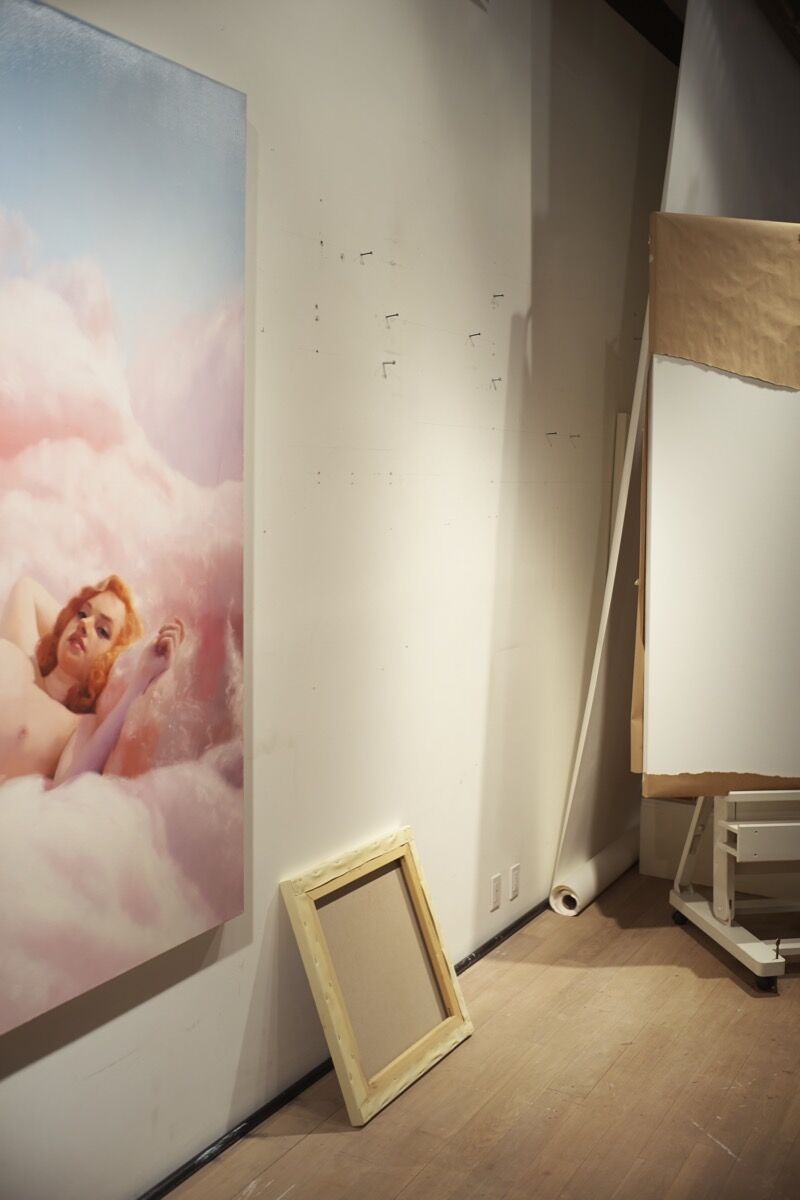 Advertisement
For the past two decades, cakes, candies, macarons, and other desserts have been omnipresent in Cotton’s work. In realistic portrayals of beautiful women, he’s employed sweets for their seductive allure and symbolic associations, whether to embellish a fantastical candy queen or to emphasize the advertising industry’s keen ability to provoke desire.
Next week, he will be honored at the New York Academy of Art’s annual Tribeca Ball, an event that will dole out “Will Cotton Cotton Candy” to salute the sweet-toothed artist.
Cotton’s own desire for sweets extends well beyond his studio practice. As he procures a crimson red apron for me and a black-and-white gingham print for himself, Cotton admits that he abstains from excess sugar in his daily diet, in order to indulge in cookies, pies, and pear frangipane tart—his favorite dessert. 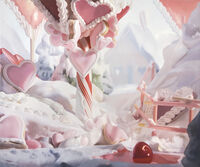 10 Images
View Slideshow
The artist has also been known to host annual bake-offs at his home, where friends, including artists and amateur bakers, present their finest baked goods. Cotton always judges alongside a guest; one year, Stewart held the position. This year it was art critic Andrew Russeth.
As he lines two round cake pans with parchment, butter, and flour, he describes a timely cake from this year’s contest, which was shaped like a rock, with “Resist” scrawled graffiti-style in icing. “That took the prize this year—and it was very tasty.”
He disappears into a nearby closet, which is filled to the brim with equal parts art and baking supplies, and procures a large KitchenAid mixer. As we measure and sift together the dry ingredients, Cotton explains that he began baking in earnest in the mid-’90s, around the time that he started painting cakes.
Keen to create paintings of tall, whimsical stacks of cakes, he’d bought out two bakeries. The experience, both expensive and messy, spurred him to perfect his own baking skills. Though he’s taken a few classes at the Institute of Culinary Education (ICE) since then, “you can learn so much on YouTube now,” he says, “you almost don’t have to take a class.” 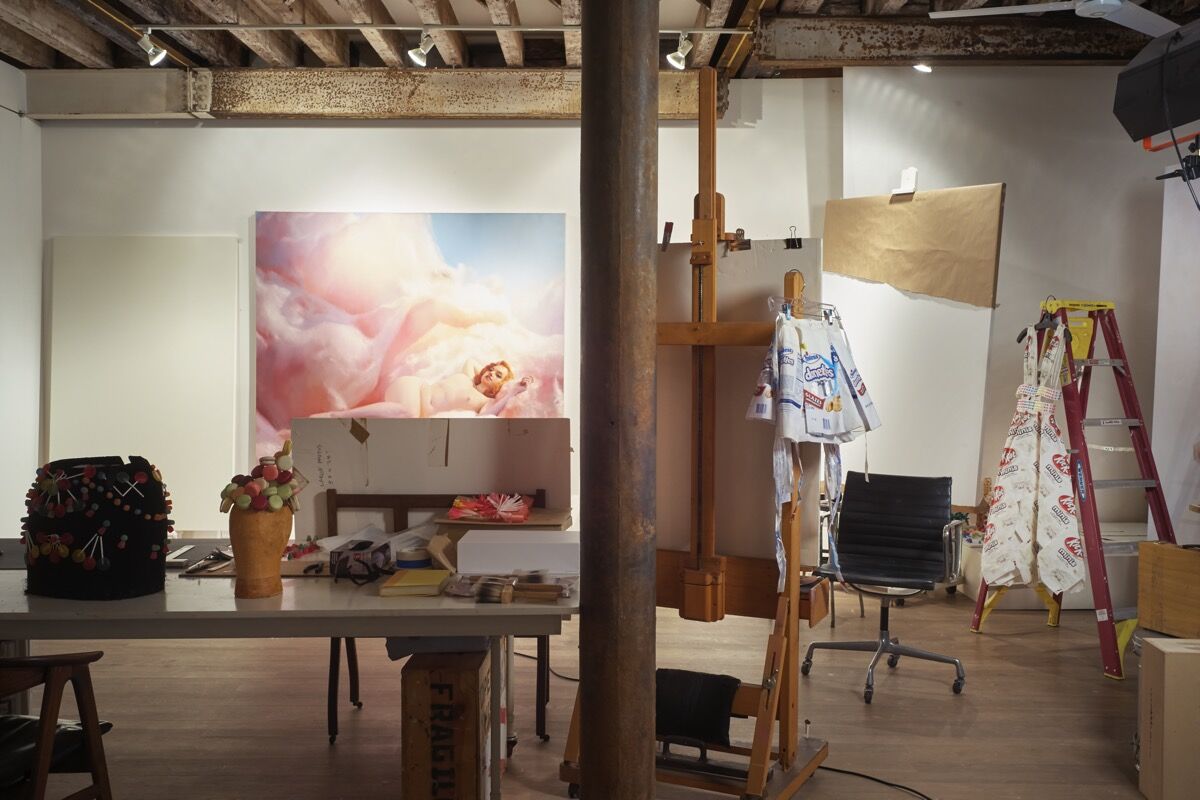 After adding eggs, butter, and vanilla extract (Cotton calls for an extra half teaspoon of vanilla), he revs up the KitchenAid and stops it every so often to methodically scrape the side of the bowl. “That’s probably amazing already,” he says while pouring the mixture into the pans. Moments later he’s licking the excess batter from the bowl. “My god, I just love this.”
With the cakes in the oven and a half hour to kill, we retreat to the front of the loft to sit in the sunlight streaming through large southern-facing windows that look out onto the street. The New York Academy of Art, where Cotton attended as a student in 1987–88 and today is a senior critic, is just a few blocks away. Cotton taught a master class there last weekend, he tells me. “I do a painting demonstration and teach the kids whatever I can think of,” he says with a laugh.
Next week, the Academy’s Tribeca Ball, presented by Van Cleef & Arpels, will be chaired by three of Cotton’s collectors: Naomi Watts, Christina Di Donna, and Brooke Shields, who describes his work as “luscious and ethereal while staying grounded.” President of the Academy David Kratz calls Cotton a “hero” for his ongoing contributions to the school. “The fact that he once was a student here inspires everybody,” he says.
Cotton first enrolled in classes at the Academy during his last year at Cooper Union, eager to gain more experience with figure drawing. “It was definitely hugely formative for me,” he says of his time at the school.
Advertisement 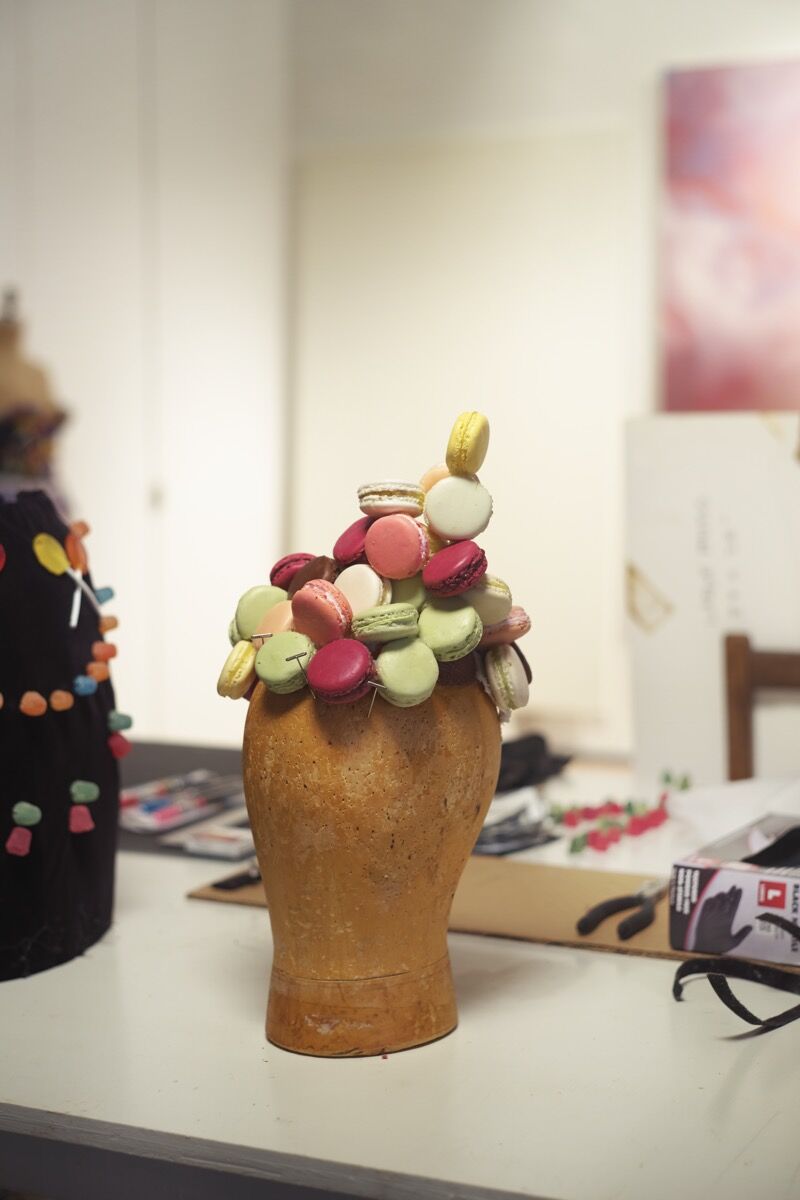 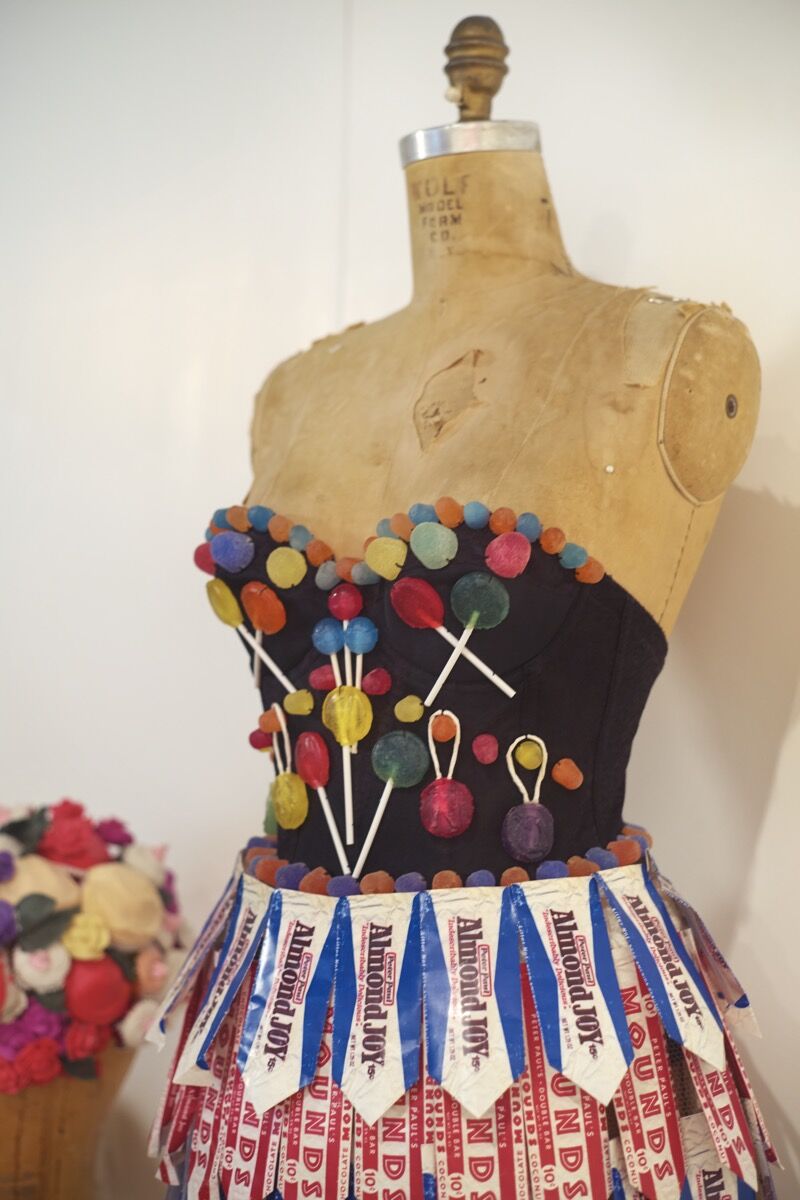 Figure drawing is still an integral part of Cotton’s work, evidenced through his paintings filled with deftly rendered women, but also through his studio practice. Since 2002 he has hired models to pose at his studio—first weekly and now once a month—inviting artist friends to join him to draw. “We run it like an art school thing, except there’s no teacher,” he says.
Cotton’s most recent work, which will debut in a September show at Mary Boone’s uptown gallery, features paintings of women wearing dresses he fashions by hand. He has been creating these dresses (with fashion tips from his girlfriend Rose Dergan) over the past two years, sewing together custom fabric printed with branding like that of Domino sugar bags or Hostess donuts, and adorning bodices with plastic replicas of lollipops and gumdrops, which he casts and creates with silicone molds in the studio.
Cotton first started thinking about creating costumes during his work on the now-famous portrait he painted of popstar Katy Perry for the cover of her 2010 album Teenage Dream, as well as the backdrops that featured in the candy-filled music video for “California Girls.” “I wasn’t the costume person on [the video] and seeing the costumes put into all the things I was painting made me think, ‘Well, what would I do?’” 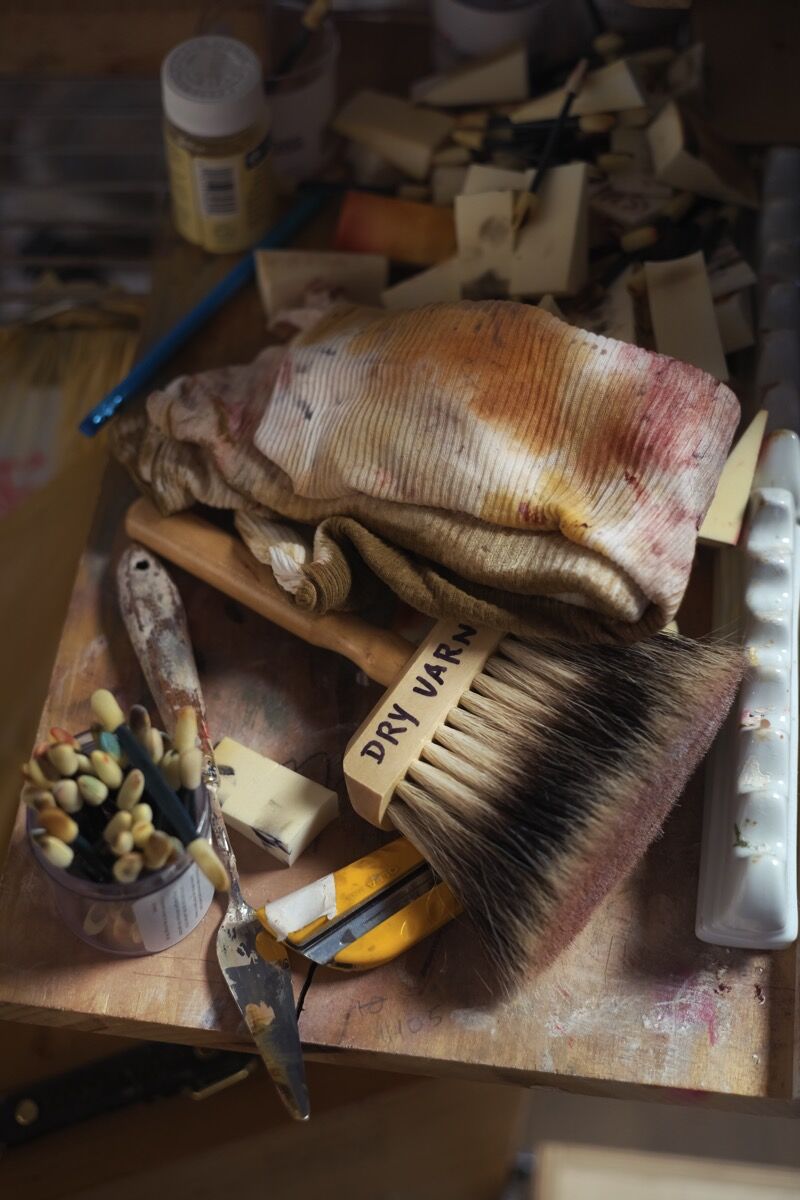 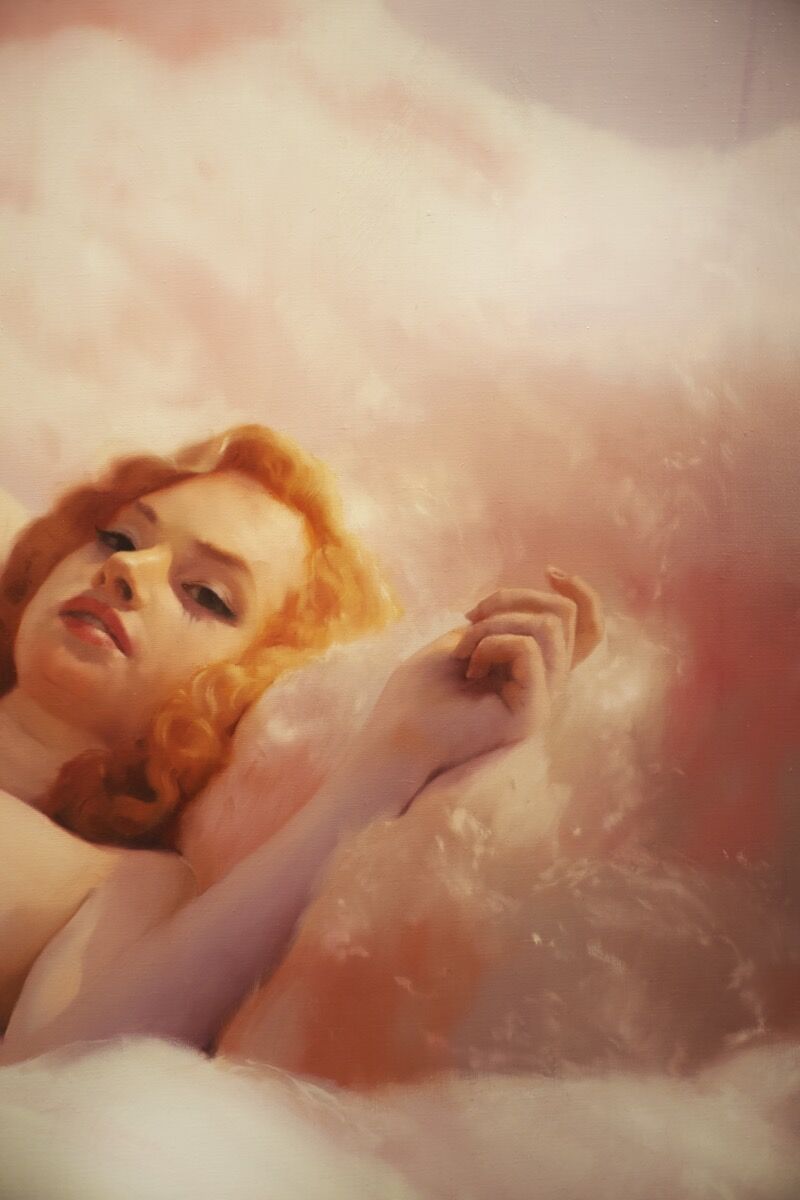 Several of these costume pieces, which Cotton is beginning to see as sculptural works in their own right, were shown in an exhibition last spring at the Orlando Museum of Art, and many are currently propped up across the studio space. Amid a cluster of easels and tables, and a smattering of brushes, palettes, and paints, he’s in the process of painting a model wearing a dress made from white Kit Kat Mini fabric with ribbons of button candy as a belt.
Elsewhere, a mannequin sports an Almond Joy wrapper skirt next to a cupcake-covered hat—which was worn by Elle Fanning in a 2013 New York Magazine spread. Another headpiece resembles a tower of macarons in pastel hues. His painting of a woman wearing the hat hangs nearby.
“With macarons, I’ve baked literally thousands of batches,” he tells me. “I’m always tweaking the recipe and trying new things.” He perfected the recipe after a 2013 collaboration with French bakery Ladurée, when one of the Parisian pastry chefs let him in on a recipe secret (it begins with an Italian meringue, rather than a French one). His phone alarm sounds—the cake is ready.
Cotton tests that the cakes are baked through with a skewer, and removes them from the oven; he then places them in the freezer to cool. We return to the mixer to make the buttercream. 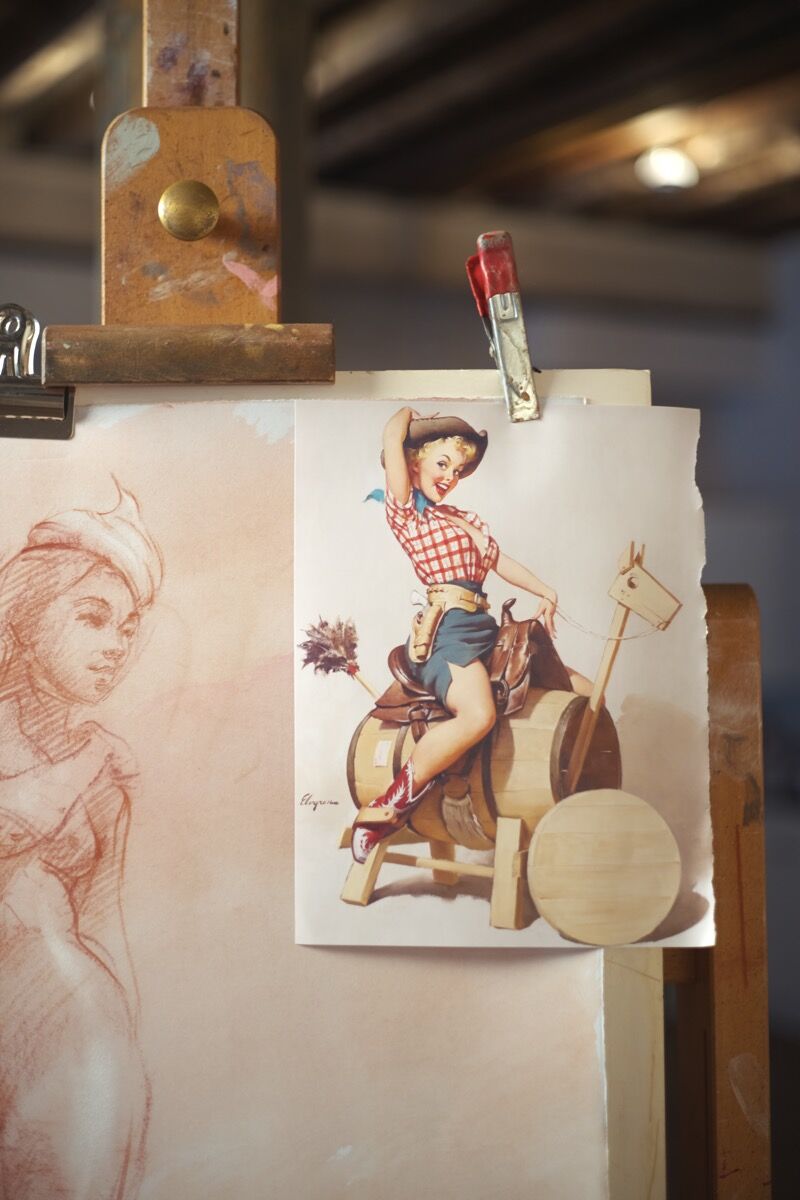 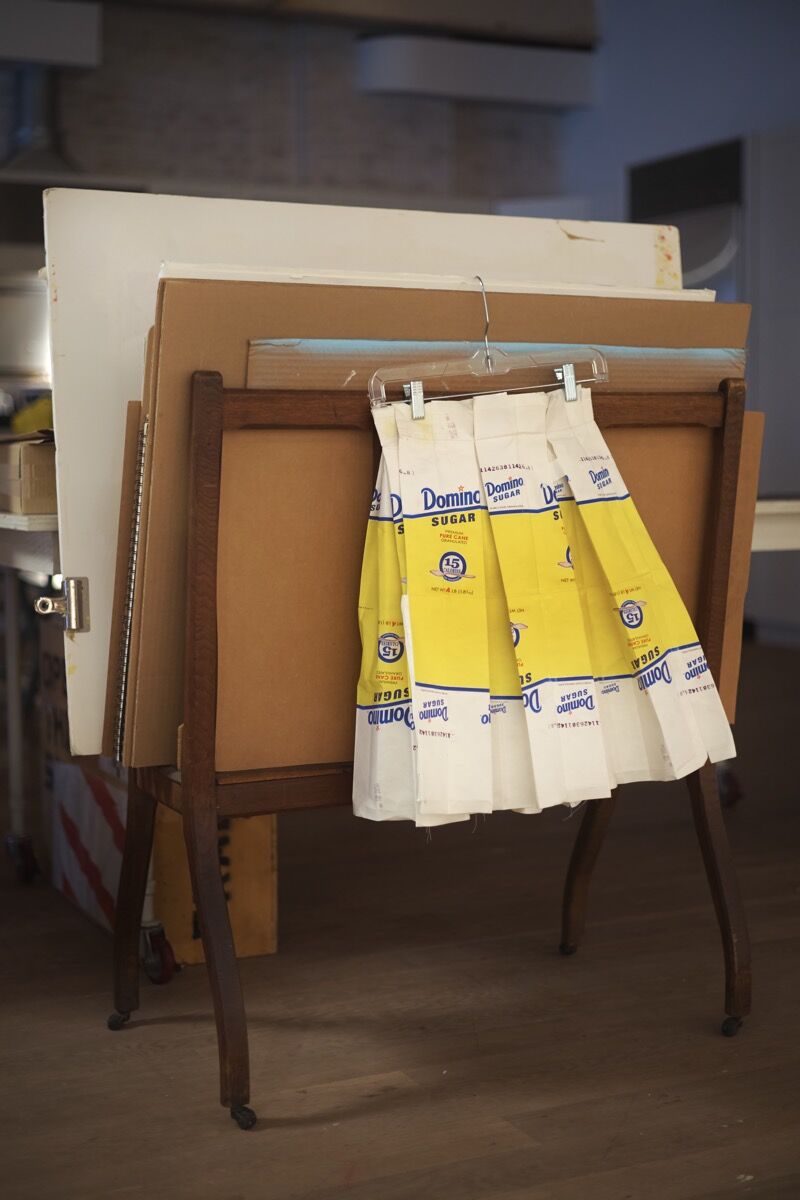 He tells me that he first began using sweets as a metaphor for his own experience with substance abuse. In the ’90s, he made a series of paintings of advertising icons like the Nestle Quik Bunny, Twinkie the Kid, and Hamburglar. Looking back on the art-historical canon, largely populated by paintings filled with religious and mythological iconography, Cotton sought to develop symbolic archetypes that were relatable.
He saw the Nestle Quik Bunny, always slurping large quantities of chocolate milk with a seeming lack of control, as the ultimate drug addict. “It was a time in my life when I was intentionally living a super-hedonistic life. I’d gotten curious with how far I could push it in terms of pursuing pleasure as my daily pursuit, which wound up meaning a lot of drugs and drinking and going out.”
“I thought, ‘How else can I get at this idea of just painting about desire temptation and indulgence?’” He found a Candyland board game that he played as a child. “It just took me right back, as though it was a place I’d gone to visit.” He began to make his own table-top maquettes inspired by the game, including many gingerbread houses, which he then painted.
He’s been sober since 2002. “I feel enough time has passed that I can talk about it a little bit,” he says. “It really did have a lot to do with how I got into painting sweets as a metaphor.” With time, Cotton’s paintings have become more joyful, and though similar subjects prevail, he’s given them new meaning. 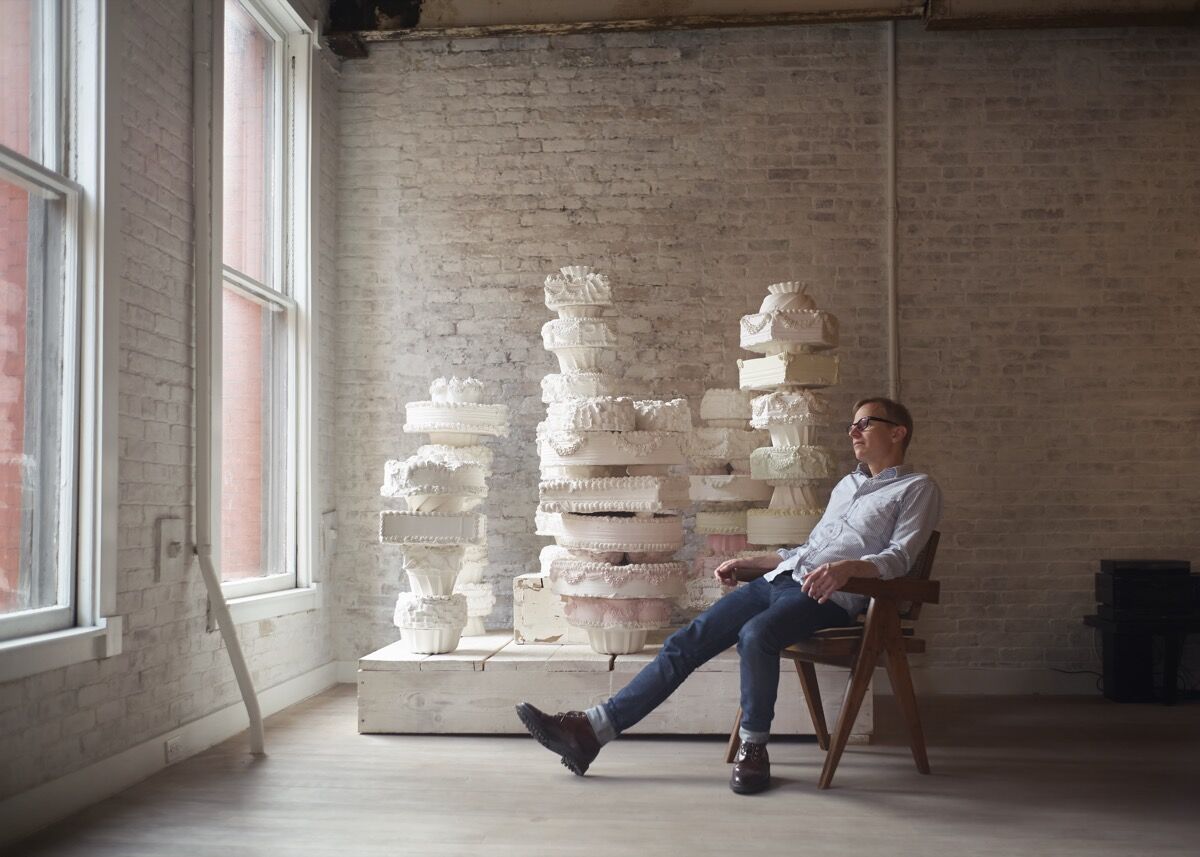 Portrait of Will Cotton in front of Against Nature (2012), in his Tribeca studio by Alex John Beck for Artsy.

In a certain sense, he’s come full circle with the dresses he’s painting now, which are covered with the logos of sugary consumer products. “It gets back into branding and that cycle of desire in which the advertising industry models itself in such a way as to incite desire within us.”
Finished with the frosting, Cotton fetches the cakes from the freezer and sets them up on a stand, slicing off the tops to make two even cylinders, before swiftly applying the buttercream. I thank him for his time—hours longer than a traditional studio visit—before he sends me home with half a cake. (It was delicious.)
“This is the only thing I would do really, to take that much time away from painting,” Cotton says with a grin: “baking a cake.”
Casey Lesser is Artsy’s Lead Editor, Contemporary Art and Creativity.
Further reading in Art