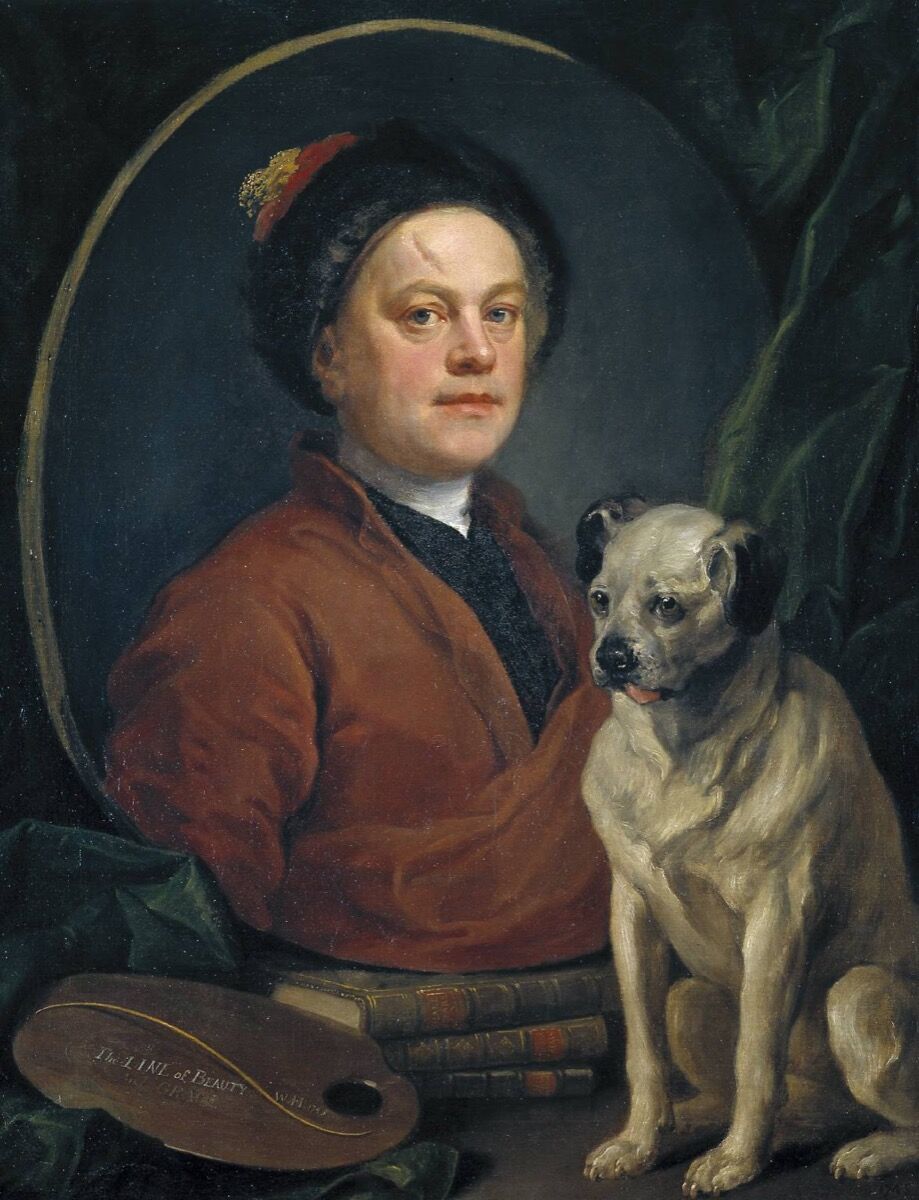 William Hogarth, The Painter and his Pug, 1475. Photo © Tate, via Wikimedia Commons. 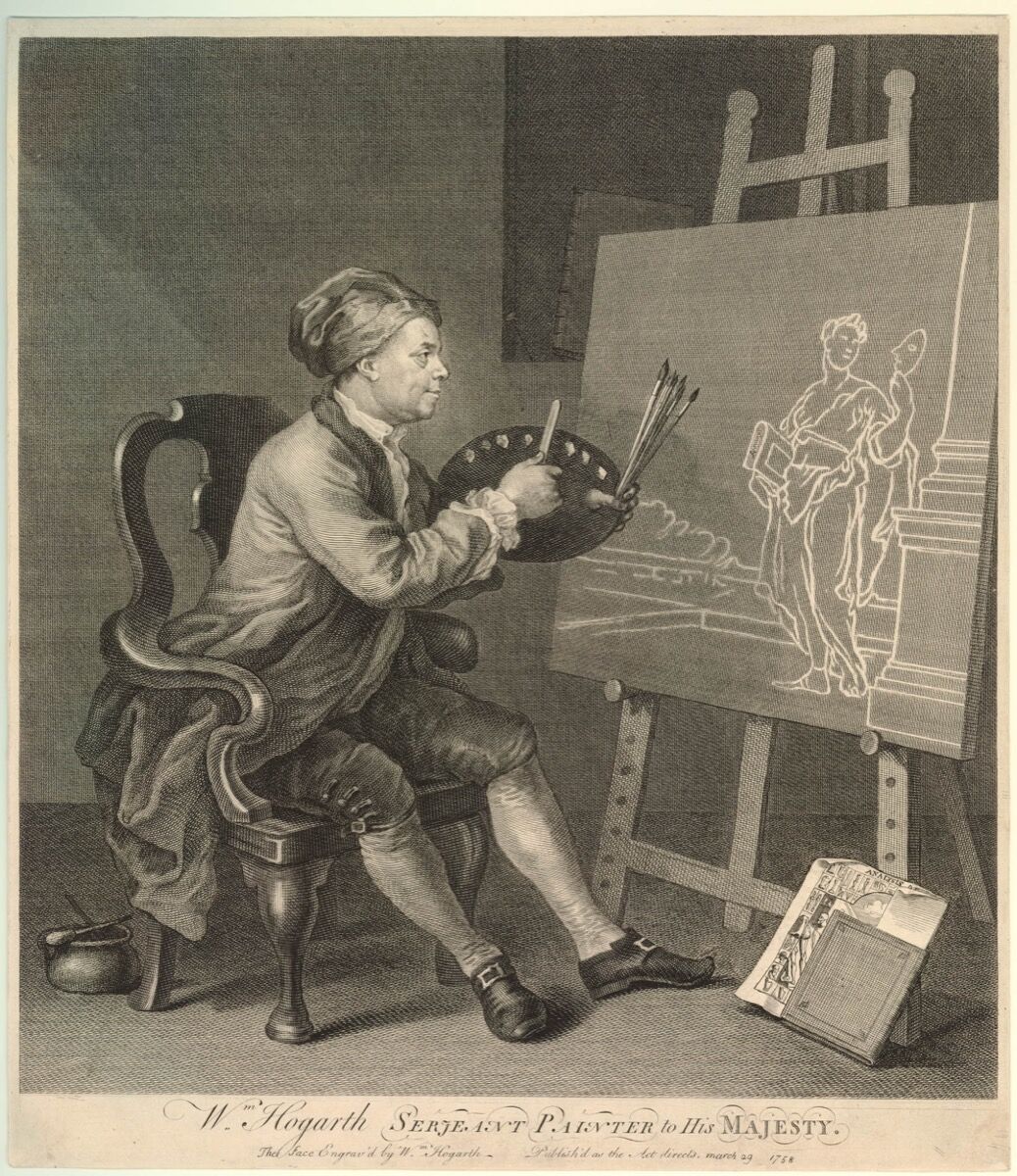 At the time of his death in 1764, English artist
William Hogarth
was beloved by the same people he’d spent the better part of his career satirizing. Over 40 years, he produced an astonishing number of paintings and prints in which he bashed his countrymen for their lewdness, stupidity, and sanctimony. By and large, their response was: “More, please.” His works regularly fetched high prices, inspiring endless reprints and knockoffs, and in 1757, British monarch George II appointed him Serjeant Painter to the King, one of the sweetest plums in a career full of them.
In his poker-faced self-portrait The Painter and his Pug (1745), Hogarth already looks the part of a reluctant national icon. He depicts himself as a painting-within-the-painting, balanced on a pile of magisterial, leather-bound books. The dog on the right side of the frame is his real-life pet, Trump (these were simpler times), while the palette on the left bears an ogee curve, the famous “line of beauty” he discusses at length in his writings. These are appropriate props for an artist whose best work mixes erudition with animalistic unpretentiousness. 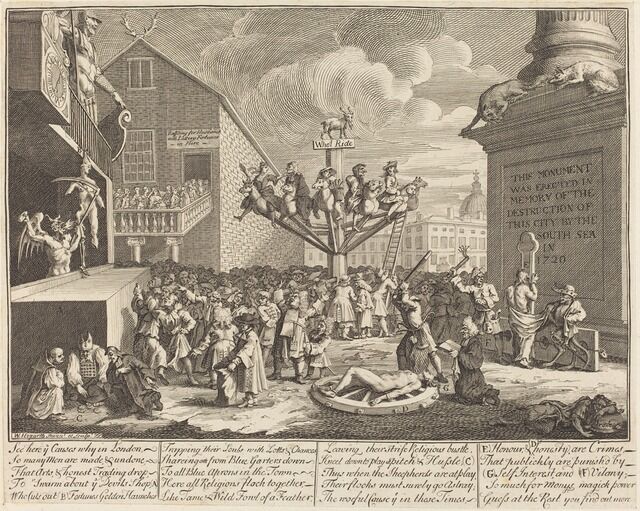 William Hogarth
The South Sea Scheme, 1721
National Gallery of Art, Washington D.C.
In his youth, Hogarth showed few signs of amounting to much. He was born in 1697 to an unsuccessful entrepreneur who ended up in Fleet Street Prison for unpaid debts, a fate so notorious in England that both Shakespeare and Dickens wrote about it. Forced to work to support his family, the young Hogarth became an apprentice to a silversmith, who taught him the delicate craft of engraving. By the early 1720s, he was paying his way by carving designs for publishers and shopkeepers, while also using the same skill set to fashion more elaborate prints of his own design. Initially, he had no way of reproducing or selling his art without the services of a professional printer, who monopolized the required technology and took a hefty bite of the profits.
Hogarth’s earliest surviving prints date from around this period, and one of the many miracles of his career is that, even in his early twenties, his visual style—marked by ribald humor, richness of detail, and a devastatingly sharp eye for faces—already seems completely, unmistakably Hogarthian. The South Sea Scheme (1721), occasioned by a recent economic panic, surveys the sorry suckers—prostitutes, members of the clergy, and everyone in-between—who are about to squander their money on worthless joint stock companies, appropriately symbolized by a merry-go-round. Speculators push and shove for a chance to ride the sinister machine, oblivious to what will happen if they fall off.
A decade later, Hogarth scored his first major commercial success with another panoramic work of social satire: a six-part mock-epic about a young lass who travels to London, prostitutes herself, and succumbs to venereal disease. This series, “A Harlot’s Progress” (1732), so delighted London’s merchant classes that Hogarth, breaking artistic protocol for the time, was able to sell his works directly to buyers instead of depending on a middleman dealer. He even succeeded in lobbying for a law that cracked down on publishers selling bootlegged copies, so that he would continue to earn 100 percent of the profits for his intellectual property. This law, the “Hogarth Act” of 1735, was a milestone in British copyright law and would have been enough to get the artist’s name in the books, even if he’d never drawn another line. 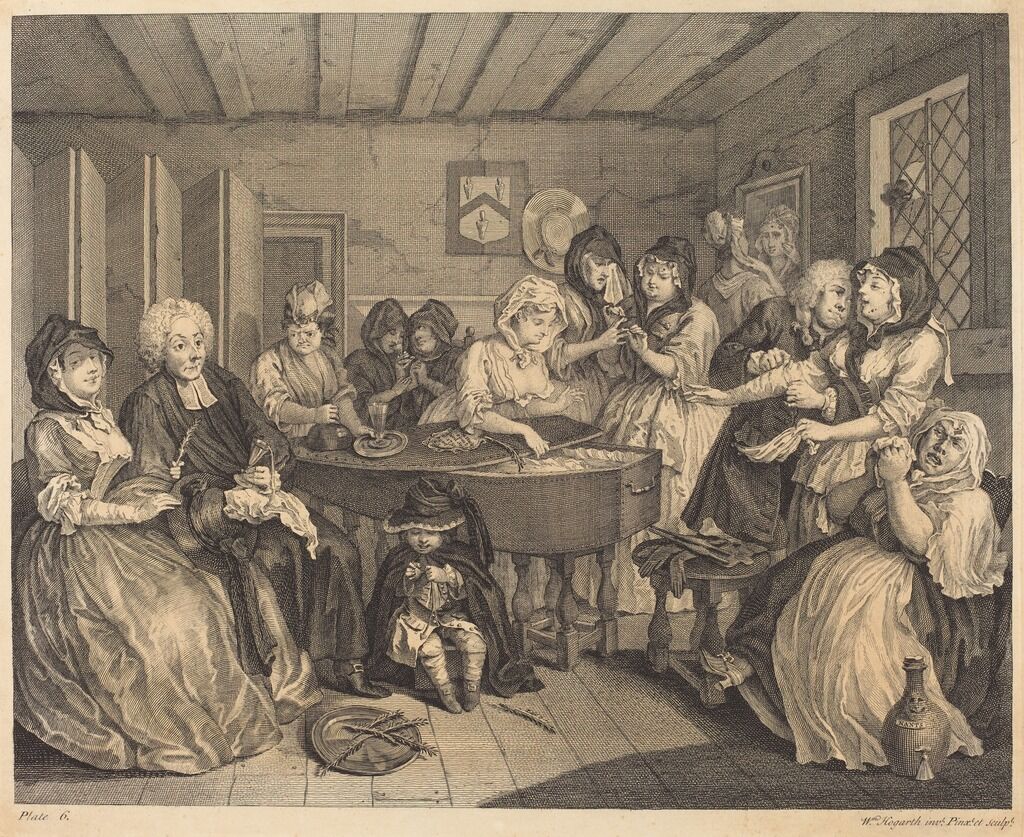 William Hogarth
A Harlot's Progress: pl.6, 1732
National Gallery of Art, Washington D.C.
Advertisement
As it turned out, Hogarth remained a prolific printmaker and painter until the very end. All of the qualities that made his art so in-demand are present in the sixth and final panel of “A Harlot’s Progress,” which depicts the title character’s wake. Like all the best satire, there’s something here to offend everyone. On the left, a hypocritical vicar gropes the woman seated beside him, staring into the distance a little too intently; in the background, another harlot admires herself in the mirror, oblivious to the big syphilitic sore on her forehead. On the right, the harlot’s madam furrows her face into a muddle of grief, rage, and drunkenness. In his later output, Hogarth took on the Parliamentary system, the Methodist church, the bourgeoisie, alcoholics, and the institution of marriage.
If there’s a common denominator for these works, it’s the indiscriminateness of their ridicule. An easy target like a homeless wino receives the same venom as a Tory politician or a minister. Hogarth’s anything-goes approach to subject matter is matched by his compositional technique: There’s rarely a single focal point in his work. The tiny mirror in the background of the sixth plate in “A Harlot’s Progress” seems as amusing and worthy of viewers’ attention as the coffin in the center or the bottle of brandy in the corner. That may be one reason why the series held so much appeal for early 18th-century Brits: Hogarth had found a style that mirrored the hustle and bustle of London on its journey to becoming the biggest, densest city in the world.
But therein lies the strange paradox of William Hogarth: He poked fun at English society, but also did more than any artist of his generation to make English painting a legitimate threat to its more esteemed French and Italian counterparts. In the 1730s, alerted that an Italian artist would be contributing works to St. Bartholomew’s Hospital in London, the artist forwent his usual high fee and contributed two large religious murals, The Pool of Bethesda (1736) and The Good Samaritan (1737), ensuring that the venerable English institution would continue to house English art. 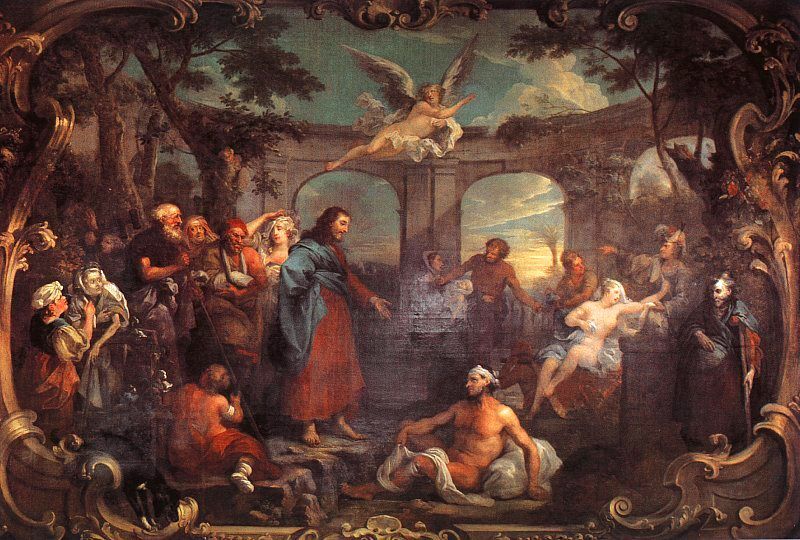 Hogarth composed dozens of uncharacteristically bland paintings featuring such “serious” subjects. His interpretation of Ferdinand courting Miranda (ca. 1736) from Shakespeare’s The Tempest, for instance, is stiff and humorless—it’s hard to believe the image and The South Sea Scheme are by the same artist. Late into his career, Hogarth seems to have nursed ambitions to become a painter of lofty literary and historical scenes, proving how wrong artists can be about where their talents lie.
Even some of his livelier, more representative works are unexpectedly earnest in tone. Unlike many other vicious satirists, Hogarth very often stood for something. Two of his most iconic works, Beer Street and its mate, Gin Lane (both 1751), were intended to boost enthusiasm for a specific law, the Gin Act, which raised taxes on spirits in an effort to curb excessive gin-drinking (and also, less magnanimously, encourage consumption of domestic beer). Inhabitants of the fictional Beer Street are, in Hogarth’s bafflingly naive rendition, cheerful and productive; the folks living on Gin Lane, however, are insane, suicidal, or worse. It’s hard to imagine
Francisco de Goya
or
R. Crumb
—to name two masters of caricature frequently likened to Hogarth—expressing such faith in one measly law (though, to be fair, the artist had learned early on just how useful one law could be). 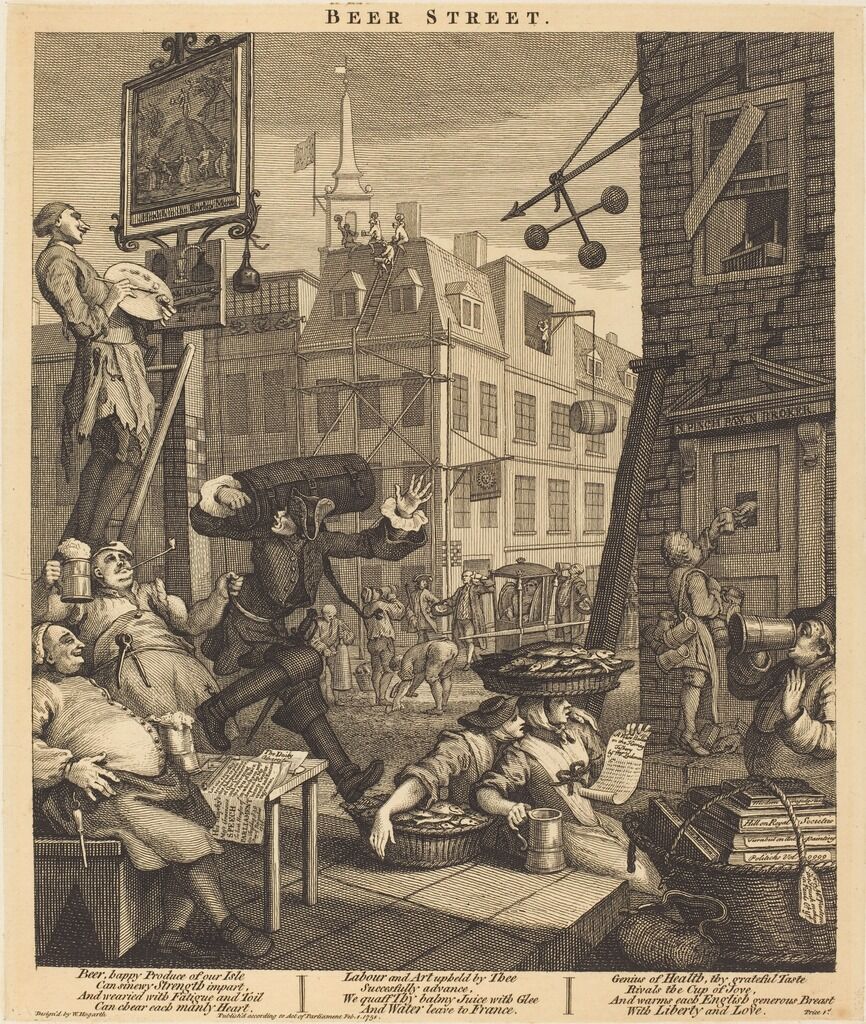 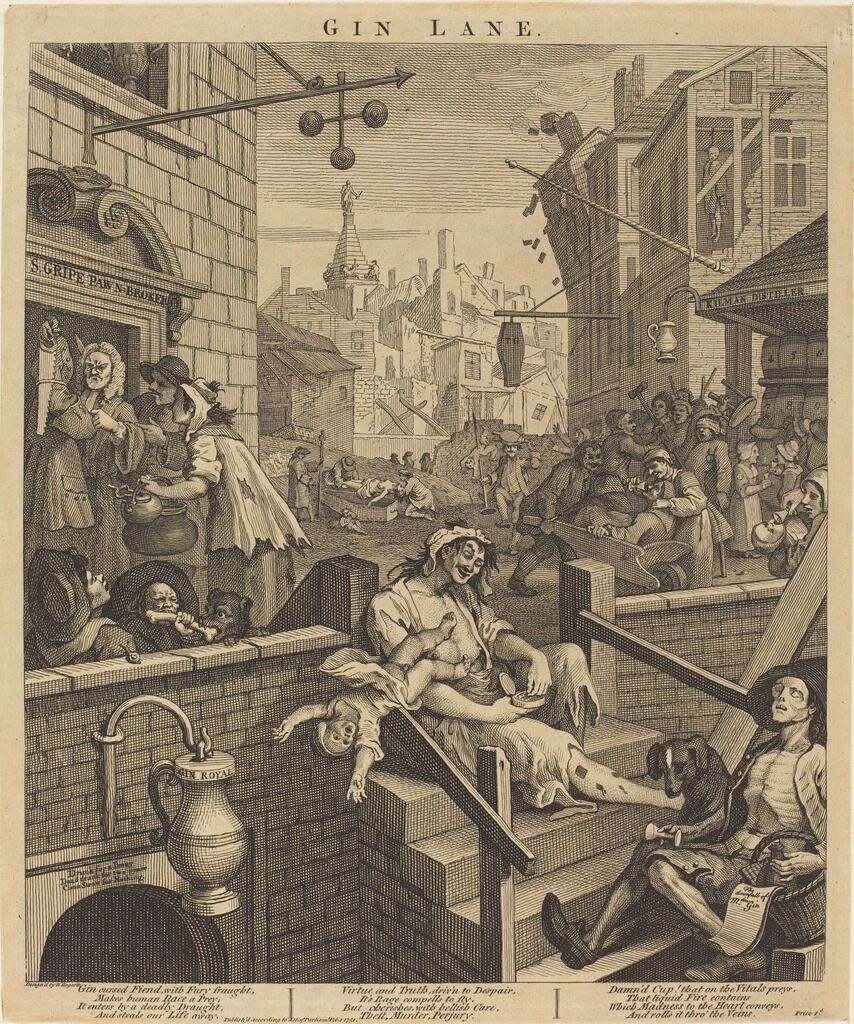 William Hogarth
Gin Lane, 1751
National Gallery of Art, Washington D.C.
“An innovative champion of British art,” ran the press release for Tate Britain’s 2014 Hogarth exhibition, occasioned by the 250th anniversary of his death. Writing around the same time, Jonathan Jones of The Guardian countered that Hogarth “is the first artist to have systematically portrayed a capitalist, modern society. He is also the first to have denounced it.” The real William Hogarth was a much more complicated character and all the more compelling for it: a streetwise rogue who mocked his country and regularly bit the hand that fed him, but also an old fuddy-duddy who served the king faithfully and painted, to borrow Apollo Magazine’s blunt phrase, a lot of “dull portraits of men in wigs.”
All great satirists, according to the critic Robert Hughes, are outcasts in their own countries. Hogarth is the glaring exception to this rule. That’s partly because, during his lifetime, he succeeded in being all things to all people. Centuries later, the debate rages on. Art historians claim him as a radical, a patriot, a reformer, a liberal, a proto-socialist, a conservative. They all seem to have doubts about his political position, but none doubt his genius. It’s easy to imagine Hogarth watching the controversy from beyond the grave, his poker face replaced by a big, mirthful grin.
Jackson Arn
Cover Image: William Hogarth, Marriage a la Mode (The Tête à Tête), 1743. Image via Wikimedia Commons.
Related Stories

What You Need to Know about J.M.W. Turner, Britain’s Great Painter of Tempestuous Seas 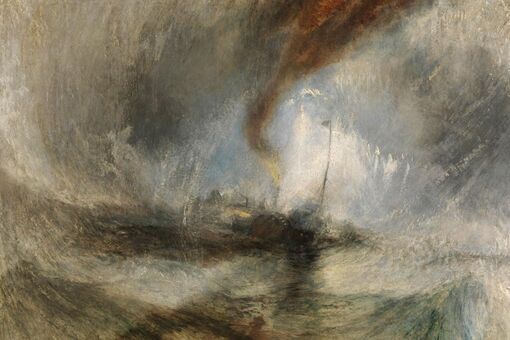 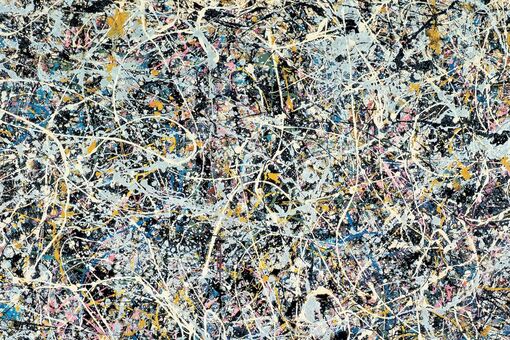