Wolfgang Tillmans Wants You to Find Spirituality in Photography 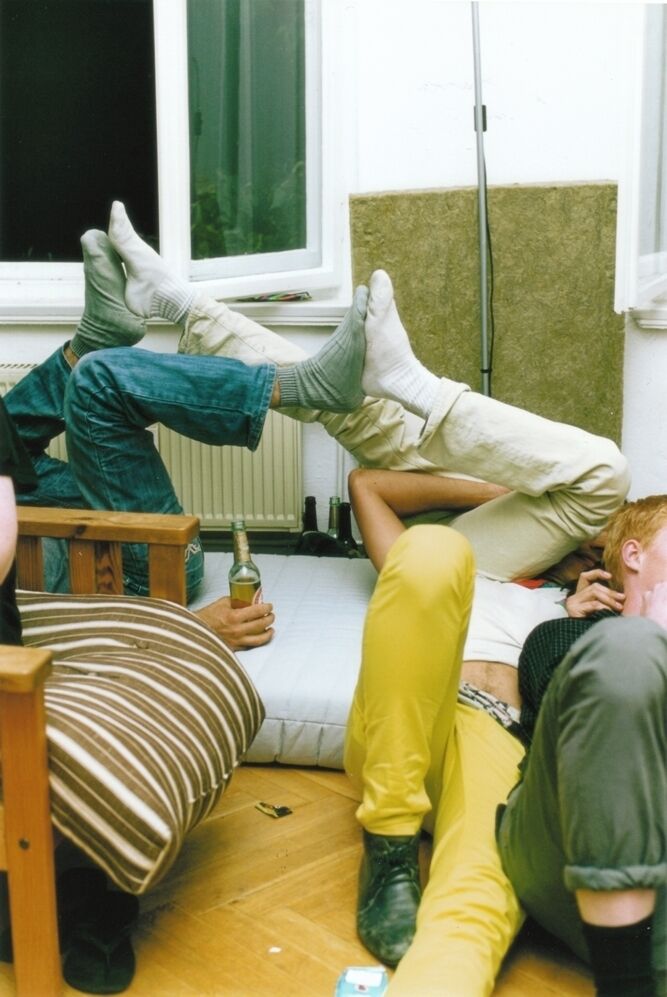 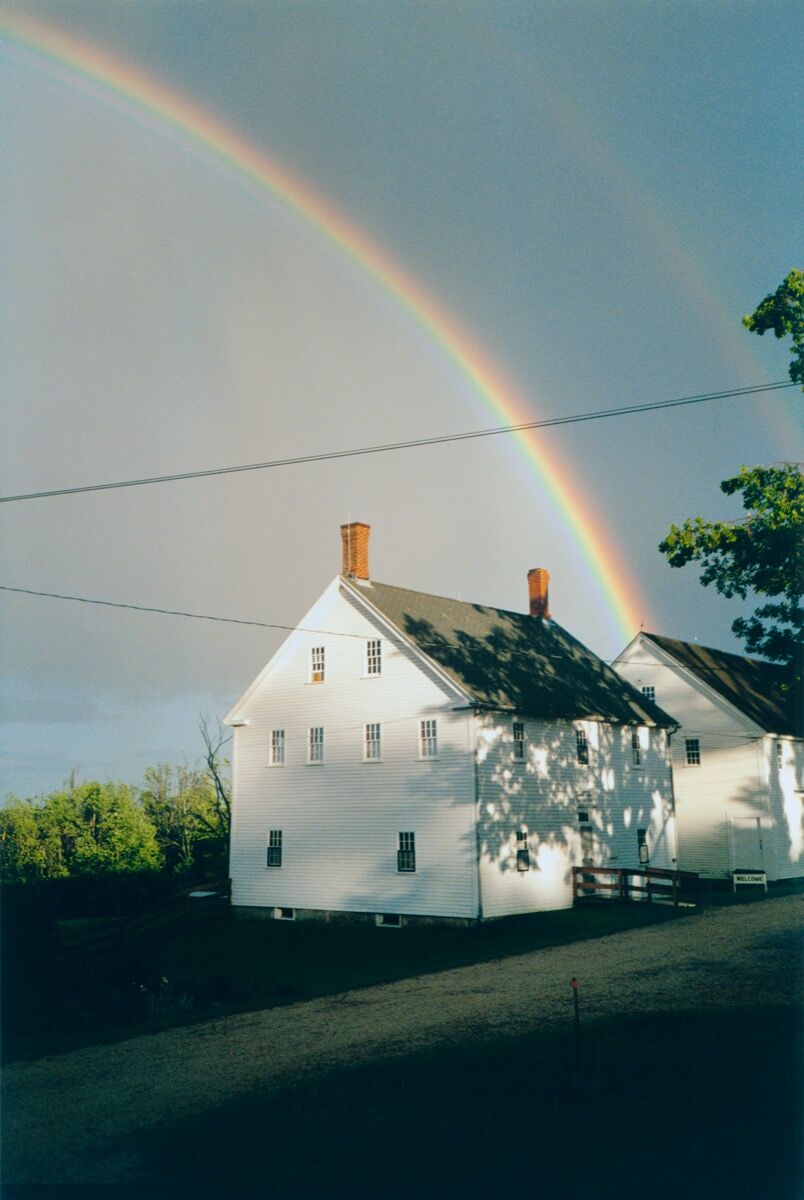 When photographer
Wolfgang Tillmans
was young, he loved the stars. At age 10, he found a book on astronomy nestled in his parents’ bookshelf, which sparked a zealous appetite for observing what lay beyond the Earth. He spent days and nights in his German hometown of Remscheid with his eyes turned toward the skies. “I wasn’t a particularly popular boy in school, and in the face of extreme loneliness of the universe, I felt somewhat held,” Tillmans said during a recent talk with Aperture editor Michael Famighetti. “A lot of people are scared by infinity, [but] it gave me something to hold onto.”
When Famighetti recently invited Tillmans to guest edit the winter 2019 issue of Aperture, the photographer chose the theme of spirituality as the basis for the collected photo stories and texts. “I immediately knew that it should be spirituality because I strongly sense that the political shifts in Western society in the last ten years stem from…a lack of meaning in the capitalist world,” he wrote in the issue. 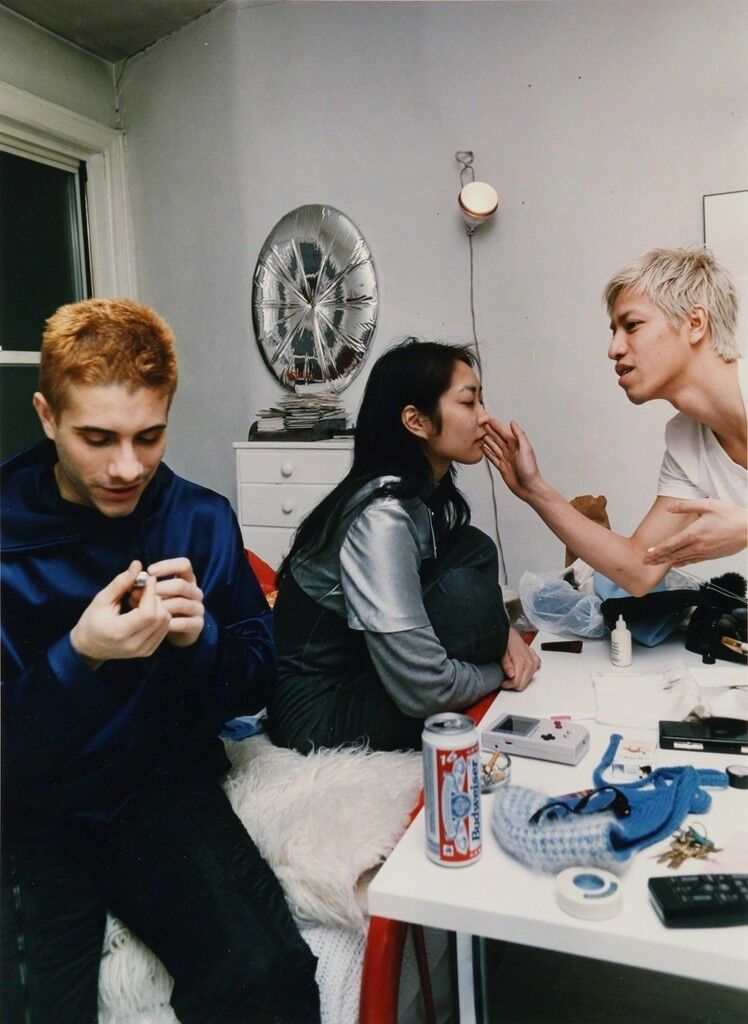 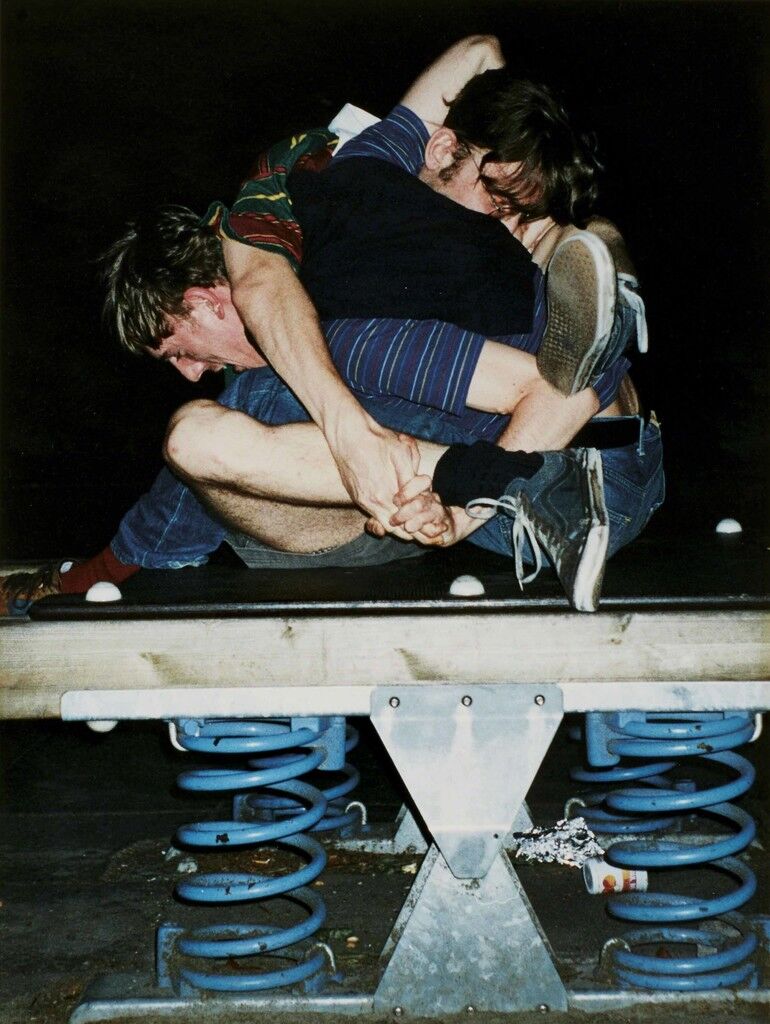 Wolfgang Tillmans
Knotenmutter, 1994
Christie's
Tillmans has been outspoken about his qualms with organized religion, so his focus on spirituality may seem surprising. Yet his early fascination with astronomy, along with his deep love for club culture and queer kinship, shaped his secular approach to the subject. In his own photography, Tillmans embraces diverse subjects that often reflect very earthly concerns: rave subcultures, sexuality, and the mundane. Tillmans defines spirituality not by what murky afterlife may await us, but by how we form connections with each other while we are still here.
I see veneration for the spiritual in Tillmans’s photographs of Hamburg dance floors from the late 1980s, when music brought a sense of unity to a still-divided Germany. A timeless feeling of belonging and surrender pervades the seas of bodies that Tillmans captured; it’s the same feeling I return to each weekend in Brooklyn in lieu of church.
When Tillmans moved to Hamburg in the late 1980s, he was introduced to acid house parties, which would eventually become his first focus in photography. “I felt a great desire to talk about this sense of community and togetherness that I experienced there—these bodies in motion, yet in contemplation, on the dance floor,” he told Famighetti. 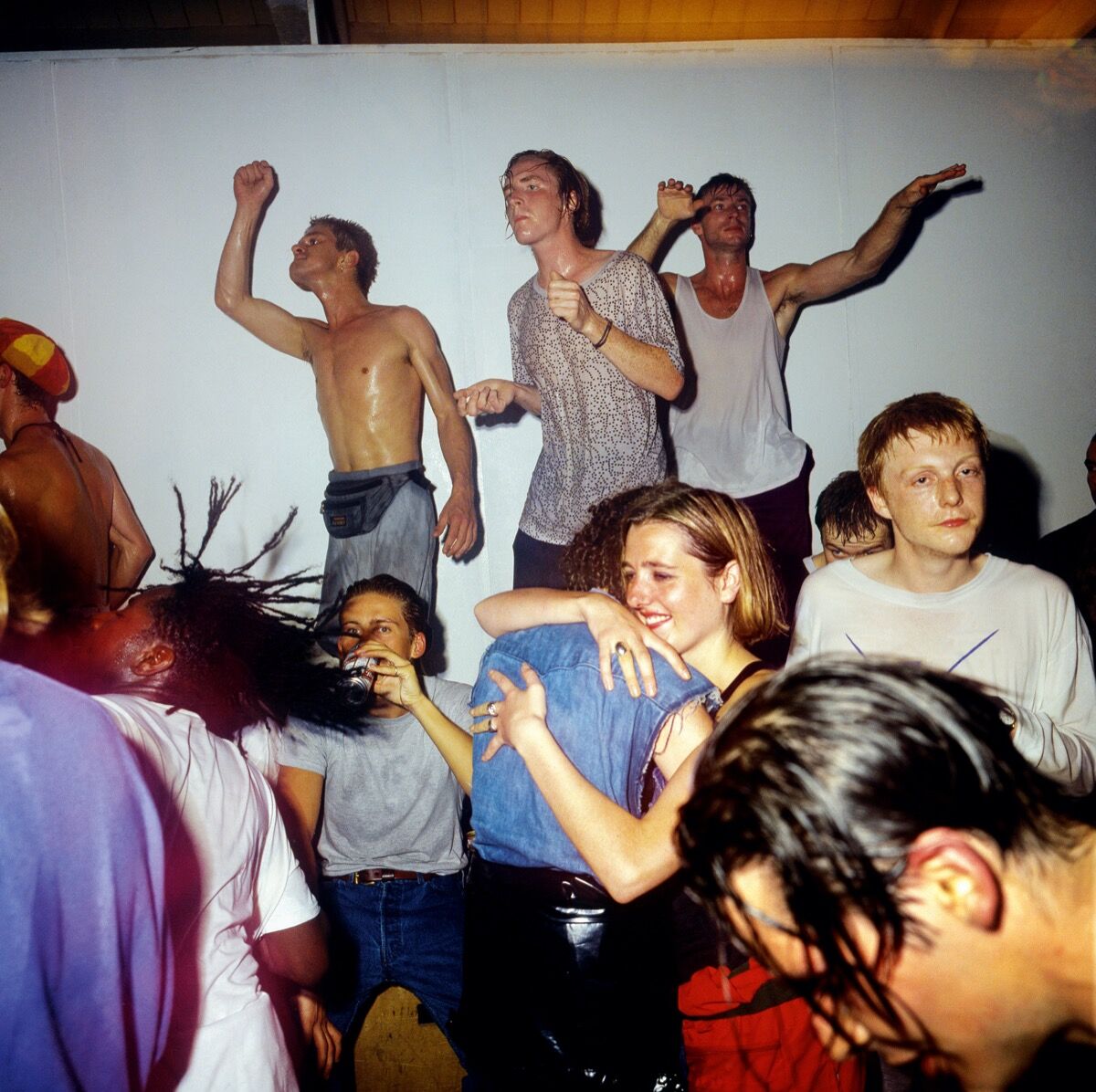 Dave Swindells, Pendragon at the Fridge, Brixton, 2000. Courtesy of the artist.

Advertisement
For the Aperture issue, Tillmans curated a selection of work that, at first glance, seems disparate. He included protest photographs from Hong Kong, Standing Rock, Black Lives Matter gatherings, and the Women’s March. He chose work by the recently deceased
Santu Mofokeng
, who accompanied his dying brother on an arduous journey in their native South Africa to seek spiritual healing in a cave. In lieu of Tillmans’s own ritualistic nightlife images, he included those of Dave Swindells, who has documented the energy of British rave culture for over three decades. Tillmans wove his own work in, too, including a photograph from his mid-’90s series on a Shaker village in Maine, which sought idealistic, spiritual living through shared responsibility.
Ultimately, through the issue, Tillmans attempted to capture an ineffable feeling: the human desire to find meaning beyond ourselves. “Tillmans poses the questions: How is human connection a form of spiritual engagement?” wrote Famighetti in the editor’s note. “And what is the relationship between spirituality and solidarity?” In Tillmans’s view, spirituality isn’t meant to improve one’s sense of self, but to strengthen our bonds with others. 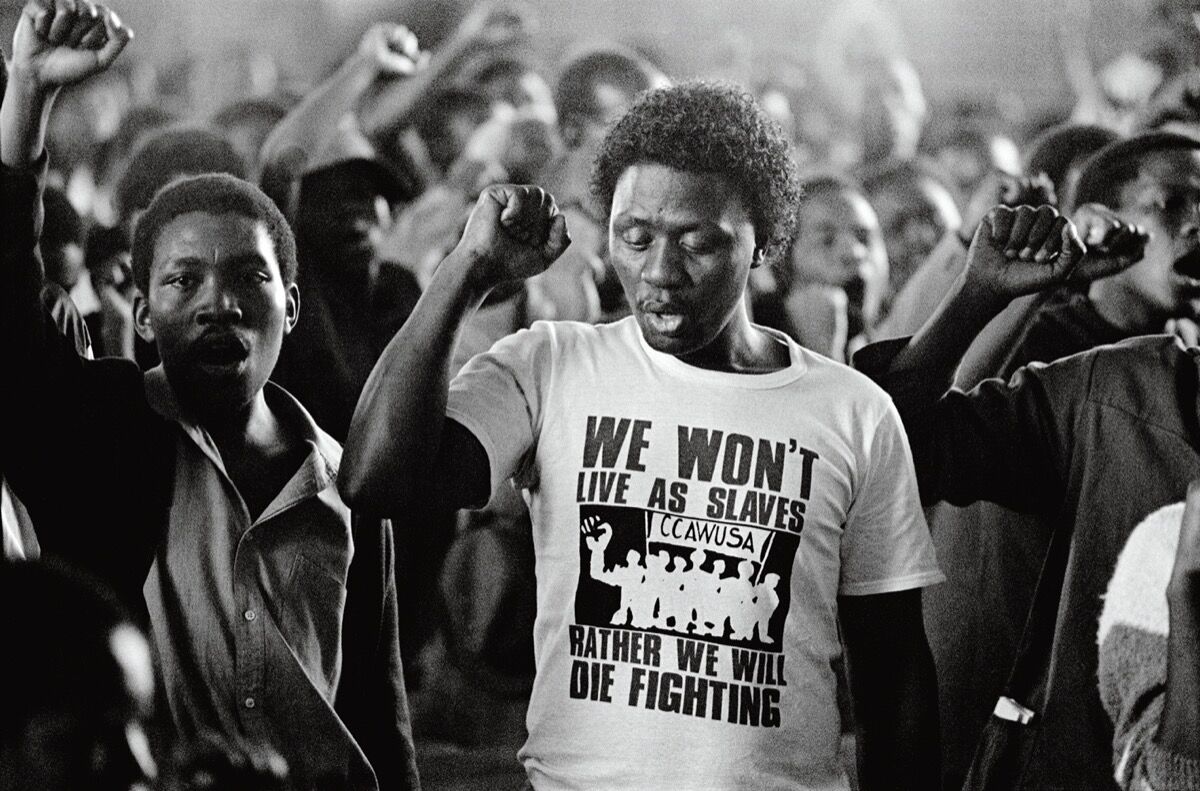 Tillmans’s understanding of spirituality also hinges on the concept of fragility, which stems from his interest in the work of philosopher Martin Hägglund, whom the artist interviewed for the issue. “Secular faith will always be precarious,” Hägglund once wrote, “but in its fragility it opens the possibility for our spiritual freedom.” To accept the finiteness of life is to accept one’s own fragility, as well. Fragility also appeals to the artist in its relationship to his medium of choice: Photographic prints begin to degrade as soon as they are printed.
One image in the issue represents togetherness and fragility at its most extreme. Last year, an international team of scientists completed a monumental feat: the first image of a black hole, taken in 2019. Back in 1968, humans were confronted with the first color photograph of Earth. 51 years later, we were again shown our infinitesimal and precarious place in the universe. When astronauts leave Earth’s atmosphere and look at their home, they describe a unifying effect: Country borders no longer matter. Millions of people looking at the impossible grandeur of a supermassive black hole can have the same impact on our perception. 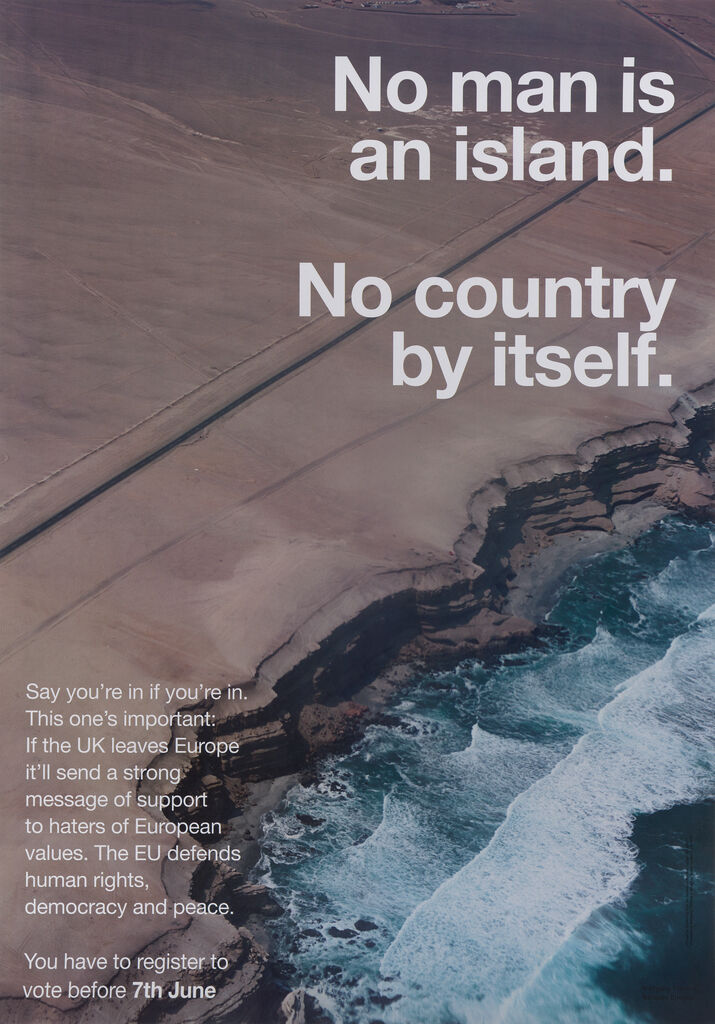 Wolfgang Tillmans
No Man Is an Island. No Country by Itself, 2016
San Francisco Museum of Modern Art (SFMOMA) 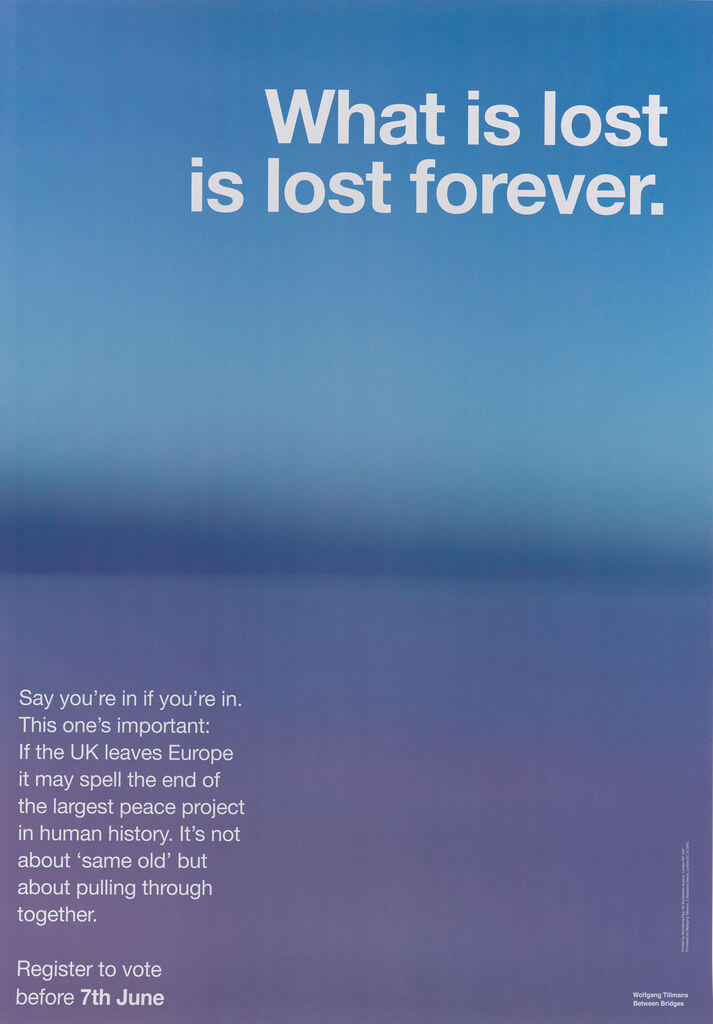 Wolfgang Tillmans
What Is Lost Is Lost Forever, 2016
San Francisco Museum of Modern Art (SFMOMA)
Tillmans, who has lived in London since the mid-1990s, sought a similar sense of unity as the threat of Brexit loomed. Having grown up in fractured Germany, he feels strongly about the illusory quality of borders. These concerns have led to activism. In his earlier body of work “On the Verge of Visibility” (2016), Tillmans explored the idea of boundaries by photographing the meeting places between color fields, sea and sky, day and night, and clouds and air. Tillmans revisited the series and printed his images on posters that urged voters to consider the serious implications of fragmenting the European Union. Upon approaching such nebulous boundaries as horizons, one discovers they do not actually exist. “No man is an island,” one poster declares. “No country by itself.”
This idea of unity, which Tillmans finds lacking in today’s world of political and religious extremes, shines throughout the issue. The artist excerpted a talk from the late Indian philosopher Jiddu Krishnamurti that holds great meaning for him: “I say [spirituality] is harmonious living,” Krishnamurti declared. “You cannot live harmoniously if you are a nationalist. How can you?…Or how can you live harmoniously when you are possessive, when there is that idea of mine and yours? Or how can you live intelligently, and therefore harmoniously, if you are bound by beliefs?”
Jacqui Palumbo is a contributing writer for Artsy Editorial.
Related Stories

6 AAPI Artists Reflect on the Spike in Anti-Asian Violence