How Wolfgang Tillmans Became a Visual Poet of Britain’s Left

Rosanna McLaughlin
Mar 3, 2017 4:46pm
When the press gathered at the opening of “Wolfgang Tillmans: 2017” at Tate Modern two weeks ago, one question came up repeatedly. Following his poster campaign encouraging British residents to vote remain in the European Union referendum known as Brexit, ought we to consider
Tillmans
’s practice in a political light?
The question was all the more germane given the gallery we were standing in. On one wall hung an enormous photograph of a stone-colored ocean, threatening to rise up into a wall; on another, the shipwrecked remains of refugee boats piled high on the beaches of the Italian island Lampedusa. 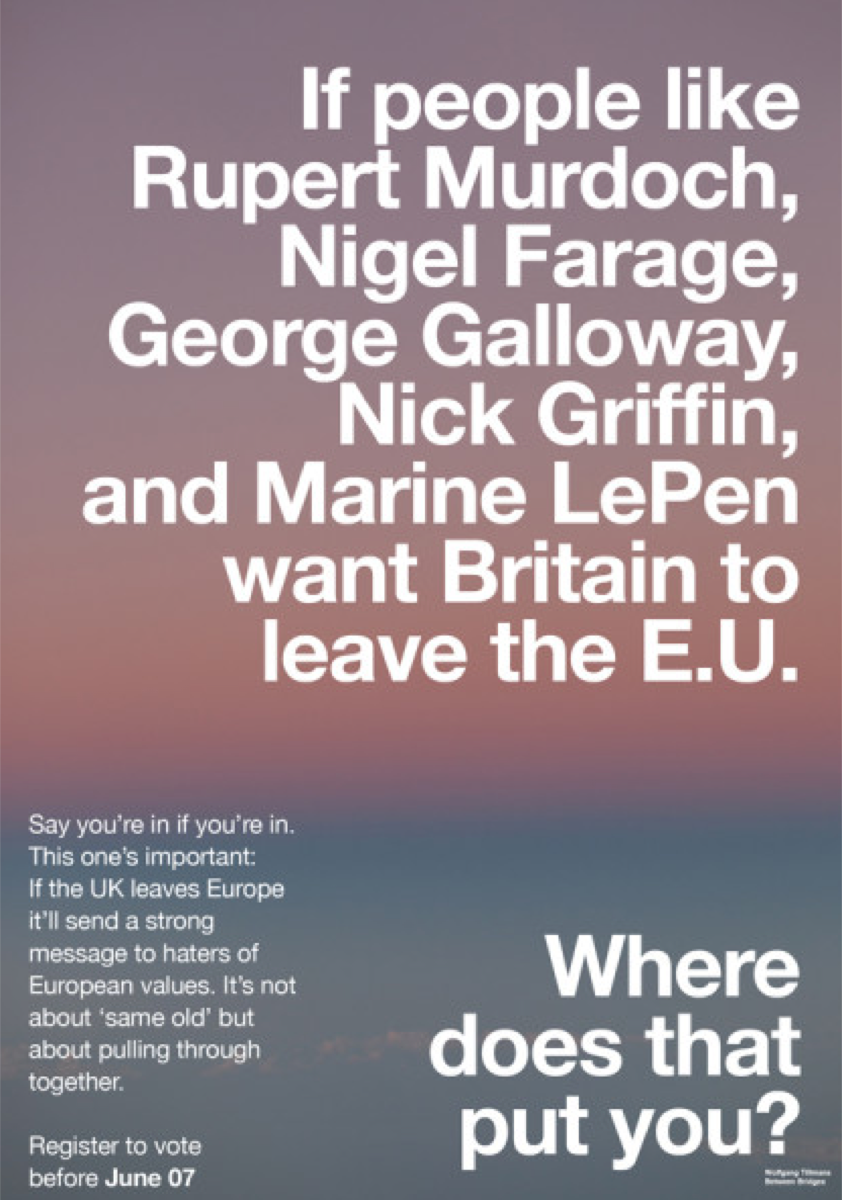 “The exhibition is not about politics,” Tillmans replied. “It’s just as much about poetry, installation.” He is right to be cautious of assuming the mantle of political artist. After all, his deeply personal aesthetic and often autobiographical works are a far cry from the protest performances of Pussy Riot, or the AIDS activism of Gran Fury.
Despite his reservations, however, Tillmans has a lengthy record of using his artistic eye, and his status, to highlight issues of social importance. And in a political climate dominated by simplistic and divisive rhetoric, his nuanced and ethical perspective is a welcome voice.
Tillmans belongs to a generation of European artists whose careers have flourished during a time of free movement between EU member states. Born in Germany, he made his breakthrough at British magazine i-D in the early 1990s, photographing the continental acid house scene.
He became the first non-Brit to win the Turner Prize in 2000, and in recent years, he has documented his unease at the resurgence of nationalism, which threatens to stymie precisely the sort of socially liberal, pan-European identity that characterizes his photography. He has also witnessed first-hand the harrowing impact of AIDS on the queer community (it took the life of his partner, Jochen Klein, in 1997). 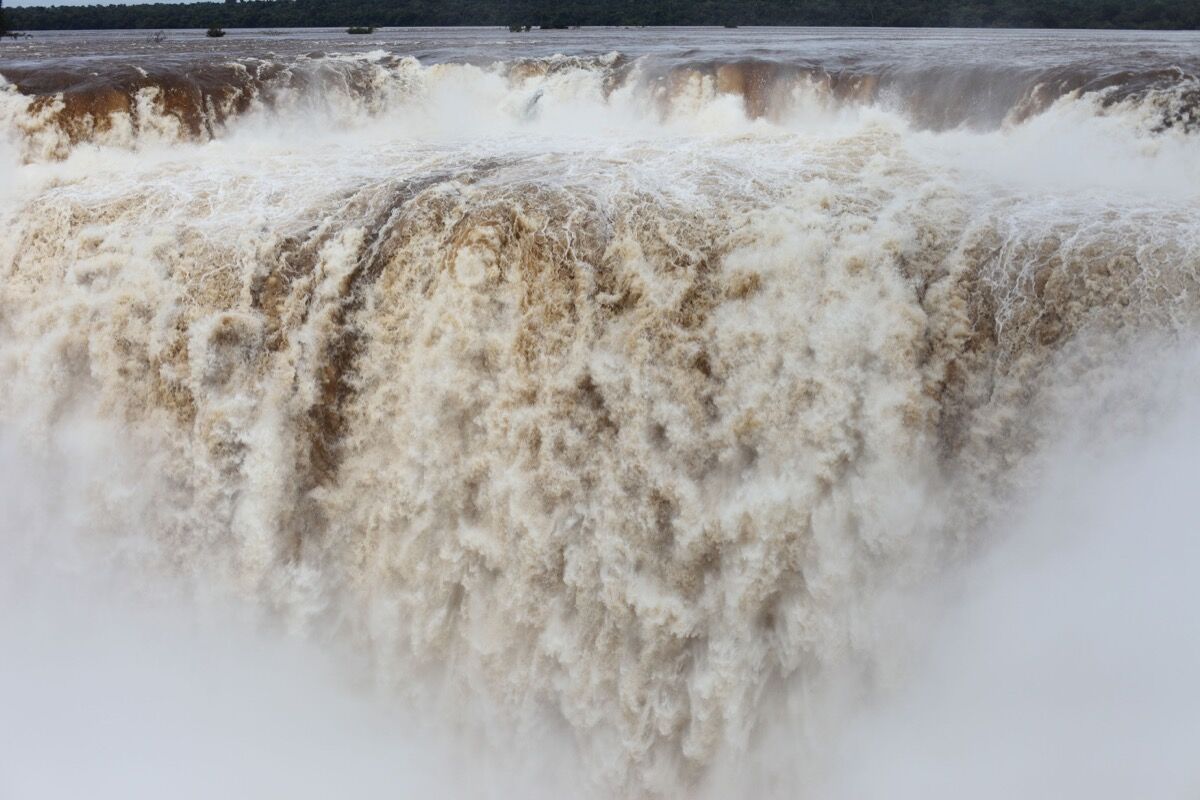 Advertisement
“I never thought the private and the political can be separated,” Tillmans went on to say at Tate Modern. And indeed the two themes are infused throughout “Wolfgang Tillmans: 2017,” where you are as likely to see intimate portraits of friends or a box containing a 17-year supply of prescription HIV drugs, some made out in Tillmans’s name, as you are ominous meditations on the nature of national borders.
Tillmans’s outspoken position on Britain’s EU referendum may be his most high-profile foray into political terrain, but it is by no means his first. In the same year that he won the Turner Prize, he guest-edited a photo edition of The Big Issue, a U.K. publication that helps people out of poverty. “Magazines like The Big Issue can cross borders between communities and classes,” he wrote in the editorial.
The same concern with unity can be seen in his art and social work today. Tillmans runs the non-profit project space Between Bridges, founded in London in 2006 and now operating in Berlin. Between April and June last year, he opened its doors as a meeting place for coordinating responses to the growing refugee crisis and countering the rise of xenophobia.
Since 2005, Tillmans has been working on truth study center, an attempt to chart the spread of misinformation for political ends and our propensity to believe it. The latest incarnation of the project is on display at Tate Modern: a sprawling archive of psychological studies and newspaper clippings concerned with a phenomenon now popularly referred to as “post-truth.”
In the early stages of a U.S. administration for which facts are synonymous with bald ideological expediency, Tillmans’s turn as a citizen researcher is arguably more pertinent than it ever has been. 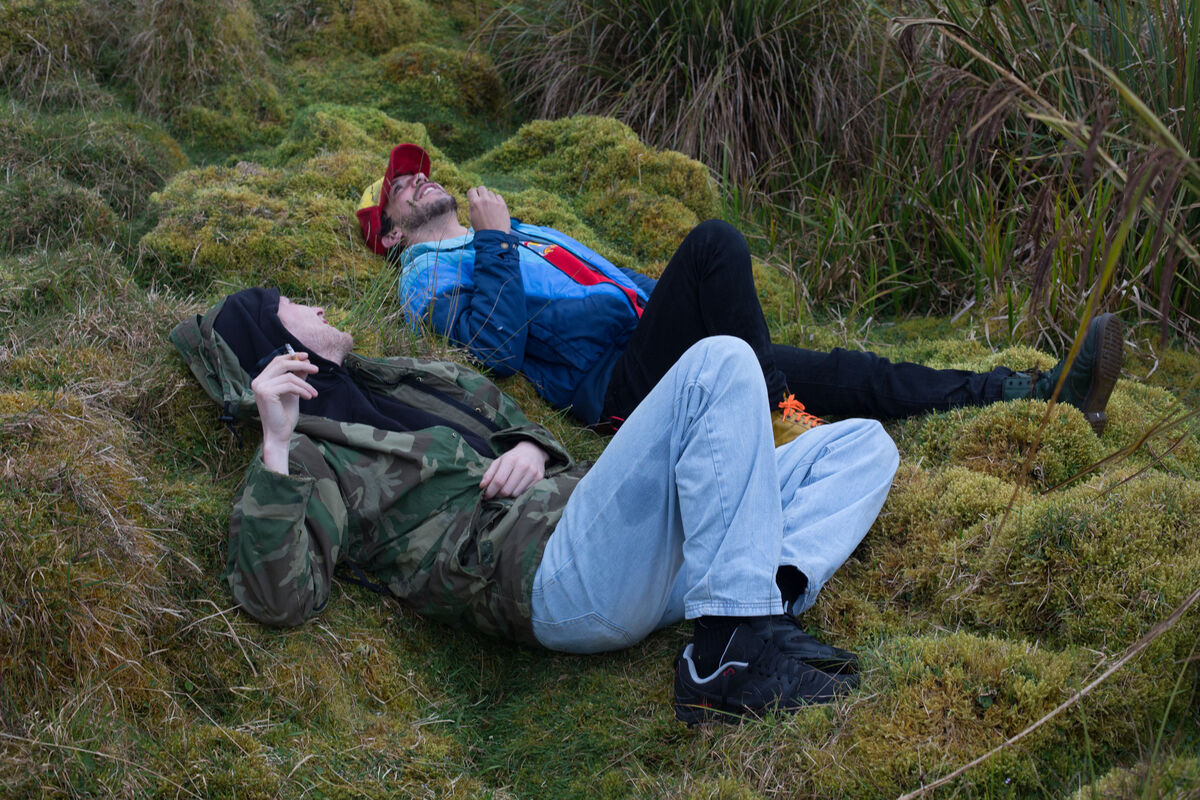 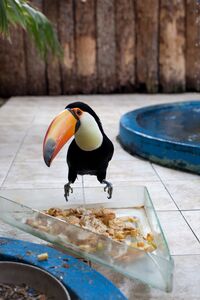 3 Images
View Slideshow
Over the years, Tillmans has been involved in numerous AIDS and HIV awareness-raising initiatives. In 2002, an AIDS memorial designed by Tillmans was unveiled in Munich. He modelled it on the blue, tiled columns in Sendlinger Tor station, an alighting point for the city’s gay and lesbian district.
An inscription on the column commemorates the extensive network of people affected: “AIDS/ den Toten/ den Infizierten/ ihren Freunden/ ihren Familien/ 1981 bis heute” (AIDS/ The dead/ The infected/ Their friends/ Their families/ 1981 to today).
Though his direct political engagement may seem poles apart from the subtle poetry of his better-known photography, the various aspects of Tillmans’s practice come together in his interest in community. It is a theme as prominent in the creation of public platforms and memorials as it is his approach to display.
Typical of his style, photographs in “Wolfgang Tillmans: 2017” are presented in associative groups, so that the affinities between them are fundamental to the way we view any single frame. In one room at the Tate Modern, an image of a dust-covered car on a roadside in Jeddah, Saudi Arabia, keeps company with a four-foot-tall photograph of a weed growing through the cracks in Tillmans’s London garden.
Taken thousands of miles apart, they are united by an appreciation of fragility, and ideas of erosion, destruction, and regrowth—and are all the more affecting for the unexpectedness of their alliance. 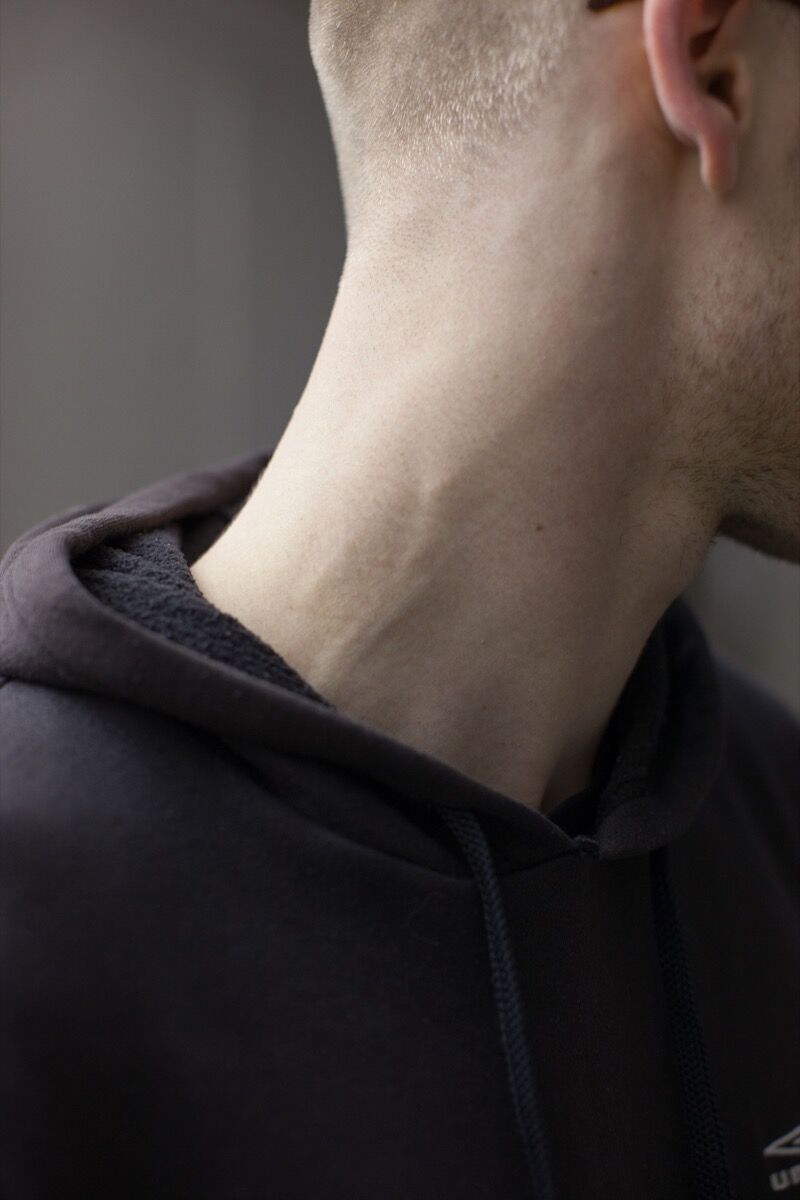 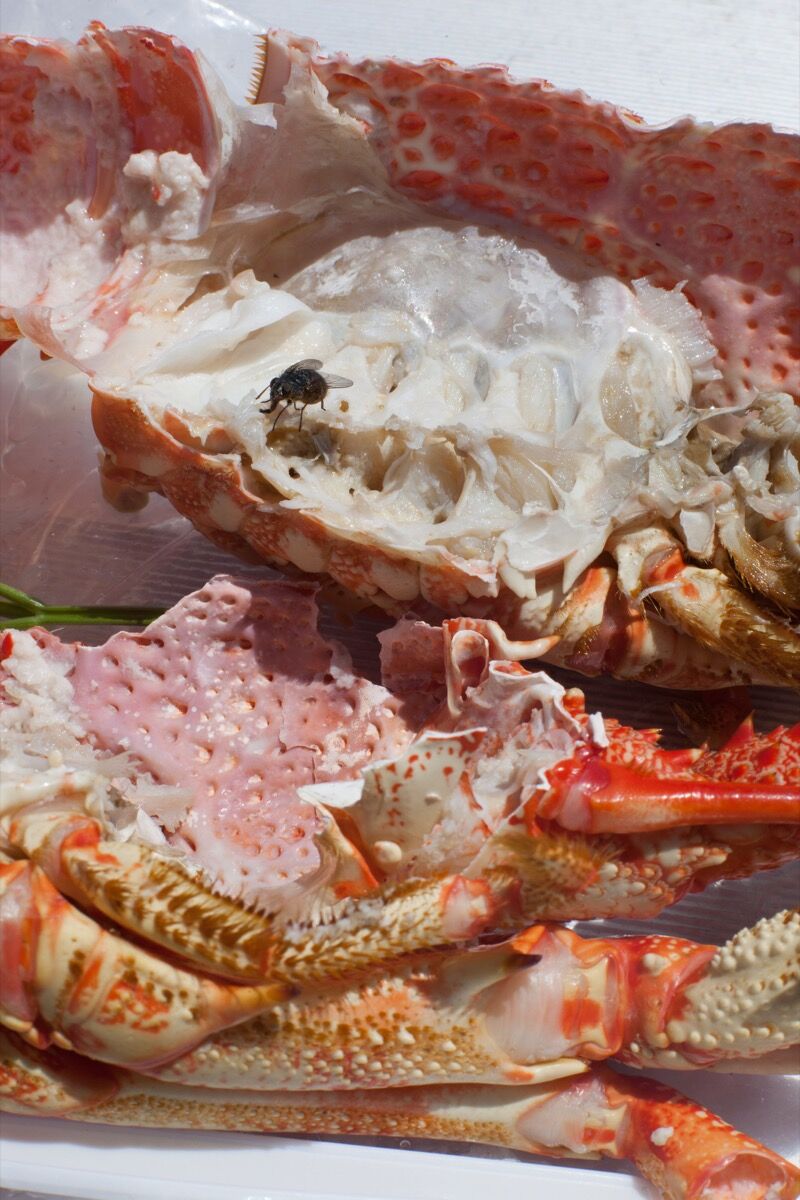 The care with which Tillmans treats his subjects has long enamored him to audiences, and continues to set him apart from many of his contemporaries. He rose to prominence at i-D in the company of
Juergen Teller
and
Terry Richardson
, two all-star photographers whose signature styles are defined by high exposure and a brash, candid aesthetic. (Richardson is also known for repeated accusations of having sexually harassed models.)
In contrast, one of Tillmans’s photographs is exemplary of the artist’s acute sensitivity. In Collum (2011), a young man’s neck is shown close-up, his veins visible through milk-white skin. It captures a sense of tenderness and wonder: a photograph created with an eye for what the camera can give, rather than what it can take.
Rosanna McLaughlin
Related Stories