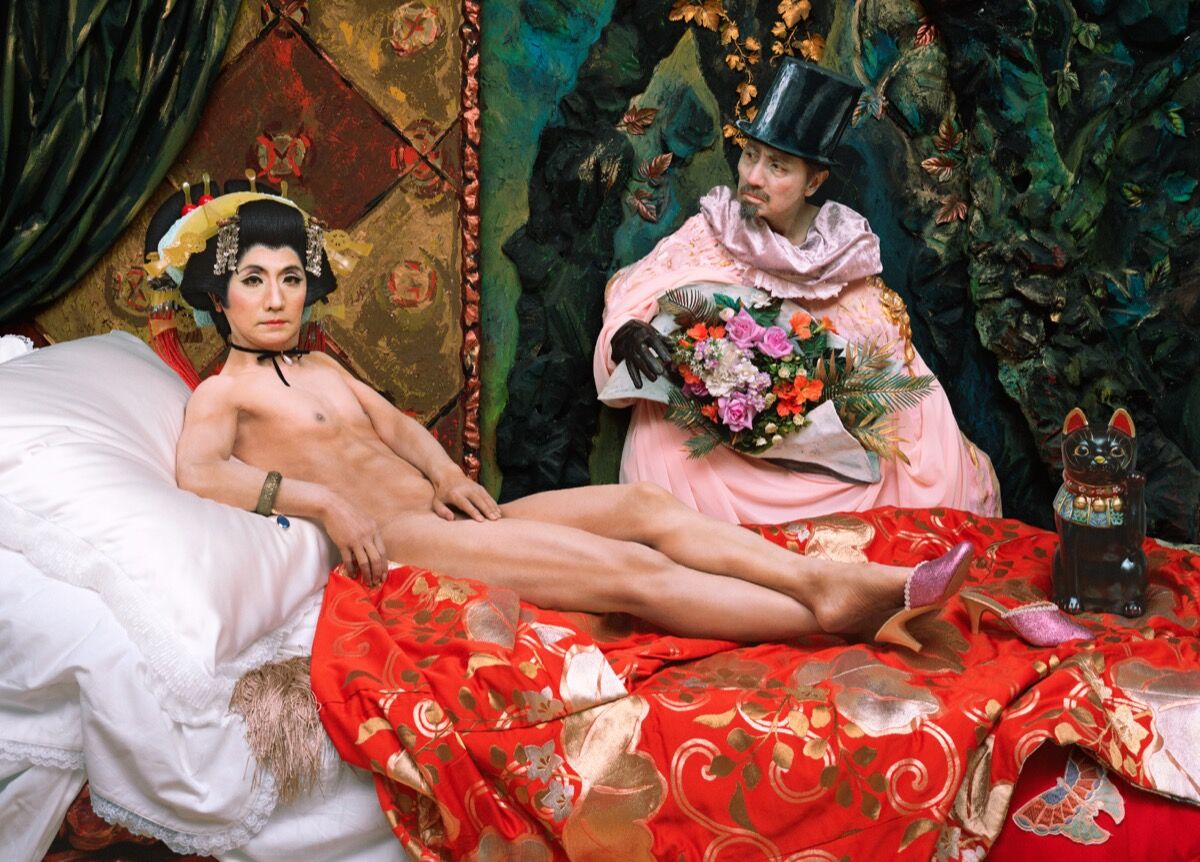 Yasumasa Morimura
is a fan of role-play—in fact, one could say it’s his primary medium. Since the mid-1980s, the Japanese conceptual photographer has transformed his own body to resemble creative geniuses, megastars, and revolutionaries as wide-ranging as
Vincent van Gogh
, Marilyn Monroe, and Che Guevara. He’s also impersonated the subjects of art history’s famous paintings: He plays the reclining prostitute in
Édouard Manet
’s Olympia (1863), as well as the smiling female victor and the gruesomely severed head in
Lucas Cranach the Elder
’s Judith with the Head of Holofernes (ca. 1530).
While Morimura has described his practice as “wearable painting” or “wearing Western art history,” it’s not a superficial act: He fuses the identity and concerns of his subjects with his own. “To put it simply, I feel Dürer in myself and myself in Dürer,” he explained, in a recent interview with the Japan Society, of his 2016 recreation of a self-portrait by
Albrecht Dürer
, painted in 1500.
In the process, Morimura not only probes his own identity as an artist and Japanese man, but also broader themes of cultural, political, and national selfhood: in particular, the increasingly blurred lines between East and West. The scope of his 30-year investigation is currently on full, mesmerizing view at the Japan Society in “Ego Obscura,” the 67-year-old, Osaka-based artist’s first solo show at a New York institution. 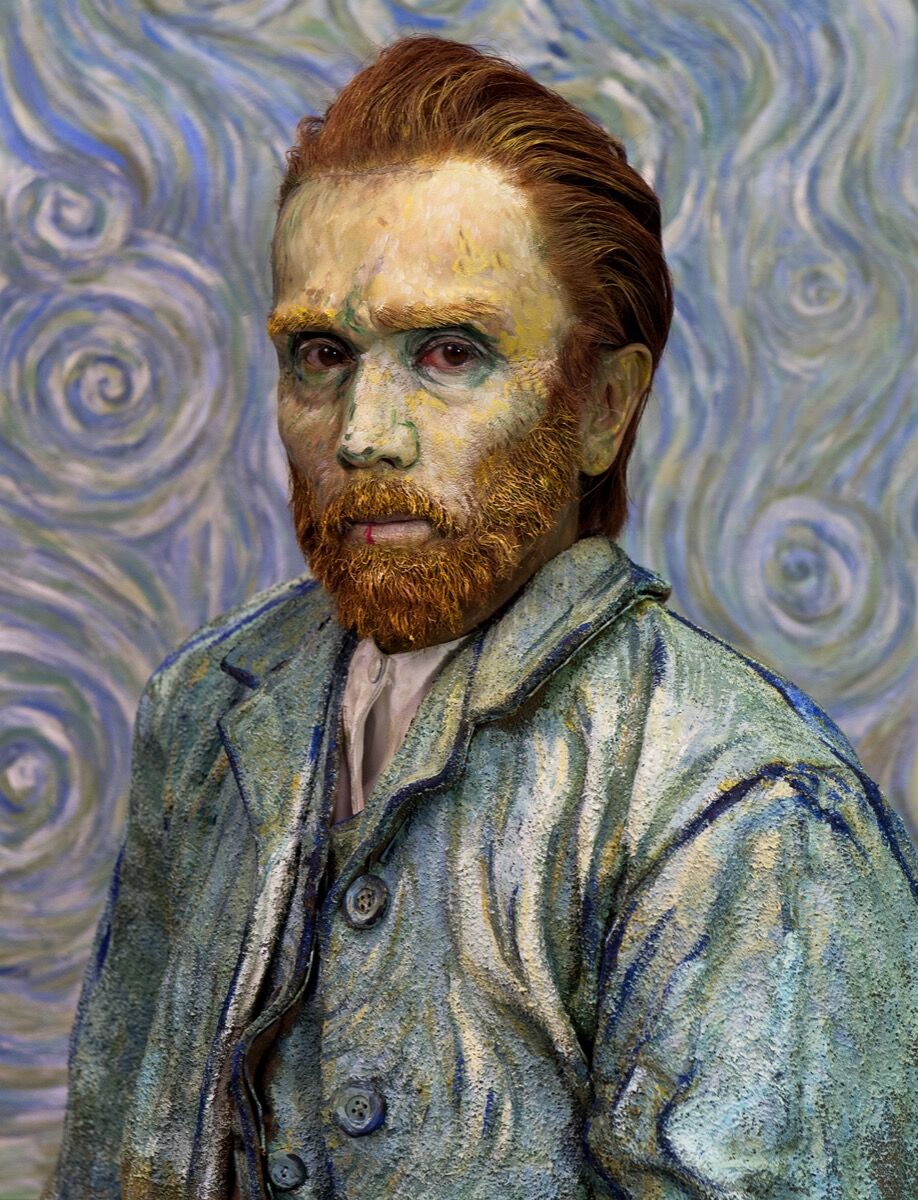 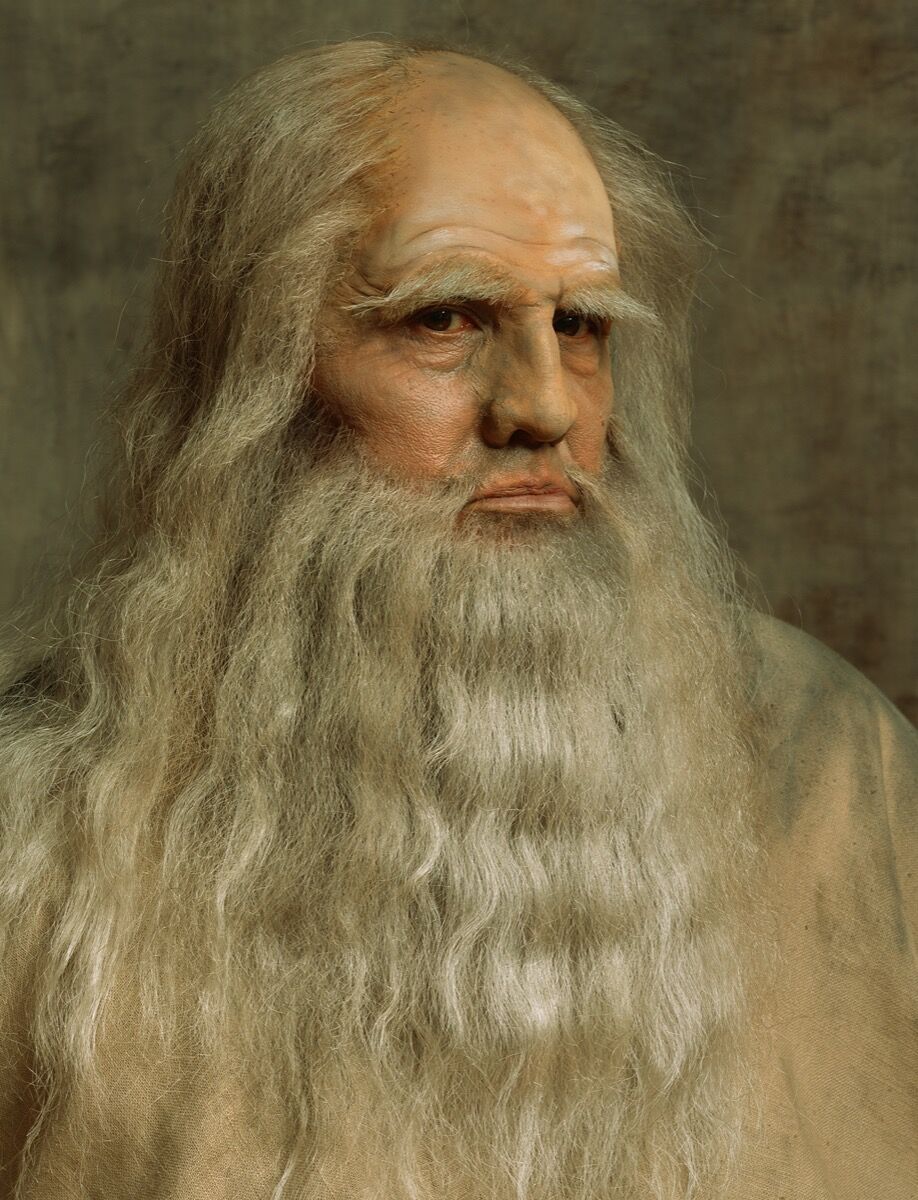 Morimura made his first art-historical self portrait in 1985, when he was in his mid-thirties. His chosen subject was Van Gogh, an artist who, in retrospect, represented numerous themes Morimura would reflect upon over the course of his career.
At the time, Western art was en vogue in Japan. Morimura was born the same year World War II officially came to a close with the San Francisco Peace Treaty, in 1951; in the following years, Japanese citizens buried their own cultural traditions—considered “a trigger of war,” according to Morimura—in favor of their Western counterparts. By the 1980s, Van Gogh, in particular, was idolized by the Japanese as a creative lodestar and an investment opportunity. (In 1987, a Japanese company snapped up the Dutch artist’s Sunflowers, 1888, at auction for a whopping $39.8 million.)
For his part, Morimura was spellbound by the
Post-Impressionist
’s 1889 Self-Portrait with Bandaged Ear and Pipe, which shows Van Gogh in clear anguish, having recently chopped off his own ear in a fit of artistic insecurity and depression. Morimura’s recreation is almost identical, achieved through expertly applied makeup and staging. Set against a bright-red backdrop, his face glows with the same sickly pinkish-white hue as the Dutch artist, and he, too, poses with a burning pipe in layers of bandages and thick, fuzzy clothing. Indeed, Morimura looks like a painting—expect for his eyes, which contain a red-blooded, mischievous glimmer that Van Gogh’s self-portrait did not. 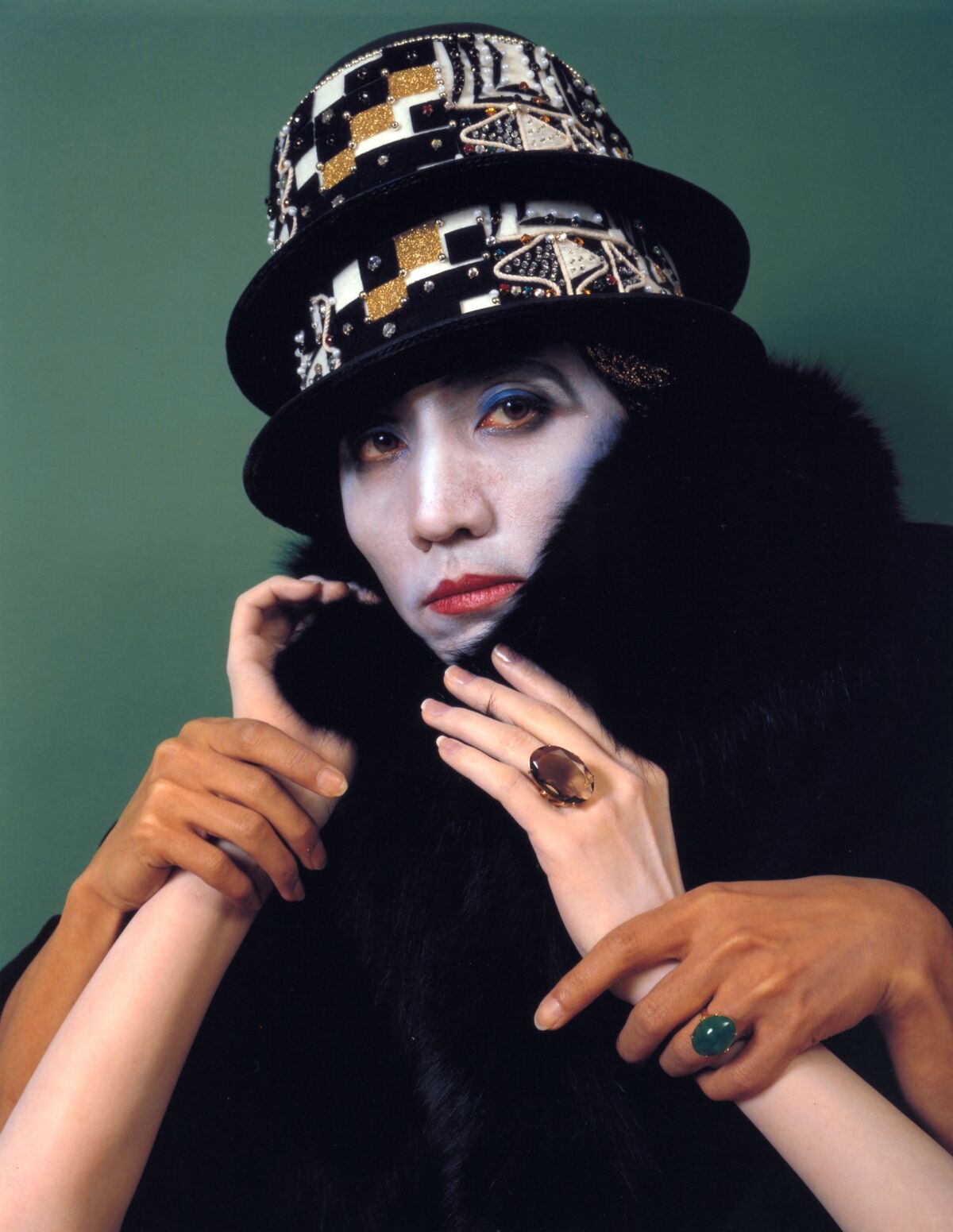 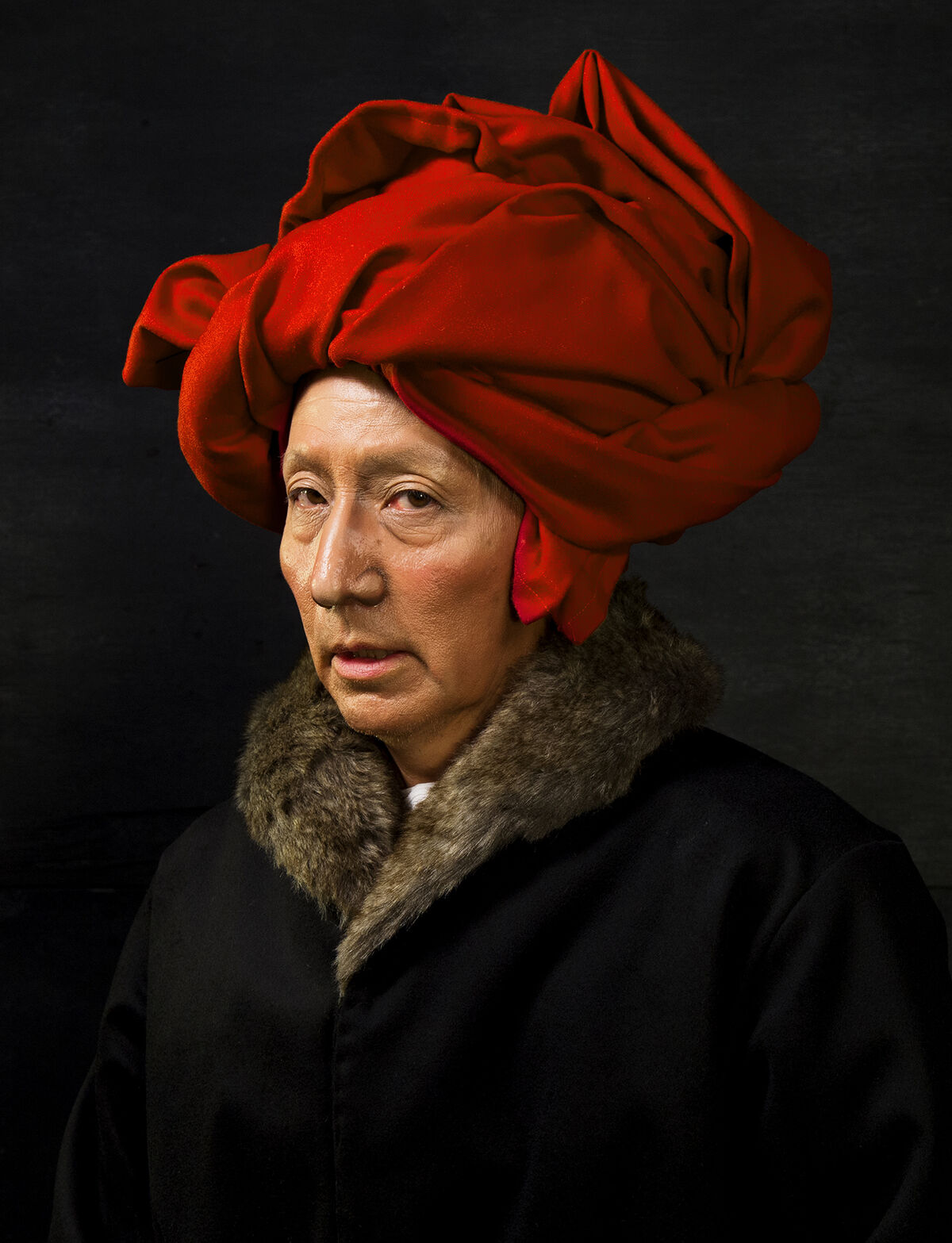 Advertisement
The experience of looking at the two images side by side is initially pure fun, like a kid’s game of “spot the differences.” A quote from Morimura comes to mind: “Art is basically entertainment. Even
Michelangelo
and
Leonardo da Vinci
were entertainers,” he noted. “In that way, I am an entertainer and want to make art that is fun.” But a longer look offers much more than a visual lark. In fact, the differences between the two canvases aren’t so much funny or charming as jarring: Morimura’s lively eyes look as if they’re imprisoned behind a stifling mask of Van Gogh’s face, obscuring Morimura’s Japanese identity.
For Morimura, this dissonance isn’t only intentional, but essential to his photographs, which he’s described as a “picture of things gone amiss.” He explained further in a 1990 issue of ARTnews: “East meets West in my work, but I haven’t made an attempt to merge the two worlds. They exist in opposition.”
Indeed, Morimura’s restagings are full of spellbinding and downright loaded juxtapositions. Take his 1988 recreation of Manet’s celebrated painting The Fifer (1866), which, like Olympia, highlights the Western world’s exoticization, infantilization, and oppression of Eastern cultures. As Norman Bryson pointed out in his 1995 essay “Morimura: 3 Readings,” in a triptych of three photos responding to The Fifer, Morimura replaces “body of the colonizer with the bodies of the colonized” by depicting the young French soldier as either Asian or black; troublesomely, his characters have their pants around their ankles in two of the three images. 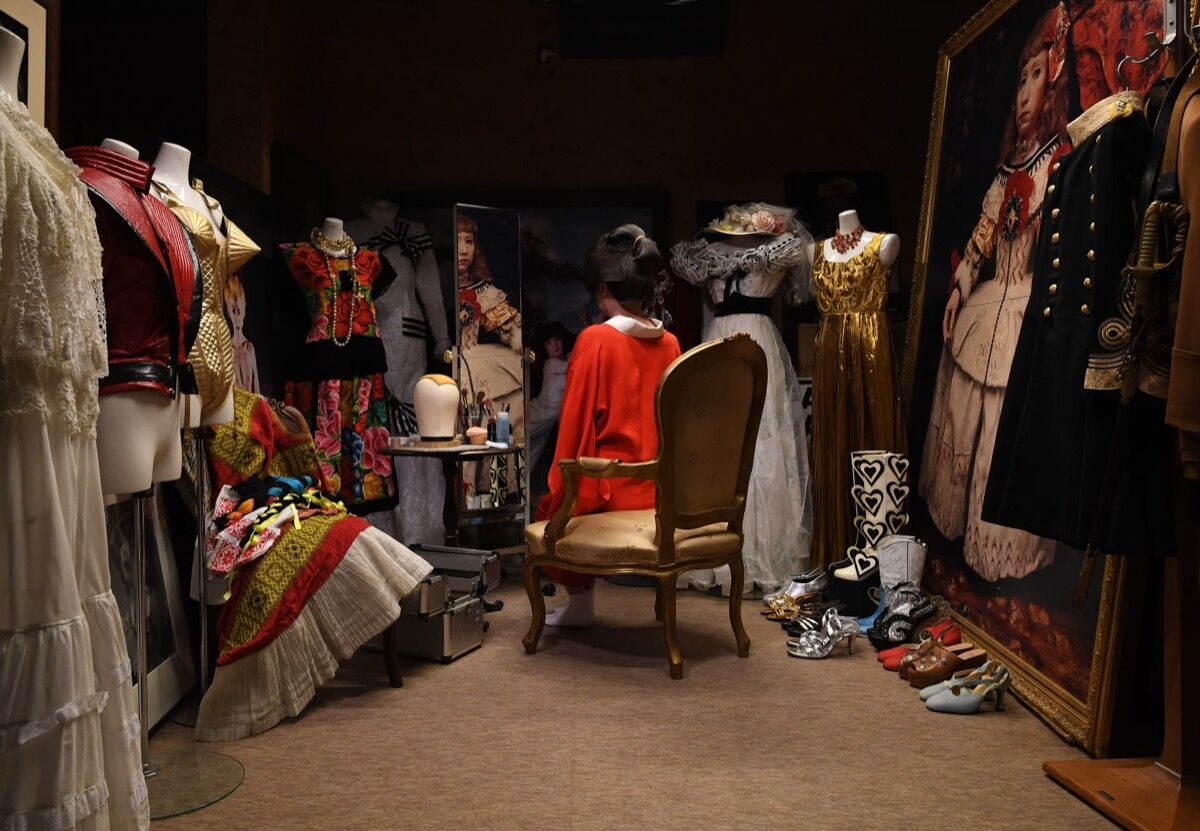 In Portrait (Futago) (1988), his restaging of Olympia, Morimura plays the role of both the young, supine prostitute and the black maid who attends to her. Here, he addresses Western stereotypes of Eastern art and culture by using his Asian male body to play the role of Manet’s female subjects, while also replacing the decor with objects related to Japanese culture and commerce. He lies on a kimono instead of European-made fabrics, and swaps Manet’s cat with a maneki-neko, a traditional Japanese cat figure that usually sits atop shop counters, promising luck and financial success. As Bryson suggested, these inclusions could be read as an allusion to the Western “geisha” stereotype: “the figuration of Japan-as-woman,” or a country easily preyed upon and infantilized, like the young prostitute in Manet’s canvas. In other words, Morimura replaces the predatory “male gaze” with the Western gaze.
But like all of Morimura’s photographs, these works aren’t purely critical; they reference both a resistance to and reverence of Western culture. He’s described his oeuvre as a “psychological portrait of myself, having been strongly influenced by Western culture, despite having been born and raised as a Japanese man.” And when Japan’s traditions do seem subsumed or oppressively masked by Western culture in his work, he doesn’t make clear who—if anyone—is at fault.
Indeed, the artist prides himself in resisting essentialism and insists that he doesn’t take sides. After finishing a 2010 series of self-portraits based on photos of famed revolutionaries from Guevara to Lenin, he remembers being asked how he felt about their politics. “I don’t really have a good answer except to say that I’m on both sides,” he responded. “It’s not as simple as picking sides.” 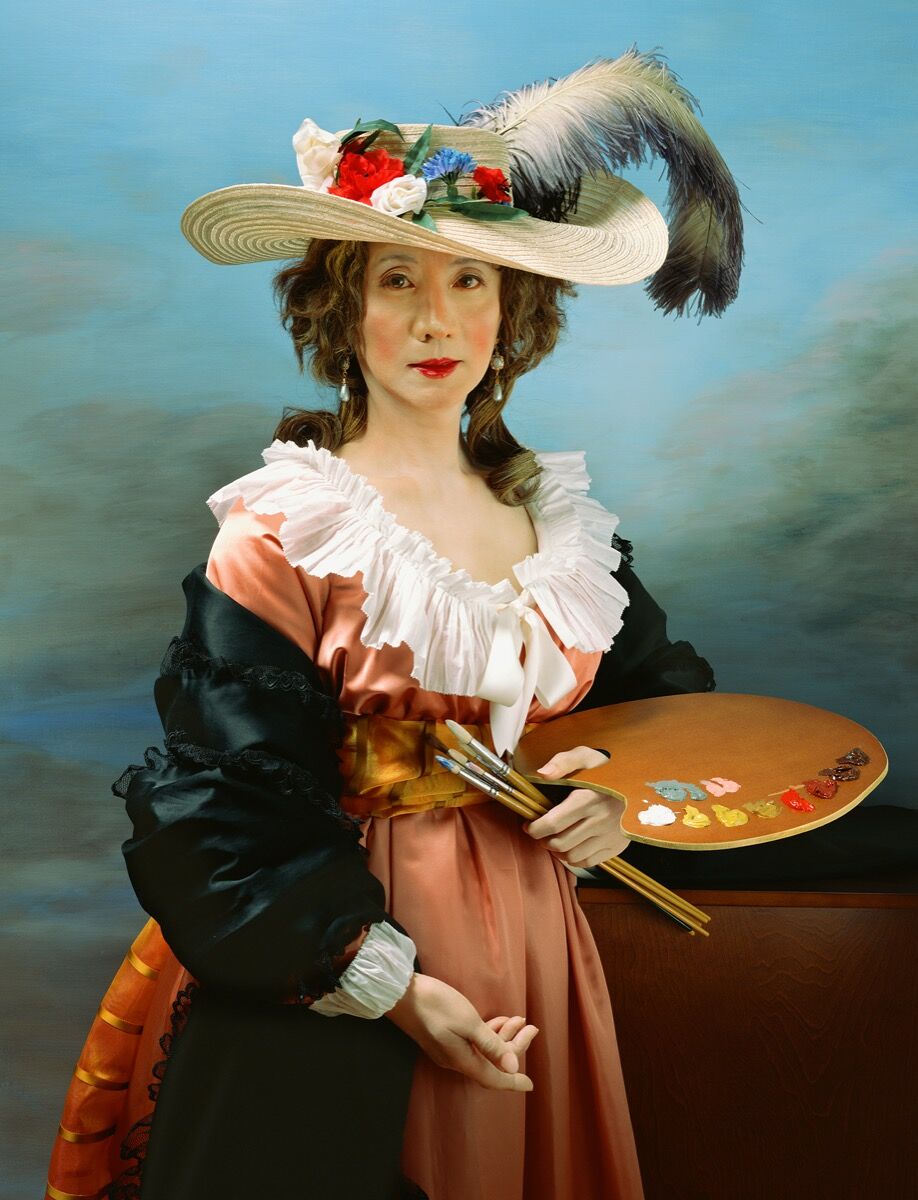 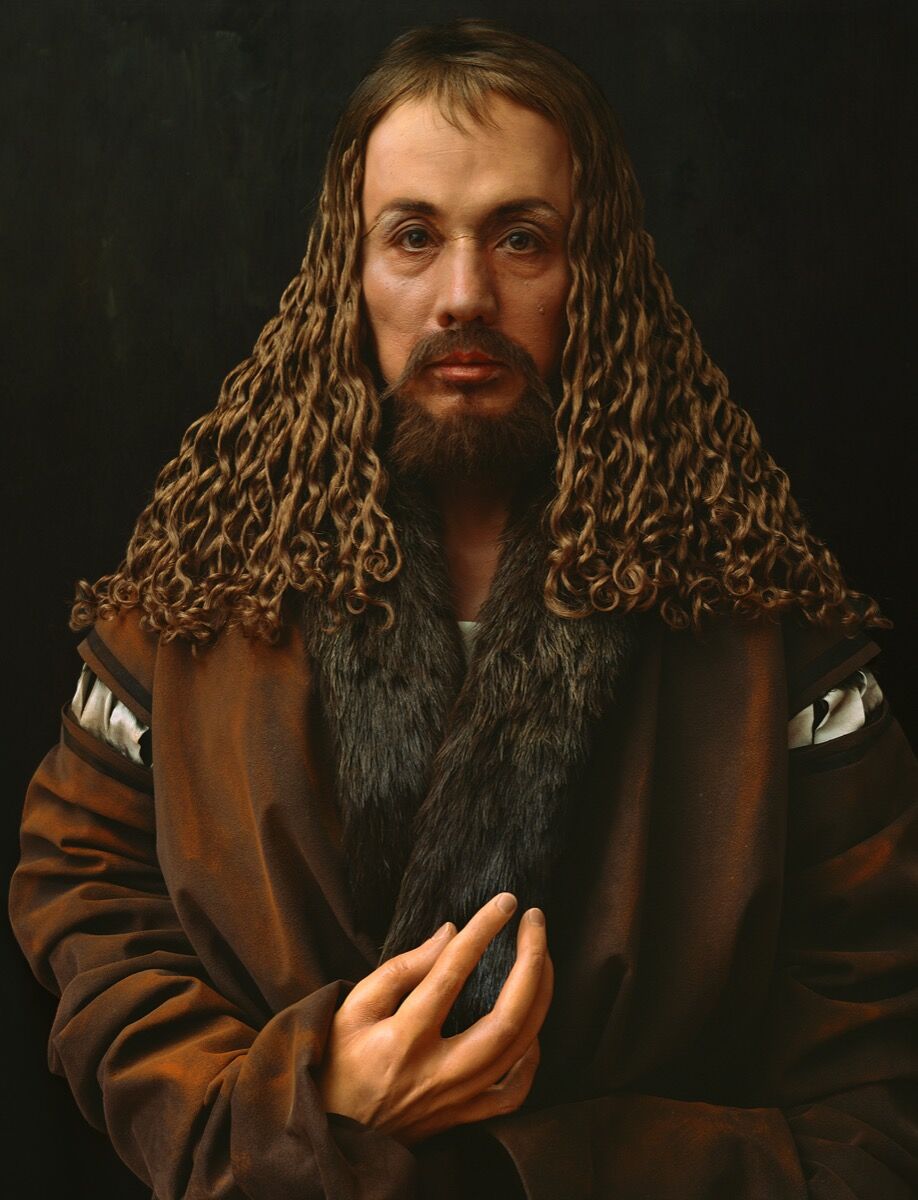 He likes to describe the process of filling his work with dualities as “wavering”—a luxury somewhat unique to artists. “Maybe there are times when you have to pick sides, but even as you’re going through that process, you’re wavering between the two extremes, and that feels more real to me,” he said in a 2010 interview. “I believe art is what is able to express that reality.”
It’s not easy to pin a single meaning to Morimura’s self-portraits. But if his work has any overarching message, it’s that identity is multivalent, constantly shifting, and the sum of many forces: cultural, political, and personal.
Nowhere is this more clear than in Morimura’s 2016 film Ego Symposion, in which he brings together 12 of the artists he’s impersonated over the course of his career in a single work. Here, however, he recreates their most iconic self-portraits; we see
Andy Warhol
with his silver wig and sunglasses,
Frida Kahlo
with her unibrow and hairpiece, and
Diego Velázquez
with his large moustache, among others. In the opening scene, they all sit together at a single dinner table, à la Leonardo’s Last Supper (1495–98). Of course, they all look eerily similar; underneath the elaborate makeup is Morimura himself—an individual made of many influences.
Alexxa Gotthardt
Correction: A previous version of this article referred to Morimura’s 2016 film as Ego Symposium. The film is called Ego Symposion. The text has been updated to reflect this change.
Related Stories