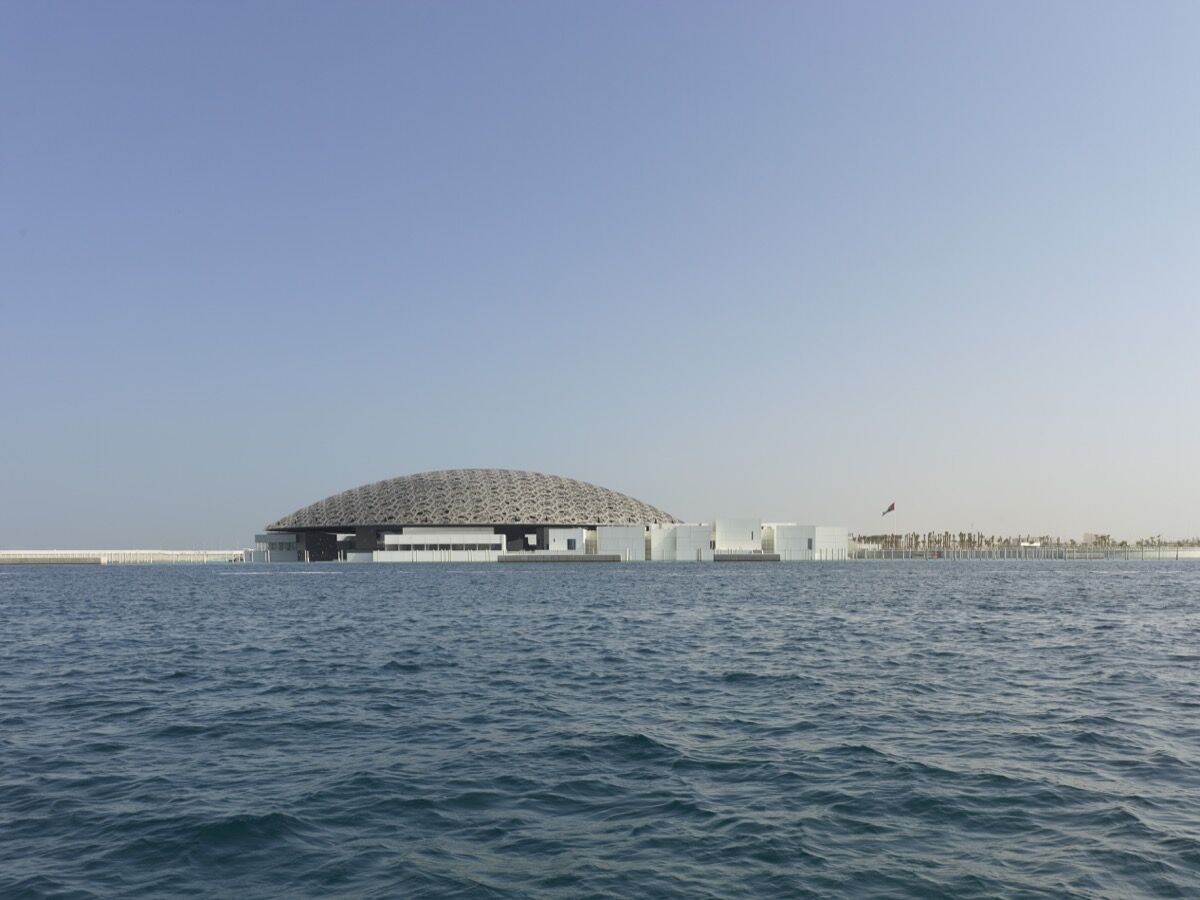 After a five-year delay, the Louvre Abu Dhabi will finally open its doors to the public on November 11th. The day will be a milestone for a French-Emirati partnership that hasn’t always been popular in France—and has been marred by criticism of its workers’ conditions. At the press conference earlier this week, Mohamed Khalifa Al Mubarak, chairman of Abu Dhabi’s Tourism & Culture Authority and of the Tourism Development and Investment Company (TDIC), was keen to put all this behind. He celebrated an institution that will be, he said, a “hub of tolerance,” and congratulated “genius” French architect
Jean Nouvel
.
Nouvel is a veteran builder of cultural organizations, and the Louvre Abu Dhabi might well be his most accomplished building to date. Conceived like an Arab city, it gathers 55 white blocks topped by a metal lattice dome 590 feet in diameter. The United Arab Emirates’ newest museum is both spectacular and unassuming. From the outside, the dome looks like a fairly modest cupola. It only fully reveals its splendor once seen from underneath.
Weighing as much as the Eiffel Tower, this soon-to-be-iconic central dome is attached to four “invisible” points and appears to float above the central low-rise buildings, acting as an umbrella to protect the museum from the Gulf’s scorching heat. Its structure is camouflaged by eight perforated layers, which compose geometric patterns redolent of Islamic art. The sun flooding through creates what the architect calls a “rain of light,” dappling the cubes below and the pools of water that completely surround the building.
“I’m a contextual architect,” said Nouvel. “I imagined the Louvre Abu Dhabi as a neighborhood, as an Arab agora,” he continued, enthusiastically comparing the museum’s shadows to the sun shining through the palms of an oasis. The museum gardens, though, are yet to be completed. The current landscaping is temporary, and will remain in place for a few years “until Sheikh Zayed’s budget is ready,” quipped Nouvel during the press conference. 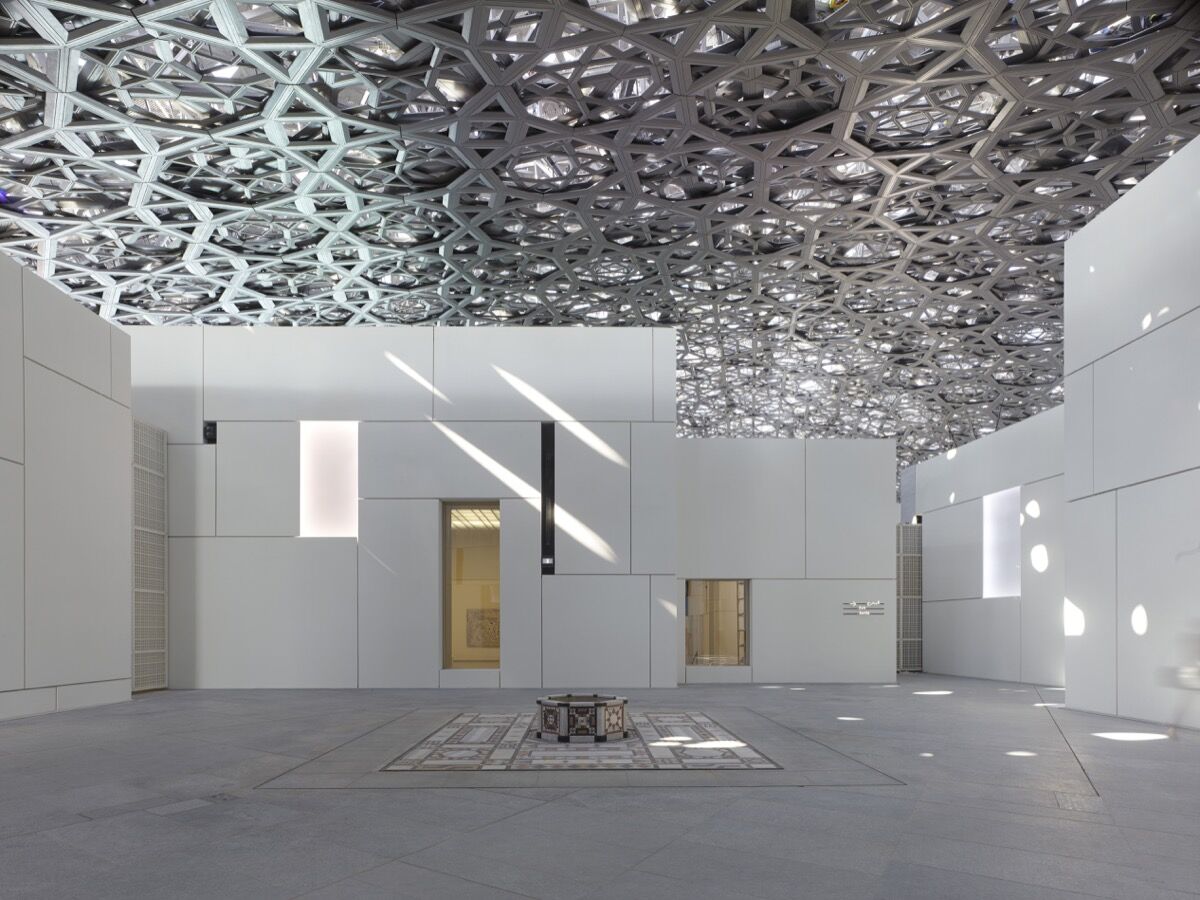 While the budget might not yet stretch to the Edenic heights of the architect’s dreams, a gigantic amount of resources have been poured into the Louvre Abu Dhabi and the rest of the Saadiyat Island complex—£18 billion ($23.5 billion), according to the The Guardian. Cultural tourism is one of the avenues the UAE is banking on to diversify its oil-based economy. Spearheaded by the TDIC, the “island of happiness” has been conceived as a global cultural destination, which will host offshoots of some of the world’s most prestigious art institutions: a branch of the Guggenheim designed by
Frank Gehry
, a maritime museum designed by
Tadao Ando
, and the Zayed National Museum, designed by Foster + Partners and dedicated to the UAE founding father Sheikh Zayed bin Sultan Al Nahyan, are also in the works.
The Louvre hasn’t been the only institution plagued by delays. The Guggenheim Abu Dhabi was also originally meant to open in 2012, but it is still not built, although work on the foundations has begun. The British Museum pulled out of its 10-year cooperation agreement with the Zayed National Museum after only eight years, as it emerged contractors for the building—initially scheduled for completion in 2013—were yet to be appointed.
It was never going to be plain sailing: The staggering ambition of Saadiyat Island, as well as the cultural and legal differences between the Emirates and its European and American partners, have made the rush to Saadiyat a choppy ride. In the case of the Louvre, the UAE initiated talks with Paris, which led to an intergovernmental contract between France and the UAE, signed in 2007 and reportedly worth €10 billion ($11.6 billion), according to The Art Newspaper. As part of the deal, the Louvre committed to a 30-year cooperation with Abu Dhabi, which included the loan of artworks for 10 years, four exhibitions per year for 15 years, and the use of the Louvre name. In exchange, the Emirati agreed to pay the Louvre €974 million ($1.12 billion) over three decades, providing funds that have been used, in part, to fund the Paris museum.
In 2006, as the French and Emirati leaders were preparing to sign on the dotted line, art historians Jean Clair and Roland Recht and Musée d’Orsay founding director Françoise Cachin published an open letter in Le Monde asking if the Louvre wasn’t “selling its soul,” reflecting concerns widely shared among the Parisian intelligentsia. What was at stake were questions surrounding the price of culture, and what was then a growing unease regarding the transformation of national museums into global brands—questions that, a decade on, seem almost quaint. 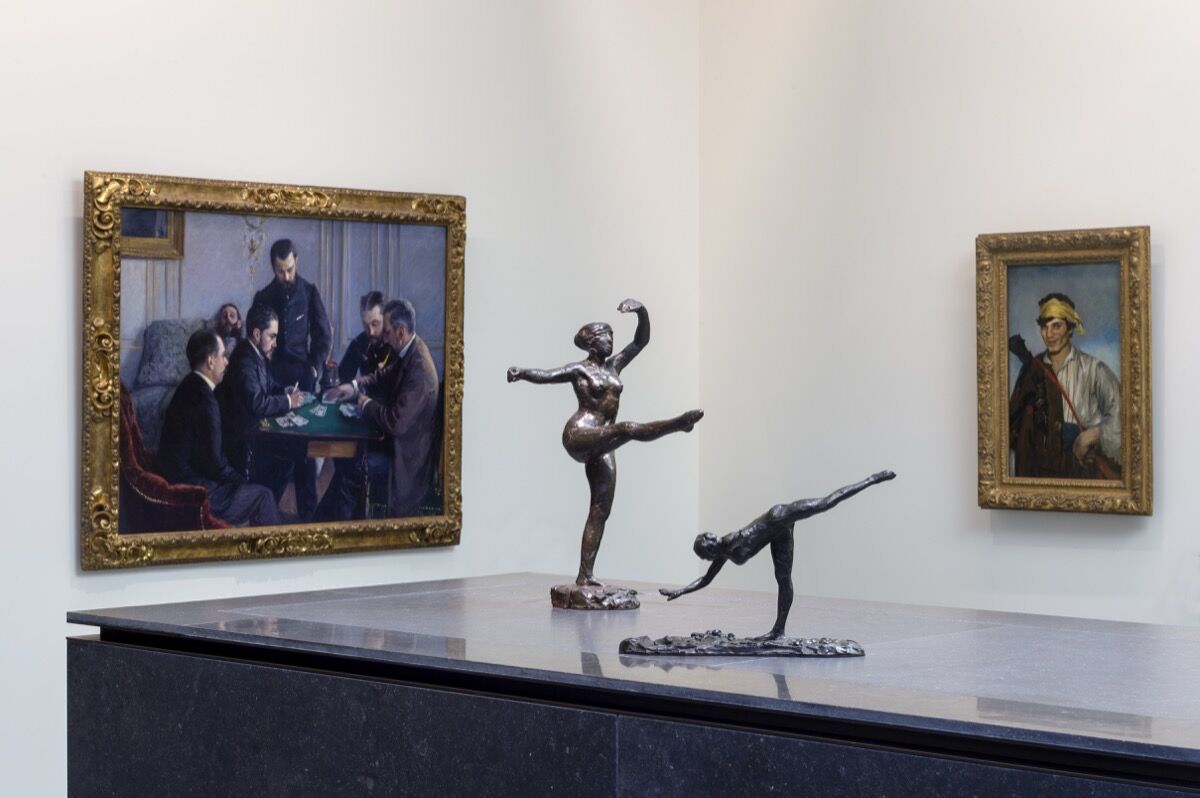 Advertisement
The Louvre’s former director Henri Loyrette was also lukewarm about an Emirati branch, but the project has been backed fervently by his successor, Jean-Luc Martinez, now the Louvre’s president. During the press conference, Martinez described the new museum as “the most ambitious cultural project of the early 21st century,” the “first universal museum in the Arab world”—one that, he added, has pushed the Louvre to rethink its “Eurocentric logic.”
For all the talks of universality, the rights of the mainly South Asian migrant workers who built the Louvre Abu Dhabi remain a sensitive issue, and activists have repeatedly raised the alarm. In the UAE, there’s no minimum wage, trade unions are illegal, and workers are often paid as little as $200 per month. According to several recent reports in the international press, the delay or withholding of wages remains common, as is the Kafala system, which renders the employer responsible for the visas and legal status of its employees, and has been notoriously open to abuse. Strikes in 2011 and 2013 by employees of the Louvre contractor Arabtec have ended up with many of them having to leave the country.
Nouvel reignited the controversy last September when he told The Guardian that there was “no problem” with the workers hired to build the Louvre. He hammered the point home during the opening press day, telling a group of journalists: “We went to see the workers’ accommodations, we checked the equipment, the schedule…everything was done to ensure [the working conditions] were exemplary.”
Yet despite Nouvel’s reassurances—and the Employment Practices Policy issued by TDIC in 2009—activists have found that the conditions of thousands workers employed in the construction of the Louvre were a far cry from “exemplary.” Writer Guy Mannes-Abbott, a core member of the Gulf Labor Coalition (GLC)—which also includes artists
Hans Haacke
,
Naeem Mohaiemen
, and
Walid Raad
—doesn’t mince his words. The Louvre Abu Dhabi is “a universal museum built under conditions of forced labor,” Mannes-Abbott told Artsy via email. “Where is the innovation in that?” he asked. “What’s new? Where’s the pride or even the dignity?” 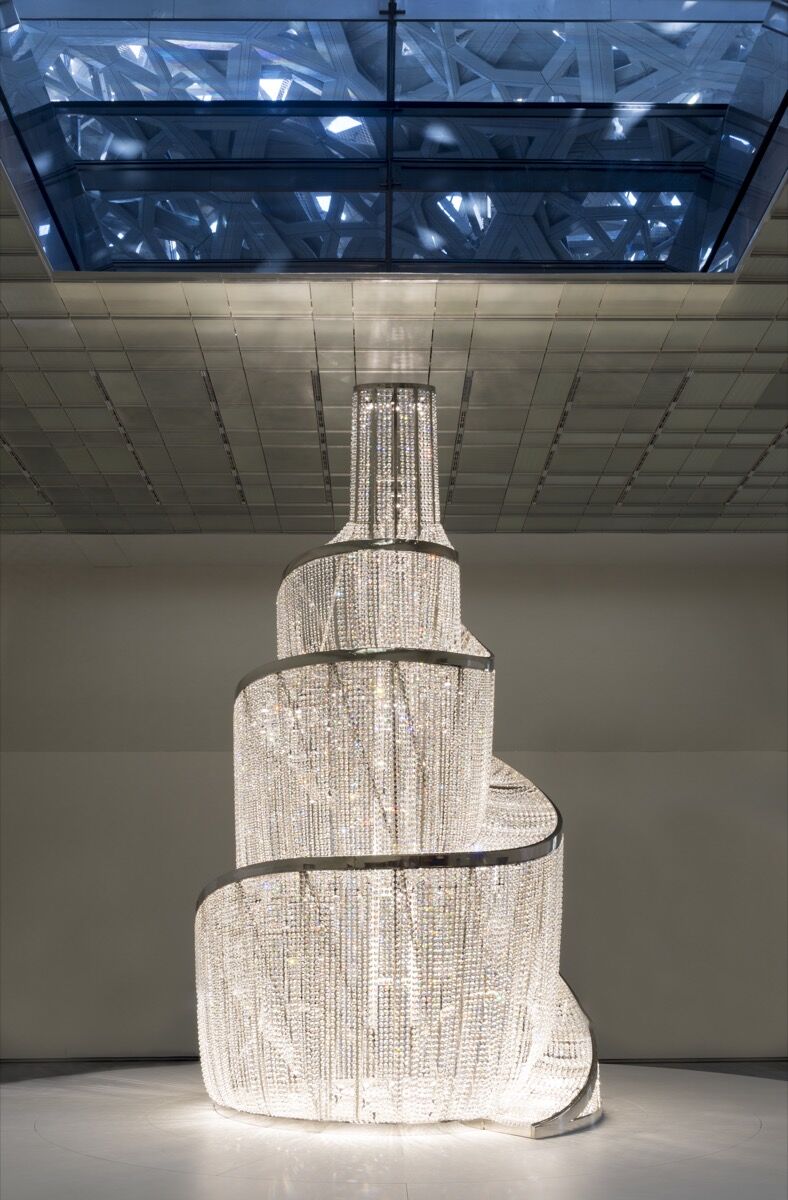 In an open letter dated October 5, 2017, the GLC asked the Louvre to “refund workers’ recruitment fees and wages lost due to criminalization, imprisonment, termination, and deportation of workers who go on strike.” According the Mannes-Abbott, the museum has yet to respond.
Another embarrassment for the Louvre Abu Dhabi is the recent publication of Alexandre Kazerouni’s book Le miroir des cheikhs, musée et politique dans les principautés du golfe Persique (Sheikhs’ Mirror: Museum and Politics in the Kingdoms of the Persian Gulf), reviewed in the November issue of The Art Newspaper. Kazerouni claims that some of the monies used to fund the museums on Saadiyat Island come from the Offset Program Bureau (later renamed the Tawazun Economic Program), a fund established in 1992 to collect the sums that states selling arms to the UAE are required to invest in the country. According to Kazerouni, assets from the OPB were used to create what’s known as the Mubadala investment fund in 2002. In 2009, the Mubadala investment fund bought into the TDIC, which oversees Saadiyat Island and its museums. This would mean that monies gained as a result of the arms trade—possibly, even, of arms deals with France—might have been spent on the Louvre Abu Dhabi.
The Louvre Abu Dhabi is surely hoping some of this contentious background will be eclipsed by its stunning inaugural display, which gathers around 300 loans from 13 French institutions, as well as 300 pieces from the Louvre Abu Dhabi’s fledgling collection. According to Jean-François Charnier, Scientific Director of Agence France-Muséums (the French agency in charge of the Louvre Abu Dhabi), the exhibition is a reflection on what he calls “inter-culturality.” The idea, he explained, was to “de-compartmentalize” the museum’s traditional departments and foster a new kind of museology “consistent with globalization.”
What this means in practical terms is that, instead of having, say, Greek galleries, Roman galleries, 18th-century painting galleries, and so on, the curatorial team in Abu Dhabi has devised a roughly chronological display with objects grouped by function, as well as formal and symbolic affinities. In the first room, which acts as a sort of manifesto for the entire debut exhibition, gold funerary masks from Northern China (907–1125), Lebanon (600–300 BCE), and Peru (100 BCE–700 CE) float in a transparent vitrine. Elsewhere, an animal-shaped stone from Puerto Rico (1200–1492) stands by a frieze fragment from a Christian monastery (UAE, Sir Bani Yas, 500–800) and an Aztec round stone carved with a feather motif (Mexico, 1325–1521).
Marcel Duchamp
’s Bottle Rack (1914) is paired with Nkisi, a “magic statue” studded with nails and hailing from early 20th-century Gabon.
The visual effect is attractive, and no doubt helps to dress up the Louvre Abu Dhabi’s relatively scarce holdings (by way of comparison, the Louvre in Paris boasts over half a million objects in its collection). What’s more, unlike the organization in Paris, the display in Abu Dhabi highlights the diversity of civilizations that developed simultaneously around the globe. It’s an all-too-rare approach to human history, one that urgently champions a message of respect. Yet once the point has been made, the exhibition provides very little in terms of in-depth information. The aesthetic experience is engaging, but not always satisfying, as it offers few opportunities to learn beyond the purely formal.
Learning in the traditional sense, however, doesn’t seem to be the point. The Louvre Abu Dhabi isn’t a “school,” repeated Charnier, who said that while specialists will always study the differences between cultures, the important focus, in an era marked by soaring nationalisms, was “to rethink our commonality.”
“People will come to the Louvre Abu Dhabi with questions,” said deputy director Hissa Al Dhaheri during the press conference, “and if we have done our jobs, they will leave with more.” One can only hope too many of them won’t remain unanswered.
Coline Milliard
Related Stories