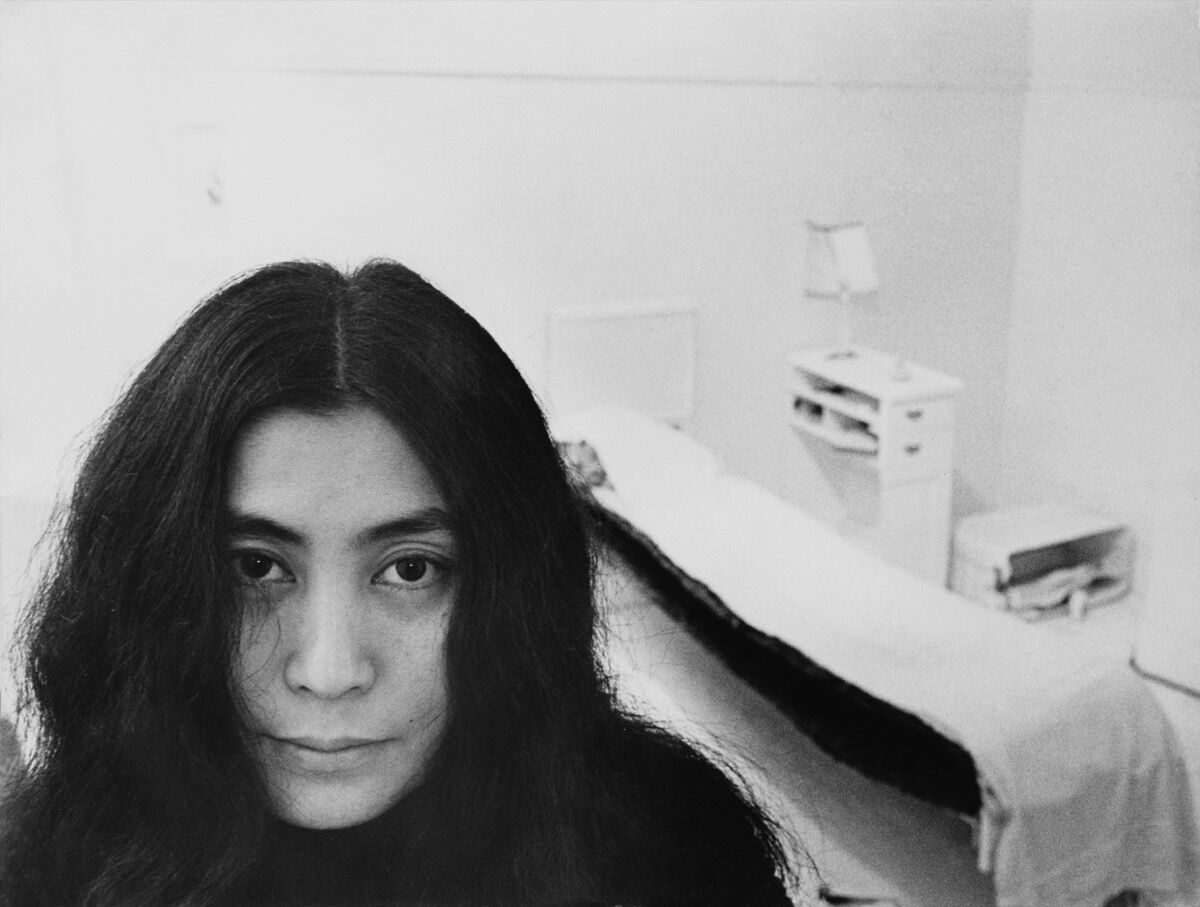 In 1971, an ad ran in the the Village Voice for an exhibition titled “Museum of Modern [F]art.” The subheadline read: “Yoko Ono—one woman show.”
In response, many visitors trekked to the MoMA looking for
Yoko Ono
’s irreverent work; by that time, she’d garnered a large following for her vanguard
conceptual art
practice and her marriage to
John Lennon
of the Beatles. But when people arrived at the museum, Ono’s work was nowhere to be found. Instead, the museum had tacked a clipping of the ad to its ticket window, along with the announcement: “THIS IS NOT HERE.” 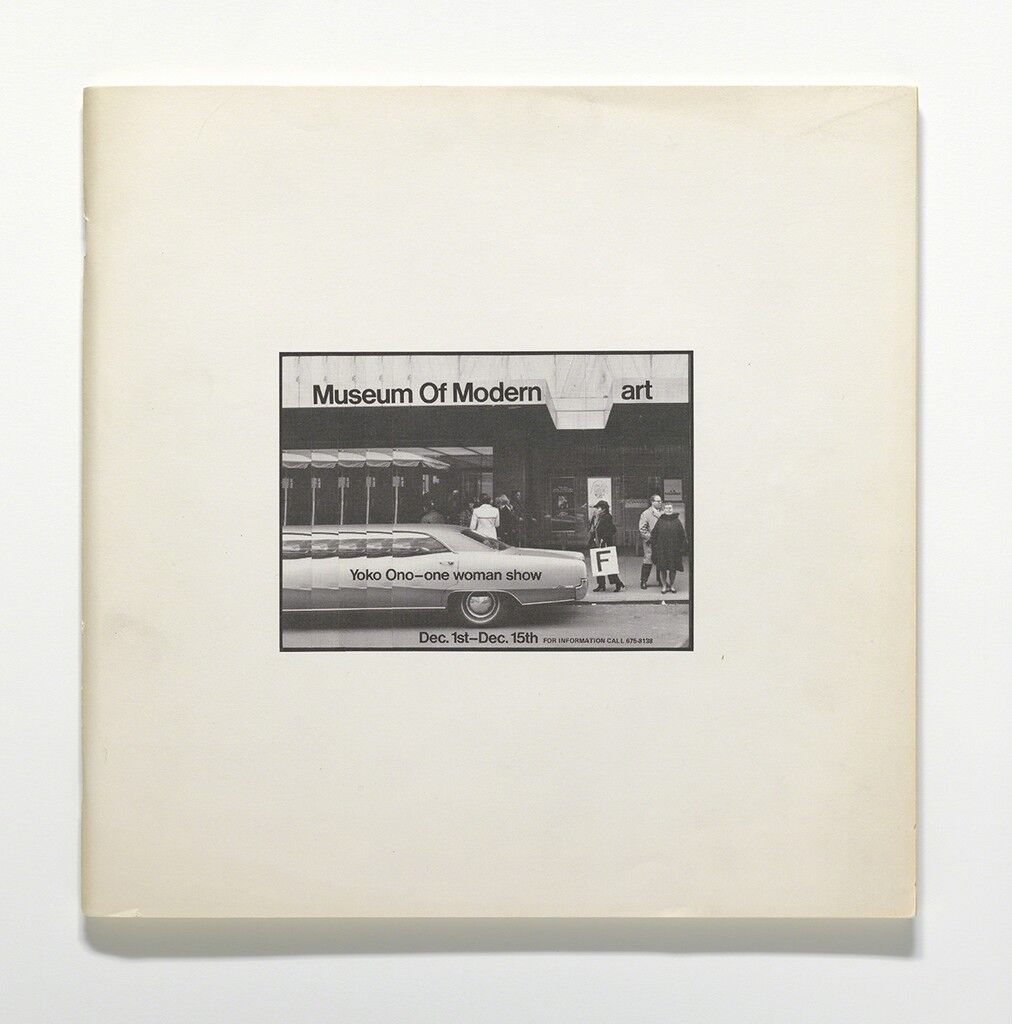 Yoko Ono
Museum of Modern [F]art, 1971
"Yoko Ono: One Woman Show, 1960-1971" at Museum of Modern Art, New York (2015)
Ono’s work, it turned out, was the ad itself. She was taking a jibe at the storied art institution, while mischievously making it an unwilling participant. The piece was only complete when visitors to the museum were playfully surveyed with the question: “How did you like Yoko’s show?”
Museum of Modern [F]art (1971) is one of many conceptual artworks Ono has produced over her long career, which began in the 1960s in New York, Tokyo, and London, and continues to this day. In the ’60s and ’70s, she became associated with the
Dada
-inspired
Fluxus
movement, collaborating with artists ranging from
John Cage
to
George Maciunas
, and her work has since been recognized as integral to the development of feminist, performance, video, and installation practices. Below, we explore five of Ono’s most influential pieces—many of which invite audience participation, a radical hallmark of her practice. Advertisement
On July 20, 1964, when Ono was 31 years old, she debuted Cut Piece at the Yamaichi Concert Hall in Kyoto, Japan. At the time, she was already known in the avant-garde art communities of New York and Tokyo, and had been recognized in Japan for her 1962 collaboration with John Cage and David Tudor, in which Ono laid across the top of an open grand piano. Cut Piece was innovative, though, for its fusion of active, even aggressive audience participation, and for its feminist themes.
For the performance, Ono sat motionless on stage wearing a long-sleeved black suit, with a pair of scissors in front of her. An announcement to the audience invited them to “come on stage—one at a time—to cut a small piece of the performer’s clothing to take with them,” according to Ono’s original score for the artwork. During both this performance and its reprisals in Tokyo, New York, London, and Paris, viewers followed Ono’s instructions and snipped away at cloth, revealing her naked body underneath. In the process, Ono simultaneously gave viewers agency in the creation of art, and implicated them in the act of exposing the female body. As Helena Reckitt put it in her book Art and Feminism, Cut Piece explores “how viewing without responsibility has the potential to harm or even destroy the object of perception.” 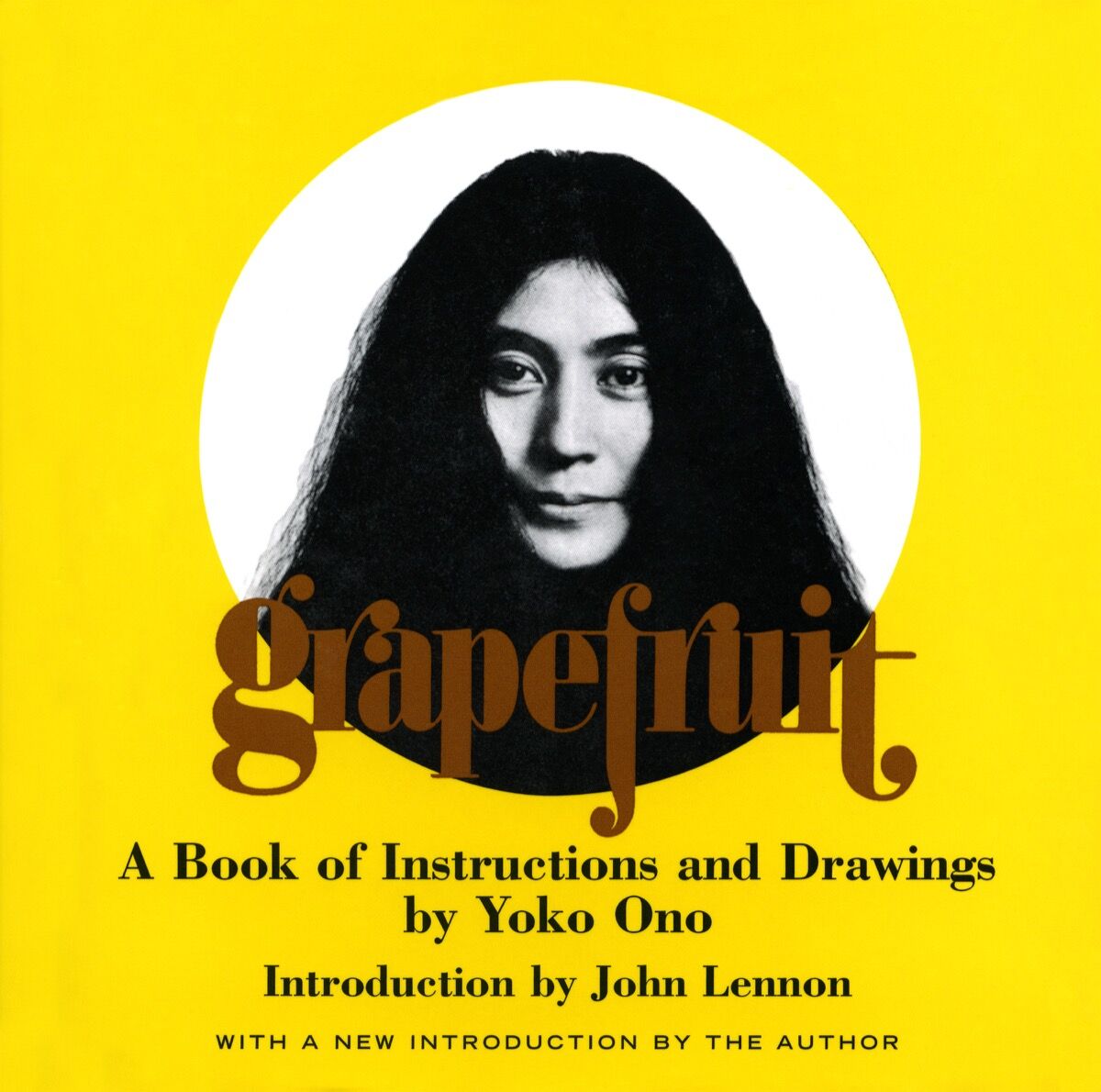 Cover of a re-issue of Yoko Ono, Grapefruit, 1971, published in 2000 by Simon and Schuster. © Yoko Ono. Courtesy of the artist and Galerie Lelong. 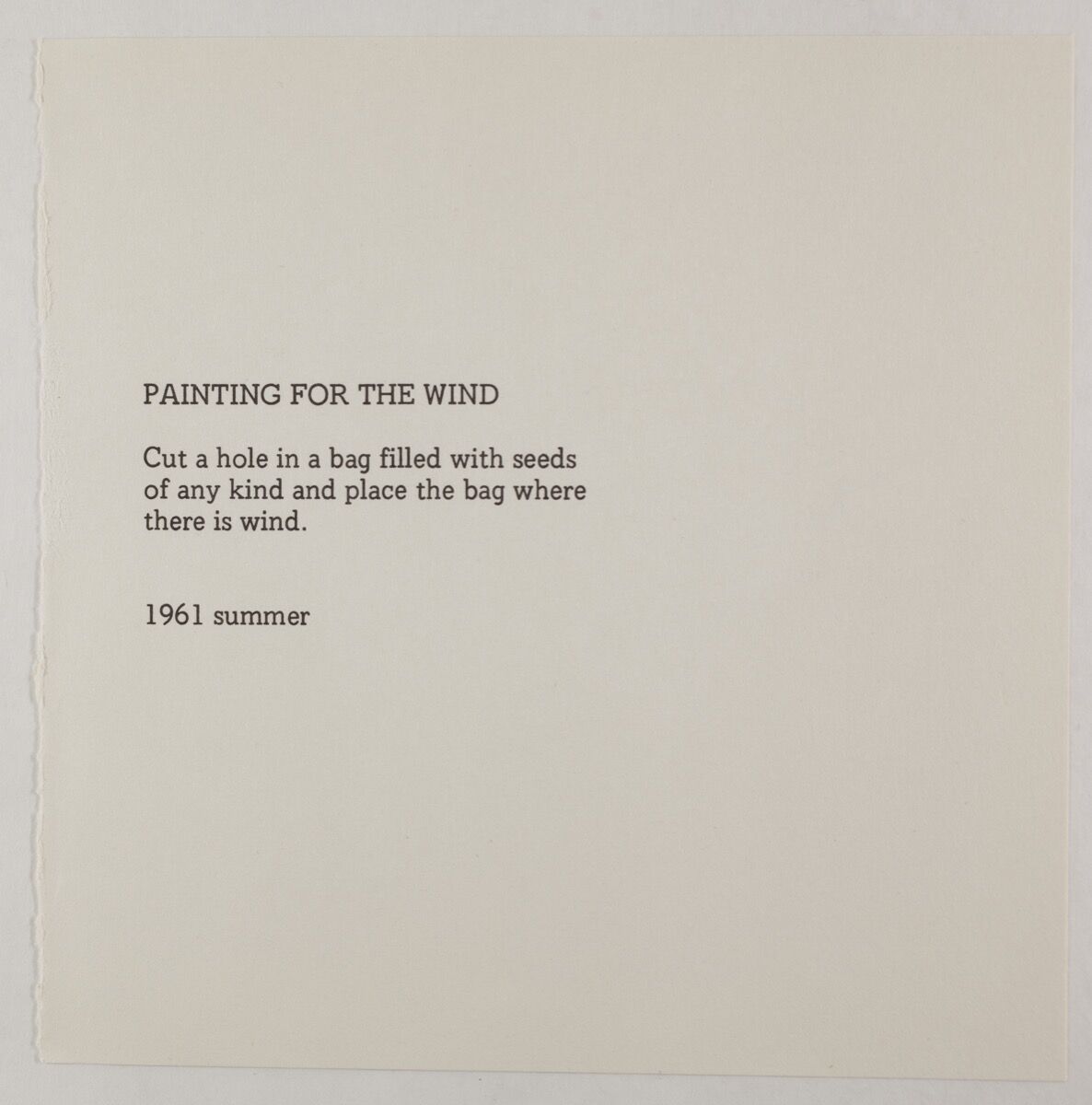 The same year Ono debuted Cut Piece, she created another iconic work based on a “score,” her parlance for instructions meant to spark audience involvement. Grapefruit (1964) takes the form of a small book—the size of a daily planner—filled with directives for readers. “I did it because it was so interesting to do an instruction piece,” Ono mused in a recording produced by the MoMA. “Why don’t we do it in a way that you don’t finish the piece but ask other people to finish it in their own way.” 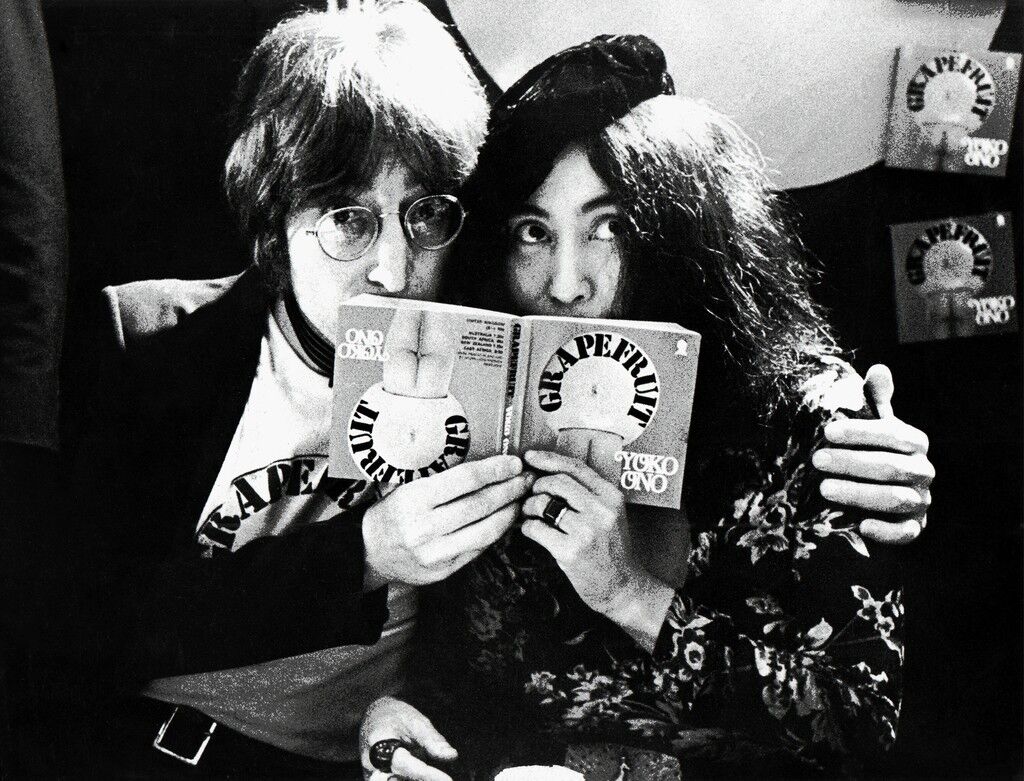 Gijsbert Hanekroot
John Lennon / Yoko Ono, London, UK, 1971
Blue Lotus Gallery
Organized into five sections—Music, Painting, Event, Poetry, Object—the prompts range from minimally zen to delightfully absurd and are inflected with hippie-era abandon. “Smoke everything you can / including your pubic hair,” Ono suggests on one page. “Step in all the puddles in the city,” or “Leave a piece of canvas or finished painting on the floor or in the street,” she instructs on others. She’d already followed some of these directions herself, like the canvas left on a floor for others to tread on. But the point of this book wasn’t for Ono to document her own performances; it was to break down the boundaries between art and life—a defining tenet of the Fluxus movement—by encouraging others to participate in her radical thinking. 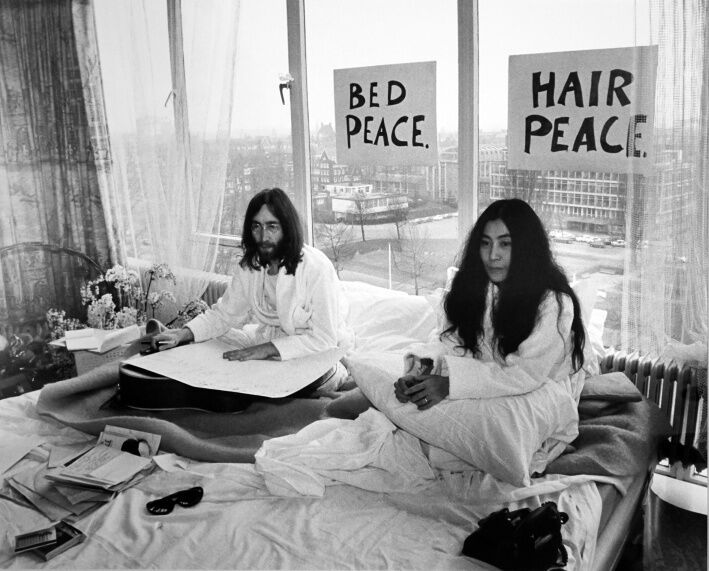 Tony Grylla
John Lennon and Yoko Ono, Bed Sitting Amsterdam, 1961
Forum Auctions
Ono’s work took on a political dimension in the late 1960s as the Vietnam War persisted. In several pieces, she advocated for pacifism and an end to war, including her most famous collaborative performance with Lennon: Bed-In (1969). The work took shape in 1969, during the couple’s honeymoon in Amsterdam. They announced the event with a cryptic invitation: “Come to John and Yoko’s honeymoon: a bed-in, Amsterdam Hotel,” as Lennon later remembered. While some members of the media assumed the performance would resolve as an act of public love-making, it was, in fact, a form of protest. 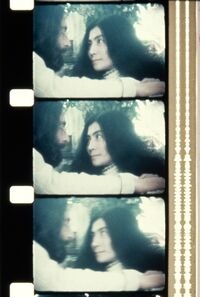 Bed-In for Peace
View Slideshow
2 Images
From March 25th to March 31st, the couple sat in a hotel bed under signs that read “Hair Peace” and “Bad Peace,” while fielding questions from the press from 9:00 a.m. until 9:00 p.m. With the performance, the couple extended the pacifist tradition of sit-ins and launched a large-scale, international campaign for peace that included the dissemination of their famous slogan: “WAR IS OVER—if you want it.” “I think we’re going to have a peaceful world,” Ono later mused of the work, in a recording produced by MoMA, “but it’s just taking a little bit more time than we thought then.” 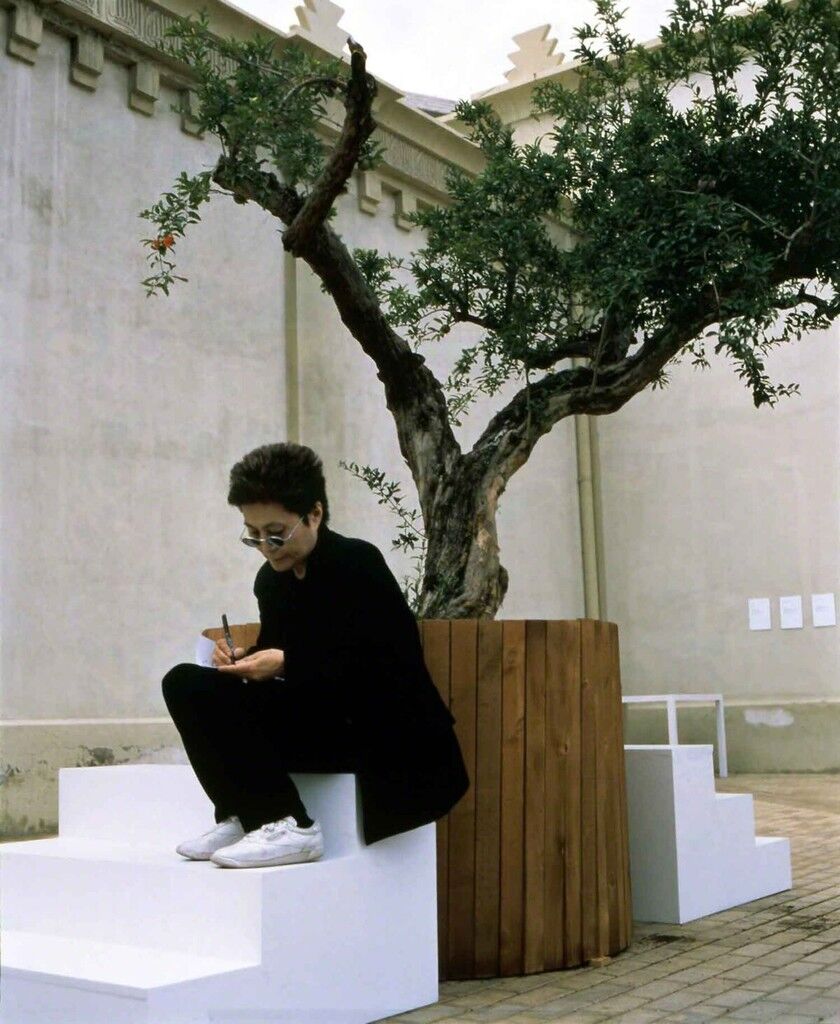 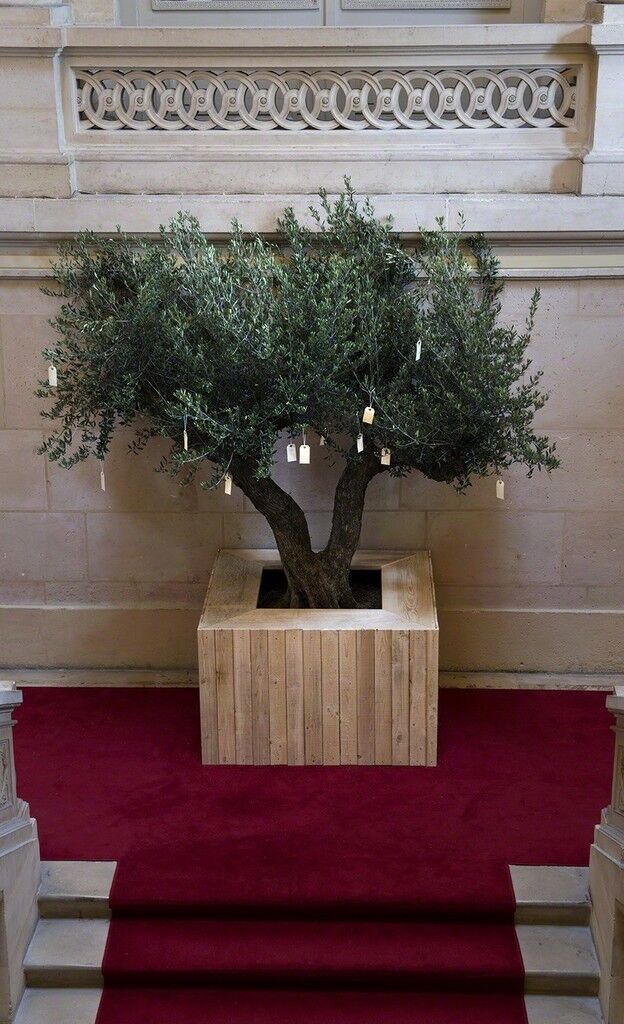 Yoko Ono
Wish Tree, 1996-2015
"Take Me (I'm Yours)" at Monnaie de Paris
Ono’s penchant for fusing pacifism and audience participation is perhaps best seen in her ongoing sculptural project Wish Tree. The piece invites visitors to write their wishes and dreams on a small piece of paper, which they then hang on a living tree. The work was inspired by Ono’s childhood experiences visiting local temples in Japan: “Trees in temple courtyards were always filled with people’s wish knots, which looked like white flowers blossoming from afar,” she recalled in Yoko Ono: All My Works Are a Form of Wishing. Building upon this tradition, Wish Tree encourages meditation on the meaning of life and encourages hope, collaboration, and communication through collective action.

Wish Tree
View Slideshow
2 Images
In the words of curator Catherine J. Morris of the Brooklyn Museum, which showed the piece in 2012–13, the work is a “kind of living monument to all our dreams, big and small.” In a 2017 installation of Wish Tree at the Guggenheim, visitors invoked “equality, respect and fair opportunity for all” and “an end to hatefulness in the world,” among many other things. 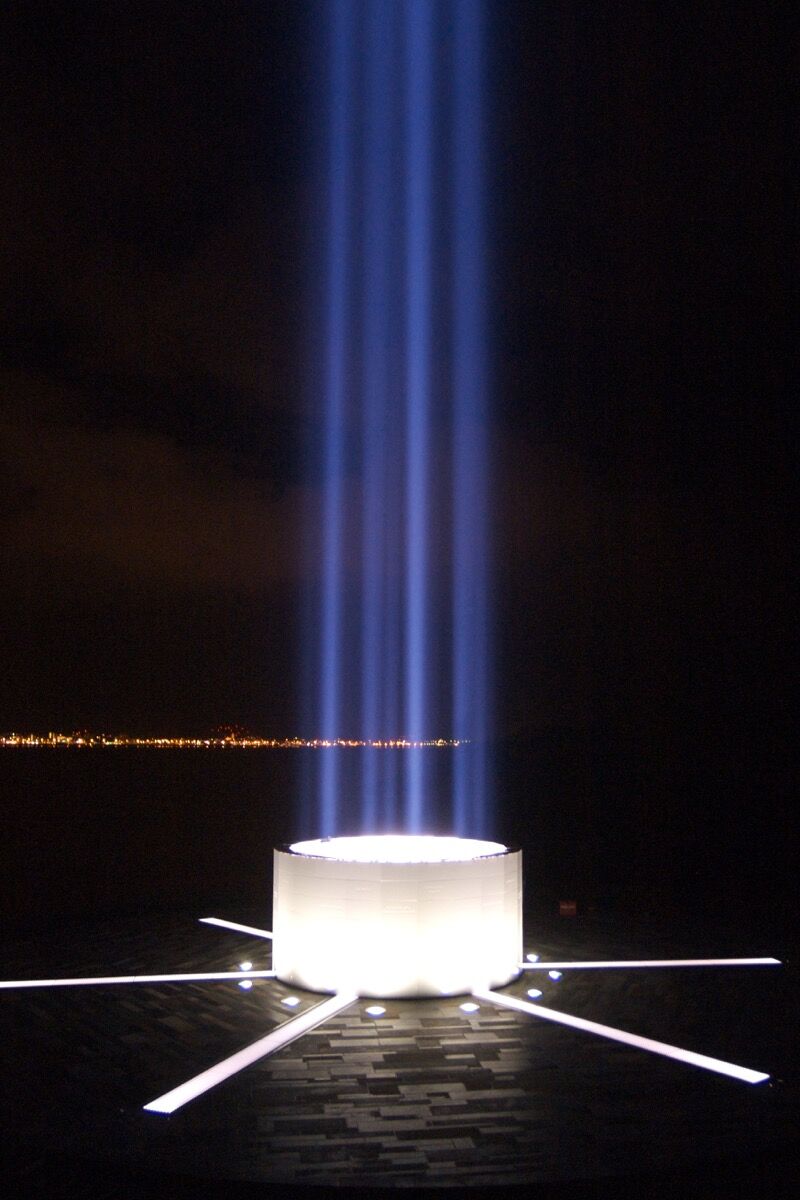 As an extension of Wish Tree, Ono created Imagine Peace Tower (2007), a public installation on Iceland’s Viðey Island, off the coast of Reykjavík. Taking the form of a beaming tower of light, the work is meant to act as a beacon for world peace. After every Wish Tree installation comes to a close, Ono collects its tags and buries them ceremonially next to the tower. Over 1 million wishes have been shared with the artist to date.
Imagine Peace Tower is a permanent manifestation of Ono’s ongoing IMAGINE PEACE campaign, which has also taken the form of billboards, tweets, and newspaper ads around the world in over 24 languages. “I hope Imagine Peace Tower will give light to the strong wishes of world peace from all corners of the planet and give encouragement, inspiration, and a sense of solidarity in a world now filled with fear and confusion,” Ono has explained of the piece. “Let us come together to realize a peaceful world.”
Alexxa Gotthardt
Related Stories

The Superstitious Rituals of Highly Creative People, from Salvador Dalí to Yoko Ono 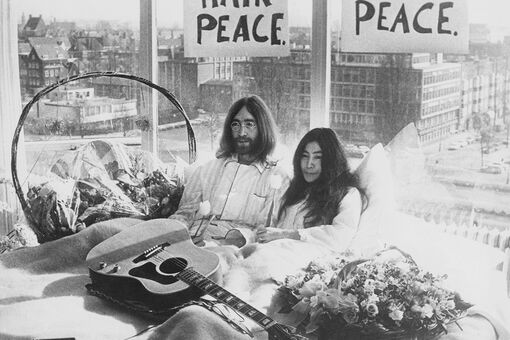 When John Lennon and Yoko Ono Invited the World into Bed with Them
Tess Thackara
Sep 25, 2018 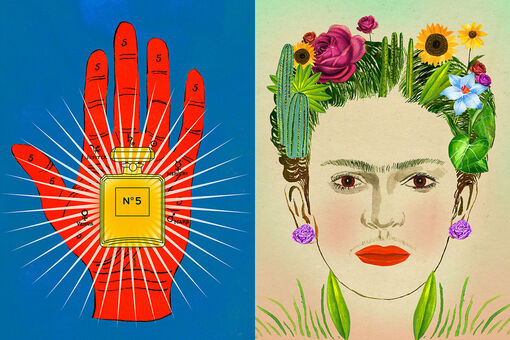