Artsy Editors
Apr 27, 2016 10:30pm
In preparation for the 2016 edition of Gallery Weekend Berlin, an extensive agenda of openings across the city’s art-filled neighborhoods that runs from April 29th–May 1st, scan through the shows of the 50 participating galleries, including our picks for exhibitions that absolutely should not be missed.

A |
Sebastian Black
and
Megan Rooney
at Croy Nielsen

In the main space, Black presents new abstract paintings in warm or cool colors, made up of soft, undulating shapes that are drawn from a cartoon puppy motif. While past works have resembled the puppy’s face, these new works no longer recall the original reference other than the occasional paw or muzzle. In the gallery’s Garage space, Rooney’s show, titled “Piggy Piggy,” continues her practice of paintings and installations inspired by her own narrative texts—past installations include inflatable pool fountains, upturned umbrellas, and mattresses covered with pillowy dolls.
B |
Carsten Nicolai
at Galerie Eigen+Art

Tapping into his expertise in music as well as art, Nicolai’s show, “reflektor distortion,” is based around the idea that individuals have distorted perceptions of reality. The site-specific, ever-changing installation comprises a rotating basin filled with water, set nearby a wall of fluorescent lights that it reflects; all the while, speakers emit sound that disrupts the water’s surface.
C |
Hiwa K
and
Tobias Zielony
at KOW

In his first solo show in Germany, Kurdistan-born artist and musician Hiwa K presents a series of videos. These include documentation of the artist’s involvement in 2011 protests in Sulaimany, Iraq, which were broadly underrepresented in the media, and his mixed-media installation commissioned by Serpentine Gallery, “It’s Spring And The Weather Is Great So Let’s Close All Object Matters” (2012). Zielony’s show builds upon his project “The Citizen,” a series of photographs documenting the issues that African refugees face in Germany, accompanied by articles contributed by 12 African newspapers in response to the images, which was shown in the German Pavilion at the 56th Venice Biennale.
D |
Tobias Rehberger
at neugerriemschneider

Rehberger takes the collaborative spirit that is at the core of his practice to new heights with “presently.” The exhibition, a reconfiguration of the traditional group show, was realized with the help of over 60 artists, musicians, architects, and designers—individuals whom he calls friends, colleagues, and mentors.

I |
Jim Lambie
at Gerhardsen Gerner

A |
Ed Fornieles
at Arratia Beer

In his first solo show at the gallery, Fornieles transforms the space into a health food bar—filled with his sculpture, animation, film, and web-based art—which is focused on ideas of self-improvement and dieting. Fornieles creates parallels between a privileged, health-conscious lifestyle, and notions of the “American dream” and the Enlightenment.
B |
Michael Rakowitz
at Barbara Wien

For his ongoing work The invisible enemy should not exist (2007–), Rakowitz has investigated the looting of artifacts at Baghdad’s National Museum of Iraq, which occurred following the U.S. invasion of the city in 2003. In this latest iteration of the project, the artist presents intricate new sculptures that reconstruct the lost artifacts, made from everyday found materials like newspaper, packaging, cardboard, and foil.
C |
Harland Miller
at Blain | Southern

Miller has built his career around paintings that cleverly appropriate book covers (most notably, Penguin Classics), swapping in ironic phrases and his own name in the place of the title, subtitle, and author. In his first-ever solo show in Germany, the artist debuts new large-scale paintings (nearly 10 feet in height) that feature original imagery, and the artist’s signature Penguin series, including the work that inspired the show’s title, Tonight We Make History (P.S. I Can’t Be There) (2016).
D |
Andy Hope 1930
at Galerie Guido W. Baudach

In his new exhibition, Andy Hope 1930 (the alter ego of artist Andreas Hofer) has adopted recognizable motifs like the logo of Monster Energy drinks and red devil horns to create paintings that play with the associative power of images—and how we perceive these images outside of their expected contexts.
E |
Ketuta Alexi-Meskhishvili
at Galerie Micky Schubert

Alexi-Meskhishvili’s photographs range from images of staged models paying homage to forebearers like
Lee Friedlander
and
Robert Mapplethorpe
to snapshots that have been spliced together. Working with both digital and analog methods, her works are often bathed in gradations of soft blues, greens, and pinks, or picture her subjects before reflective surfaces, adding visual and narrative weight to the two-dimensionality of her medium.
F |
Aleksandra Domanović
at Tanya Leighton

Known for robotic hands inspired by the first attempts to develop prostheses with a sense of touch and works that surface notions of cyberfeminism or the underlying politics that govern everyday life, Domanovic now turns her focus to the roles that animals play in society—from the Stone Age through the future. Titled “Bulls Without Horns,” and filling both gallery spaces, the show’s scope ranges from the symbolic value of animals to DNA experimentation and genetic modification. 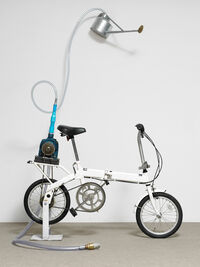 A |
Bettina Pousttchi
at Buchmann Galerie

Ahead of exhibitions at the Hirshhorn Museum and the Phillips Collection in Washington, D.C., Pousttchi shows exacting, ceramic squares in lattice patterns, which were inspired by the arrangements of wooden beams she saw in photographs of historic, half-timbered houses. The squares are displayed in careful, architectural formations that engage with the space, like tiles climbing up the walls.
B |
Daniel Buren
at Buchmann Galerie

This show of early works by Buren comprises iconic 8.7-cm-wide stripe works that sit on the floor like objects, rather than paintings. Dating from 1966 and 1969, these are among the artist’s first signature works, which he created in situ across the world.
C |
Mark Wallinger
and
Iman Issa
at carlier | gebauer

Wallinger’s stunning “id Paintings” (2015) may resemble Rorschach prints, but they’re actually physical traces of the artist himself—created by covering his hands in paint and running them across canvases cut to the size of his arm span and height. In Issa’s “Heritage Studies,” her first exhibition with the gallery, the artist shows recent works from a series of sculptures inspired by artifacts in museums—like an astrolabe found in Iraq dating to 984 A.D.—and consider the relevance of these historic objects in the present.
D |
Hanne Darboven
at Galerie Crone

This new show of Darboven’s work follows recent retrospectives at Haus der Kunst in Munich and Bundeskunsthalle in Bonn, and continues to explore the late conceptual master’s legacy. Best known for her minimalist installations, the show includes early works that preceded her use of systems of codes and numbers, as well as the rarely displayed 444-part installation Evolution Leibniz (1986).
E |
Bernard Piffaretti
at Klemm’s

In “No Chronology,” Piffaretti continues the practice of reflecting on the act of painting, while painting. In creating these works, his methodical process involved dividing his canvases vertically with a line of paint, creating an abstract image on one side, then replicating it on the other side.
F |
Peles Empire
at Wentrup

Artist duo Peles Empire bring their expansive practice into the gallery through a room-sized installation spanning sculpture, rugs, and wallpaper. The artists, Katharina Stöver and Barbara Wolff, are inspired by the anachronistic fusion of decorative styles they encountered in the historic Peles Castle in Romania; their work revolves around recreating the lush rooms there.
G |
Annette Kelm
,
Claudia Comte
, and “Gartenschau” at KÖNIG GALERIE

At St. Agnes, Kelm’s enigmatic photography fills the nave—images of everyday objects like playground equipment, pizza boxes, and dollar bills, set in bright colors and dynamic compositions—while Comte transforms the chapel space. In her first show with the gallery, Comte debuts a site-specific, highly designed installation comprised of 10 hanging wooden plinths, paintings, and refined wood sculptures. Outside, the gallery has assembled a sculpture garden, including a water sculpture by
Tatiana Trouvé
and an installation by
Alicja Kwade
, which is open to the public for the first time.
H |
K.H. Hödicke
at KÖNIG GALERIE

During the time of the Berlin Wall and the decade following,
Neo-Expressionist
painter Hödicke had his studio in the West Berlin neighborhood where Johann König’s gallery now resides. The paintings on view are the artist’s observations of the urban development of this part of the city during the GDR era. 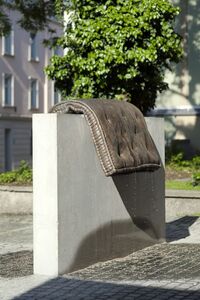 A |
Wolfgang Tillmans
at Galerie Buchholz

For this new exhibition, titled “Studio,” Tillmans has taken stock of his workspace. Stripping away the behind-the-scenes allure of the artist’s studio, he presents documentary-like images of his space and its contents, depicting the various, shifting functions of this setting and its essential role in his practice as a photographer.
B |
Richard Phillips
at Mathew

Following Phillips’s fall 2015 show at Mathew’s New York outpost, in which he presented paintings that meshed stock imagery and the abstract tendencies of
Christopher Wool
and
Albert Oehlen
, the artist now debuts a series in Berlin inspired by
Gerhard Richter
. Taking cues from Richter’s abstract squeegee works, Phillips’s paintings echo the German artist’s idiosyncratic smears of paint over the faces of female subjects. 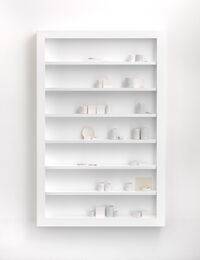