Your Daytrip Guide to the Art of the Berkshires

Kat Herriman
Jul 15, 2015 10:21am
Since the turn of the 20th century, urban creatives have flocked to the Berkshires—a quiet, mountainous region in Massachusetts—as a fresh air summer retreat. Over the years, these fair-weather tourists have left their mark on the area, establishing a rich assortment of arts institutions and seasonal programs highlighting every conceivable discipline, from theater to sculpture. This year, the schedule is as jam-packed as ever. If you are headed to the hills, here are six stops not to miss. 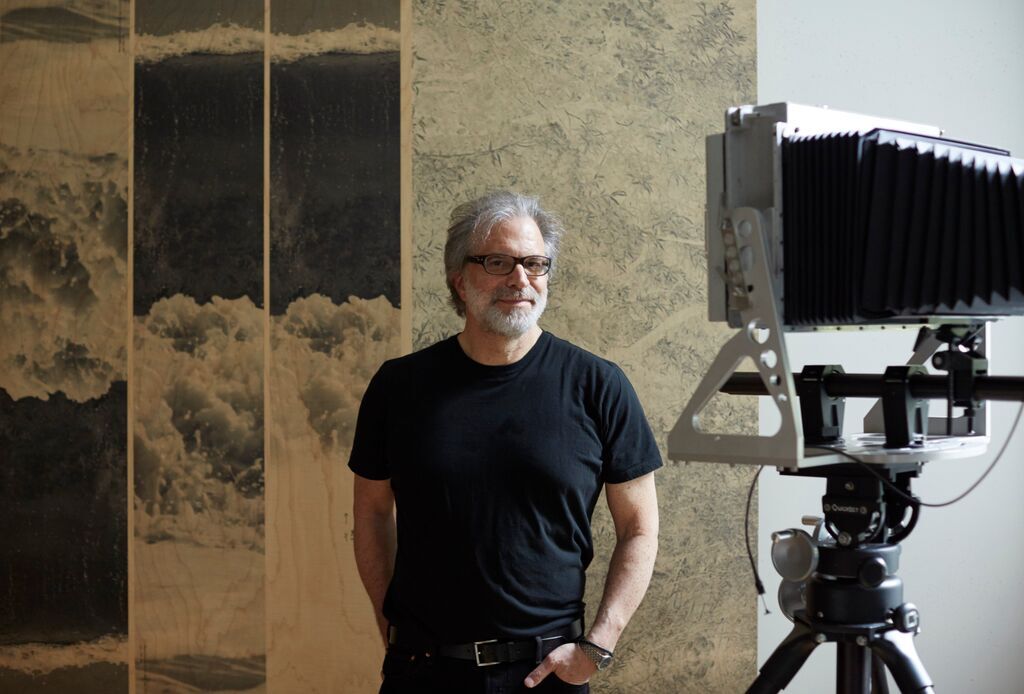 Industrial in scale, MASS MoCA, in the sleepy town of North Adams, is well known for its site-specific wonders. This summer, the museum stages its largest show to-date: a monumental solo exhibition focused on photographer
Clifford Ross
. The show, “Landscape Seen and Imagined,” extends Ross’s nature-driven imagery to almost every corner of the refurbished factory campus. While originally conceived as a retrospective, the final exhibition includes only a handful of pieces from Ross’s history—most of the work is brand new. “It started as a survey concept,” explains Ross. “But as we were putting it together, those works triggered the opportunity to do something new.”

Well-known works including prints from his “Hurricane” and “Mountain” series are enriched by the debut of two colossal video installations—a collaborative effort between the New York-based artist and the institution’s curatorial team. “My work in video is very much connected to my passion for abstraction,” says Ross, who has experimented with the medium since the beginning of his career. “There were things I felt that were unsaid by my realistic photographs of hurricane waves. Waves move, they have an innate lyricism. I wanted to bring that aspect into the work.” To accomplish this, Ross created a series of projections of the waves that cascade down the exterior walls of the institution’s grand entrance. “When I saw their courtyard, it reminded me of the palazzo in Siena,” says Ross. “My goal was to create something commensurate with its grandeur.” 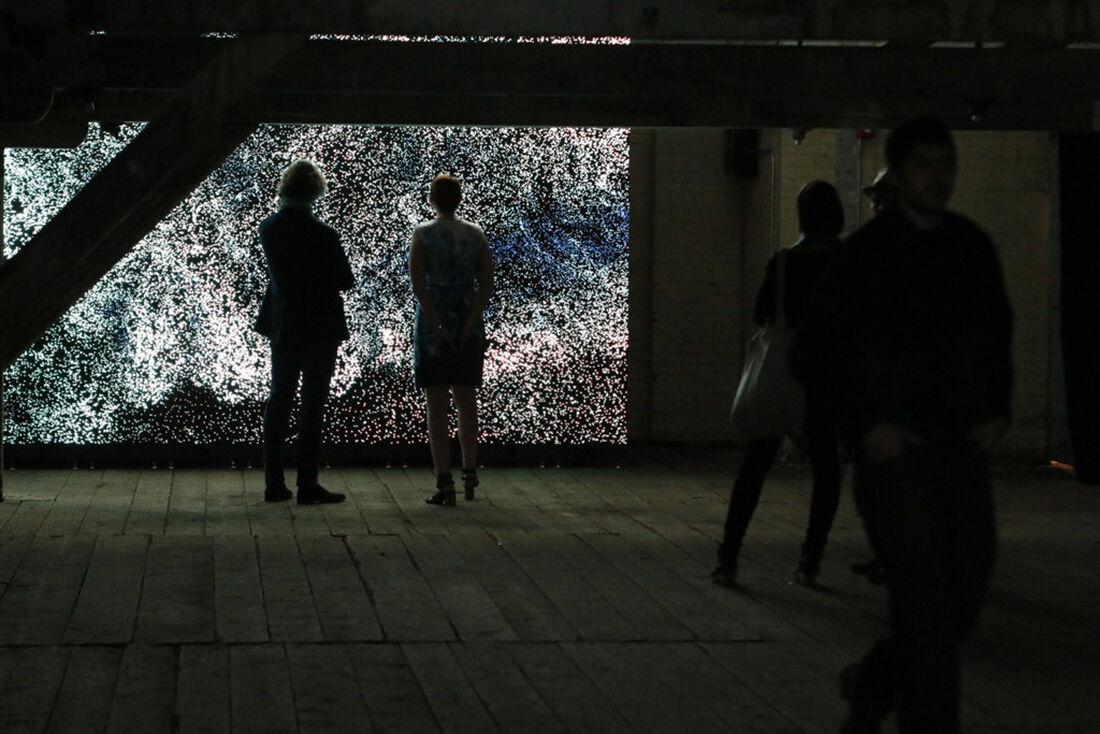 Advertisement
While the cinematic courtyard is enticing, the most impressive spectacle might be Ross’s Wave Cathedral (2015), which inaugurates a warehouse that MASS MoCA renovated just in time for the show. Designed like a corridor, the installation consists of two vast LED screens, 13-by-23 feet, which are animated by Ross’s fluid images. “I had an interest in filming high-definition video of waves, but technically it proved to be impossible. About a year ago, I began thinking about how I could create water movement with a computer,” explains Ross, who harnessed Hollywood animation technology in order to create his naturalistic abstractions. “The waves themselves are made out of dots of light. We created a way to move 1.6 million points of light in a manner that mimics the always surprising movement of the sea. It’s better and bolder than I could’ve imagined.” Housed in an airy building on the outskirts of Mass MoCA’s sprawling campus, this ceramics gallery is only a short walk from the museum’s front door. A joint venture between Ferrin Contemporary and Cynthia Reeves Gallery, the shared space serves as a flexible platform for both galleries to stage large-scale exhibitions and programming.
Don’t expect local kitsch—the outpost boasts a rotating program of internationally acclaimed talents like
Ron Nagle
and
Betty Woodman
. This summer, an abstraction-focused showcase exceeds expectations with a spectrum of sculptural curiosities. Favorites include the moody vases of the late
George Ohr
and delectably paint-glutted pouring cylinders by
Lauren Mabry
. Next door, gallerist Cynthia Reeves homes in on the work of Australian artist
Sarah Amos
with a solo showcase of her latest work. Printed onto felt, Amos’s multilayered abstractions bring the tactility of the printmaking process to the foreground, and energetic, scrawled lines lend a sense of transparency and play to the series. 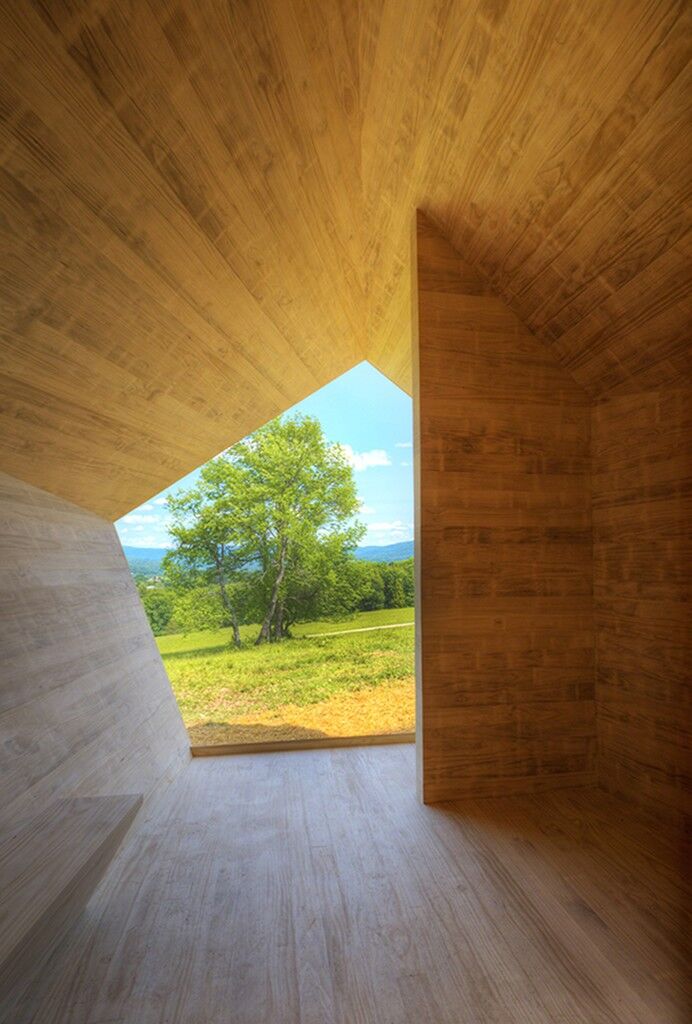 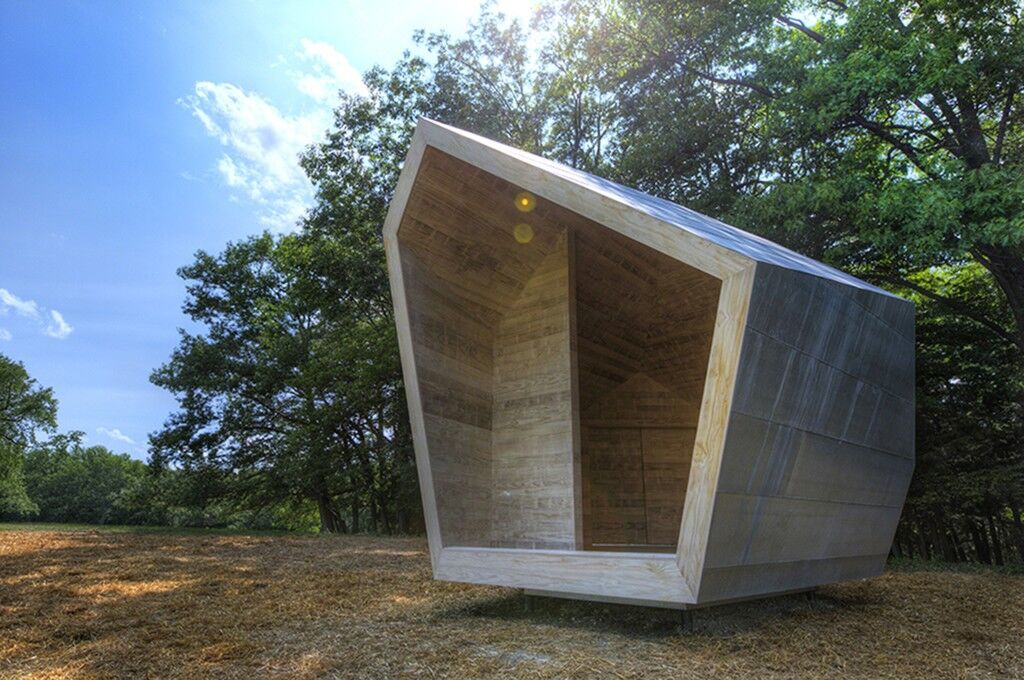 Thomas Schütte
Crystal, 2015
"Thomas Schütte: Crystal" at Clark Art Institute, Williamstown (2015)
A 15-minute drive west, the Sterling and Francine Clark Art Institute—recently renovated by
Tadao Ando
—is playing host to German artist
Thomas Schütte
’s first architecturally scaled structure. Created by the artist specifically for the private museum’s wooded landscape, the interactive wood and steel sculpture is inspired by its namesake form, the crystal, which Schütte reimagined as a faceted, barn-like shelter. Visitors are encouraged to walk through Schütte’s tunnel for a new perspective on the surrounding mountainscape. While you’re there, don’t miss
James Abbott McNeill Whistler
’s iconic portrait, affectionately known as Whistler’s Mother  (1871), which just arrived at the institute this July, as well as the Clark’s excellent exhibition “Van Gogh and Nature,” featuring close to 50 paintings and drawings by the Post-Impressionist, whose expressionistic take on nature activates the Clark’s verdant environs.

Warhol by the Book 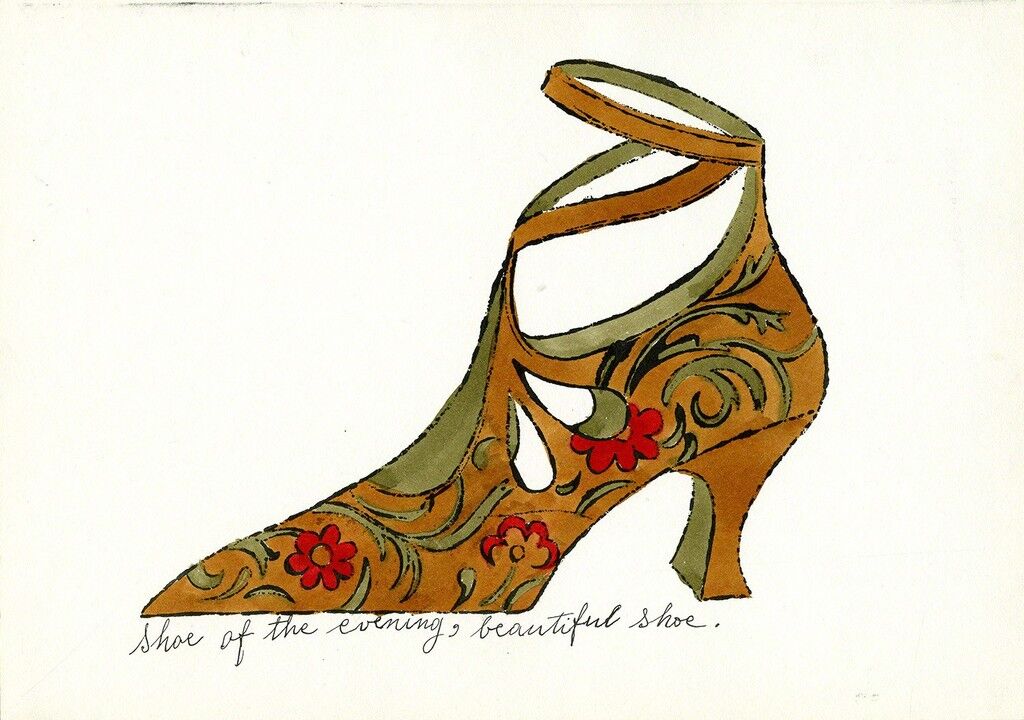 Andy Warhol
Shoe of the Evening, Beautiful Shoe, c. 1955
"Warhol by the Book" at Williams College Museum of Art, Williamstown (2015) 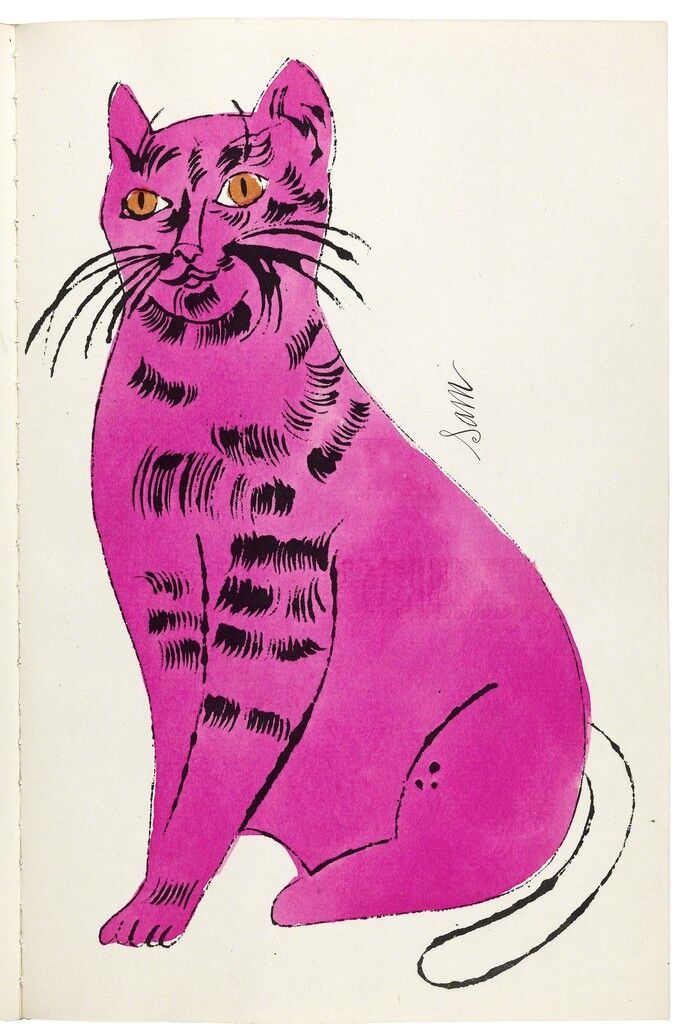 Andy Warhol
25 Cats Name Sam and One Blue Pussy, 1954
"Warhol by the Book" at Williams College Museum of Art, Williamstown (2015)
Only a short drive from the Clark, the college town of Williamstown is unexpectedly buzzing each summer thanks to the Williamstown Theatre Festival, which has been luring actors like Gwyneth Paltrow and Bradley Cooper to Williams College for over 50 years. These intimate seasonal performances are matched by the school’s impressive art museum, which is the current host of an exhibition curated by the Andy Warhol Museum. Titled “Warhol by the Book,” the show examines the Pop artist’s literary obsession through a diverse smattering of his seen and unseen publications. One flip through this eye-popping collection of zines, cookbooks, diaries, and paper ephemera, offers a tightly curated but revealing glimpse into
Warhol
’s
beginnings as a talented commercial illustrator
. 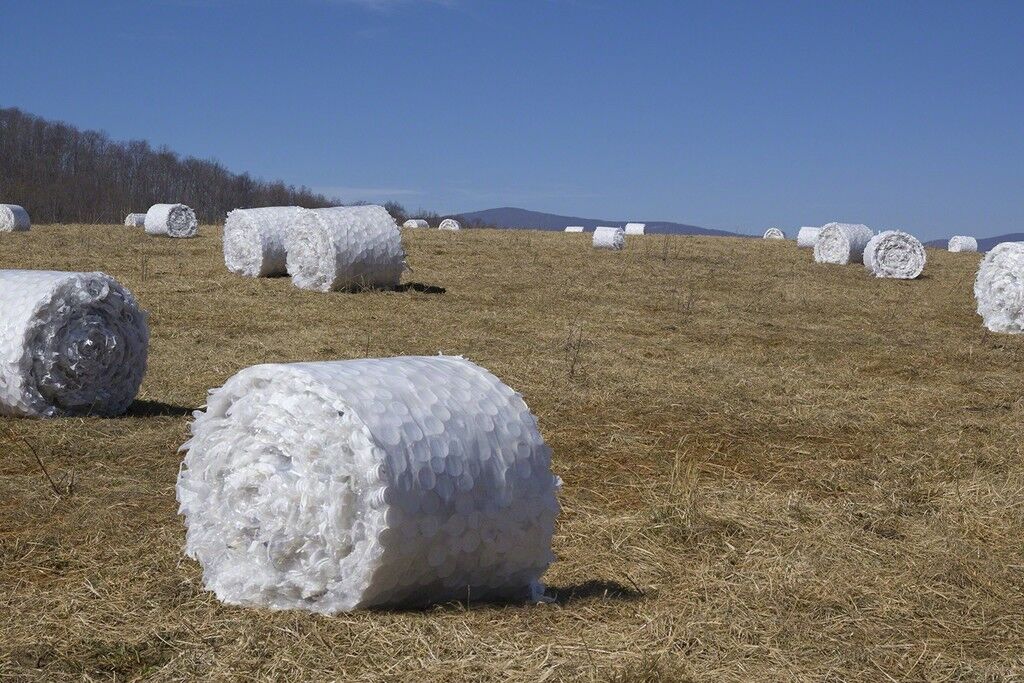 Susie Ganch
Bale, 2014
Sienna Patti Contemporary
Further south, Lenox, Massachusetts, thrives during the summer thanks in part to the legendary Tanglewood Music Festival, which brings acclaimed contemporary classical acts to the rural bandshell. Sienna Patti Contemporary is also well worth a trip. With a focus on jewelry, sculpture, and photography, the jewel-box gallery always shows a rotating assortment of visual treats. This month, artist Simon Cottrell’s industrial jewelry is paired with the wall-mounted sculptures of
Jonathan Wahl
. While this metallic showcase comes down mid-July, those planning a visit in late summer can look forward to the work of
Susie Ganch
—a sculptor who creates textural wall hangings from recycled plastics.
Kat Herriman
Explore Artsy’s guides to art destinations from São Paulo to Paris.
Related Stories 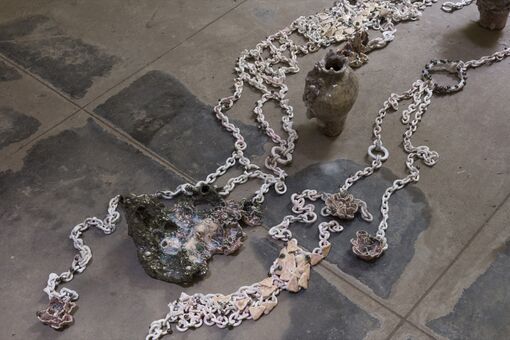