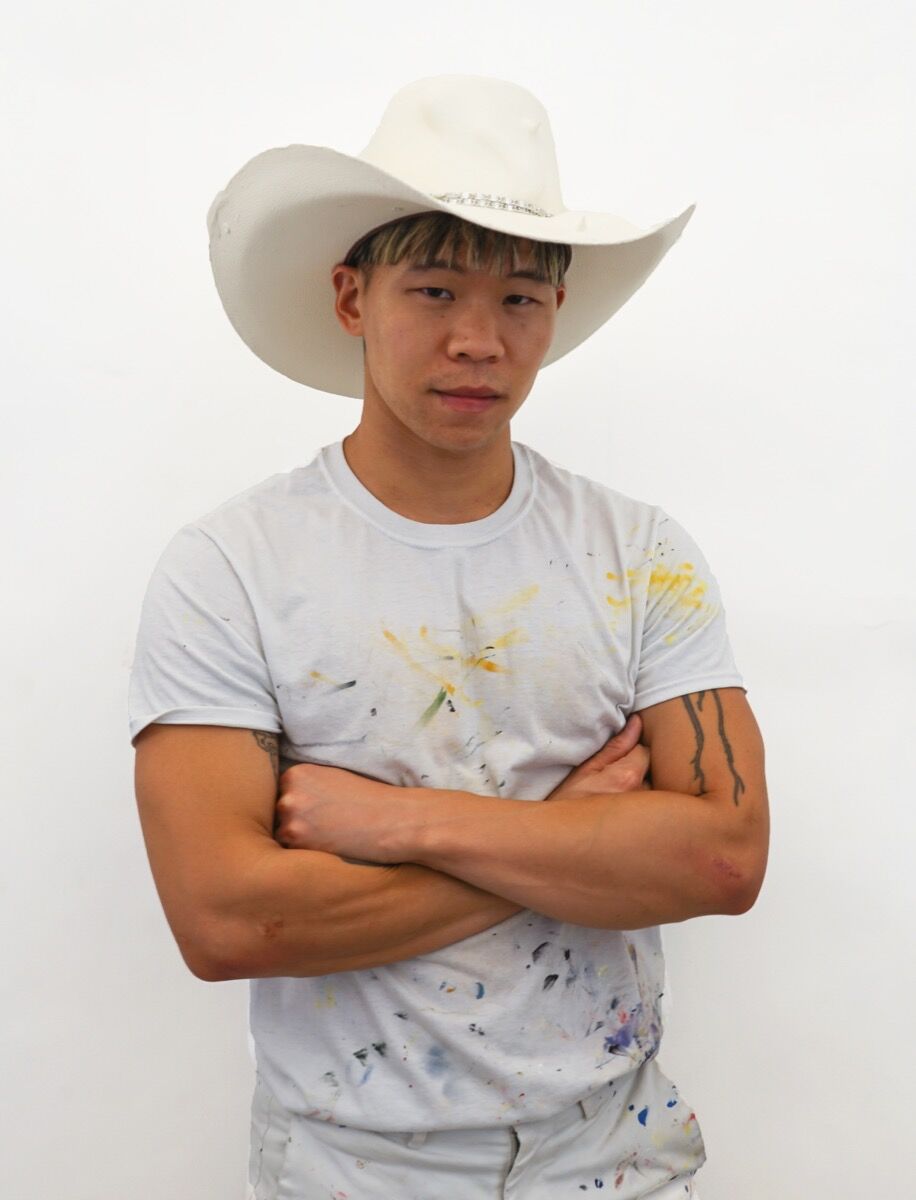 Portrait of Yowshien Kuo. Courtesy of the artist. 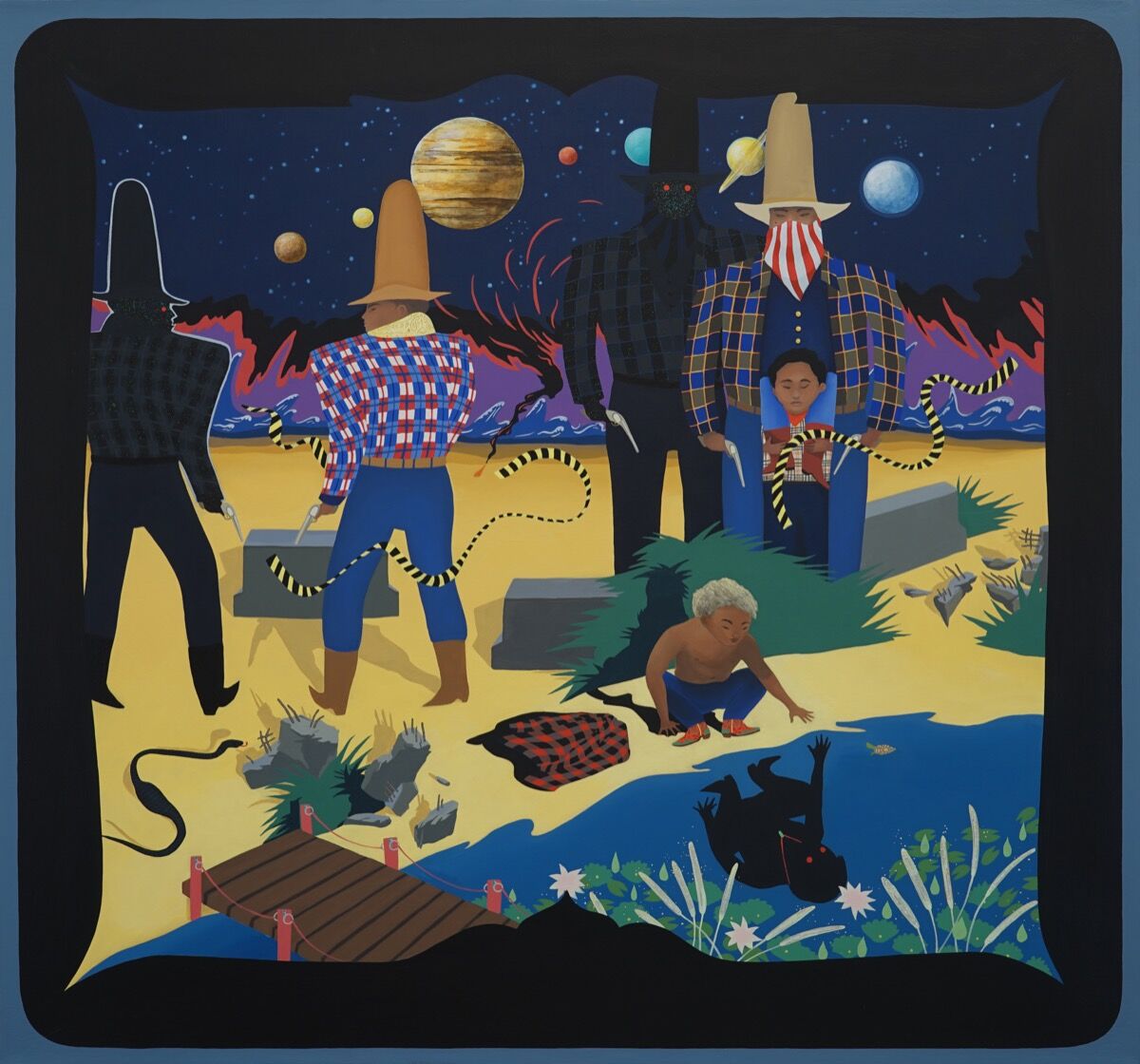 Yowshien Kuo, But Victor Denies the Similarities Between Himself and the Monster, 2019. Courtesy of the artist.

Yowshien Kuo’s paintings are filled with rattlesnakes, gallon hats, and other yeehaw imagery, but there are no white cowboys here. Instead, we see Asian men: shooting guns with their tongues out; wrangling game; or relaxing in their backyards, as horses run wild and an apple pie steams in the window. Kuo complicates racialized stereotypes of masculinity and notions of Americana, using folksy, decorative borders to quite literally reframe our understanding of the past. This month, he opened his first major solo museum show at the Contemporary Art Museum in St. Louis, “Western Venom.”
During the 1800s, an estimated one-third of cowboys were Mexican vaqueros and another quarter were Black. Many frontier towns were built using Chinese immigrant labor, too, but Hollywood depictions of the Old West are whitewashed and emptied of BIPOC. In recent years, the Yeehaw Agenda—think Lil Nas X and the Black Cowboys of BLM—has also attempted to redress this very American history of erasure, restoring Blackness to the Old West. 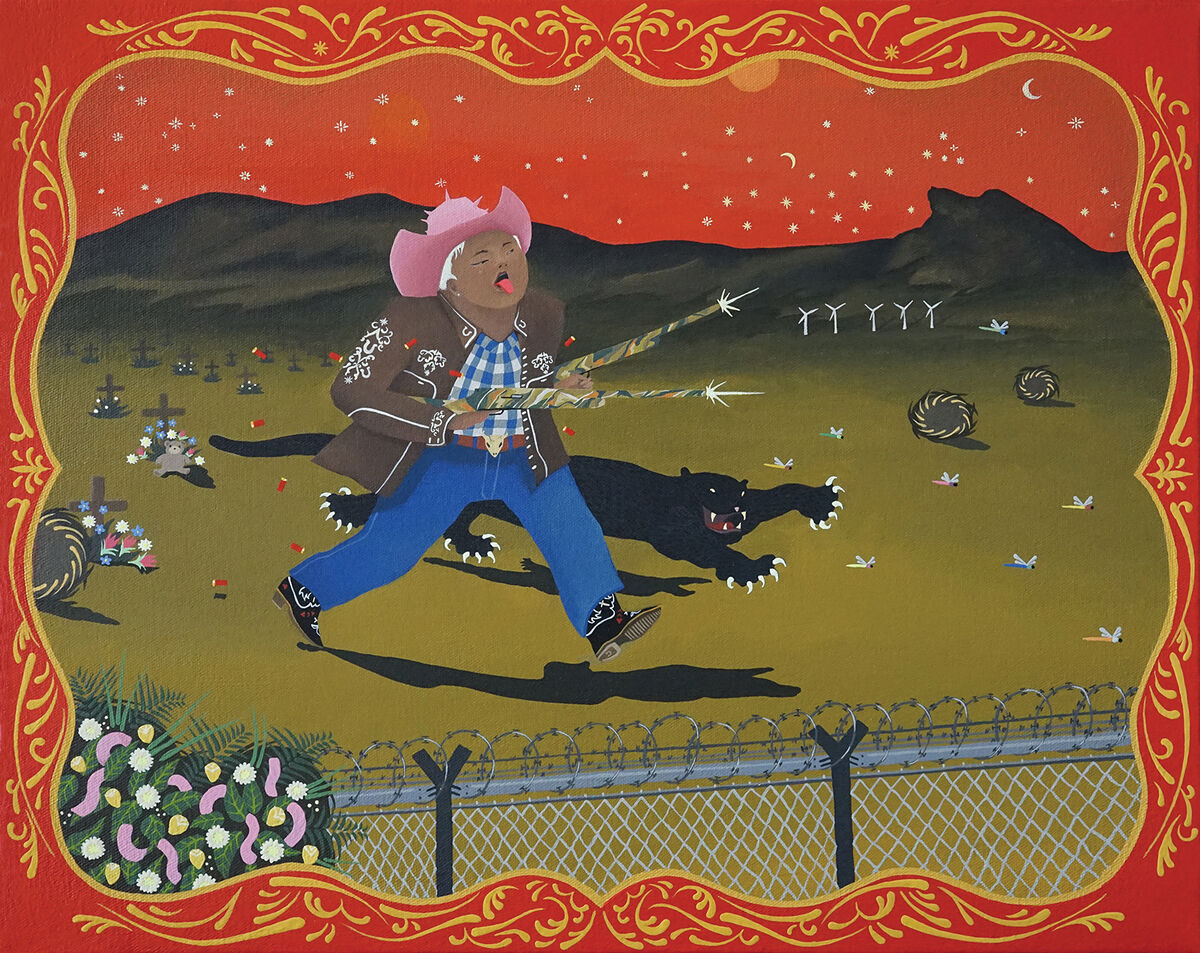 Yowshien Kuo, The People’s Republic of the West, 2019. Courtesy of the artist.

“It goes to where I felt excluded the most,” Kuo explained in an interview over Zoom, pointing to the myth at the heart of American storytelling. Growing up as a minority is always a bifurcated experience—especially for Kuo, who split his time between St. Louis and Taipei. Due to his parents’ busy work schedules, he was essentially in school year-round, but enjoyed the differences of his Taiwanese education. His classes in Taipei included math using an abacus, an experiential countryside biology course, Chinese calligraphy, and life drawing. These lessons would later inform his paintings, such as The People’s Republic of the West (2019), which shows a black panther based on depictions of dragons and flowing movement in Chinese artwork, while paying homage to the Black radical tradition. “It really is Black American art that has inspired me throughout my career,” Kuo said.
Like many 1990s kids, television served as babysitter and cultural educator for Kuo. He cited an episode of the Nickelodeon show Hey Arnold, in which a Korean man becomes a country music superstar. “It’s strange to say that a Nickelodeon show really affected me that way, but to just show that an Asian person who looks like me could be capable of that, even in a fictional setting on television was a really big deal for me.” Cartoons and anime still remain a major influence in the way Kuo constructs his fantastical scenes. 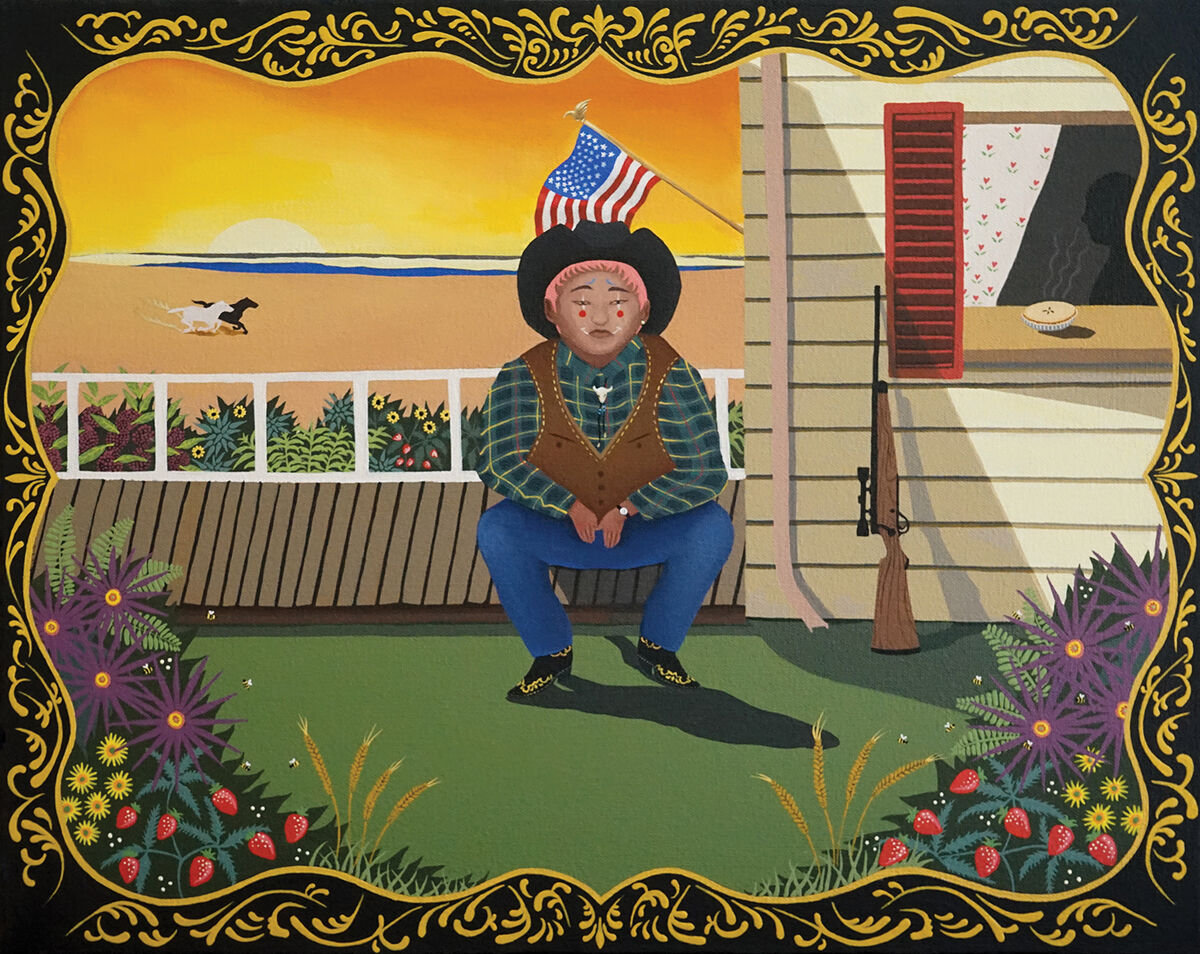 Advertisement
The lower-income, immigrant suburb where Kuo grew up in St. Louis was majority BIPOC but white-assimilationist, and he developed a sense of inferiority. He describes being “intensely embarrassed or ashamed” of his Taiwanese identity, such as when his mother spoke Mandarin with him outside the home. Now 35, Kuo explains that his generation had “no real comprehension of acknowledging diversity or cultural backgrounds. It’s like we just didn’t have the vocabulary to talk about inequity and injustice. It’s taken me a really long time.”
He didn’t truly begin to take pride in his background until last year, while teaching Western art history in Shanghai. But the process began in 2014; Kuo was teaching in Ferguson, Missouri, when Michael Brown was murdered. The ensuing protests, as well as conversations with his students “showed me as a minority that it’s okay to speak out and discuss these things,” he said, “and that was something I was completely blind to prior to that event.” He began to unpick racist stereotypes of Asian men, tracing them back to political cartoons from the earliest days of Chinese immigration. 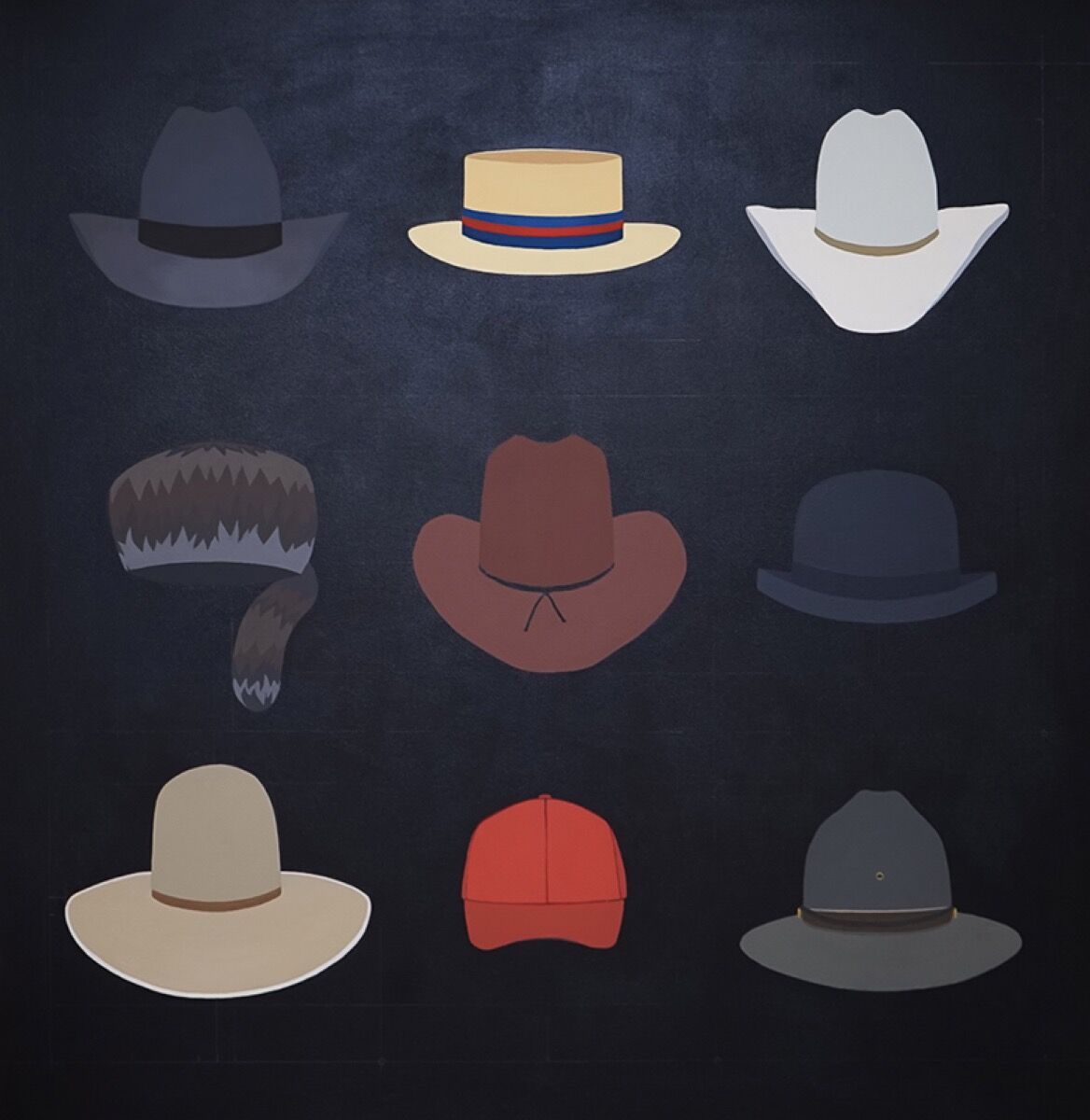 Yowshien Kuo, How the West Was Won, 2017. Courtesy of the artist. 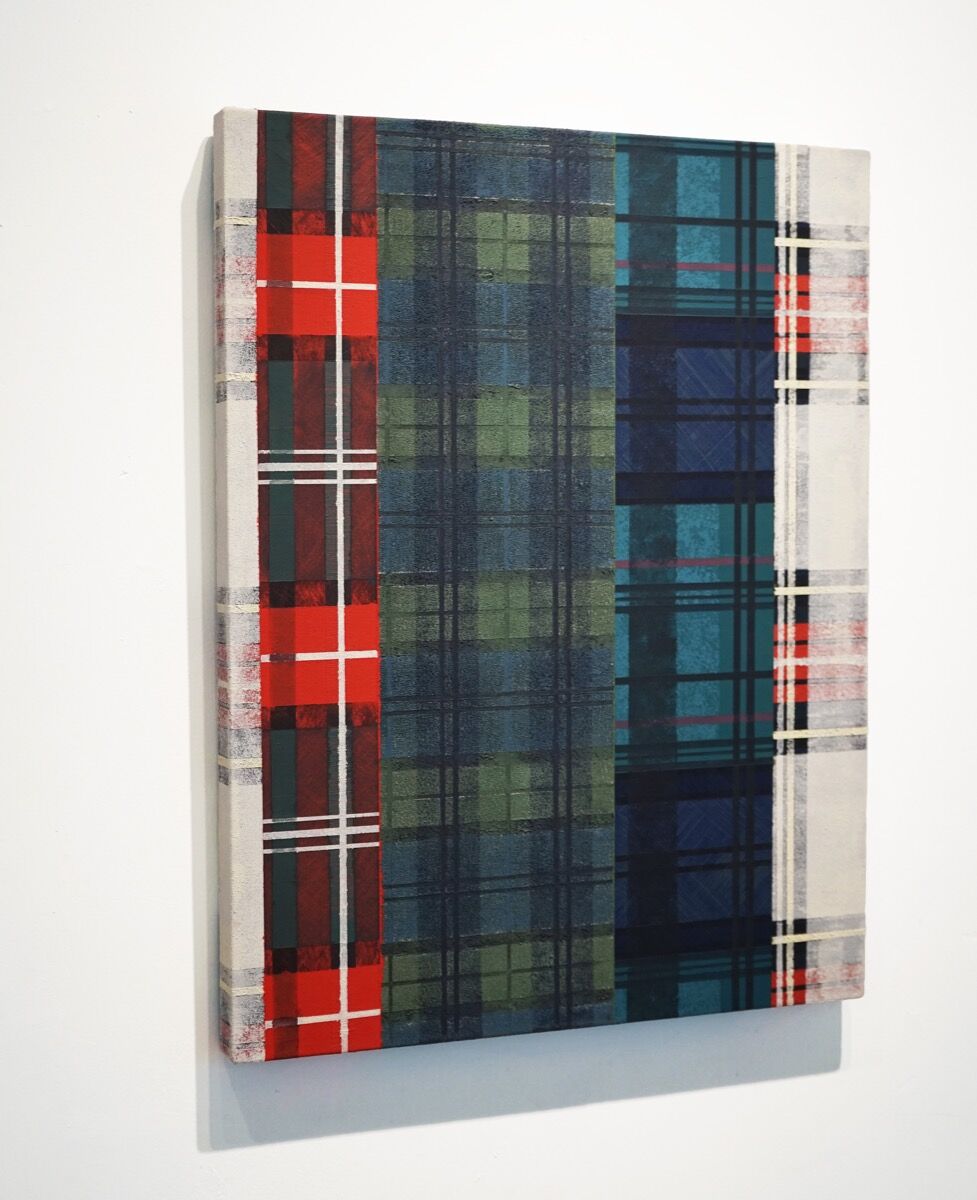 Yowshien Kuo, Cobain to A$ap Rocky from Highsnobiety, 2018. Courtesy of the artist.

Today, Kuo enacts his own erasure throughout his practice, removing the body of the white cowboy. Earlier, this resulted in a visual taxonomy of western garb in works like How the West Was Won V1 (2017). Nine pieces of headgear are arrayed in a neat grid, from Davy Crockett-style coonskin caps and dayglo orange hunting caps, to all manner of cowboy hats, including a bowler. Several paintings feature swatches of plaid patterns, rendered with a slightly faded quality that remarkably invokes the scratchiness of flannel. Titles like Cobain to A$ap Rocky from Highsnobiety (2018) chart the fabric’s changing associations.
Kuo’s peripatetic childhood is referenced in cardboard moving boxes upon which he displays his paintings. Often, elements that are depicted therein later reappear as sculptural forms. “I like the notion of pushing painting off the wall, he explained. “I think it’s important to see painting as something that’s not just pictorial, but as an object.” Some paintings are installed upright in an aluminium stand and exhibited with a hat hung casually on one corner. Sometimes, text or equine imagery is even cut into canvases of artificial grass, with synthetic flowers standing in for his usual borders. For last summer’s Counterpublic triennial, Kuo modified a number of vaquero hats and Western-style shirts, planting them among the other apparel at a Mexican westernwear store, not unlike the historical easter eggs he seeds into his meticulously researched canvases. 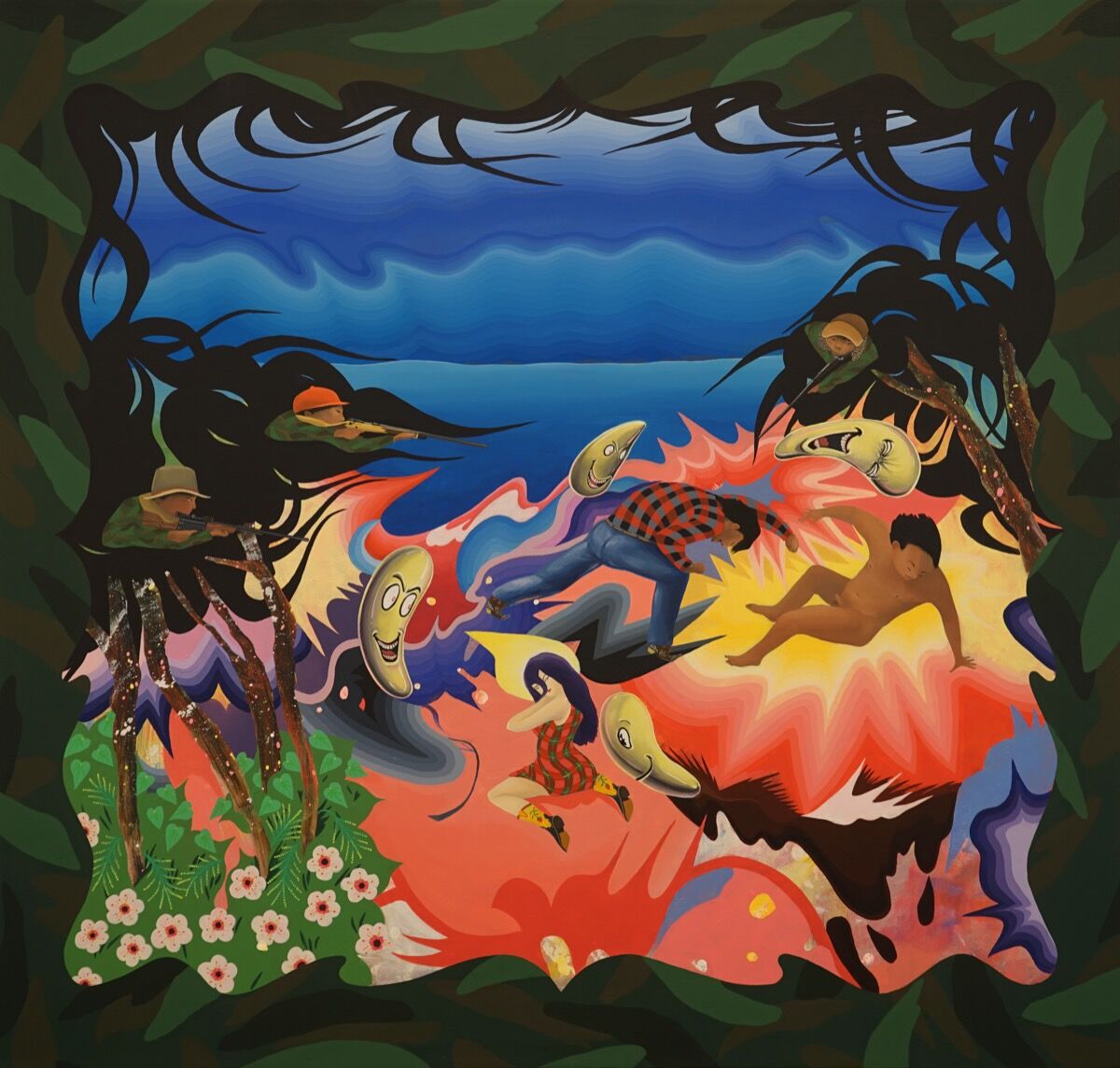 Yowshien Kuo, Slipped in Hope, 2020. Courtesy of the artist. 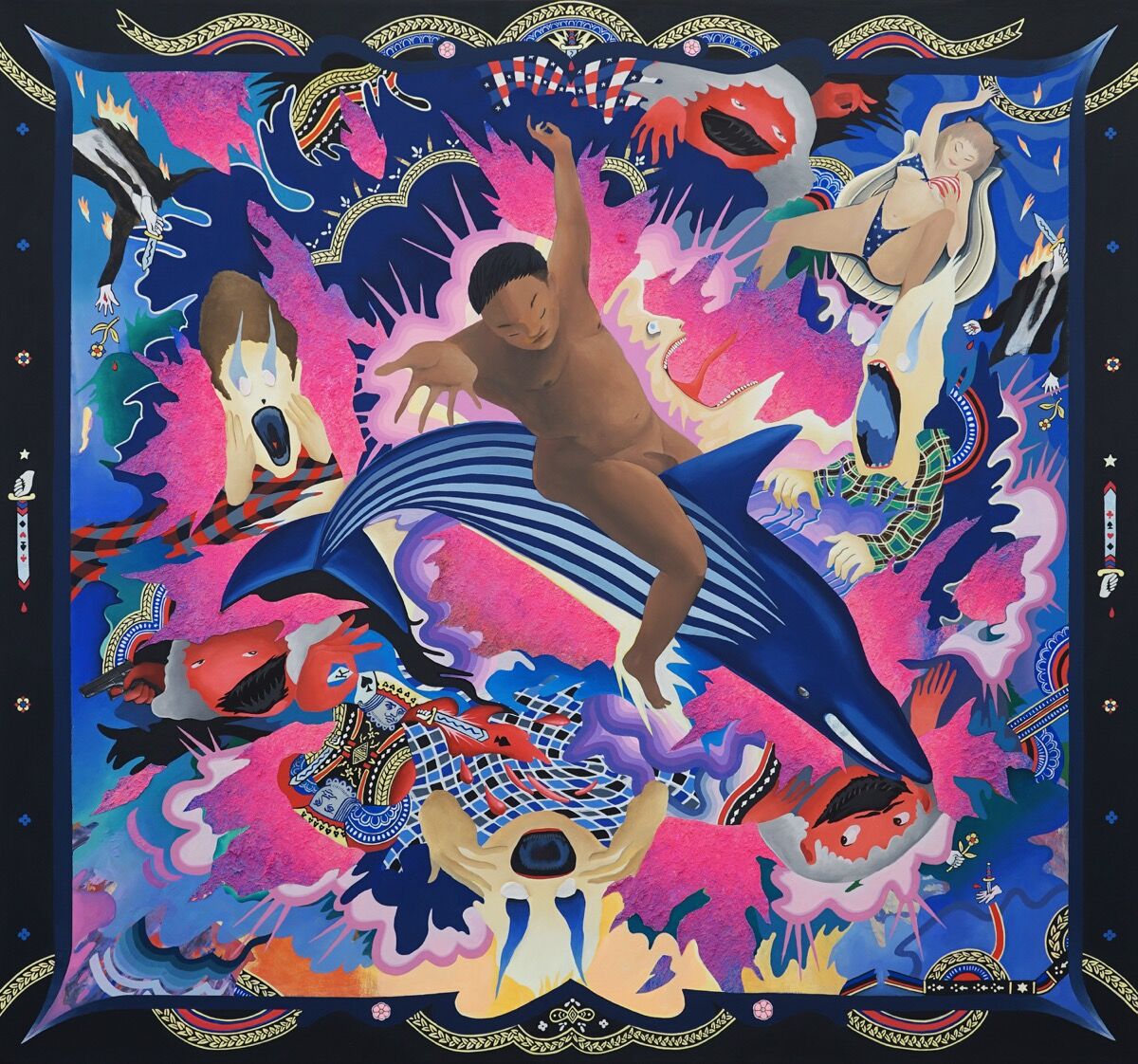 Yowshien Kuo, The Myth of Liberty and Its House of Cards, 2020. Courtesy of the artist.

The newest paintings thrum with an ominous, febrile energy. The palette is darker—night has fallen—and the mythological ante is upped with shadowy demons and maniacally grinning, blobby figures that haunt the pictorial space. Outright representation gives way to more emotionally derived themes—Kuo wants to avoid that familiar BIPOC burden of acting as a cultural translator, saying “I don’t think it’s my job to educate people in that way.”
Most recently, during lockdown, Kuo’s long-standing pedagogical practice and subversions of stereotypical Asian masculinity have collided in a series of Instagram workout videos. He emphasizes the importance of wellness, especially for artists who might have absorbed ideas of having to suffer for your practice—physically, and at the expense of your relationships, too. “I like this notion of sharing my workouts along with my visual arts, to say look, they all are working together and trying to build a conversation,” Kuo said. “We can do these things simultaneously and balance them in the world that we live in today.”
Rahel Aima
Related Stories