Yves Klein’s Legacy Is about Much More Than Blue 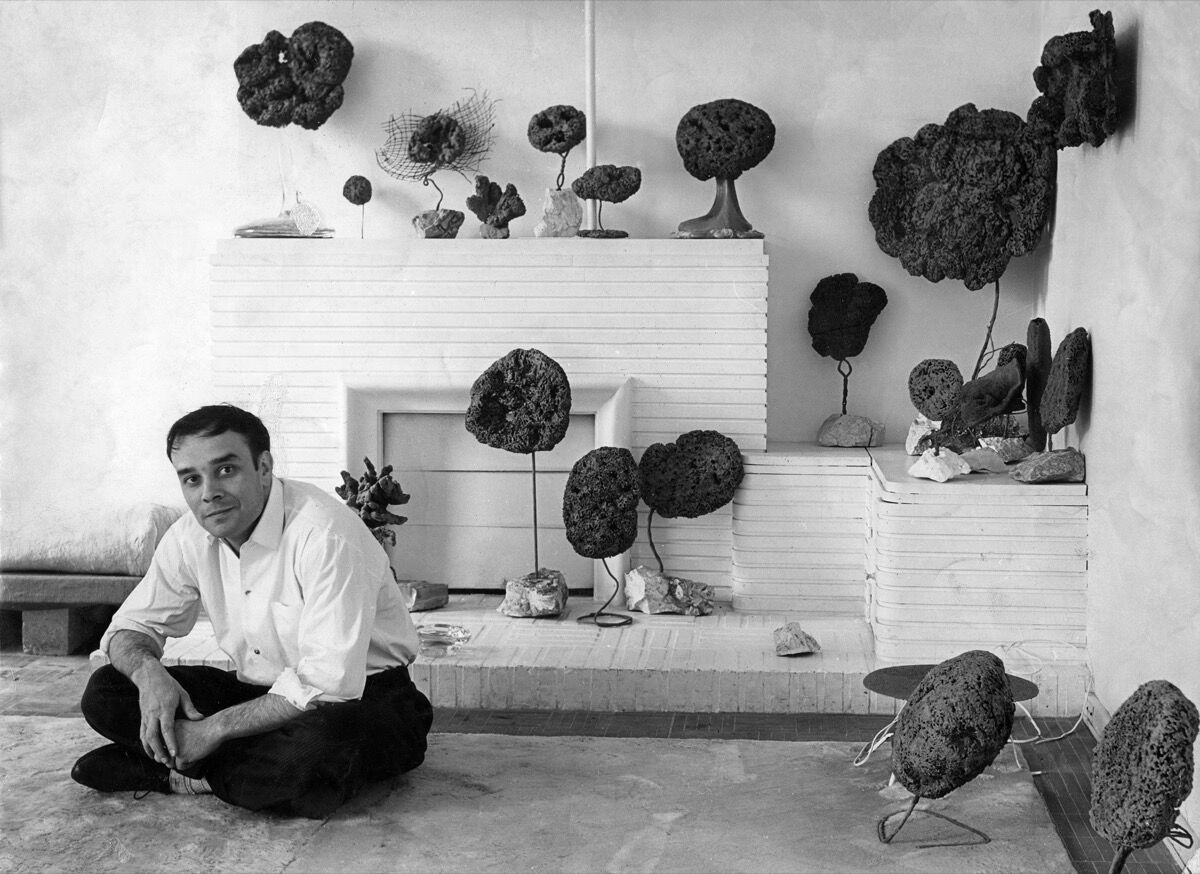 As the story goes,
Yves Klein
’s love affair with the color blue began when the artist was seduced by the deep cerulean skies of the French Mediterranean. “He was obsessed by the luminosity of the blue sky in Nice,” Daniel Moquay, the manager of Klein’s archive and second husband to Klein’s widow Rotraut Klein-Moquay, told me over the phone from France. “He tried to have a blue as powerful as this.” For Klein, color—particularly the most vivid shade of blue—represented a kind of freedom, an antidote to what he saw as the restrictive limits imposed by lines.
Color enabled viewers to “bathe in a cosmic sensibility,” Klein said. He would sometimes refer to the literary critic and philosopher Gaston Bachelard, who wrote: “First there is nothing, then there is a deep nothing, then there is a blue depth.” Discovering, in collaboration with a chemical retailer, a polymer binder that could fix his blue pigment so that it didn’t lose any of its intensity on the road to becoming paint, Klein dubbed the shade International Klein Blue (IKB) and set about making objects of various forms with it: textured canvases, sculptures composed of sea sponges soaked in pigment, horizontal fields of the powdery blue substance.
Although he called his blue canvases “monochromes,” and they were indeed cast in a single color, it was the rich variations of effect these works create when you sit with them for a while that interested Klein, according to Dominique Lévy, the dealer of his estate in North America. They are an “opening to the infinite possibility,” she says. “It’s about all the light and all the color depending on how you place yourself, how you position yourself.” 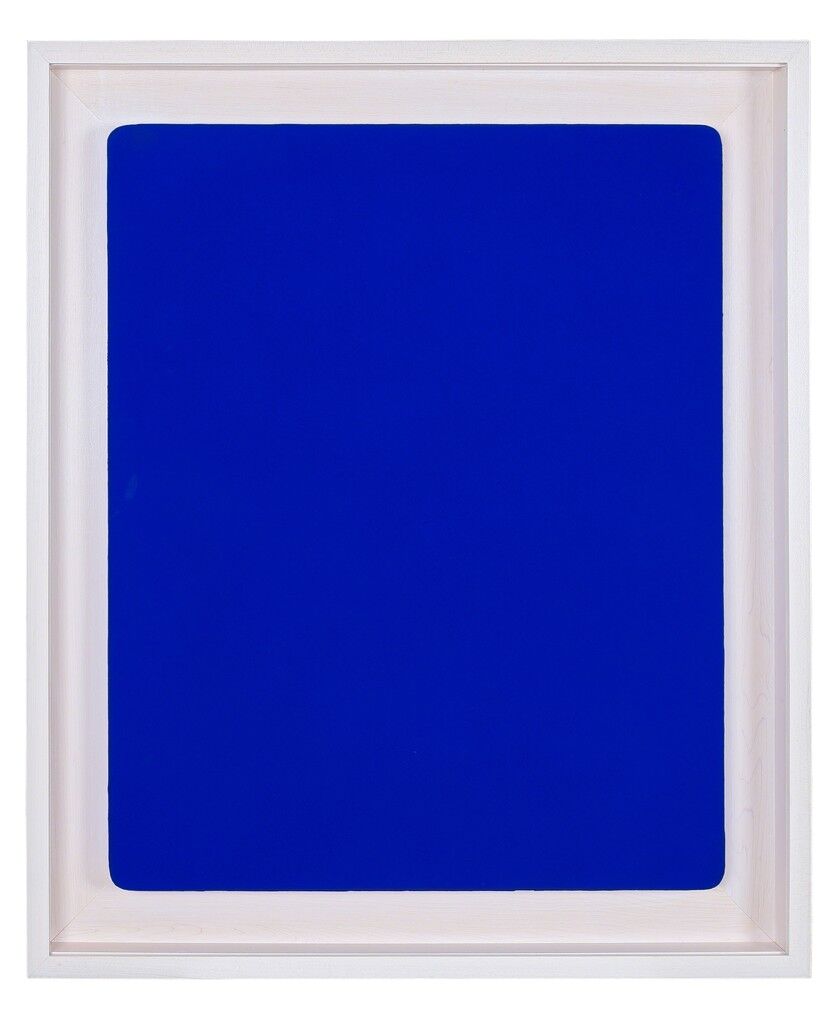 Yves Klein
Untitled Blue Monochrome (IKB 241), 1960
Lévy Gorvy
Blue is also inexorably associated with Klein because it was a likely cause of his untimely death from a heart attack in 1962, when the artist was just 34 years old. “He got lucky because there was a new chemical, a paste which didn’t change the pigment, but really gave the pigment the richness of it and nothing else,” Moquay says of Klein’s pigment fixer. “What he didn’t know was that those types of chemical were difficult to breathe.” He cites
Niki de Saint Phalle
as another French artist who suffered from using plastics.
Yet Klein was a much more complex, controversial, and often contradictory figure than this singular legacy suggests. To focus exclusively on his blue objects, for instance, would be to miss what was for many his most preposterous work: “The Void,” a 1958 exhibition in which he presented the empty interior of a gallery and nothing else. “People thought it was a joke,” Moquay says. “But the void is something extremely important.” Klein also made abstract reliefs of planetary surfaces; compositions using fire, for which he burned his canvases with flames; and his “Anthropometry” performances, in which nude female performers covered themselves in blue paint and imprinted their bodies onto white canvases in front of live audiences. He was also a lover of pink and gold (evoking the gold and rosy cross of Rosicrucianism, a faith that Klein felt a strong affinity to, alongside his received Catholic faith).

Advertisement
“The Void,” in particular, conveys something of Klein’s interest in Eastern philosophy, cultivated during an early trip to Asia when he trained to become a master of judo, his first love. A concern with emptiness and the disavowal of the self—central tenets of Zen Buddhism—pervades many of his works, not least his Monotone-Silence Symphony (first performed in 1960), a performance in which an orchestra plays a single note for 20 minutes, followed by a 20-minute period of silence, to a large audience. Remarkably, despite the resonance with
John Cage
’s 4’33” (1952), there is little evidence to show the two artists were aware of each other.
“People ask why we don’t put it on the internet,” says Moquay of Klein’s symphony. “We’re not talking only about the song, we’re talking about the silence. It’s really something—to be with a community for 20 minutes of very deep silence. When you get to 10 minutes, when you have saliva going through your throat, it makes a noise. Suddenly you are meditating with hundreds of people.”
For Lévy, Klein’s monotone sounds relate to his monochrome compositions in the way that they call on listeners and viewers to find the nuances and variations in a single note or hue. “When you hear all these instruments playing, you forget that it’s a monotone,” she says. She sees in Klein’s work resonances with today’s obsession with transcendental meditation, which is based on 20-minute periods of silent introspection. “I see how relevant he is today because of his atemporality,” she says. “It’s nothing to do with the self. His work is much more existential, sublime, meditative.” 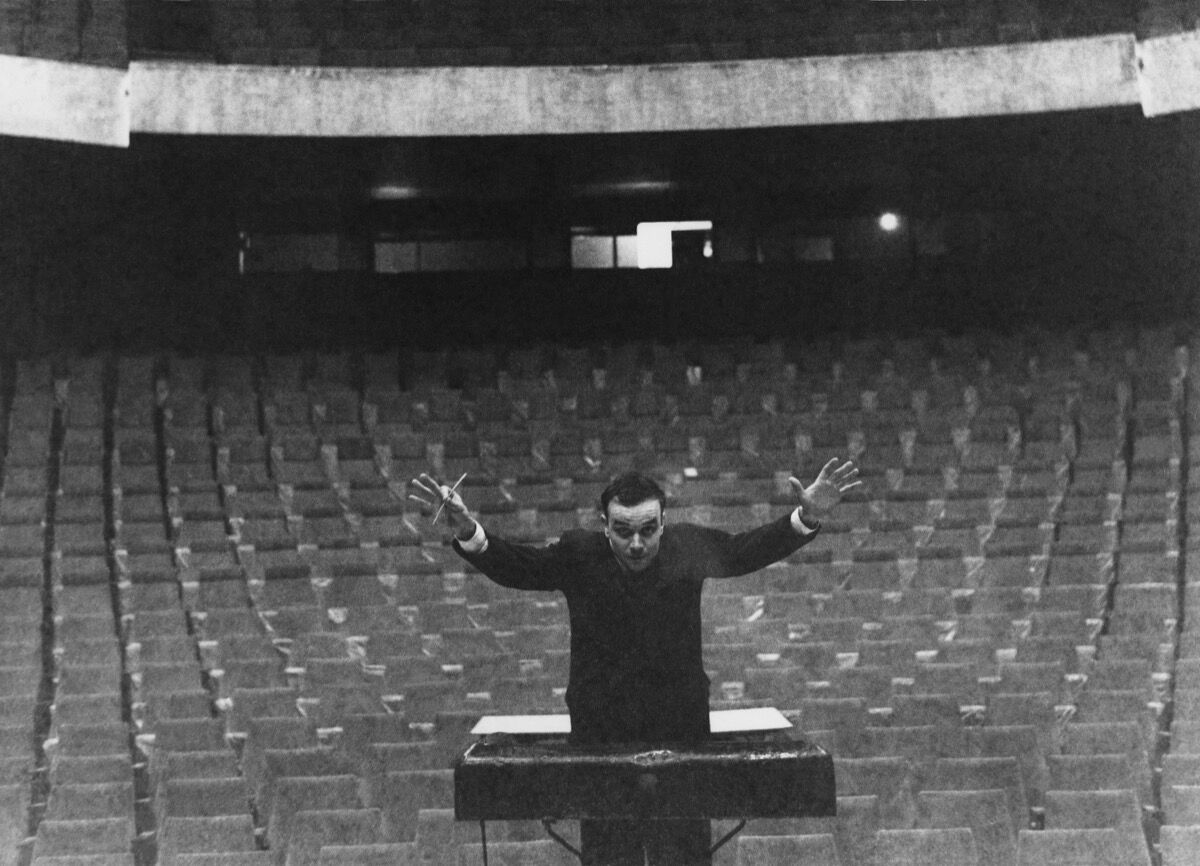 Yet for all of Klein’s interest in the selflessness of Eastern philosophies, and his explicit advocacy of artists moving away from art as self-expression, it’s hard not to read a certain egotistical flair in the branding of a shade of blue with his name. Moreover, there is a muscular virulence to the way Klein talked about his work. He referred on several occasions to his role as an artist in inseminating the world with his sensibility. When the Russian cosmonaut Yuri Gagarin described the earth’s blueness as seen from outer space, Klein declared that he had saturated the whole globe with I.K.B. His blue sculptures, he said, were portraits of the viewers who, “having voyaged in the blue of my pictures, return totally impregnated in sensibility, as are the sponges.”
The use of nude female models as sensual instruments in his “Anthropometry” performances has also provoked feminist criticism, though one of his models reported that she was respectfully treated throughout and was honored to participate in the work. The performances can arguably be read not as action paintings in which women become passive instruments, but as performances in which creator (in this case Klein’s female performers), artwork, and audience become one. “Bodies transcend bodies,” Lévy says. “They’re more about abstract shape.” 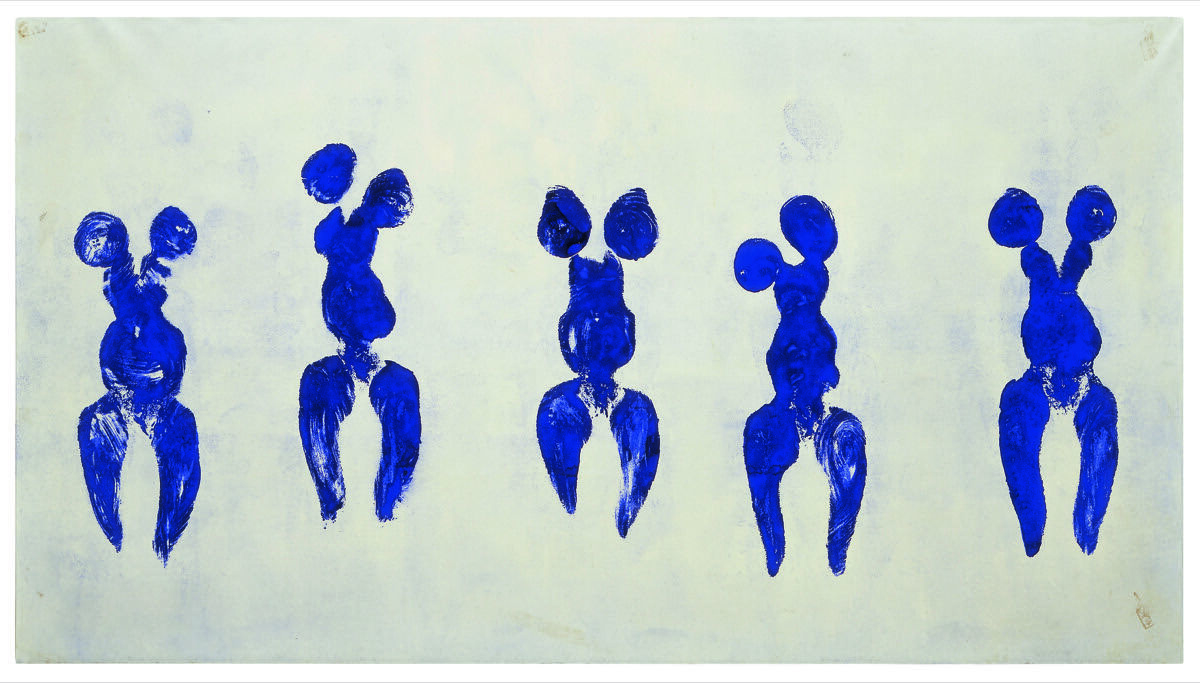 One can see how Klein—with his interest in the perfect gestures of judo, his devotion to the Christian faith (with its belief in the sacrament as a form of worship), and his concern with Eastern philosophies—came to insert real human bodies into his work. “Judo helped me to understand pictorial space and the discovery of the human body in a spiritual space,” Klein once said. In his short career, however, Klein would begin to move away from the physical realm altogether. While his intense blue canvases with their curved edges were intended to disappear or recede into space—an effect that has prompted some to consider Klein a forerunner to
James Turrell
—his “Immaterials” did away with the object entirely.
When Klein traveled to America in 1962, he gave an “Immaterial” to the artist
Ed Kienholz
, who later wrote about the work and his meeting with the French artist. “An Immaterial is a very difficult work,” he wrote. “In its final distilled aspect, it is probably pure art because nothing physical exists.” Klein would collect money from the buyer of an “Immaterial” in exchange for a receipt. Klein, as Kienholz has it, “would then divest himself of the money by ‘throwing the gold,’ which meant actually…dropping it in the ocean from a boat, etc. The buyer-collector then completed the gesture by burning the receipt so that artist and owner each had nothing but the art experience.”
Klein would pass away later that year, before throwing Kienholz’s gold, but his widow Rotraut would complete the “Immaterial” on behalf of her late husband. Klein’s disavowal of the physical world—and his early departure from it—would ultimately become crystallized in his image Leap into the Void, a manipulated photo shot by Harry Shunk in 1960, in which the artist appears to take a triumphant dive off the side of a building into empty space. The image was distributed around Paris on the cover of a fake newspaper. 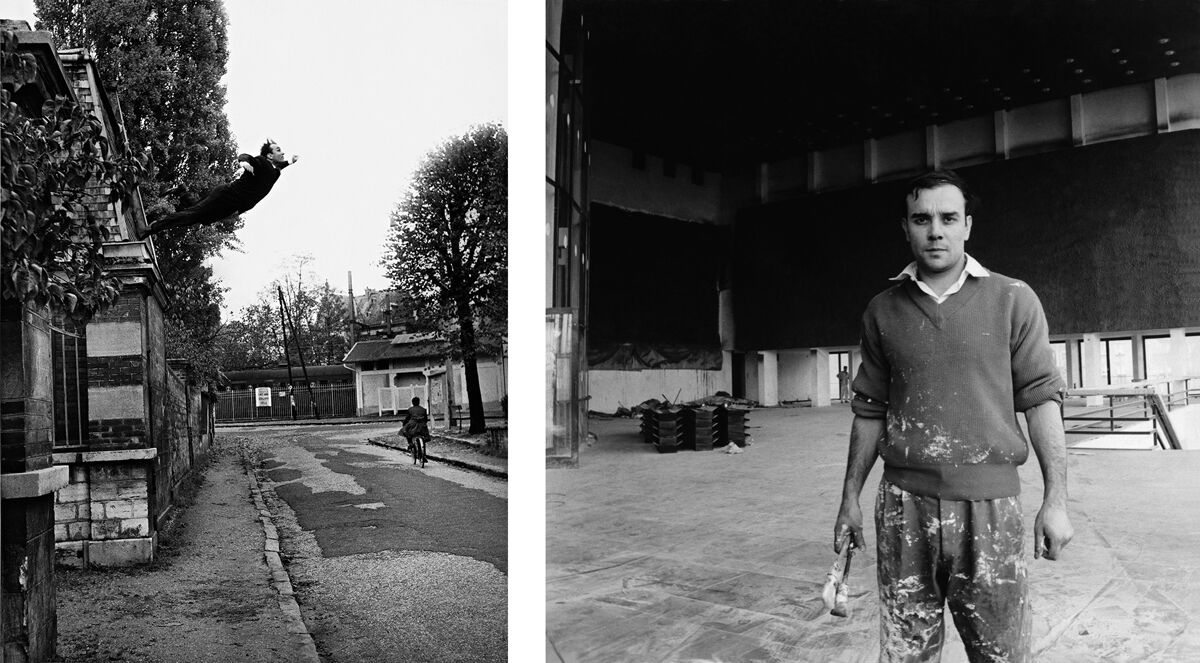 Whatever you make of Klein—mystic or self-marketer, visionary or trickster—he was a passionate and bold artist, who helped to break down the division of art and life. And as Peter Schjeldahl has pointed out, he kept Paris on the art-world map at a time when the center of gravity had shifted to New York. He “rescued French art from an insular preciousness into which, but for the brawn of works by
Jean Dubuffet
, it had sunk after the Second World War,” Schjeldahl writes.
While Japanese collectors and museums have displayed a strong interest in Klein’s work, U.S. interest is relatively behind, Lévy claims. “He’s not yet completely understood,” she says, “especially the magnitude of his revolution. He worked with performance and sound before a lot of American artists.” She cites
David Hammons
as one of many contemporary artists who have been influenced by Klein.
It is perhaps the great irony of his legacy that Klein has become associated primarily with a material pigment, when he was concerned first and foremost with cosmological space—the experience of Earth’s expansive blue sky. “He is not a painter,” Moquay says. “He is someone who had a vision of life that is completely different. It takes time for you to realize and you agree that why not—maybe he is right. Maybe we do not live our daily lives exactly as we should.”
Tess Thackara
All artworks © Yves Klein.
Related Stories