ZERO, the 20th-Century Art Phenomenon You Didn’t Know About Until Now 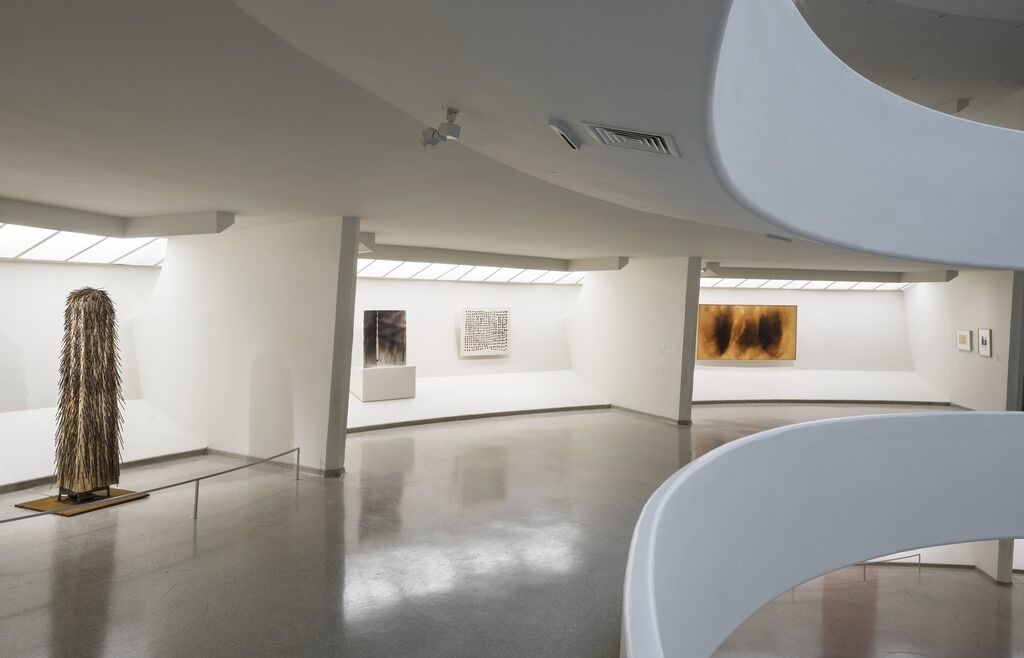 Lucio Fontana
’s sliced-up canvases,
Yayoi Kusama
’s “Infinity Nets,”
Yves Klein
’s fire paintings—these game-changing works of art are considered part of the post-World War II phenomenon ZERO, and they can all be found surrounding the Guggenheim’s prestigious rotunda this fall as part of the exhibition “ZERO: Countdown to Tomorrow, 1950s-60s.” A 20th-century transnational network of artists, the individuals known as ZERO developed a lexicon of tendencies, techniques, and tenets that diffused into artistic centers from Japan to Brazil during the 1960s and ’70s, and impacted the course of modern and contemporary art. Now, for the first time, these artists and their works are reexamined in a large-scale exhibition in the U.S., and it takes place in New York, one art capital that can’t lay claim to fostering ZERO’s genius. While the extensive and compelling narrative behind the network fills the Guggenheim uptown—from a slideshow of archival images on the ground level to a historic Light Room in the uppermost gallery space—downtown, a quieter exhibition at De Buck Gallery in Chelsea distills ZERO down to its impressive Italian set. 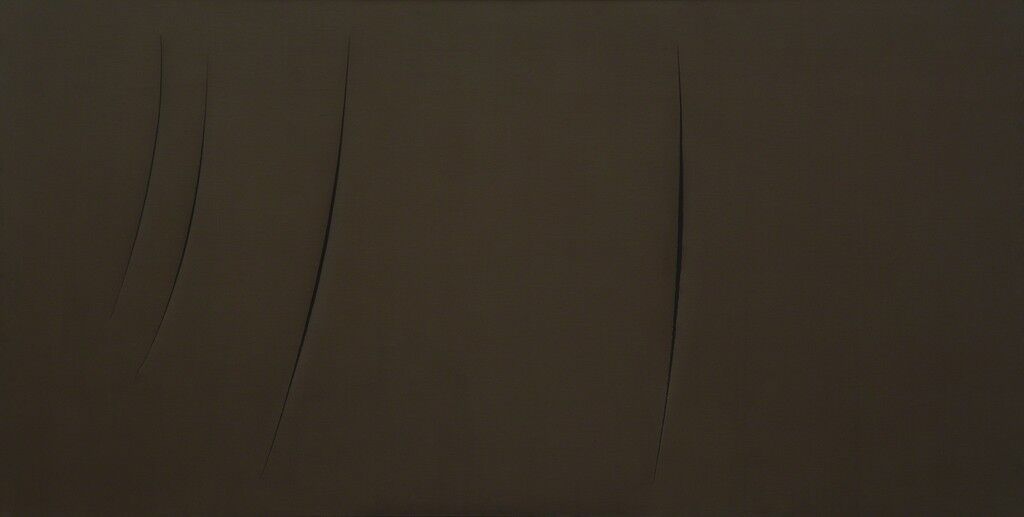 Lucio Fontana
Concetto Spaziale, Attese, 1959
Guggenheim Museum
The origins of ZERO trace back to the
Zero Group
, which was conceived by two lesser-known artists,
Heinz Mack
and
Otto Piene
, in Düsseldorf in 1957, beginning with nine one-night exhibitions and a series of publications; in 1961
Gunther Uecker
joined their ranks. Zero became their moniker because, as Piene explained in a 1961 text, it denotes “a zone of silence and of pure possibilities for a new beginning as the countdown when rockets take off.” 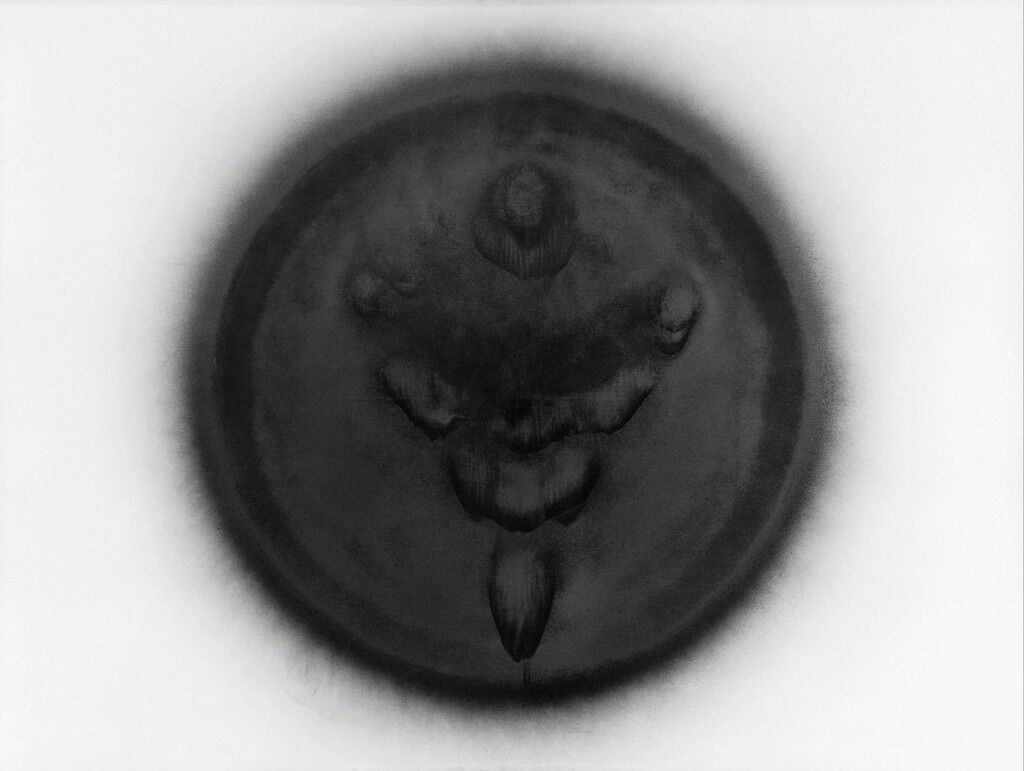 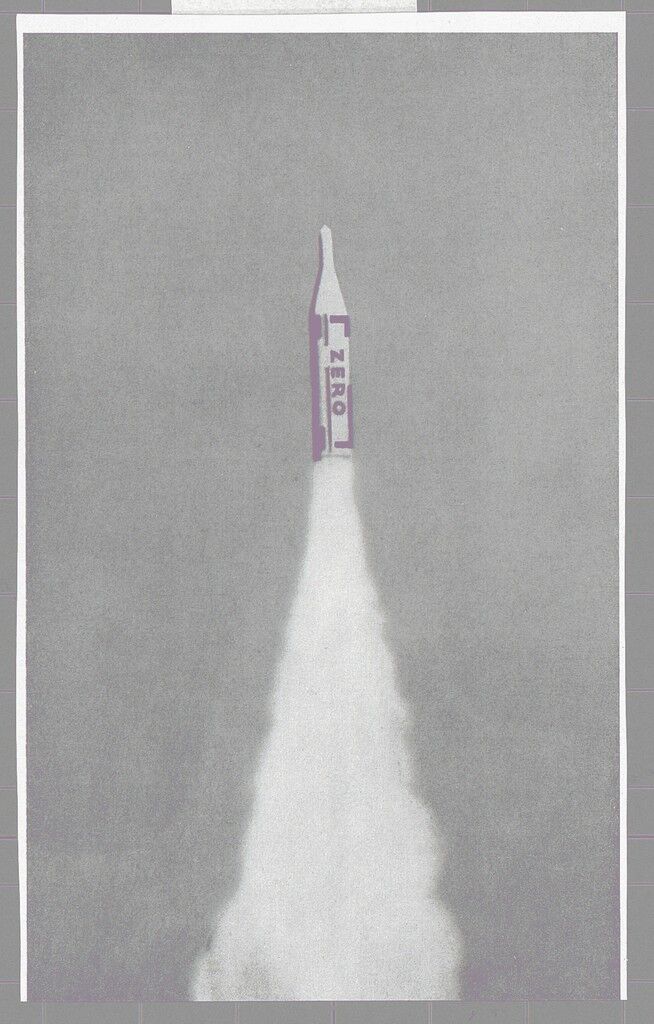 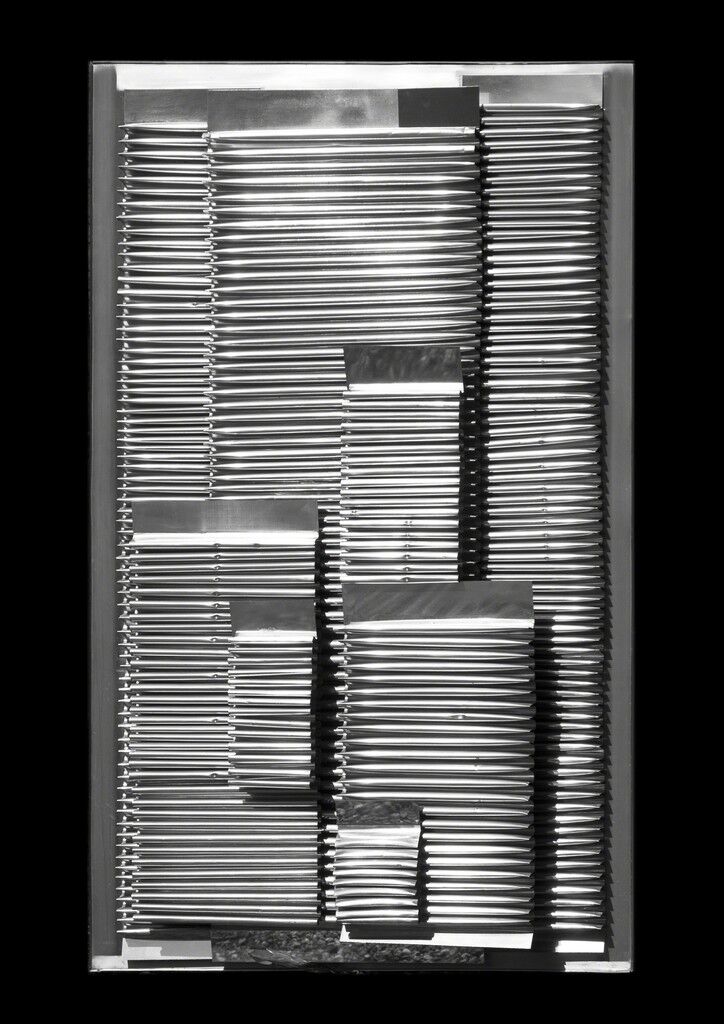 Heinz Mack
New York, New York, 1963
Guggenheim Museum
Advertisement
Inspired by postwar optimism, the trio rejected the tendencies of European art at the time, particularly
Art Informel
and Tachisme, and conceptions of art as a channel for self-expression and spontaneity. Instead they developed a language that discarded the hand of the artist and, rather, focused on the manipulation and destruction of materials; simple, monochromatic palettes; and the use of unconventional materials like sand, nails, and aluminum, with the aim of imagining movement and vibration. Later, the Space Age would play a major role, as would the use of light—evident in Piene’s immersive 1969 Light Ballet and his plans for a silvery civilization in the Sahara, which bears an unmistakable likeness to something thought up by George Lucas. 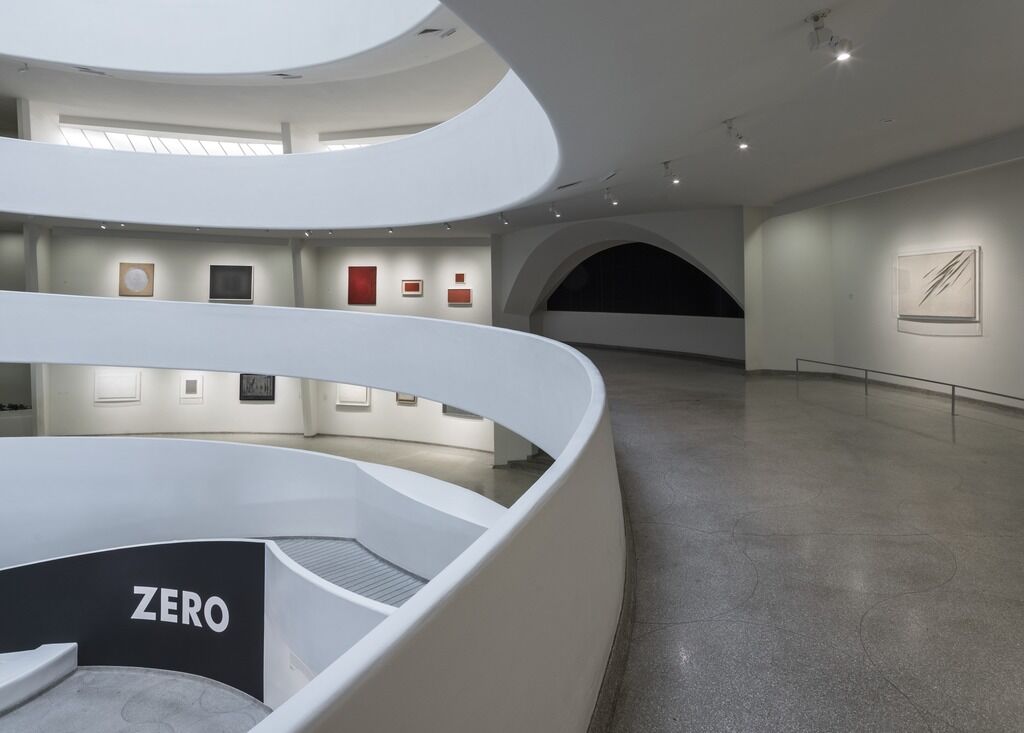 While the Guggenheim exhibition balances the Mack-Piene-Uecker axis against a slew of international artists—who were working in similar veins or driven by similar impulses at the time, directly or indirectly inspired by the Zero Group—at De Buck Gallery, “A New Visual Dialogue” delves into the Italian ingenuity associated with ZERO, homing in on seven artists who were part of the group’s nucleus in Italy. The exhibition will travel to venues in Saint-Paul de Vence and Antwerp following its New York run, which is especially fitting given the group’s transnational nature. 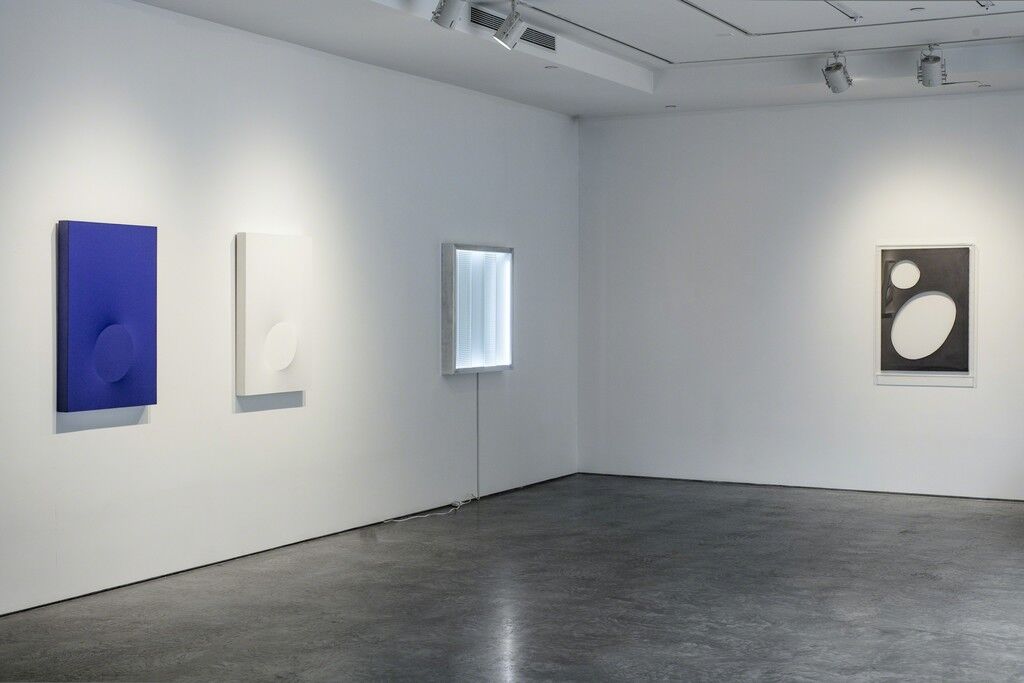 Upon entering the Chelsea space, one gravitates towards the exhibition’s point of departure, Lucio Fontana’s arresting Concetto Spaziale: Attese (1959), a classic example of his investigations into light and space through breaking the picture plane. Realized in shades of chartreuse and olive green with several iconic vertical cuts, the work corresponds with a larger monochromatic one on view at the Guggenheim. In the show’s catalogue, Elena Forin notes that Fontana was a touchstone for the show’s younger generation of Italian artists, individuals who, she explains, “comprehended the power, the importance and the profundity of his words, as well as the ground-breaking value of his works.” Fontana’s inventive spirit is a resounding force through the exhibition—from
Dadamaino
’s “Volume” works, precise black canvases cut with gaping holes, to
Pino Pinelli
’s dynamic transformations of material and pigment—as is the cultural zeitgeist of 1960s Milan and other cultural hotbeds across Europe. 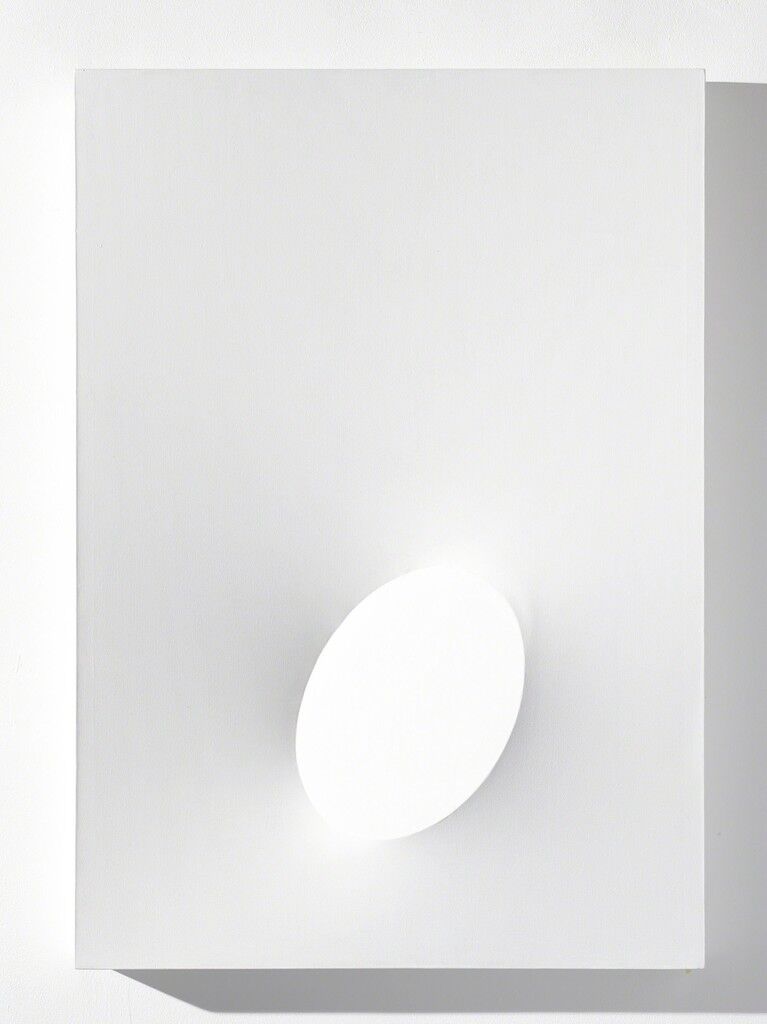 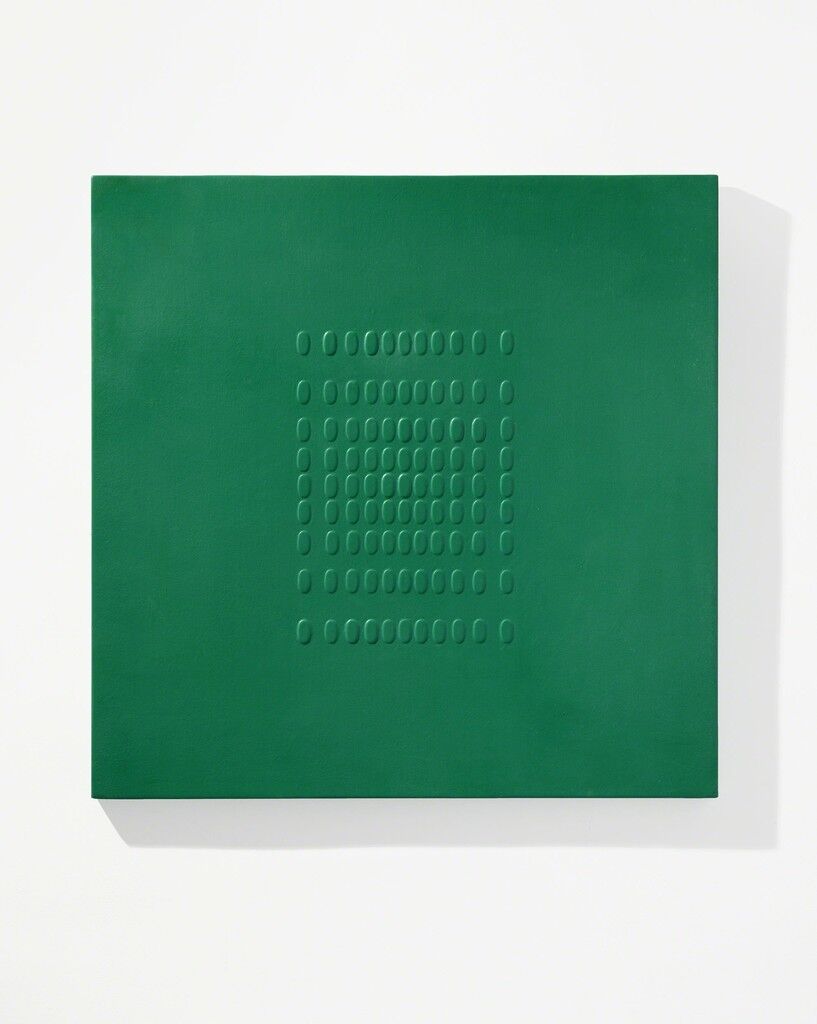 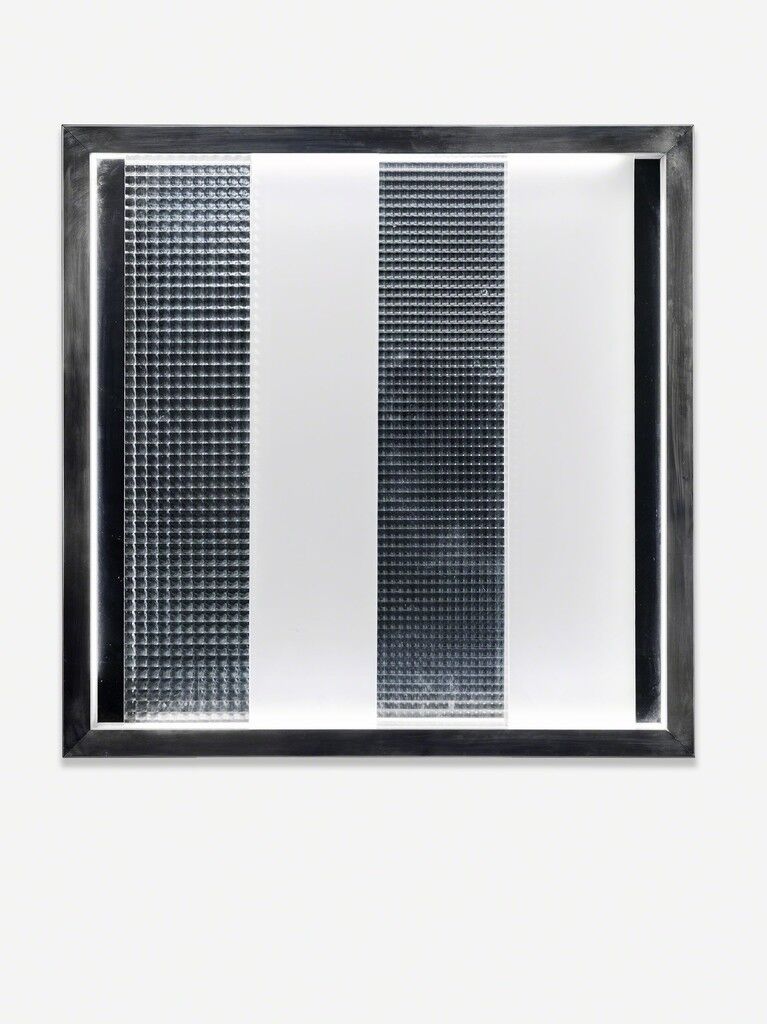 Nanda Vigo
Cronotopo, 1967
De Buck Gallery
Interactions of light and space are evidently and intriguingly considered in divergent works by
Nanda Vigo
,
Alberto Biasi
, and
Turi Simeti
. Vigo’s Cronotopo (1967), a spare construction made from panels of glass and mirrors, a metal frame, and a lighting element, is representative of her investigations into the links between time and space. Playing with reflection and transparency, both of which change depending on the viewer’s vantage point and the environment where it is displayed, the work is a glowing, optical vision. Perhaps most successful at optical effects, though, are the works by Alberto Biasi. These mesmerizing, layered compilations of PVC board, cut into thin strips and applied over a swirling composition of black-and-white lines, challenge the viewer’s perception. These works, like White Rain (1993), also change with movement, engaging with kinetic art. Alternately, Simeti’s works, marked by the use of small oval forms, challenge the resilience of the painted canvas. In his works these oval forms push through the picture frame, creating new planes to reflect light. Literally pushing material limits, works like Forma (1968) appear to capture a force behind the canvas, which is eager to break through its surface and test its constitution. 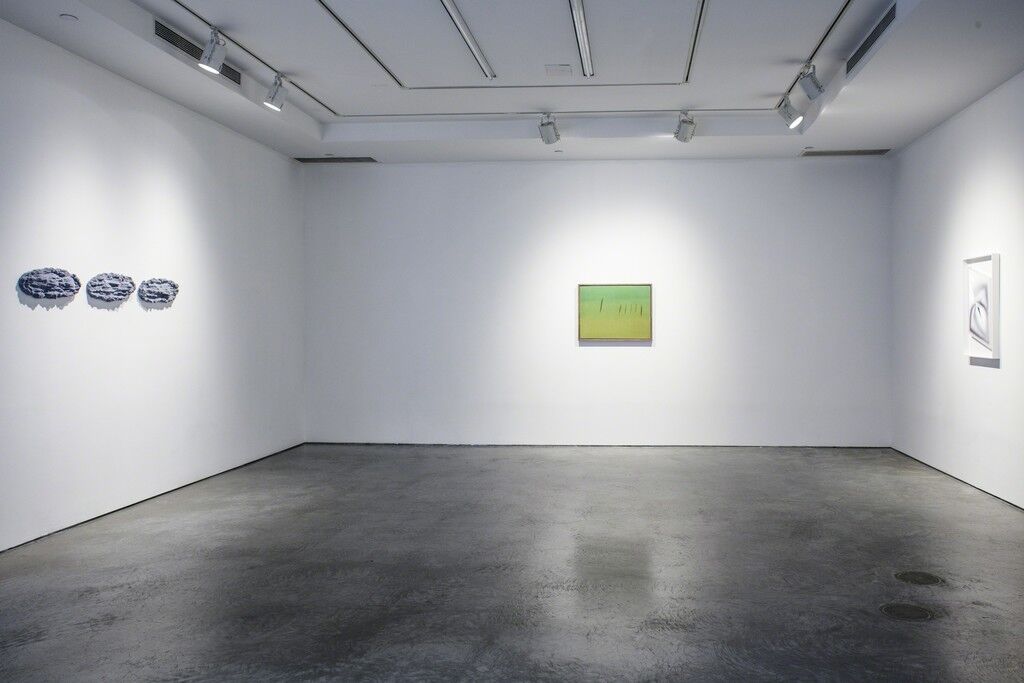 Discarding the canvas and the picture plane altogether is a tendency embraced by several of the artists, including Pinelli. In a method that recalls the pigmented works of Yves Klein, and in an effort to resolve the anxieties of painting, Pinelli crafted resin forms, then covered them with pigment. These organic, wrinkled, and rippled forms exist in pairs and trios, realized in white, gray, and vibrant primary colors—including a hue similar to International Klein Blue—and seem to vibrate under fuzzy surfaces; they resemble monochromatic canvases that were crumpled up and destroyed, and then smoothed out and hung again. Makeshift diptychs and triptychs that challenge traditions of painting, Pinelli’s works are emblematic of ZERO as a whole, in their reliance on material, process, and a spirit of innovation to question storied conceptions of art-making and the contemporaneous cultural climate. Lucio Fontana may have summed it up most simply in his 1951 essay, “Noi continuiamo l’evoluzione del mezzo nell’arte,” when he wrote: “The transformations of the material means of life have determined man’s psychic states throughout history.” 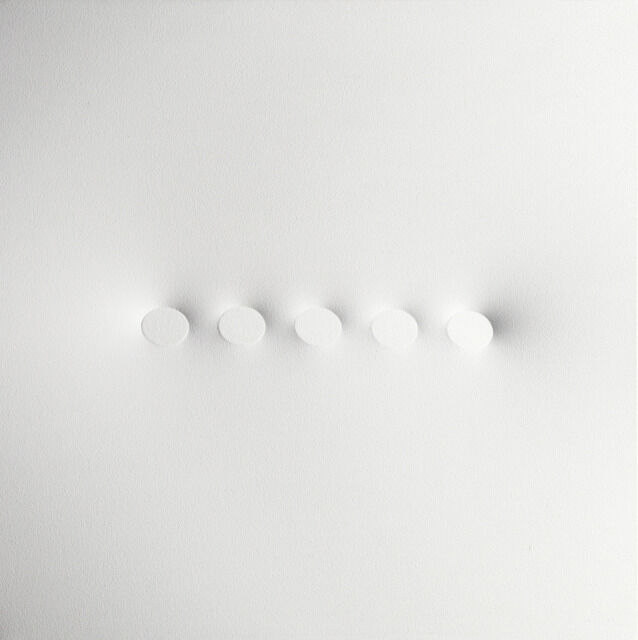 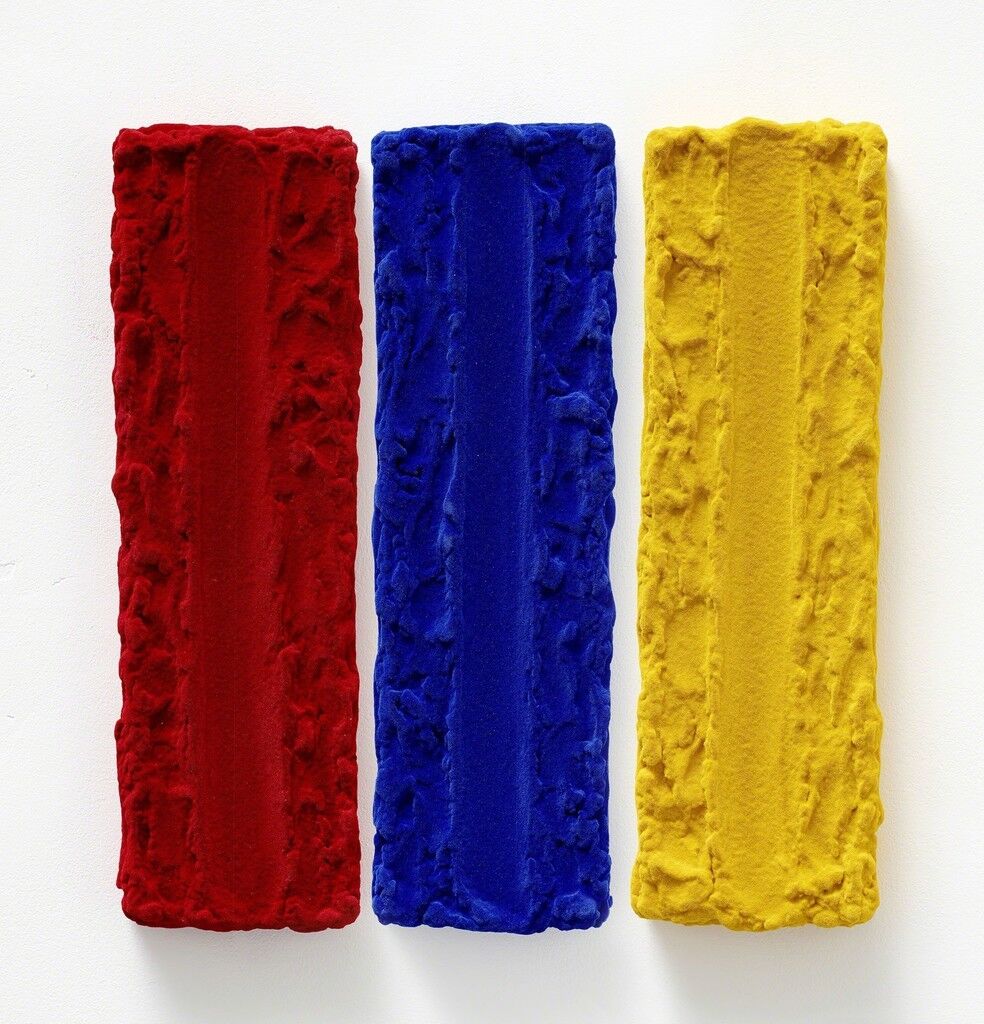