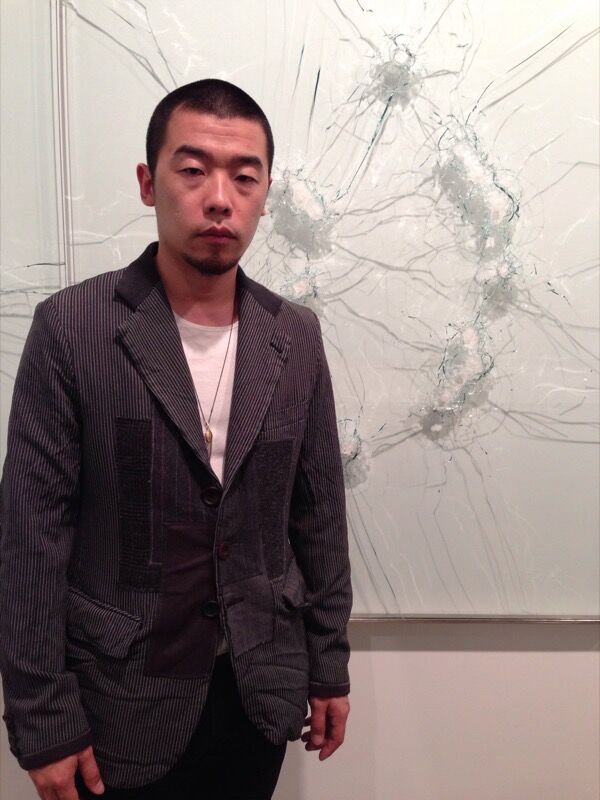 From a distance, the artist aimed and shot at sheets of thick glass, causing visible shatter marks on the surface. This violent act of physical impact itself, along with its consequent trauma frozen onto the glass, is perhaps mostly clearly read as an attempted remedy: stemmed from an urge less gratuitous than it is remedial. A few years before, the artist was involved in a car accident where his head smashed the windshield, cracking it open and yet not shattering it entirely.
His latest series “Constellations II” (2015), and exhibition of the same name at Chambers Fine Art, continues his examination of cause and effect on inanimate objects. Veering away from the three-dimensional materials that first held these mapped cracks, Zhao has this time selected the medium of oil paint to recreate the gunshot wounds. A few feet away, the paintings—rendered in only Prussian blue, Van Dyck brown, and white—are hyperreal. Up close, the canvases reveal the artist’s labored strokes to recreate an emotionally laborous event.
The paintings reveal the refractions that occur after the instant shock of a kinetic moment—but they also reveal a quiet, abstract reflection of these moments that occur so often in our daily lives. From the political decisions that inevitably create trickle-down effects in society, to the Big Bang and the creation of life itself, Zhao confronts the energy of the world around us.
In the front of the gallery, the artist has placed a mirror on the floor’s surface that appears much like a lake or a pool, reflecting the three “Constellations” paintings around it. But the image is warped—the mirror is shattered into jagged pieces, and the canvases then also appear, appropriately, fractured.
Ysabelle Cheung
“Zhao Zhao: Constellations II” is on view at Chambers Fine Art, New York, May 15–Aug. 22, 2015.
Follow Chambers Fine Art on Artsy.
Related Stories