Artist and Curator Zina Saro-Wiwa Is Planning a New Museum for Ogoniland, Nigeria 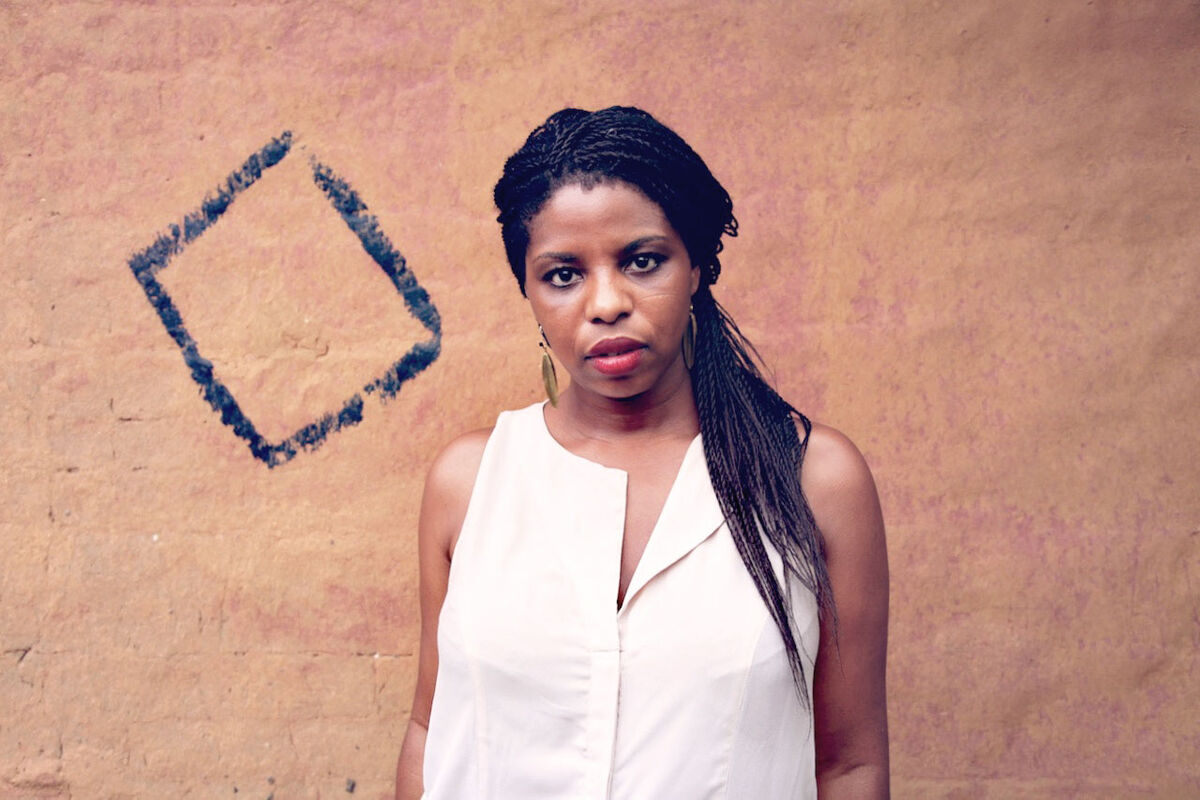 Portrait of Zina Saro-Wiwa courtesy of the artist.

MoMA is coming to the Niger Delta, and
Zina Saro-Wiwa
is going to bring it there. But this is not some offshoot of the Manhattan mecca of modern and contemporary art. In this case, MoMA stands for Museum of Mangrove Arts, and it will be a multi-part space, with galleries for local and international art, a restaurant, and a garden. Through this venue, the self-taught, British-Nigerian filmmaker, photographer, cook, and curator will crystallize the remarkable artistic career she embarked upon only in 2010—one that has led to her inclusion in exhibitions at the Brooklyn Museum and the Walther Collection Project Space in New York this year, and her upcoming solo show at Illinois’s Krannert Art Museum in November.
Her career stems from many sources, among them her ardent conviction that artists are powerful change-makers—and Saro-Wiwa wants to make change. “We can point the way to what’s actually there in the world, we can change our value systems, we can create new industries, or the basis for new industries,” she says. “That’s what art and artists can do. And that’s what I’m trying to do in Nigeria. Getting people to think about their environment differently.” 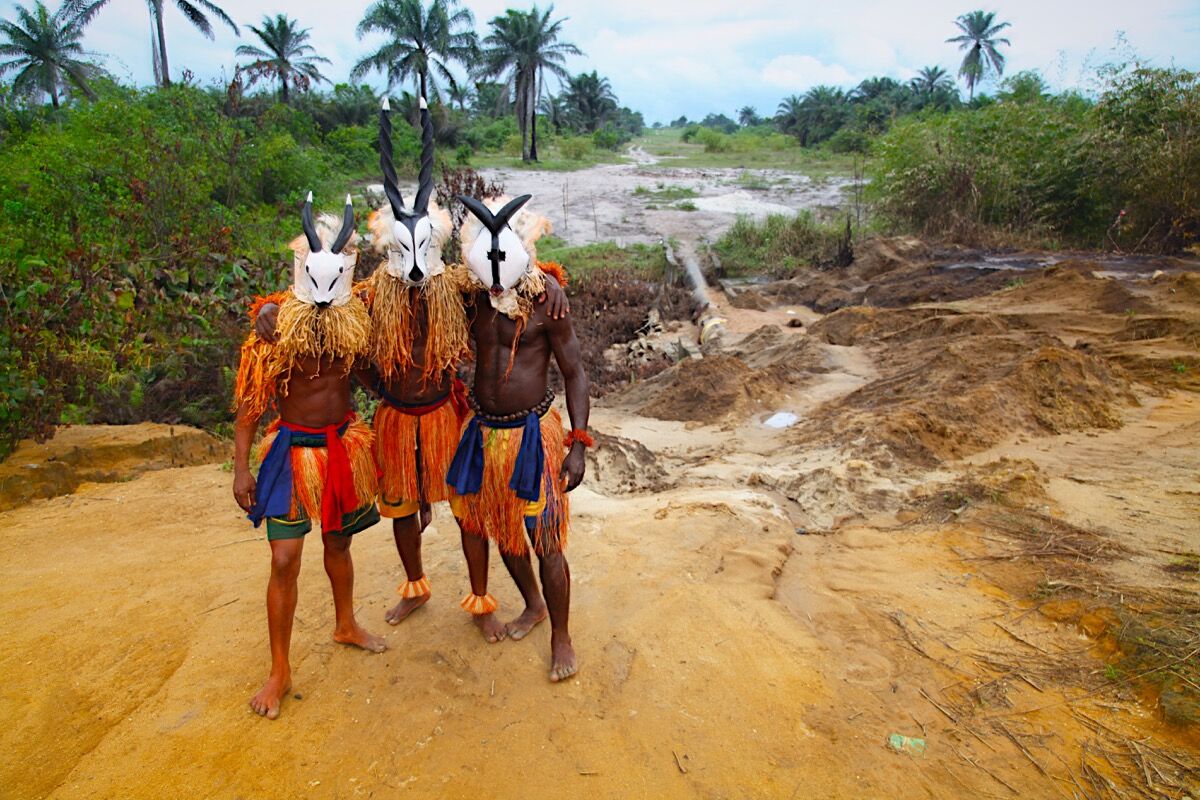 Zina Saro-Wiwa, “Brotherhood” from the Kariko Pipeline video and photo series. Image courtesy of the artist.

The environment Saro-Wiwa refers to is complex and crucial to an understanding of her work—from her plans for MoMA to a five-channel video installation called Karikpo Pipeline (2015), in which male dancers wearing antelope masks perform a playful, acrobatic masquerade on the disused pipelines, wellheads, and other infrastructure of oil extraction nestled into lush but degraded surroundings. Her career took shape in this environment: the Ogoniland region of the Niger River Delta, home of the Ogoni people, of which her family is a part. She was born in its capital city, Port Harcourt, and spent summers there, away from the U.K., where she was raised.
Ogoniland is home to oil-rich plains, which the Royal Dutch Shell oil company capitalized on from 1958 to 1994, pumping its resource without regard for its people and environment. Saro-Wiwa’s father, Ken Saro-Wiwa, took on Shell oil and its collaborator, the Nigerian government. In 1990, he founded the internationally recognized Movement for the Survival of the Ogoni People (MOSOP) to strive nonviolently for civic, economic, and environmental rights for his people. His work led, tragically, to his murder by the Nigerian government in 1995. Saro-Wiwa describes her father as “one of the inventors of Nigeria. A man of letters, a businessman, an education minister, one of the few people who really was a genuine activist and who had love for culture above everything else.”

Left:Zina Saro-Wiwa, This is my Africa. Right: Zina Saro-Wiwa’s Sarogua Mourning on the Manhattan Bridge. Images courtesy of the artist.

Advertisement
Though Saro-Wiwa acknowledges the thread that extends from her father’s work through her own, she makes clear that she is driven by her own need to do what she does, and in her own way. In 2009, she left London and a career in broadcast journalism and moved to Brooklyn, where she is now based. By the end of 2011, her award-winning documentary on Africa and Africans, This Is My Africa (2009), was being shown on HBO and at film festivals and museums worldwide, and she had completed four videos, including the one that she feels made her an artist, Sarogua Mourning (2011).
Titled after the Ogoni deity of rain and war, the piece features Saro-Wiwa shorn of her hair and enacting the role of a professional mourner, her attempt to confront and mourn her father’s death. “I think that was when I started to become an artist,” she reflects, “when I shaved my head and immersed myself and explored performance as a route to catharsis, which is what that work is about.” 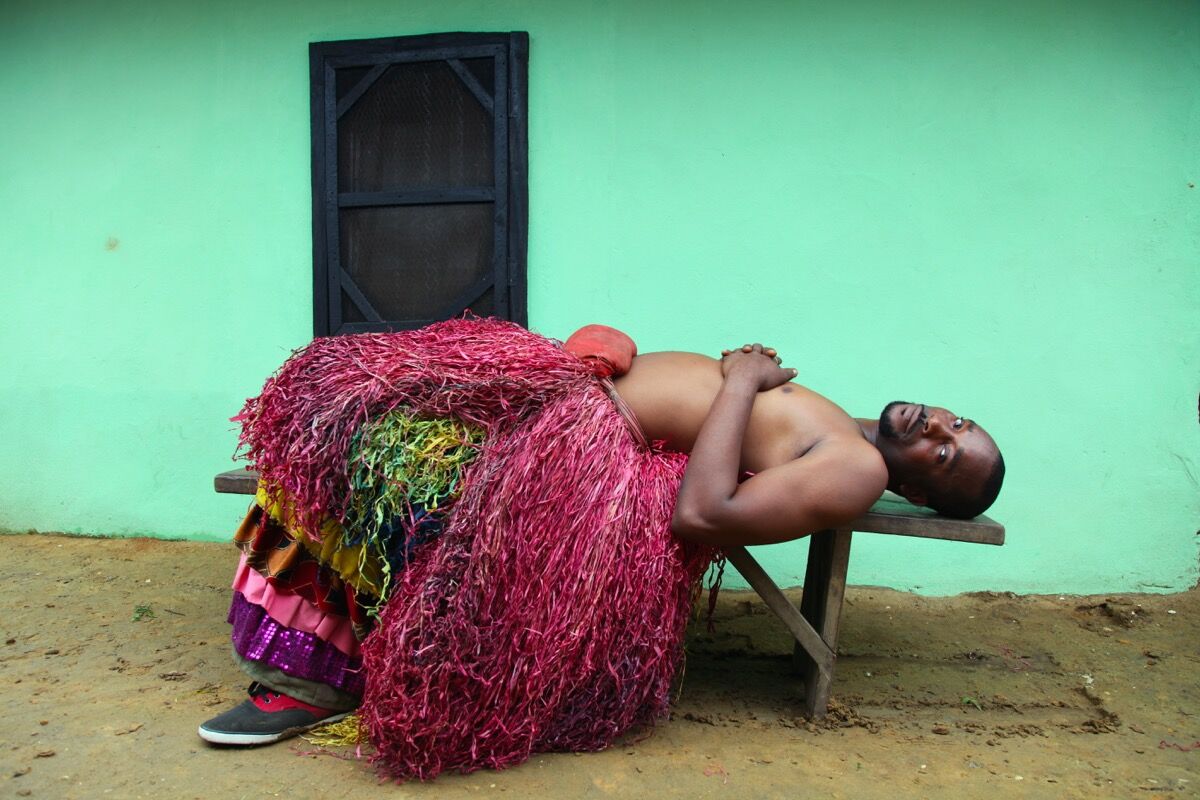 Zina Saro-Wiwa, Dream from “Men of the Ogele.” Image courtesy of the artist.

If Sarogua Mourning enabled Saro-Wiwa to see herself as an artist, it was her return in 2013 to the city of her birth and the base for her father’s work that ignited her direction and her voice. The two years she spent in Port Harcourt were an outpouring. Traversing the city and Ogoniland, she met and collaborated with people on projects like Men of the Ogele (2014), a gorgeous suite of photographs of the men of a masquerade group shown partially stripped of their costuming, and Table Manners (begun 2014), a celebration of the region’s foodways through videos of people eating, shot straight-on so as to position viewers at the meal.
She founded the Boys’ Quarters Project Space in her father’s former office building, transforming two of its rooms into galleries for showcasing the work of regional artists, while preserving his office as a memorial. She immersed herself in Ogoniland’s landscape and produce, inventing, as she describes, “whole new products, for example, pineapple and scent leaf curd, scent leaf oils, a great tiger nut and palm wine gin drink.”

At the root of all of this work is the empowerment of individuals and a refusal of the tired, tragic narratives imposed upon the Niger Delta (and, more broadly, Africa). “I’m going to think about this place differently,” she says of the region. “I’m going to value women’s work, I’m going to value our history, I’m going to think about food differently. I’m going to see the fact that there are Edens here. No one else is going to do that, only an artist will do that.”
But don’t call Saro-Wiwa an activist. She defies such well-worn designations and describes herself as a “culture-worker.” At the moment, she is working in Brooklyn, where she is busy solidifying her vision for MoMA, hoping to find a space in or around New York City in which to incubate her plans before she actualizes them in Port Harcourt. “I’m not interested in sloganeering or pat, one-dimensional responses to things,” she says. “I think that art allows us to go deeper, to access the mysterious, to look.”
Karen Kedmey
Related Stories