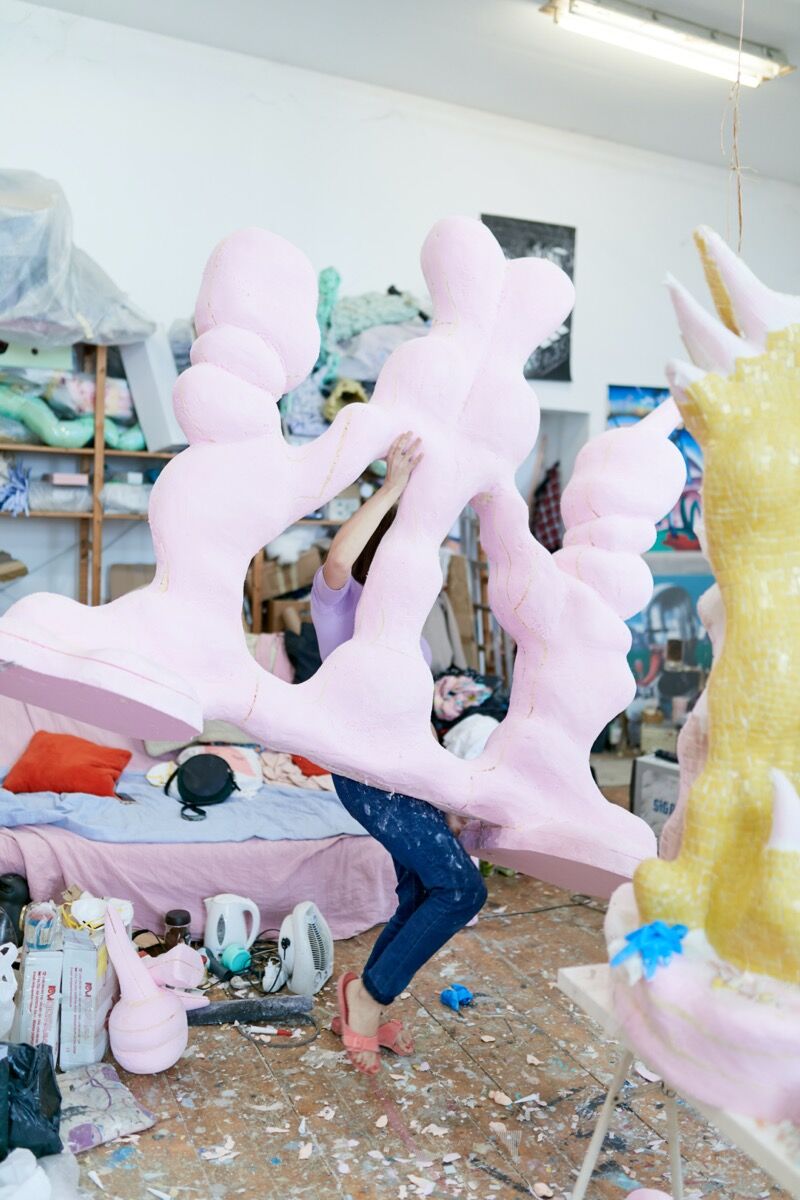 Zsófia Keresztes in her studio. Photo by Philip Hinge / Dávid Biró. Courtesy of the artist. 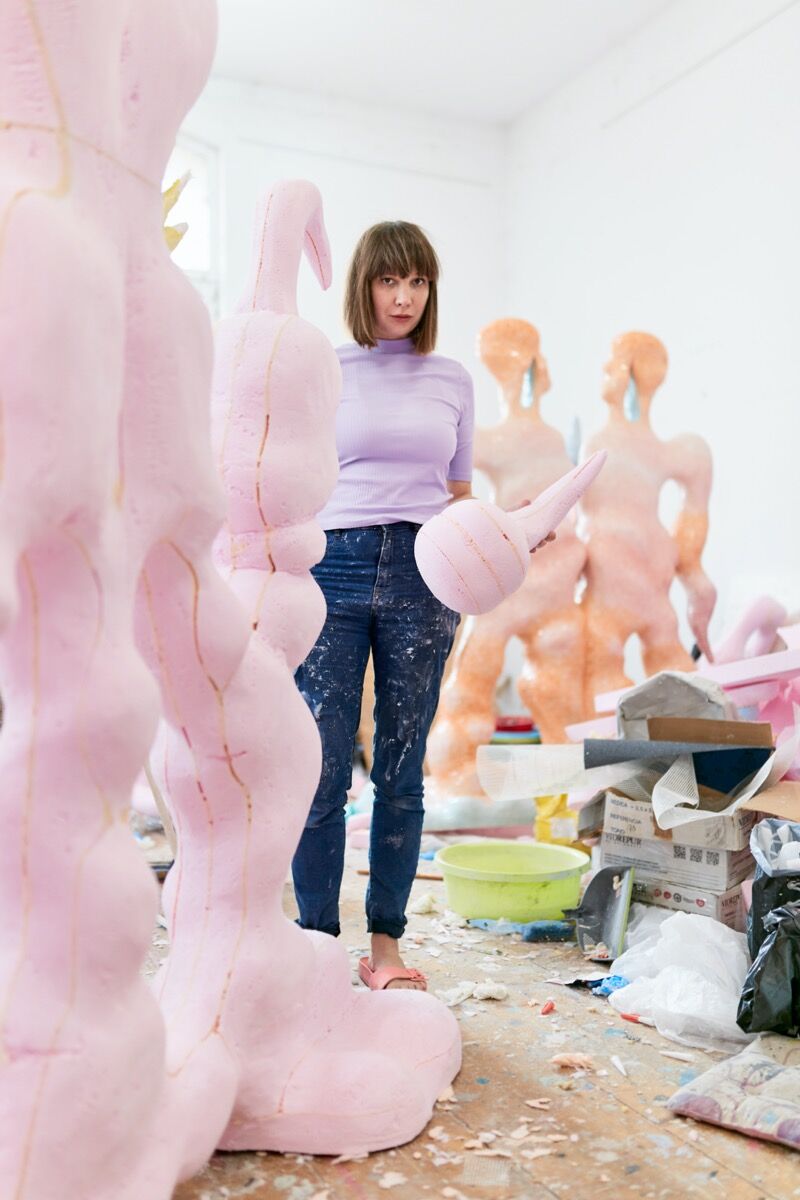 Portrait of Zsófia Keresztes by Philip Hinge / Dávid Biró. Courtesy of the artist.

Zsófia Keresztes
’s mosaic sculptures spout pretty, light blue tears—but are they genuine? For her current exhibition at Brooklyn’s Elijah Wheat Showroom (which opened on February 29th), the Hungarian artist focuses on displays of emotion that are unique to the digital realm: the feelings we can instantly share, via simple emojis or quick social media missives. The scaly surfaces of Keresztes’s works evoke the idea of “crocodile tears”; they suggest that our online performances are insincere.
Despite this slippery subject matter, Keresztes’s art is easy to enjoy. Her glass tiles in pastel and zinging citrus hues, along with her surreal, curvilinear forms, create a sumptuous, funky, feminine aesthetic. At the showroom, she’s mounted three pieces: two witchy, weeping orange spiderwebs, and a large pair of eyes sitting amid pointed breasts and gargantuan boot-covered feet. The sculptures find their spiritual predecessors in
Niki de Saint Phalle
’s buoyant figures and
Antoni Gaudí
’s fantastical architecture. Though the gallery is now closed due to the COVID-19 pandemic, the show has found a happy, fruitful second life via David Zwirner’s online viewing room “Platform: New York,” which features select works from smaller galleries. Keresztes’s popularity is rising, ironically, in the virtual realm that her art critiques. 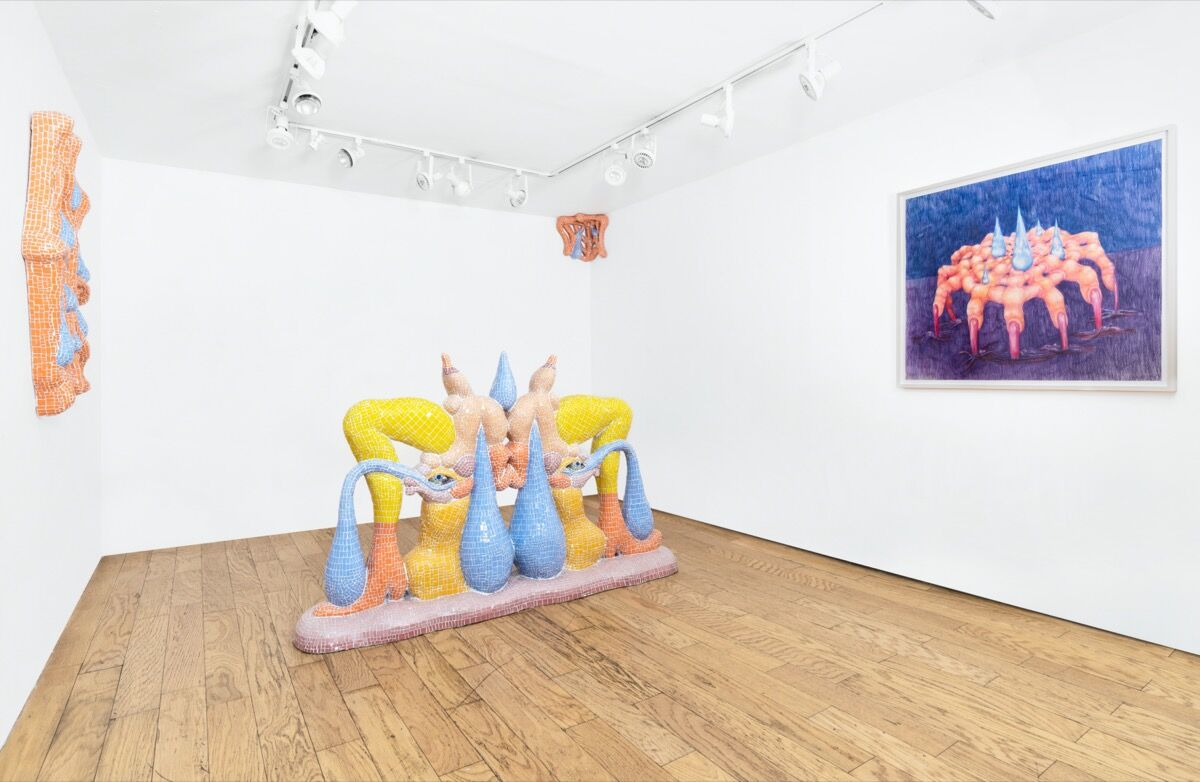 Keresztes was born in Budapest in 1985. Though she briefly went to art school in Helsinki in 2009, she’s since committed to living and working in her hometown, where she graduated from the Hungarian University of Fine Arts in 2010. “I was never enticed by the idea of moving abroad,” Keresztes recently said. While it’s important to her to be “part of a new, fresh Budapest art scene,” she also recognizes the “difficulty of building an international career from Hungary.” The Vienna-based gallery Gianni Manhattan, which began showing Keresztes’s work in 2017, has given her a bridge to the Western European art world.
Keresztes works out of Art Quarter Budapest, a former brewery that’s been transformed into artist studios. “A very inspirational community evolved within these walls,” she said, citing a number of artist and designer friends who work nearby. In her own space, Keresztes privileges spontaneity. 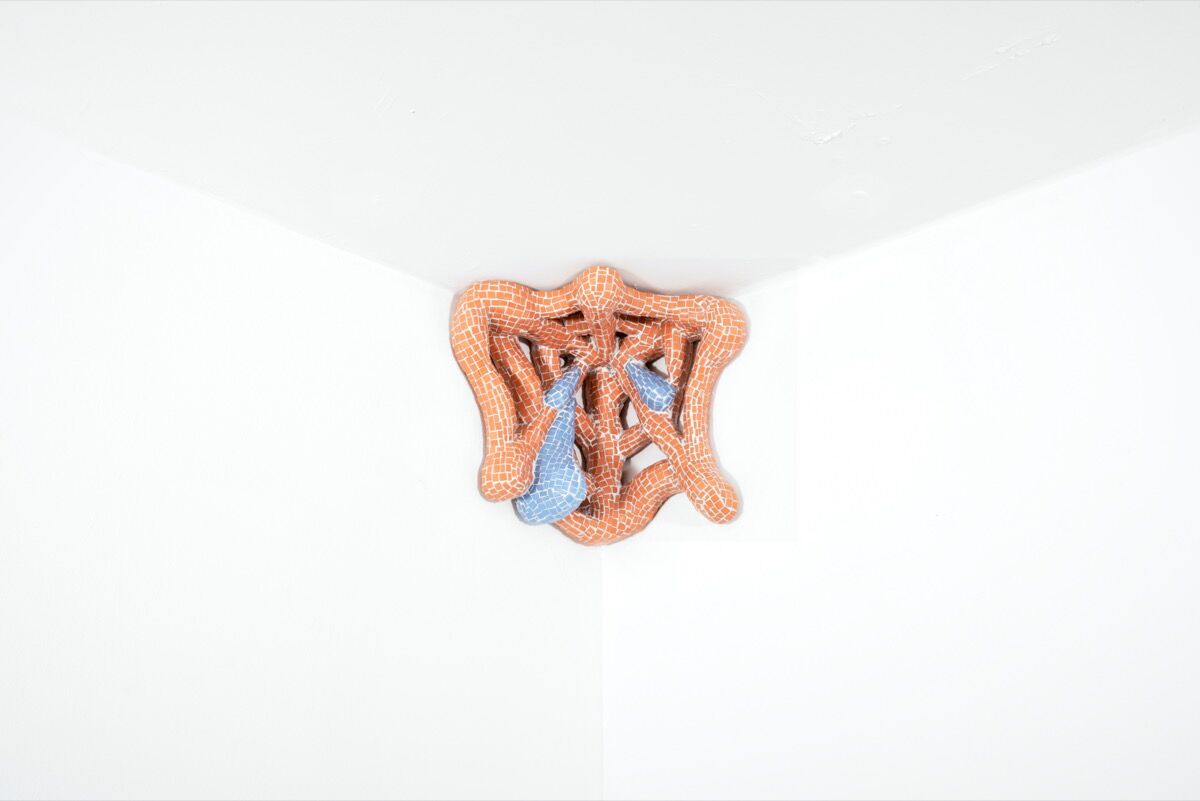 Advertisement
To begin her works, she sketches the basic shapes of her sculptures, leaving plenty of room for improvisation. She then uses these drawings as models as she carves into Styrofoam and smooths the surfaces. Finally, she coats this armature with grout and mosaic. Keresztes said she allows the “invisible lines of force determined by the shape” to guide her as she situates the glass fragments. This approach ultimately generates a sense of rhythm and flow and “the illusion of a moving surface.” Her works indeed appear to bulge and undulate before our eyes.
Keresztes noted that her recent works remind her of organs, and that she began working with glass because she wanted to capture the “glutinosity or the slipperiness” of those organic forms. The tiles are also rich with metaphor: They can suggest the pixels of the internet and the grid that’s long undergirded painting itself. As she creates her own rows and columns, Keresztes said she’s giving an endless web to her sculptures, “as if they carried a secret, unsolvable information database on their skin.” Her forms have ranged from giant yellow hooks to two bodies conjoined at the leg. Horns and stems that droop from bulbous forms evoke fruit. Occasionally, pipe or rope emerges from the mosaic, creating connective tissue between different shapes. 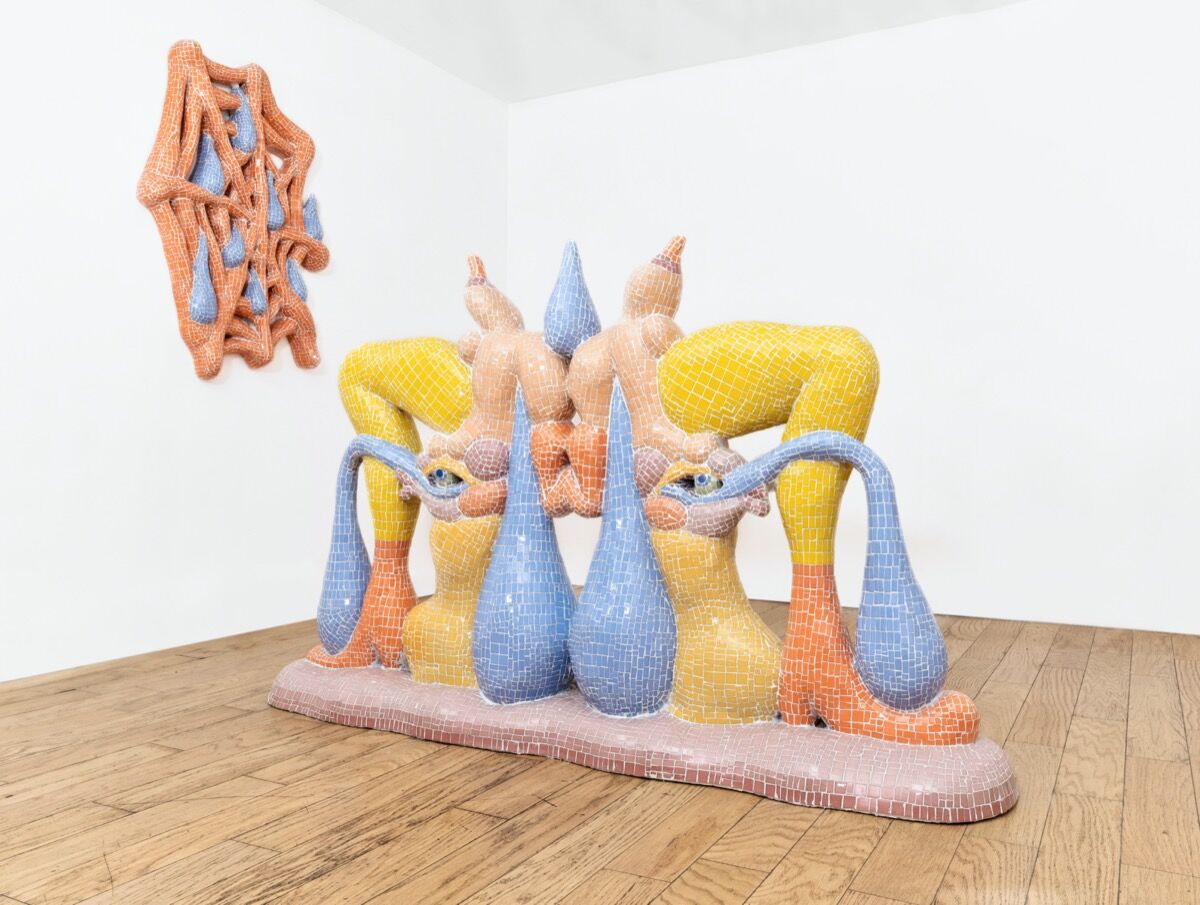 For “Stone Telling,” a 2019 exhibition at Vienna’s Kunstraum Niederoesterreich that examined the influence of feminist science fiction on contemporary art, curators Daniela Hahn and Andrea Lehsiak included a Keresztes sculpture that, they said, dominated “the exhibition space like an armed warrior or a strange goddess.” The lower part of the work, titled Totem of Hidden Accounts (2018), resembles a pair of strong legs with a gaping, pointy-toothed mouth at the center. Four detached, rotund arms hover above this lower structure, holding spear-like copper tubes. On this sculpture, the mosaic serves as a protective skin. “The figure can be interpreted as foe or ally,” the curators said. They enjoy the light, flowing aspect of Keresztes’s sculptures and see her practice as a “fantastic game of shapes.”
Carolina Wheat and Liz Nielsen, the married duo who run Elijah Wheat Showroom, discovered Keresztes’s work in 2016. Nielsen, who’s a photographer as well as a gallery owner, was participating in a residency at the Budapest Art Factory when she first visited the artist’s studio. The next year, while on their honeymoon, the couple stopped by again. “It was like she had made a monumental, quantum shift in her work,” recalled Nielsen. The pair liked the suggestiveness of Keresztes’s forms—representational but ambiguous—and how, in certain areas, the structures folded in on themselves. Keresztes’s ability to wrangle ideas about the internet and social media into sculpture intrigued them. They began scheming: How could they give her a show in Bushwick? 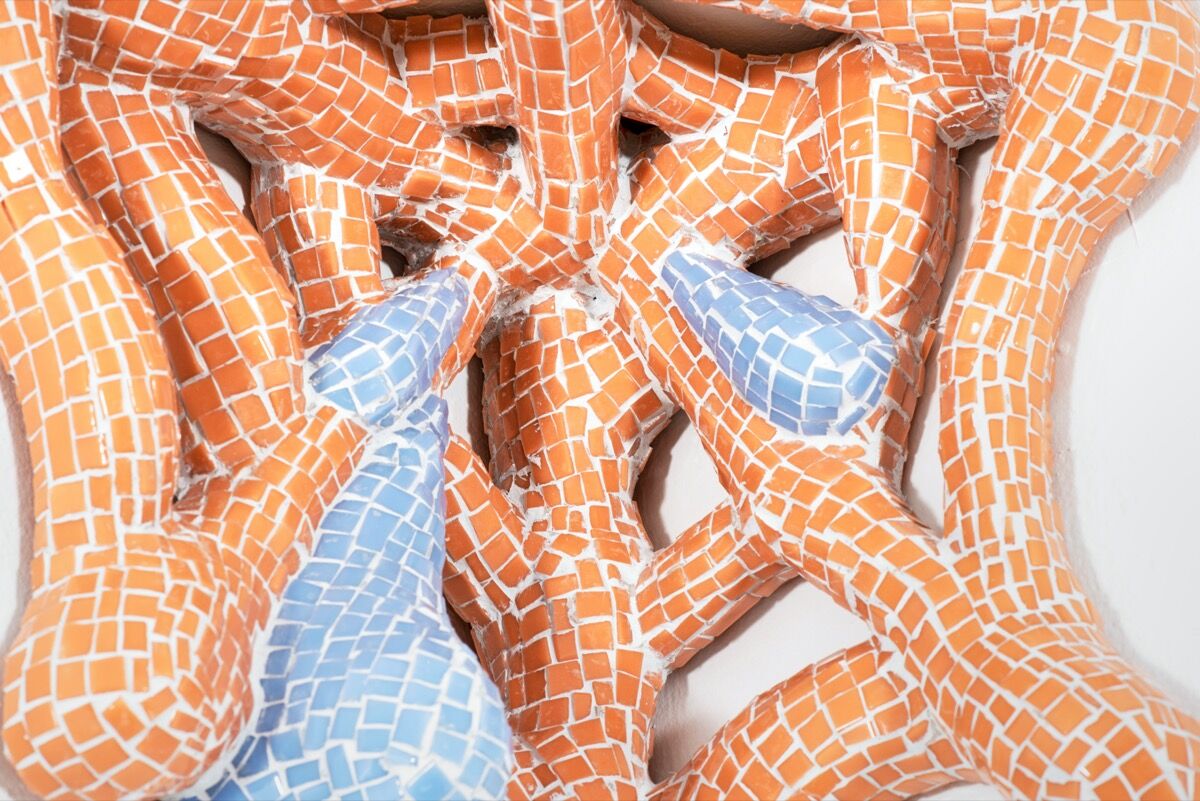 “Our idea was: What if we got Zsófia to come and build the sculptures here? That way, we’d find a studio and housing for her, like a residency,” said Wheat. For two months leading up to her current exhibition, Keresztes lived with the couple and turned the gallery into her studio, where she worked up until opening night.
Nielsen and Wheat’s gamble—and the generosity of their gallery patrons—has paid off. When I spoke to the gallerists in early April, nearly 10 inquiries had come in for one weeping spiderweb alone (Easy targets, heavy bites I, 2020, $7,000) through Zwirner’s online portal. The gallerists attributed four or five previous inquiries on the same piece to the NADA Gallery Open in early March. They said they’re grateful for the “perfect timing” they’ve had in bringing Keresztes’s first stateside show to their Bushwick space—not a phrase you often hear in the midst of a pandemic.
As for her next projects, Keresztes offered a response that characteristically mingles the digital and analog with the unapologetically lachrymose. “I am working on a new series about imaginative teardrop storage,” she said, “a larder of our cherished grievances.”
Alina Cohen
Correction: A previous version of this article stated that there were nearly ten inquiries for “Easy targets, heavy bites II”; the work in question was “Easy targets, heavy bites I,” and it costs $7,000 not $4,000.
Related Stories