The original Belgian art fair collaborates with curators Jens Hoffmann and Piper Marshall for an exhibition focusing ont he objects collected by artists. 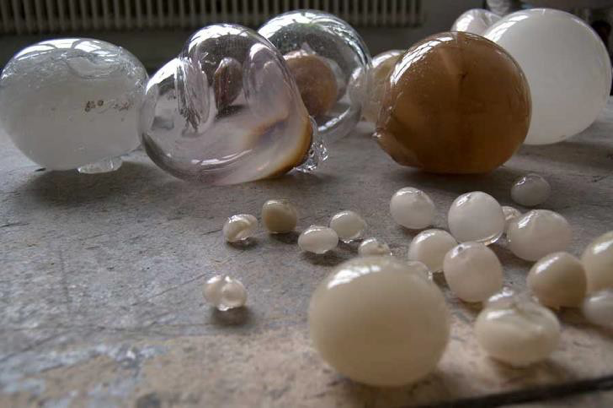 As part of its landmark 35th edition, Art Brussels announces a collaboration with internationally renowned exhibition maker Jens Hoffmann and distinguished curator and critic Piper Marshall for the flagship artistic project situated within the fair. Called Mementos: Artists’ Souvenirs, Artefacts, and other Curiosities, the exhibition brings together personal objects and artefacts from the private collections of a diverse group of artists, all of whom are represented by galleries participating in Art Brussels 2017.

Art Brussels also proudly welcomes Belfius Wealth Management as the main partner of the fair. With a collection of more than 4,300 works, Belfius possesses the largest private collection of Belgian art which spans five centuries and still continues to grow through the acquisition of contemporary art works by Belgian artists. These collaborations cement Art Brussels’ reputation as the leading contemporary art fair in April and its central position within the surge of art world activity which has increased exponentially since 1968, the year in which the fair was created.

Objects in the flagship artistic project Mementos: Artists’ Souvenirs, Artefacts, and other Curiosities include: a book kept by Josephine Meckseper from an ex-boyfriend and descendent of Victor Hugo; a bottle of sandy water collected by Kendell Geers from the meeting point of the Indian and Atlantic Ocean at full moon; and Kris Martin’s small bell without a clapper, acquired as a child and the source of inspiration for his major work now installed at the Walker Art Centre.

Installed within an intimate display designed by the Brussels-based architecture firm Lhoas Lhoas, the objects offer an alternative to the way we think about collecting, one which attaches high emotional or sentimental value to objects and is defined by individual histories and memories. Displaying these items in the context of an art fair suggests a different economy to that of the investment in art objects, whilst also revealing the sentiments and attitudes of the participating artists in a personal and highly subjective way.

Anne Vierstraete, Managing Director, Art Brussels, said:
“Over our 35 editions to date, artists are and have always been, at the centre of our programming. This highly personal project celebrates the everyday human experiences of individual artists who are championed by galleries at the fair this year. We are so delighted to have engaged with two such esteemed curators for this edition, who are working to bring the stories of the artists alive, while bringing our collective attention to the nature of collecting, and the emotional import of the items we hold most dear.”

In line with the fair’s ethos ‘from Discovery to Rediscovery’, the artistic project represents artists spanning the fair’s exciting sections: from a younger generation of artists featured in DISCOVERY and unduly underappreciated artists within the REDISCOVERY section to the internationally established artists in PRIME.

The exhibition will be on view in a space within Art Brussels’ historic location, Tour & Taxis.

Jens Hoffmann said:
“The personal objects offer singular emotional connections that might perhaps only resonate with one particular person. By inserting dissonances into the economies of art, the presentation offers an important line of inquiry into why, how, what, and when we collect.”

Piper Marshall said:
“Often we keep objects for personal reasons, for their gauge of our identity formation, for their marking of passed time, or for their status in relationship to a period in life. With this project, we investigate whether there are any links between the artists’ individual practices and these valued objects, which have been entrusted to us for the exhibition. We wanted to bring to life the stories of the artists participating in Art Brussels, through the objects they collect.”

Scenography and graphic design
The scenography of the exhibition is designed by Lhoas and Lhoas, a Brussels-based architecture firm founded in 1994. The graphic design has been entrusted to Base Design, who designed the new branding for the fair.

Institute and NICC, in partnership with Art Brussels. An accompanying programme, titled POLITICS OF THINGS, features artist interviews with the curators, cross-disciplinary discussions and readings.

Dirk Braeckman at Art Brussels
In anticipation of his commission at the Belgian Pavilion in Venice this year, curated by Eva Wittocx, photographer Dirk Braeckman will present a large range of prints from the Sisyphus series from 2005 in the lounge of fair partner Stibbe. Conferences will further develop ideas around both the Belgian Pavilion and the 57th Venice Biennale.

Belfius Wealth Management
Art Brussels is proud to welcome Belfius Wealth Management as the fair’s main partner. This collaboration perfectly complements the social and cultural commitment at Belfius as a 100% Belgian bank and insurance company. It is a commitment that is expressed in Belfius’ ongoing support of young Belgian talent and in their opening the Belfius Art Collection to the public. With a collection of more than 4,300 pieces, Belfius possesses the largest private collection of Belgian art in the country and is one of the world’s top 100 corporate collections.

Retaining its youthful profile as a discovery fair, Art Brussels, one of Europe’s original and most established fairs, celebrates its 35th edition in 2017. Since its inception, Art Brussels has evolved into one of the top European contemporary art fairs, and is a must-see in the international art calendar. Over 21 - 23 April 2017 (Preview 20 April 2017), the European capital becomes a focal point for collectors, gallerists and art lovers from all over the world. Art Brussels provides a unique opportunity to explore the artistic richness of the city, which is home today to an ever greater number of artists, galleries and curators.

Jens Hoffmann is an exhibition maker and writer. He is currently Director of Exhibitions and Public Programs at the Jewish Museum in New York, Senior Curator at Large at the Museum of Contemporary Art Detroit and Co-Artistic Director of Front International: Cleveland Triennial for Contemporary Art. Since 2007 he has been senior advisor and curator for the KADIST Art Foundation in Paris and San Francisco.
Prior to joining the Jewish Museum in 2012 he was Director of the CCA Wattis Institute for Contemporary Art in San Francisco (2007-2012) and Director of Exhibitions and Chief Curator at the Institute of Contemporary Arts in London (2003-2007). Hoffmann has curated over 50 exhibitions around the world including the 2nd San Juan Triennial (2009), the 12th Istanbul Biennial (2011) and the 9th Shanghai Biennial (2012). He was Assistant Curator for documenta X, Kassel (1997) as well Assistant Curator for the 1st Berlin Biennial (1998).
The author of several books, Hoffmann has also held several academic positions including at Goldsmiths, University of London, the Nuova Accademia di Belle Arti in Milan, California College of the Arts in San Francisco and the 4th Gwangju Biennale Curatorial Course among many others

Piper Marshall is an independent curator and writer. An integral part of her practice is research, conducted at the Department of Art History at Columbia University, where she is a third year PhD candidate. Marshall has presented her work at the Van Gogh Foundation, Arles; Paris Photo France; and the Graduate Center, CUNY.
Prior to continuing studies at Columbia University in 2014, Marshall was Curator at the Swiss Institute / Contemporary Art in New York (2007-2013). Marshall is the curator of the 12th Annual
A.I.R. Biennial (2017). She has curated the group exhibitions Life of Forms (2016); Body Bildung (2015); Couplings (2014); Descartes Daughter (2013); Meet Me At The Bottom of The Poem (2010); and Middle Man (2010). Marshall has curated monographic exhibitions of artists
Sadie Benning; John Miller, Ericka Beckman; Silke-Otto Knapp, Allan McCollum; Judith Bernstein among many others. She contributed essays to the monographs of Rochelle Goldberg and Josephine Meckseper and edited the exhibition reader for Descartes Daughter. Marshall is a frequent contributor to Texte Zur Kunst, Kaleidoscope Magazine; Art In America and artforum.com.
Press contact: UK and USA
Florence Ritter, Pelham Communications
T: +44 (0) 20 8969 3959
E: [email protected]
Press contact: Belgium and Europe
Gerrie Soetaert
T: +32 (0) 475 47 98 69
E: [email protected]
Share
../../../components/articles_grid/view.coffee